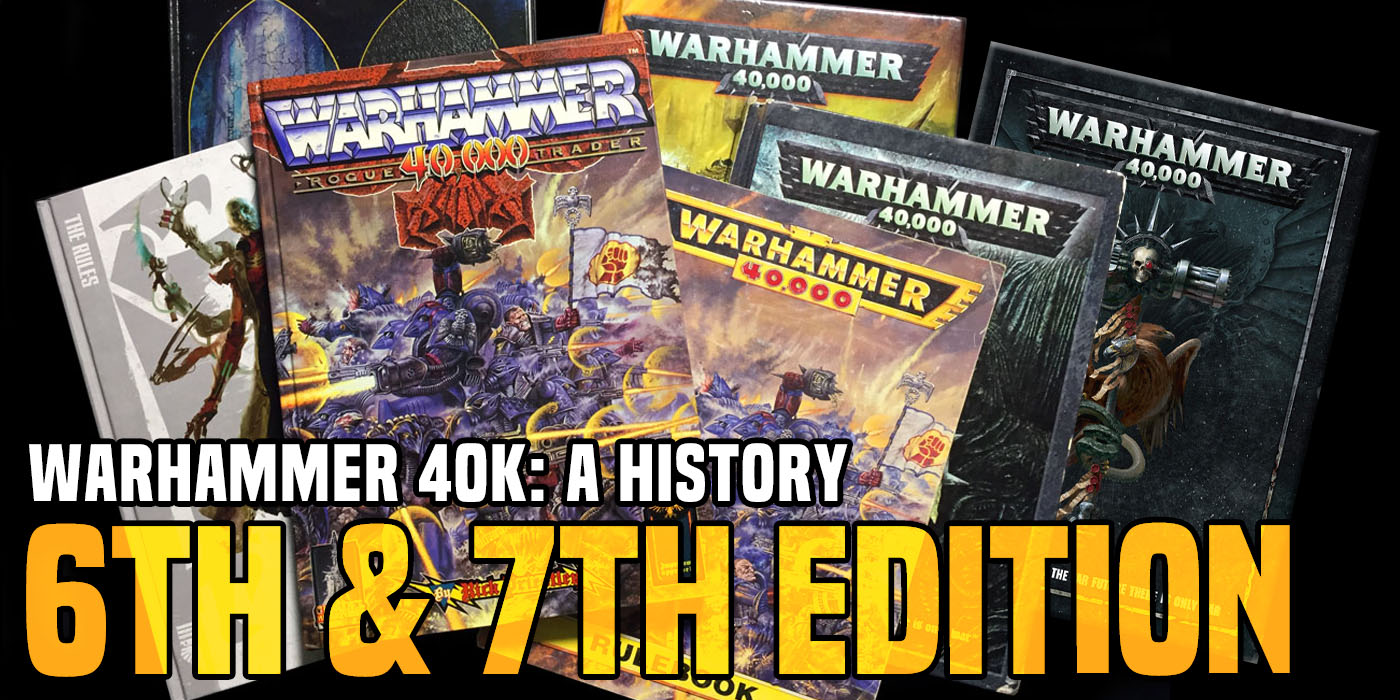 Come Grimdark enthusiasts as we cover the history and review of every edition of 40k. Today we look at 6th and 7th Editions.

We are back again with the third article in the series, this time 6th and 7th editions. Another shift in focus as well as big changes in general to the overall design of the game happened during this time and while some people consider 7th edition more akin to 6.5, for this particular article I will consider them two different editions. 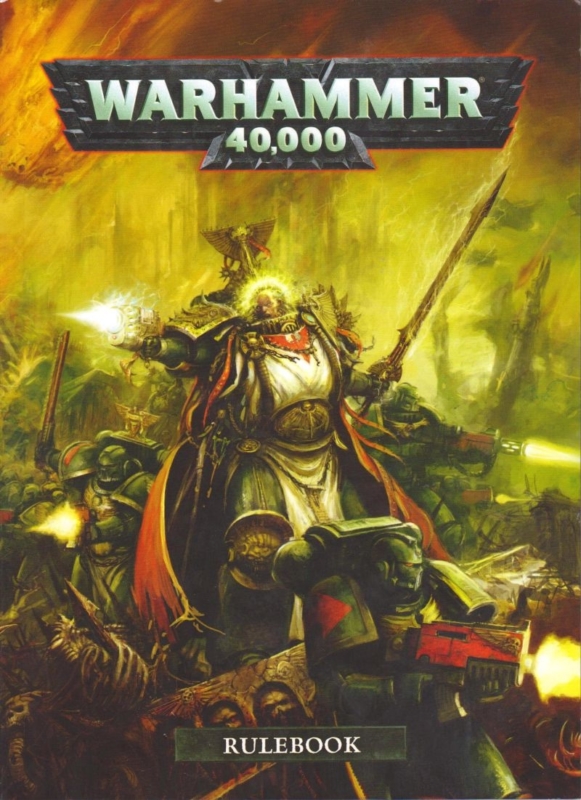 While 6th edition didn’t see as big of a change as 2nd to 3rd did, it did make some major changes to the core rules themselves as GW had changed its philosophy at this time. Instead of their norm from the earlier editions, 6th edition added rules to the game instead of either removing them or streamlining them. 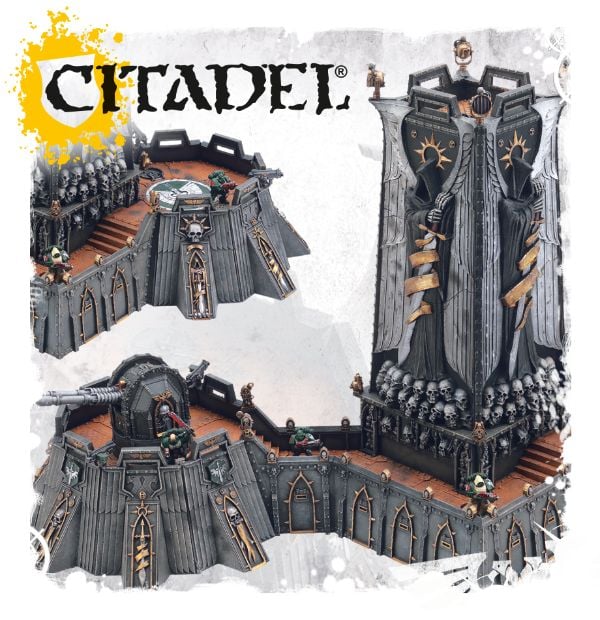 The big changes that came about in 6th were many. One of the major ones were the changes to Psykers and Psychic Powers. Instead of having just unique powers for different armies, all Psykers could now utilise a shared pool of powers called the Psychic Disciplines. There were 5 of them in total, however they weren’t all open to all Psykers in the game. Some Psykers could use a few, others could pick from any, however everyone more or less used the same powers on top of their own. Another noticeable change was the focus on random over guaranteed, instead of buying your Psychic Powers like you used to, you now rolled for them. Instead of Charging 6” or 12” you rolled 2D6 and so on. Overwatch returned in a way, mainly in name only, from 2nd edition, allowing ranged units to defend themselves against charging enemy units. We also saw the comeback of Supplements, game expansions were released, Fortifications could now be bought as part of your army, the CAD, Combined Arms Detachment, and the Allied Matrix came about, Flyers were now a thing, so overall it became obvious that GW wanted to increase the scale of the game both in terms of rules and armies. 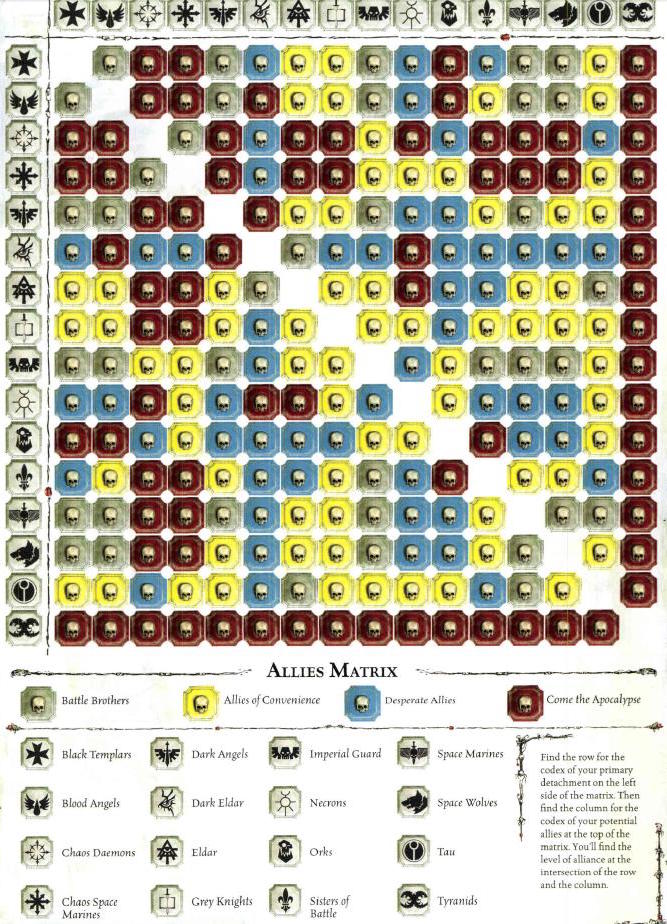 6th edition gave us a lot of cool new stuff, armies now had access to significantly wider pool of options, be it from Allies or Fortifications, or even Super Heavy Vehicles later on when Escalation was released. With the introduction of Psychic Disciplines, the average amount of powers players could use skyrocketed, meaning that more tactics opened up. 6th edition also saw a solid release of Codices, many armies getting theirs finally updated from their 4th edition Codex, such as Daemons, Eldar, Chaos Space Marines and Dark Angels, we also saw small “Ally” factions being introduced. Legion of the Damned, Inquisition and Tempestus Scions. Supplements added options for players, such as the Iyanden book for Eldar allowed players to make Wraith themed Armies while books Black Legion and Clan Raukaan allowed for thematic armies based on those Legions. Overall, the variety had changed from relatively “stagnant” 5th edition as the base game didn’t really offer that much variety in terms of missions and scenarios while 6th offered now double the options. 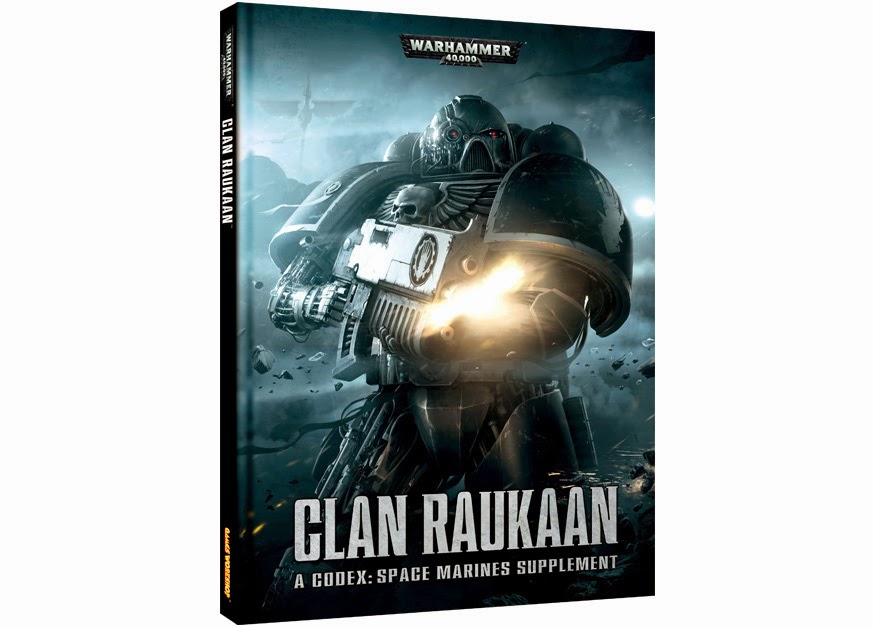 While more options were nice, there was a flood of them. Not only that, there was simply an incredible amount of factors to consider. The game’s balance suffered harshly during 6th edition as some Codices received significantly better rules than others, the Supplements weren’t given to everyone, meaning that some armies simply got additional rules on top of their normal ones. The Ally Matrix wasn’t fair either as Imperium could ally with most of its own armies and as they are the largest faction could easily make better armies than other factions in the game.

Finally, the introduction of Super Heavies into the game, especially the Imperial Knights, strained the balance even more. Not everyone had access to them as some armies simply were never given official models or they were limited to Forge World. Meanwhile Super Heavies that could be taken usually were powerful enough to take on an army by itself, easily taking out the units that could damage it on the first few turns and then remaining invincible to the rest of the opponent’s army. 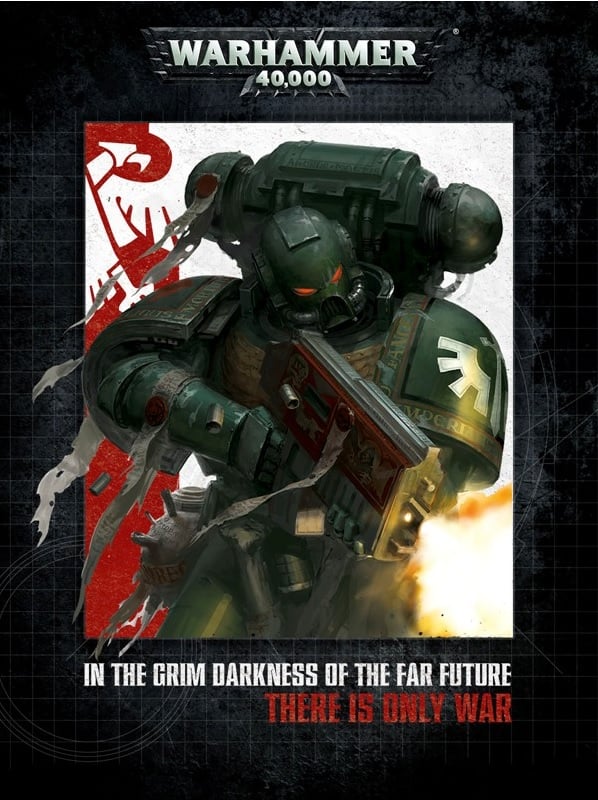 As can be seen with the years it existed, the short life span compared to earlier editions makes people refer to 7th edition every now and then as 6.5 for this reason. On average a rulebook was meant to work for 4 years, now it was only up for 2, and then 3. Counting the smaller changes that 7th overall did, it is not surprising that this edition was considered simply an updated 6th edition as opposed to a whole new edition. 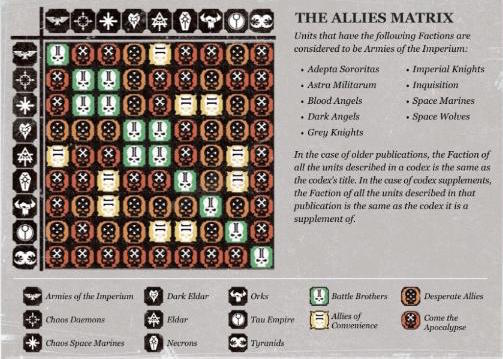 An Update or Something New?

7th edition increased the scale even more than 6th. While not adding new rules per se as opposed to simply making expansion rules core rules and changing how army building worked, the game was now bigger than it had ever been from just the core rulebook. Super Heavies were no longer an expansion book that you had to ask if your opponent was up to play, instead they were now as much part of the game as Troops and Elite units were. Destroyer Weapons, or D-Weapons, were brought in from Apocalypse, armies could now take multiple CADs now, meaning that for every 1 HQ and 2 Troops a player brought, they could bring 3 of the other “Specialist” choices, Fast Attack, Heavy Support and Elites. Allied Matrix was streamlined for Imperium to the point where all Imperial armies could ally with each other as “Battle Brothers”, meaning that they didn’t gain any penalties no matter who they allied with. However, the core rules themselves stayed relatively the same. Movement, Shooting and Assaults worked like they did with 6th, however the Psychic Phase was now introduced, again continuing with their new design philosophy of adding rules as opposed to removing them or streamlining as they used to.

7th edition had become a grand in scale, armies were now large with giant monsters, vehicles and aircraft filling the tables. Great selections of new units were introduced, and now with significantly more open armies available, players could go to town with their collections. With greater freedom of Allies, players could now make more thematic armies, such as Word Bearer armies with Daemons as one greater force, Inquisition and Imperial Guard working together and so on. The game was now about as open as Rogue Trader in terms of army composition.

And as about as welcoming and easy to get into. 7th edition saw the release of incredible amount of books up to the point of everyone getting at least one book, alongside new armies being released, but it also saw supplements being thrown out at an incredible rate alongside campaigns. In the span of 3 years, the game saw almost as many books being released as 3rd, 4th and 5th edition saw in TOTAL. 7th saw the release of 50 rulebooks of various sources while 3rd, 4th and 5th saw 51.

On top of this, the game also saw the now infamous “Decurion” as most referred to it as, based on the name Necrons called theirs as they were the first one to receive it; a formation based army as opposed to standard CAD. Basically instead of filling slots, players could opt to take specific units dictated by a Datasheet. Taking the specific units limited your choices, however they gave benefits to the units that were chosen. However, this was horrendously unbalanced, for example where Marines could take theirs with relatively standard options for less than 1000pts minimum and then receive free Transports, Orks couldn’t fit theirs in less than 1500pts and mainly received their standard buffs that they already got with only one additional benefit given while severely needing to go out their way to take the formation. 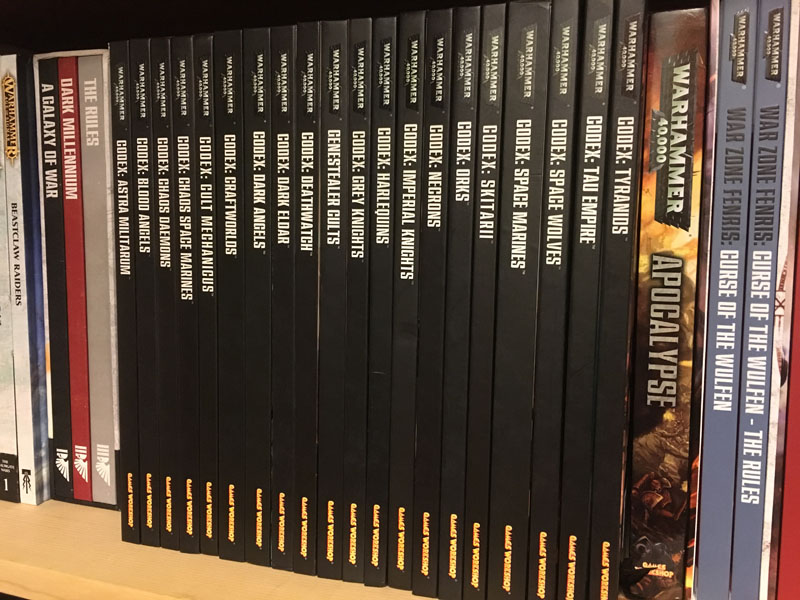 An Era Comes to an End

As could probably be noticed, the negatives from this period outweigh the positives and it was probably for these reasons that we saw the release of 8th edition in the first place. 7th edition had received a great deal of negativity from the playerbase. There was a massive dominance for certain armies, leaving other armies to gather dust on the shelf as they simply couldn’t compete against the top armies, the game had become a bloated mass, that was difficult to learn and get into. GW realized this, and as such 8th edition came to be to solve these issues, however that is another article.

GW did however set up the transition to 8th Edition with the largest step forward for the game’s narrative in decades. The Gathering Storm trilogy.

As we look back from our vantage of 8th Edition, the lasting legacy from the 7th era are the Super Heavies in the game. Baneblades, Lord of Skull, Titans, all of them normally were limited to Apocalypse, however now they are as much part of the game as anything else. We saw for a brief moment GW try and bring back the formations with the introduction of Specialist Detachments in the Vigilus narrative campaign, however these again weren’t too well received as people still had 7th edition fresh in their memory.

However, 7th edition still exists, though not as its main 40k version, but Horus Heresy. 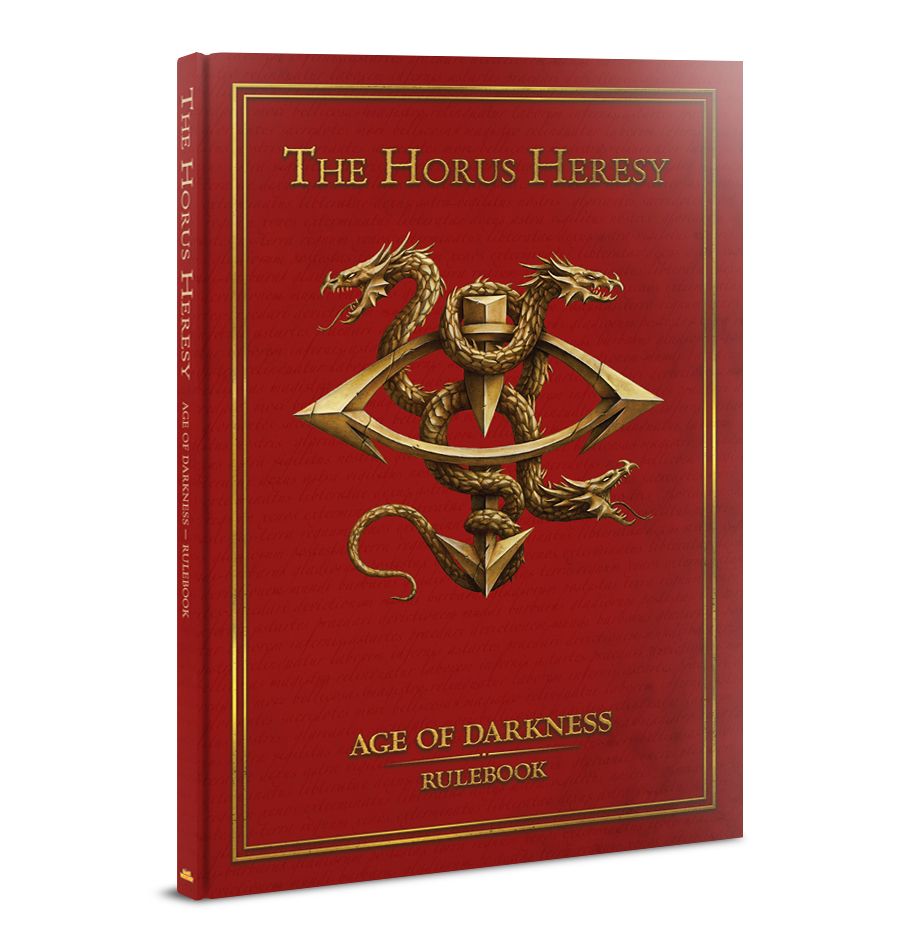 Forge World still uses 7th edition rules for their Horus Heresy, however it is modified to balance out and remove as many of the core issues the game had at the time, on top of just not having as many books and combinations to pull from, leaving it as a more stable core ruleset.

Let us know how you feel about the edition as a whole in the comments. 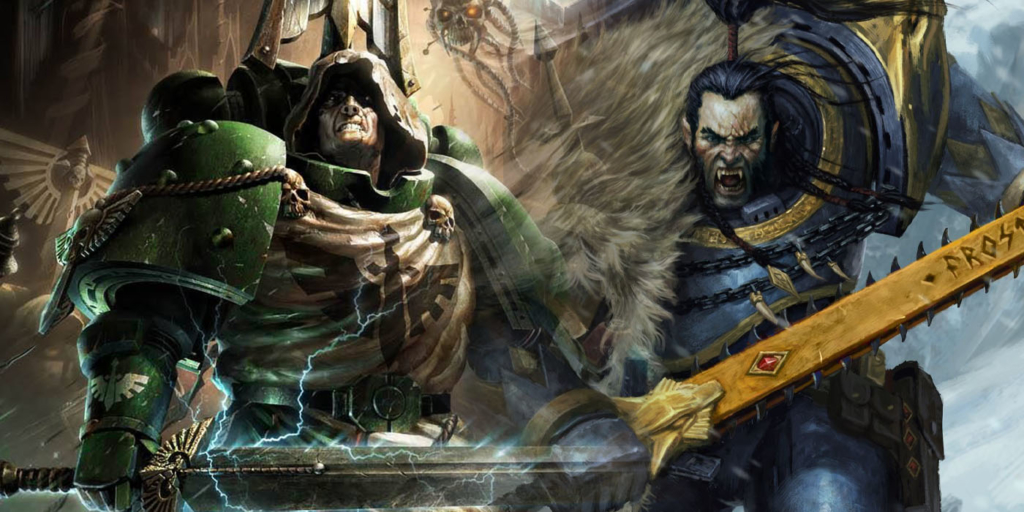