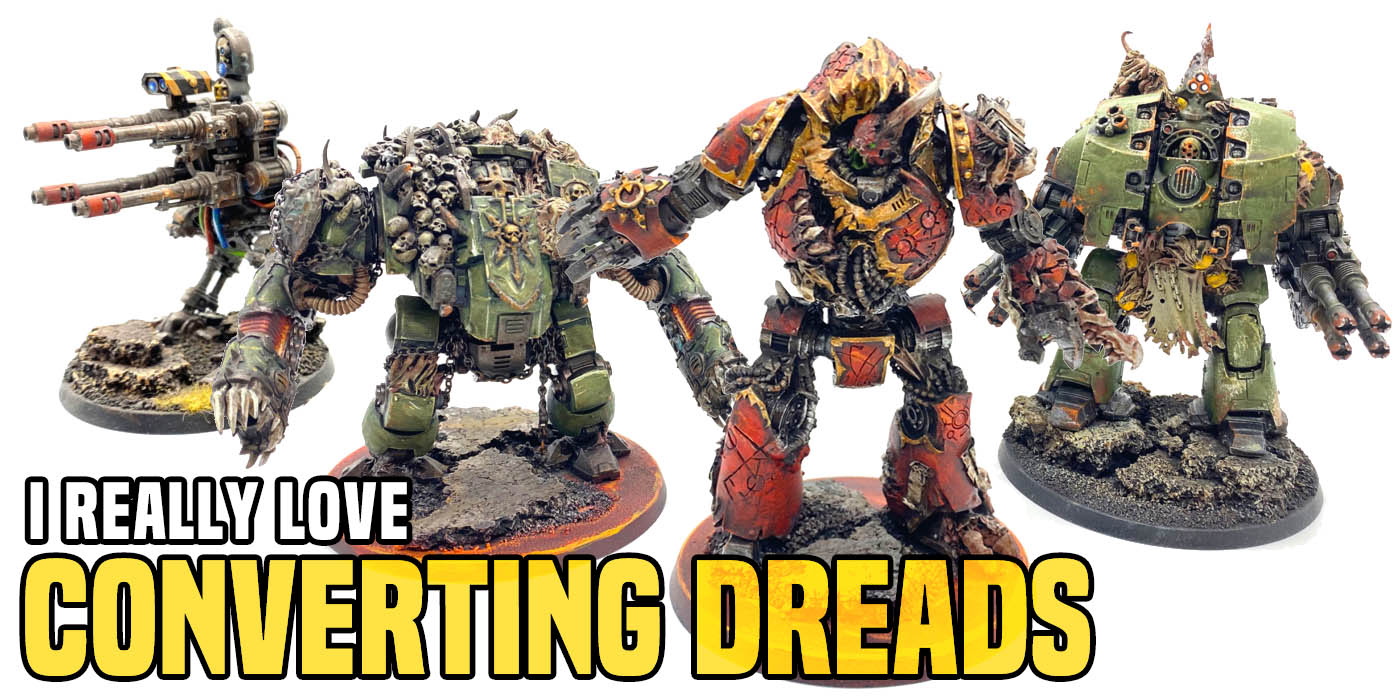 Goatboy here and I’m going to show you how much I love Dreadnoughts.  In fact it is right up there with Daemon Princes for a unit I just enjoy painting.

Heck – I need to make 3 Double PF Helbrutes to finish off a really dumb idea for a Close Combat Red Corsairs Dreadnought army.  I obviously have hobby issues haha.  I know I got more laying around in the garage as I got some for my old Space Goats army.  I have also sold a few – a random Leviathan to an old client that liked the double storm cannon monster and a few others.  Let’s get started on showing you some Dreadnought nonsense. 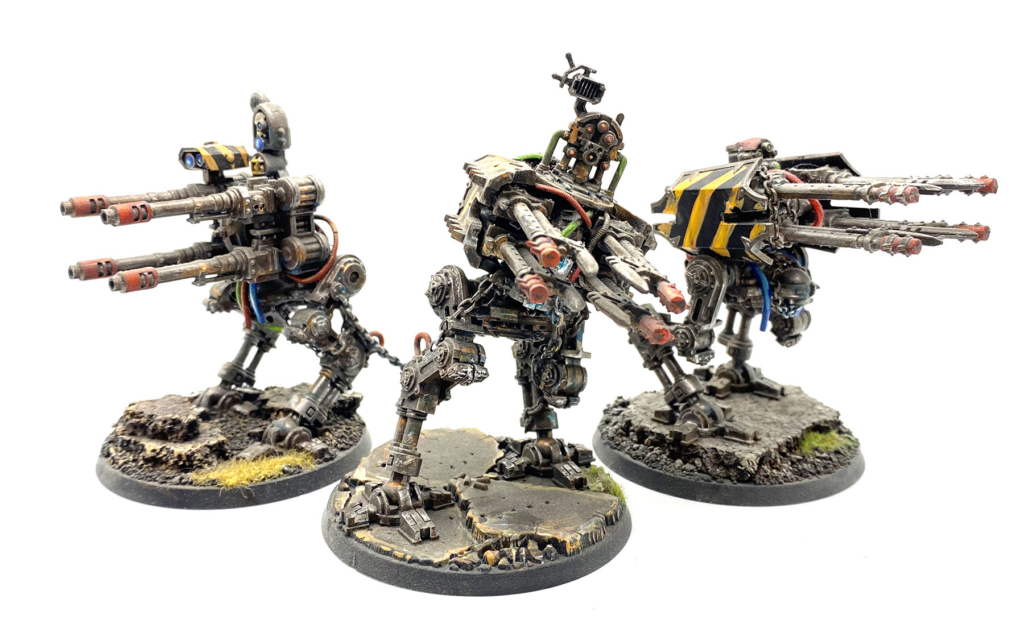 This was a conversion for a counts as Grey Knight army back in the 5th edition days.  I wanted them to be Dark Mechanicus chicken walkers and they were a terror when throwing out 4 Strength 8 reroll to hit shots were the bees knees.  I remember many a game with these guys hiding behind a Twin Linked Heavy Bolter Razorback providing cover and throwing out damage. 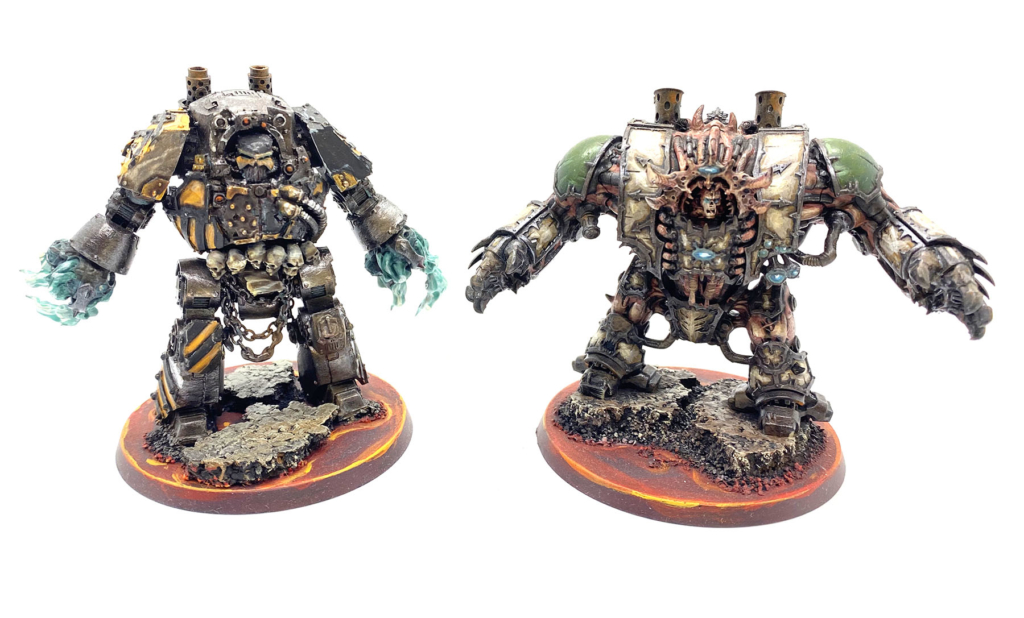 The left one was a test for a double soul Burner Iron Warriors Contemptor.  I just liked the model and saw this conversion online and wanted to do one. The other was for an old 7th edition detachment that needed a helbrute.  I could paint him up Red and then I just need 2 Helbrutes.  It’s a thought but its fun. 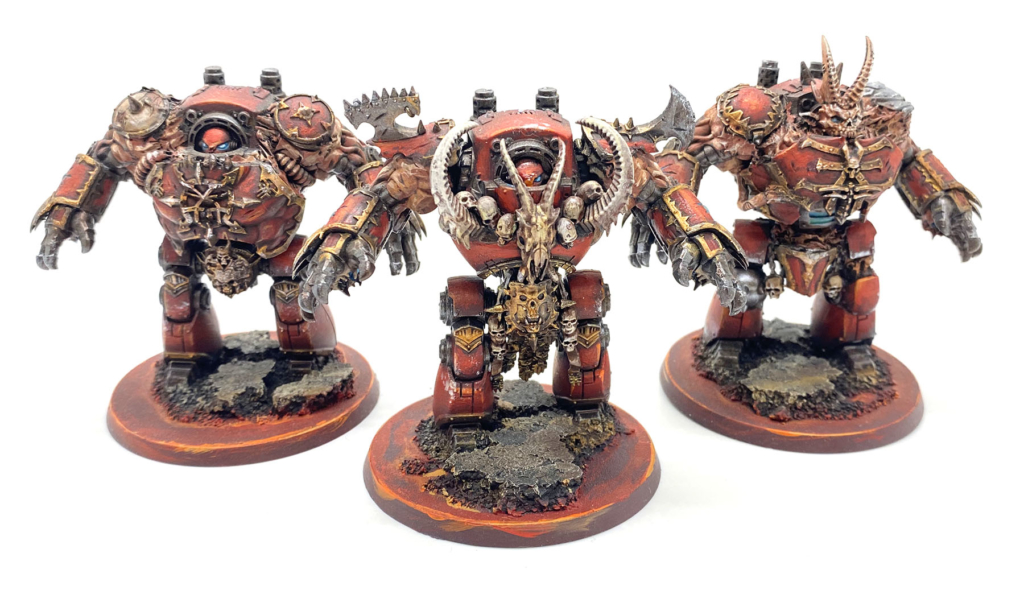 First batch of Red Corsairs Dreadnoughts/Alpha Legion in Disguise double Fist/Soul Burner Contemptors.  I used these guys to throw out mortal wounds like a boss during an LVO a few years ago.  Heck I had a stream game vs a good friend where his dice were awful and mine were Goatboy level nonsense.  Lots of 5+ inv saves made in that game.  I still love these guys and have a fun Dreadnought Rush list I do enjoy throwing out there. 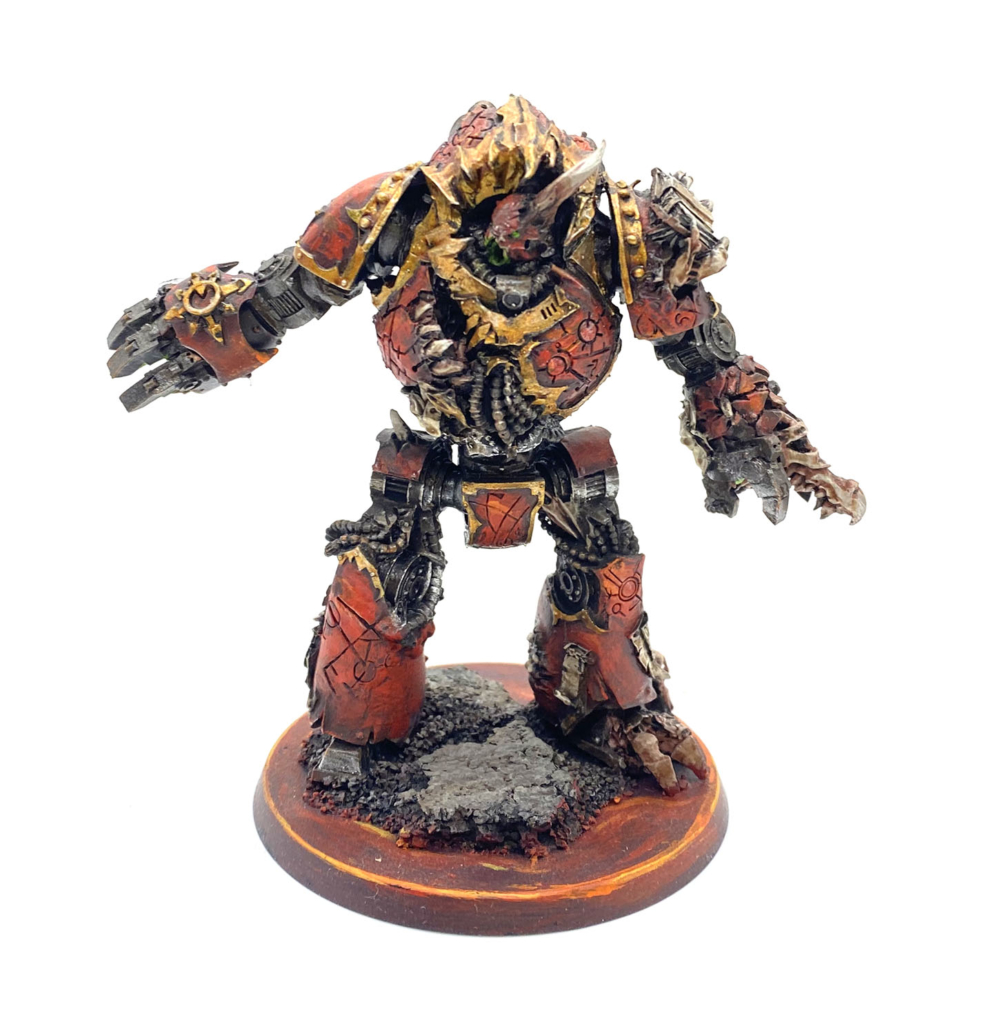 Before the rule of 3 I was getting ready to throw out 4 Soul Burner Dreadnoughts and thus I wanted the Horus Heresy possessed Dreadnought.  I still like this guy and will pull him out to replace one of the 3 from time to time. 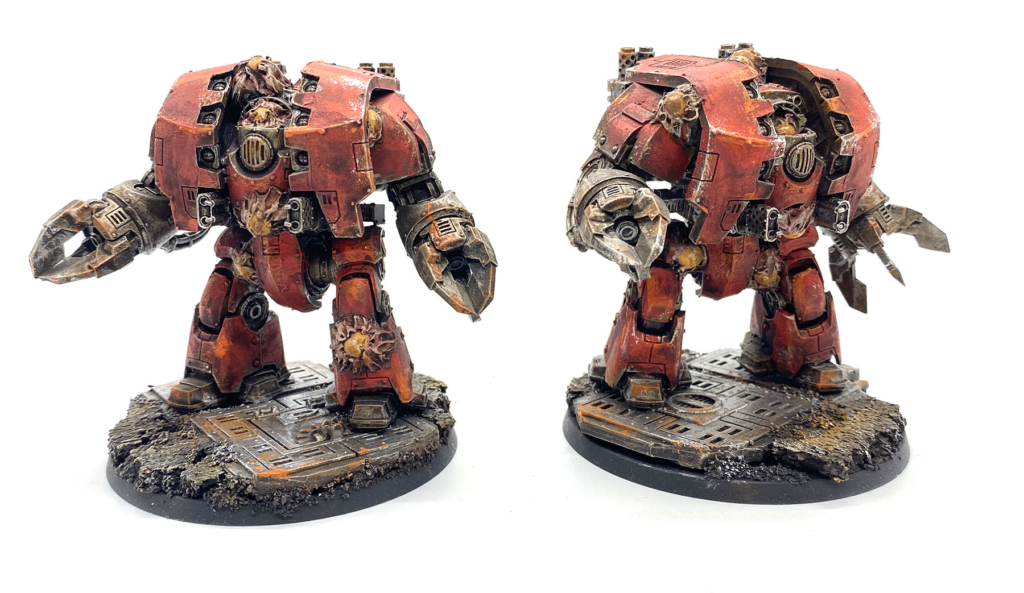 My chunky bois – I love to run them as just close combat monsters.  If it wasn’t for the BroHammer list I think we could bring the points down on these guys.  They just seem so beefy and I enjoy building and painting this model. 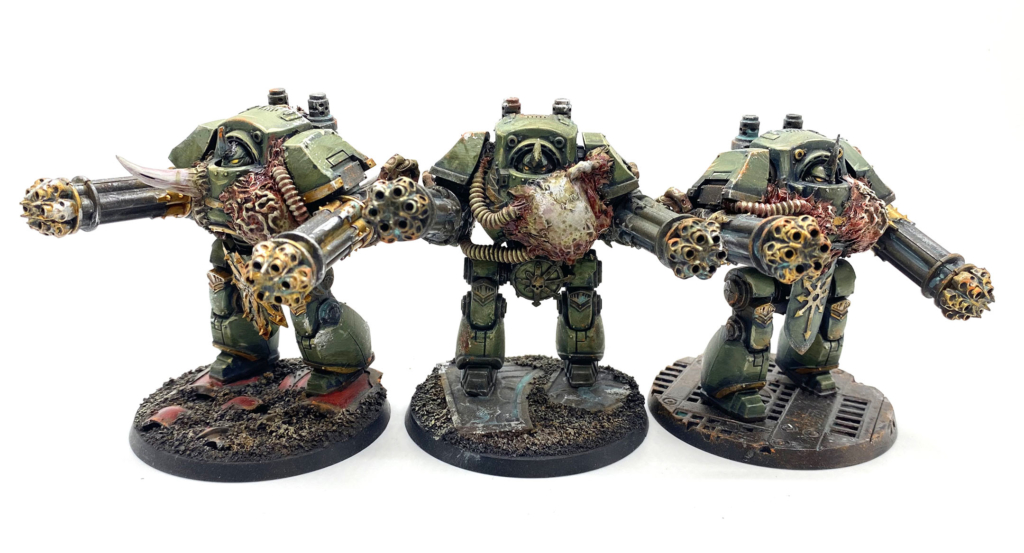 Here are the other 3 fun dreadnoughts for my Death Guard army.  Double Butcher  Cannon Contemptors are pretty good for Death Guard as it gives you a decent range shooting platform.  I wanted to do a bunch of gross growth Dreads so I used green stuff, the Tentacle Maker, and parts from the Nurgle Riders from AOS.  These guys are super fun to paint and relaxing. 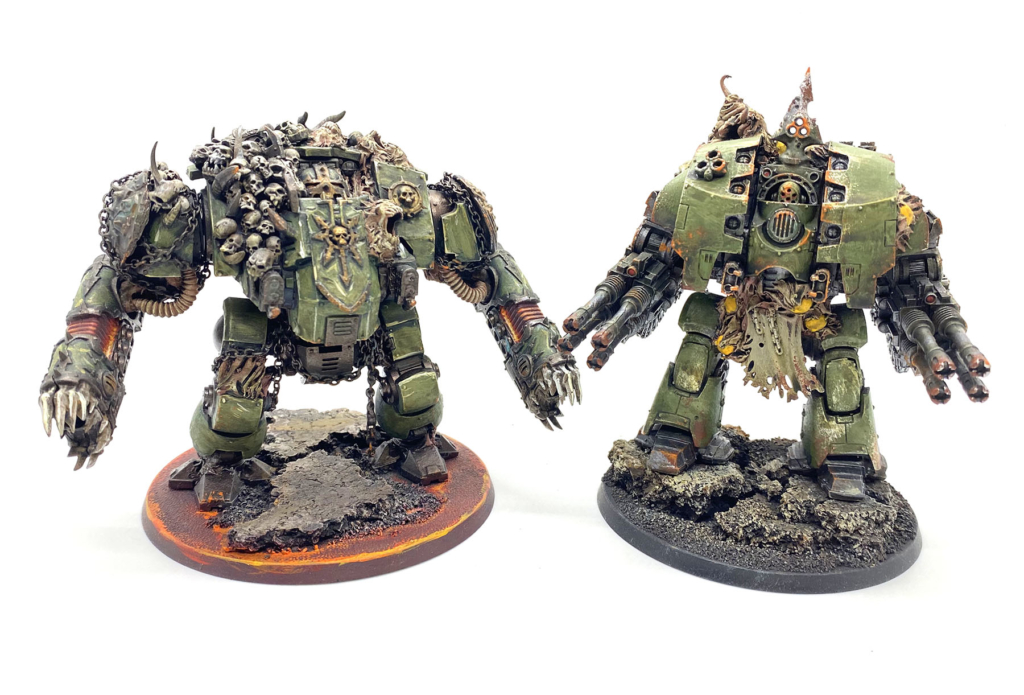 I wanted to do a conversion on the Redemptor Dreadnought and thought – make it like a crazy Leviathan with Soulburner Pertards and gross stuff.  Thus the monster to your left.  The other is another fun Death Guard Leviathan with double Butcher Cannon Arrays and a Nurgle buddy riding dirty.  I have used this guy once and his expensive butt didn’t live up to what I wanted – but I still love him.

Right now on the Dreadnought front I think I will go find 2 more Helbrutes and see if I can convert some from the Dark Vengeance box set.  I think I got two that survived my Daemon Prince building a geddon a few years ago and just need to figure out how to get the right army working right.

Oh wait – I did do one more Dreadnought – a good guy one. 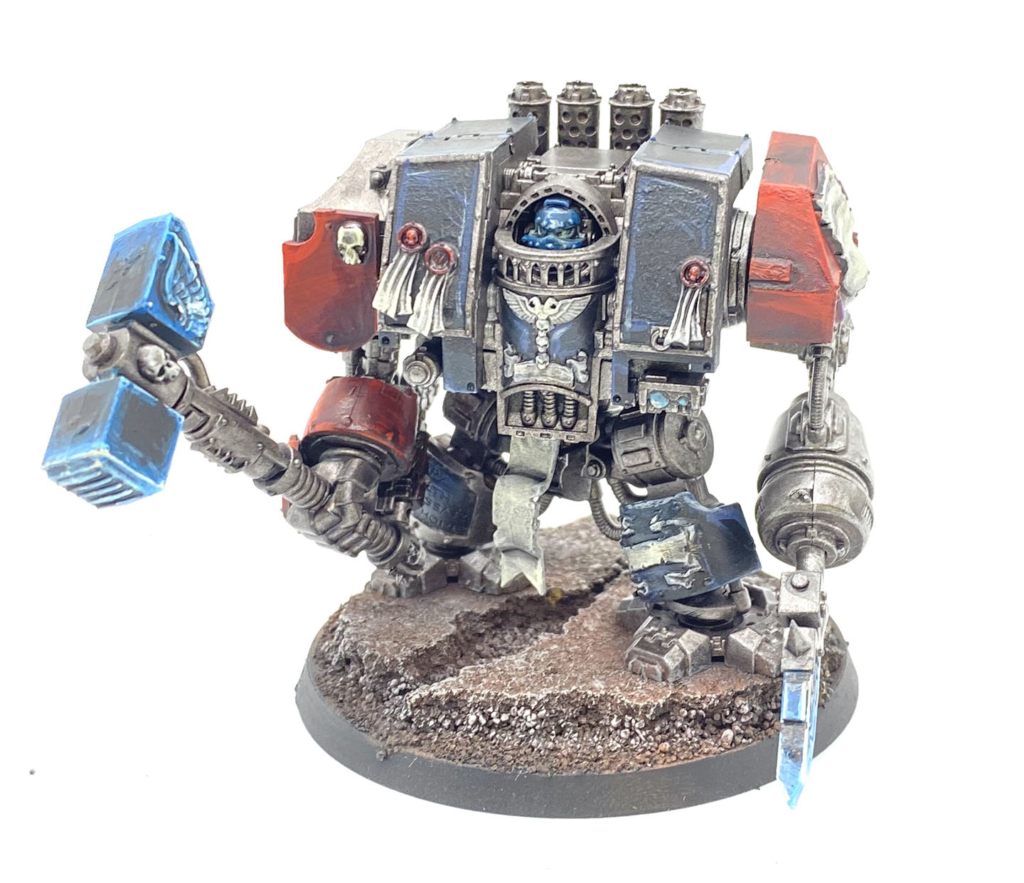 I went digging through old models and got this one built up as an add on to my whole Custode Bikers/BA army I like to play from time to time.  Super simple combo build off of a Ven dread kit, hammer from a Dreadnknight, and old BA Libbie Dread parts I still had.