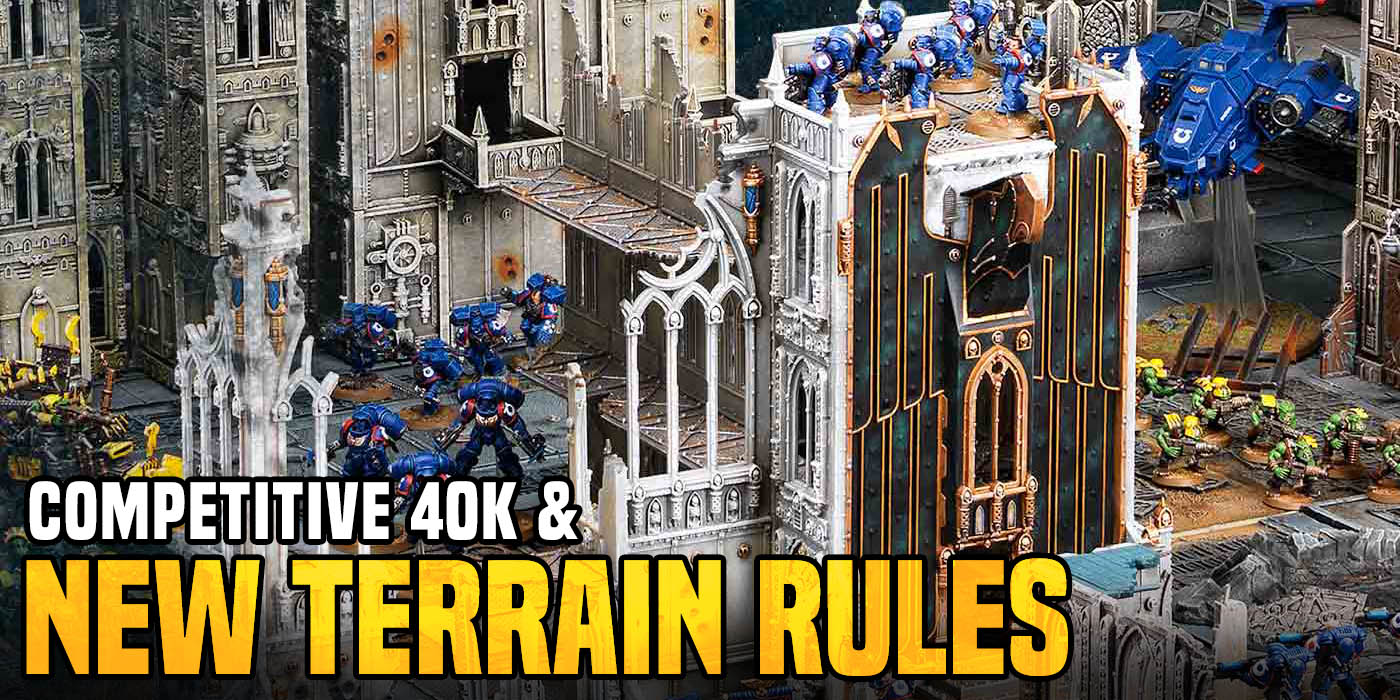 Adam here, back to talk about the new 9th Edition Terrain Rules and how they will change events.

Hey everyone! Adam, from TFG Radio, back for another week of talking about the new edition of 40K and how it could impact the competitive scene.

We are still seeing a lot on new tidbits coming from Games Workshop. It can sometimes be very frustrating when they tease only parts of the new rules and we still don’t have an official release day announced just yet. Some of the info we have been given has been really informative, while other information just leads us to more questions than answers. Recently Games Workshop previewed some of the new terrain rules and have given us plenty to think about. This week we will have a look at what some of the new rules ar and, more importantly, see how they could be implemented at your local tournament, or even at some of the larger events that will take place after the new edition is released. 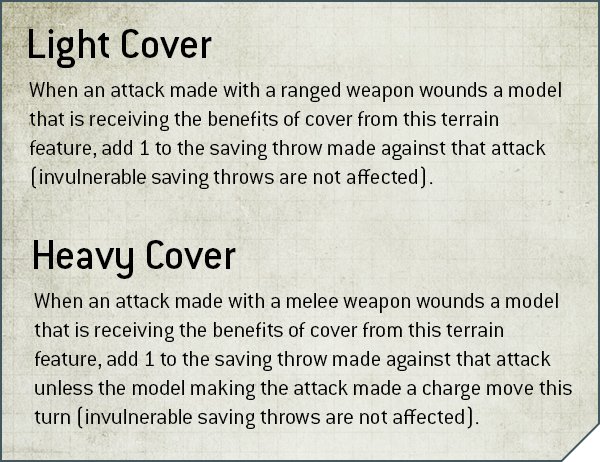 If you haven’t read seen or read some of the new rules for terrain, I suggest you go take a look at them. There are some interesting rules and there are some rules we can only guess at since they do not clarify them. I think one of the bigger things to come out of this is that you can assign “traits” to a piece of terrain at the start of the battle. These almost seem similar to chapter traits as each one give that terrain piece a new rule. It may not be as drastic as the Age of Sigmar terrain but these traits should have more of an impact on the game than the current edition. As mentioned, you and your opponent are supposed to both agree on what traits to give a terrain piece. This can lead to some pre-game issues as players may not be able to agree on what traits to give a terrain piece. It’s not good to start a game in a negative tone, but luckily there are a few ways to mitigate this and, hopefully, not have any pre-game animosity. 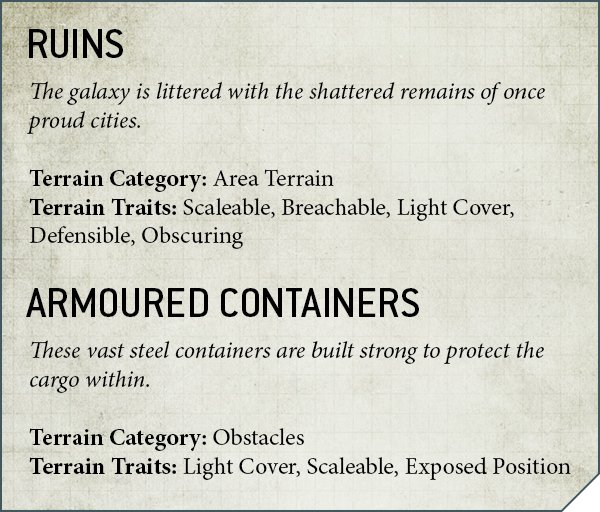 Luckily Games Workshop has a set of categories and traits already pre-assigned for some of the terrain. in the sample article you can see how they do this. They show us both Ruins and Armored Containers. They both have their category and traits defined so there is no question as to what the terrain can and cannot do. Hopefully Games Workshop has a list of different terrain pieces as this takes the pressure off the tournament organizer to come up with something for their terrain. Even if Games Workshop only gives us these two examples, it shouldn’t be difficult for a tournament organizer to figure out how to define their terrain. If they are able to do this then they have an easy way of defining their terrain. This is really helpful if you have terrain that is unique to that tournament’s event, or it is just a piece if terrain that the tournament organizer likes. This system of defining terrain should also allow players to plan ahead and adjust their armies, if need be, to the terrain type and rules that they will see at their event. There will even be battlefield examples so that should be helpful, especially for newer Tournament Organizers that may have a hard time figuring out how to set up their terrain. I can only see something like this as being a positive for the tournament scene. 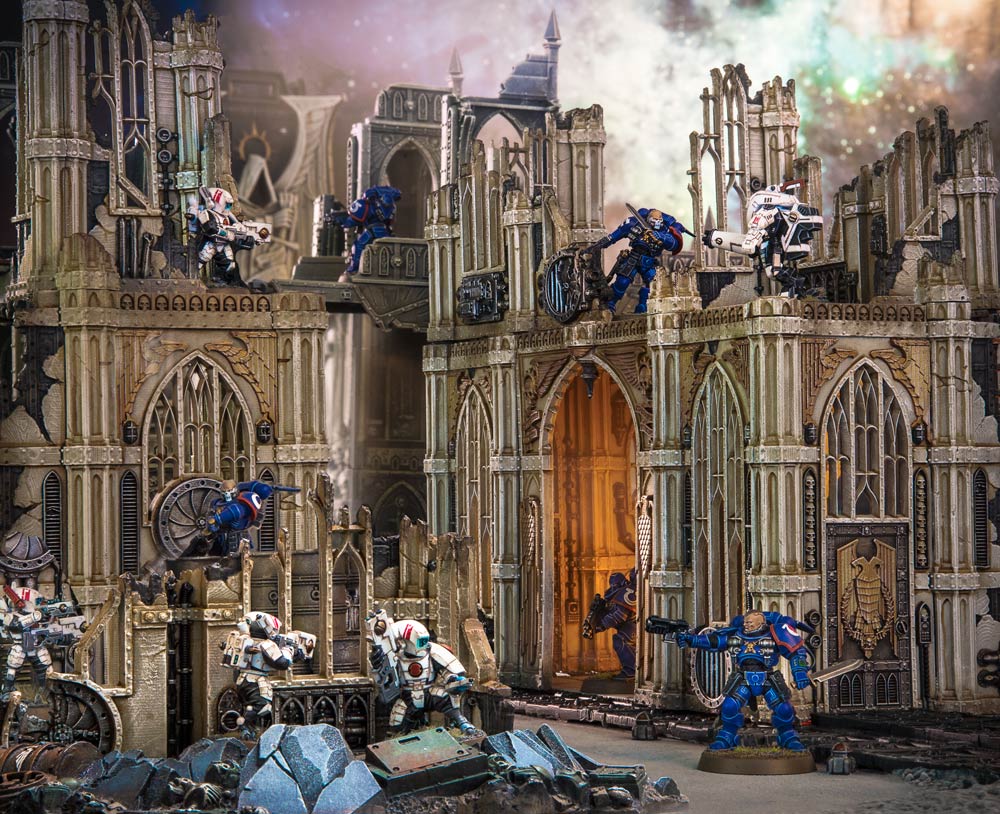 Even with all I said, there are still a lot of grey area in what we know. In the community page about terrain, you see some traits for terrain pieces but don’t know what they do. Is that trait going to be helpful or hurtful to your army? Is the trait even going to be a factor at all? There have been a couple pictures shown of the battlefield but is that how all the tables you play on will be done? Some may also say that these are just “guidelines” so the Tournament Organizer can really do whatever they want. That is true but I’ve found that in most cases people will go with what the company prefers or sets as an example. As we get closer to the release of he new edition, I’m sure that things will become more clear. Once again, I actually like the way the terrain rules are setup. Easy to organize , easy to understand what piece does what, and easy to reference, as long as the Tournament Organizer has a packet with those rules in there. 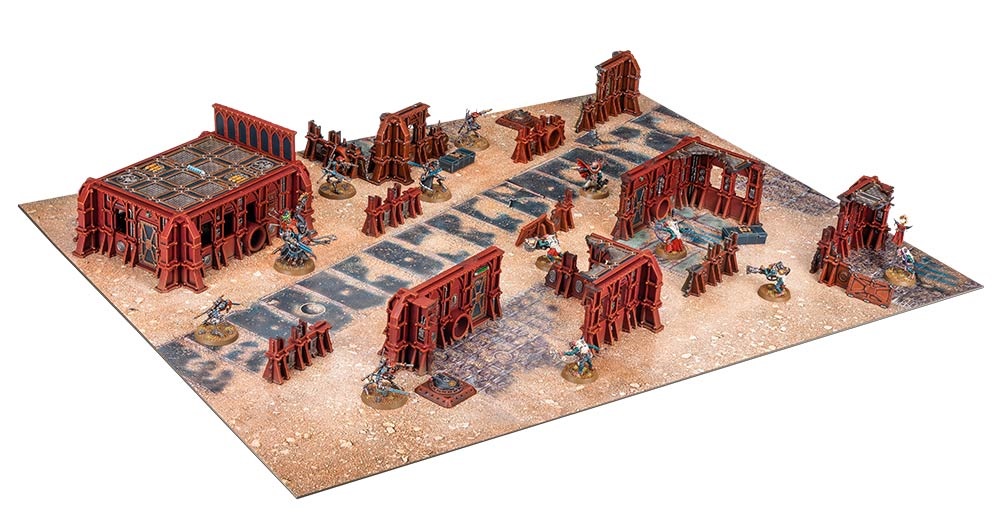 ~That’s all for this week. I hope you enjoyed the article. let me know what you think of the terrain rules that we have seen in the comment section below!