AoS: Using the Anvil of Apotheosis 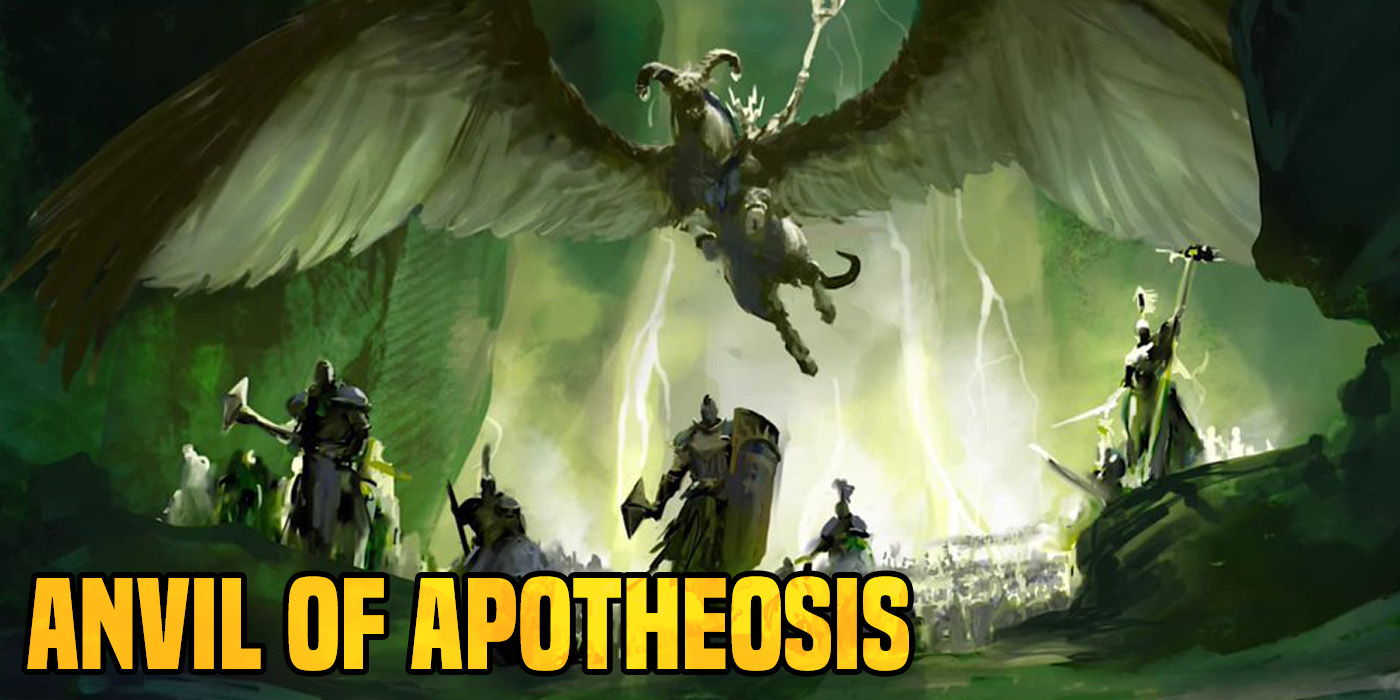 Here’s the epic journey of a brand new Hero built with the Anvil of Apotheosis.

In the latest General’s Handbook, a brand new system was introduced to help represent narrative commanders on the battlefield. Using a series of charts and either 20 (for a basic hero) or 40 (for a legendary monster) points, you can give whatever sort of cool character you have floating around in your head and bring him to the table for Open, Narrative, or (with opponents permission) Matched Play. I thought I’d cook up a hero of my own and walk through the process to show how it’s done, so here’s the birth of Lyrian, the Eagle’s Talon.

Lyrian is a basic foot warrior, a combat answer to bolster my spell-heavy Lumineth force, so I decide to start with the 20 point option. Next, I have to decide his race, which will obviously be Aelf since he’s going to be joining up with my Lumineth. Checking the Ancestry chart, I find the Aelf section, which shows the base Movement, Save, Wounds, and Bravery characteristic, as well as the Destiny Point cost. Aelves are standard size and power, so they cost 3 points, but if you want to get really gnarly you could build a Bullgor for 8 or even a mighty Dragon Ogor for 10. After selecting the Aelf ancestry, I pick the Lumineth Realm-Lords army keyword. At the beginning, my hero has a 6” move, a 6+ save, 5 wounds, and 7 Bravery. We can upgrade that later if we want, so that’s fine for now. 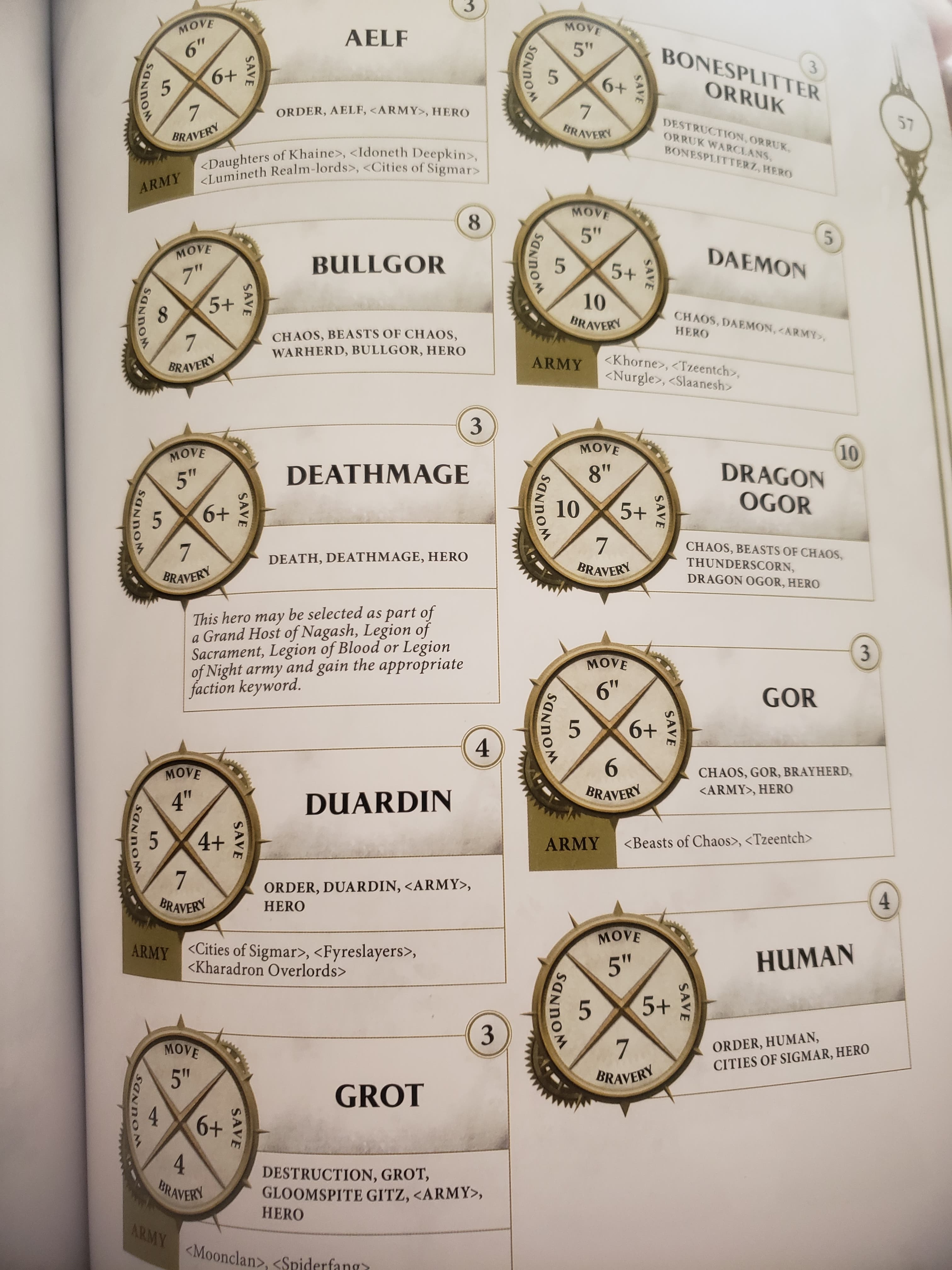 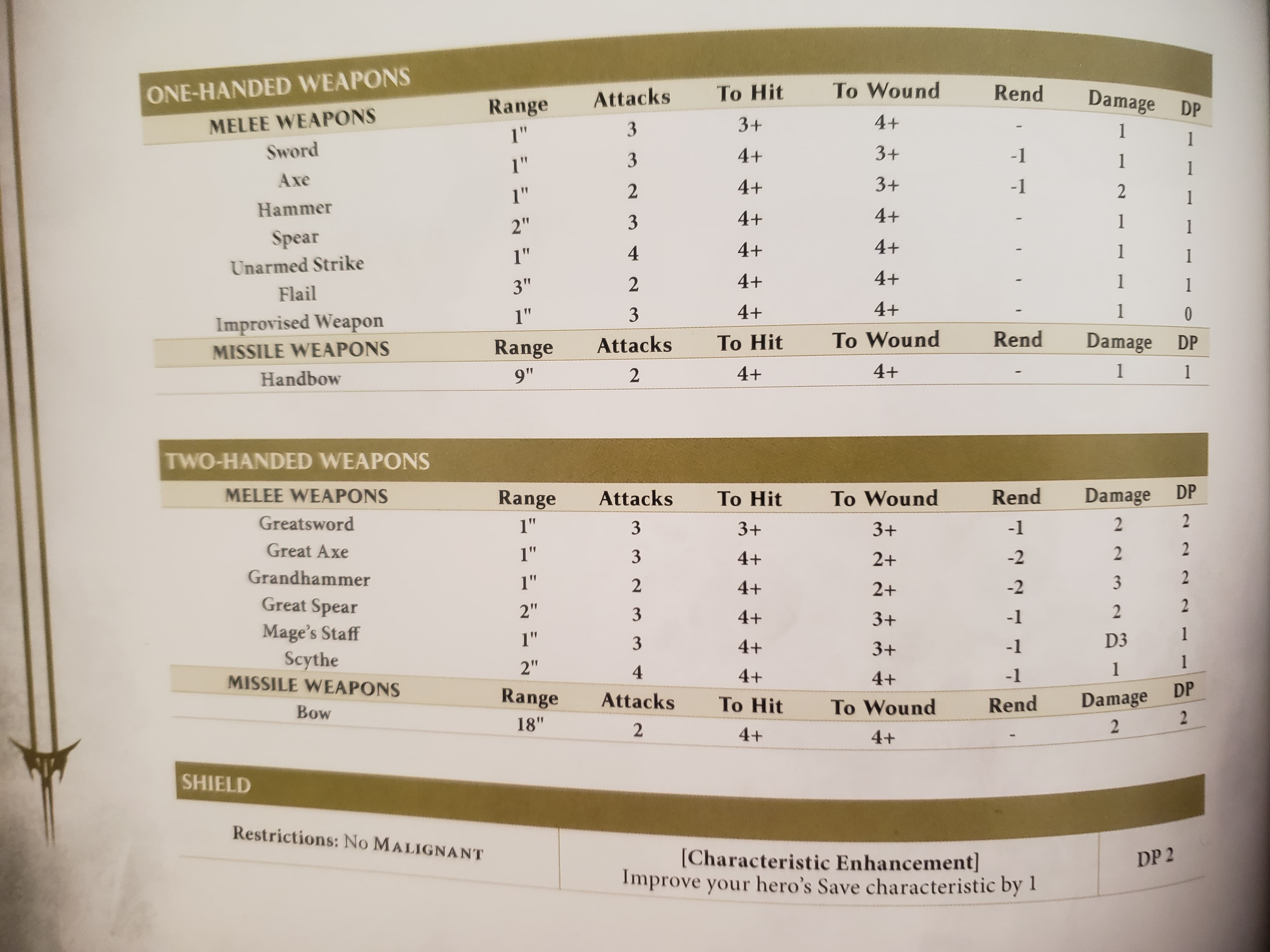 Next up, we have to pick what kind of hero we’re going to build: a leader, a priest, or a mage. This doesn’t cost any points, but does give your creation some special rules to use on the battlefield. Since I want Lyrian to be a warrior, I chose the Commander Archetype, which gives him a special command ability. I have the choice to either boost hit rolls or save rolls, so I choose hit rolls to represent Lyrian as a warrior commander. 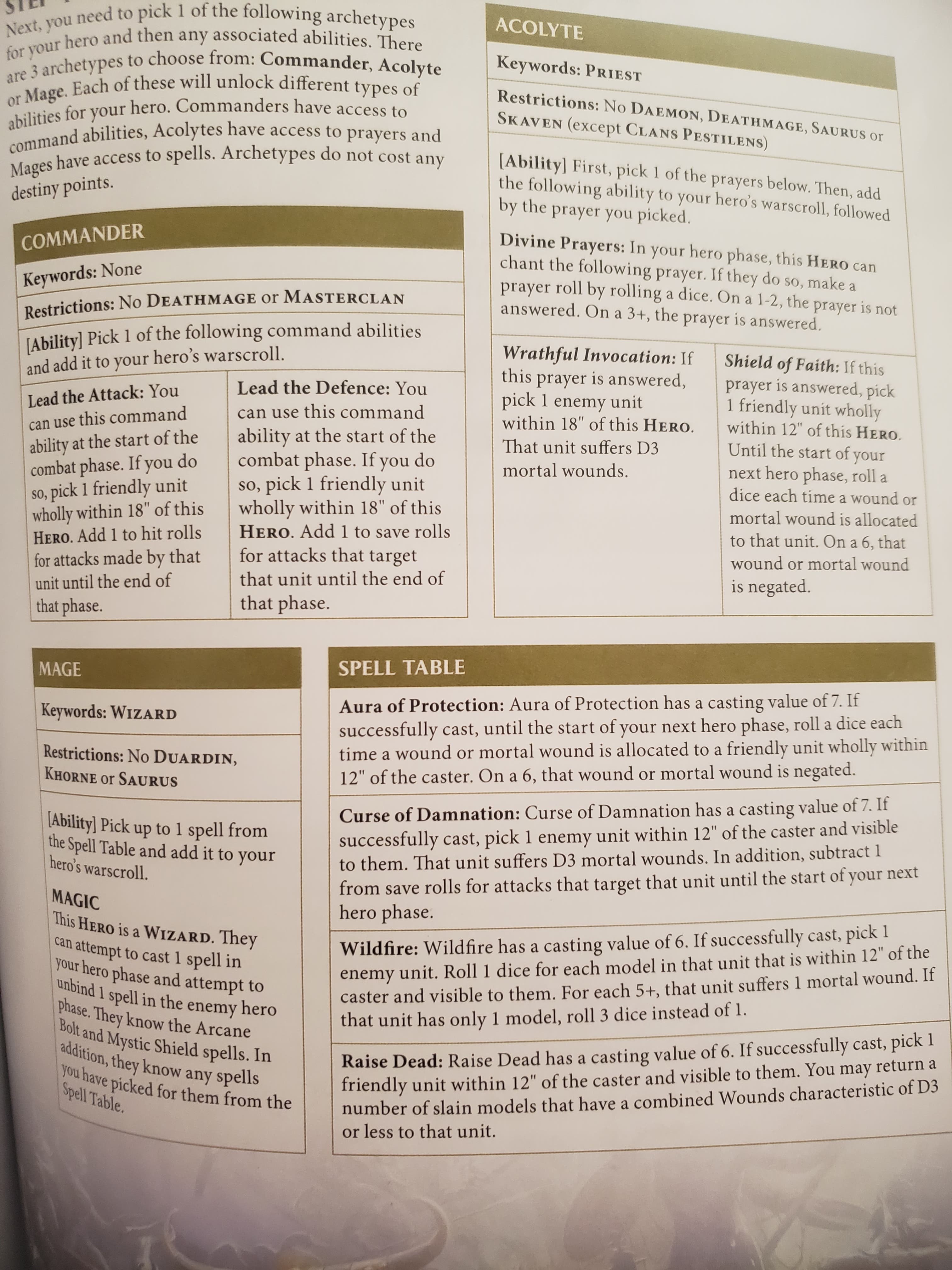 Next up, we decide whether or not to give Lyrian a Bestial Companion. We can either pick a pet, like a Gryph-Hound or Flesh Hound, a mount such as a horse or a stag, or a gargantuan beast like a Dragon or a Terrorgheist. Lyrian won’t be taking one of these, but if you’ve ever wondered what a Wanderer prince would look like mounted on a Manticore or Chimera, here’s your chance. There’s even a separate table to make your monster even tougher, give it a breath attack, or even let it Fly. Once we’re done there, our last stop is the Enhancement page. 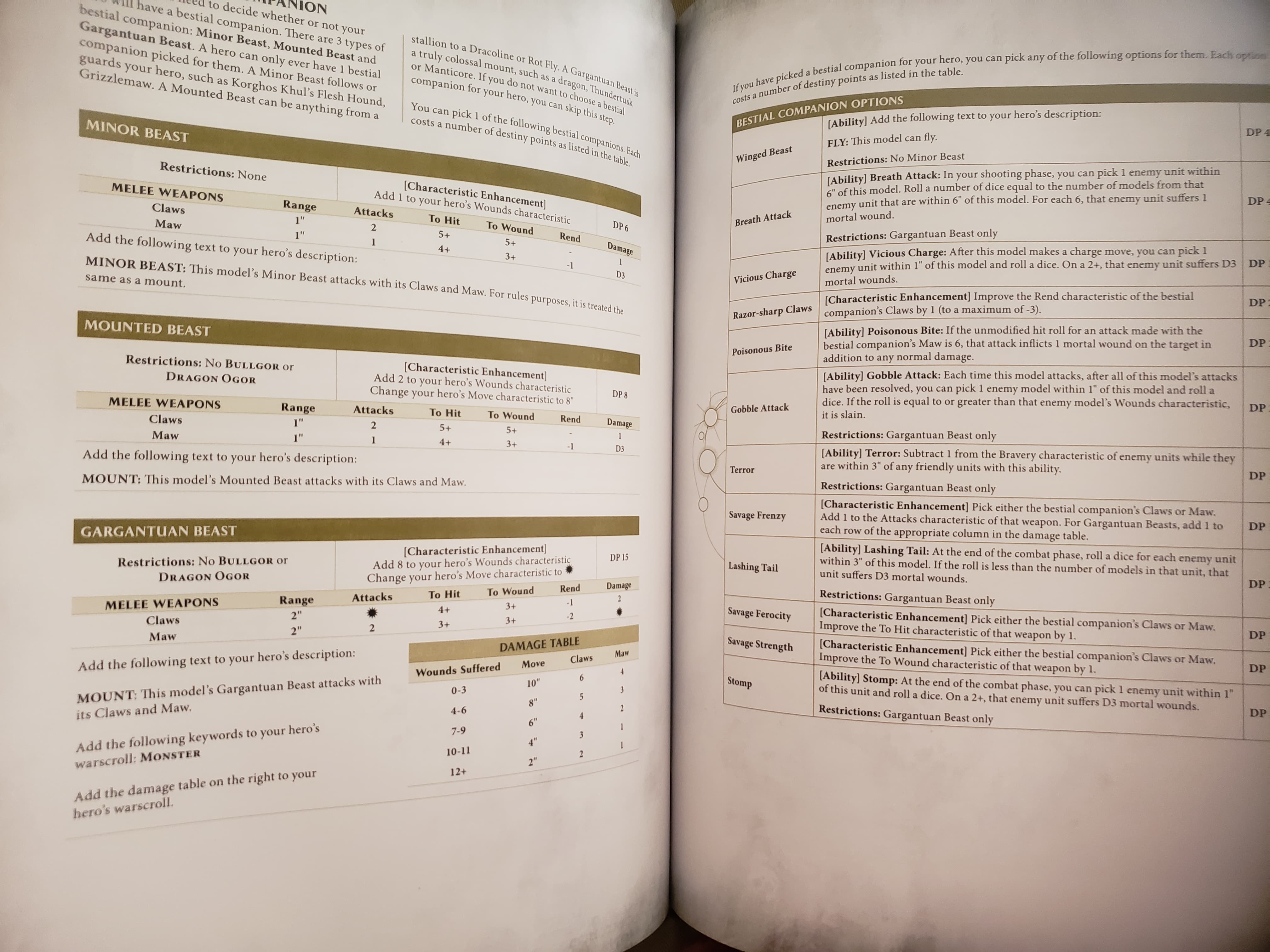 At long last, we make our hero the true, deadly master of war that they are. This chart gives you a ton of options to make your hero deadlier, shootier, whatever you may need. My first step was to make Lyrian’s glaive a little better, so I took the Weapon Master rule to let him hit with on a 3+ and the Ferocity trait twice to increase his attacks with that weapon from 3 to 5. Together, those upgrades cost 6 DP, dropping me down to 9. With my remaining points, I want to make Lyrian a little tougher, so I buy Extra Armor twice to increase his armor save from 6+ to 4+ and Superior Vitality twice to increase his wounds to 7. Finally, with my last 3 DP, I buy Ward to give him a 6+ shrug. 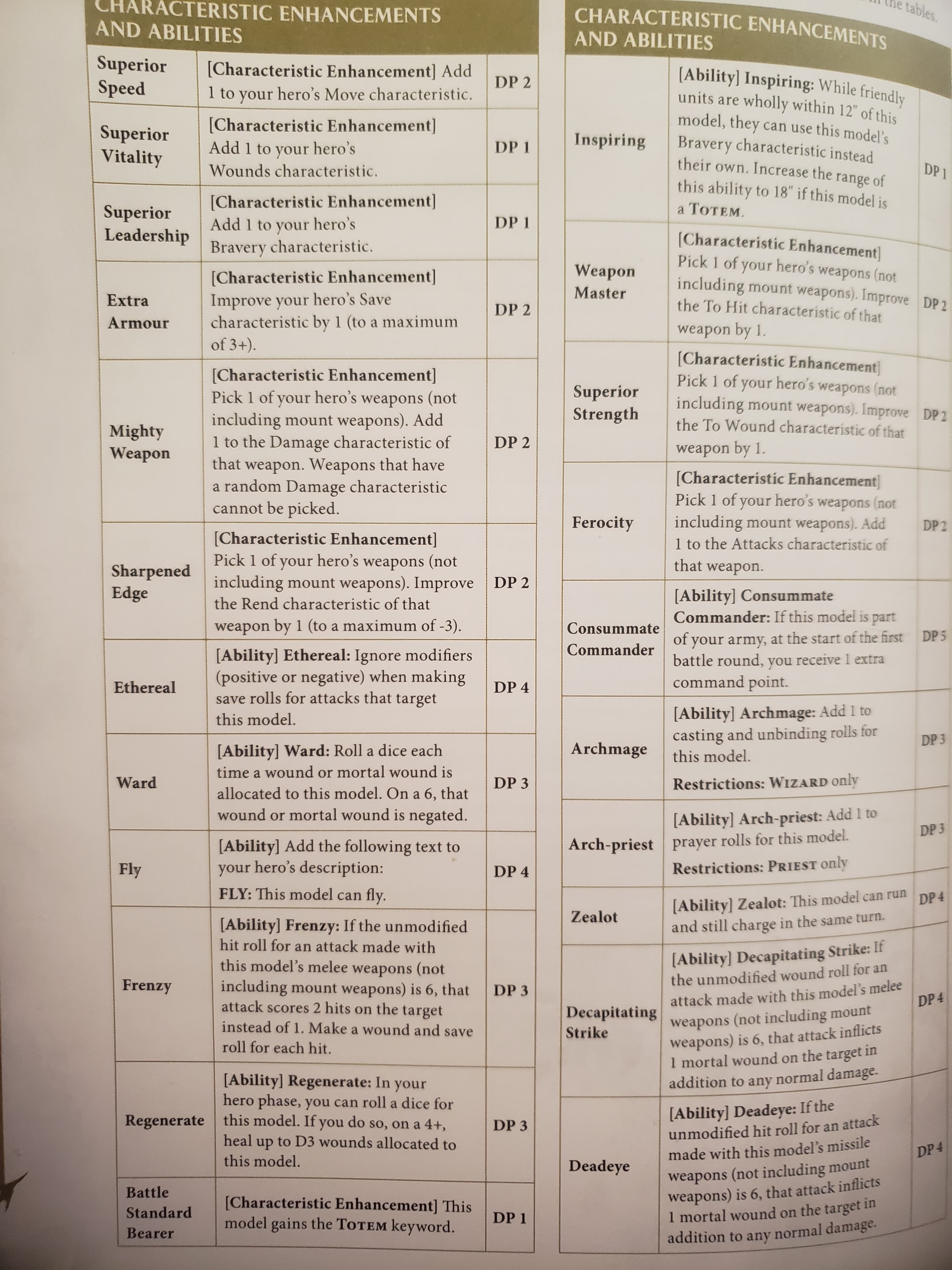 And there you have it! A fully built character to use in your Narrative campaigns or casual Matched play with your friends. All that’s left to do now is make a mock-up warscroll and convert an awesome model for yourself! Here’s mine, before I slap paint on him. 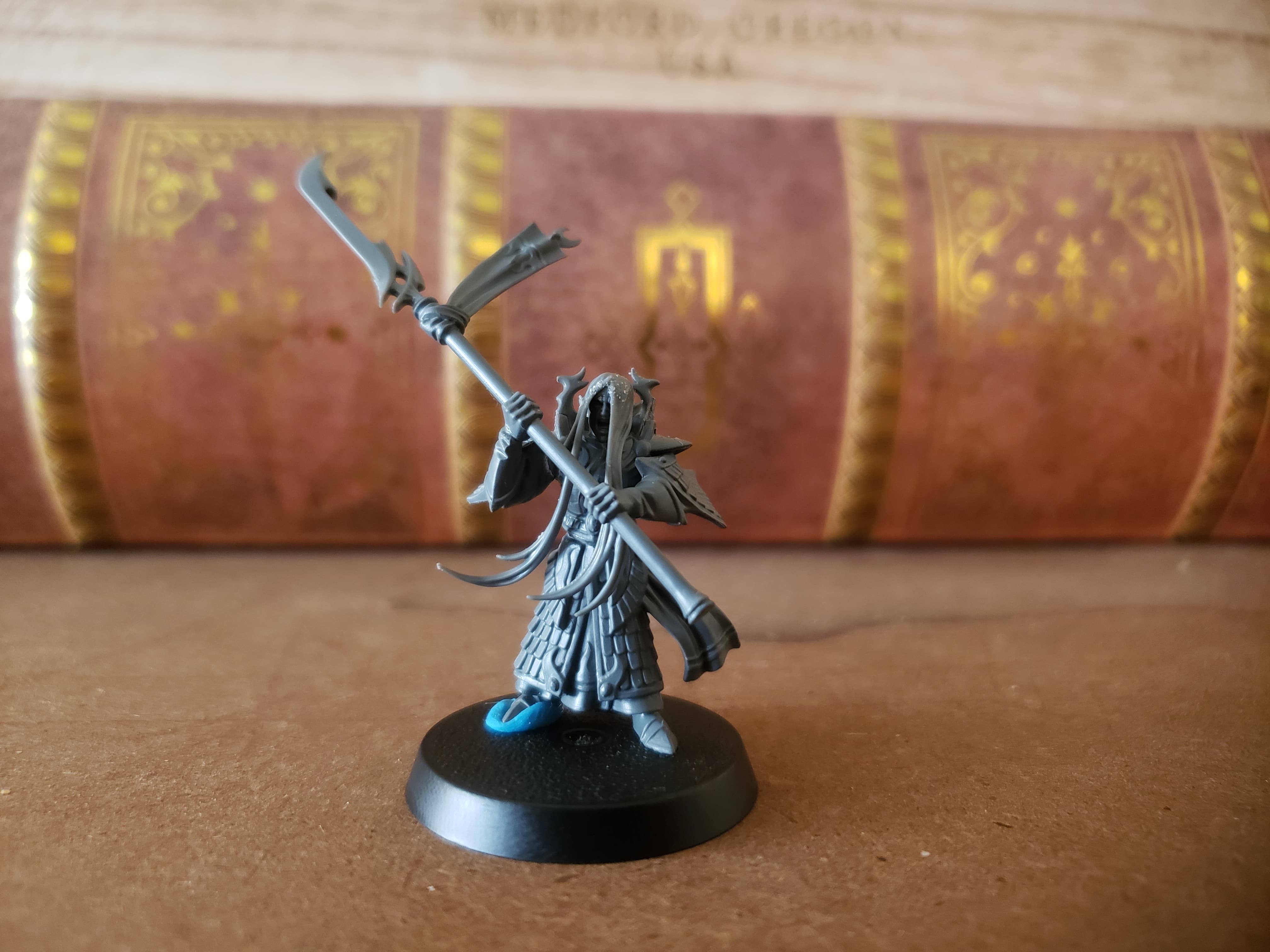 Will you be building any new heroes?