Board Games Retro: “The Goonies” Board Game Is a Real Collectors Item 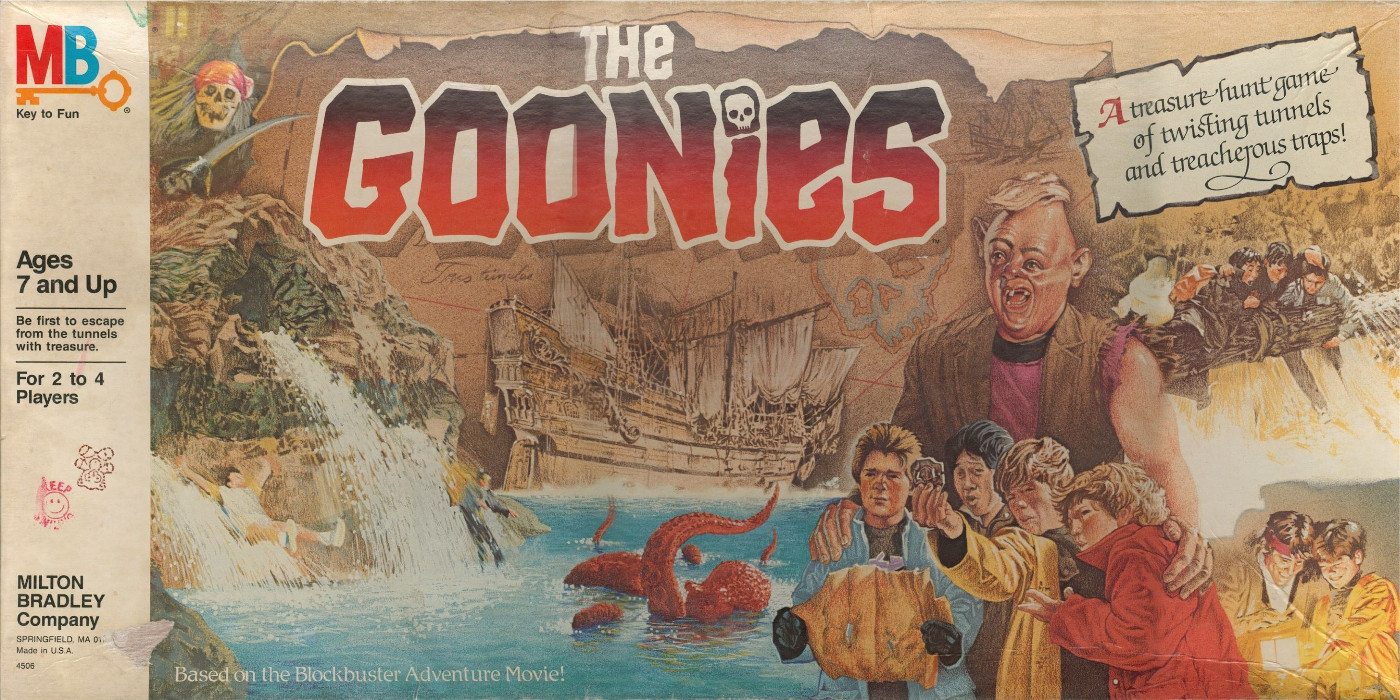 Quality game play and great card art make this game a rarity in even the most prestigious collections.

The Goonies is an absolutely classic movie. It’s exciting, funny and even inspirational at times. If, for some wild reason, you’ve never see it, please do so now. I’ll wait. 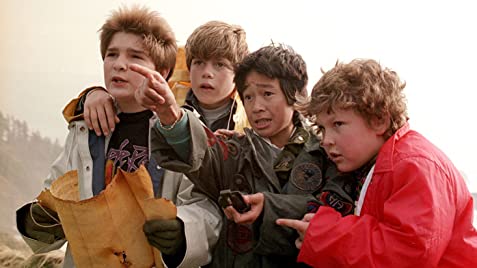 It should come to no surprise to you that there was a board game based on the movie. Oh, what a time to be alive. When every movie, no matter how violent got a board game and action figures.

For ages 7 and up

So, how is the Goonies board game? You will hopefully be very pleased to find out, it’s not awful!

The Goonies board game is a competitive roll-to-move (kinda) game with hand management mechanics and some take-that elements. The goal of each player is to be the first one to escape the cavern with a treasure in hand. Because they are all about one thing, it’s every person for themselves.

“You gotta do what’s right for you, up there. Down here, it’s my time. So, go ride up Troy’s bucket.”

Each player takes the role of one of the Goonies and moves through the various sections of One-Eye Willy’s Cavern. 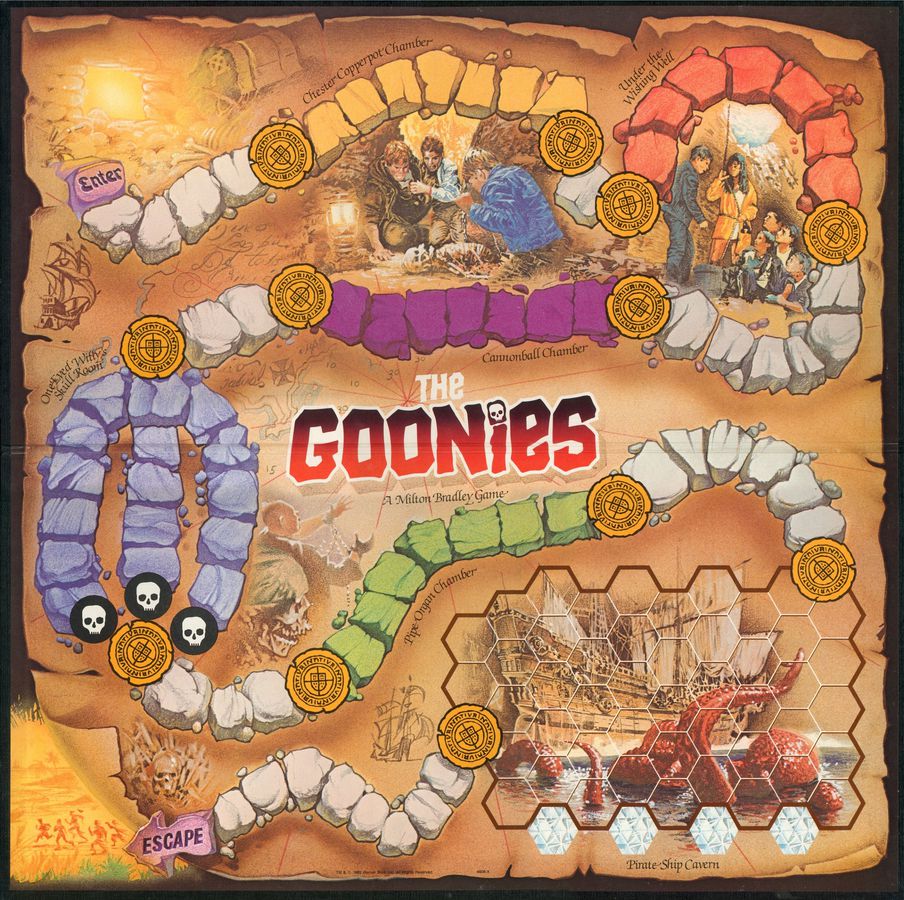 Rather than just using a die to move, players have a hand of cards which direct how much they will be able to move on their turn. 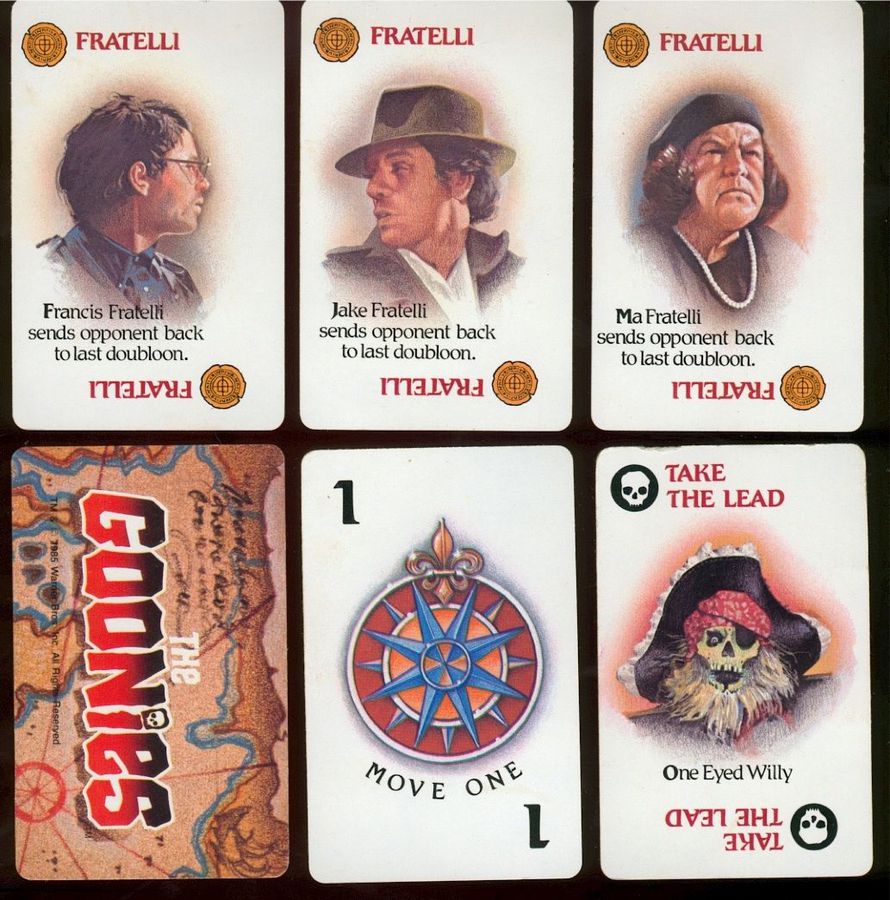 Most cards just have a number indicating how much they allow the player to move. But the Fratelli cards allow you to move another player backwards and the One Eyed Willy card jumps you in front of the player in the lead.

But the gameplay is slightly more involved than just that. Throughout the adventure, players will encounter special areas which might slow them down. When starting a turn on any colored Encounter space, players draw from that area’s Encounter deck, which dictates if the player is able to get by the various booty traps throughout the cavern. 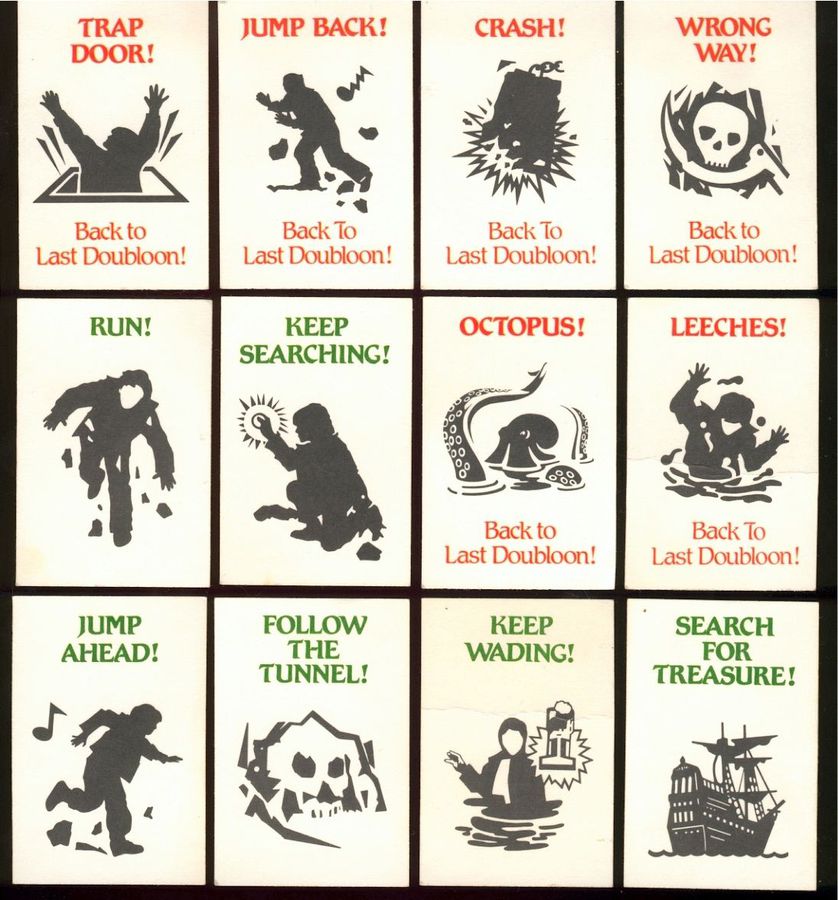 A green card allows a player to move as normal, but a red card moves them back to the previous doubloon space. While this is nothing revolutionary, it is a big step forward over other movie tie-in games of the time and I can appreciate that.

But this isn’t the last twist Goonies has to offer. The final area of the board is the One Eyed Willy’s pirate ship and it gives the players a full range of area to move around in. 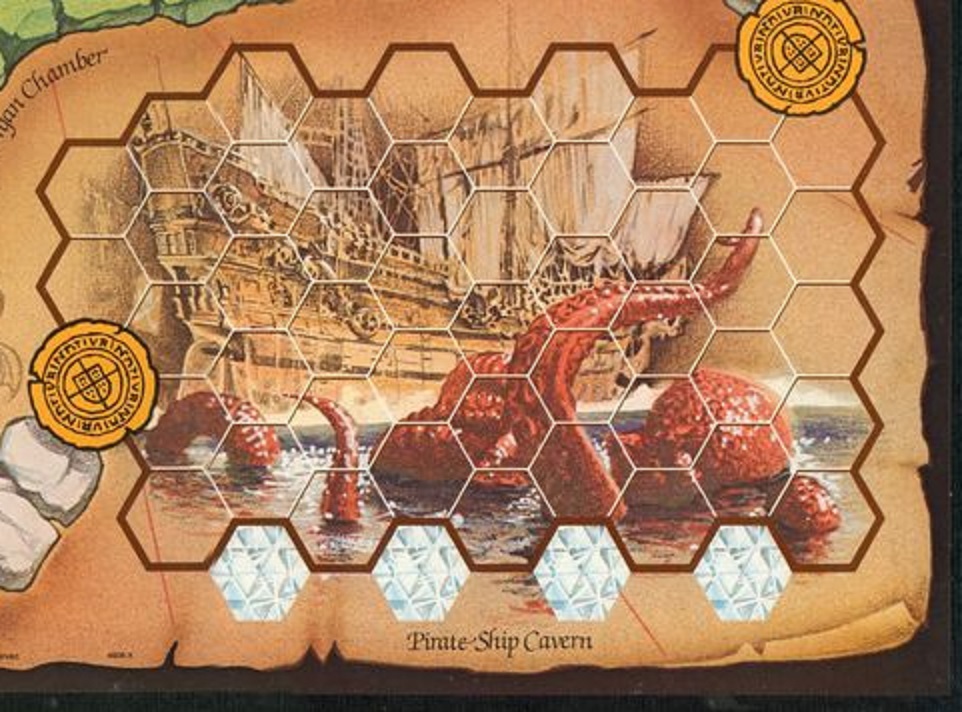 Player enter the area in the upper right and have to make their way down to the bottom row to grab a treasure crystal, then to the doubloon on the left towards the escape. This, again, isn’t anything revolutionary but it adds a nice flair to the final area and gives the players a sense of control of their actions, more than just playing the highest ranked card in their hand each turn. 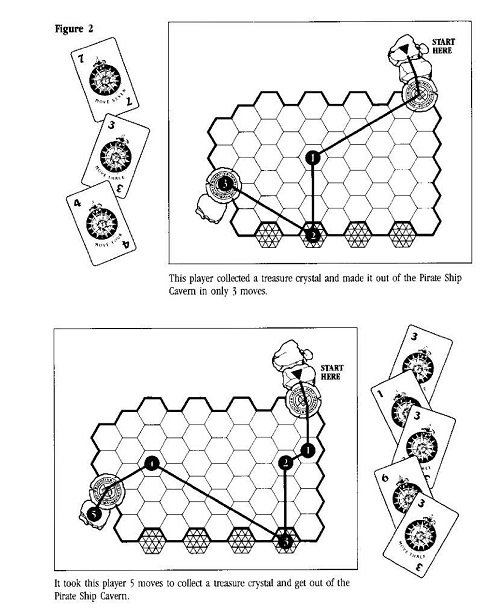 The first player to reach the Escape with a treasure wins the game!

I actually really like this game, for what it is. It’s by no means a thrilling adventure on par with the movie, but it is a well thought out game with much more effort put in than the designers needed to, frankly. When you’re working with a movie as big as The Goonies, people will buy the game regardless of the quality. So it’s nice to see Milton Bradley put some real effort into making this more than a simple roll-to-move.

Plus, the artwork is fantastic. The box art is exciting and really captures the movie and the art for the cards had no right being this detailed. It’s a shame the encounter cards are just a drop in quality. 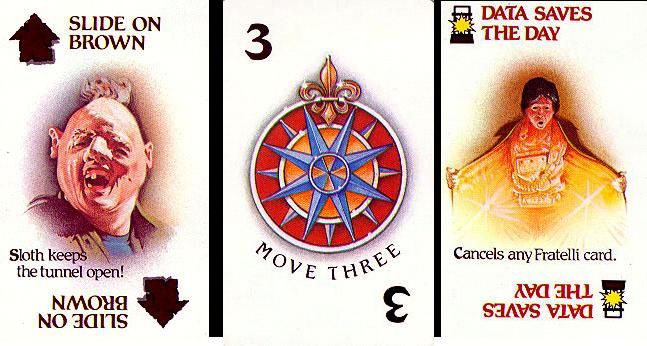 Still, it makes me wonder why the designers didn’t implement free-movement mechanic of the pirate ship into all of the game’s encounter areas. I can imagine having this element in other areas, like having to move to the piano then across the drawbridge. It doesn’t fit the narrative of the movie exactly but for sake of gameplay I’d be willing to let it slide.

I’ve searched around an it seems there is only one copy out there for sale and it’s missing game components. If you can find a complete copy (which seems impossible), pick it up as this is a collector’s item for the real Goonies out there.