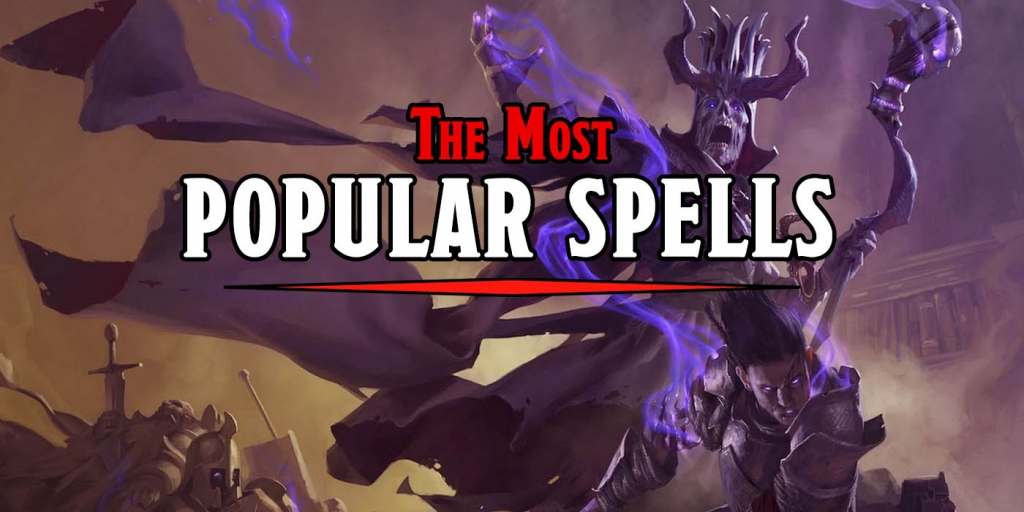 Warlocks have overthrown Wizards as the top caster. With that in mind, here’s a look at some of the top magics, from cantrips to items to invocations, in D&D.

It’s time once again to dig into some data and see what it says about the people playing Dungeons & Dragons. It’s an interesting analysis, because D&D isn’t a competitive game where there’s a meta you have to worry about or sort through, and as WotC staff have said repeatedly, the classes aren’t balanced against each other. But it shows what people are playing, and where the game is. Which gives us an idea of where it might be heading. By knowing what’s popular, and what’s working, we get an idea of what people want to see more of–the D&D team talk repeatedly about tweaking features based on community feedback. Here’s where the community is–according to D&D Beyond.

Today we’re looking at data compiled from “active characters” and getting some surprising results. Last week, it was revealed that Warlocks have overtaken Wizards as the most popular caster class. Now, there could be a number of reasons for this. For one, the popularity of Critical Role (and Fjord being a Warlock) might have something to do with it, it’s a very visible example for the class. For two, the class plays very differently, and it’s a lot more streamlined than a Wizard. You cast Eldritch Blast, you cast two spells per short rest, and you only get better from there. Plus, it comes with built in plothooks in the form of your Eldritch Pact. Or it’s all because of Destiny, because Warlocks rule and Wizards come from the moon.

Whatever the reason, Warlocks are ascendant, which again, could be talking about D&D or Destiny, which helps to inform some of the data we’re seeing right here. Look at the top ten choices for cantrips and magic items:

As you can see Mage Hand is the number one cantrip. It’s available to all of the Arcane spellcaster classes, it gives you unprecedented utility, and it’s what you imagine a spellcaster of any stripe might do. Use their magic to move things around. Fire Bolt being number 2 is a surprise, but it goes to show that Warlocks might be the most popular class, but even they aren’t popular enough to knock the d10 cantrip from its perch–Eldritch Blast is better, but only if you’re a Warlock. If the Unearthed Arcana feats become official, you might see this change as more casters can more easily get access to Eldritch Blast and the feat that buffs it.

But from this data you can really see that people use Cantrips for two purposes. As a main attack–and again, it’s all about whatever does the most damage at range, Chill Touch, Ray of Frost, Shocking Grasp, and the like don’t even show up–or they use them for all kinds of utility, and from what we’re seeing it looks like more players are into the toolkit aspect of cantrips than attacks. Which is pretty cool.

It also explains why you see so much healing in the magic item department. Surprising no one, low level magic items are popular, and one of the few items you can actually buy in D&D (especially if you’re playing in the Adventurer’s League), the Healing Potion, is the most popular of them all. Gotta get those hit points back so you can keep fighting. But speaking of magic and Warlocks, let’s look at the top ten Warlock invocations and Artificer spells.

Agonizing Blast is no big surprise here. It’s the invocation that makes Eldritch Blast the best damage dealing cantrip in the game, allowing the Warlock to add their Charisma bonus to each blast. And with the Eldritch Adept feat in the latest Unearthed Arcana, any character can now do that as soon as they select the feat. Eldritch Blast also lets you make multiple attacks, so you can either deal its damage to one target or start spreading it around as you level up. Devil’s Sight is another one you see fairly often–it changes the way darkness works, allowing you to see normally in darkness, which is basically darkvision+. Funnily enough, it doesn’t counter dim lighting, but, most everyone has darkvision anyway. Devil’s Sight also means that you can get the benefit you think you get out of Darkness, because as written the spell doesn’t do anything but potentially block line of sight. You can still target people with spells that don’t require you to see your target, and without Devil’s Sight, yeah your opponents can’t see you, but you also can’t see them, so the advantage and disadvantage cancel each other out, meaning you roll normally.

Artificers, meanwhile, continue the trend of Cure Wounds being the most popular spell available to classes that get it. Bards, Clerics, Druids–anyone who can take the spell usually does. It’s surprising to see just how many cantrips are on this list, but Artificers are still very new, so perhaps this will change in time.

Well that’s it for now. A look at how magic is shaping up in the game. One has to wonder where the game is headed–with more Unearthed Arcana between now and November, hopefully we’ll get a good idea.