Over the weekend, WotC employee Orion Black quit their job, sending the D&D community into an uproar over the company’s conduct.

This statement, which appears in full below, comes within a month of WotC’s pledge to promote a more diverse and inclusive environment both in the community and within their own ranks, leading many to criticize the company. As Tor.com reports, the company was called out for “paying lip service towards diversity and change while exploiting BIPOC, especially Black freelancers, and silencing and ignoring criticism of systemic problems.”

Black’s statement is below.

It’s July 3th and I no longer work for Wizards of the Coast. I no longer work on D&D, the little that I did. This is going to be a long thread and my last for quite a while, so bear with me.

I took the job for two reasons. The first was for the dream. To escape poverty doing what I love, writing and making games. The second was to make D&D welcoming to the millions who are scorned by it.

A lot of people had hope for D&D that they carried with me. While some people were upset to see me work for a corporation that overshadows indie, others hoped that I would be able to make real change. I tried. I failed. And I lost a lot.

Liking a tweet or post, RTing, or even following people who speak ill of WotC can lose you your job in an instant. That’s why you never see it happen. @Zbeg is 100% correct. It’s a silencing tool. I can say more now.

Kindness doesn’t replace respect. Working within your comfort zone doesnt support change. Most people in that group were not ready for me to be there, a nonbinary Black person who would actually critique their problems. Idk what they expected.

I worked hard for a very long time. I got a lot of smiles and vocal support, but it was followed by inaction and being ignored. My coworkers were frustrated for me, and still are now. I confided in them often, cried on shoulders on a few occasions.

I realized at one point that leadership had given me 2 assignments over about 5 months. It was mostly me asking project leads for work, searching out opportunities. Leadership didnt really care about me or my growth. I had to.

I firmly believe that I was a diversity hire. There was no expectation for me to do much of anything. I probably disrupted them by being vocal and following up. It didnt matter if I was supported by seniors and positive.

I think genuine people proposed me as an option and it was accepted because it would look like a radical positive change. It would help quiet vocal outrage. And because I had to stay silent, it was a safe bet.

I started to lose all of my confidence. I started to lose trust in myself. After finding out that I wasnt getting an extension or FTE, I resolved to just finish things out and take care of myself. To stop fighting and to just survive, quietly. But it just kept getting worse.

They would talk about how they’re going to start working on treating staff better, retaining contractors, actually answering questions. How much they were invested in diversity and change even though they hired two cis white dudes into two big leadership positions during this. One of whom claimed that he doesnt know what he’s doing. No shit. I never want to hear “maybe they just hire the best person for the job” again.

I found out that some of my work was stolen, which destroyed me. It lined up with a project they were going to do and I had sent it in to someone in leadership months ago. The project was announced and this person who contributed “forgot” that we had a meeting where I gave them my ideas, and then a follow up document the day after. I knew nothing was going to be done about it. Someone else told me that the person said sorry that they forgot. That’s it.

I was really losing my ability to do much of anything. I have depression and anxiety and ADHD, all of which I manage pretty well. But those parts of me were under the pressure of being ignored, disrespected, “forgotten”, and not being able to say a word to the world.

Then, as social unrest continued global due to BLM, the D&D team comes out with their statement. It was like a slap in the face. How much they care about people of color, how much changing things (that I and others had been pushing for months, if not longer) was just going to happen now. It took weeks of protesting across the globe to get D&D to do what people they hired have been already telling them to fix. You cannot, CANNOT say Black lives matter when you cannot respect the Black people who you exploit at 1/3rd your pay, for progressive ideas you pick apart until it’s comfortable, for your millions of profit year over year. People of color can make art and freelance, but are never hired. D&D takes what they want from marginalized people, give them scraps, and claim progress.

I spent my time in that building worrying about how much people hated me for working there. I spent a lot of time thinking about how much it hurt to work there. I had and still have supporters, and many. Thanks to you all for being my voice and speaking out when I could not. But I felt so isolated and alone. If not for some coworkers who checked in on me, who were going through the same things? I would’ve quit. Every angry statement about D&D felt personal because I couldn’t fix it. Because I failed, whether it was my fault or not. I felt like I was being trashed by everyone because I could not disconnect what I set as a personal responsibility from the state of the game. That part IS my fault.

But I wound up as I am now because of all of this and much, much more. I am depressed. I am unable to write. I constantly question if anything I create is worth anything. I feel like I let everyone down, and no matter how much people tell me I didnt, that doesnt change. I feel guilty for not being what y’all needed me to be, what I wanted to be, and betrayed for how I was treated at that company. It’s an exceptionally kind place on the D&D team. People are very nice to each other in a very genuine way that I truly enjoyed. However, that doesnt replace respect. That doesnt delete how I was treated. It doesnt change the fact that I honestly never want to play a trpg again and am definitely not working in that field anymore.

I know that I’m probably losing a ton of opportunities writing elsewhere because of what I’ve said here, as well as what I’ve sent in internally. It may mean that I will return to poverty, which makes me feel like a failure to my race, my family, and my partner who I want to provide the world. But under all these things, I have my integrity. I worked my ass off. I did my best for as long as I could. And I didnt let them treat me like that without telling the world what needs to be said.

Trust actions, not words. Not “look at how much we freelance so and so”, because freelancing is exploitation of diversity with no support for the freelancer. Not “here we finally did what we KNOW we should’ve done a long time ago”, because they only care about how optics turn to dollars. EVERYTHING involving D&D will continue to farm marginalized people for the looks and never put them in leadership. They wont be put on staff. They will be held at arms length. I hope they prove me wrong.

A lot of BIPOC and other marginalized people are trying to make their way by using D&D. Dont shame them for that. Think about how much, and when you wield your anger, that it is done righteously.

That said, I dont recommend to anyone, working for the D&D department of Wizards of the Coast.

Black’s statement has garnered statements of support from within WotC ranks. Wizards’ Senior Communications Manager with a few comments that express regret for the way things went down at WotC.

This should not have happened the way it did & I'll continue to fight so it does not happen again. I'm sorry if I let you down, Orion. You deserve better. #dnd https://t.co/IGsrDO2OCR

Further down the thread, he expresses that the issue has been brought to “the highest levels of the company in a conversation with Shareef Jackson, DM for Rivals of Waterdeep:

It is. I don't know what will come of it but I know this has been brought to the highest levels of the company.

Jackson, too, offered commentary, stating that for the company to hold true to their values, they need to bring in “the right folks on the executive level to make an important issue top to bottom.”

I have said almost these exact words for years, and more recently to executives put in charge of a community they don't understand. I am in the awful position of saying things I believe without the company making even a single, simple action of real change.

And the reply from Tito clearly outlines that this has been an ongoing struggle, and one that describes Wizards as not making even a single action towards real change. And when it’s the Senior Communications Manager making this statement, someone who presumably is in the upper levels of the company and knows what’s going on, many in the community are questioning WotC’s commitment to their statement.

As Tito puts it, it is an awful position indeed.

Especially since this isn’t the only account that has a similar tale. A statement released by Zaiem Beg, formerly of ChannelFireball, at the beginning of June alleges similar incidents where people of color were repeatedly overlooked or mistreated by the company–though Beg’s statement is about the Magic: the Gathering side of things.

Wizards of the Coast purports to be inclusive and diverse when in reality they have a long history of racially discriminatory behavior, avoiding accountability through a culture of secrecy and fear.

They are an unequivocally racist company:https://t.co/yNWHKMILQm 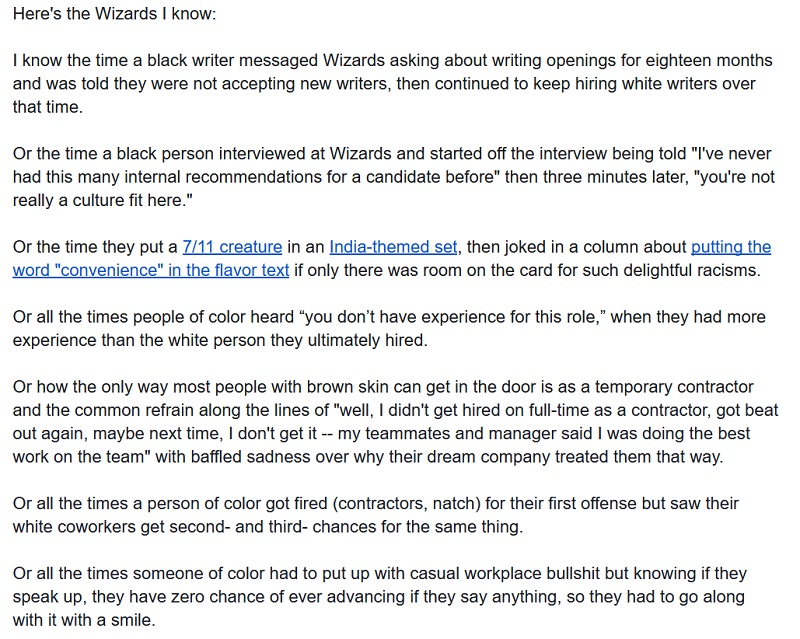 These don’t seem to be isolated incidents. And with that in mind, the community is calling for WotC to change, with some raising their concerns through official channels, or calling for other community action to try and pressure the company to change.

We’ll be monitoring the story closely and keeping you updated as it unfolds. 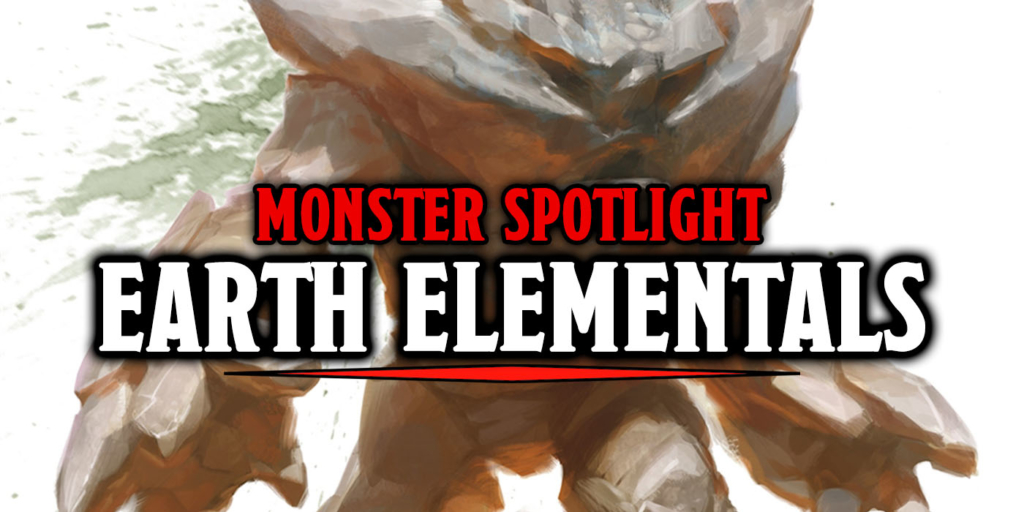