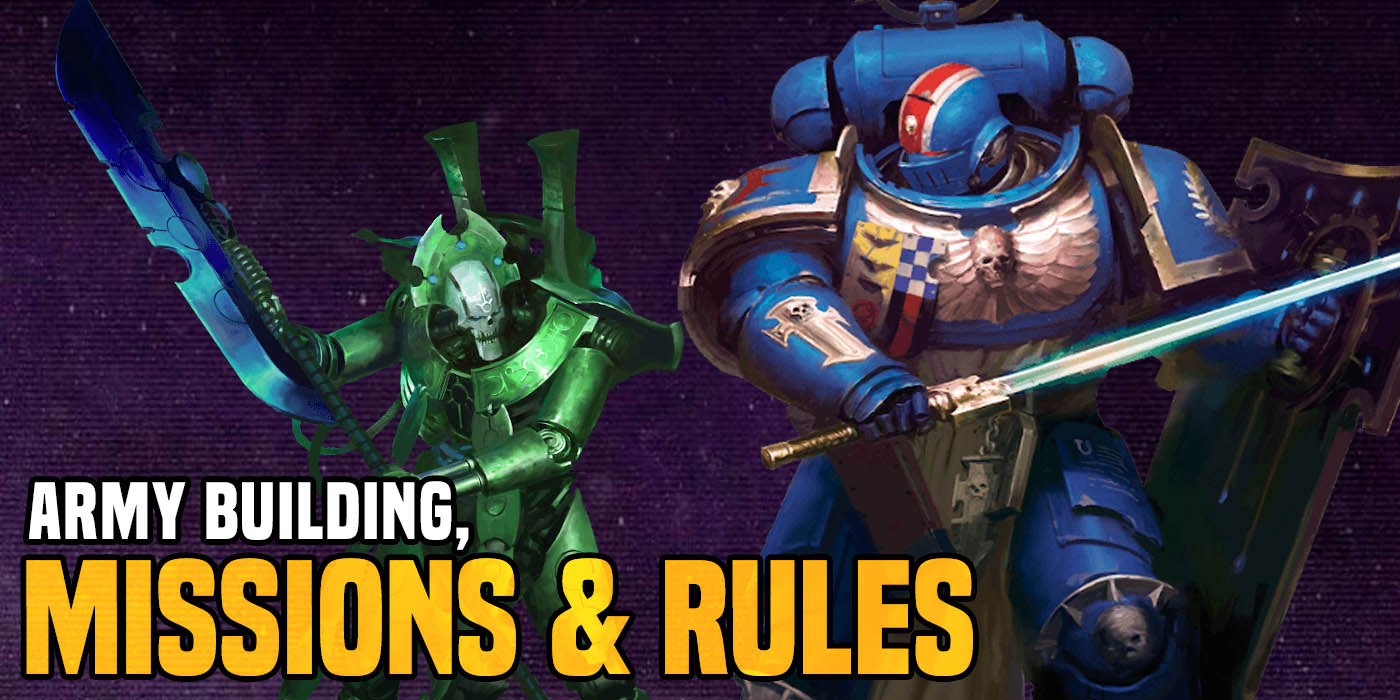 Goatboy here again with some more 9th edition thoughts. We have so much to talk about!

Talking with some friends (still haven’t gotten a game in) has me thinking a few things about the new edition.  Ranging from some weird rules interactions, army building, and then missions.  I want to chat a bit about it as I think until we get fully started with a tournament season there will be a lot of these weird little holes in the game.  I think once we see a new codex come out as well as the new mission pack will have a better idea but again it is a ton of keyboard general nonsense. 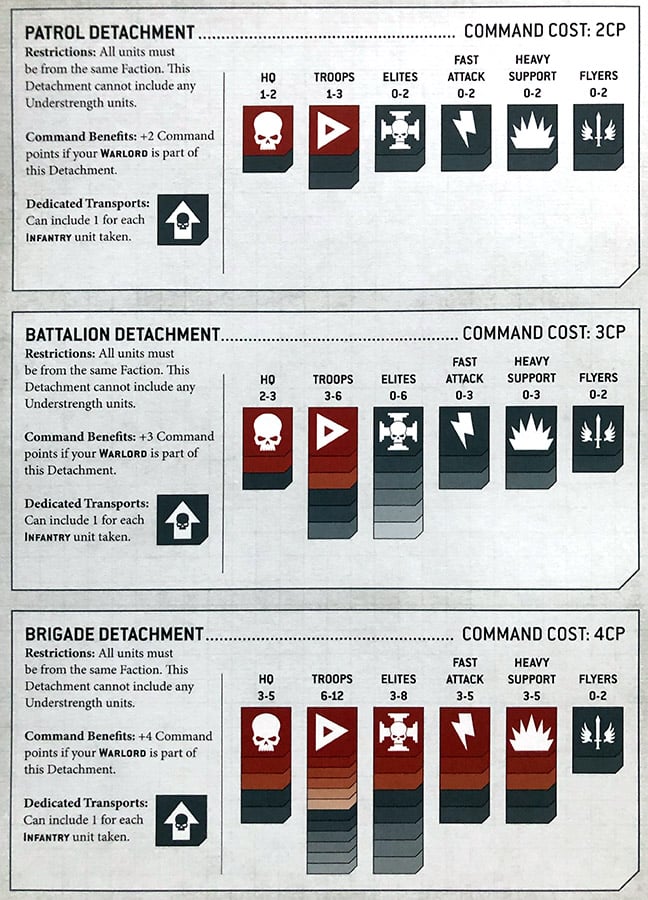 First – lets talk about army building.  I don’t know about you – but I would think most people should start looking at 2 Patrol lists for the future.  You do lose 2 CP but you gain an extra HQ, a minimum of 2 troop tax, 4 Heavy, 4 Elite, 4 Fast Attack, and 4 flyers.  The reason why I bring this up is that there seems to be a lot of ways to get that extra 4th HQ in a lot of lists.  You could just take a Battalion and a Patrol – but again you start to have the 4 Troop tax and we all know how most troops don’t do enough for the game.   Lately I have been playing with some Death Guard lists that mix up some Daemon-engine builds with minimum troops as another option for the game.  It has some fun power, starts with a decent amount of CP, and seems very resilient to a lot of the game.  These monsters will move up fast enough, take the middle, and go to town.  I can also see any army that wants to have flyers going into the two to three patrol game (Eldar flyers) as well.  Heck there are a ton of good little Patrols you can easily slam into a list to gain something you need – especially when this edition is going to see a lot of games where killing isn’t the key.

Speaking of missions – it feels like movement within the first 2 – 3 turns will be the big factor in winning a game.  You need to move, get on objectives and try to hold on to score.  This can either be done by hard to shift units, tons of MSU holding the objectives, or just extremely fast options that push your opponent out.  The common Patrol we’ll see in some Chaos lists will be the 2-3 units of Nurglings mixed with an HQ choice like a Herald.  There are missions that won’t let you out of your deployment zone before the game begins so you can’t always use sneaky Nurglings to hide on stuff.  The push to remove turn 1 scoring means you have to hit turns 2 and 3 so you can build up some kind of points.  A lot of the armies can effectively hide out a bit and if your opponent is castling up you can just say – screw it go for the poker chips and ignore trying to damage.  This will be how Knights lose out in the end as they sorta need each of their friends to support each other which gets hard when you don’t have that many to start with.  I keep looking at lists that force and push into the center and I think most likely we will have to as well.  We’ll learn more as we get additional missions and additional secondaries.  The points for each mission make for a very interesting game – especially if you calculate in the 10 VP you get for having a painted army.

Smites – On the rules front there are some interesting things we haven’t gotten an answer to yet.  The machine gun Smite is something we need to look at – as things like Eldrad can cast 4 with a +4 to cast if he wants.  Magnus can do it as well and even Ahriman.  These types of things seem set up to be very brutal and I remember the original 8th days when I played 8+ Daemon Princes and would Smite 8 times in a game.  I don’t think it should be there but we didn’t see it in the initial FAQs so maybe its something that is still usable?

Funky Charges – How about the current weird charging distance as you measure distance away from a deep strike diagonally – but engagement range can be 5″ vertically and an 1 horizontally.  There will be games where you deep strike 9 inches away but you only need a 3 inch charge to get under the enemy in a building.  Does this mean you should never place a model on top of a tower?  I don’t know it is just a weird one.  This is just like all the tall things without bases that could easily engage anyone of multiple levels in a building/ruin.  The Squiggoth is frigging huge without a base as well as the Lord of Skulls.  Heck beyond all of this think about how Heroic interventions could get weird if you are near someone above you.  That 3″ becomes a 7″+ heroic charge all of a sudden if you don’t place your models right on the upper floor.

Multi-charging – Beyond this the whole you have to engage all models you charge in its engagement range means even flying models are in for a weird change.  You could have true bubble wrap stop any charges as you need to be able to get over them all and engage all units with your movement.  If you can’t jump over well enough then you just fail.  This is going to happen a ton as people forget that everything you charge needs to be engaged.  I am not saying assault is dead – it just has to change into either murdering out a unit, movement to get on an objective, or just forcing a tank/monster to shoot what you want it too.

I am sure will find other things as we play.  This edition feels very much like they tried to close all holes (bar that weird 1+ save thing) so I am hoping we can easily find the kinks, feel bad about being WAAC RAW players, and then hopefully get a tournament system going as we get out of this pandemic.  We got one more week and then I get to paint up some sweet new marine goodness.  I got a chance to look at the built models and they look awesome.

~ What are your biggest questions about 9th?