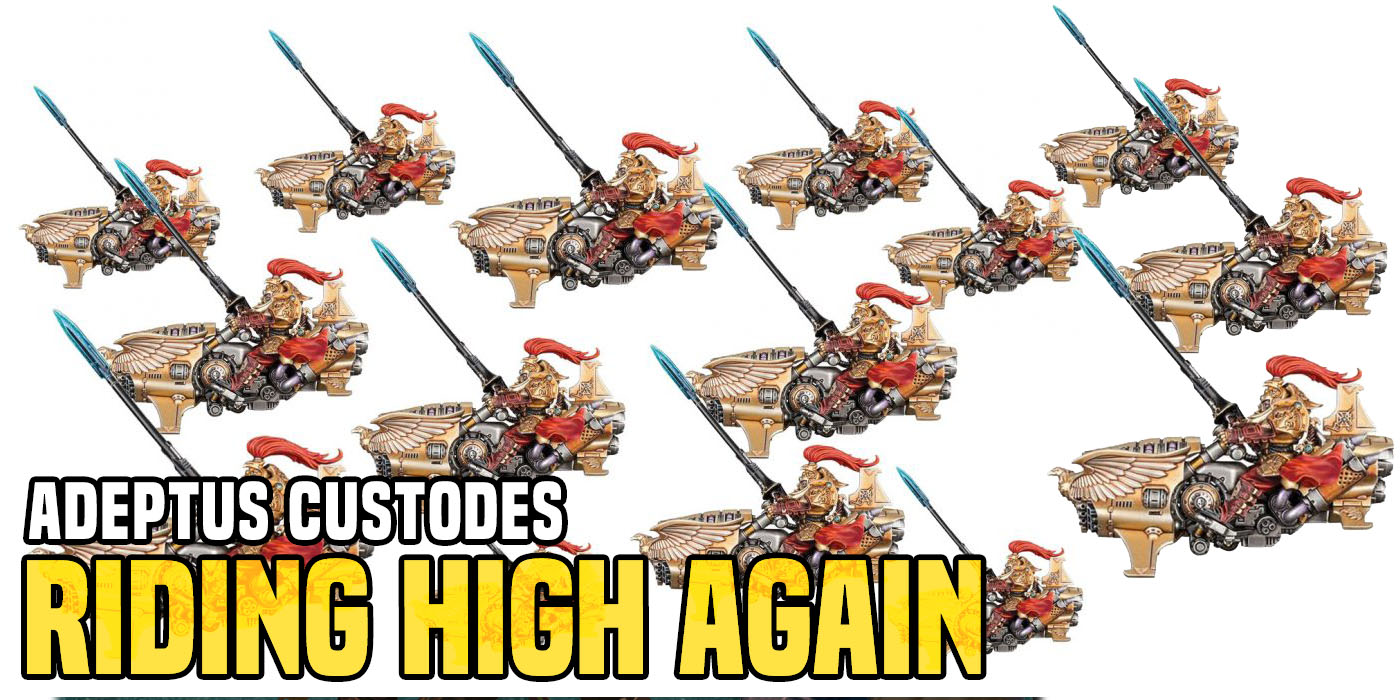 Goatboy here and it seems the Custodes made out pretty well in the new points system.

In fact – it looks like they are going to do very well especially with the missions, extra CP, and just overall design thoughts for the new edition.  You mix a few set of very tough units, no need to get some cheap CP batteries, and some interesting abilities and you start to figure out that maybe an army of gold muscle jerks might be a good thing.

I still think the army is going to be based around the bikes as they are fast, tough, and not being infantry they can shoot things up pretty well.  I wish they had gotten some of the bolter love Marines got – but you can’t be too upset when you a super fast biker zipping around punching things as needed.  I think the biggest help in all of this is just not needing those extra CP friends.  Thankfully we have an ok priced Troop choice with either the Custodian Guard or the Sagittarum Custodians (guys with cool bolters).  The reason why I am even thinking about troops is to look at building the army in the double Patrol method will most likely see most Eldar armies use. 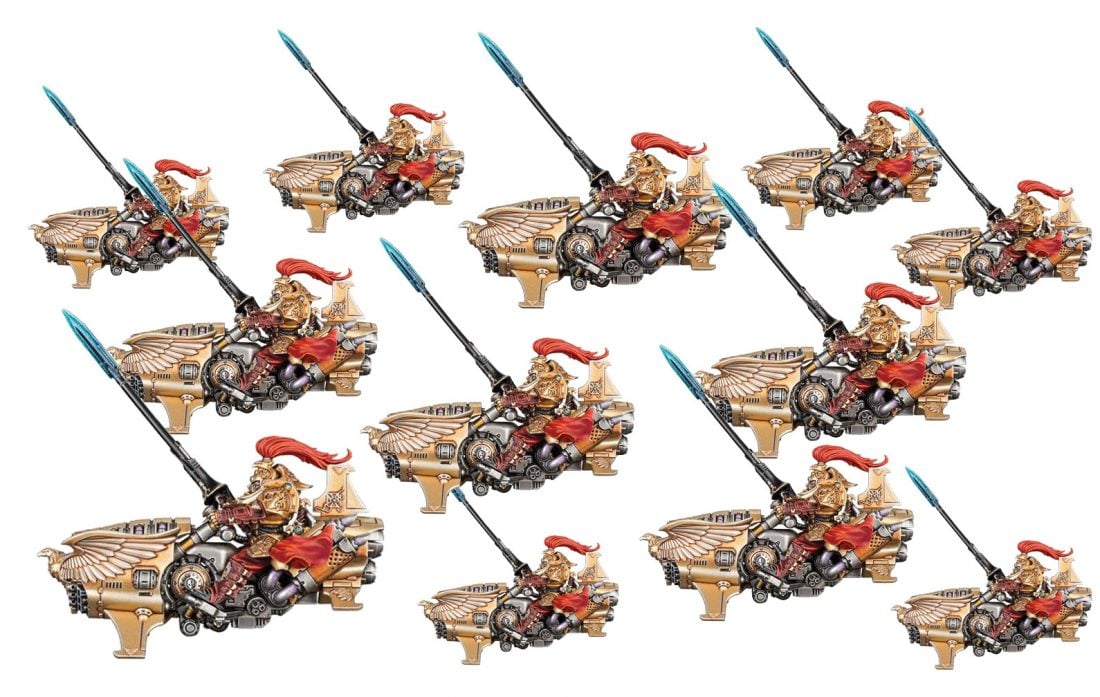 The double patrol gives you access to all the options you need as well as limiting your tax to only 2 troop choices.  This is extremely important for these expensive armies that don’t want to blow 3 Command points on any of the non Battalion/Patrol/Brigade choices.  It also lets you get that extra HQ a lot of armies need to function as their auras and abilities all usually reside in the HQ slot.  It also lets me go hog wild on a ton of random Upgrades on my 3 Shield host biker captains.

Let’s start building this mess.  Will start with 2 Patrols and fill it with as many bikes as we can.

I set this army up to try and just – always protect each other and have options to either Heroically Intervene during your opponents turn with the one “weaker” Captain or set up some options to push hard, hold an objective and bring some damage.  I am wondering if I should give another Warlord trait to the other Captain as the Sally Forth Warlord trait from the Solar Watch could be extremely useful to push a unit of bikers with an advance, get in range with the double tap and blow a whole in an enemies line.  The crazy thing on this army is that it is all Objective secured – so they steal objectives from a lot of people and can be a pain in the butt.  It is also very fast, pretty small, and can utilize those Obscuring ruins to their advantage.  The most annoying thing is should I just not use the Salvo Launcher on the Characters as it is only a single shot versus Tanks and other  vehicles.  I guess it depends on how many vehicles will see – as some people think will see a lot but blowing up is going to be extremely painful.

The tax of 2CP for a second patrol is needed as the troop tax is extremely high for these armies as 150 – 147 is a pretty big tax to deal with.  I know the Guardian spear ones can be powerful in close combat – but I don’t expect the units of 3 to do a ton with spears – while the 3 mans with bolters can throw damage from pretty far away.

What do you guys think?  Is this army going to be worth it?  You can play the missions pretty well and just move fast, ignore enemy and do some pinpoint damage as needed.  The characters are going to be tough and I am trying to set things up where there isn’t a need to burn CP till the late game as needed.  I really wish Victor of the blood games was cheaper and Captain-Commander could be done more than once.  I like the idea of a 9 wound super biker commander with Feel No Pain and a 3+ invulnerable save.

We are back my fellow Custodians – RIDE!