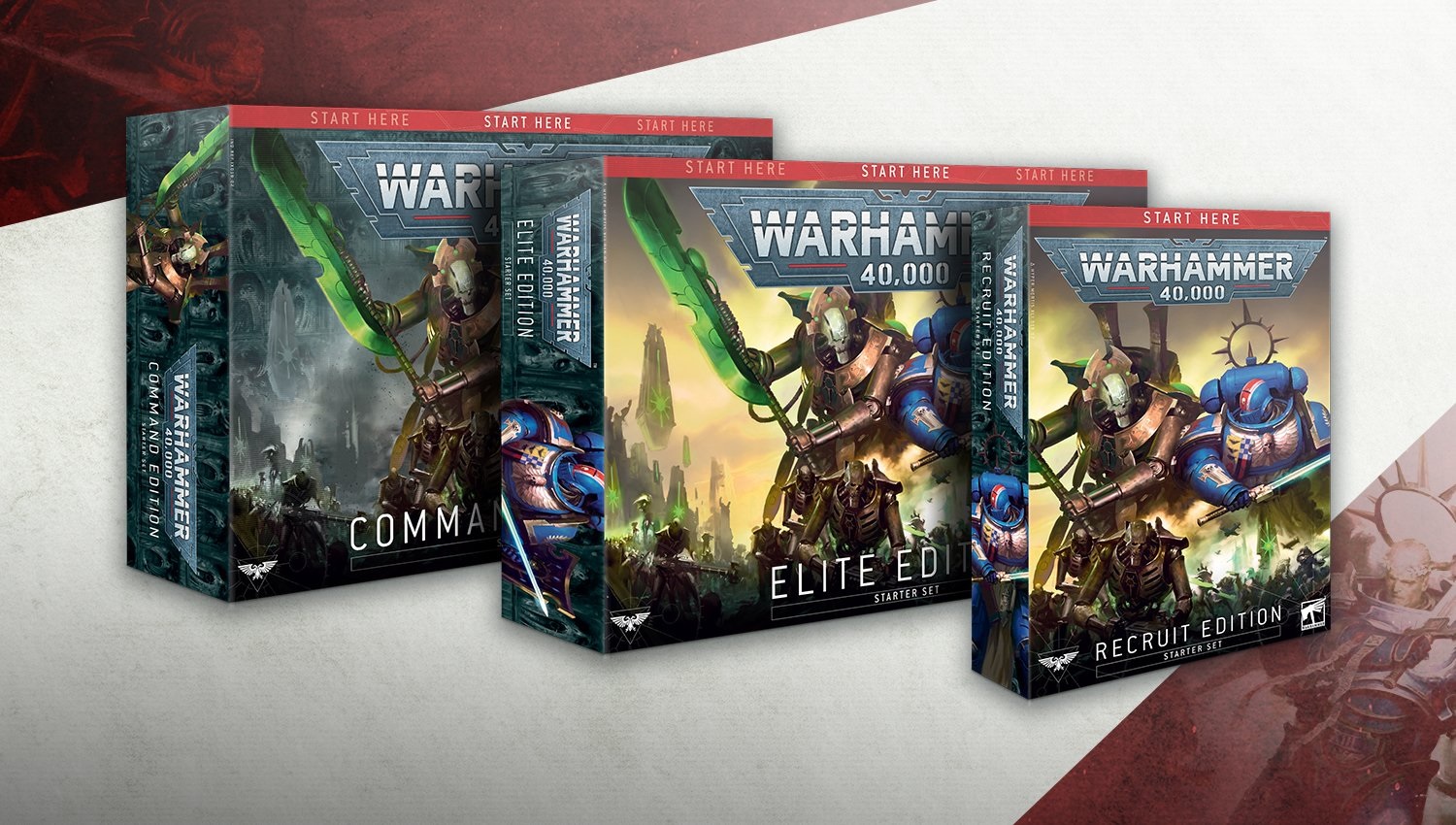 How do the new 40k Starter Sets stack up vs the previous edition? Let’s take a look!

Games Workshop has a new batch of Starter Sets on the way. Today, we’re going to compare them vs their 8th edition counterparts to see how much things have changed. Let’s dive in!

Functionally, these two boxes are the smallest offerings between the two editions. They both come with a handful of models for their respective factions, dice, a play mat, rules, and some terrain (which is really just the box flipped over). Between the two we have to say that the new Recruit Edition is looking much more enticing – and not just because it’s a larger picture. Model-wise, you get a more useful set of miniatures. Who needs 3 Primaris Intercessors or 3 Reivers? That’s not even 1/2 a squad… With the Recruit Edition, you get functional groupings of minis and we really like that better.

Know No Fear vs Elite Edition 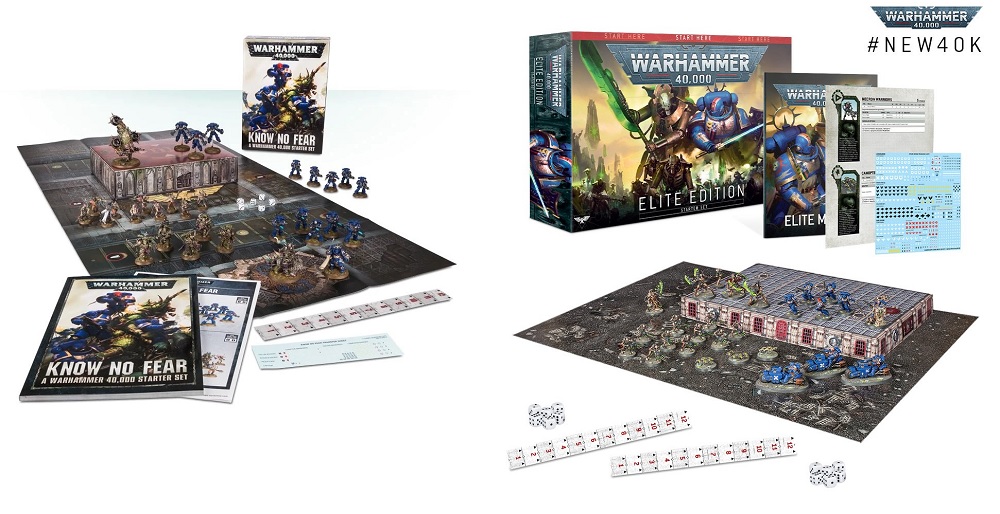 Okay, this one is a bit more balanced in terms of useful miniatures. Again, they contain much the same contents. But we want to give props to the Know No Fear set for really paving the way here. Model wise, while we do love all the new models in the Elite set, that Know No Fear batch of models is really solid! And not just for the Marines with it’s 5 Intercessors, 5 Hellblasters, 3 Inceptors and a Captain – the Death Guard models are really good, too! The extras in the Elite edition are really nice and the models are all new and fancy. This one is much closer and we rolled off to see which one wins. 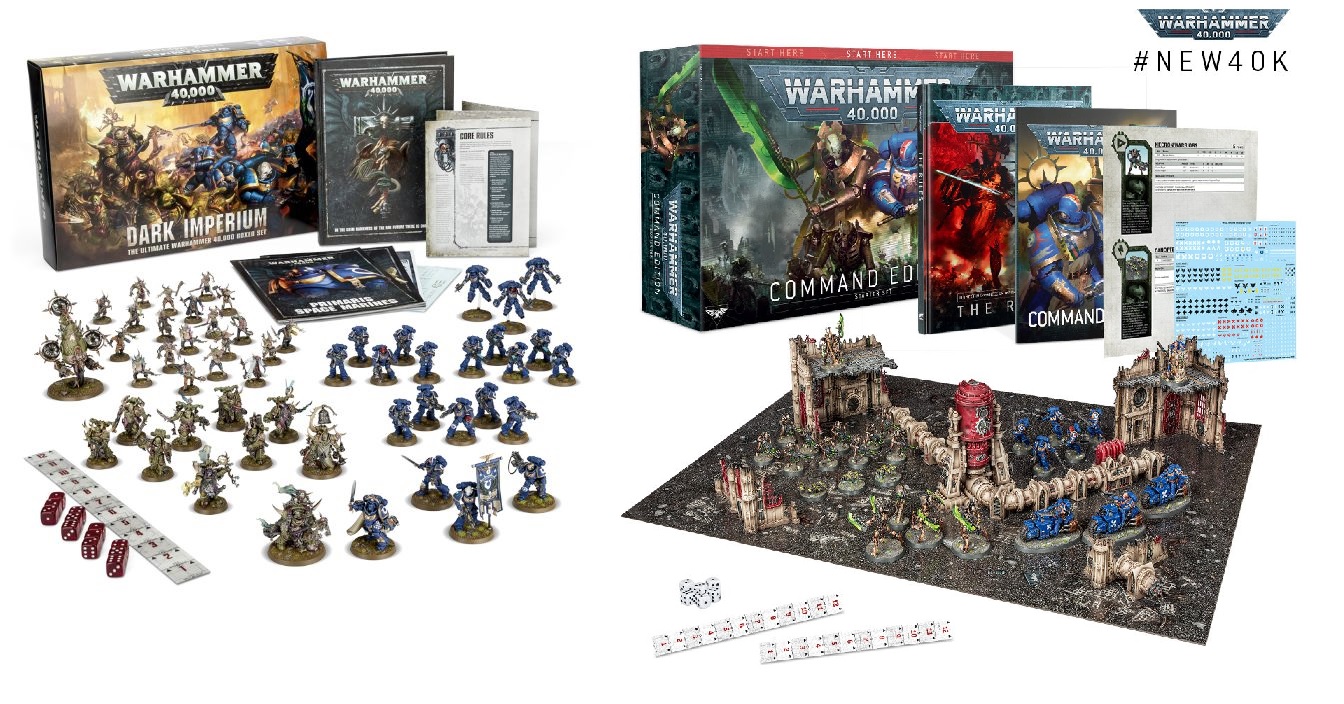 Okay, this one is a tough one. First off let’s talk extras – the Dark Imperium and Command Edition boxes BOTH contain new rule books dice, range finders and all the extras so we’re calling that one a draw. Model-wise, Dark Imperium wins out for sheer number of models. The terrain included is nice for the Command Edition, but c’mon. For a starter box, I want models I can use to play games with… I’ll make due with terrain even if it’s a couple shoeboxes and some random books on the table to represent hills. Also the Command Edition has the same number of models (for their armies) as the Elite Edition. The only differences between the two are the terrain and core books.

While we don’t have price points on these boxes yet, we’re still sticking with our results. Unless the prices-per-box are dramatically lower, we don’t think it’s going to change our minds. What do you think about the terrain kit in the box? Would you rather have that or more models to play with? We want to hear your thoughts in the comments on the Dark Imperium vs Commander Editions!

Do you like the new Line-up of Starter Boxes? Which one is your favorite?