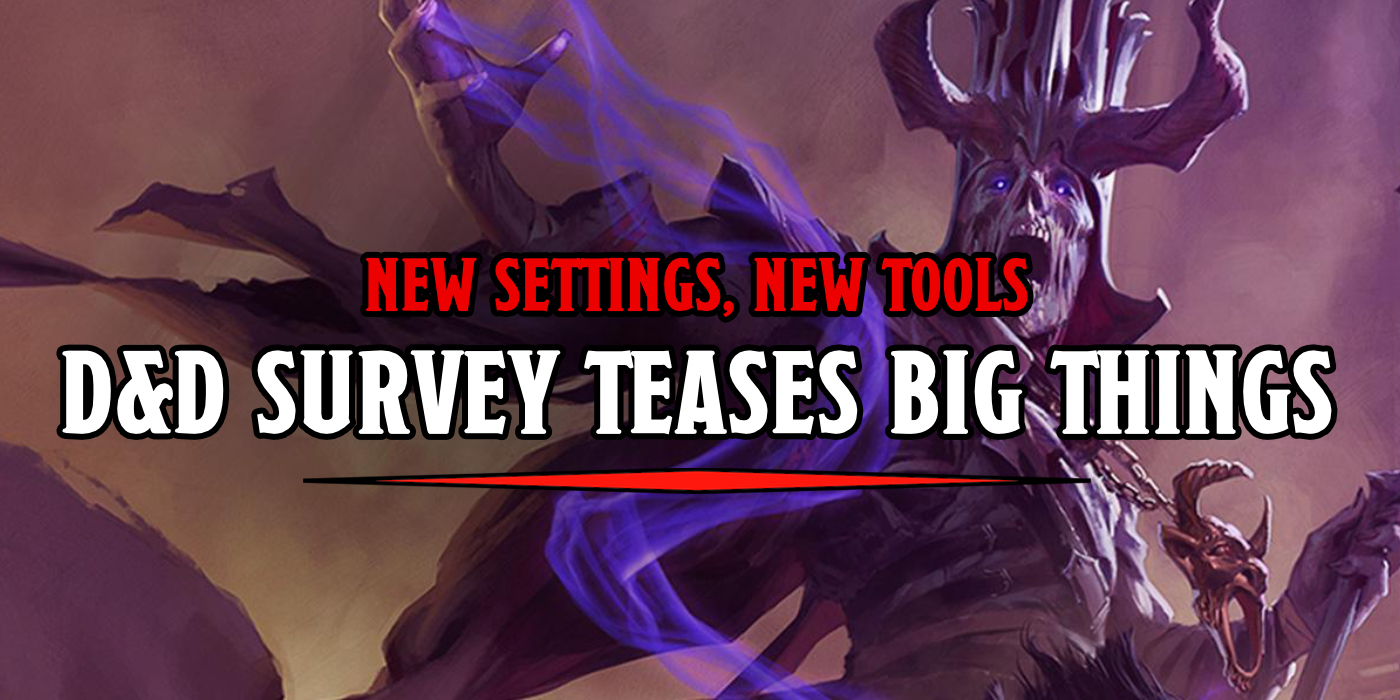 One of the biggest things that led to the downfall of TSR was an inability to connect with their audience. In the aftermath of TSR’s dissolution and the launch of D&D 3rd Edition, Ryan Dancey, who would go on to develop the OGL described it thusly:

I know now what killed TSR. It wasn’t trading card games. It wasn’t Dragon Dice. It wasn’t the success of other companies. It was a near total inability to listen to its customers, hear what they were saying, and make changes to make those customers happy. TSR died because it was deaf.

Community feedback is a lesson that WotC took to heart, and so it goes with a new survey they released just a short while ago, asking for feedback to “Help shape the future of the game.” 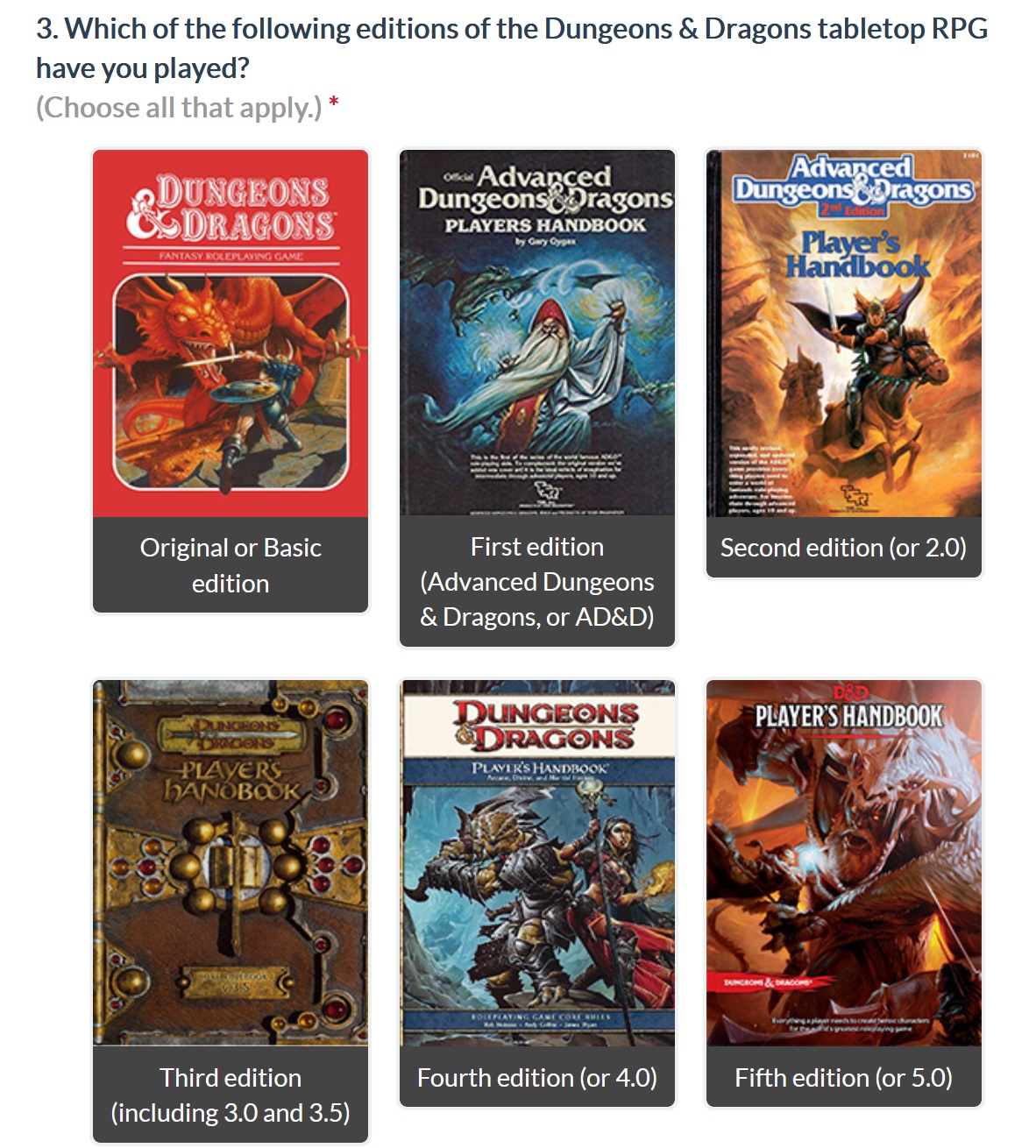 Now, it starts with your typical marketing research questions: which editions have you played, how often have you played, and what are your preferred methods of play–but the survey gets a little more topical, and from the questions, we can glean some insights as to what WotC is working on next. We’ve taken the survey, and you can find it linked below–but look at what WotC is working on: 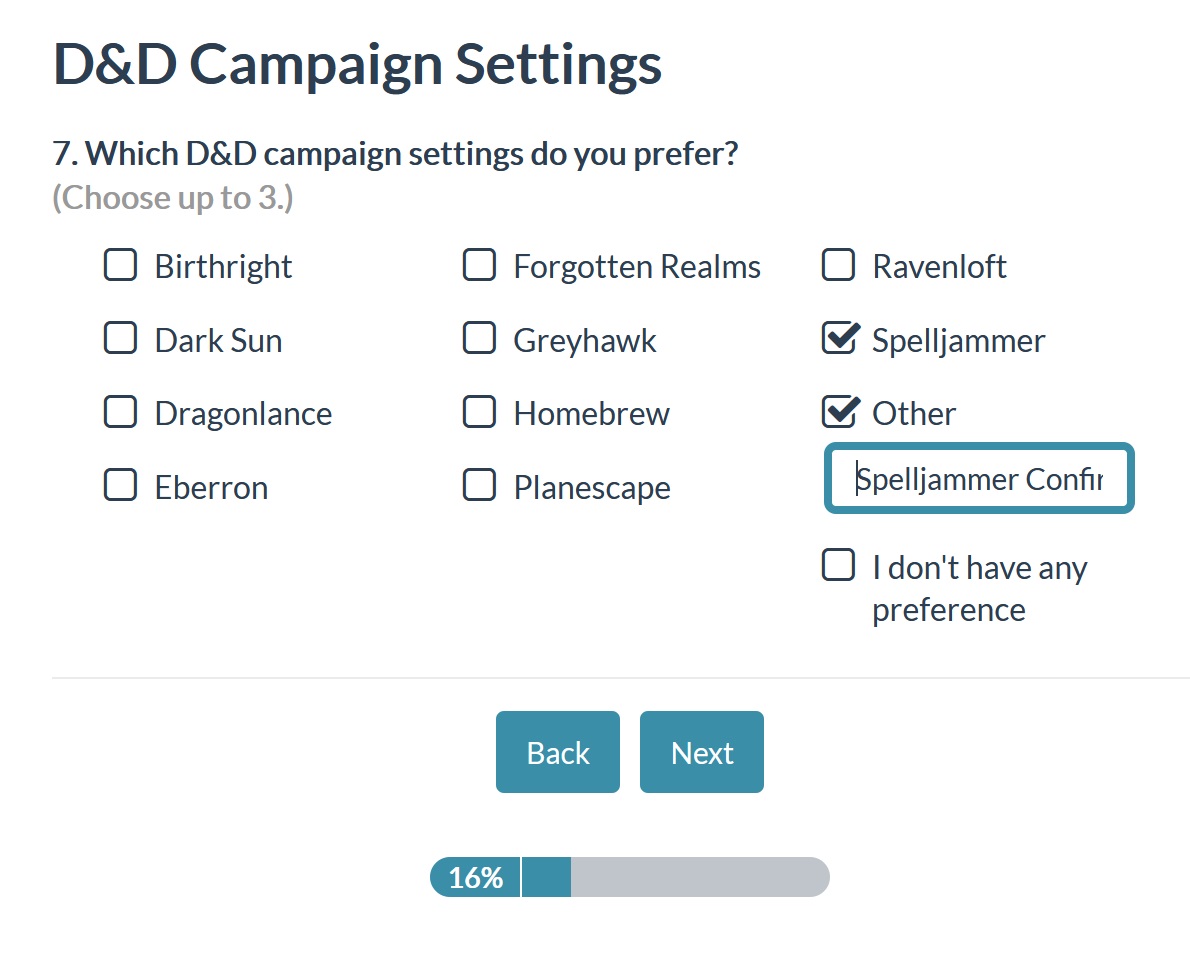 This is a telling question, and it comes in only 16% of the way through–it’s the first major section as you get into the quiz. The survey asks what settings you’ve played in, what settings you prefer, and why, featuring a number of popular settings from throughout D&D’s history. This lends a lot of weight towards the eventual release of a new setting–and as a reminder, it was feedback to a survey like this a few years back that led to the creation of the Eberron test material on the DMs Guild, which in turn led to Eberron: Rising from the Last War. With as much information as they’re looking to gather on settings–it seems like a new book is on the horizon. 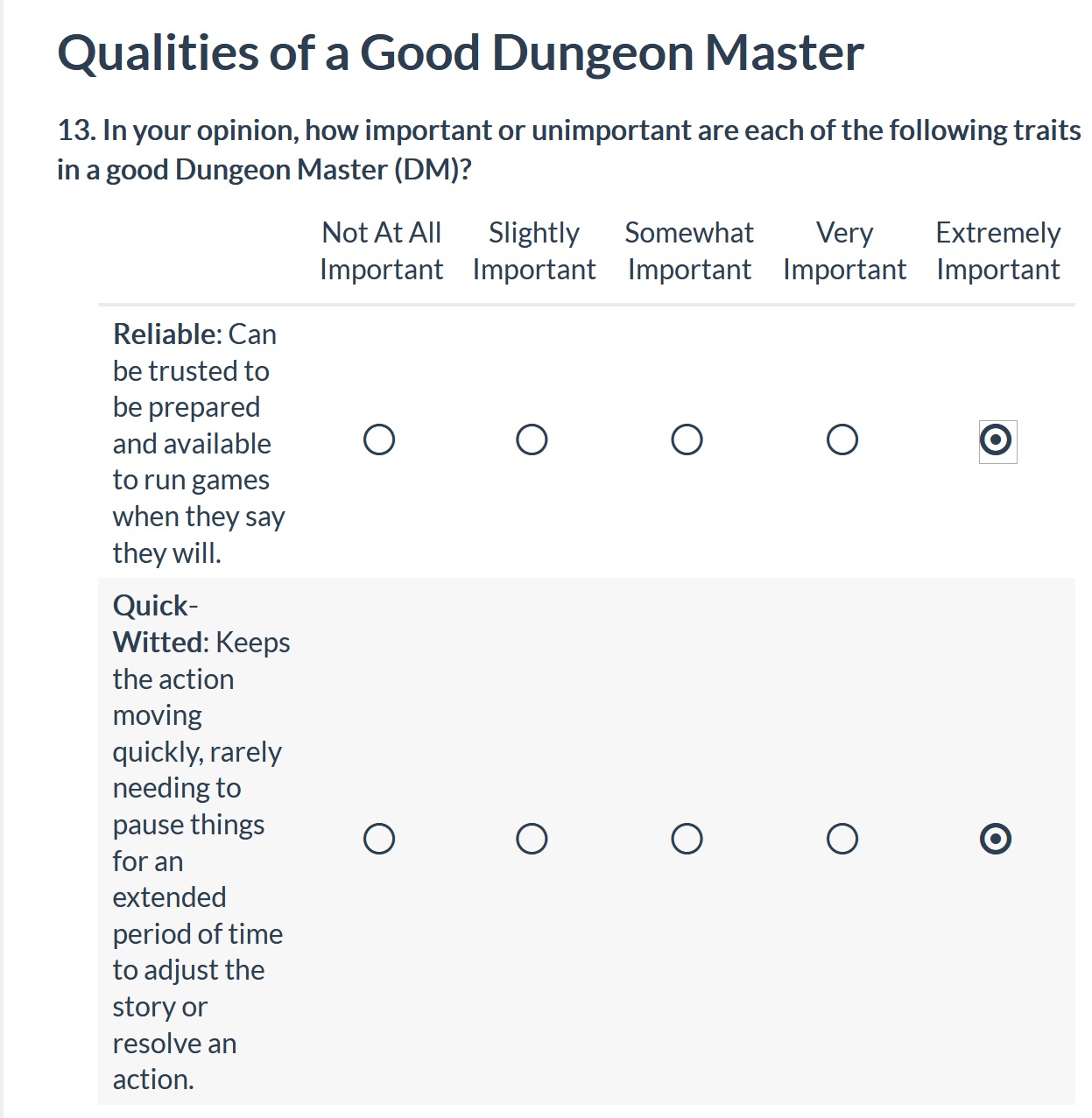 Though much, much closer to us is a set of digital tools, as most of the other questions reveal. Innocuous questions like what makes a good Dungeon Master bleed into questions about whether or not you’ve ever DMed, which feeds into the marketing goal of: what do you need help with when you DM. 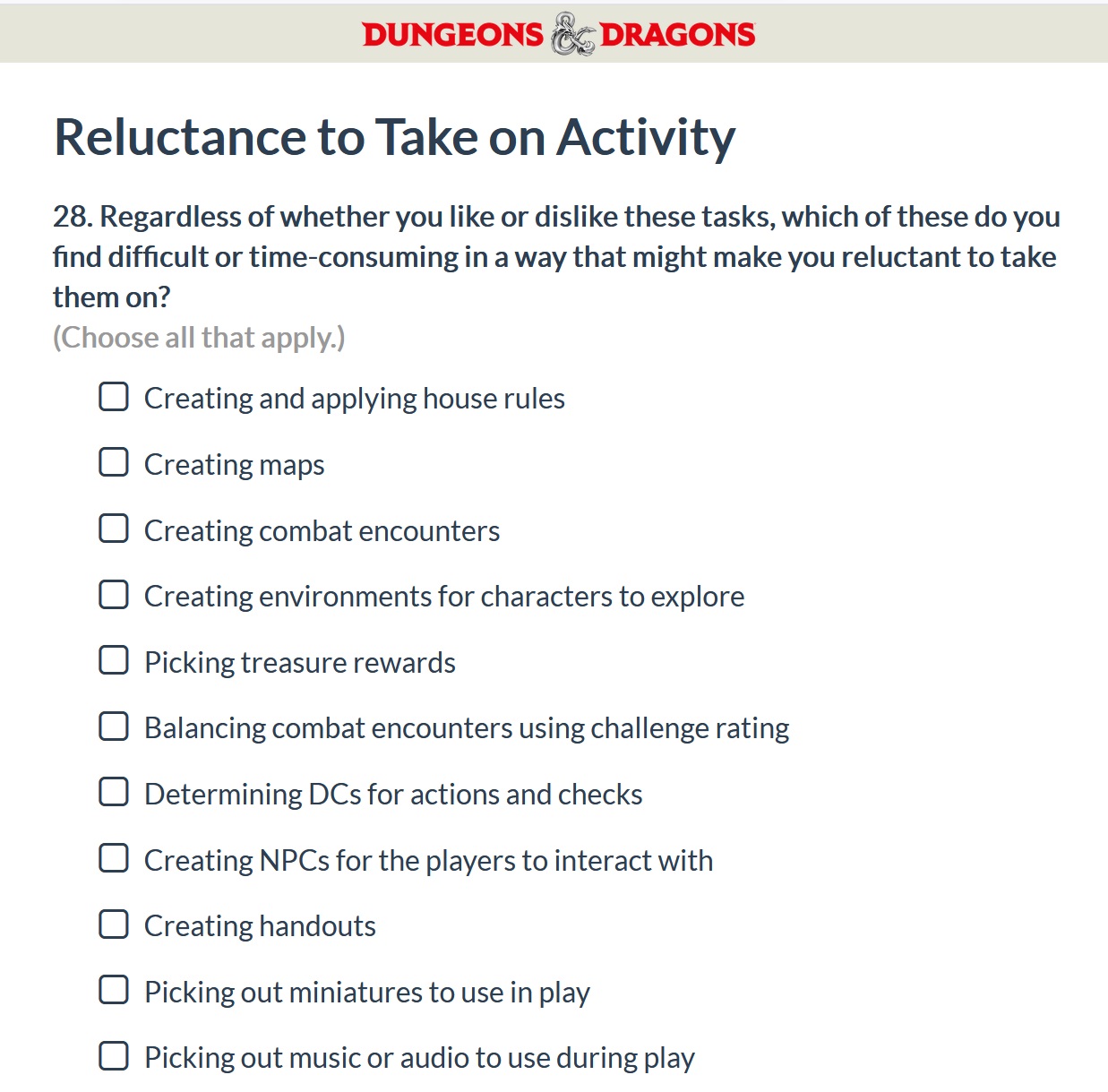 They get much more blatant about it with their next one: 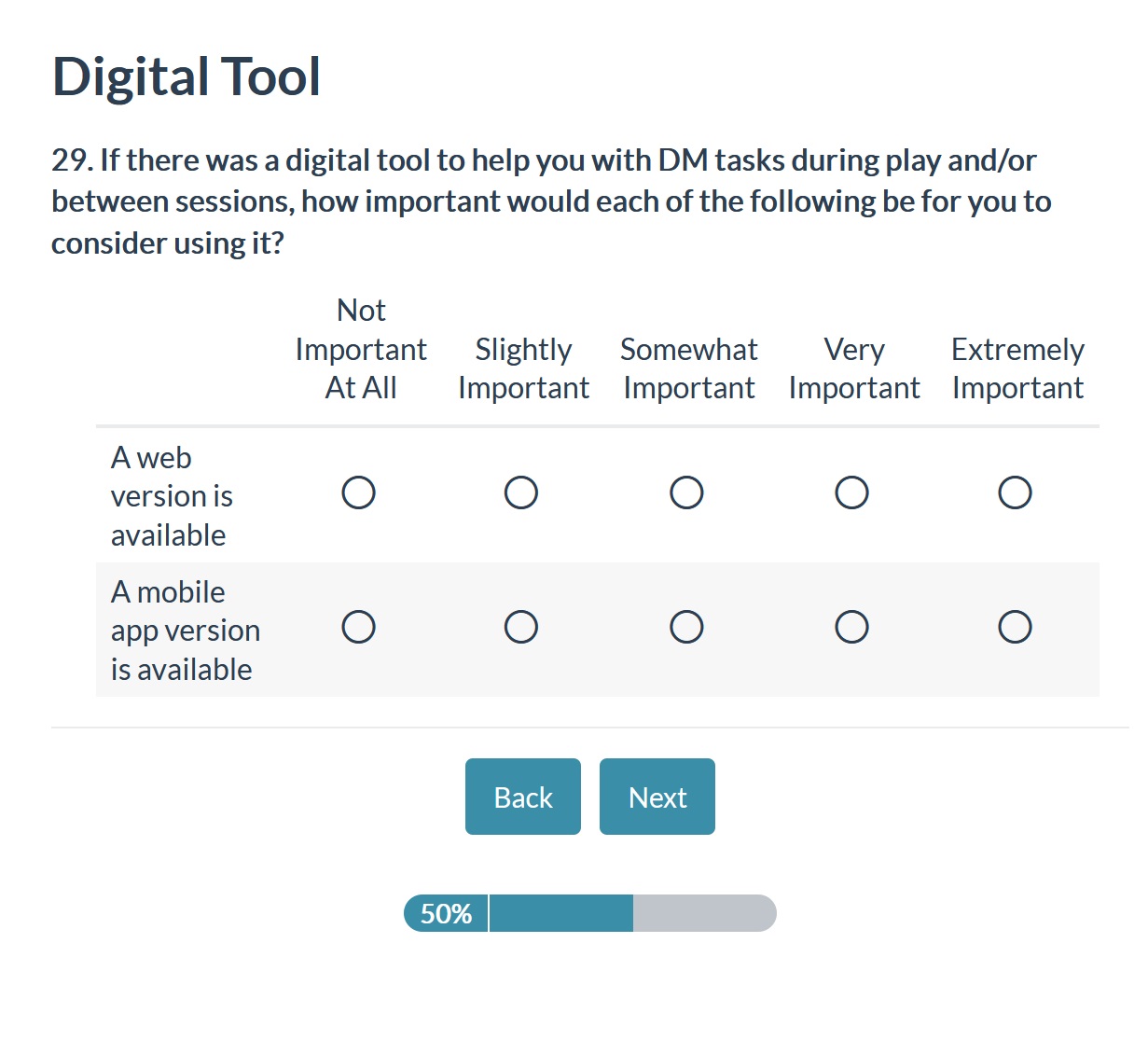 And from the scope of these questions, D&D is considering all options when thinking of what sort of toolsets to develop. From what the survey reveals, it seems like WotC is trying to pivot to address the need of a pandemic-stricken world. They want to know what you use when playing in person, or when playing virtually: 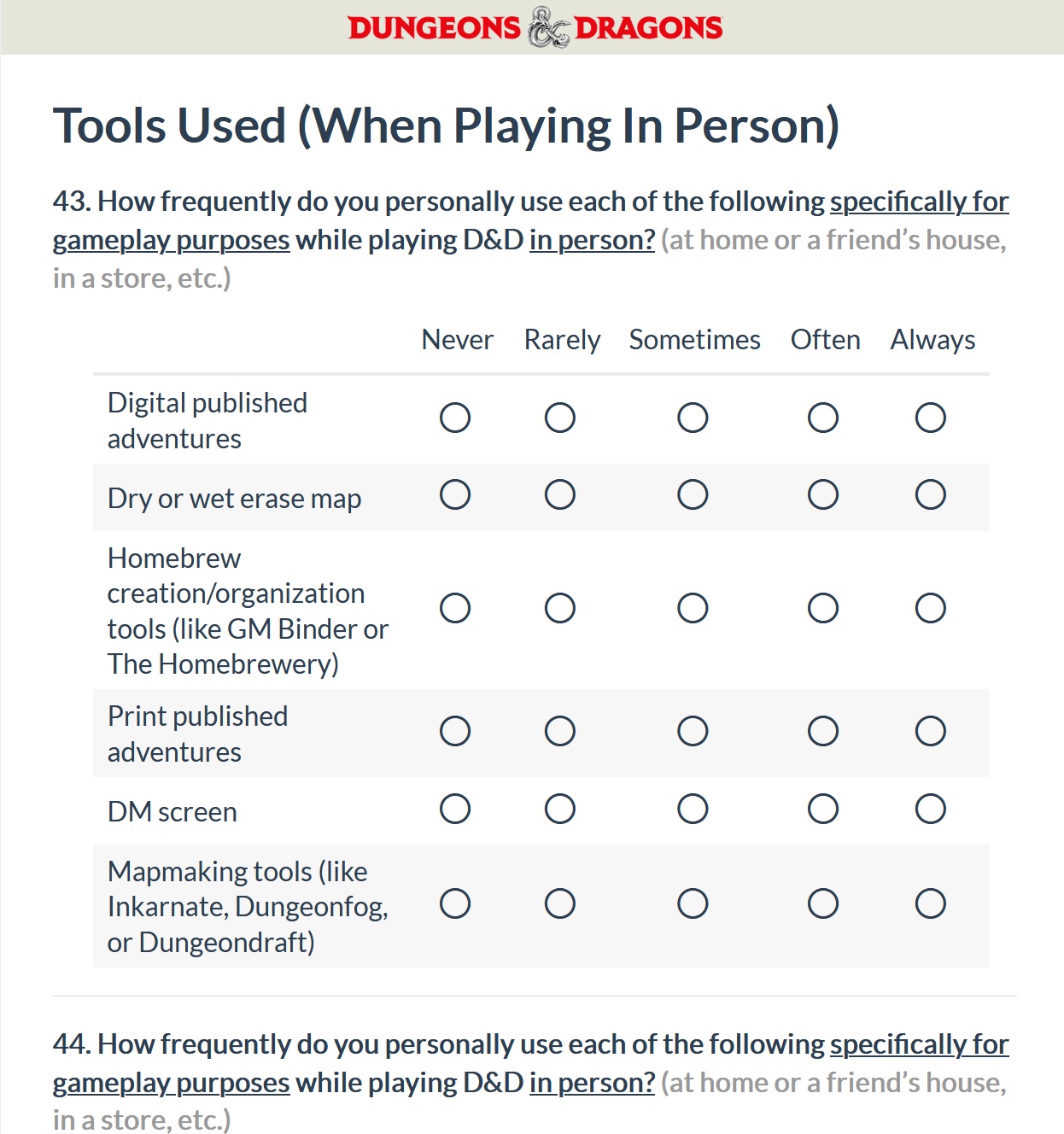 Along with questions that feel vaguely ominous like: how likely are you to play in public once COVID restrictions are lifted.

Either way, it looks like WotC is planning something for their own digital toolset, which is an interesting move considering that, right now, they’ve outsourced much of that to D&D Beyond. They’re the ones who make the official character sheet, whom WotC promotes, and who are tightly woven within the community. If WotC (or more likely Hasbro) is looking to integrate, perhaps they see recent moves by D&D Beyond’s owners, Fandom, into the RPG sphere as competition, and want to bring things under one roof?

Or perhaps they’re looking to acquire D&D Beyond out from under Fandom, while Fandom explores their own RPGs like the upcoming Masters of the Universe RPG or the Dragon Prince RPG, both of which are fairly popular licenses that should give the a strong boost out of the gate. Though there’s not much comparing with D&D’s massive hold on the TTRPG market. Whatever the motivation, look for a new set of tools soon.

And, as WotC puts it, they are especially interested right now in hearing from underrepresented groups, so if you’re looking to give feedback, they seem willing to listen.