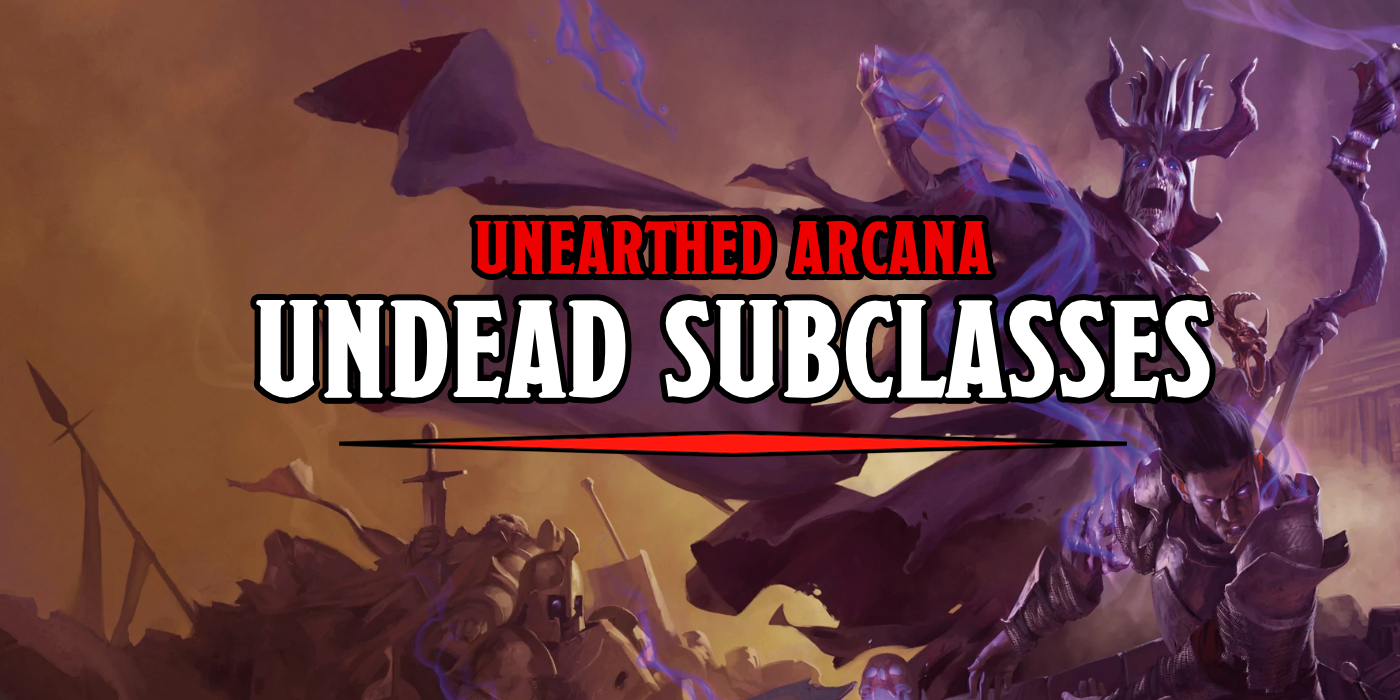 Undead creatures and spirits are at the heart of the latest Unearthed Arcana, with two new subclasses for the Bard and Warlock today. Check ’em out!

Two new subclasses have been revealed in the latest Unearthed Arcana, both centering around the idea of calling upon powers beyond the pale. The College of Spirits Bard calls upon the stories and spirits of the past–from beyond the material plane, while Warlocks with an Undead patron, make dark pacts with powerful undead beings (like Acererak) to acquire eldritch power and a dreadful new transformation. 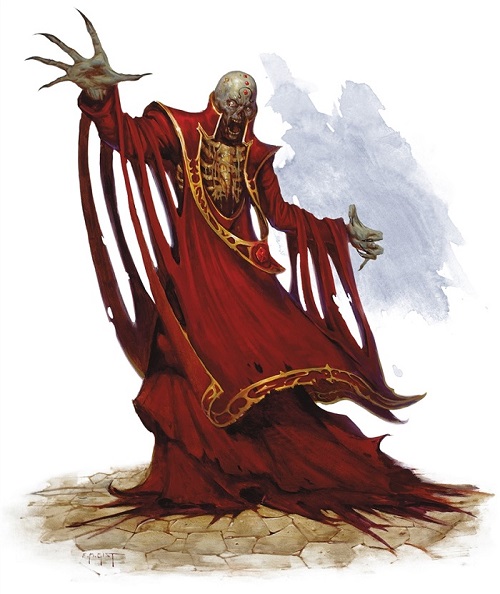 Both of these classes are good candidates for whatever book is slated for a November release, they have a loosely extraplanar focus to them, making them similar to the Aberrant Mind Sorcerer or the Astral Soul Monk–but it’s an awfully short time for something to be in a book that releases November. June/July was the cutoff point for Xanathar’s Guide. Instead, I think we might be seeing a sneak preview of one of the upcoming Ravenloft books. Come on this journey with me.

Back in June, when Wizards of the Coast released their big Diversity Statement, one of the bullet points mentioned “two upcoming books” that would portray the Vistani without relying on harmful stereotypes. Now, there’s no guarantee that the “two upcoming books” are a return to Ravenloft, but it’s a pretty reasonable assumption to make–the Vistani are an iconic part of Ravenloft. And we know that WotC likes to blend narrative and mechanics, especially where subclasses are concerned.

Look at the Unearthed Arcana from February of this year, which featured the Bardic College of Eloquence and the Paladin Oath of Heroism, which became the Oath of Glory when both of these made their debut in the Mythic Odysseys of Theros. There’s a good case to be made that we could be seeing a Ravenloft campaign setting sometime in the near future.

But let’s leave speculation aside for now, and focus on the subclasses at hand. 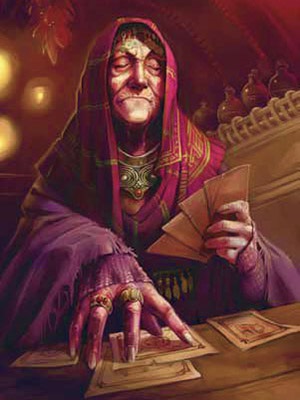 The College of Spirits is all about the stories of the past, learning the lessons they hold, adhering to their philosophy, and of course, drawing upon the powerful magic bound up in them. Bards from the College of Spirits reach beyond the material plane for stories from spirits and can draw upon their power, though they don’t control what power they unleash.

It’s an interesting concept. The core class feature is Tales from Beyond, which lets you spend a bonus action and a Bardic Inspiration Die to hear a tale from a spirit. You don’t get to choose which effect you generate, instead you roll your Inspiration Die and consult a table to determine which tale the spirits have for you. Then you spend an action to use it. You can store one of these tales until you need it (or until you finish a rest), so it’s adventuring prep that can be done between encounters, or even in the middle of one, since it only takes a bonus action. Here’s a look at the table:

This is part one of the table–there are 12 effects all in all, which means that you’ll unlock access to more as your Bardic Inspiration die grows. That’s a cool mechanic for tracking your progression, as you become more powerful, you gain access to more Spirit Tales.

But you don’t get access to the full list until you’re 15th level. So, for the most part get used to the 1-6 results. Of course, this isn’t the only feature. College of the Spirit Bards also learn the guidance cantrip, and use a Spiritual Focus, which is some kind of occult implement, like a candle, a crystal ball, a “talking” board (guess Ouija doesn’t exist in D&D), a tarokka deck (I see you, Vistani), or a skull. This is a spellcasting focus, but it also serves as a means to empower your spell; at 6th level, you can roll a d6 any time you cast a bard spell that deals damage or restores hit points using your focus, and add whatever you rolled to one roll of the spell.

The rest of the class is equally focused on spirits. At 6th level Spirit Session lets you conduct an hour-long ritual with your friends, allowing you to channel spirits and temporarily learn one spell of your choice from any class, as long as it’s not a higher level spell than your proficiency bonus, and is either Divination or Necromancy. Then you get to add it to your list of spells known for the day, which adds even more flexibility to the already versatile Bard.

The capstone, Mystical Connection lets you use a d6 instead of an Inspiration Die to power your Tales from Beyond, so you’re limited to the first half of the option, but you can roll a d12 for whatever effect your d6 initially revealed. All in all, it’s a cool class–it has a distinct medium/fortune telling vibe to it, which you can lean into with the spells a Bard already has access to. If you like Wild Magic, this is good times. 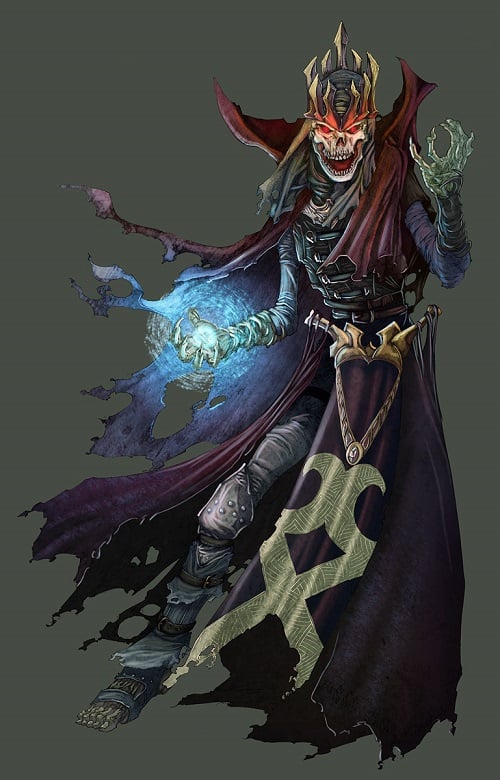 The Undead patron Warlock, meanwhile, is what the Undying patron always wanted to be. It’s a little overpowered, which is fine–WotC usually aims high and then dials it back–but for now, it’s brutal. They don’t beat around the bush with “some kind of being that has achieved immortality” either, you specifically make a pact with a powerful, ancient undead being like Acererak, Azalin, Lord Soth, or Strahd (or whatever you decide, this isn’t a Ravenloft hint).

And while selling your soul to a Lich or a dracula might not seem like the best idea, it gets you an expanded spell list that includes some pretty substantial debuffs, and death ward, making this Warlock one of the few things to have access to that spell. You also gain greater invisibility, so 7th level is a real boost to power level, since you can reliably be invisible and attacking in nearly every encounter, depending on how many your DM throws at you. If you’re at a 1-2 encounters per session per rest table? This is incredible.

But don’t worry, even if you’re at a table where you don’t get to short rest in between every encounter, you’re still incredibly powerful. The main feature of the class is the Form of Dread, which replaces the Hex or Curse features of other Warlock subclasses. The Form of Dread is a transformation that you take on, manifesting an aspect of your patron’s power. What does that mean, in game terms?

Spend a bonus action, and for one minute, you transform with cool undead special effects like a shroud of shadows making a robe and crown, or having an aura of bats or whatever, and gain:

You can transform up to your proficiency bonus times per long rest. And that’s already pretty good, but what really kicks this into overdrive is the 6th level feature Grave Touched. For starters, you don’t need to eat, drink, or breathe, which is cool. But the main course is the ability to replace the damage type of an attack with necrotic damage. You have to make an attack roll, so it could be with a knife or with, say, Eldritch Blast. One last kicker: while you are using Form of Dread, you can roll one additional damage die when determining the necrotic damage the target takes. 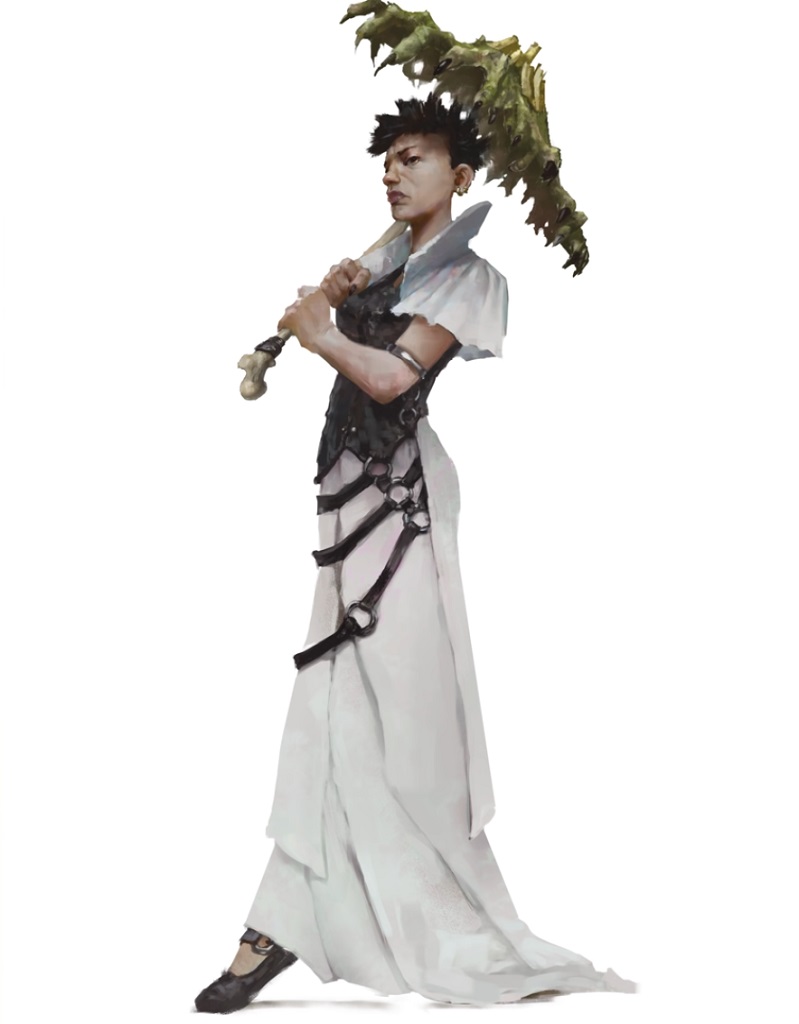 This means you effectively can double the power of your Eldritch Blast for a minute at a time, because you’ll take your 1d10+Charisma modifier, and transform it to 2d10+Charisma modifier per attack in the Eldritch Blast. So at 6th level, that’s a potential 4d10+(Chax2), and that’s assuming you don’t crit. It’s very strong–though it does change the Eldritch Blast’s damage from Force to Necrotic, which I guess has a slightly likelier chance of being resisted, it’s still pretty incredible.

The other features are equally as good. At 10th level, you get Mortal Husk, which makes you immune to necrotic damage in the Form of Dread, and also will revive you if you drop to 0 hit points–when you drop, you can explode, dealing 2d10 + your warlock level to creatures within 30 feet and popping back up. This is the earliest avoid death effect outside of being a Half-Orc.

The Capstone feature, Spirit Projection lets your spirit exit your body which confers a number of benefits:

You can only do that once per long rest, but it lasts an hour, so you can get a lot of theoretical mileage out of it.

And those are the new Subclasses. Will we see them in November? In Ravenloft? We’ll find out.

What do you think? Let us know in the comments, and Happy Adventuring!