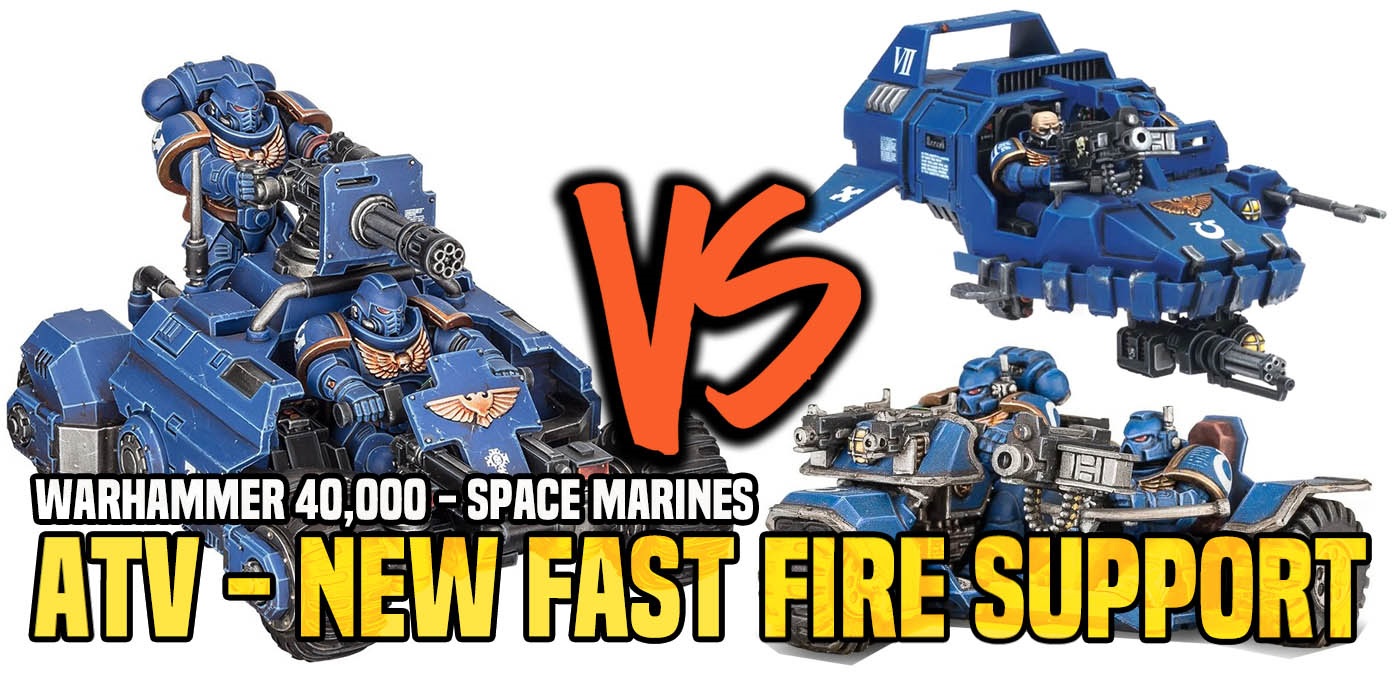 We’ve gotten a look at the rules for the new Invader ATV and while we still think it needs some ground clearance it’s got some potential to to fill a combat role. But looking at the Space Marine Armory there are already some options that are going to compete with the Invader. Today, we’ll look at the stats for the Invader and compare it to the obvious units that fill a similar role to figure out if it’s a good candidate to take that slot.

First up, here are the stats of the Invader ATV: 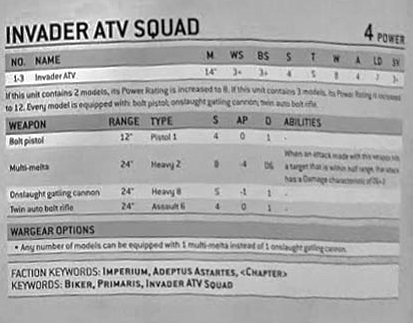 The key things are that it’s squad size is 1-3, has a move of 14″ and have a toughness of 5 with 8 wounds. Weapon wise, it has options for a bolt pistol, onslaught gatling cannon or multi-melta, and the twin auto bolt rifle.

Let’s look at an Attack Bike next: 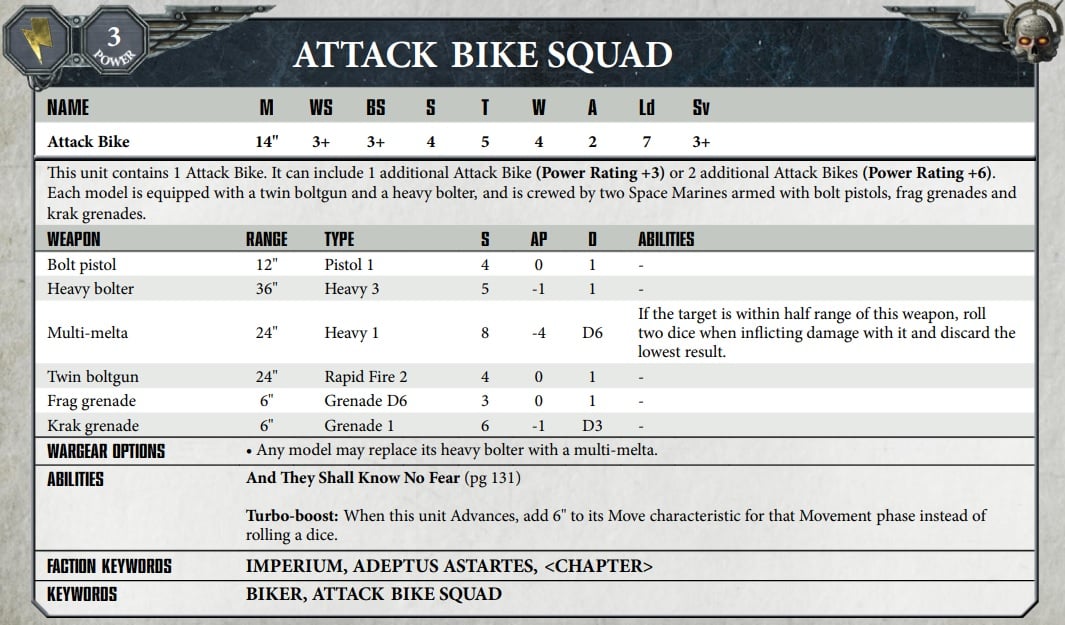 The Squad size and movement are the same. It’s even got a toughness of 5 as well. However, it’s only got 4 wounds and half the attacks of the ATV. Firepower wise, it’s got Bolt pistols (2 of them actually), a twin boltgun, heavy bolter or multi-melta, and frag and krak grenades.

We’re going to assume that the Multi-melta options will all be updated to be aligned – eventually. Regardless, it’s still pumping out less shots than the ATV and while it might have grenade options, it’s still doesn’t have the same damage output. On the plus side, Attack Bikes DO have turbo-boost – so it does have that going for it!

And finally the Land Speeder: 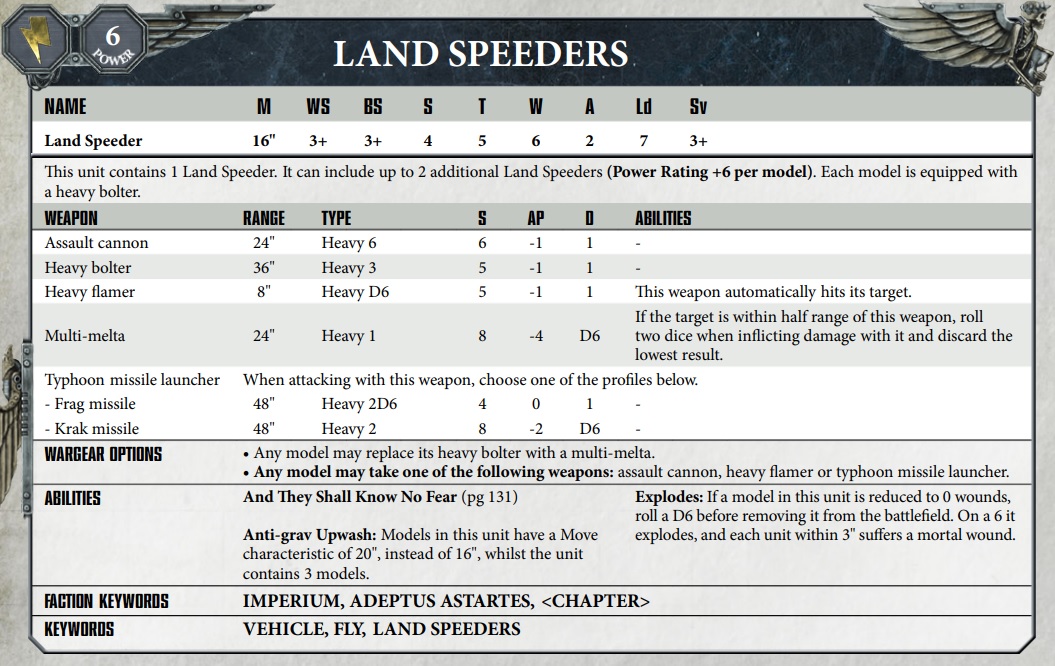 The Land Speeder is faster by 2″ but has 6 wounds and only 2 attacks in close combat. As far as firepower a Landspeeder comes base with a Heavy bolter. You can replace the heavy bolter with a multi-melta. And in addition you can add an additional assault cannon, heavy flamer, or typhoon missile launcher. To make the comparison as fair as possible, we’ll say that the Land Speeder is equipped with a multi-melta and assault cannon.

Additionally, if you take a squad of 3 the unit’s move is boosted to 20″ and it can also explode for extra fun.

For simplicity sake, we’re just going to compare them as solo picks – no Anti-grav Upwash or additional models. And, as mentioned, we’ll compare them with the closest load-outs as possible. So everyone is getting a Multi-melta and bolter-hose option.

Speed: While the Land Speeders have the highest movement value, the Attack Bikes can boost to cover more ground. The ATV is the slowest of the bunch.

Firepower: The ATV is tied with the Land Speeder for damage potential (assuming multi-meltas got updated). The Assault Cannon has the same number of shots as the twin auto bolt rifle – but the assault cannon is better.

Toughness: The Invader ATV wins this category flat out with T5 and 8 wounds vs the others.

Other: While the Land Speeder does have Fly, it’s not quite as potent as it was in the previous edition. It still allows for the most freedom of movement. Plus it can blow-up and perhaps take out an enemy on the way. One other funny quirk is that the Invader ATV rules don’t list “Angels of Death” or “ATSKNF”- is this an oversight and does the Invader ATV get those rules from something else or does it just not have those rules? Anyhow, the Land Speeder still wins this category. 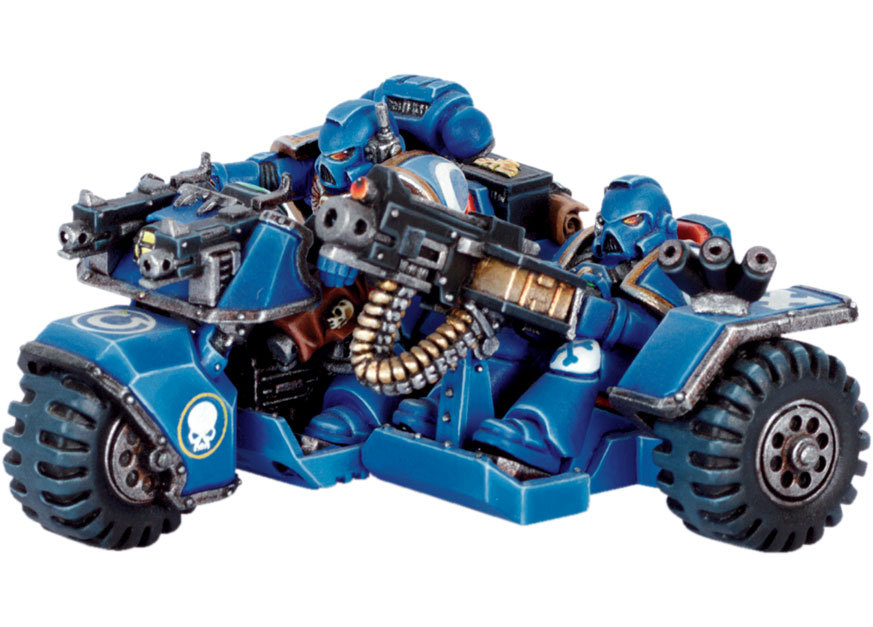 Looking at the three units, it’s easy to see they all fill the same combat role – fast moving fire support. The Land Speeder is still better than the Attack Bike in many ways but it’s also 35 more points than the bike. The ATV lands right in the middle of these two in many other ways as well – but at the end of the day, it’s still tougher and on a wound-per-point basis. Plus it has the best damage potential per points so it’s actually the best deal for the points.

At the end of the day, the ATV is tougher and packs quite a punch and, while it doesn’t have the same speed or mobility, it’s still going to move pretty quick and fill that same role. So it the ATV a replacement for the Land Speeder or the Attack Bike? If you’re wanting to run an entire Primaris force – the answer is: YES. 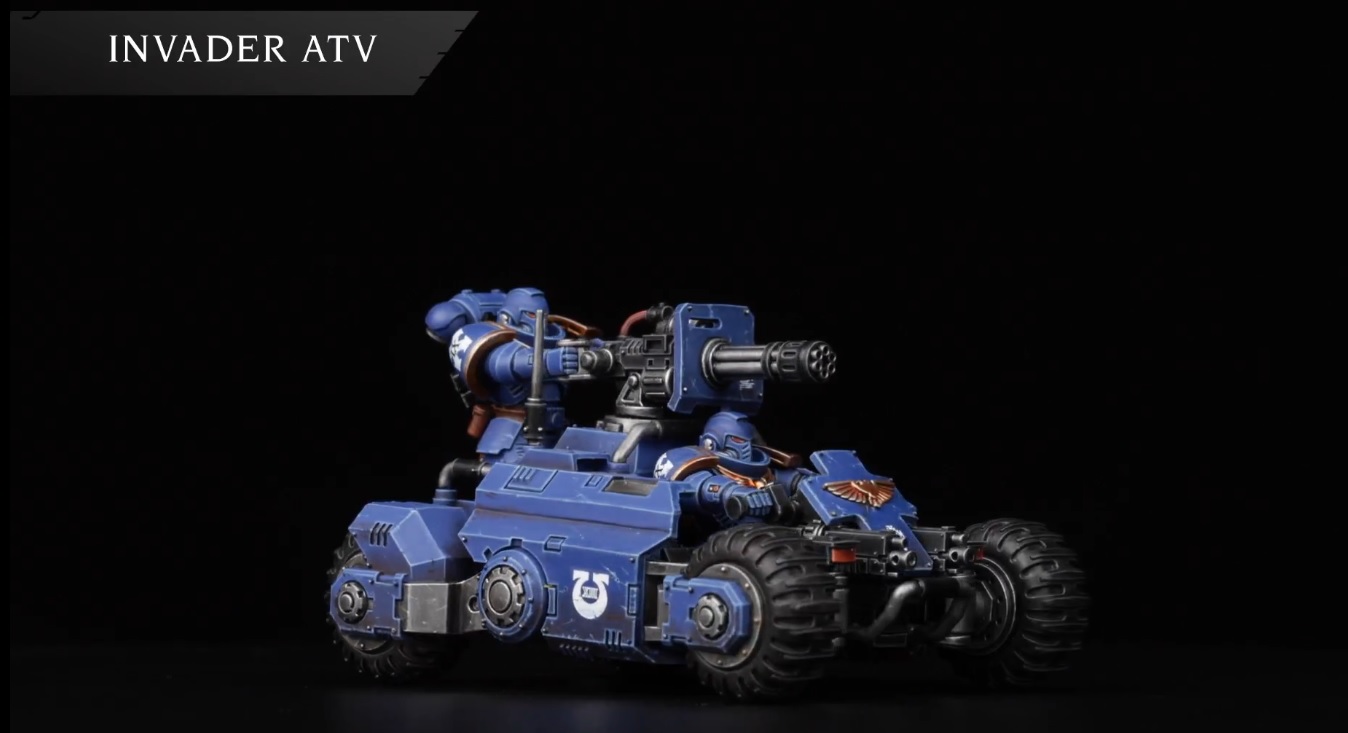 Is the Invader ATV a replacement for both? Or neither? Or just one but not the other? Let us know what you think in the comments!