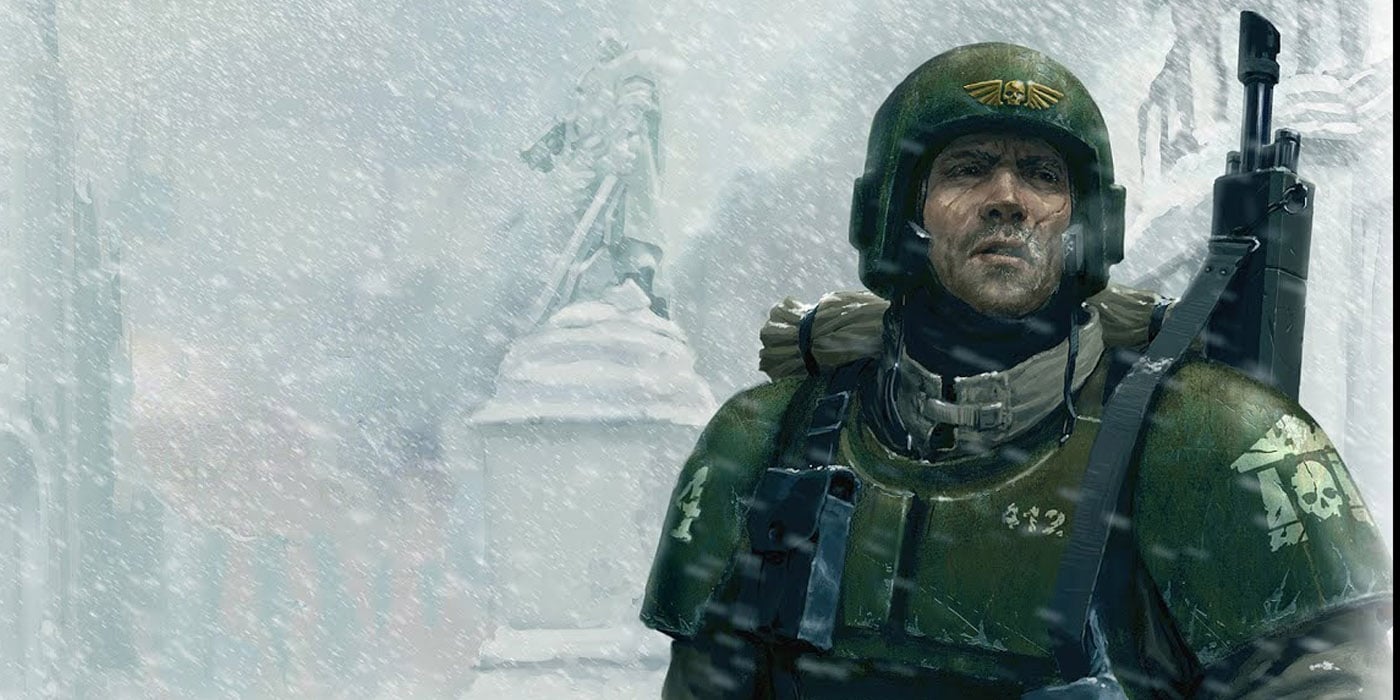 As I get back into the swing of playing regularly (moving the business and all the employees to a new state, the LVO, pandemic, etc. really disrupted my regular play schedule) I’ve been relearning how to play Guard in this new edition and wanted to share a few tips and tricks I’ve picked up along the way.

Vehicles are BACK, baby!

Guard vehicles were always pretty good and often seen on the tabletops but with the changes to 9th ed 40k, they’re even better. My favorites have been:

Demolisher Cannon Tank Commanders: The changes to how Demolisher Cannons work, and the increase in multi-wound infantry, vehicles and monsters means its main cannon is much more viable and the ability to shoot into combat is a welcome buff. Typically I run 3 Heavy Bolters and with the impending 2 damage buff GW mentioned, they will only get better. The increased BS and ability to use tank orders is just icing on the cake for these guys.

Double Heavy Flamer Chimeras: These have been a real gem of a unit for playing the objective game. I have tried running both Infantry Squads in them as well as decked out Veterans. The Infantry squads are great for hanging out in the Chimeras and then jumping out, using Move, Move, Move! to then take an objective away from an opponent to give me the advantage on the primary, or to hunker down on an out of the way objective and start scoring points. The Veterans on the other hand tend to jump out and blast something, then hope they don’t get smoked in return. Either way, this combo has proven quite useful.

Sentinels: are great for taking objectives, particularly the Scout Sentinel which can do it right away on turn 1 with it’s scout move in some scenarios. They’re fast, and tough enough to be a pain in the butt to get rid of for a very reasonable points cost. I typically take at least 2 of them for this exact purpose.

Bullgryn: are still smacking faces in the name of the Emperor! The new coherency rules make it a bit tougher to get maximum effect out of them I have found, but I still really enjoy using mine and they strike fear into your opponents, usually taking mid board pretty easily. With the usual psychic buffs of Night Shroud and Psychic Barrier plus the Take Cover strat, there’s still just as tough a nut to crack as ever.

Basilisk: are great for smoking high value infantry, and picking away at vehicles and monsters. With strats like Full Payload and the ability to shoot twice, they can really put the hurt down to any target on the board. I never leave home without one.

The Bad Touch is Still Bad

Despite the welcome changes to vehicles being able to shoot into combat, I still find my vehicles losing crucial turns of shooting or having to shoot what my opponent wants me to shoot by leaning into my vehicles. With no overwatch to deter charges (a change I like, for the record) it is all too easy to see your critical vehicles out of commission.

To exacerbate this, it is a lot harder to screen this edition. Sacrificial or just very fast units that can get deep into your backfield will often take vehicles out of play for key turns. I have found that I have to try and predict this and focus on eliminating or mitigating those units before they can do this but it is often easier said that done. You really want to keep an eye on these types of units to keep your big guns firing at maximum effect.

Plan to Assault in Waves

What I have learned is that in 9th in general and with Guard specifically, is that you have to stage your army to hit the objectives in waves both offensively and defensively. Using units intelligently to move quickly onto objectives to score and deny your opponent points. You can’t go all in early or risk losing too many key units for objective grabbing as well as suffering the dreaded bad touch across multiple units. Like a jaded Commandant of the Death Korps, you have to sacrifice your units at a steady pace to ensure victory through attrition! Keeping units safe in Chimeras, in reserves (Scions and Tallarn are great for this!) or hidden until it is there time to step into the line of fire is critical to success.

Guard haven’t really had the ability to stay off of the table for a while, outside of specific Tallarn builds and Scions. This is very valuable to avoid crippling alpha strikes, and to allow you to see how the game develops and take advantage of openings that pop up during the course of a battle.

It’s Not an Easy Road to Hoe

Playing Guard in 9th is certainly more challenging I have found, that it was in 8th for all of the reasons listed above. Screening is tough to do and the same units you want to screen with also want to be hurled at objectives leaving your damage dealing units quite vulnerable. A common tactic of dog piling on the enemy with buffed Catachans is tougher to pull off for the same reasons: those swarthy beefcakes also need to pull double duty on objectives.

However, like any good Guardsmen, never give up! I am sure with practice and perseverance we’ll find a path to glory in the name of the Emperor! I plan to experiment with some units like the Taurox, Vultures, and Vendettas to see if there’s some utility to be had there.

What tactics and tricks have been working for your proud Guardsmen? Let me know in the comments section!