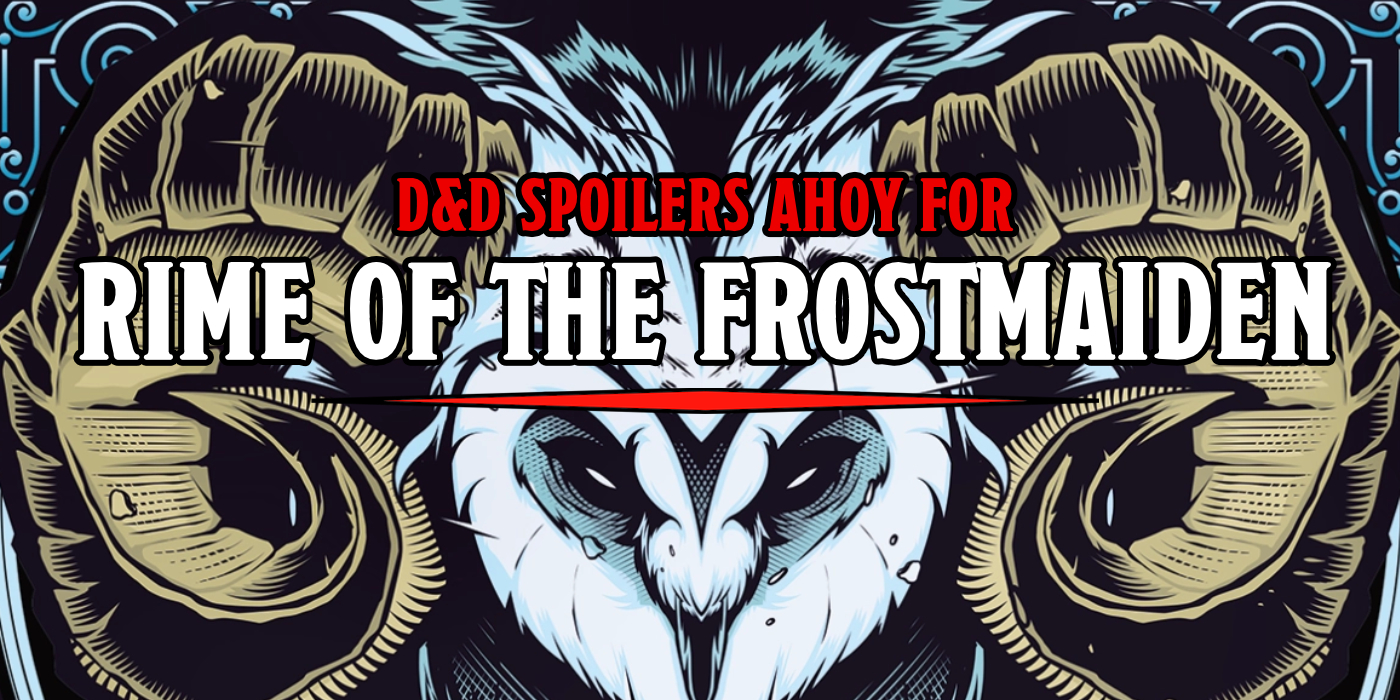 Want to know a little more about what’s in Icewind Dale: Rime of the Frostmaiden before it’s out? Check out this spoilerriffic preview. Winter is coming.

The latest Dungeons & Dragons adventure module wants you to go North to the land of the ice and snow, to the midnight sun where the hot springs flow. Taking place in Icewind Dale, the new adventure, Rime of the Frostmaiden is rife with secrets, isolation, and horror–but thanks to a surprisingly thorough preview on YouTube, many of those secrets have been spilled, revealing an adventure that revolves around far more than just the idea of “horror.” We’re going to be going through it, but there are some fairly significant spoilers laying in wait, so if you’re hoping to play through the adventure fresh, be ye warned.

Alright, let’s dive into the preview, which comes to the internet via The Gaming Gang and takes us through the entire adventure. While we’re not going to spoil the entire adventure, we are going to look at the themes and a few noteworthy secrets that have been spoiled so far. So get ready, grab your Winter Cloak or Ring of Warmth and let’s head for Icewind Dale. 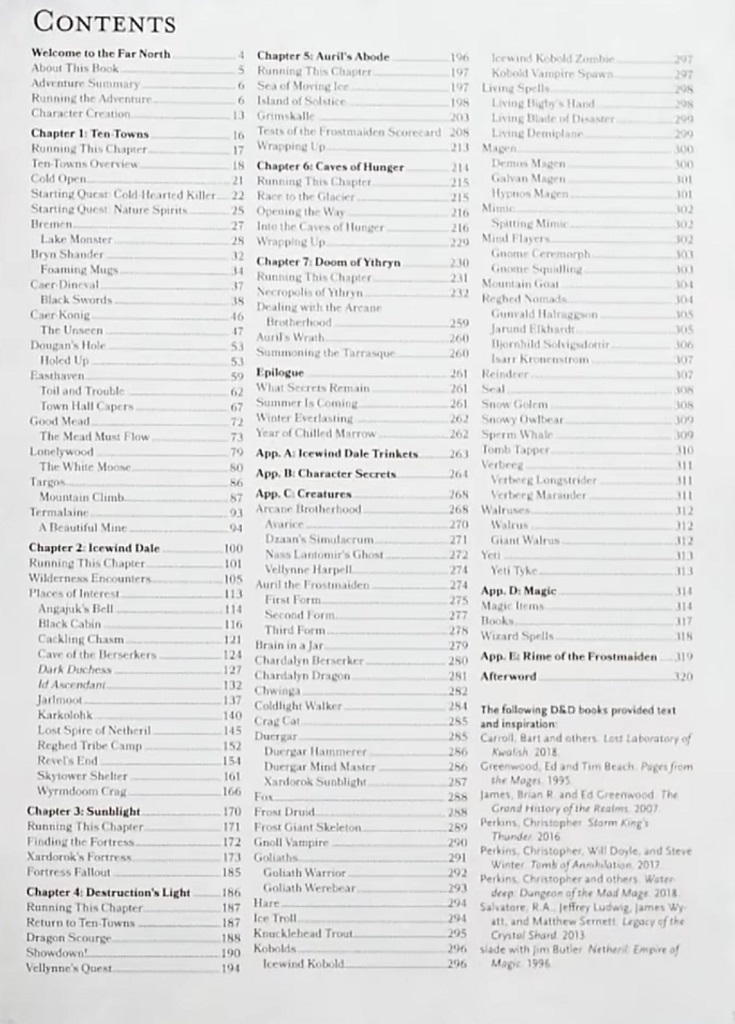 First up we have the table of contents. As you can see the whole adventure is in seven different chapters, each one revolves around a different location–though it’s worth pointing out that like Tomb of Annihilation, there’s a sort of funnel/tipping point where the pace picks up a great deal–though unlike in ToA it seems like you’ll have a more open path once you hit the end game. Exploration is a recurring theme that hasn’t been hyped up too far, but as you’ll see there are plenty of opportunities to engage with that third, beleaguered pillar. Here’s a sense of how the adventure flows: 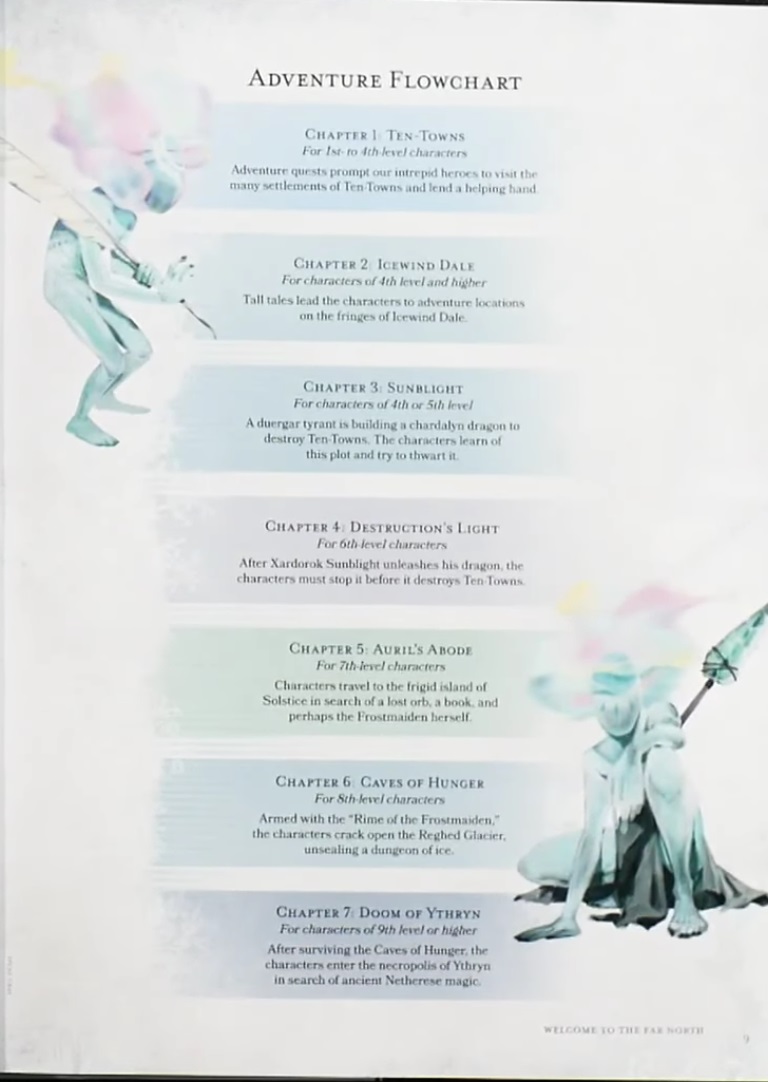 What’s most surprising here is that you fight a god well before the end of the adventure. You face down Auril when you’re in Chapter 5 and only around 7th level. Now, there’s some narrative reasons why this is more possible (and I rather enjoy their approach to fighting gods, which we’ll get to later), but even so, battling Auril isn’t the grand finale. The other thing to note is that a lot of the adventure revolves around Ten-Towns. And as you can see, there’s a lot of character to it: 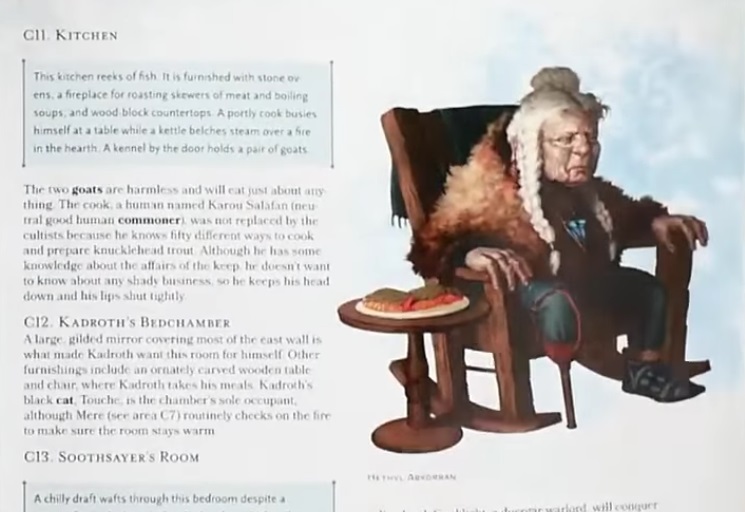 One of the main things we’ve seen previewed is that there are different starting quests that reflect the path you might take. Each of these starting quests gets a full treatment in the book though, including art for every path in the game. 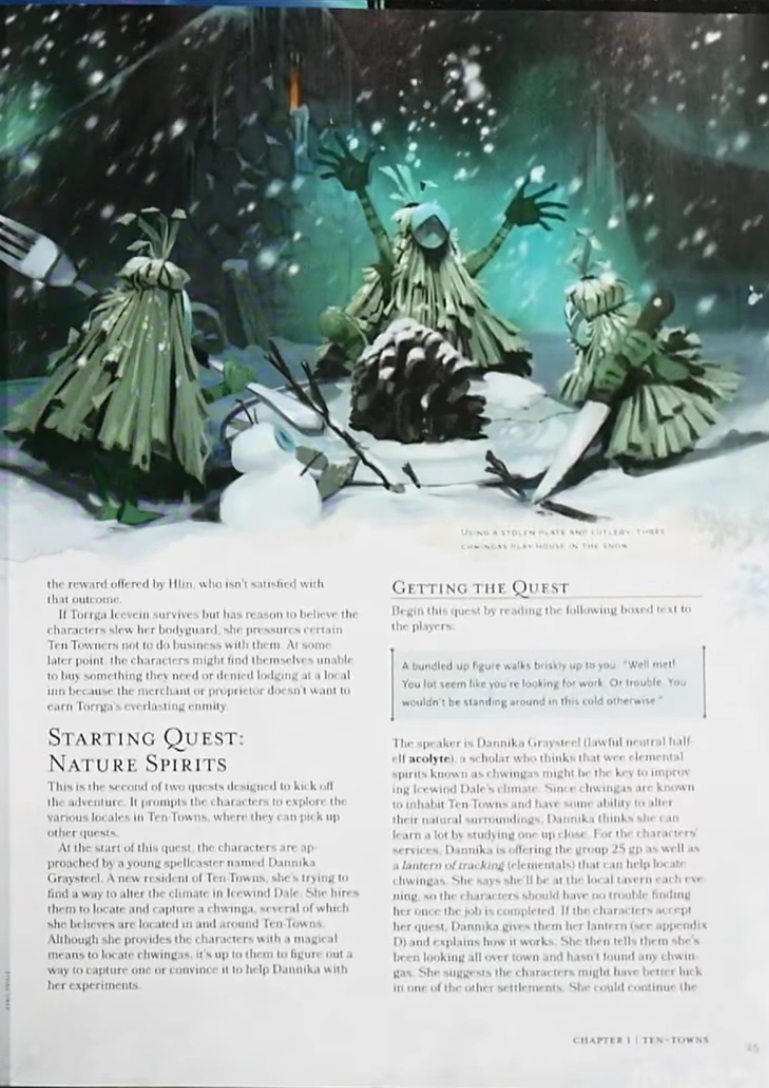 It’s curious to see WotC experimenting with replayability–that seems to be one of the methods people tackle these modules. It’s not uncommon to read about people playing through something like Curse of Strahd more than once, and Waterdeep: Dragon Heist was designed with playing through more than once in mind. 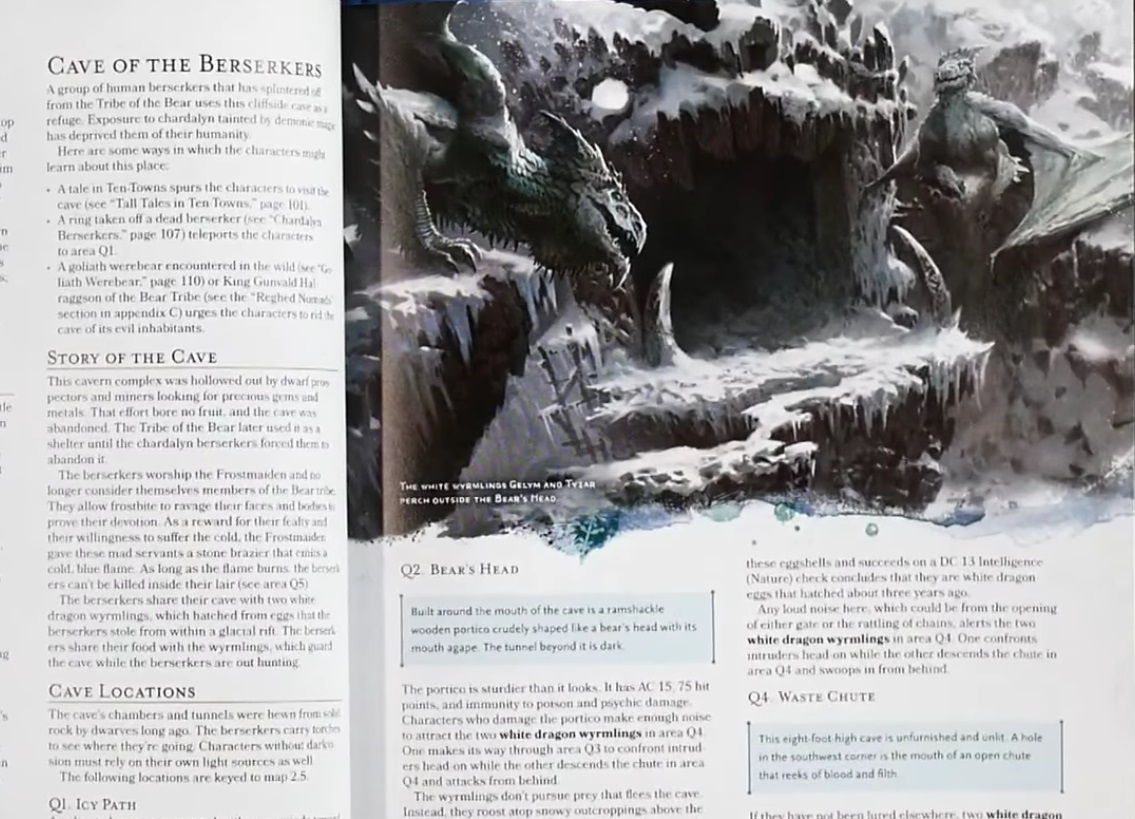 The other thing here is that the locations feel much more fantastic–and deliberate. From what you can see in the book, each of these locations has a story accompanying it that relates it not just to the adventure, but to the wider world. And you’ll explore a variety of locations including a Goblin fort: 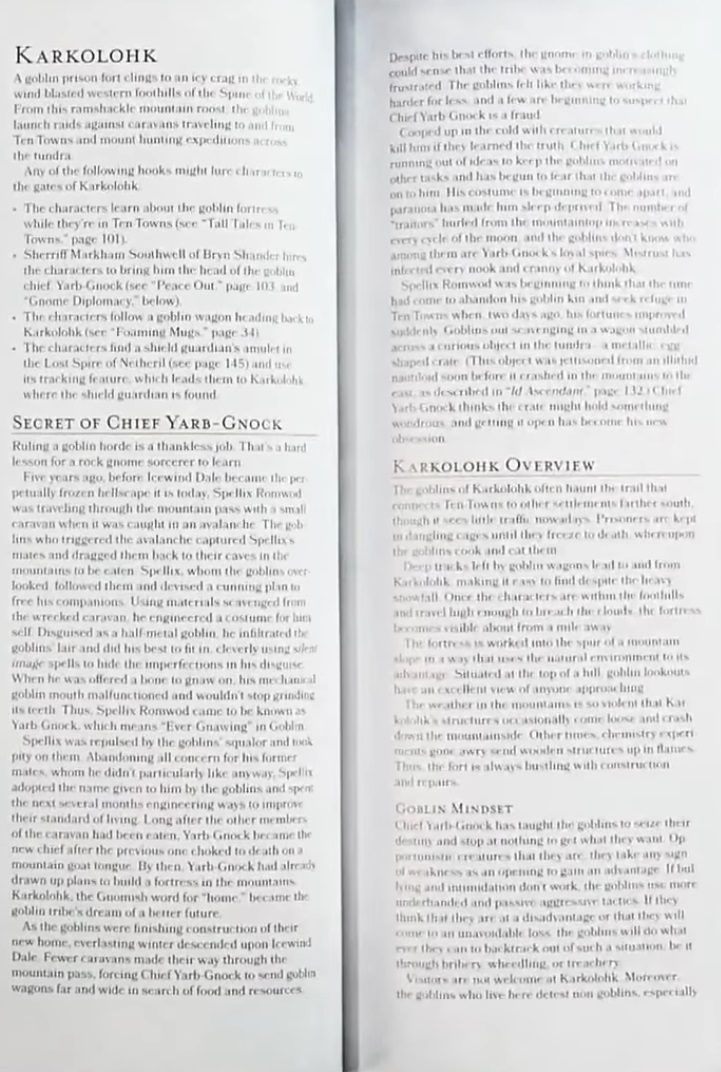 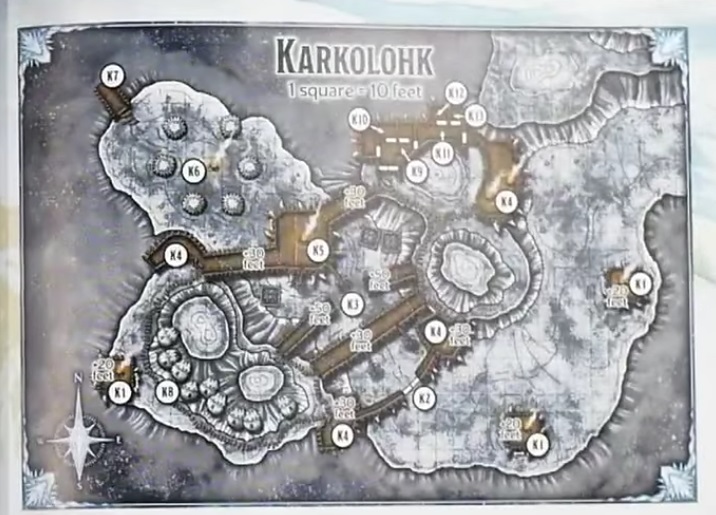 And of course the Frostmaiden’s wintry headquarters, which is on a vast snowflake island. 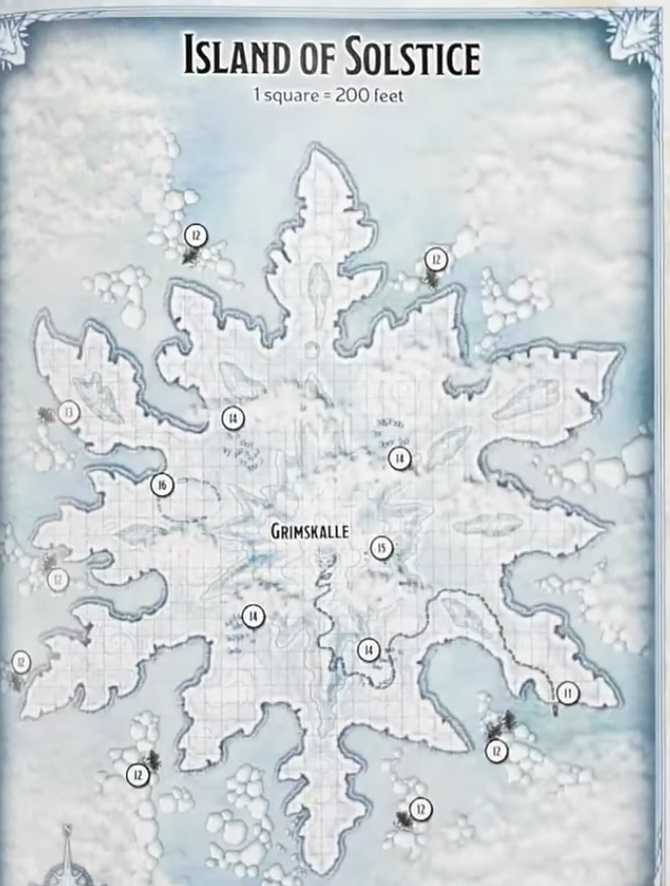 Auril might be manythings, but subtle, she is not. The adventure looks like it’s full of more setpiece moments than other adventures, here’s a preview of a big dragon attack. A return to one of those iconic moments, though this time it’s a construct, and it seems that players are expected to do more than just endure a bunch of damage–a far cry from the dragon attack in Tyranny of Dragons, which is one of the weaker moments in a D&D adventure. 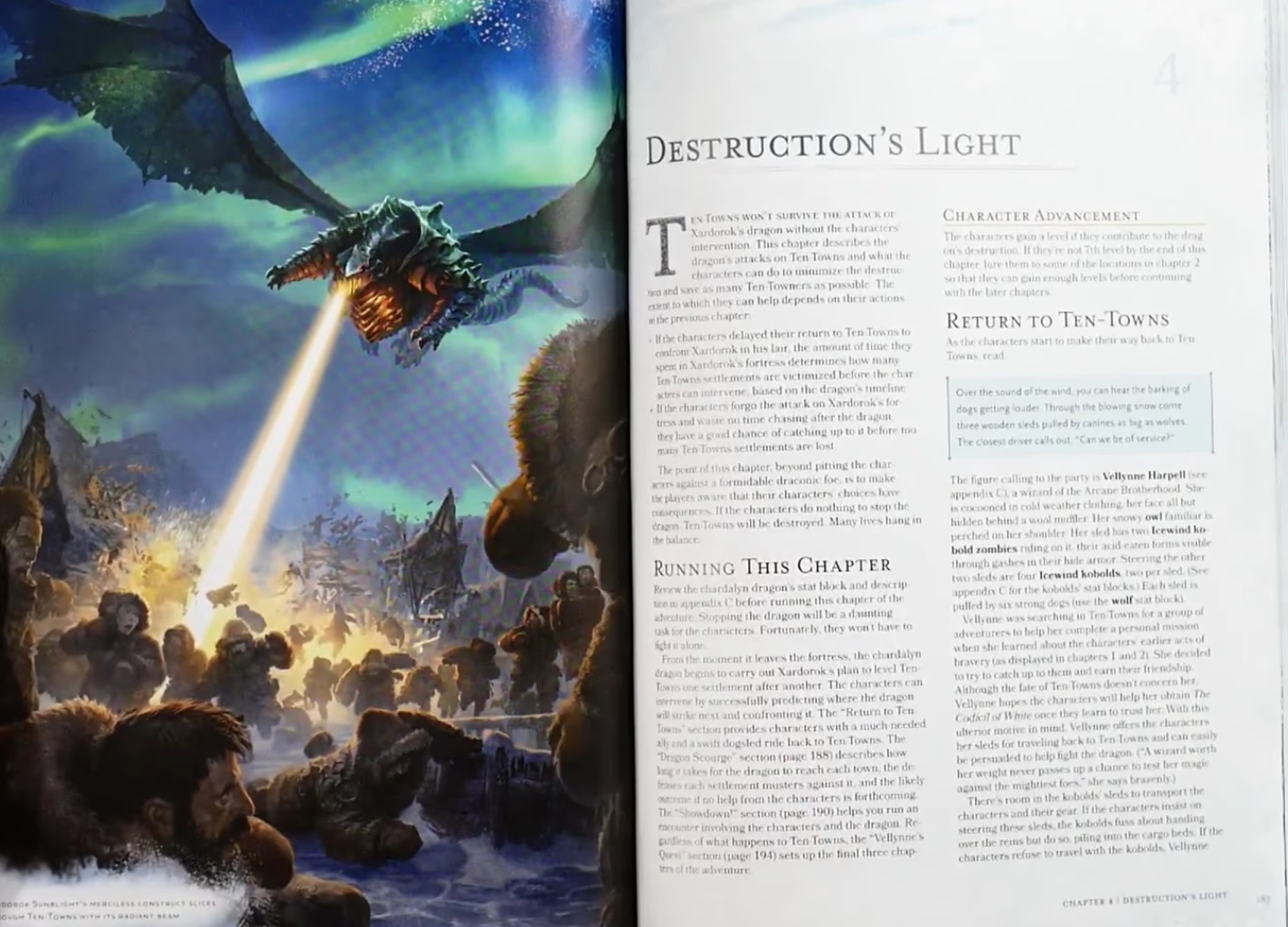 Here you’ll find more to do than just fight the dragon. You can fight villagers, thwart other things happening during the attack, follow it, lay an ambush for it. As mentioned, the Dragon here is a construct, powered by magic. Netherese magic and a general shift towards dealing with magical BS dominates the second part of the adventure. 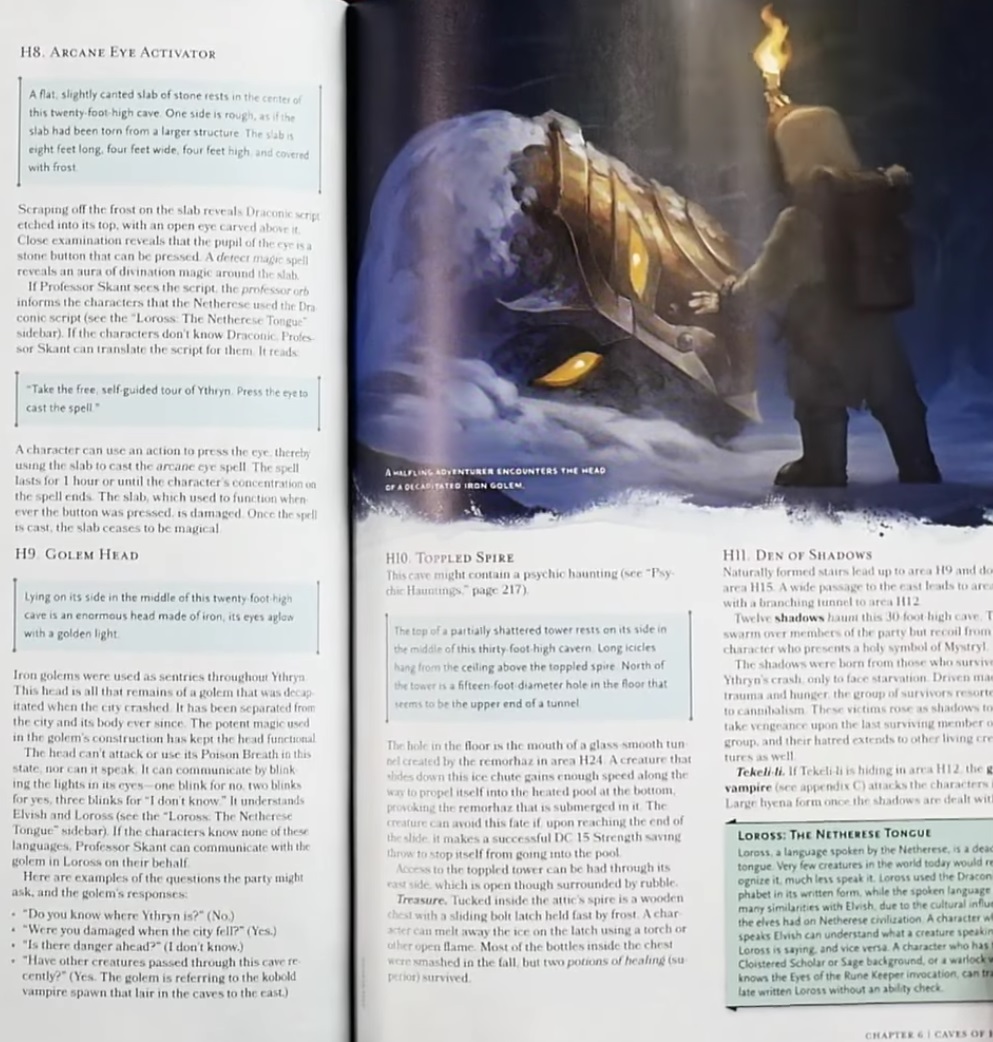 There’s definitely a bigger power level with more magitech devices. You’ll be interacting with a lot of Netheril’s remnants as you explore a crashed city and beyond… 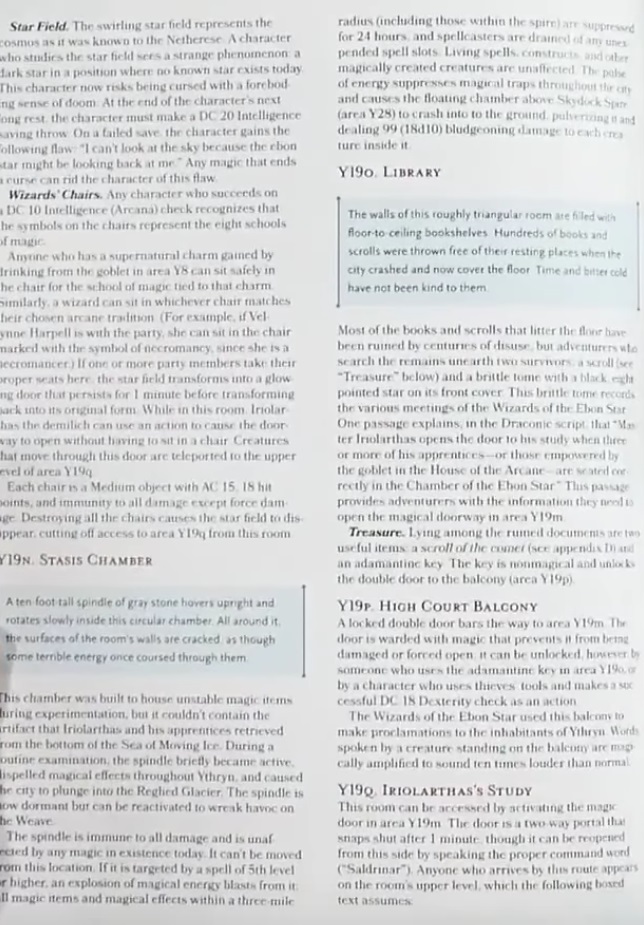 You might even find a familiar reference lurking in wait for you: 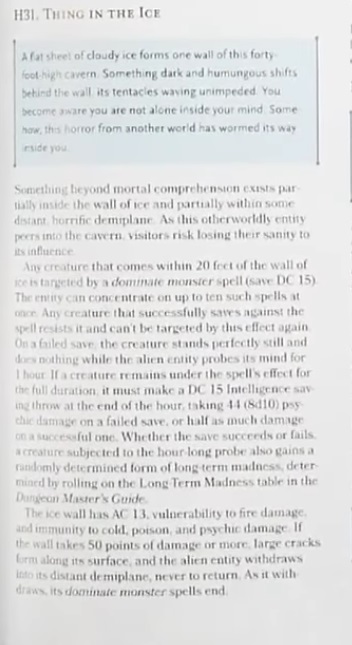 Now where have we seen an “alien Thing” before? You’ll find new monsters and items that reflect the advanced magical weirdness theme in the book as well, including gnome mindflayers: 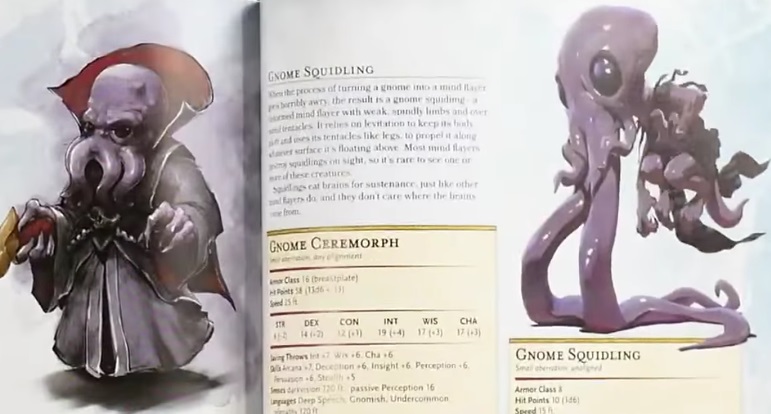 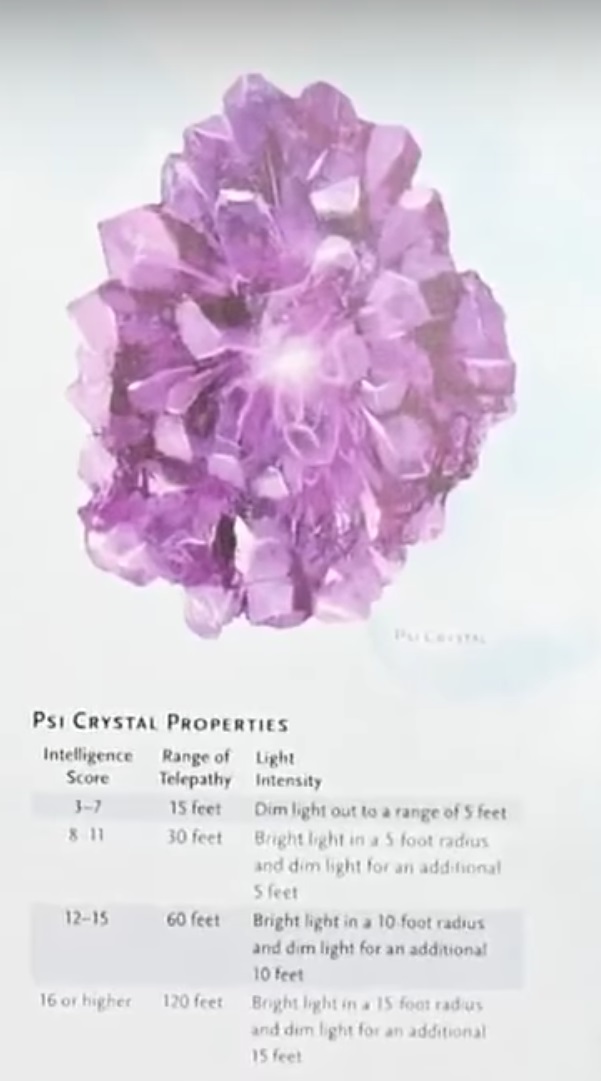 And more. We’ll get to that later though. For now let’s leave off with a look at just a small taste of the secrets a player character might be harboring in the adventure: 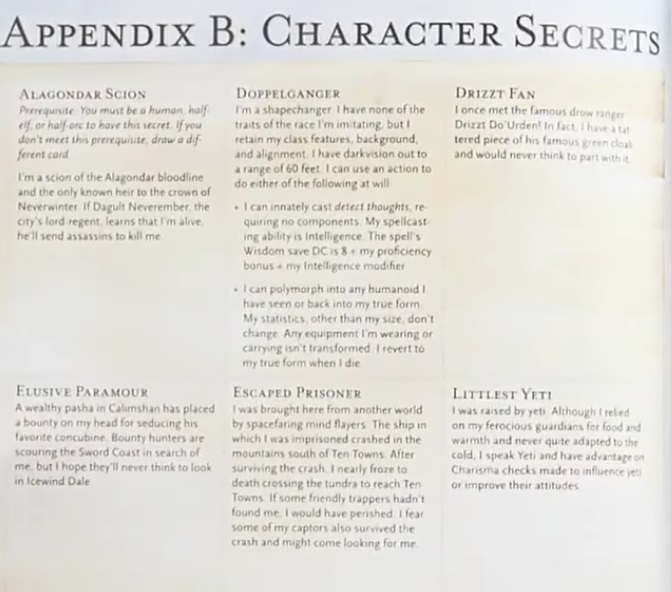 Rime of the Frostmaiden comes out in about a week. Get ready!

D&D: Into the Mist - Curse of Strahd Episode 7 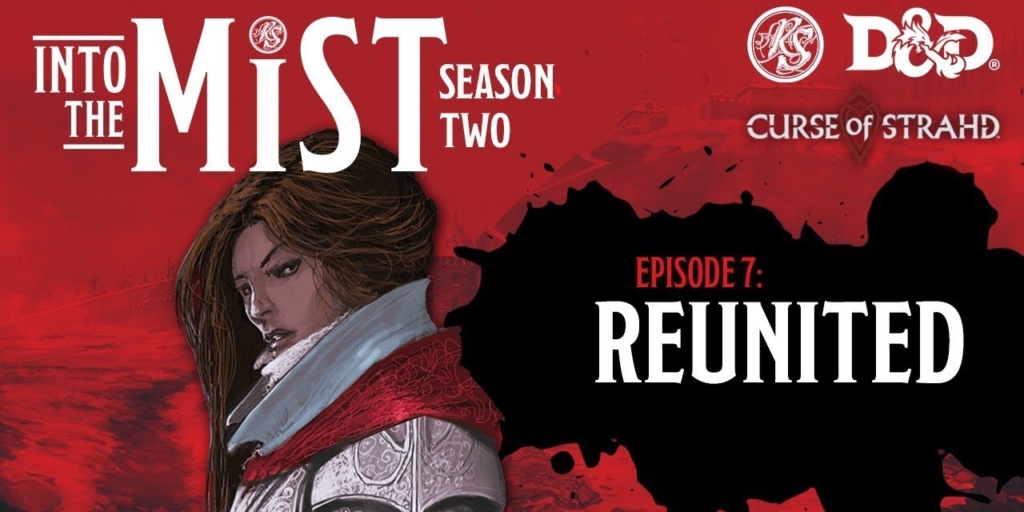