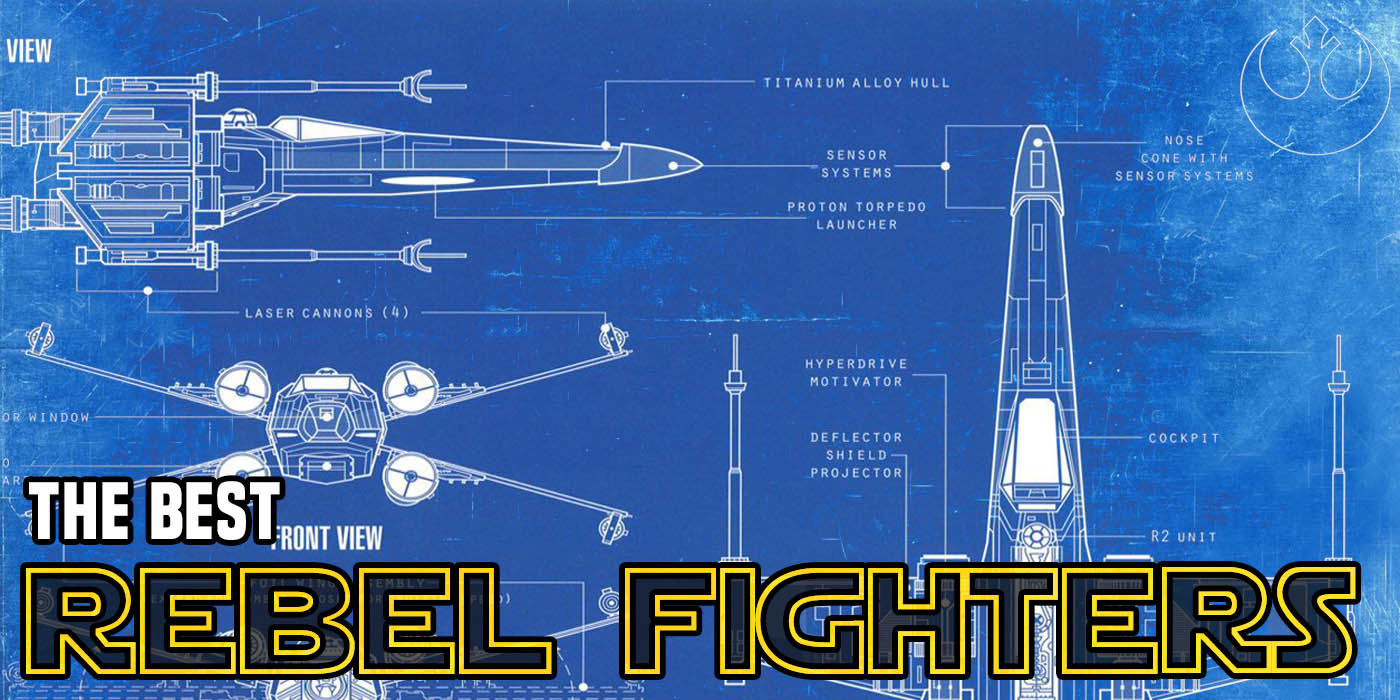 Let’s take a look at the best fighters flown by the Rebel Alliance.

Starfighters, or snubfighters, are a huge part of Star Wars. Many of their models are iconic parts of Star Wars lore, and a huge part of the moives, shows, comics, books, and games revolve about fighters and fighter combat. The other week we took a look at the best TIE fighters, the back bone of the Imperial fighter corp and some of the most iconic bad guy ships in sci-fi history. Today lets take a look at the best of the ships flown by their opponents, the brave freedom fighters (or vile terrorists) of the Rebel Alliance.

N.B. today we are only looking at canon ships, and only ships flown by the Rebels, not New Republic Ships.

A few weeks ago the B-wing made it on to my list of weirdest ships. Because of that some people got the impression that I don’t like the ship. The truth however is that I adore the B-wing. Yes it’s super weird, but that’s part of what makes it great. It’s a ship that stands out, and the blows stuff up. This heavily armed bomber has made it’s mark on Star Wars history as a deadly but temperamental ship It’s got a massive weapon load out, with autoblasters, ion cannons, blaster cannons, and bombs and torpedoes. I just love a heavy ship that can take a pounding and still cripple a capital ship.

The ARC-170 is best known for its use by the Republic during the Clone Wars. This venerable fighter however got a second lease on life as a fighter used by the Rebel Alliance. During the Galactic Civil War a number of famous Rebel pilots flew ARC-170s, including Shara Bey, Poe Dameron’s mother. The fighter/bomber is a heavily armed and armored ship, with a pair of forward facing medium laser cannons, two lighter aft facings cannons and proton torpedo launchers. This made it one of more heavily armored fighters of the Clone Wars, though by the time of the Rebellion this was no longer true. What I really love about the ARC is the look of it. It manages to be a very “Star Wars” fighter, with elements of the X-wing obvious, while still being unique and evoking the cleaner lines of the Republic Era. It’s also one of those rare multi-crew fighters, invoking WWII two person fighter/bomers, complete with a rear gunner.

The U-wing straddles the line between a starfighter and a light transport. As a combat craft it’s not all that deadly, with only a pair of laser cannons. It’s not the fastest or most maneuverable ship either, though it is though and like most Rebel fighters it has shields, life support and a hyperdrive. It’s main draw is the transport bay, which allows it to carry up to 8 passengers or a good amount of supplies. Due to this the ship was well suited for rapid insertion missions, and could be equipped with door gunners to act as a fire support gun boat. This ship is the Rebel’s version of a helicopter. Because of that the uses for this ship are just super cool. It makes an amazing ship for any team to use as a transport/base and is great for use in RPGs as the players home ship. It also just looks super cool, with a combination of bulkiness and grace when its s-foils are extended.

The A-wing screams SPEED with every line.  This is a ship whose design perfectly matches its’ use. You take one look at it and you know its fast, deadly, and meant to hunt other fighters. The A-wing acts as the primary interceptor of Rebel’s, in essence the direct counterpart to the Imperial TIE Interceptor. With a pair of laser cannons and two concussion missile launchers its not the heaviest armed ship around, but still packs a punch and can even threaten capital ships. Its, fast, killy and beautiful, what more could you want?

The X-wing is the ship of dreams and arguibley the most iconic space ship in sci-fi history. This isn’t just another starfighter, its THE starfighter. It’s a perfect blend of speed, toughness and fire power. With four laser cannons and a pair of proton torpedo launchers the X-wing can take on any target, from other fighters to Imperial Star Destroyers. It’s got cool lines, and just enough asymmetry to look great. The ship also comes with sweet folding wing action and a slot for a loyal astromech companion. While there have been many variations of the X-wing, none beat the classic, orginal, T-65B, its the vehicle of many a young fan’s day dreams and will also hold the #1 spot in my jaded heart.

Let us know what your favorite Rebel fighter is (and how mad you are that the Y-wing wasn’t on this list) down in the comments!