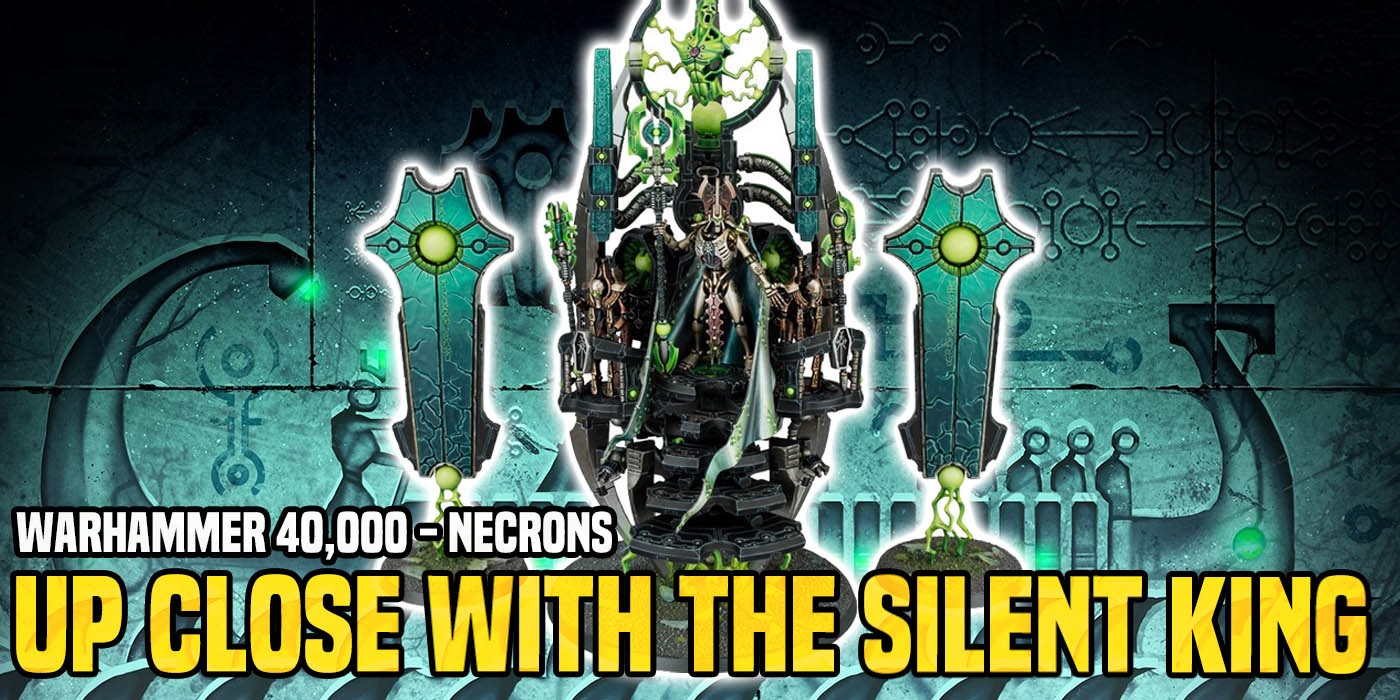 Games Workshop has released more pictures of the Silent King model and it’s very impressive. Who else would wear a liquid necrodermis cloak?!

If you were looking for some fantastic new eye-candy shots of the upcoming Silent King model the Games Workshop has put this one together for you. Try not to go into diabetic shock cause this model looks SWEET! 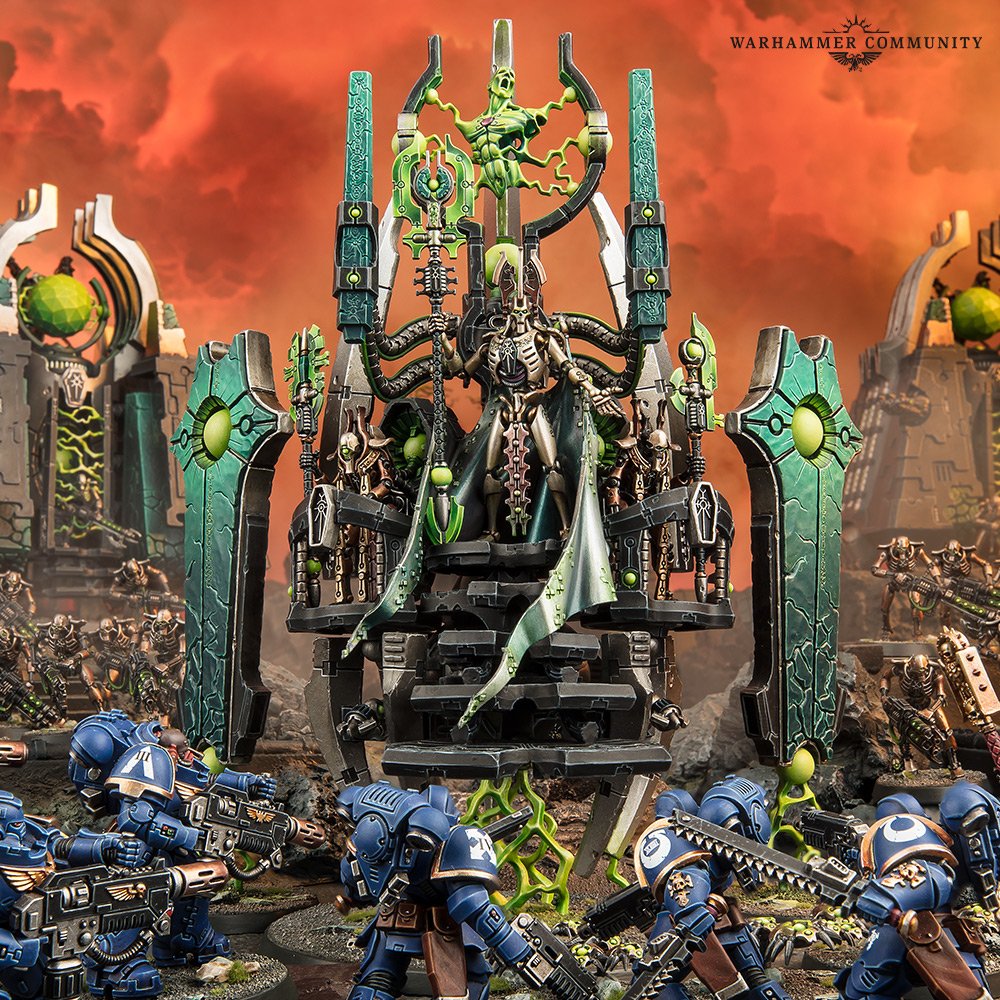 Games Workshop also brought in a trio of designers and artists who worked on the model and we’ll be peppering in quotes from them as well. But for now, enjoy this new model showcase.

Steve Buddle, lead designer on the Necrons: “I wanted to push the image in a way that expressed the personality and status of Szarekh – that of an insane megalomaniac with aspirations of godhood. With that in mind, the platform became more of a throne room, adding the Triarch characters, enslaved to the throne and emphasising that Szarekh is utterly in charge.” 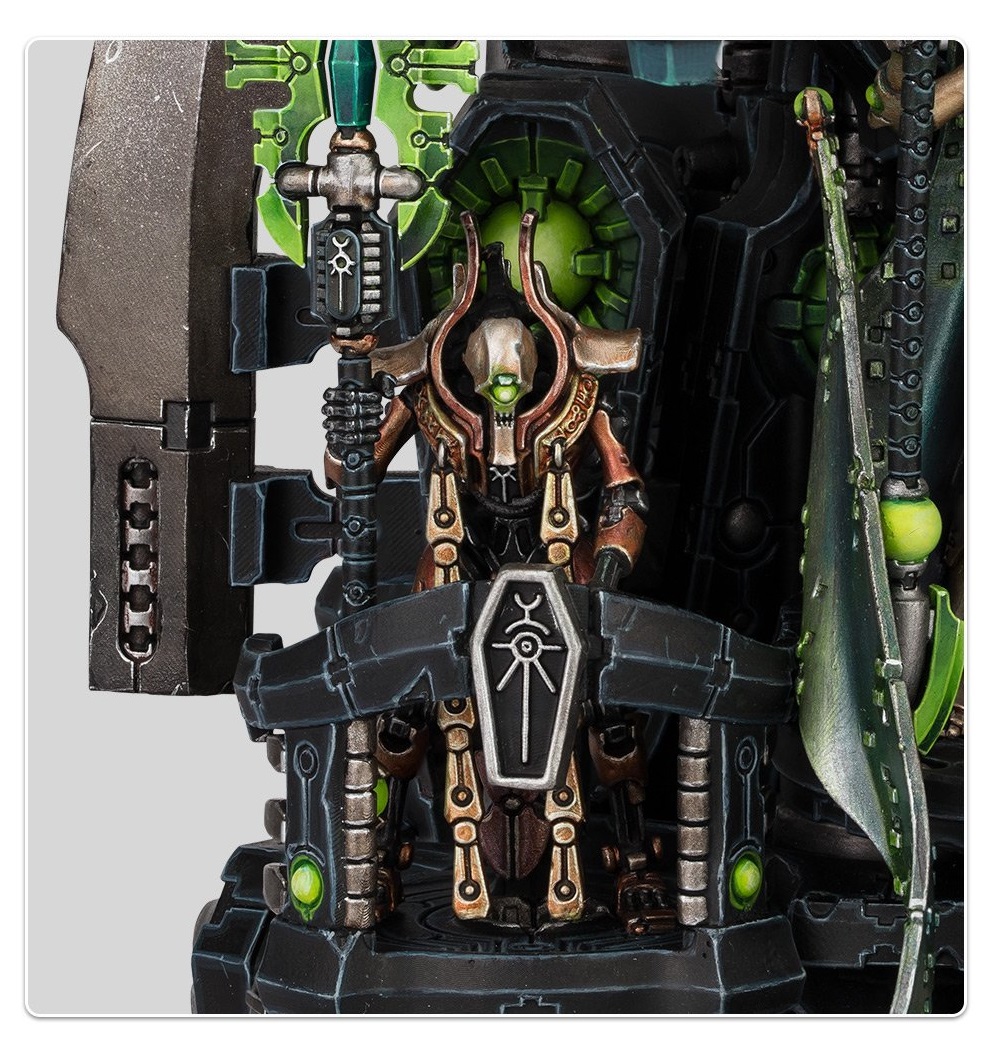 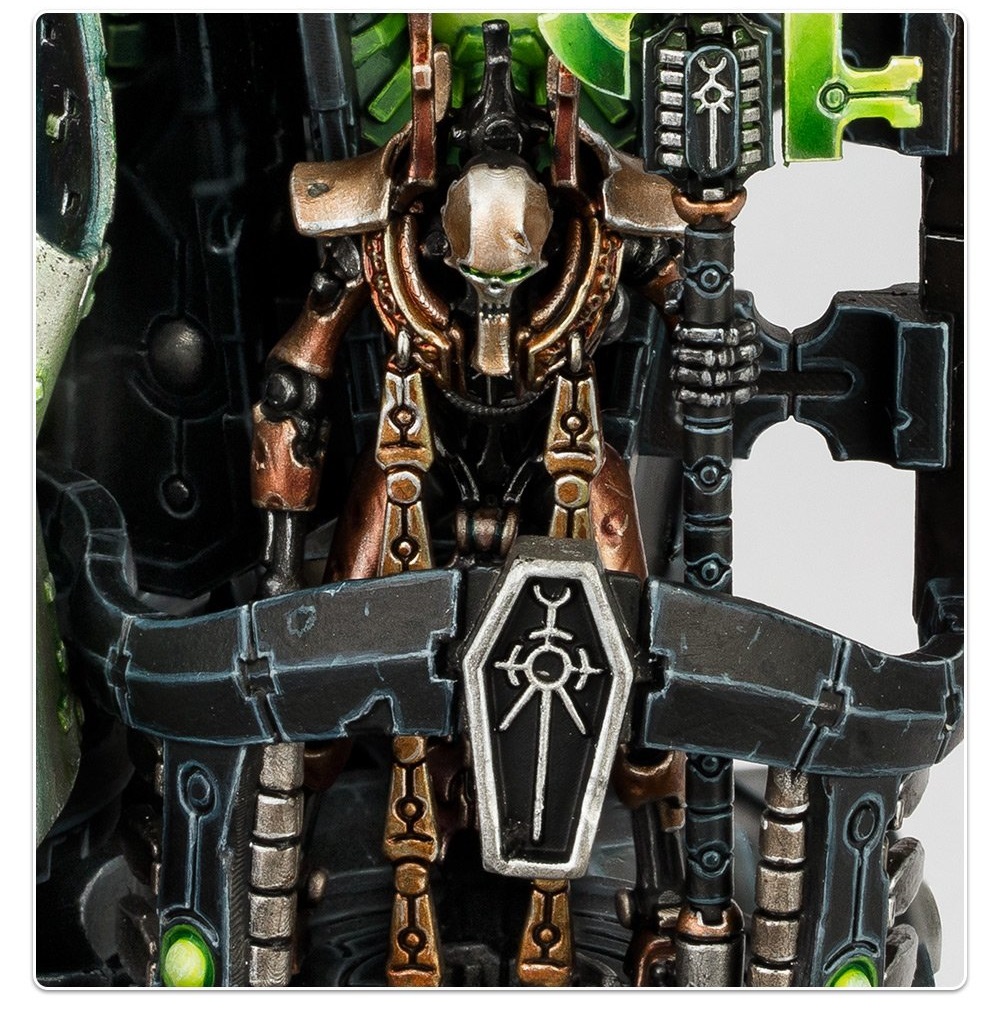 Steve: “Making the trapped C’tan a feature that Szarekh is displaying prominently to everyone pushes the idea of his staggering hubris. It’s a statement that, yes, he can control even the star gods and reduce them to a power source for his own ends.” 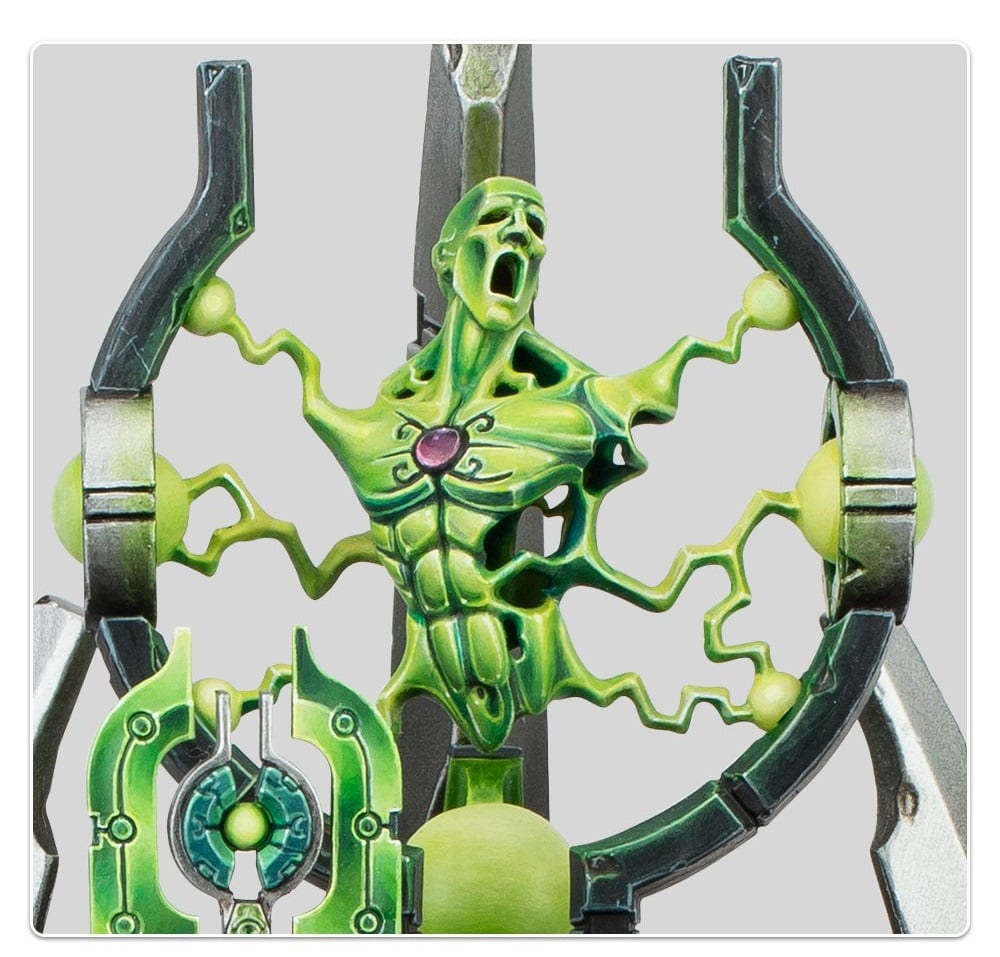 Ed Cottrell, model designer: “I designed the entire throne room around this idea, and although it’s an insane xenos contraption built using unimaginable Necron science, Szarekh himself remains the focal point at its centre. The two menhirs serve to add even more presence and power to the model. When placed on either side of the throne room, they form a pyramid-like silhouette, reminiscent of a Monolith.” 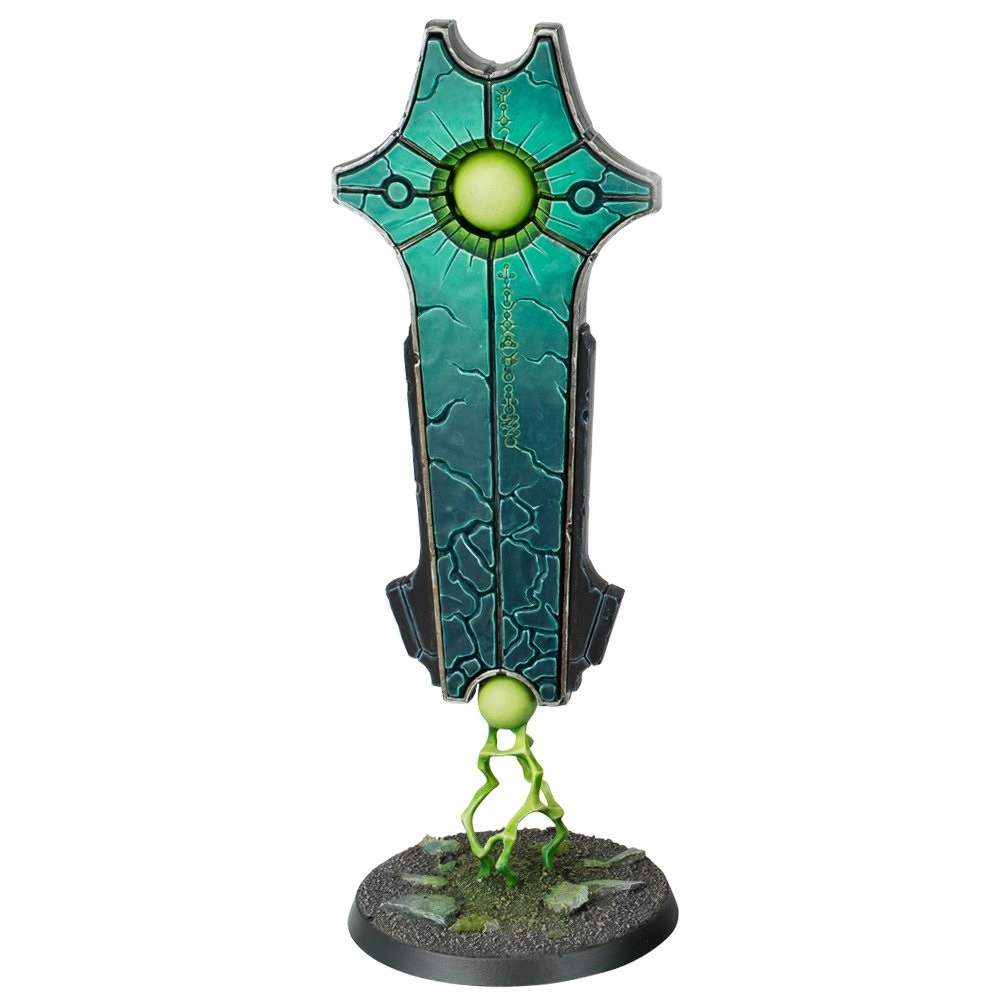 Max Faleij, ‘Eavy Metal Team painter: “I had the idea early on to make the blackstone elements radiate with a ghostly teal glow as if it was reacting to the Necron energy pulsing through it. I think this ties directly into the mysterious and unknown properties of the material itself and speaks to the Necrons’ profound understanding of how it works. It also gives us this great colour that sits harmoniously together with the green energy and contrasts nicely against the copper armour.” 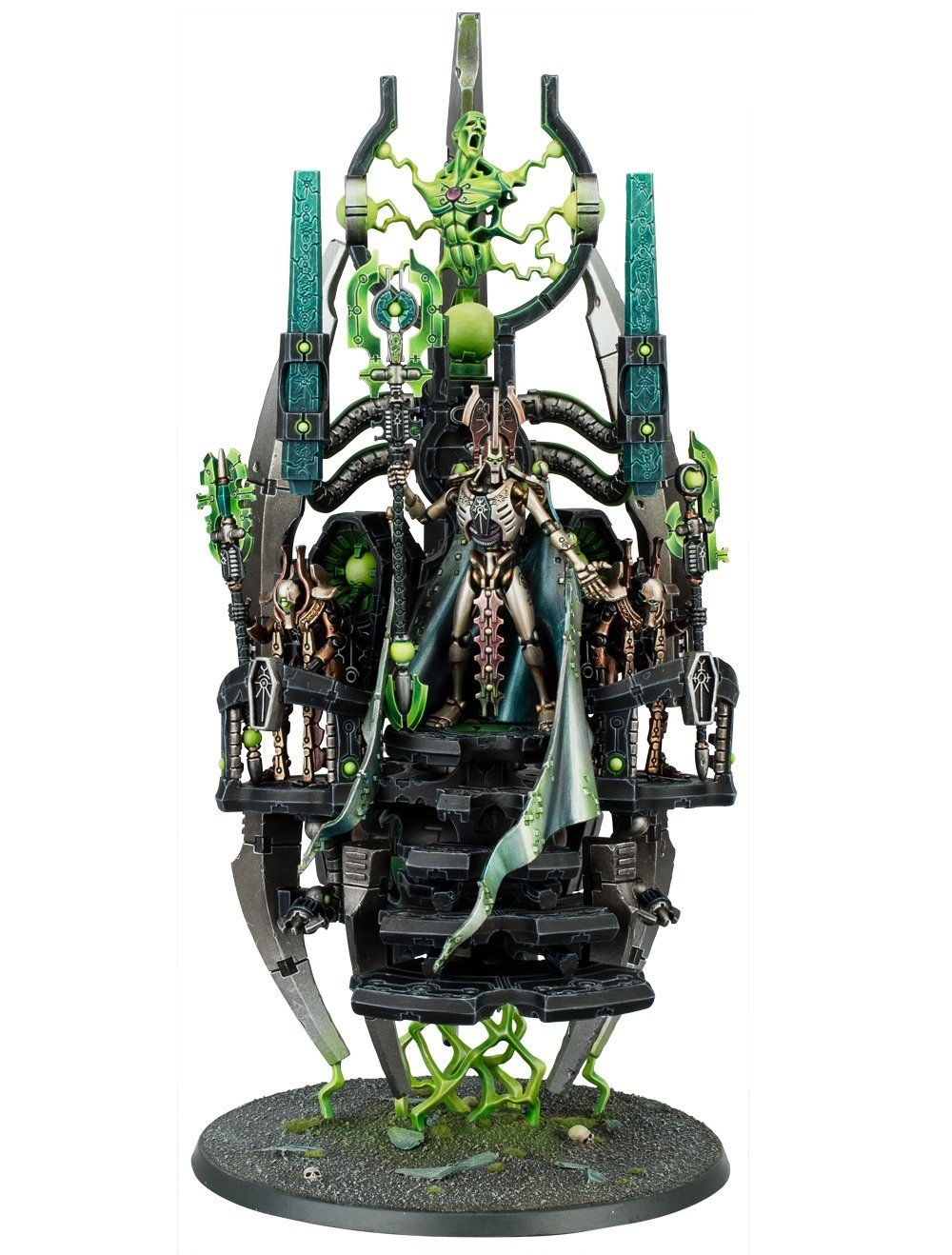 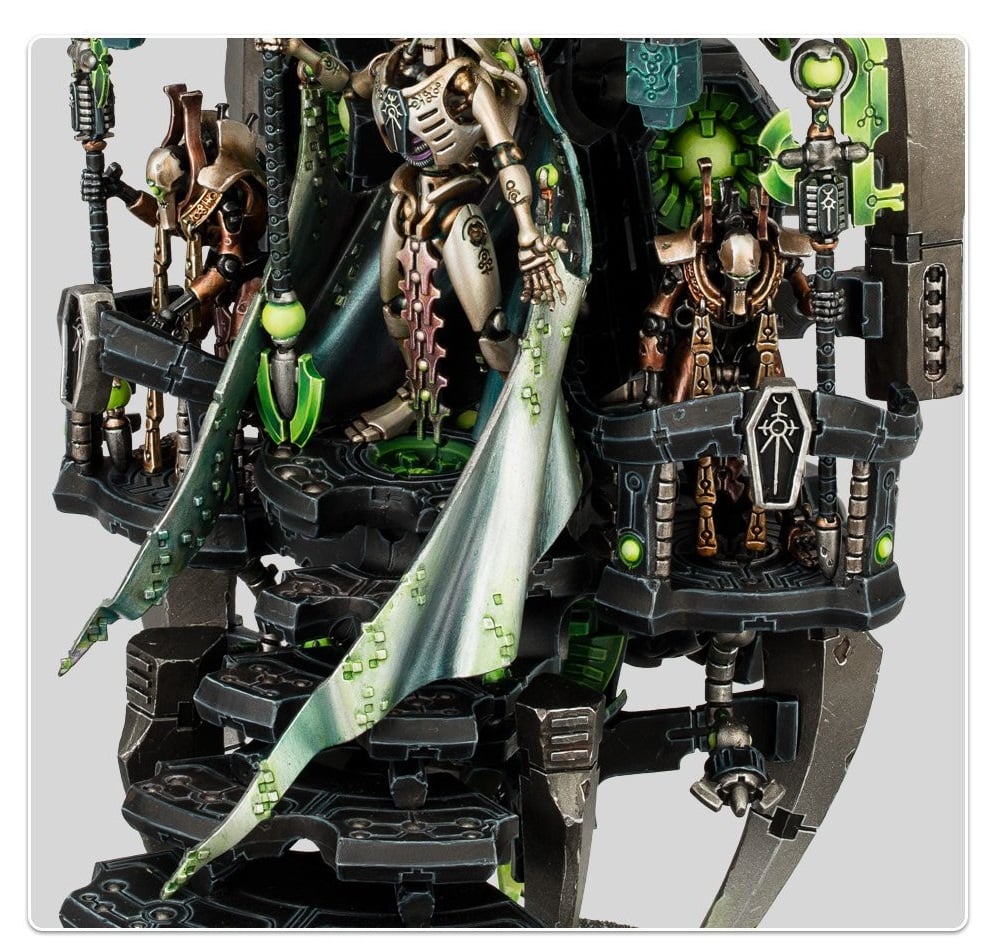 Overall, I think the design team and painted knocked this one out of the park! I can’t wait to see what the community does with this model once they get their hands on it. It’s going to be one heck of a painting challenge for sure. There is just a TON of details on this model and you could spend hours on this model quite easily. It’s a really great concept and they executed the idea beautifully. There’s a lot of subtle things on the model – like the more pearlescent tone of the Silent King compared to the more weathered looking Phaerons to his sides. Between all the details and line-work and different textures, this is an amazing kit and I can’t wait to see it in person! 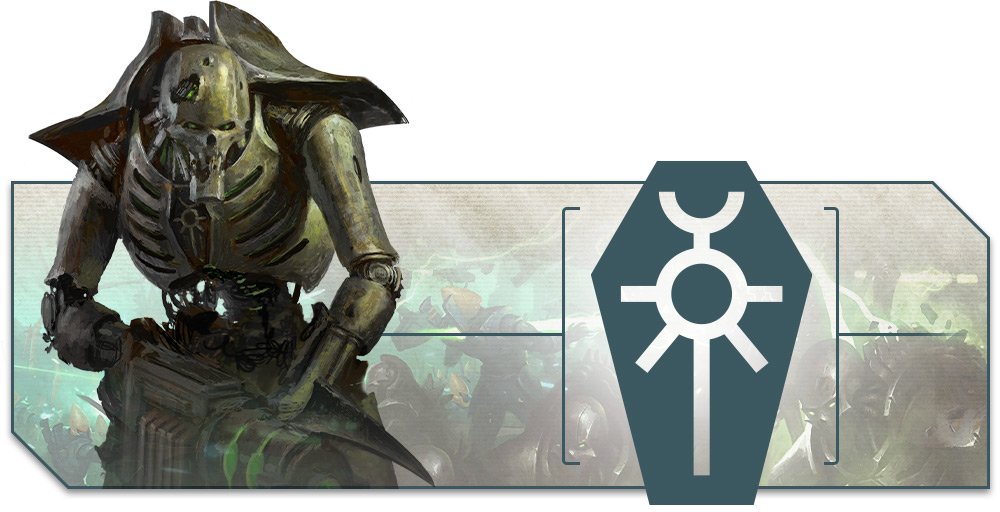 What do you think of the Silent King and this amazing new model?

Author: Adam Harrison
Writer, Editor, Texas Native, and Austinite for 15+ years, Adam covers all things Tabletop Gaming. Which includes Warhammer 40,000, Age of Sigmar, D&D, Board Games and everything else that involves dice, boards, cards and a table. A hobbyist, player, and collector of miniatures and games, Adam's current obsession are his Death Armies for Age of Sigmar, his Blood Angels and Tyranids for 40k, and his ever growing Arkham Horror: The Card Game Collection.
Advertisement
Games Workshop Miniatures Necrons Warhammer 40k Warhammer 40K 9th Edition
Advertisement 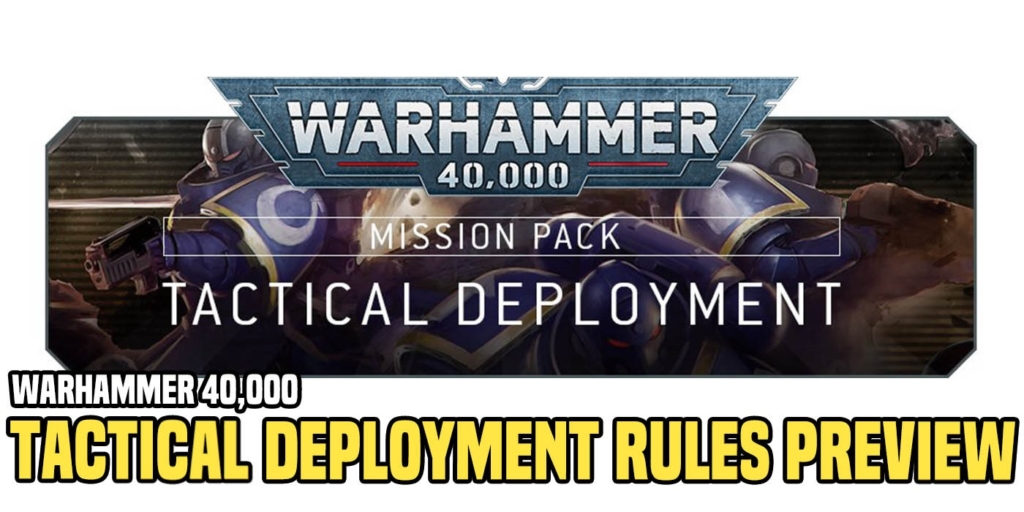