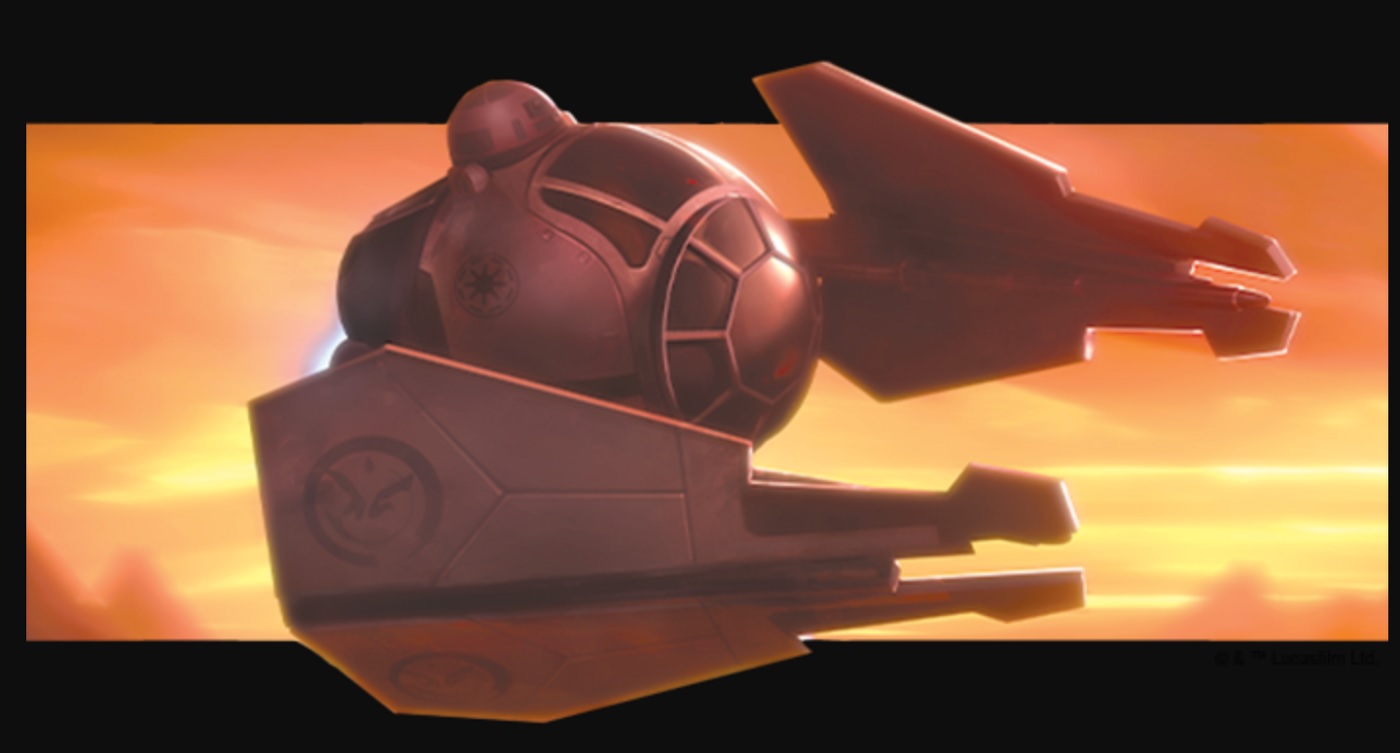 Is it a TIE? Is it an A-Wing? It’s neither – it’s the Eta-2 Actis and we’re taking a look at the new Star Fighter today!

We’ve got another look at a new X-Wing ship coming to a space dock near you. This Galactic Republic fighter boasts some amazing manuevablity and some Jedi-mind tricks of its own. It’s time to take a deep dive into the Eta-2 Actis Interceptor!

“Like the Delta-7 Aethersprite before it, the Eta-2 provides extra performance to those who use the Force and this expansion gives you even more ways for you to use your Jedi’s Force charges to gain an advantage. Not only do the ship’s Intuitive Controls give pilots a chance to reposition with a purple boost or purple barrel roll during the System Phase, the Eta-2 also introduce’s a new type of maneuver that can only be executed by Force users. These purple maneuvers require the pilot to spend a Force charge, but allow Eta-2 pilots to pull off a tight speed-2 Tallon Roll in the thick of combat.” 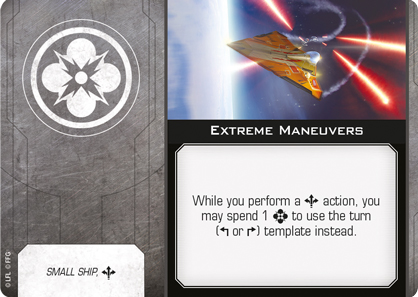 Let’s kick things off with the most “generic” one out there just to get a sense of what this ship can do: 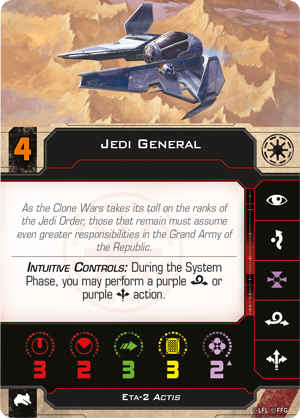 Our unnamed Jedi General is indeed the “basic” ship. For starters this ship has increased firepower in it’s bullseye arc with 3 damage dice or two if you’re in the front arc. It’s a nimble agility 3 but has no shields and only 3 hull. However, depending on the pilot, it might have more force die to spend during your turn for some of those extreme maneuvers. This ship’s best defense is just not getting shot. 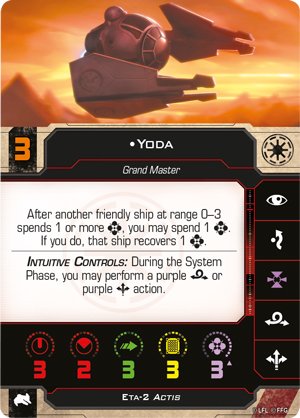 Clocking in at Initiative 3 is none other than Yoda! The Grand Master of the Jedi will allow you to toss out Force tokens to other force users in range. I’ll be honest, I wasn’t sure what to think about Yoda being a pilot but, eh? Sure! 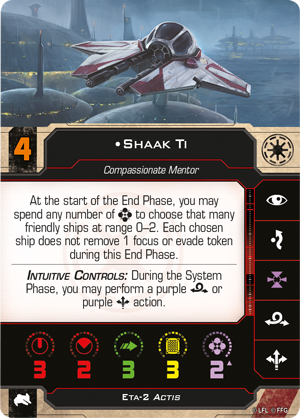 Shaak Ti allows you to spend your Force charges to allow your other ships to keep their focus or evade tokens. Not a bad trade off and a good support ship. 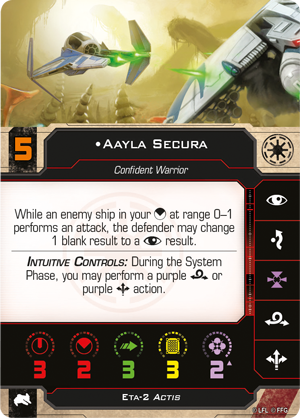 Aayla Secura messes with those pesky blank results an allows for you to convert them to focus dice – and hopefully you can then convert those into dodges. 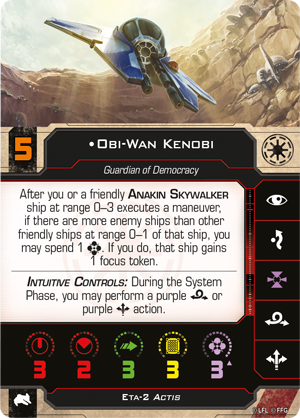 Obi-Wan Kenobi is in the house with a special ability of his own. He’s a great wingman for Anakin Skywalker and allows for you to generate some focus. 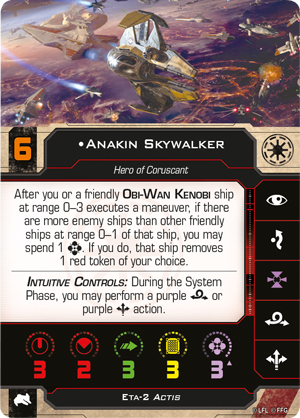 And we can’t have a new Jedi Starfighter without the golden boy himself, Anakin Skywalker. The former pod-racer also combos well with Obi-Wan Kenobi as he allows you to spend force tokens to remove red tokens. They make quite a pair! 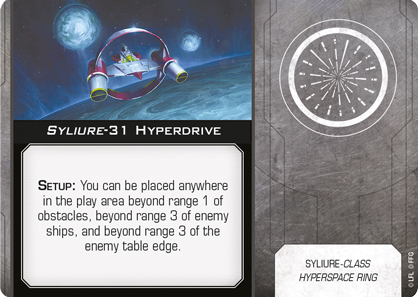 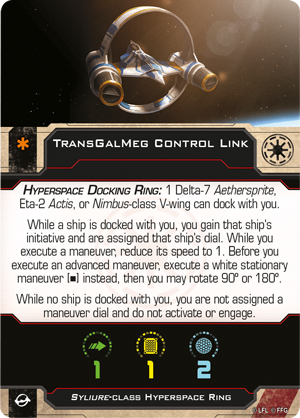 Much like the Aethersprite or the Nimbus, this ship also has access to the Syliure-Class Hyperspace Ring. This provides it with some extra options (and shields) while a ship is docked with it. You also get some extra setup options as well. 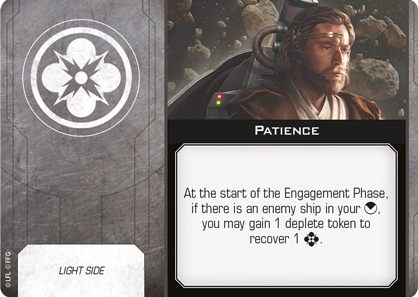 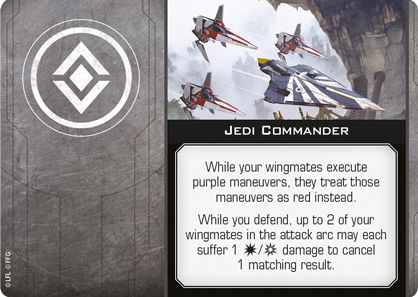 We also get some cards we’ve seen before with Patience and Jedi Commander. These aren’t exactly new, but they are nice additions to this particular ship.

Overall, it’s a VERY nimble ship and it’s packing some interesting support options. If you can take advantage of it’s speed and avoid getting hit while lining-up shots of your own and supporting your allies, you’re sure to win* one for the Republic! (Then again if you can do that with pretty much any ship you’re probably doing pretty well already.) 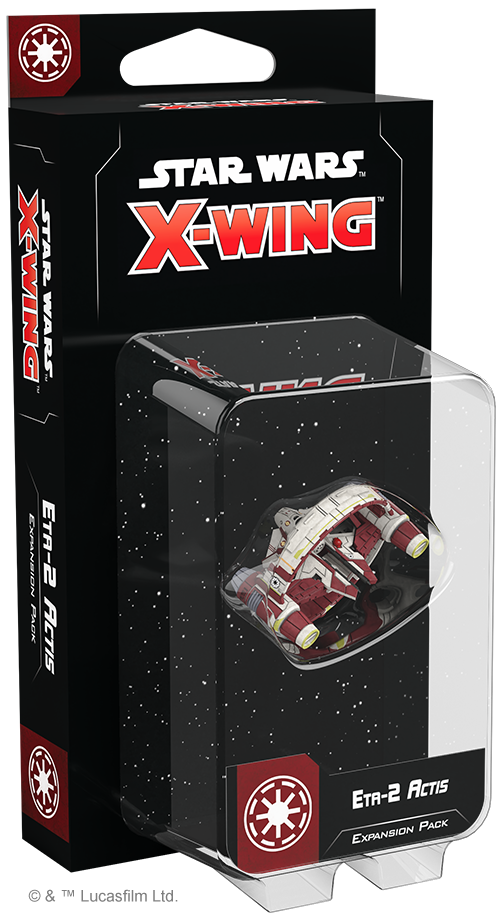 As the Clone Wars takes its toll on the ranks of the Jedi Order, those that remain must assume even greater responsibilities in the Grand Army of the Republic. The Eta-2 Actis-class Interceptor, developed by Kuat Systems Engineering, is stripped down so that battle hardened Jedi pilots can get the most out of its agile frame.

This expansion puts one of these agile ships as well as a Syliure-class Hyperspace Ring in your hands. Meanwhile, six ship cards offer an array of the galaxy’s most notable Jedi Knights to fly it into battle and six upgrade cards invite you to customize the ship with a new astromech, additional Force abilities, and more! 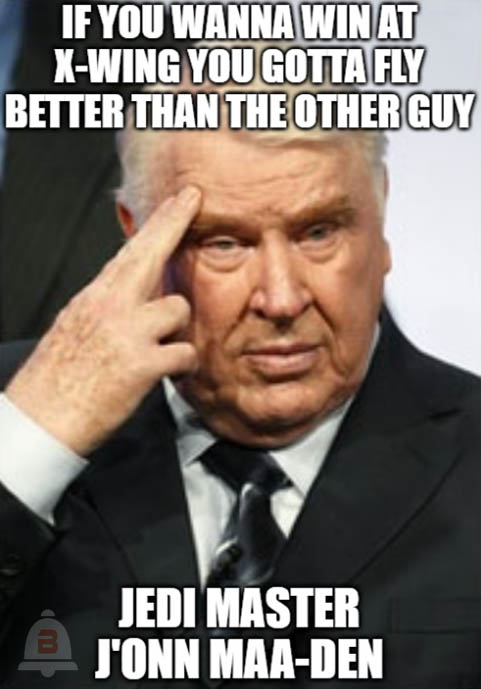 *”If you wanna win at X-Wing you gotta fly better than the other guy.” 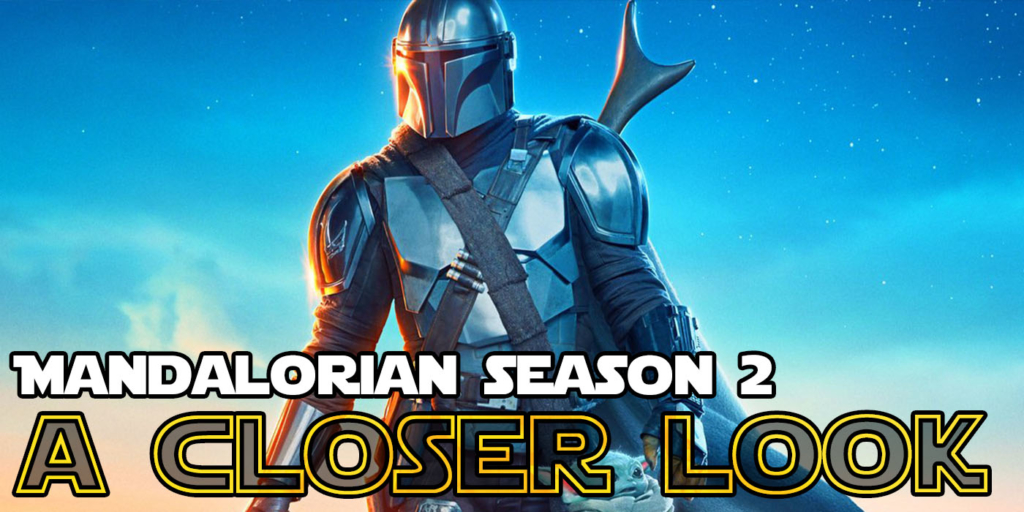