Board Games Retro: Snits Have Invaded My Snorgs and I’m Low On Runnungitms 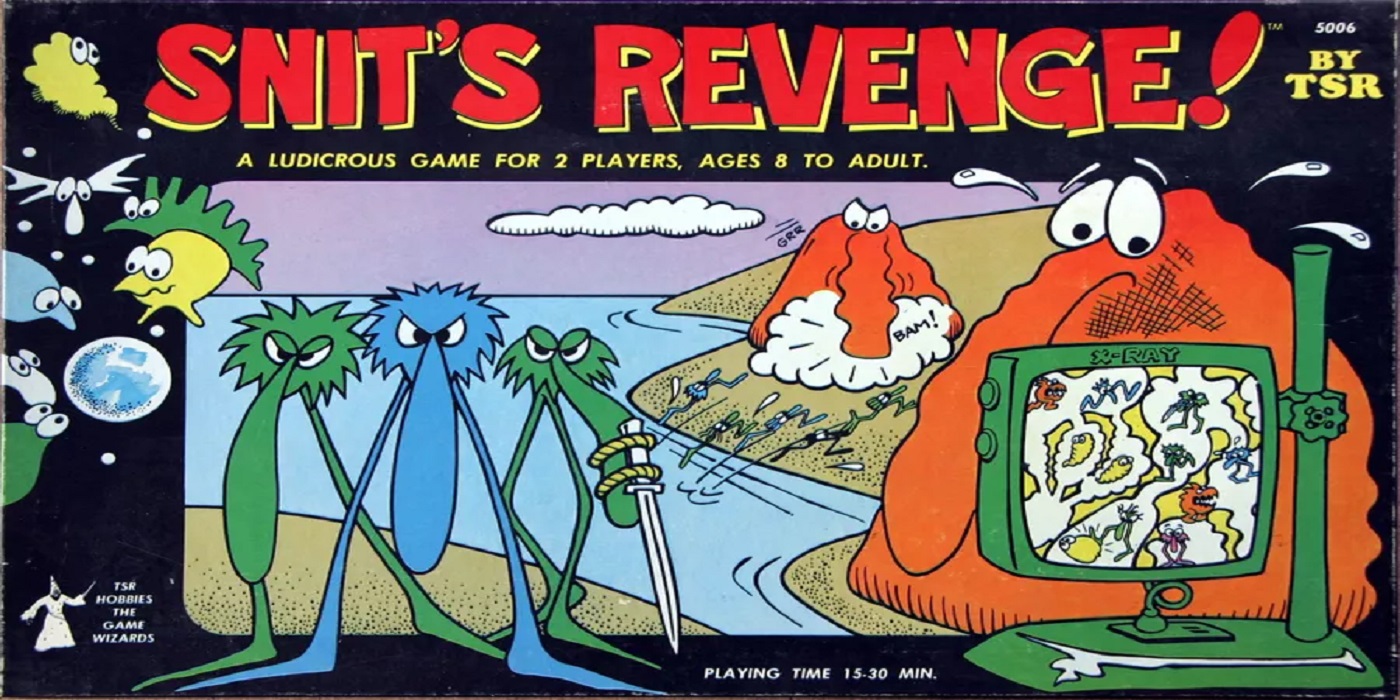 I’ve been feeling sick the last few days and I’m pretty sure little amorphous creatures are kicking my organs until I die.

It’s true. I’m under the weather. Nothing that bad, don’t worry. It’s just small malicious creatures running around in my body trying to strategically attack and shut down each of my organs one by one until I die. No biggie. 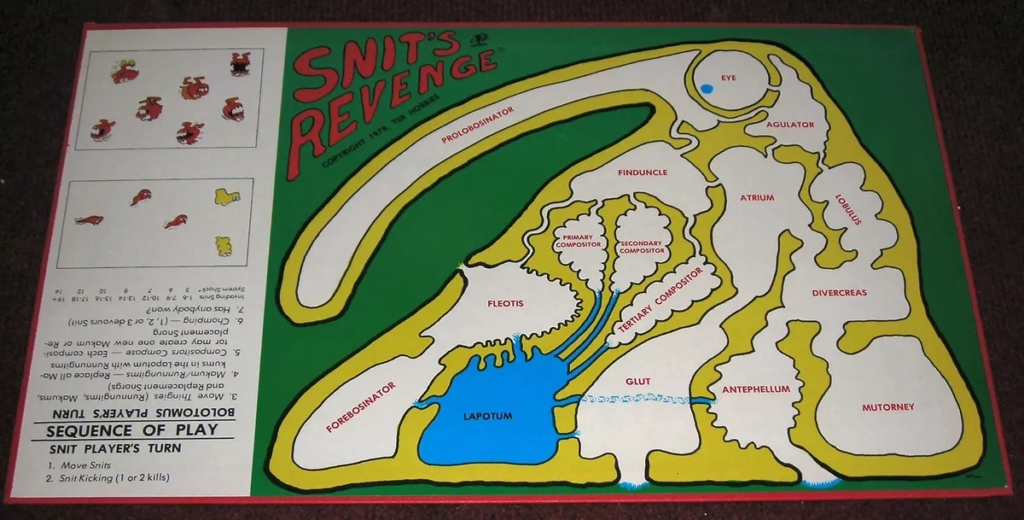 Before everyone goes off finally confirming to themselves that I’ve fully lost my mind, let me explain why I’m so certain this is the case. You see, I have proof in the form of a board game and board games can’t lie. That’s science.

Snit’s Revenge! is the sequel to Snit Smashing, both of which were published in 1977 in Dragon Magazine. Snit’s Revenge! in Issue #11 and Snit Smashing in Issue #10. Later, the game was given a full boxed publishing by TSR in 1980. But since then the game has received makeover with a full release as Snits!, released in 2003 by Steve Jackson Games.

The story of the Snits is simple and relatable. 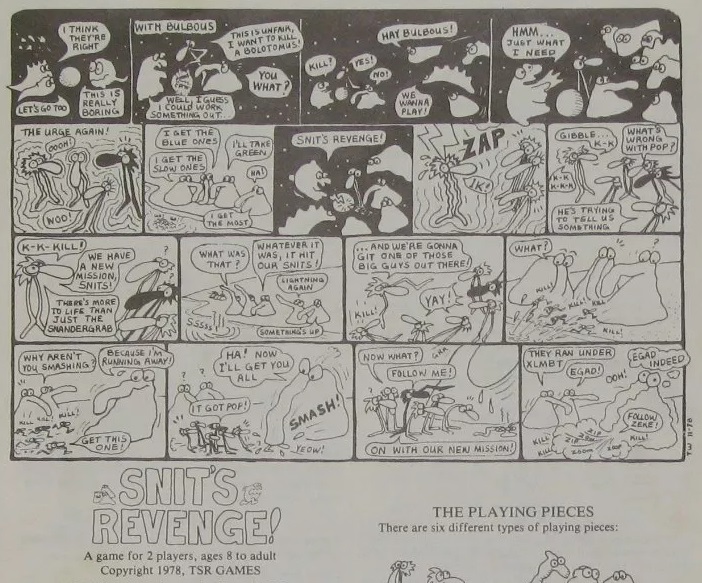 What do you mean by, “I’ve never been more confused by anything in my entire life and I’ve seen Primer”?

Snits Revenge! is an asymmetrical competitive 2-player strategy game with die rolling combat. The game pits an army of Snits against the Bolotomus. The Snits goal is to kick 9 Snorgs or find the Spark of Life while avoiding the Splops. The goal of the Bolotomus is to use their Runnungitms to chomp the Snits. But don’t worry, you can always move your Makums from the Compositors into the Lapotum to turn into Runnungitums or into a Snorg if they got kicked. 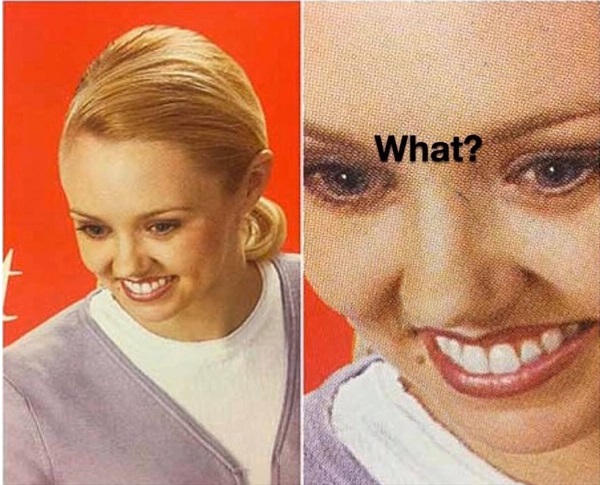 What? You need more explanation?

No, that’s fine…. I just thought you were a real gamer, that’s all. Let’s try again.

Snits Revenge! is an asymmetrical competitive 2-player strategy game with die rolling combat. The game pits an army of Snits against the Bolotomus. The Snits goal is to invade the body of the Bolotomus and attack the organs. The Snits are looking to either shut down 9 organs or find the Spark of Life hidden among of the organs. However, 3 of the organs are decoys and will cause the Snit attacking it to die. 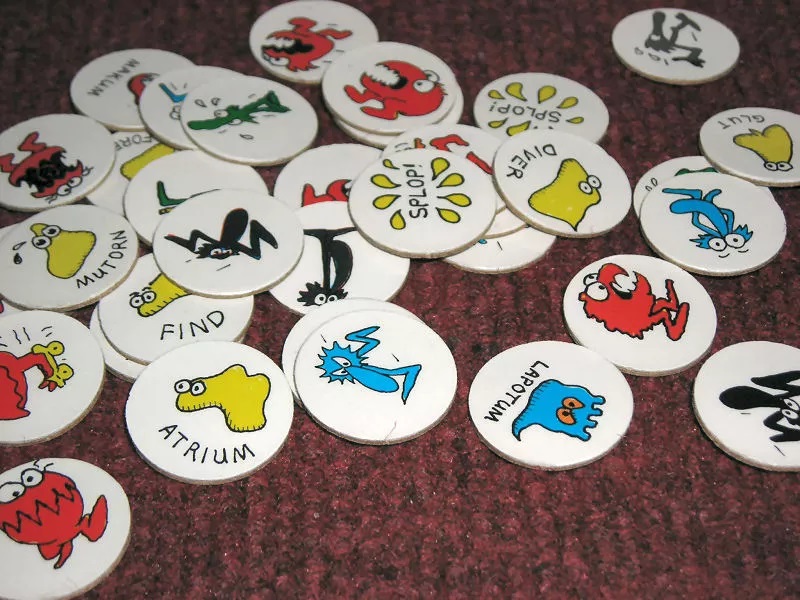 The other player takes the role of the Bolotomus, whose body makes up the game board. Their objective is to kill off 9 invading Snits. They do this with their active fighting unit called the Runnungitum. These units are created in the organ called the Lapotum and can move around the body from there.

Additionally, the 3 organs with Compositor in their name create tokens called Makums. These tokens can move into the nearby Lapotum to become another Runnungitum or they can move into any organ which has been shut down by the Snits to revitalize it. 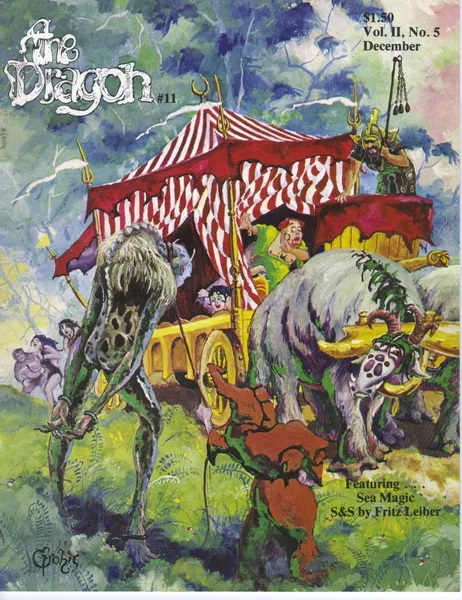 The Dragon Magazine #11 which started this whole adventure

Combat is fairly straightforward. When a Snit kicks, it rolls a die and succeeds on a 1 or 2, killing its target. If a Runnungitum chomps, it rolls 2 dice, looking to get a result higher than the speed of the target Snit (oh right, by the way, Snits have a speed stat). Get chomped kills the Snit, but the Snit has one last chance for revenge, and rolls 2 dice attempting to also get higher than its own speed stat. Success means retaliation and the Runnungitum is also dead.

The Snits win if they can have 9 organs (Snorgs) dead at the same time and the Bolotomus wins if it can kill 9 Snits!

Some Snits kick, but not all Makums are Snorgs. How many Runnungitum to chomp a Snit?

Still, it’s a fun little game and you know I’m a fan of any amount of asymmetry in my games. Overall, I’m a fan.

Also, sorry. I’m not really sick. Sorry for lying.
I needed a hook to bring you in.