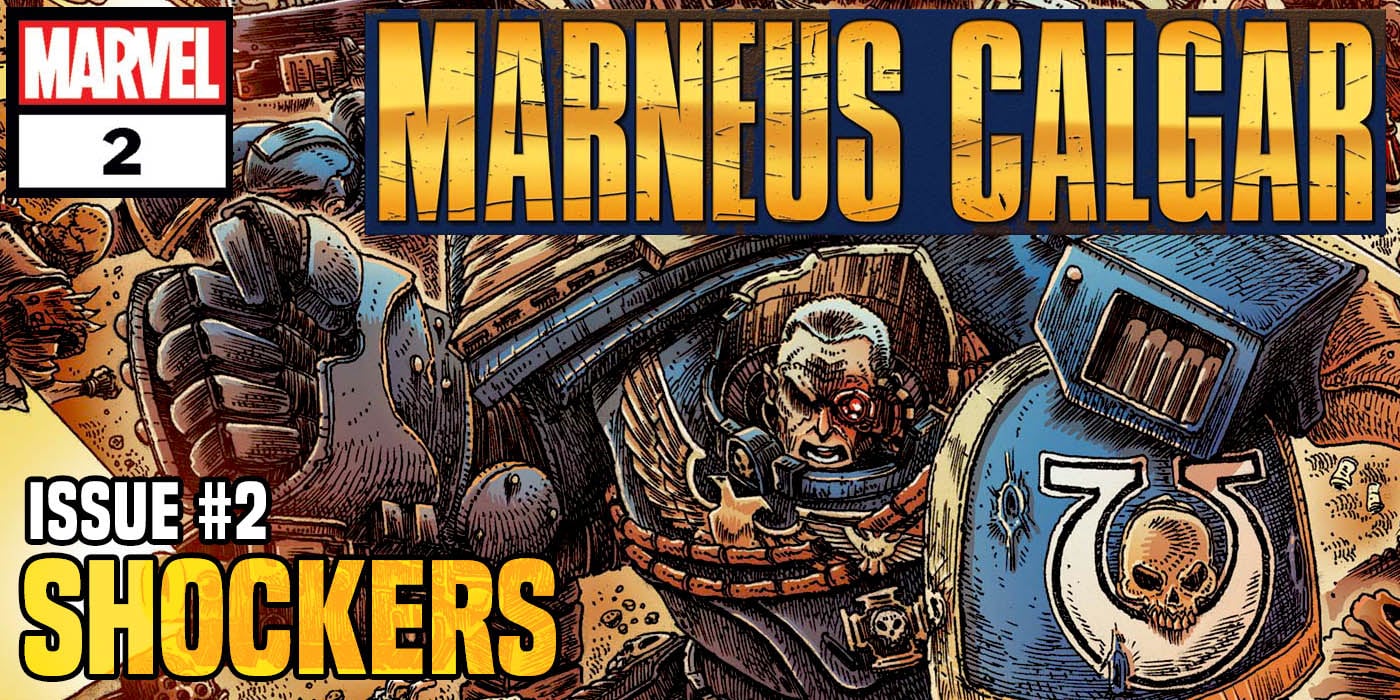 Goatboy, here again, to delve into the next Marvel Warhammer 40k comics. This issue has some real plot shockers and reveals!

Written by Kieron Gillen and drawn by Jane Burrows – this comic delves into more history about one of the grand “good” guys of the Ultramarines – Marneus Calgar.  Or does it?  Be prepared for some spoilers as I dig into the review a bit – which I am sure you’ve read about, maybe raged on line about, and then softly sobbed into your Ultramarine sheets. 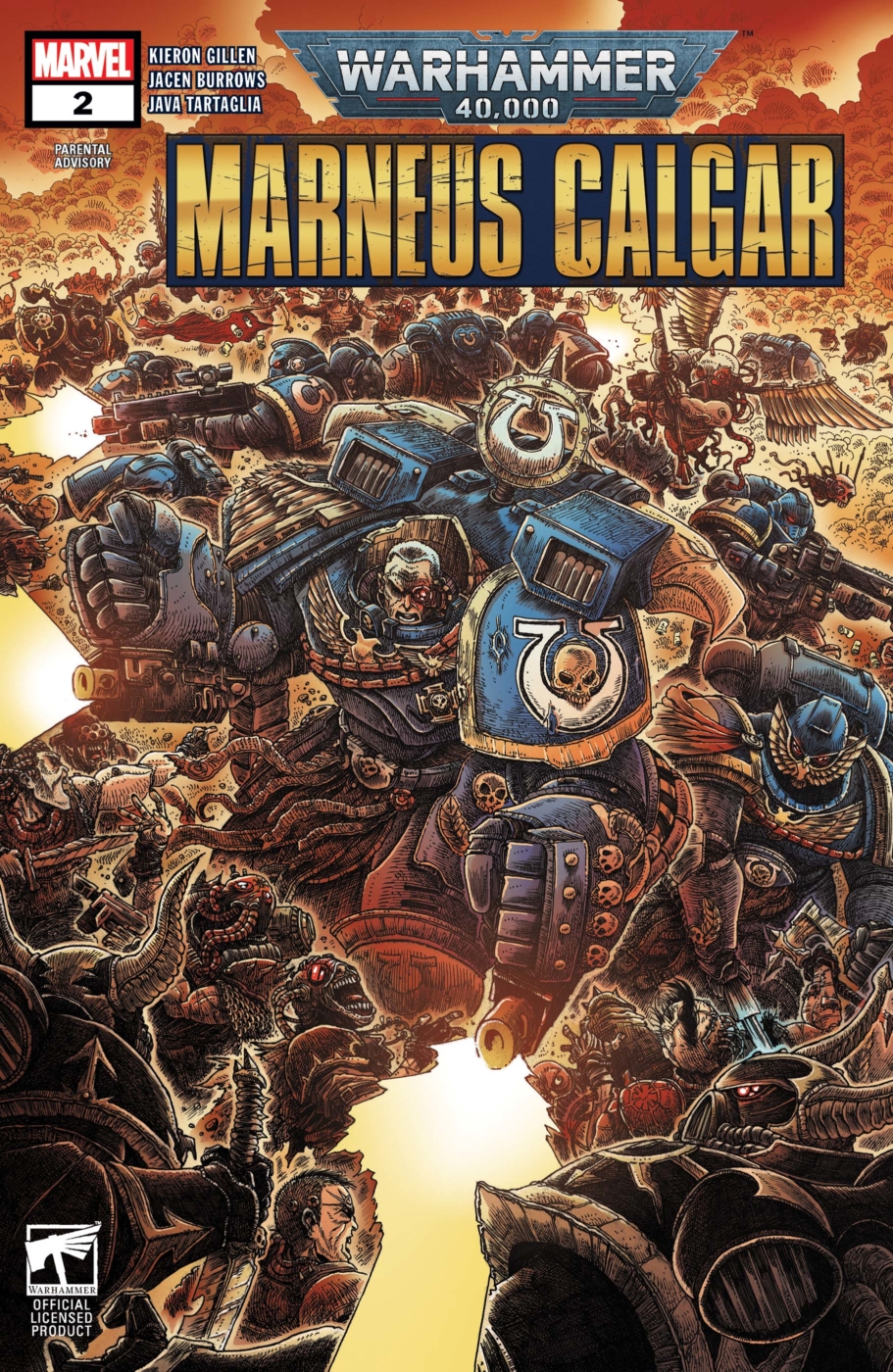 Issue Synopsis: “Descent into chaos! The untold origin of Marneus Calgar continues as a startling discovery is made on the moon of Nova Thulium! But will the young Marneus face his first triumph or a soul-shattering loss? A shocking revelation in the history of the legendary Chapter Master of the Ultramarines that will forever change what you thought you knew!”

Let’s start with the art.  Jacen has a knack for drawing so much little detail in all his panels.  There are tons of lines that show the weird texture of the 40k universe.  Sure we all think of the Space marine armor as this smooth plas-steel plate when it in fact usually has these tiny imperfections.  This is what I see throughout the book.  Each piece of armor looks like it has been used.  The effects of constant war is shown and that is why I really like his work throughout the comic.  The aspect of chaos, the gross nature of the influences of evil, and the grimy nature of it shows in all these awesome looking pages.  I especially like the expressions of desperation, evil, and just sheer determination the characters show in the book.  The colors pop as well as they really do a great job of giving the Warhammer 40k universe a different shade of color than we are used to. 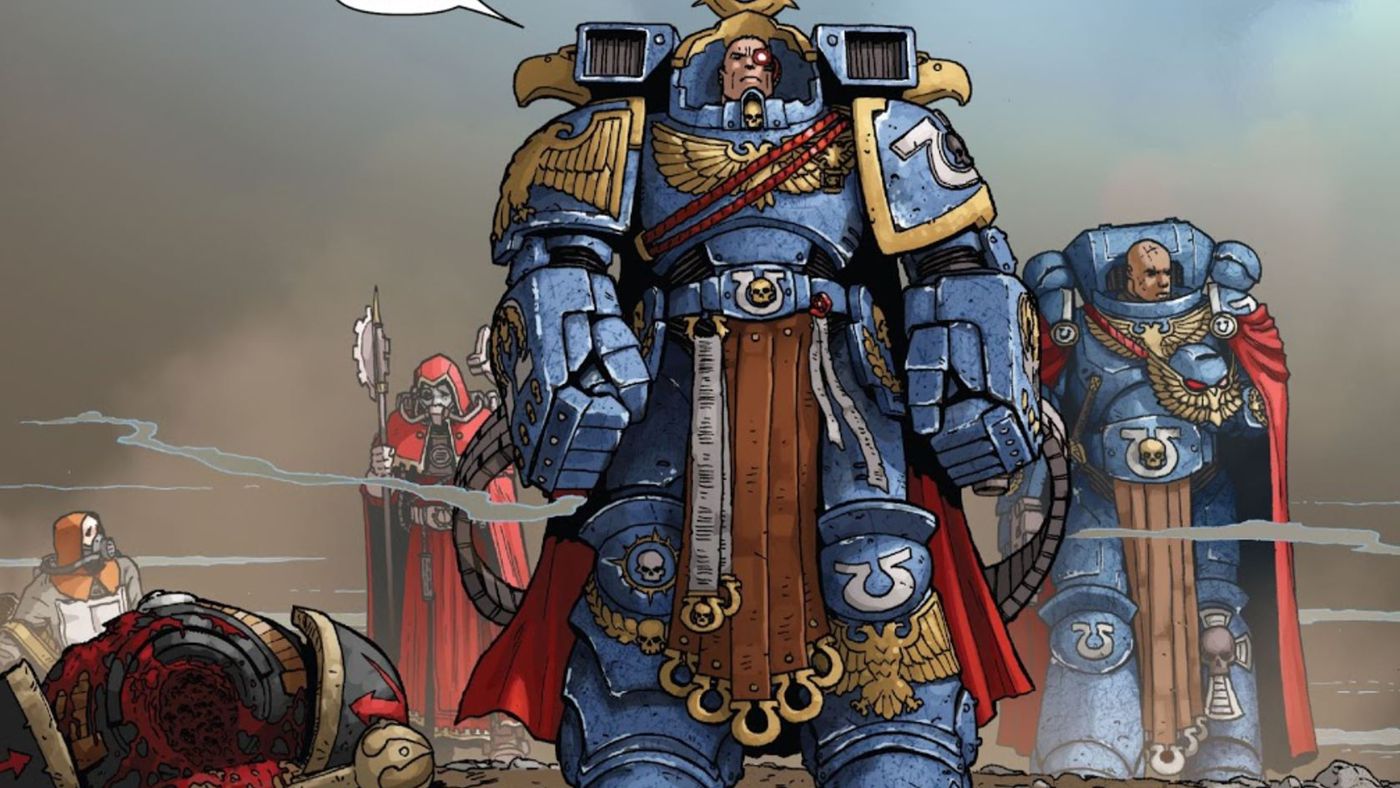 The art is great but what about the story?  This is another setup style of issue that is designed to show you some of the reasons behind the character’s decisions as well as feeding you a bit more of the plot behind the scenes.  You see more of how Marneus was trained to become the Space Marine we know today as well as showcasing how he is a natural-born leader of men.  We also see his determination to not fall into the maw of Chaos and then – well we get the rug pulled out from under us don’t we.

If you want to stop before getting the book I would quit reading any further as the major spoiler of the book will be talked about a bit.  Ok I warned you… You should still pick up the book.

Marneus isn’t the Marneus we are first introduced to.  I know a lot of people online are raging but this sort of reveal does nothing to the overall lore.  The Marneus we know in the games and the lore is the same one.  There isn’t a swap just a shift in what bloodline he actually is from.  In the comic Marneus dies to followers of Chaos – his friends he was training with – and his serf Tacitan takes over his mantle and becomes the Space Marine hero.

These sorts of reveals are great as it makes a rather kind of boring Hero into something a heck of a lot more interesting.  This loss of a friend, mentor, etc and becoming the Hero is a nice setup that will let this comic have some uumph within the confines of 40k history without actually doing massive changes in the overall story.  It just helps make this guy a lot cooler.  I won’t lie I am not the biggest fan of the Ultramarines.  They are were always boring and this guy was the poster child of generic Hero.  A big hulking scholar warrior who always played by the rules and got kicked in the butt by Abbadon.  Now reading these books I feel he is a heck of a lot more interesting.  I am excited to see more and can’t wait to see who is pulling the Chaos Strings in the back of the book.  I am guessing one of his old “friends”. 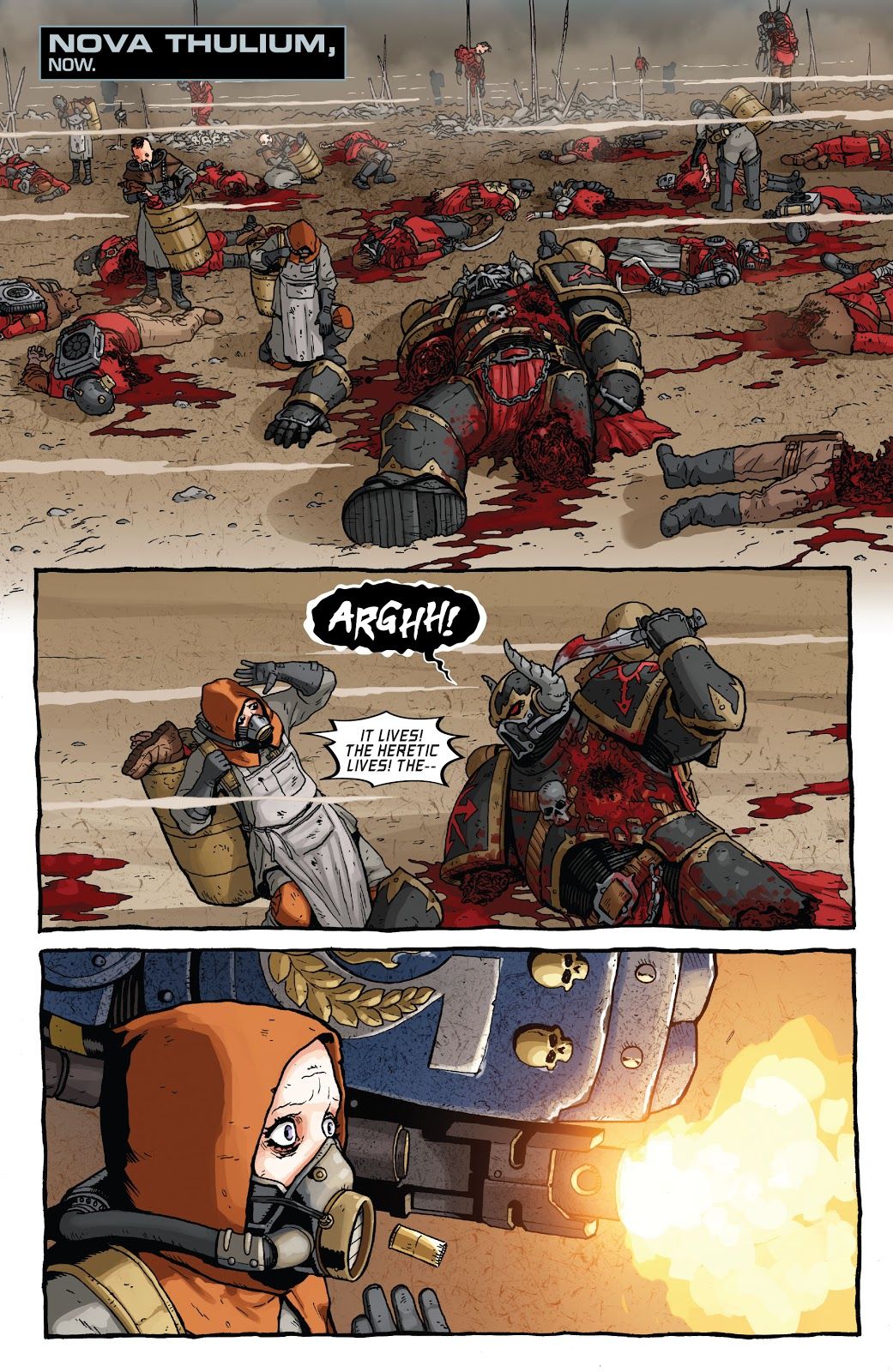 Until next time – go grab a comic or two and get transported to a different place during these trying times.  I read a lot of stuff right now – from Marvel books, some DC, and a ton of Image titles.  There is so much cool stuff out there if you just want to look for it.