From unsettling science experiments in imperial basements to fan favorites from season one, The Mandalorian had a little of everything this week. 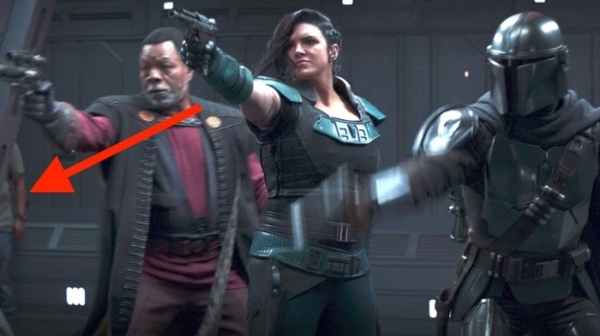 Ok this one is low hanging fruit and not so much an Easter egg as a sploops-up, but that’s why I’m starting with it. If you’ve existed on the internet these past few days, you’ve heard about blue jeans guy in the background. What’s their name? Are they friends with boom mic man? Are they a distant Star Wars relative of Barry Bluejeans? Will the costuming clubs loosen up their rules regarding jeans? Who knows! I mean, we do know, that’s probably someone who works on the set and thought they were out of the shot but weren’t. But I like to pretend they have a rich Star Wars backstory.

They spent this week’s episode on Nevarro, which you may remember from the first season as the base of the bounty hunger’s guild and the location of the battle that destroyed IG-11. In the background you may have noticed a statue of IG-11, presumably honoring how he saved all of their butts last time the crew was together. Here, instead of bringing the child on the dangerous mission to an imperial base, Mando opts to leave them in a classroom full of other kids to get some learning done. Baby Yoda uses the force to steal some kid’s macarons (realistically, also exactly how I would use the force), as a protocol droid talks about Hydian Way, Coruscant, Chandrila, and Akkadese Maelstrom, all well-ish known Star Wars locations. Also one of the students has Rey style buns.

After setting the base up to explode but before getting the kriff out of there, the team checks Moff Gideon’s email to see a message from a Dr. Pershing explaining that they’ll need more Baby Yoda blood to continue their experiments on what looks like cloned or bio-engineered creatures in tanks of liquid. He references M-Counts, which I can only assume is supposed to be short hand for midi-chlorians, and trying to introduce force abilities into otherwise not force sensitive beings, but not making enough headway fast enough. My knee-jerk thought was that the tank-creatures looked a little like Snoke from the sequel movies, and this was driven home by how they may or may not have been playing Snoke’s theme during this scene.

This is such a quick scene right at the end, but there’s a lot of cool (or bad, depending on how you’re looking at it) stuff happening here. The tech pictured here has a patch with the logo for the Imperial Department of Military Research and he is checking on what looks like a whole bunch of Dark Trooper suits. While we can’t say for sure what the new-cannon Dark Troopers will look like, it’s safe to say that their introduction to the Mandalorian’s mission will be bad news bears for everyone.

What did you notice this week on The Mandalorian? Did any of your favorite Easter eggs not make my list? What do you think the show has in store for us with the Dark Troopers and the weird science? Let us know in the comments!