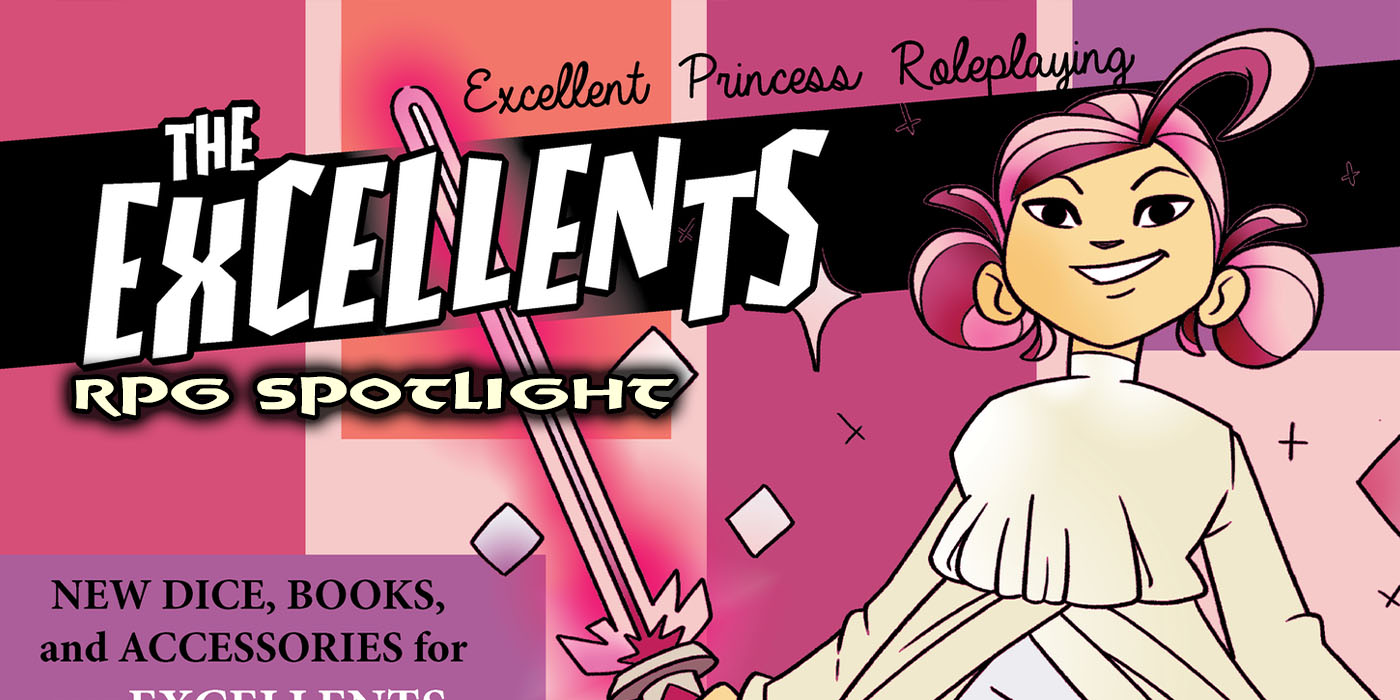 Grab your tiara and chose your magical beast companion, this week we’re all becoming cartoon princess of the RPG Kingdom with The Excellents.

The Excellents is an adorable, surprisingly simple game about being the best princess you can. I’ve only had this game in my life for about a week, but I am in love with it. It’s also one of those where I found the best way to explain it is to jump right in. So let’s jump on in. 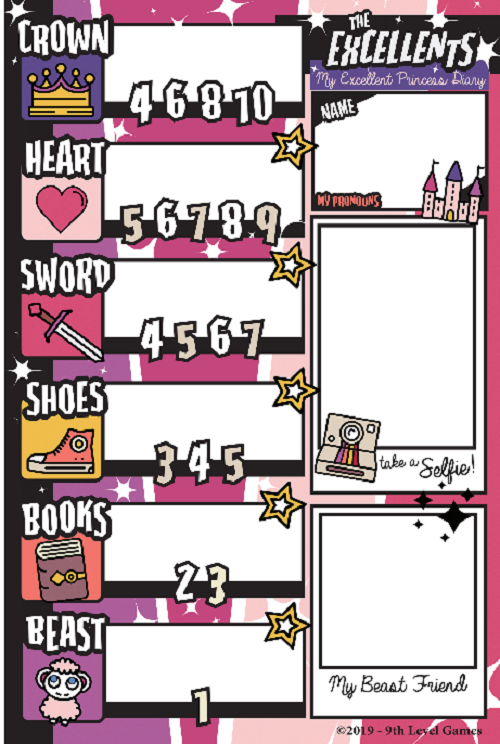 Here is your royal character sheet, sorry, your Excellent Princess Diary. The first thing you’ll want to decide is if you’ll be a magical princess, a brainy one, a charming princess, or a tough cookie. This should be a simple choice for you, but for reasons of simplicity we’re going to circle back around to your princessly role in a few minutes. Next, it’s time to fill in the rest of your excellent diary boxes! Name, pronouns, and selfie I’m sure you already have figured out, but what about “heart”? What about “beast”?! Let’s start at the top. Your crown is your crown. It should be a reflection of you as princess but besides that is completely open to your interpretation. Do you have a Sailor Moon style tiara? How about a Princess Bubblegum reminiscent crown? Perhaps you’re a sporty princess and you’re rocking a baseball cap that you insist is a crown. There really isn’t a wrong answer (unless your GM vetos your choice) for some reason so go wild.

Heart the one word that would describe your princess at their core. “Silly” or “Fun” or “Kind” or “Competitive,’ would all work, but at the end of the day, you know your princess best. Sword is your weapon whether that’s a literal sword, a staff, or a laser gun. Shoes is a representation of how physical your princess is. There are eight kinds of shoes to chose from with boots representing a character who’s more outdoorsy and sneakers represent a more sporty character. Book is a literal book your princess is borrowing from the library that they can reference. It doesn’t need to be a real book, but your GM may not let you have the Big Bad Encyclopedia of Everything in the Entire Multiverse. That said, go for gold. If there’s one game to really push the limits of ridiculousness in, it’s Excellents.

Which brings us to your beast. Every princess has a shapeshifting sprite sidekick who can look like whatever you want. Cerberus the Clow guardian? Sure. A robot? Also good! One of those suspicious little dudes from Among Us? Go for it. 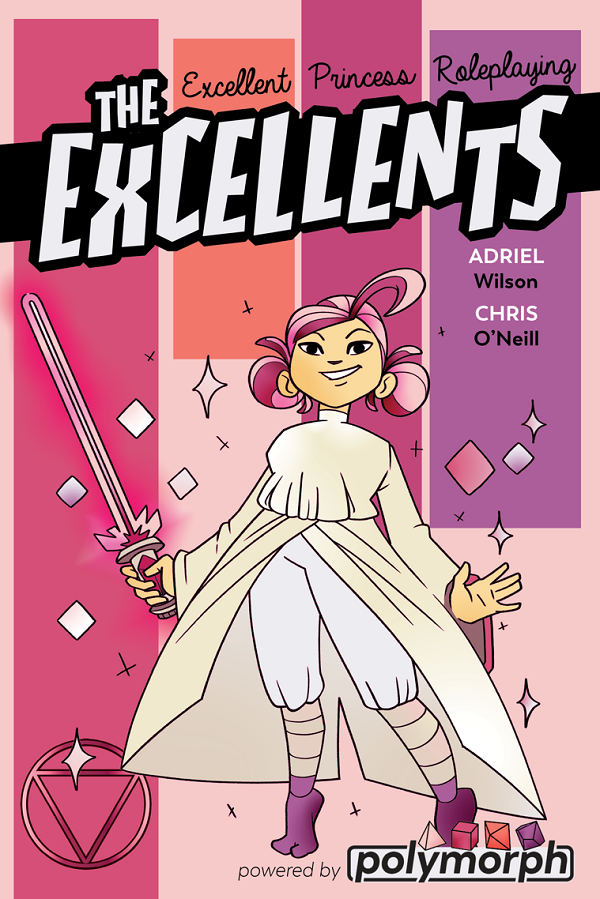 All that’s left now is to pick what kind of kingdom you preside over, and for this part I really want you to channel the Adventure Time idea of princesses. Are you a Waffle Princess? Maybe you’re the Podcast Princess, or the Ska Princess.

At this point I know I’ve used a lot of words to explain a character creation process that will probably take you roughly five minutes and said nothing about gameplay, but the shortest possible takeaway from this is that character creation in The Excellents is a very open ended task with very few concrete rules. You are making a cartoon character.

Gameplay itself is an equally simple affaire where you roll two dice and chose the outcome you want. “But Meaghan,” you may be asking, “What the heck dice do I even roll?” That’s a good question, and to answer we must come back around to what kind of princess you are. You see, every princessly role only gets one kind of dice. A magical princess uses a d4 while a brainy princess uses a d6, the charming princesses have a d8 and the tough princess use a d10. When you need to make a skill check the GM will determine if the skill you’re testing is a matter of heart, swords, shoes, or books and you will want to land on a number in one of those boxes on your character sheet. For example, if your princess is trying to convince another character to help her with a task she will likely be using a skill of the heart and want to role a 5, 6, 7, 8, or 9. 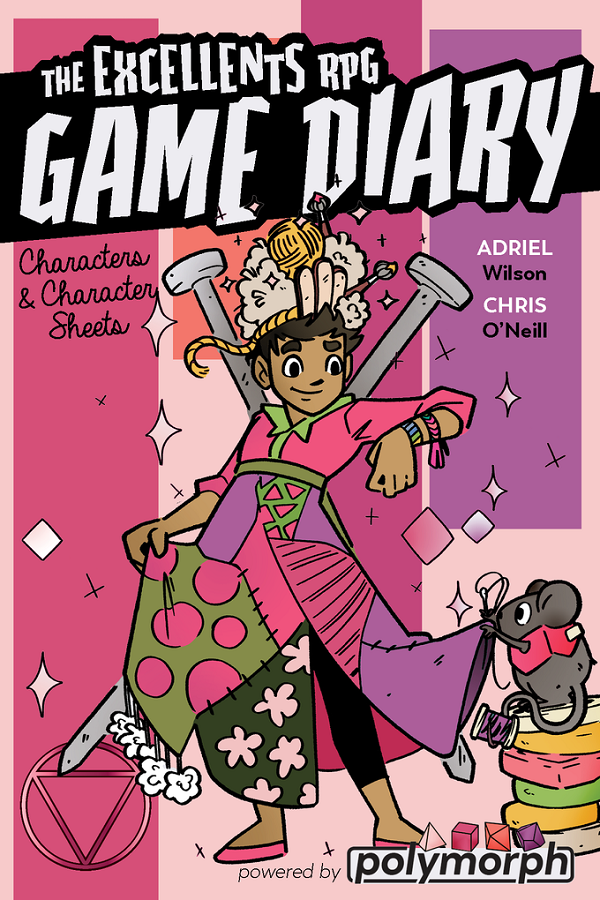 Obviously a magical princess would have a difficult time with this task as d4s don’t get high enough to roll a 5, but a tough or charming princess would have a decent chance of success. That said, a magical princess would almost always succeed at checks relating to books or shoes skills. It creates a system where every character is good at something and bad at something. This doesn’t mean the game wants you to fail, however. Rolling a 1 can result in help from your beast if it’s a situation where beastly intervention could help, and failing while rolling one of the numbers in the crown box will allow you to use your powers as princess to help should the check be assisted by princessly authority.

If none of those apply though, you still can fail a roll, and that’s okay. Failure earns you a lesson token that you can use to bypass issues later or pool with your team to overcome the big end-of-episode sort of problems.

The Excellents is a player and story focused game of cartoonish adventures through a world of your wackiest design. It’s not meant to be difficult or daunting and the simplistic design makes it perfect for kids wanting to get into tabletop RPGs just as much as adults who really appreciate the silly Saturday Morning Cartoon genre. The Excellents feels like if somebody smashed Adventure Time and She-Ra together and the resulting mess was a pastel wonderland for you to explore. It’s a truly delightful game that will make you feel like a little kid again.

If you’d like to check out The Excellents for yourself, you can learn more on the 9th Level Games website.

Have you played The Excellents? What kind of princess would you make? What kingdom would you be from? Let us know in the comments!