OMG OMG OMG – let’s take a look at the previewed cards for the Old Republic fleet!

Guys, begun the Clone Wars have. The first of the Armada Clone Wars ships, which I’ve been looking forward to for literal years are coming in all their glory. This week as they go up for pre-order FFG has given us a good look at some of the ships and cards we are getting with them. Let’s take a look at the awesomeness. 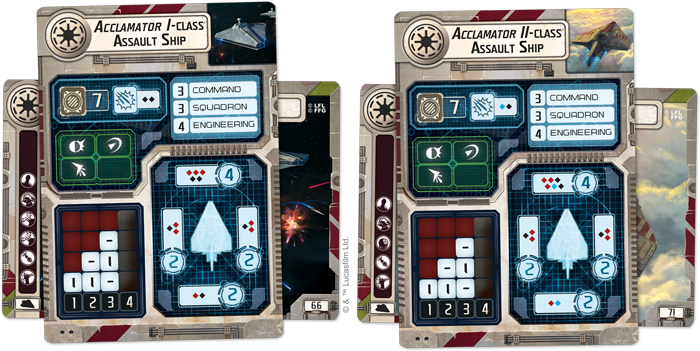 The core of the new Old Republic fleet is the Acclamator, a proto Star Destroyer used a lot in the early days of the Clone Wars. The Acclamator is a pretty solid medium ship and shares a lot of similarities with the Victory Class Star Destroyer, fitting the general feel of the Old Republic as Imperial capital ships and Rebel squadrons. The I-class has slightly less firepower than a VSD while the II-class is about the same, though both are fairly close range vessels mainly armed with powerful red/black dice. They’ve got the same number of shields, though theirs are more well rounded with weaker flanks and stronger fronts and rears, and one less point of hull. Command, Squadron, and Engineering are all high, which does let both versions act as carriers. They are faster than VSD, being able to go speed 3, but not very maneuverable. They do have solid upgrade bars with both versions getting torpedoes and turbolaser upgrades. At speed 3 I can see these potentially being good platforms for Expanded Launchers.

Both ships are fairly cheap, running below a VSD, at 66 points (Order 66 reference?) You could run a lot of Acclamator Is in a fleet. These ships also have solid anti-squadron firepower and can take Gunnery Team. Overall while these ships aren’t stand out crazy, they seem like a very solid medium unit, without the extreme slowness of the VSD, indeed point for point I think they are slightly better than a VSD. This looks like a good start and something to grow on. 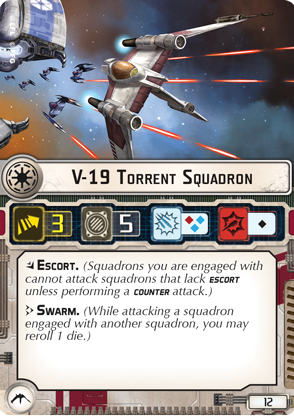 The first of the Old Republic fighters we’ve seen the V-19 torrents seem like a solid workhorse squadron. They aren’t super fast but have 5 hull and escort and swarm are great. They share a lot with an X-wing, trading bomber, and some dice for escort. Still having a tough escort ship is good. They are pretty cheap. They will do, even if they don’t do anything new. 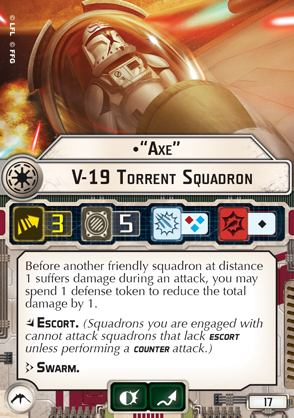 “Axe” is a pretty cheap unique V-19 squadron. Sadly he doesn’t have a scatter token, instead of having a brace and evade. This makes him not the best ace, he also doesn’t get any better stats. He can however spend his own defense tokens to reduce one damage to a nearby friendly squadron. In essence, he is a super escort, not only taking shots for friends but spending his tokens to keep them alive. On his own, it’s not much, but he could be great at protecting a key squadron for an extra turn. At only 5 pts more than a regular V-19  he’s not a bad buy. 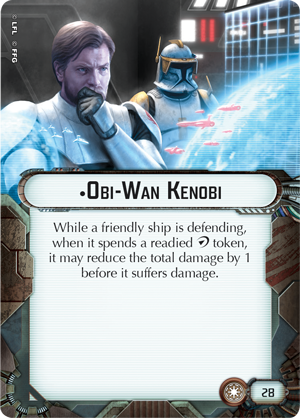 Old Ben (Young Ben?) has been shown off before and he remains great. He’s on the cheaper side for a commander and has a solid if not game-changing effect, allowing you to reduce damage to your ships. In order to make him work you really need ships with redirect tokens, preferably more than one. I don’t think we know about enough of the Old Republic ships to say just how good he is (he would be an amazing Rebel) but he seems like a good, but not a transformative commander in the right fleet. 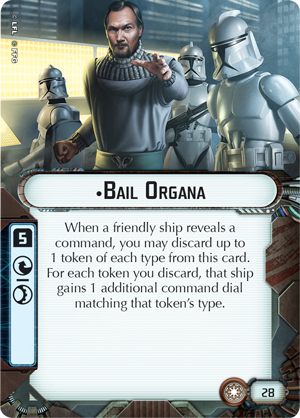 Another Republic commander, Organa (in a manner not too different from his adopted daughter) lets you do some command manipulation. In this case, he can give engineering or maneuver command dials to friendly ships. This gives them a full dial, not just a token so is pretty rad, not only giving you extra flexibility if needed but also allowing you to use multiple dials in one turn. His charges are limited however so he’s going to work best in a fleet with few, larger ships, that can really benefit from his power. 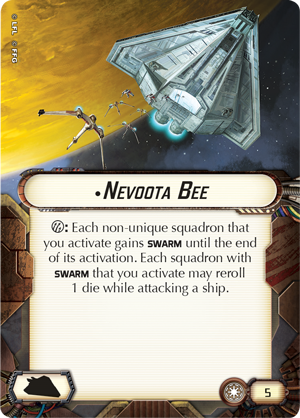 The Nevoota Bee is a title upgrade for an Accalmator. This upgrade makes them a better carrier, giving swarm, or extra re-rolls, to squadron activated by the ship, though sadly it doesn’t work on unique squadrons. An Accalamtor-I with expanded hangers can push a lot of squadrons, making this a potentially very powerful card for a carrier to use. 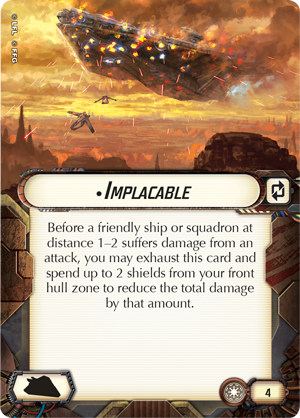 Implacable is another Accalmator title, that lets you spend your shields to reduce damage to a friendly ship or squadron. While it’s a high price, it could be worth it to keep a vulnerable ship alive. Combined with Axe you could prevent 3 damage to a squadron, or with Kenobi, a ship could prevent 3 damage before using its shields. That’s a decent amount of mitigation and if a ship is caught in a bad crossfire could be the difference between living, and getting to attack, and dying. It’s also another sign of how the Republic fleet really wants to work together. 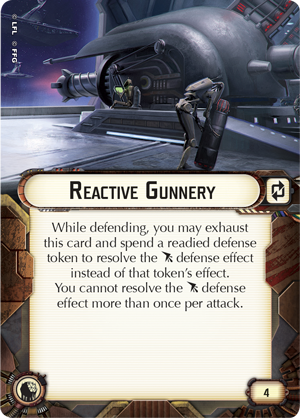 Reactive Gunnery lets you turn a defense token into a salvo token, letting you get back at the enemy a little bit. I’ll admit salvo isn’t my favorite, since it launches pretty weak attacks and I’d rather have something to keep me alive, but there might be a ship down the line this really works with, though so far I haven’t seen it. 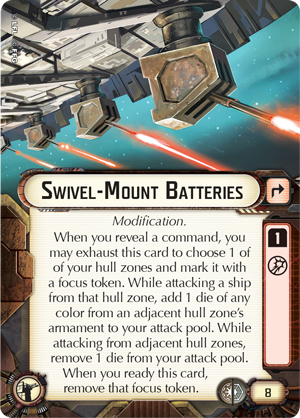 Swivel-Mount Batteries is a pretty rad card, that reminds me a bit of my beloved slaved turrets. It’s limited to Old Republic and Imperial ships and effectively lets you take a die from one zone and add it to the battery of another. It’s not a cheap card however, and it’s really best paired with Gunnery Teams where it will net you two dice on your attacks, rather than just moving dice around. Its got a lot of flexibility since it not only allows you to pick the zone when spending a command, but it allows you to pick the dice you add (from the zones other pools) each time, letting you for instance take red dice at long range. and then swap to black at close range. An Accalmator running this and Expanded Ordnance, and a using a confire command could get a ten dice frontal attack, with six black dice, 3 red and a blue, which is pretty scary. 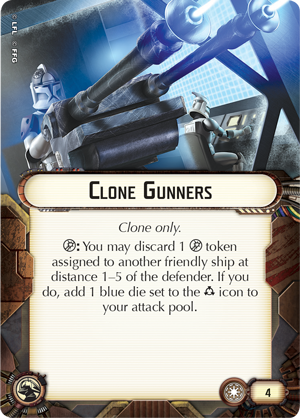 Clone Gunners is another card that was shown off a while back. It’s another sign of how Republic ships like to work together, letting you spend a friendly ships confire token to get a free accuracy hit. This can let you big ships “feed” off a smaller support ship to deliver truly heavy attacks. However, it would prevent you from taking gunnery teams or another weapon team upgrade, which is a highly competitive slot. 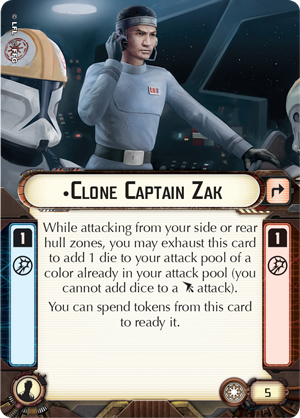 Zak lets you add dice to a side or rear attack. This isn’t a horrible option and can be quite powerful, however, I generally look for cards that add to my frontal attack. We really need to see more Republic ships to tell how good he will be. 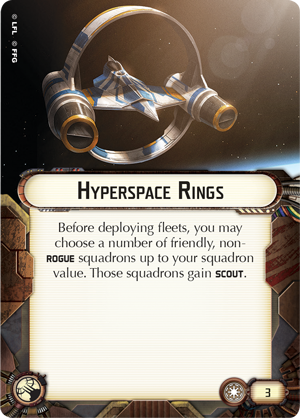 A cheap upgrade that lets you forward deploy your fighters. This seems really solid as it can let you place bombers in position early, or get a fighter screen up to prevent enemy surprises. You could for instance dump a number of bombers on an objective preventing the enemy from grabbing it with a light ship. This seems really good. 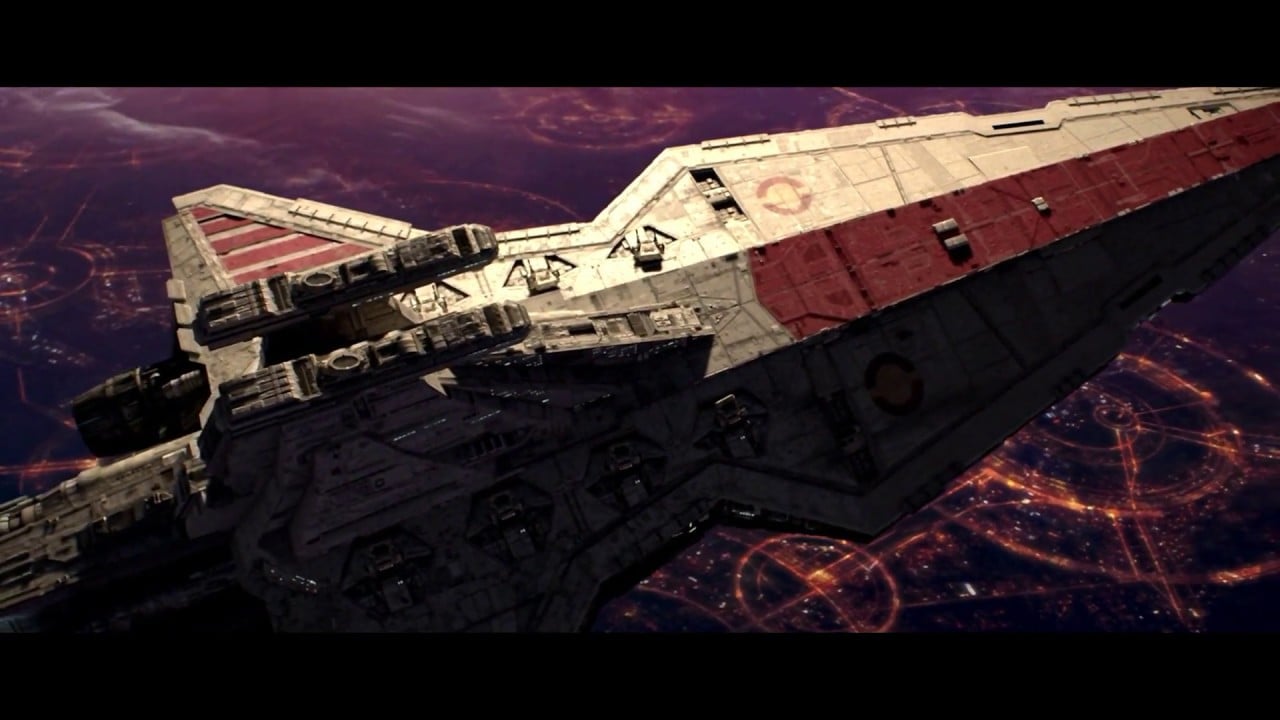 Let us know what you think of the new cards, down in the comments! 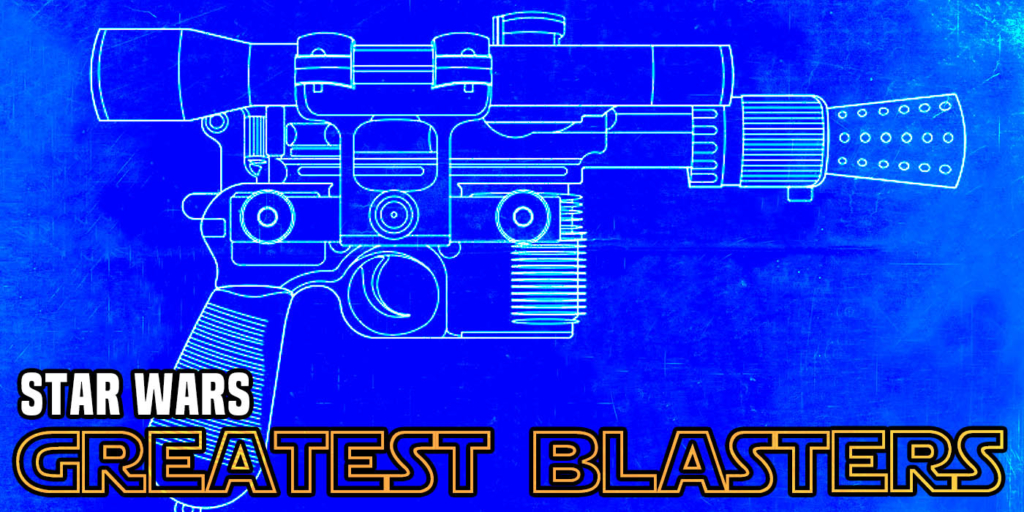