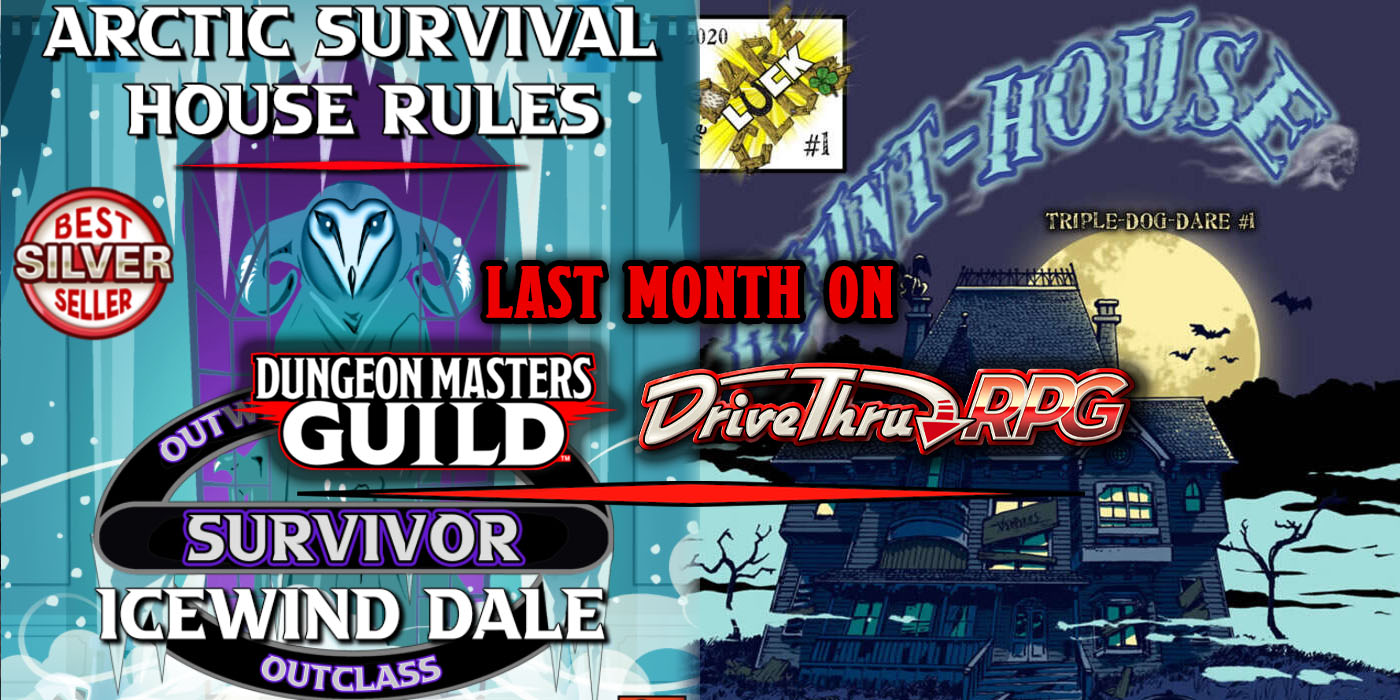 Adopt a dungeon pet, explore many Earths, and add the Duck of Many Things to your inventory as we go through the last month on DriveThru RPG and DM’s Guild. 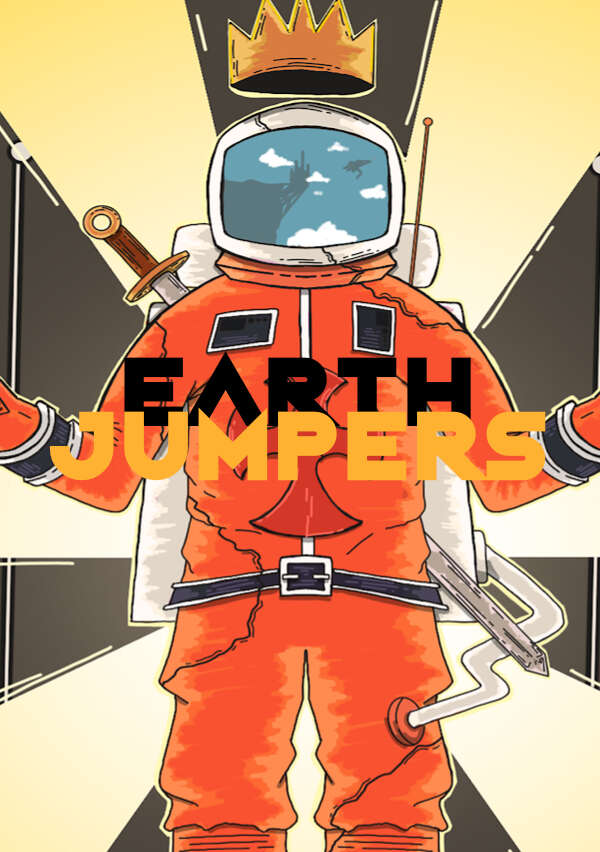 “EARTHJUMPERS is a pamphlet micro-setting designed to be used with the Troika! RPG. In it, you play as a brave Earthjumper, humanity’s last chance at rebuilding Earth, after the devastating cataclysm that shattered it. Visit innumerable alternate versions of Earth, all of them with their own problems, in a race against time to complete your mission and return to your own earth. Will you fight the terrible Jawari, sabotage their unfathomable plans, and gather all the crystallized alternomium to heal your version of Earth? Or will you simply disappear with a loud “pop”, nobody even remembering you existed in the first place?

Within this pamphlet you’ll find:
– A brief setting description
– A new Background for Troika!: the brave but doomed Earthjumper
– A table of reasons why your Earthjumper squad would be sent to a parallel Earth
– 10 possible alternate Earths
– The terrible Jawari. Did anyone say space llamas?
– Possible mission complications”

This is such a great concept for a game. The idea of it has be excited to explore countless different earths and race to save my own. Mixing in the basic sci-fi concept of normal technical difficulties and complications and I am completely sold. Plus, space llamas. Stop talking! I’m already sold!

Something is Rotten in the City State of Dennmarsh 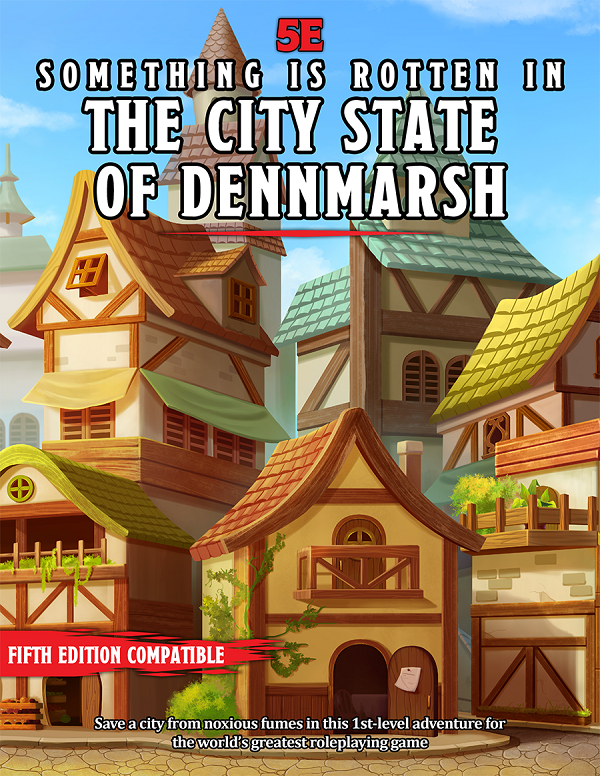 “There’s been trouble brewing in the city lately. A foul smell has begun creeping up through the storm drains and the water in homes and businesses has grown rank and sickening. The Council of Nine, the ruling body of the city, have put out notice of a reward for anyone who can purify the city’s water source and deal with the horrible stench. The worst of things seems to be centered around a particularly wealthy part of town. Some believe that something in the sewers is causing this. Perhaps an otyugh or some other manner of filth creature. At least one adventurer has gone into the smelly depths, but he hasn’t yet returned. Maybe you’ll have better luck?”

This reads like the hook for a very classic fantasy adventure, and I’m into it. What are we saving the city from? Stink! Who’s smelly? The rich people, apparently! This game all but promises a sewer encounter with disgusting smell creatures below a bunch of mansions and that alone may be worth it. 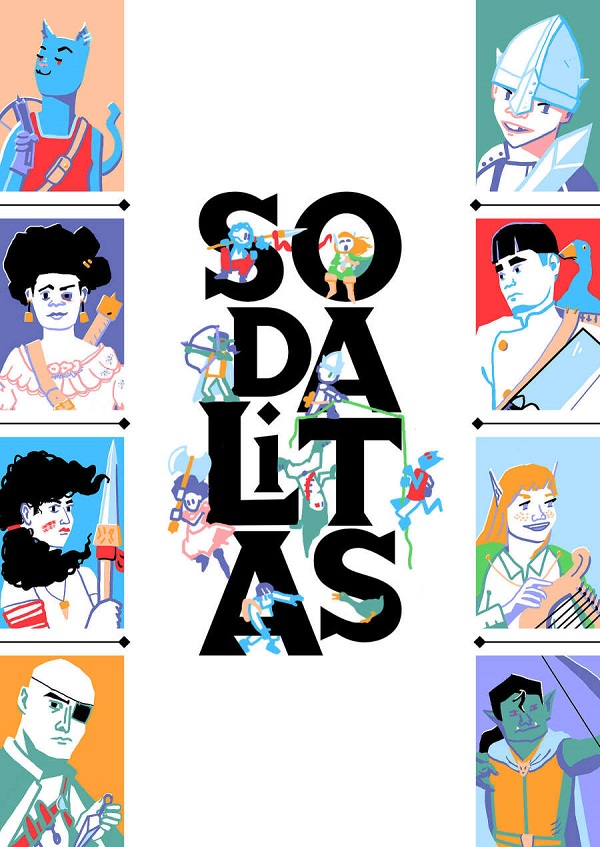 Sodalitas is a one page (and some) tabletop roleplaying game, written and illustrated by Jan Van Houten, edited and laid out by Nicolas Folliot. These rules have been designed and tested for short sessions with many enthusiastic players, and are here presented with ready-to-play adventurers and everything you need to play.

All of this in 4 pages + bonus added with new versions (currently 1.1):

With few rules and four-word character creation, this game looks like it could be the rules-light simple game of my family game night dreams. Shorter game sessions lend themselves nicely to single night games, short sessions between other games, or newer players and a game based in solidarity wants you to invite all of those people to play. 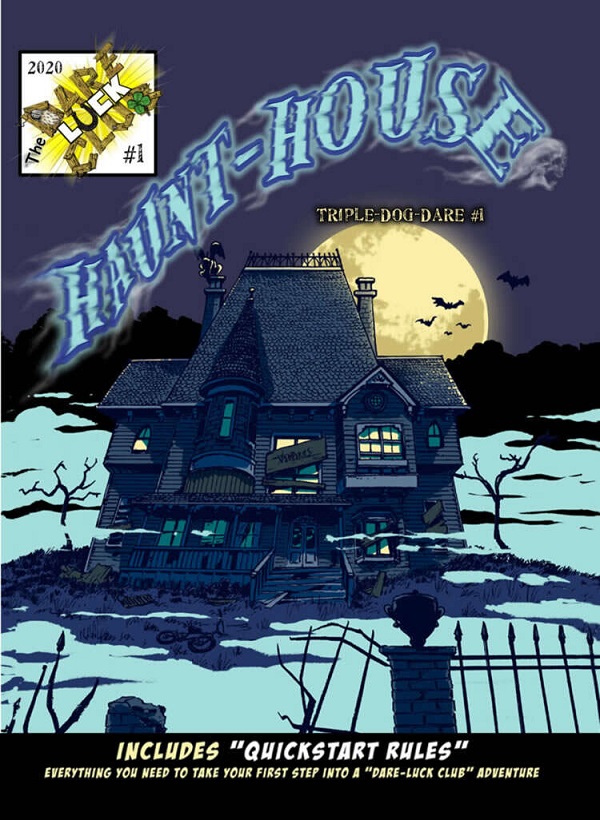 “Do you remember the “haunted house” in the neighborhood where you grew up? The tangly weeds of its negleted yard? The way its rotten porch gaped like a mouth of blackened teeth? The scaley dishovelment of its siding? How long when passing would you stare through its windows, driven to catch a glimpse inside -yet terrified of what you might see? Haunted houses play a seminal part of growing up in small-town America. This adventure follows a club of adolescent misfits as they explore a haunted house.  -Ya’ don’t REALLY believe in GHOSTS -do ya’?

Haunt-House is part of a “Triple-Dog-Dare” for the upcoming RPG game “The Dare-Luck Club.”   It is a collection of 3 adventures themed around an exquisite map of an abandoned Victorian manor.  Search for Old Man Grendalbach’s fortunes in, “House of Grendalbach.”  When a inquisitive youth disappears, your club comes to the rescue in, “Timmy’s Missing.”  -And finally, help the new girl wage war against the hellspawned creatures that plague the house she just moved into in, “The Grendalbach Gremlins.”
This book also contains “Quickstart Rules” that will teach you to play a Dare-Luck Club game using one of the 6 pregenerated characters provided here in.
So, come on, Dare-Luckers!  Grab a flashlight, a couple cans of Fizzy-Gulp, and your mom’s silver letter opener (hey, ya’ never know!) -THERE’S ‘SPOLRING TO DO!”

Halloween may be over, the exploring spooky houses should be a year-round activity for rowdy kids! Your group of adolescent misfits double-dare each other to wander through a Victorian manor, and it will be fun because it’s probably not haunted. Okay, it may be haunted… It’s definitely haunted but you’ll have fun anyway! 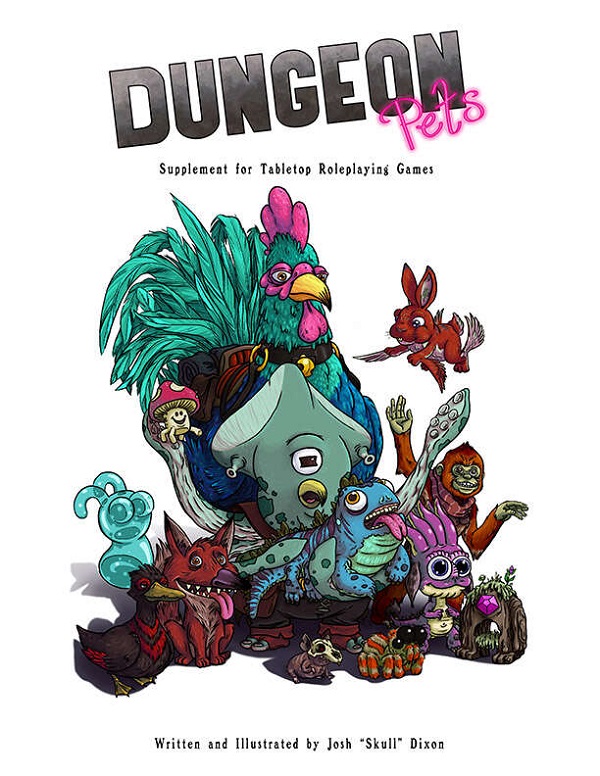 “Hello and welcome to Marv’s Fabulous Magical Emporium, the universe’s foremost traveling bazaar for all things magical and full of wonderment. Today is your lucky day my friend, as I have many strange and wondrous creatures in stock that make excellent and entertaining pets for discerning adventurers such as yourself.

Dungeon Pets is a system-neutral Illustrated bestiary that includes a guild on how to convert these monstrous pets over to any game system. Each pet comes with some basic stats, a full description, and a listing of various traits such as abilities, habits, and ecology. Everything a Gamemaster and Player will need to bring these creatures to life in their game.

DUNGEON PETS IS AN RPG ZINE THAT INCLUDES:

You know how every game has at least two party members who want to teach every monster to love and claim them as a pet? I am usually that party member. Dungeon Pets gives you the opportunity to give those players a pet that probably doesn’t want to eat them and gives you the tools to add pets to almost any game. Just make sure to take them out for regular walks. 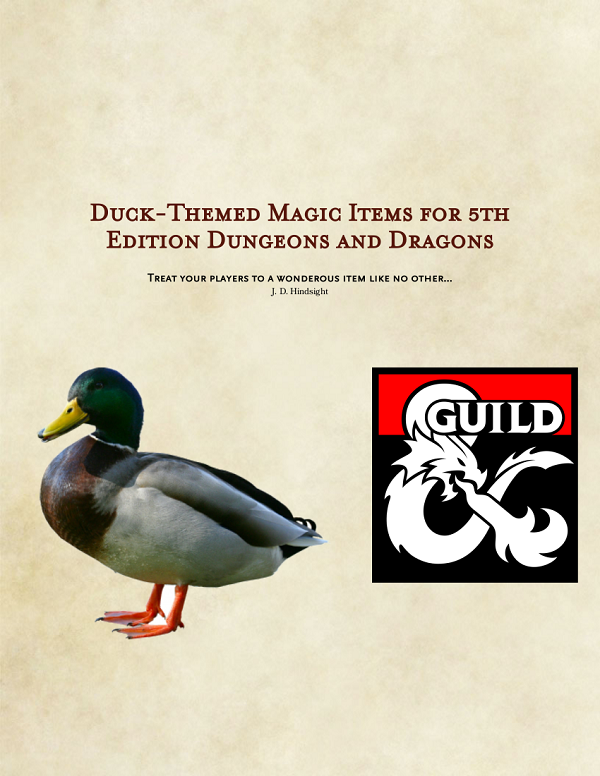 “A collection of 20 Homebrew Duck-Themed magic items for 5th Edition D&D including but not limited to ‘The Duck of Many Things’.”

Honestly, I way buy this for the Duck of Many Things alone. This is the exact goofiness that I love seeing in D&D. Why not add 20 duck themed items to your game? 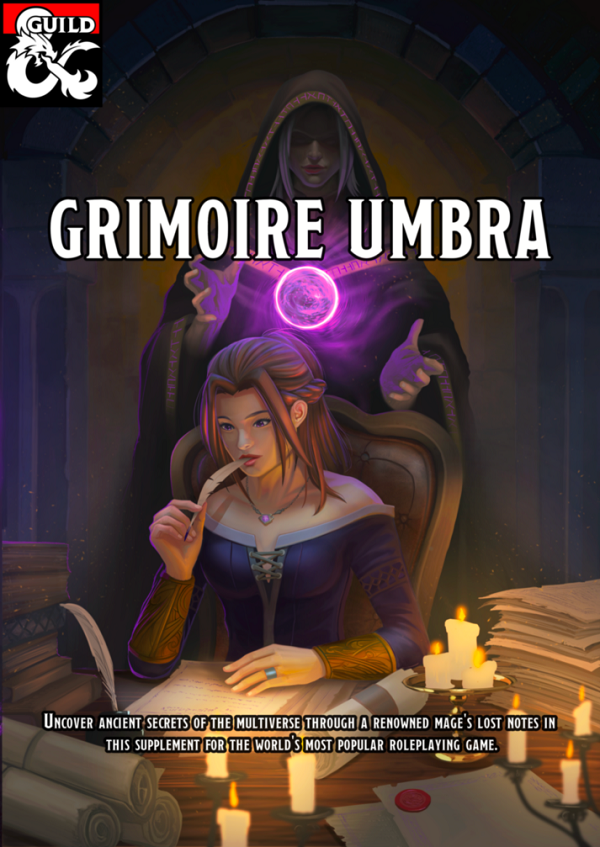 Orphaned on Toril shortly after birth, “Sombra” quickly took to magic, growing into to a formidable caster by the age of twenty. It was at this point she she stole a cloud giant’s castle as an engagement gift, attained the ability to travel backwards in time, and began bootstrapping herself into godhood. Due to the reluctant archiving work of her wife Mara and her daughter Olivia, this mysterious mage’s notes have been gathered together for the first time, shining a light into some of the most hidden secrets of the planes.

Grimoire Umbra is a rules supplement for 5th edition Dungeons & Dragons, bringing a planar and high magic flair to everyone. Inside you’ll find:

Amid all the material here, Olivia and her mother both have left their notes and observations about the creatures within. Most of them are… trustworthy.”

The concept of this supplement is one that I would want to read if I saw it on the back of a book. It looks downright captivating, and then they introduce new races, subclasses, and spells. I’m personally interested in the Huldra, but there’s almost too much to pick favorites from. 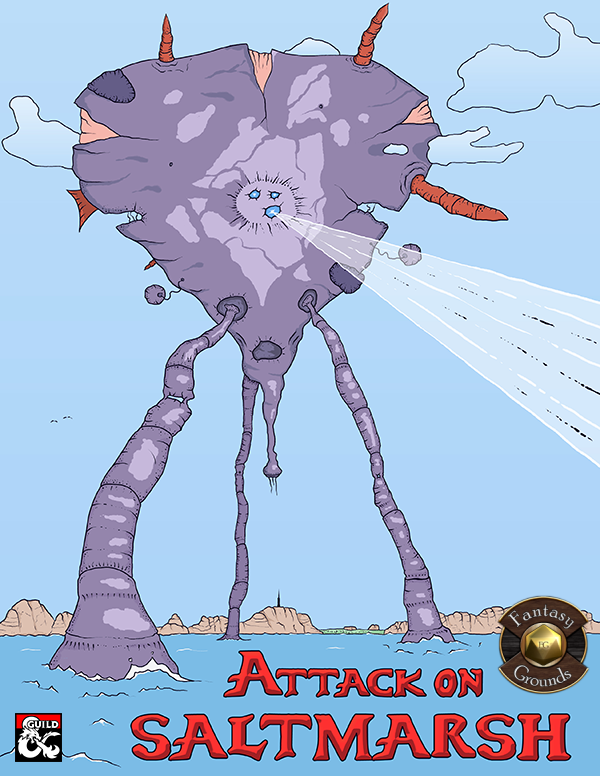 “A capstone adventure for Ghosts of Saltmarsh or a chance to punch giant monsters in the gut.

An ancient prophecy foretells the coming of a great evil.
“When the sea rains into the blackened sky and the dwellers of the deep gorge themselves on living flesh, Ujiak returns to ravage the world.” So sayeth a wise seer.
Only a mighty band of heroes can prevent the coming dark age—with extra-planar technology and superior firepower, that is.

Attack on Saltmarsh is a 4 to 6-hour adventure designed for four to six 11th to 13th-level characters. It is optimized for five characters with an average party level (APL) of 12. It is a dark adventure that features monsters devouring humanoids. Player discretion advised. Although Saltmarsh serves as a backdrop for the adventure, any coastal town setting is suitable with minor alterations as given in the text.”

A little horror, a little adventure, and a little Adventure Time from the looks of it, this looks like it will be challenging and fun in equal measures. Plus, it’s nice to see adventures for higher-leveled characters from time to time. 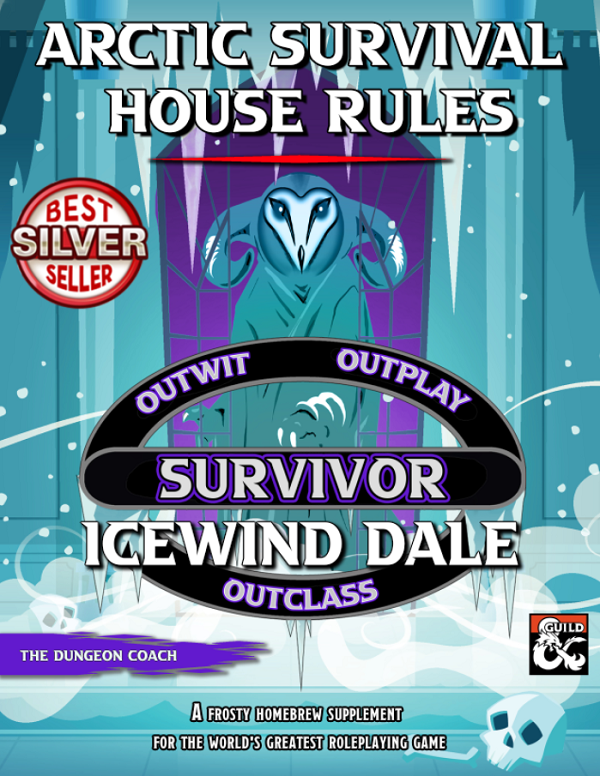 This homebrew content has over 50 House Rules to build and expand upon the realms of Icewind Dale, by presenting Dungeon Masters with in-depth rule options to highlight the terrible difficulty of survival in this setting. The content of this text is meant to be customized toward your players and the type of game you and your party find healthy, enjoyable, rewarding…and mortifying. I would also encourage you to reward your players with upgrades to these rules as they slowly master the terrifying terrain of Icewind Dale.

A major component of surviving Icewind Dale will be mastering survival in snowy terrain. Since your party will be exposed to the elements, there will be consequences to prolonged exposure, both for the party and their physical goods. I introduce a new scaling cold system called Frost Checks, Cold Weather Gear, Item Durability, and some items suited to surviving in the cold.

How to run Avalanches, Blizzards, Death, Lingering Injuries, Travel, Rest, and much more! I have complete breakdowns of each of these along with tips and tricks on how to customize them for yourself.

I have 6 different systems for Skill Challenge type events on how to have your players roll for climactic moments at the table. I also created a new way to roll for group encoutners that combine DM rolls, Player rolls, and Roll Tables all in one quick and efficient system.

Now that Icewind Dale is out for, why not add even more to it?! Additional rules and mechanics bring it from your average D&D adventure to a true survivalist’s dream. Will your characters survive this newly horrifying Icewind Dale? What if there was a cash prize?

Are you picking up any new games or supplements? Did anything stand out to you in October? Are any of my picks making your wish list? Let us know in the comments!