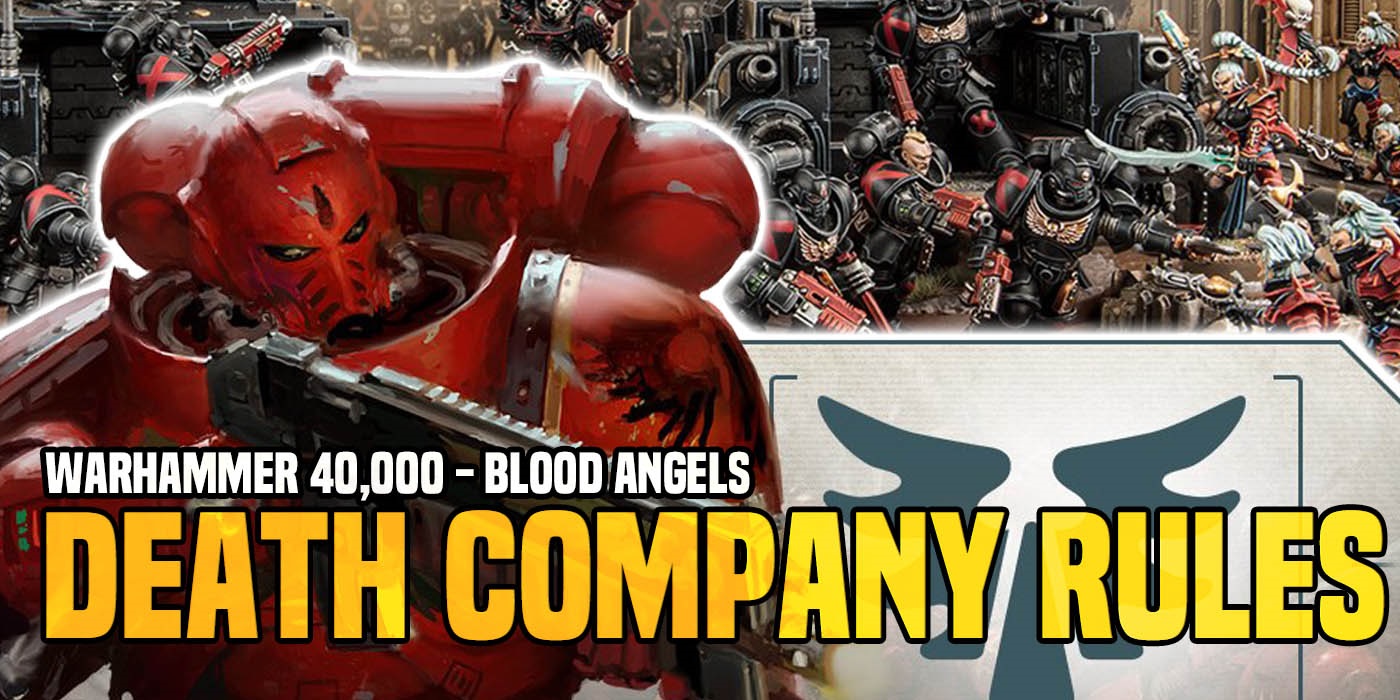 Back in black – the Death Company rules are here! Let’s take a look at the latest incarnation of these cursed sons of Sanguinius. 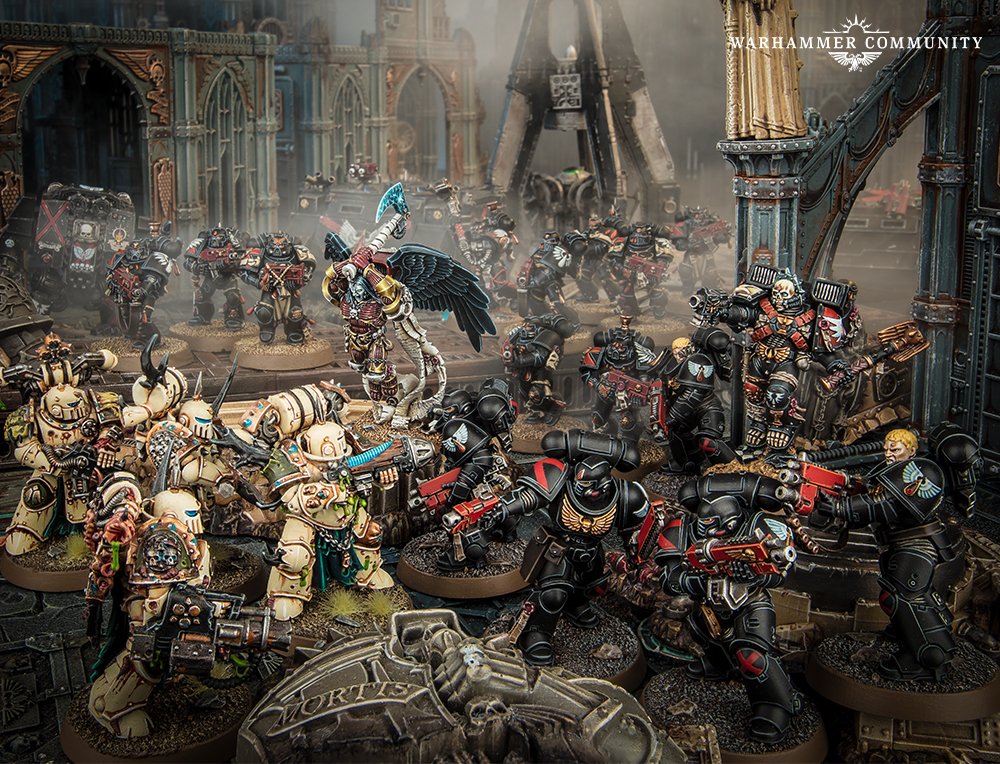 There are few units for the Blood Angels more iconic than the lost brothers in the Death Company. Today, Games Workshop is previewing their rules and we’re going to take a look at how they are going to function in the latest edition. So let’s dive in!

According to Warhammer Community, for each detachment of Blood Angels, you’ll be able to induct up to one Captain and two Lieutenants into the Death Company. Is this an upgrade? Debatable. But it does have a points cost associated with it:

On top of getting the Black Rage and some other “tweaks to their rules,” these Lost characters will also get access to new “Death Visions” abilities. There are three delusions of Sanguinius’ fall to choose from and they provide some extra umph to your characters. 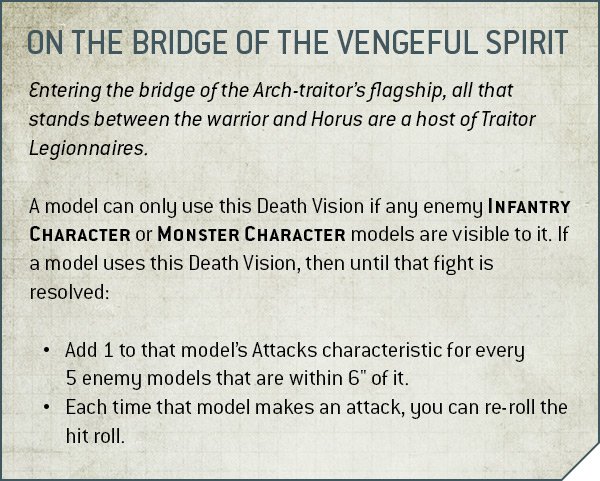 Extra attacks for enemy models nearby and re-rolls to hit? That has some potential to add-up quickly. And since auras don’t work quite the same way, this could come in handy…But there are more options, too. Like the new Stratagem: 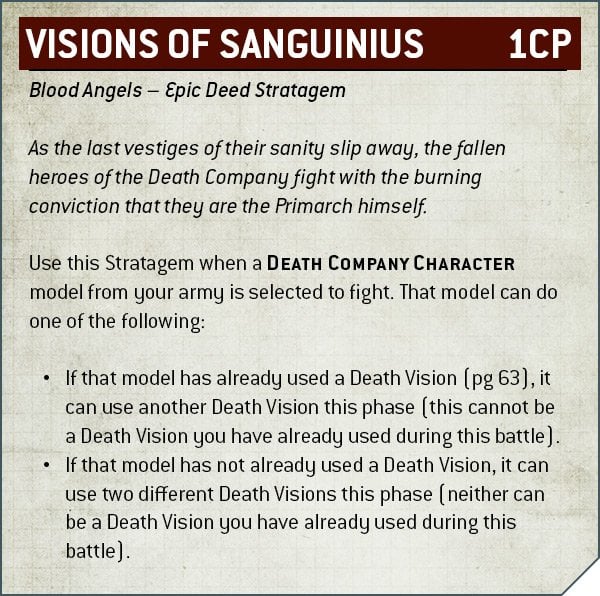 Keep in mind what makes this stratagem a really good option is that it can apply to unique characters like Chaplain Lemartes or Tycho the Lost. It’s a good one to keep in your back pocket. 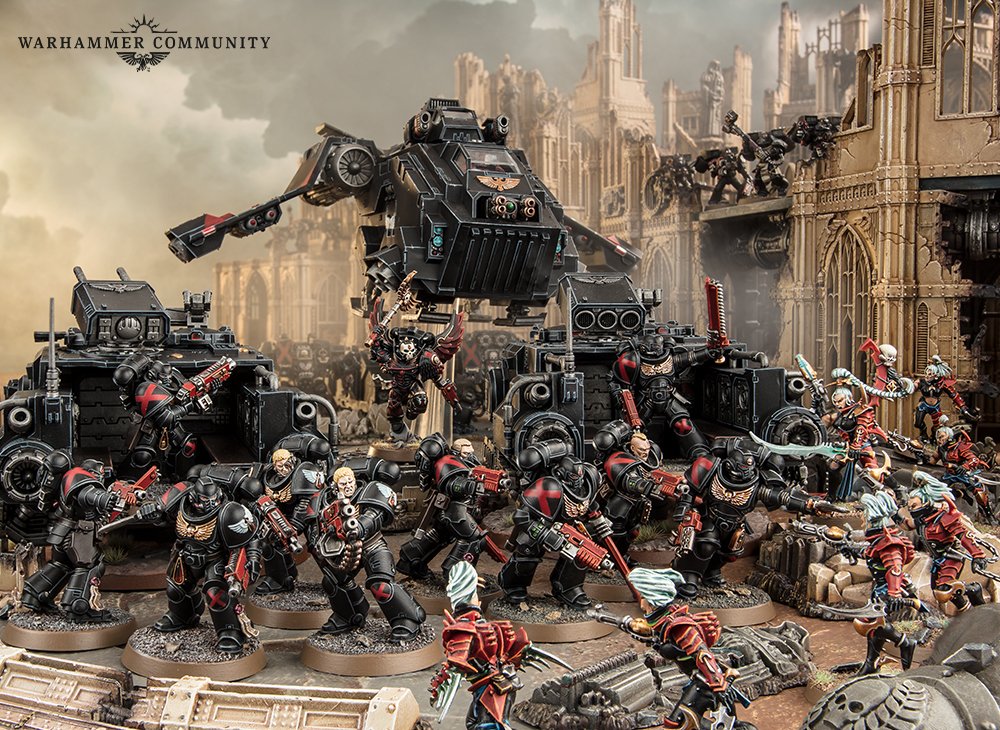 If you’ve ever wanted to run an entire Death Company army, well, you can:

“Of course, the presence of multiple Death Company HQ choices also unlocks the ability to field an entire Detachment – or even an entire army – of just Death Company units. Such a force would bode ill for the future of the sons of Sanguinius, but it would be much worse for your prospective opponents in the more immediate term! A Death Company army isn’t the most balanced force, granted, but it’s certainly one that would guarantee a swift and brutally violent game!”

Swift games aren’t a bad thing. And if it goes down brutally and violently, well, it’s not called the Grimdark for nothing! If you wanted to build an all Death Company force, you could start it by using the new Death Company rules in Crusade. Speed-up the effects of the Flaw and dive straight into the madness. 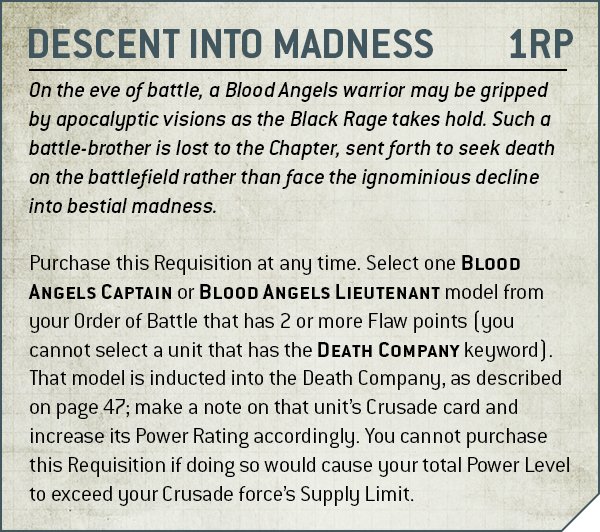 Naturally, this does make the Death Company predisposed to dying on the Battlefield in a glorious and honorable death. Good thing there is an new Agenda for that: 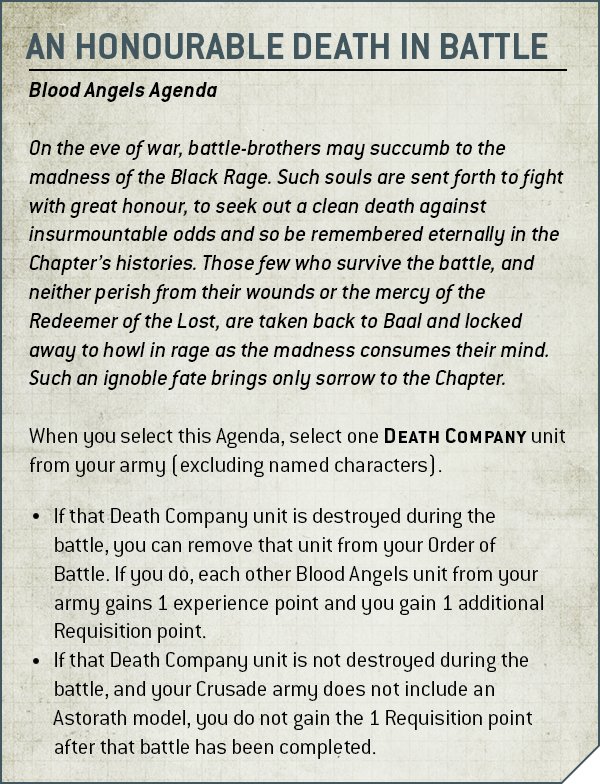 Death Company are called “Death” Company for a reason. Send them in on the missions other squads can’t handle. They aren’t planning on coming back after the battle anyhow… 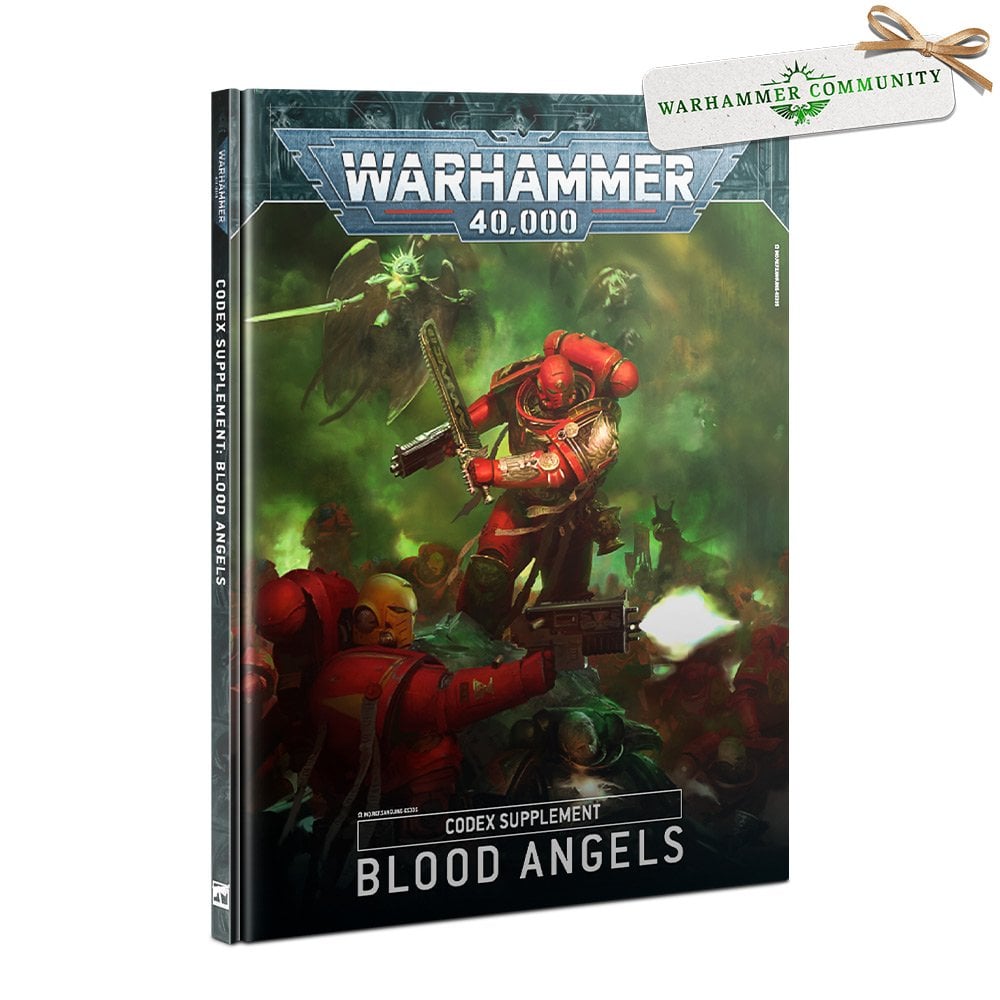 The new rules are coming soon within the new Codex Supplement. And don’t forget that there will also be a new Death Company box for your Primaris Death Company as well! 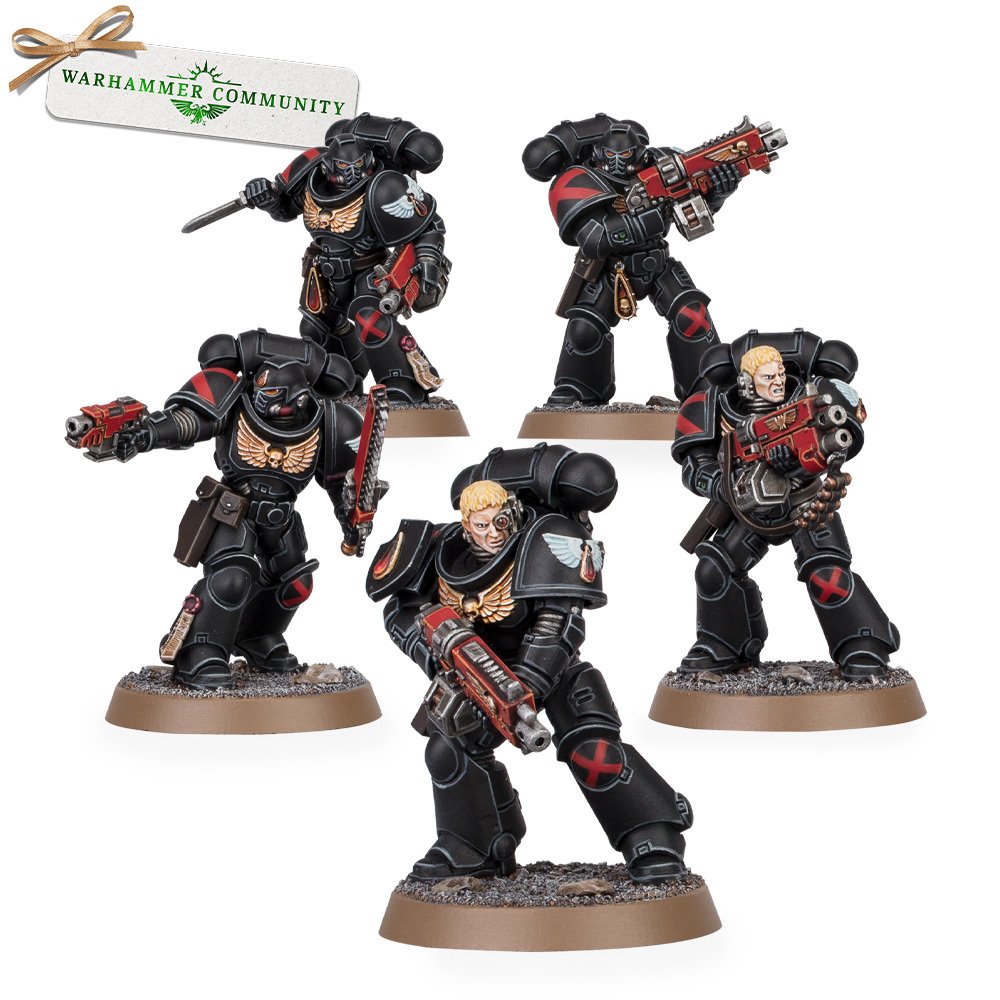 Are you ready to succumb to the Black Rage and join the Lost in the Death Company? Too bad – the flaw waits for no one! Embrace your destiny.

Author: Adam Harrison
Writer, Editor, Texas Native, and Austinite for 15+ years, Adam covers all things Tabletop Gaming. Which includes Warhammer 40,000, Age of Sigmar, D&D, Board Games and everything else that involves dice, boards, cards and a table. A hobbyist, player, and collector of miniatures and games, Adam's current obsession are his Death Armies for Age of Sigmar, his Blood Angels and Tyranids for 40k, and his ever growing Arkham Horror: The Card Game Collection.
Advertisement
Blood Angels Games Workshop Rules Warhammer 40k Warhammer 40K 9th Edition
Advertisement