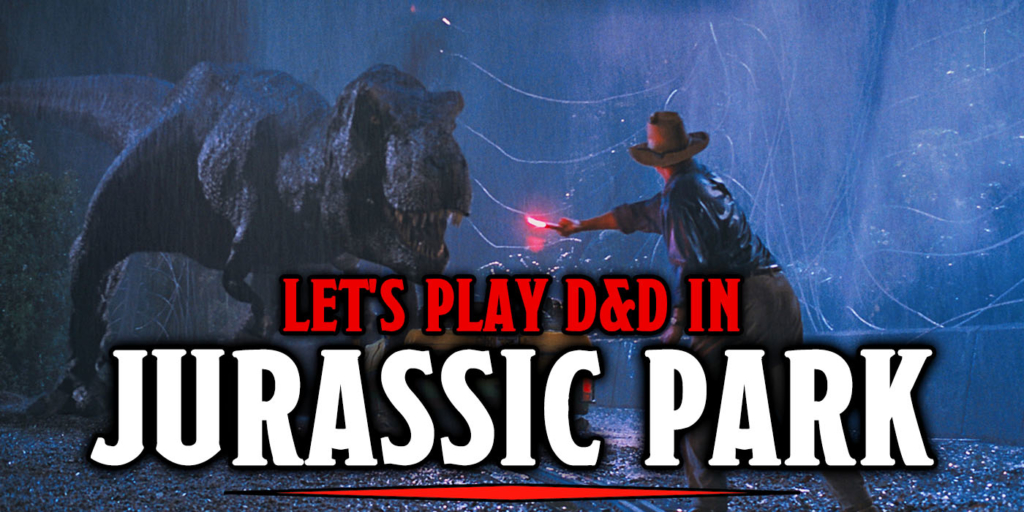 This week life finds a way as we travel to Jurassic Park to play some D&D, see some dinosaurs, and test out if T Rex vision really does rely on movement.

I love Jurassic Park. I remember when it first came out and I was just young enough that my parents resisted taking me to see it because they said I’d be afraid – in retrospect this was an excuse they used a lot when they wanted to go to the movies without kids and didn’t want to hurt my feelings – but by the time it was out on VHS it was perhaps the best thing I’d seen in my second grade life. And that little bit of 1993 is still pretty great.

So I was sure making sheets for a Jurassic Park adventure would be equally fun until I sat down to do it and realized…. the characters are sort of boring. Not to watch, of course, and they wouldn’t be dull to play, but making a mid-level Rogue-Scout Alan Grant doesn’t sound like an exciting sheet for you guys to look at. And dinosaurs already exist within the published pages of D&D so what’s left? The mastermind of Jurassic Park and final boss of the island, John Hammond. 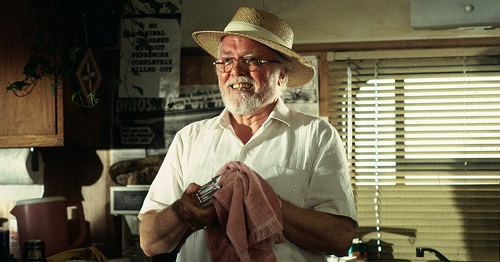 If you’ve only seen the movie, you’re probably confused. Hammond seems like a nice guy who wants to make a fun park and impress his grandkids, but that’s what makes him so insidious. His novel counterpart is temperamental, selfish and doesn’t care too much if his grandchildren are eaten by dinosaurs. He’s not as much a mastermind as a very deep pocket with sentience, but for the sake of this Jurassic Park inspired D&D game, let’s assume he’s an evil genius featured NPC who seems like he’s helping the party until the very end.

Sheet made using The Homebrewery.

We played a little fast and loose with this one, but I think the outcome is a final boss that would be fun and weird and a little challenging because of his ability to bring new enemies into the fight and continue tricking party members into believing and protecting him. He’s not particularly strong and doesn’t have a ton of HP because at the end of the day he’s a senior human. The one change I’m considering would be a multi-attack to balance out the physical weakness and allow him to call in or create more friends per round, but this may also be just right for a lower level adventure.

Could I have made Chris Pratt’s Ranger-Beast Master Owen Grady with raptor companions? Sure, of course, but I already committed to classic Jurassic Park, so he’ll have to wait for another day.

Would you play a Jurassic Park inspired D&D session? How would you set that game up as the DM or which kind of character would you make as a player? What movies or TV shows would you like to see me tackle next? Let us know in the comments!