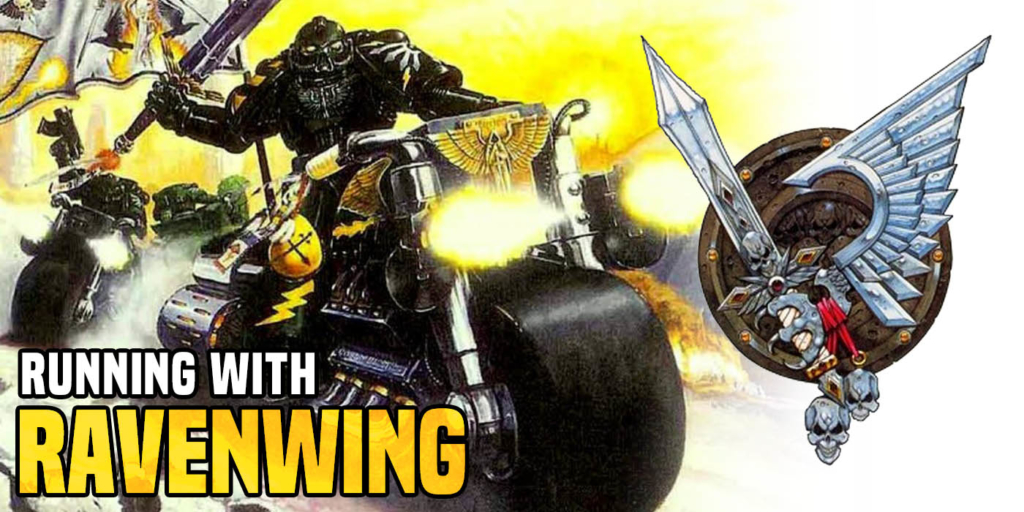 Today we look at the advantages and disadvantages of an all Ravenwing army in 9th Edition.

Since the release of 9th edition, I’ve been considering dusting off my all-Ravenwing army. The army has a lot of potential with the new Space Marine codex and the extra CP afforded by the change to the way armies are built. This article is going to look at the advantages and disadvantages of the army. When I talk about an all-Ravenwing army, I mean those units listed in the Dark Angels Index Astartes, as well as those from the main Space Marine codex that can gain the Ravenwing keyword. 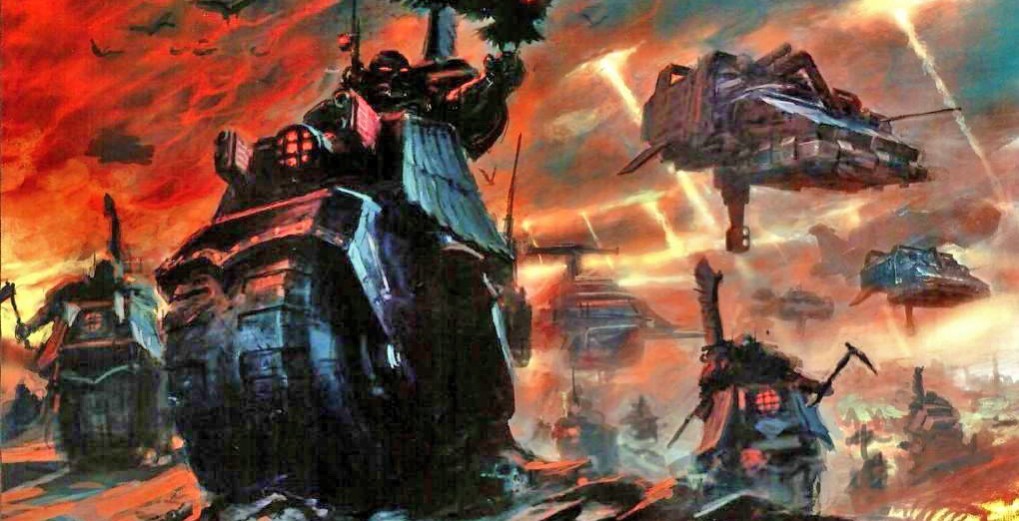 The army is likely to be highly mobile in nature. Given that the majority of the force will be made up of Bike Squads and Landspeeders, the Ravenwing will have no problem getting around the table. The fixed advance rolls mean that the army will also be fairly predictable in its movements, giving you the ability to accurately advance onto objectives or table quarters, without the risk of a poor advance roll. They also have access to a number of stratagems to boost their mobility and ensure they can keep up their firepower during the game. There are few armies that will be able to keep up with the Ravenwing in a game.

The extra wound that Bikers receive in the new codex should help with the durability of the army, making them more viable as a force. With T5, three wounds, and a 3+ save on most Biker units, the army should have some reasonable durability against small arms fire. Those units with access to the Jink save will have boosted durability against enemy firepower thanks to their invulnerable saves. This should make it more annoying to deal with the Bikers and skimmers, as you can shrug off a third to a half of the firepower leveled at selected units. The humble Landspeeder is also a pretty tough customer to take out. With T6, six wounds and a 3+ save, it will take some dedicated firepower to take down a Land Speeder. At only 60 pts base, it is pretty cheap to run a number of models in a squad, with some decent firepower output as well (especially with the new and improved Heavy Bolters).

The Ravenwing army has access to an abundance of Assault Cannons and Heavy Bolters. Mounted on highly mobile platforms, you should be able to get the firepower anywhere you need it, moving into optimal position each turn. The mass of Bolter fire from the Bikers will also give you good options on taking out infantry. In terms of anti-tank firepower, you have access to the Multi-melta on Attack Bikes, Landspeeders, and the amazing Invader ATV. The extra shot gives you more firepower, and the high mobility of these units allows you to easily get into half range for the additional damage shots. You also get access to the new Storm Speeders, giving you a new range of anti-tank firepower for your army. This should give you the option to take on a range of enemy threats that you should face. 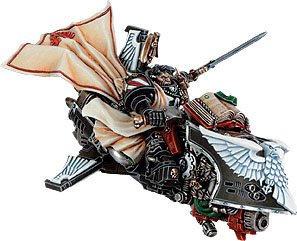 Ravenwing have access to some of the best characters available for the Space Marines.

First off, Sammael is a solid choice for leading your army. He comes with some strong firepower in the Master-crafted Plasma Cannon, and has very strong combat ability, especially on the charge. He also buffs the army, with re-rolls of 1’s to hit and the Chapter Master ability for Ravenwing Core and Character units.

The Talonmaster is an incredible support character for the army, and has gotten even better with the new rules. He has gone up to BS2+ and no longer suffers a penalty for moving and shooting. With a Twin Assault Cannon and Twin Heavy Bolter, he has some seriously accurate firepower on the move, as well as the ability to ignore the save bonus of cover on a selected enemy unit, as well as Lieutenant re-rolls. An 18″ move and Fly also means he is highly mobile, able to get wherever he needs each turn.

The Ravenwing Apothecary is possibly the best Apothecary model in any army. As the normal Apothecary can no longer take a Bike or Jump Pack, he is possibly the most mobile option available. He is able to keep up with the rest of the army and provides some very powerful buffs, as well as the ability to revive slain Bikers.

One downside of the army is that you may struggle to shield your characters from the enemy firepower. Odds are, you are probably running Bike squads in units of 5 or fewer. A few casualties from the squad will mean that they can no longer screen for your characters. You can shield them with the speeders, but they do not benefit from the various buffs that the characters can provide, as they are not core units.

The army will generally start with more command points than in previous editions of the game. In 8th edition, it was hard to get more than 5CP due to the detachments you could select for the army. The change to the way armies are built means that you will start with more CP for an all-Ravenwing army. The downside is that an Outrider detachment does not recover CP for having your warlord in it, so it will cost 3CP to have a Ravenwing army, starting you with 9 in most armies. After a couple of warlord traits and relic upgrades, you might start with even fewer. Gaining CP each turn will also help with the initial increase, allowing you to use more key stratagems as the game goes on.

There are a number of disadvantages to running an all-Ravenwing force.

Many of the missions boil down to grabbing objectives around the table. The Ravenwing have the mobility to get to the objectives but may lack the bodies to hold them once they are there. Also, the lack of Objective Secured can be a big disadvantage to scoring, but there are a few ways to mitigate this.

Another drawback of the army is the choice of secondary objectives. With no infantry models in the force, this shuts down the choice of any of the shadow operations secondary objectives. In addition, the lack of a Biker Librarian limits the Warpcraft objectives that can be taken, other than Abhor the Witch. This means you are going to be more limited in your choice of objectives, which may not be the most tactically flexible in all cases. However, some objectives such as Linebreaker and Engage in all Fronts will be readily achievable for your fast-moving force.

On the other side, the army should not give up too many secondary objectives. Bring it Down will be one to look out for, especially if you are running a lot of Landspeeders or other vehicles. Grind them down and Think their ranks will also be more difficult to score against the Ravenwing. If you don’t want to go pure Ravenwing, a unit of Deathwing Terminators or Deathwing Knights synergize well with the Ravenwing, as well as providing a highly durable unit for grabbing objectives and taking out enemy units.

Depending on your board set up, the army may struggle to get around. Any Bikers will not be able to pass through ruins or go up the levels of ruins. The changes to engagement range mean that you are able to attack squads on upper levels of ruins, but there is a limit to this if you are playing on tall ruins. Landspeeders and other skimmers will be able to get around the board more readily and up on buildings, but their combat ability is more limited for clearing units off of objectives.

The army is also likely to be not very numerous, thanks to the number of Biker and speeder units. This could have consequences for holding objectives, or for board control, especially against horde armies.

The more I think about it, the more viable the Ravenwing army could be in 9th edition. However, there are several drawbacks to the force, some of which are highlighted above. Getting some actual gameplay in would be nice to see if it is feasible to run the list. 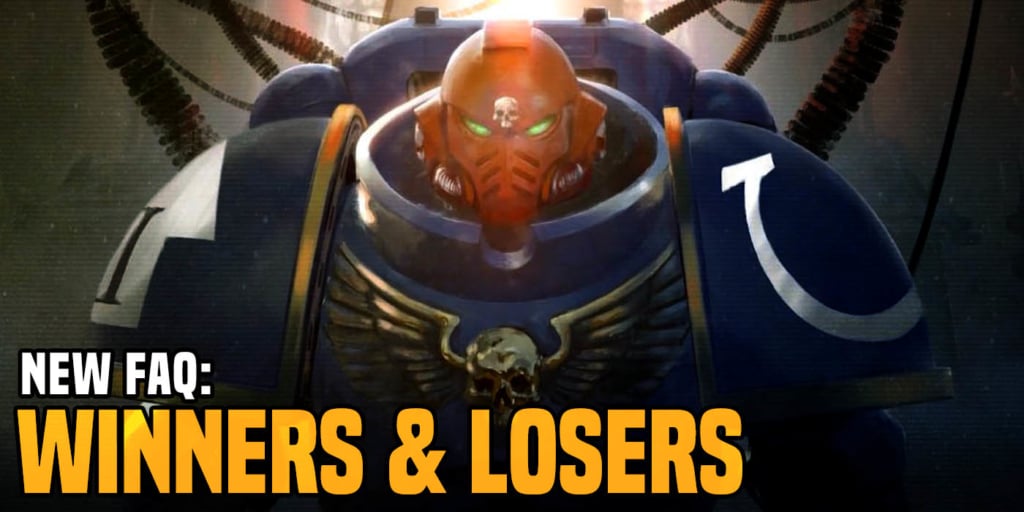