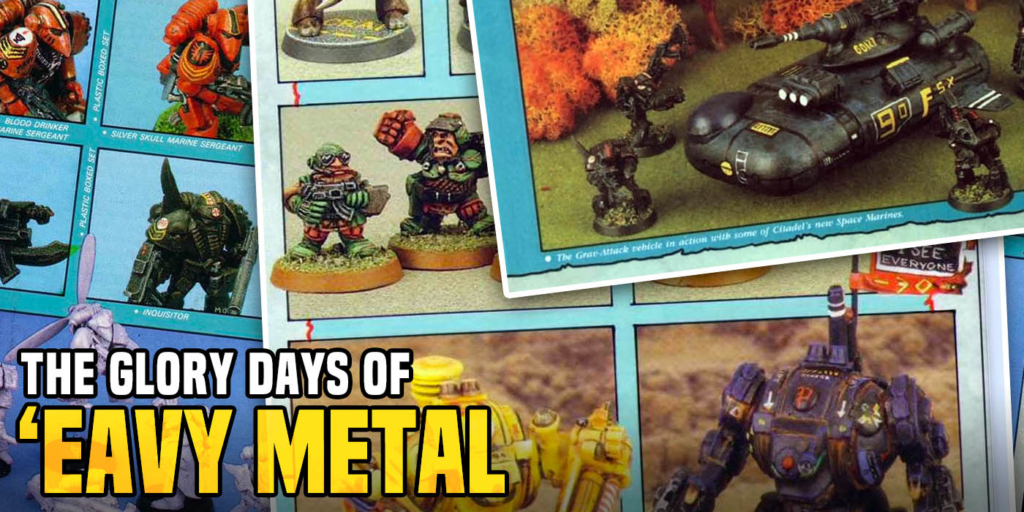 Today look back through ‘Eavy Metal that inspired gamers decades ago, during the birth of Warhammer 40,000. See what the pros painted and converted when the Grimdark was an infant. 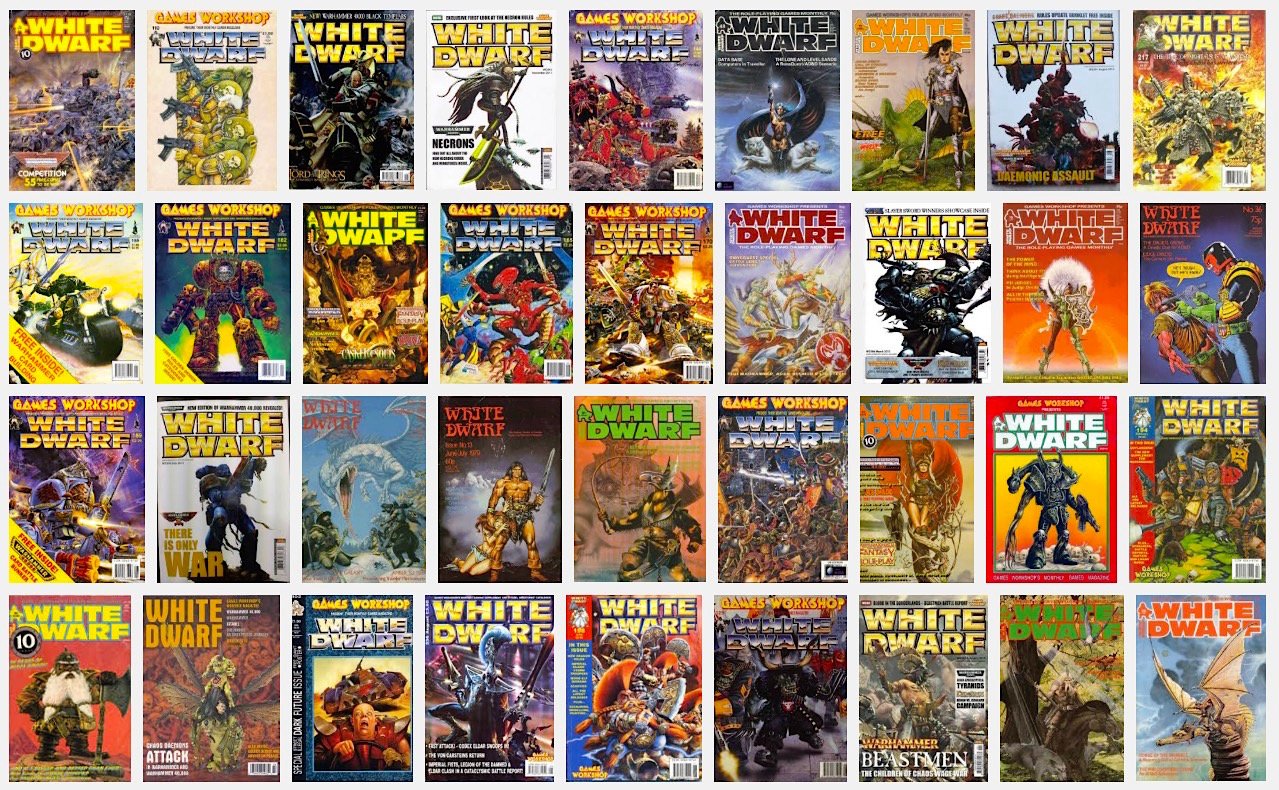 If there is one thing that gets a hobbyist’s blood pumping – it’s flipping through White Dwarf to see the ‘Eavy Metal section. Lovingly set up and photographed, with the best-painted  minis – it only takes a few seconds to capture a gamer’s heart, fire of some inspiration, and get that next collection started. Back in September 1987 GW launched Warhammer 40,000 rogue Trader and the world of tabletop wargaming would never be the same. Today over three decades later we go back and remember what Games Workshop’s ‘Eavy Metal team was up to in those first six months. 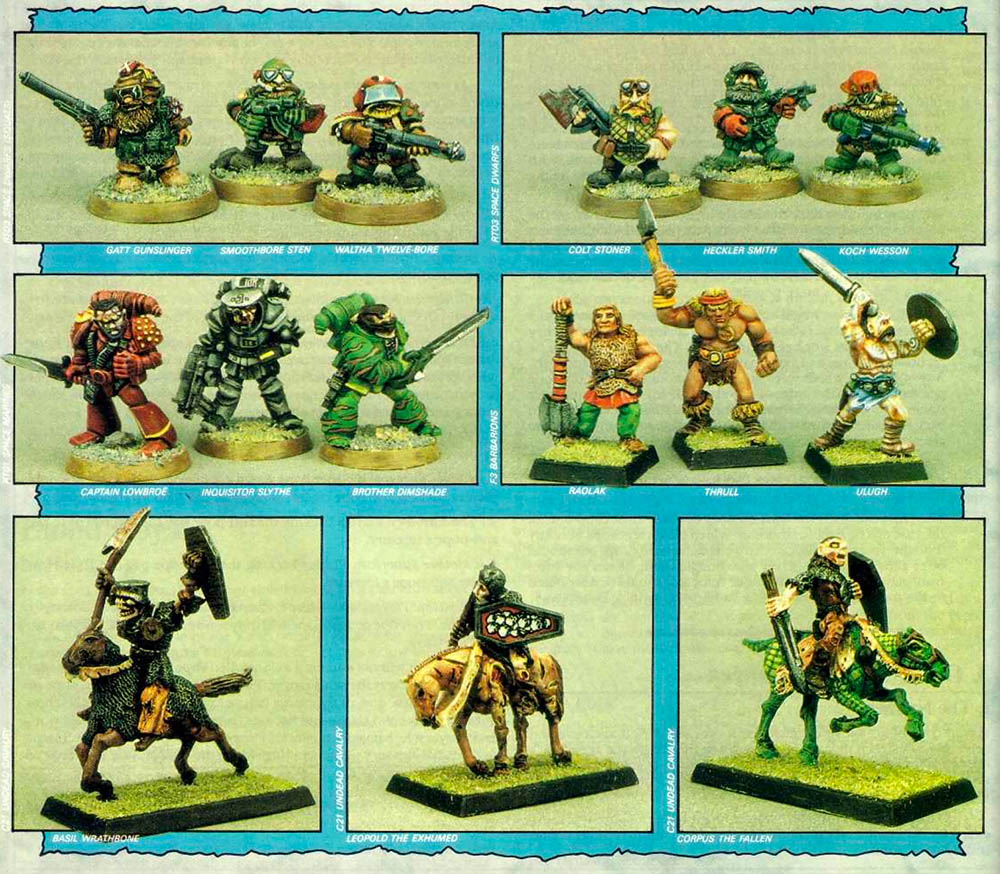 Rogue Trader was launched this month and you can see the classic plastic RTB-01s up there in all their glory. Note not only the Squats and more Marines below, but Elric, back when GW still made miniatures for that universe. I can tell you that Middle-School me decided to paint up my original Blood Angel army based on that command squad up there. I was smitten! 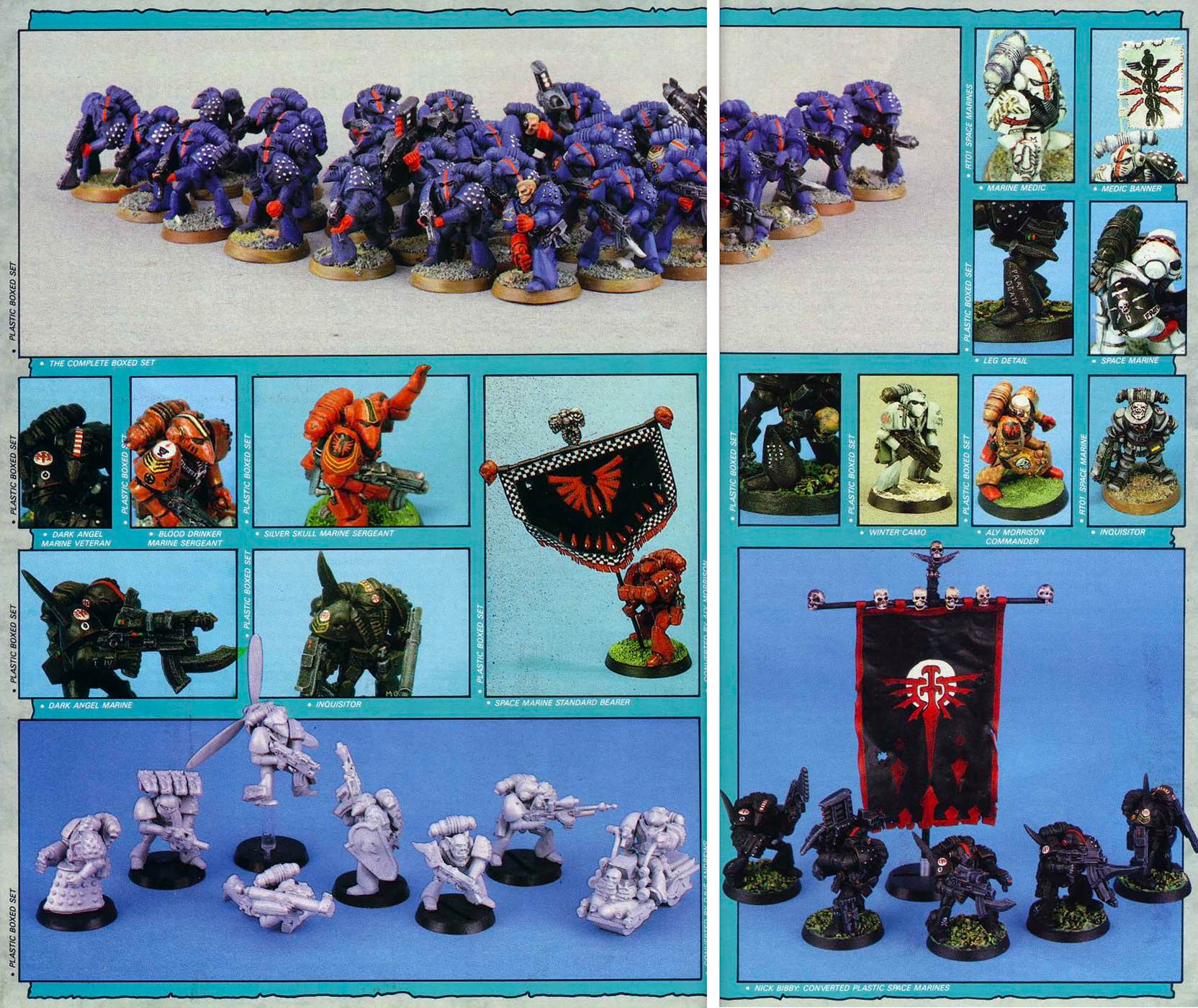 Month two of 40K’s launch and it is pure creativity on the part of the ‘Eavy Metal team. A lot of these feel more Mad Max / Road Warrior, that what Marines would evolve into later. But at this point it was just about kitbashing and having fun with the RTB-01 kit. Special callout to the propeller-pack marine and the half-marine half-Dalek dude.  Note the sinister nature of the Dark Angels on the bottom right, so early in the game’s history. 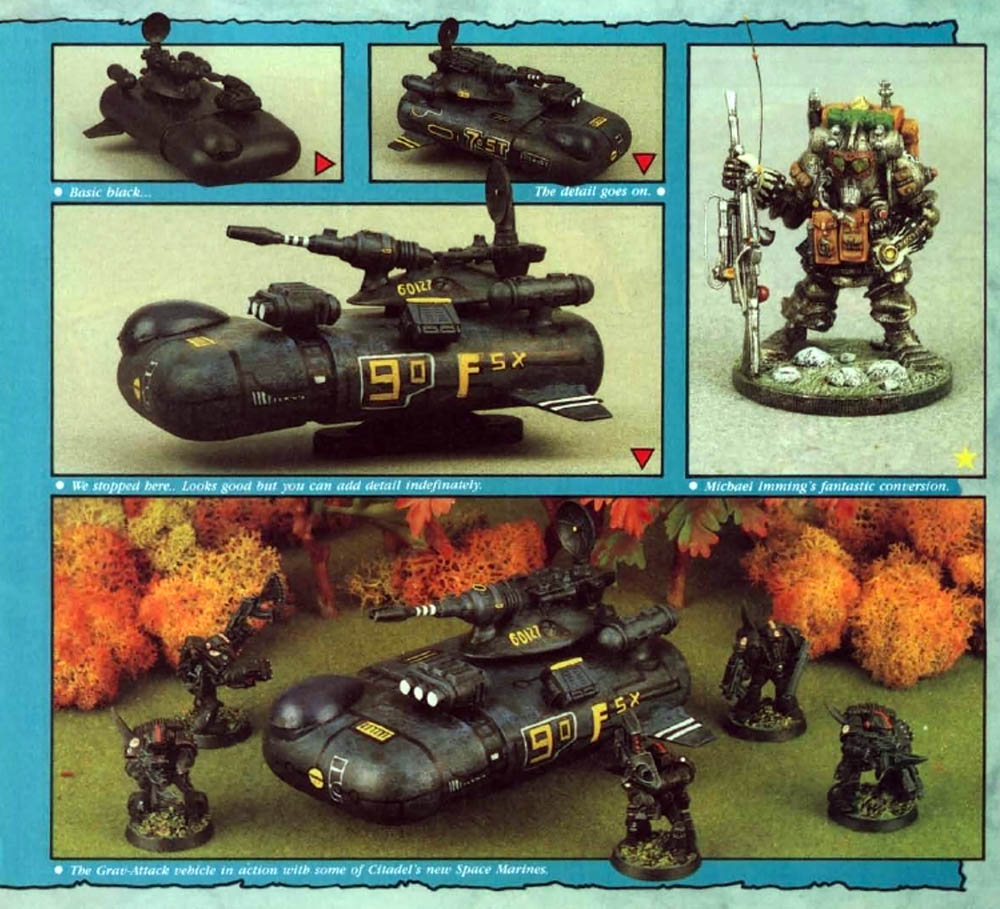 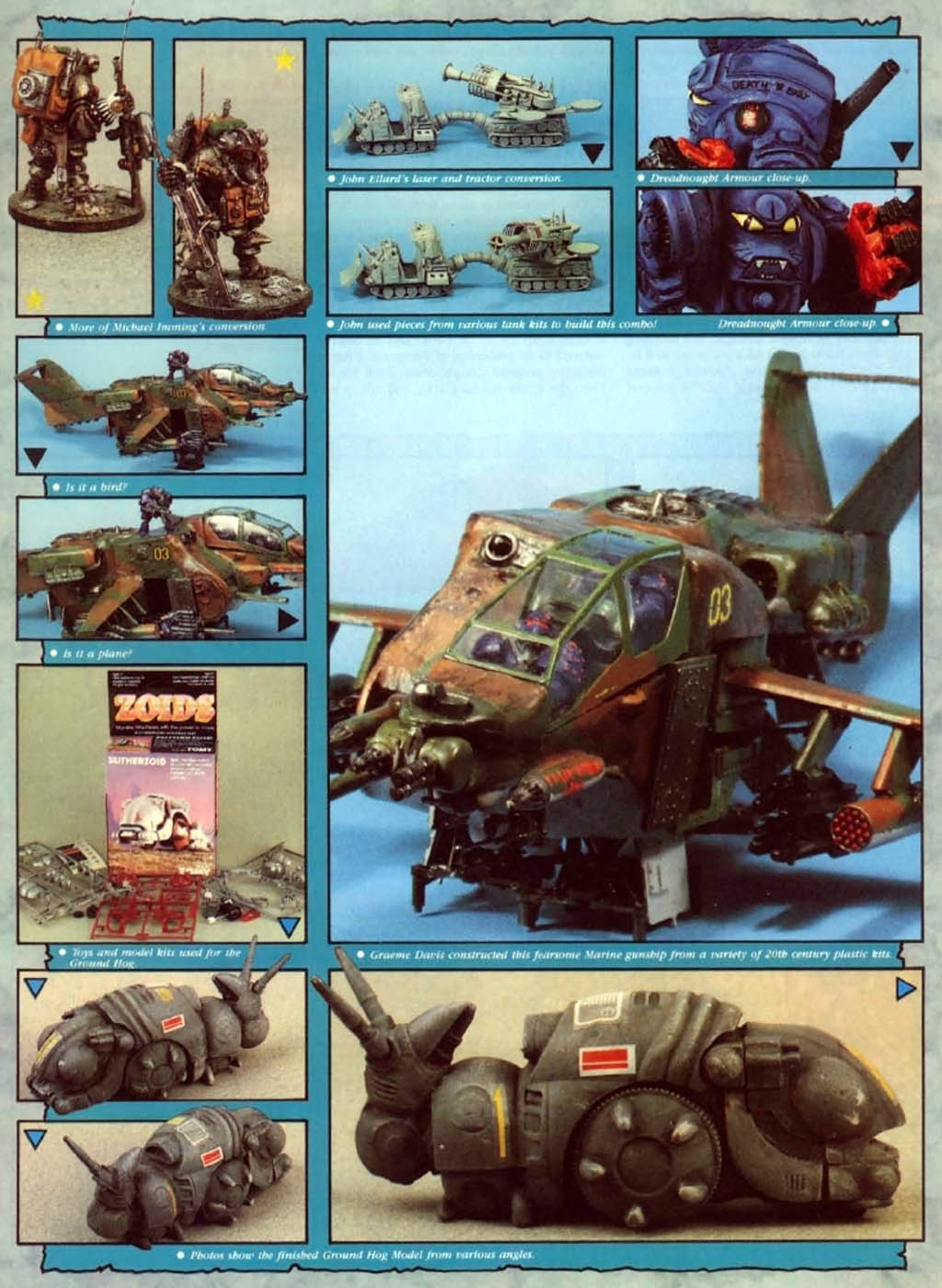 Month three and it’s all vehicle conversions all the time. 40K launched with no real rules for vehicles, which would follow on quickly in White Dwarf. The metal Marine Dreadnoughts came along first seen up there in blue. But the “anything-does” vibe is full force. We have the seminal deodorant speeder (which inspired an homage by Forge World decades later), what could be the primogenitor to an Adeptus Mecnaicus Ordinatus, and a Marine Apache helicopter kit based flyer. I like to think of the Zoid as the great grandfather of the Termite. 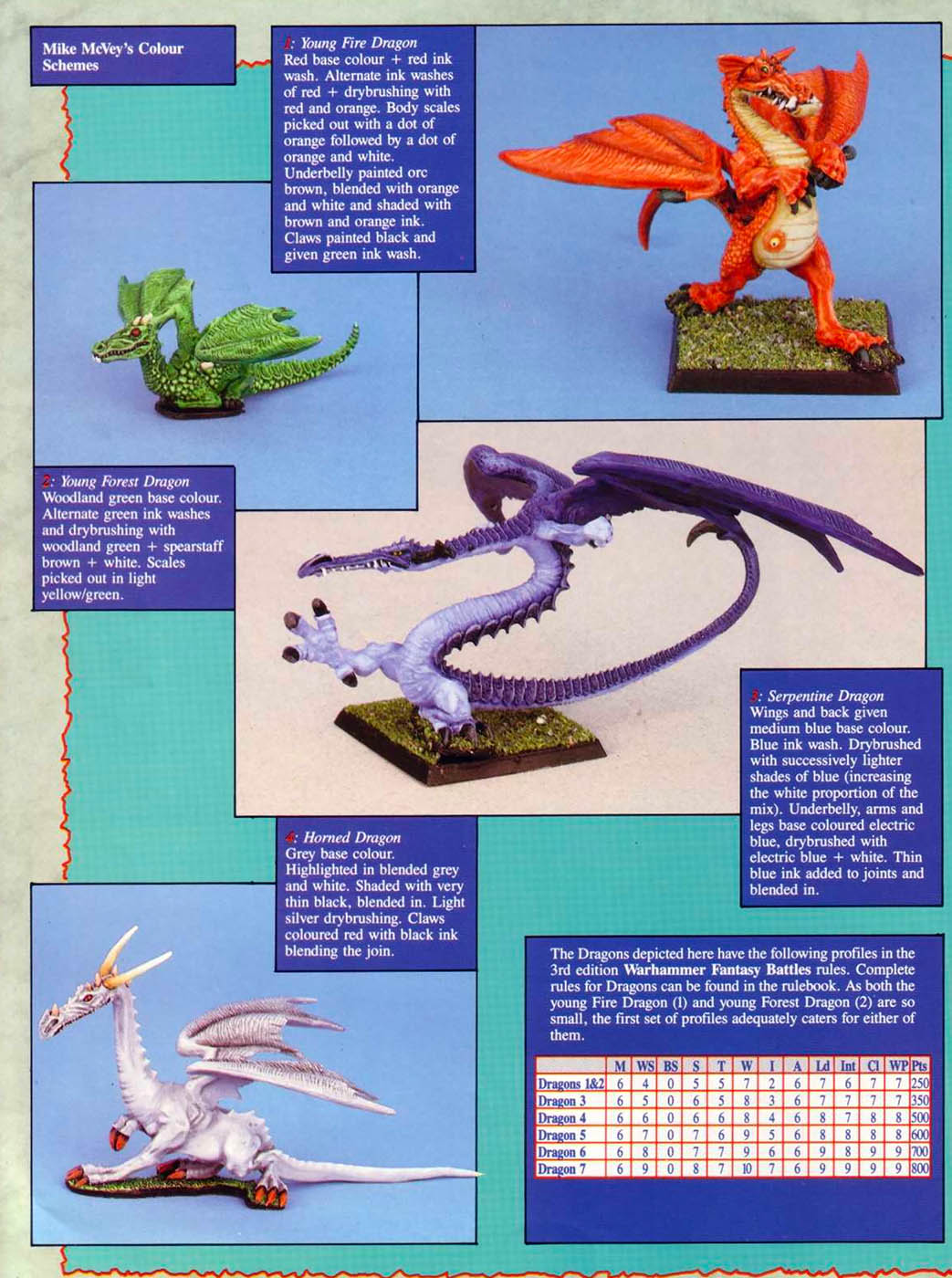 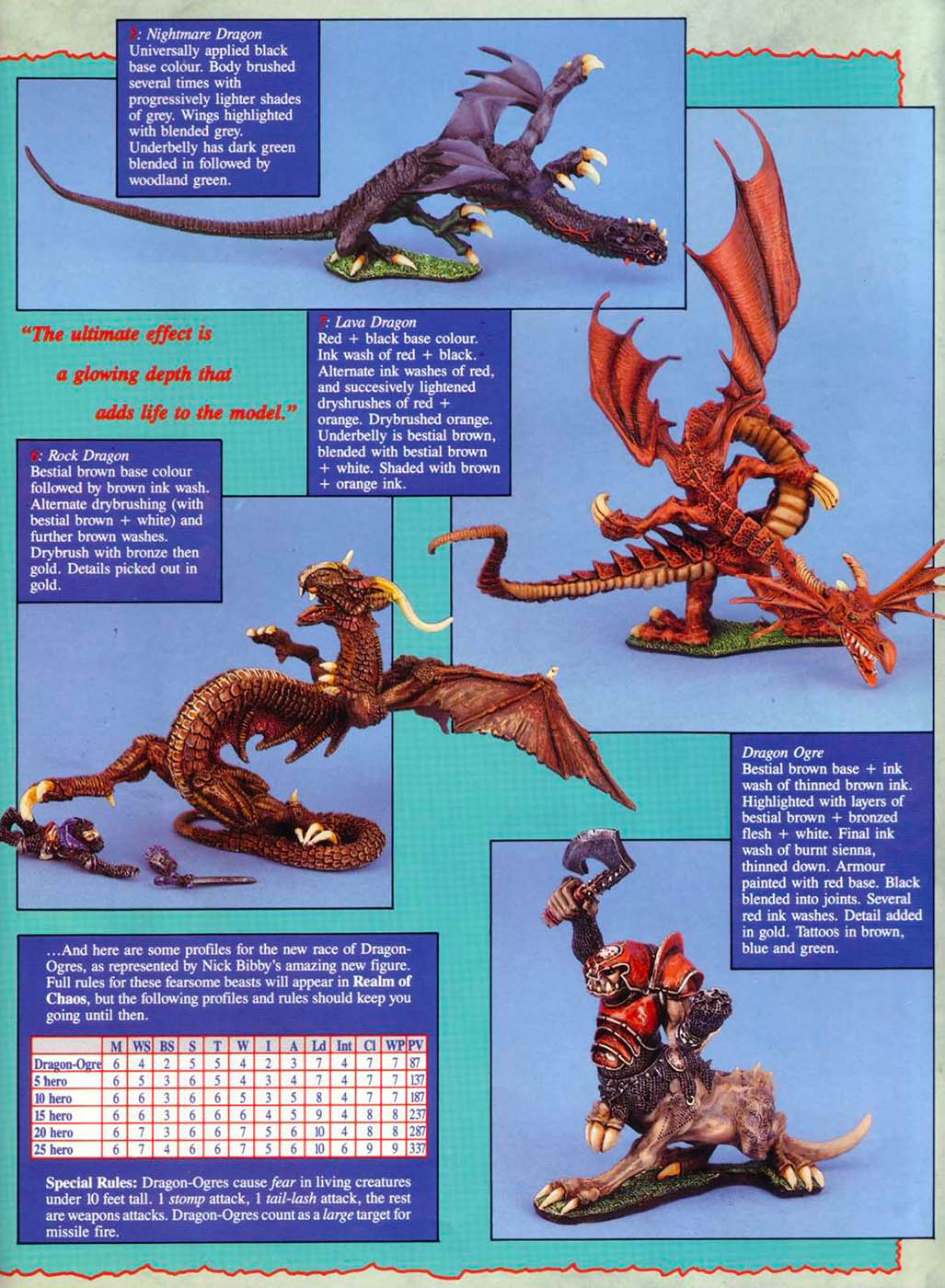 Games Workshop couldn’t forget about Warhammer Fantasy and December 1987 gave us a focus on the slinky, hinky dragons that are distinctively GW. Sculpted by Tom Meier, Nick Bibby, and Trish Morrison this hyper twisty serpentine look became a hallmark and is still visible in GW’s Dragon range to this day.   These beasties were causing all kinds of trouble in both Warhammer Fantasy and Fantasy Roleplay at the time. 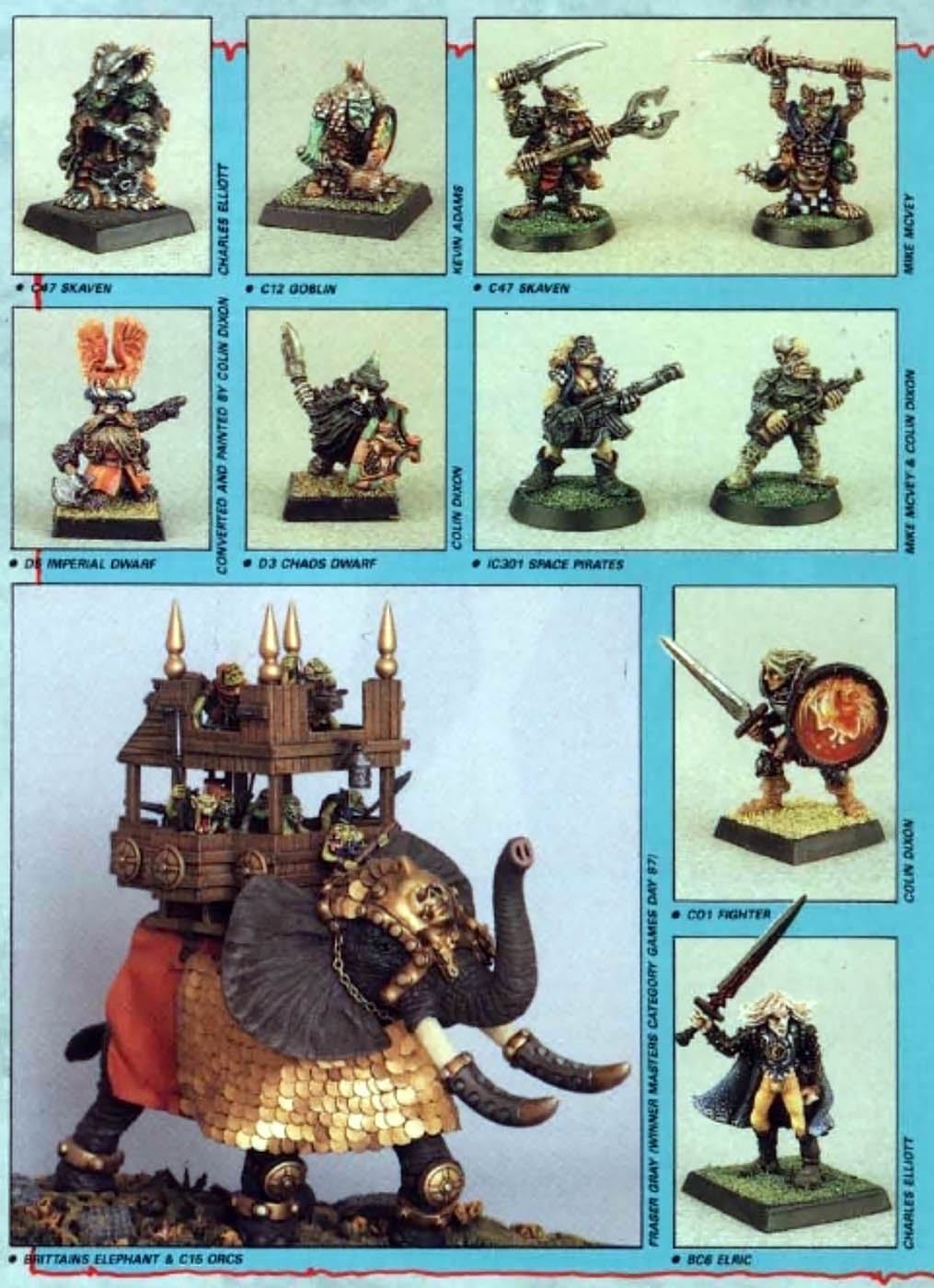 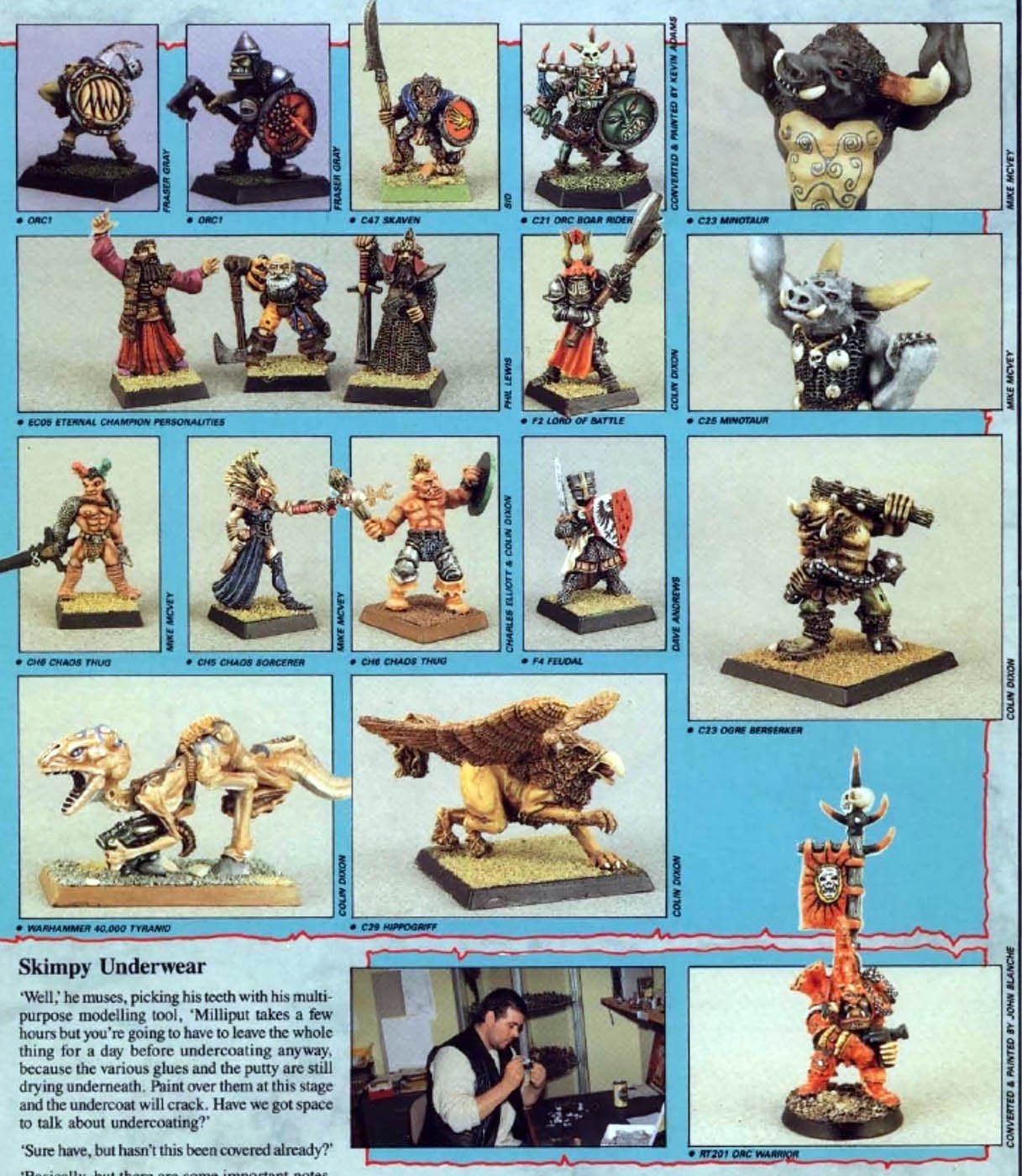 Back to the Old World at the start of 1988. We see all kinds of hero and character models from a variety of models from Dwarfs, to Skaven, to Orks on elephants (pre squiggoths) and Humans. Elric makes another appearance and for your one key bit of Warhammer 40,000 – that on the lower left is the original Tyranid miniature. The entire race and miniatures range descended from that little guy. 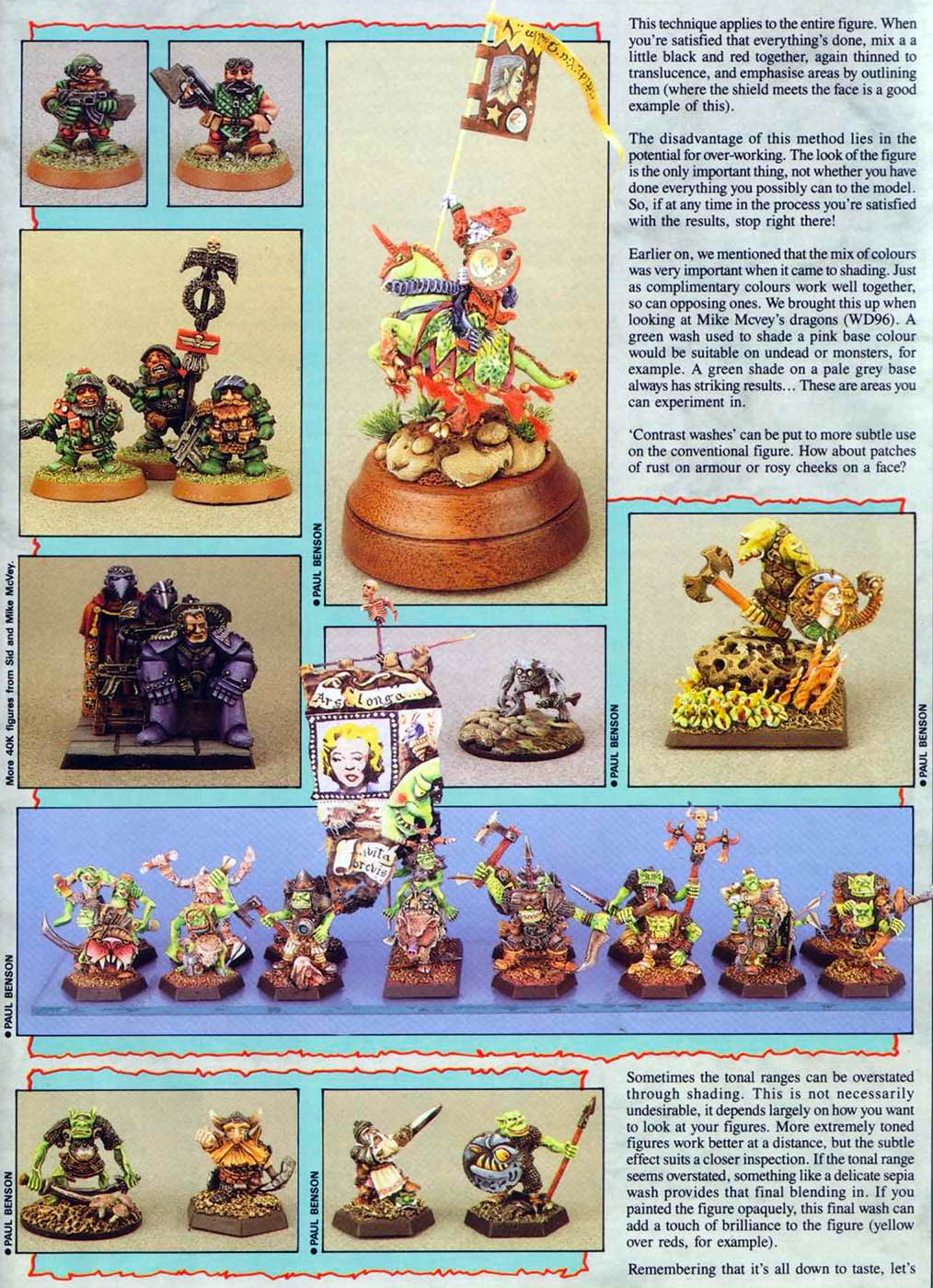 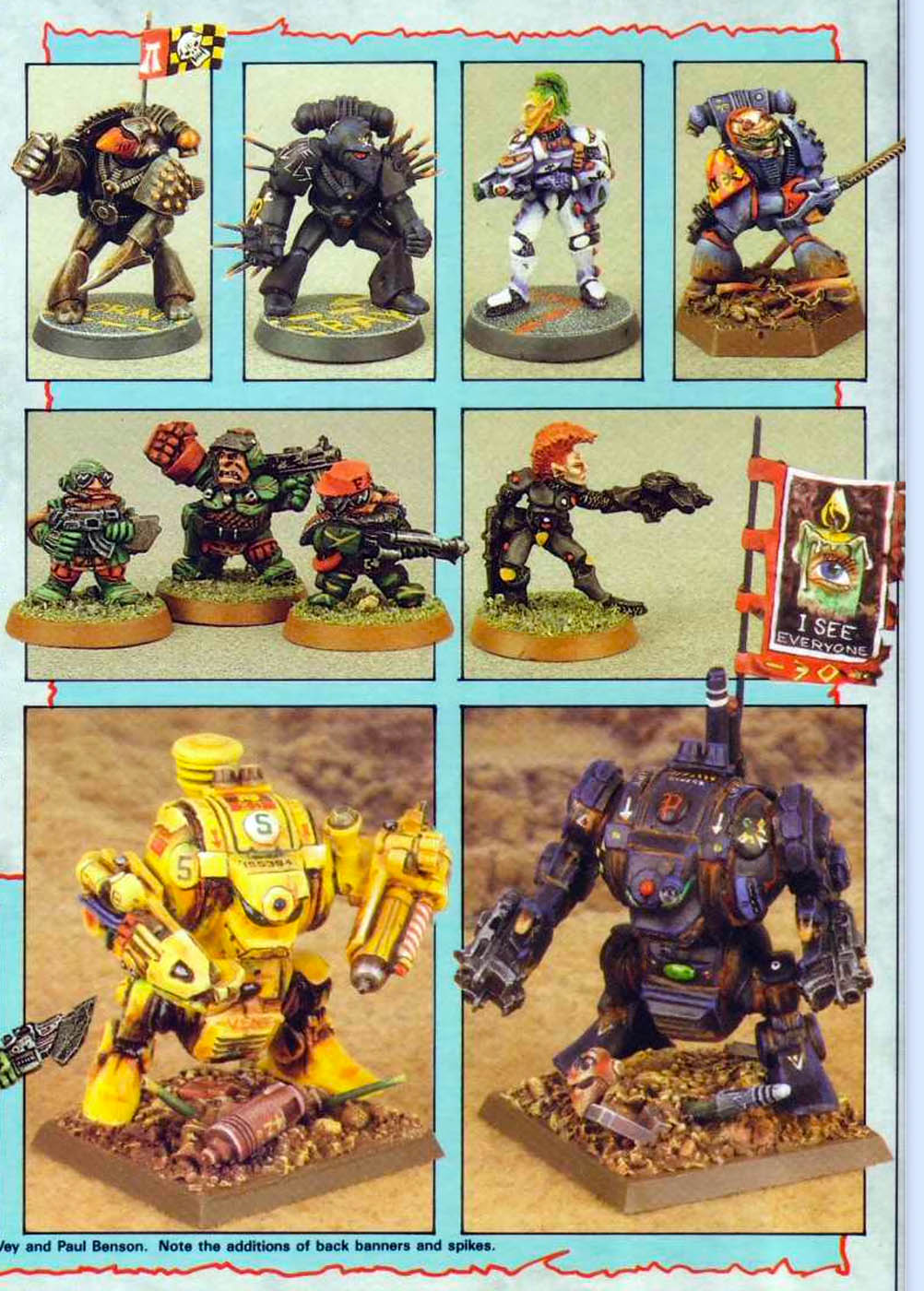 Six months since launch and the ‘Eavy Metal team returns to the Grimdark in force. Now we get multiple dreadnoughts, Eldar (long before Aspect Warriors were invented), Squats, and Marneus Calgar on the (not Golden) throne. Chaos Marines didn’t exist yet, but that marine up there in black with spikes all over him has the right idea! Also special callout to one of Warhammer’s unremembered races – the Fimir warrior on the upper right.

~How many of you played back in the day? What most impressed and surprised you from these spreads?

Warhammer Previews: The Dead & The Divine This Weekend 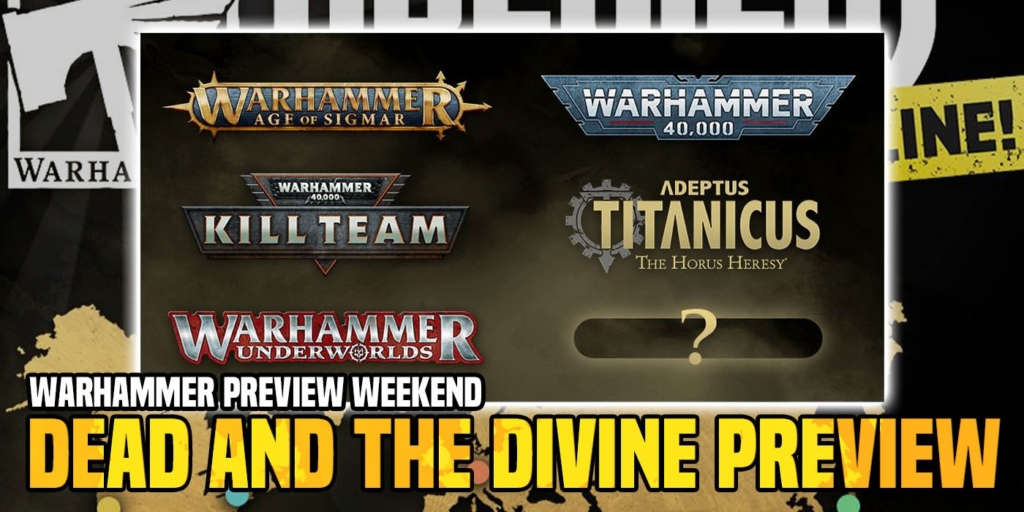