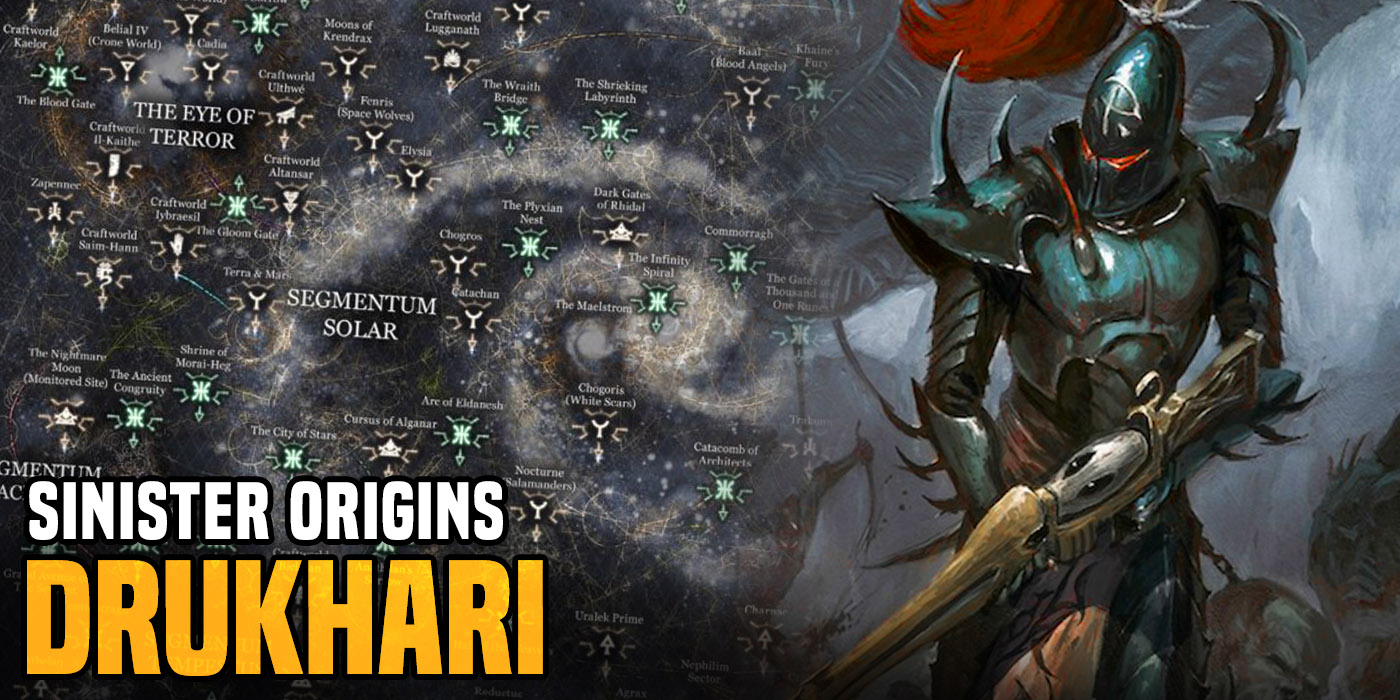 Raider, Pirates, Mercenaries – today we delve into the shrouded origins of the Drukhari!

The Dark Eldar, also known as Drukhari are kindred to the Eldar, an ancient and advanced race of elf-like humanoids. Their armies usually have the advantages of speed and technology, though they are often lacking in resilience and numbers. The Dark Eldar revel in piracy, enslavement, and torture, and are sadistic in the extreme. Dark Eldar raiding parties make use of advanced anti-gravity skimmers to launch high-speed raids on their enemy while still transporting a large number of their warriors. Due to their use of the galaxy-spanning inter-dimensional labyrinth known as the Webway, they are extremely mobile, striking from seemingly nowhere, with little or no warning, and vanishing with their captives before a significant military reaction can be mobilized. 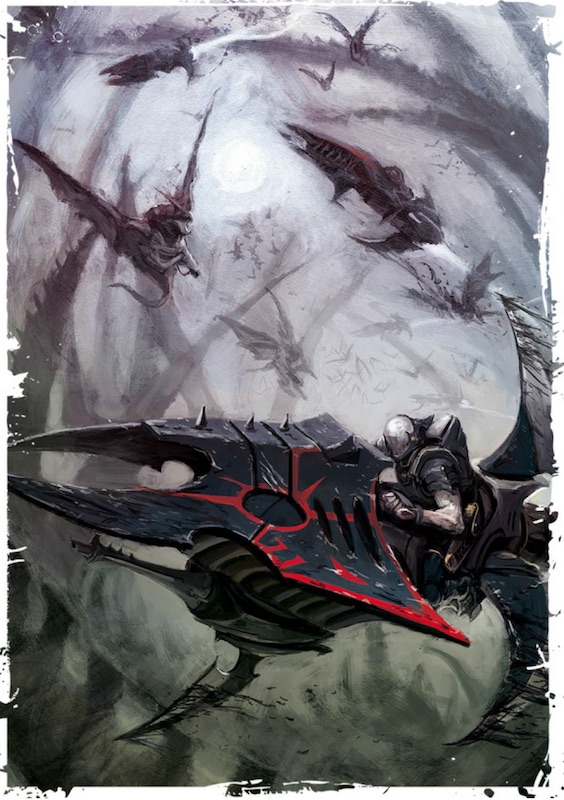 The origins of the Dark Eldar can be found in the Fall of the Eldar, the great cataclysm that nearly destroyed the entire Eldar race. It was an event so terrible that not only did it kill trillions of Eldar, but it breached the gap between real space and the Warp, and gave birth to Slaanesh, a Chaos God.

To understand the reasons for the Fall, it is necessary to know something of the Eldar mind and soul.

The Nature of the Aeldari

An Eldar’s mind is incredibly complex. Their senses are extremely sharp, able to perceive incredible levels of detail. Their emotions can be so strong that a human‘s are merely pale shadows by comparison. They are extremely intelligent; their thought processes are much faster than a human’s. All of this means that an Eldar experiences the universe and all its sensations to a greatly heightened degree. Similarly, an Eldar’s soul is much brighter in the Warp than those of “lesser” sentients. Eldar are able to affect the nether-realm much more than most other races. They are all latent psykers and have the ability to become very powerful with training. It is the strength of their souls that was one of the causes of their downfall. Before the Fall, the Eldar had an immense galaxy-spanning empire comprising millions of worlds, larger and more powerful than even the Imperium of Man at the height of its power. The Eldar lived in relative peace – barbarian races such as the Orks were kept at easily manageable numbers and never had the strength to threaten the might of the Eldar empire. The humans were not yet virulently xenophobic and did not have a large domain, and the Tyranid Hive Fleets were unknown. The C’tan and Necrons, ancient foes of the Eldar, were long ago defeated and still remained dormant. 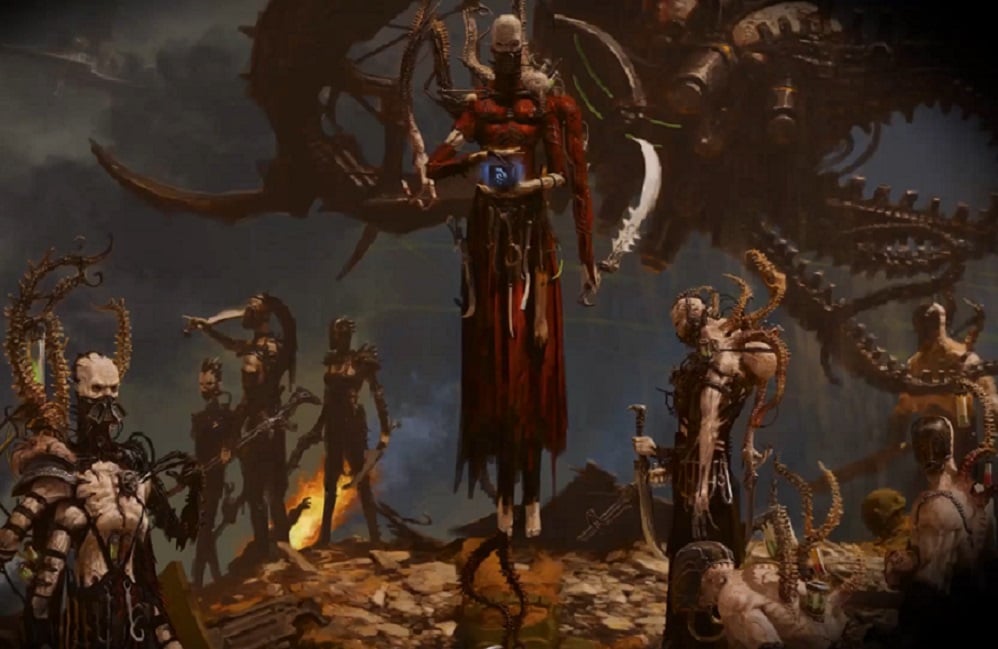 Life on the Eldar Worlds was idyllic, with fantastically sophisticated machines to take care of all labour and manufacturing required, leaving the Eldar free to indulge in other, more aesthetic pursuits. With all menial work taken care of for them, the Eldar became indolent and decadent. They began to explore more and more the arts of pleasure, delving ever deeper into hedonism. This descent into decadence spanned millennia. Tradition and order disintegrated, as they limited the pursuit of pleasure. Sects called Pleasure Cults were formed, dedicated to achieving the highest levels of hedonistic sensation, and their ceremonies and practices became ever more wild, eventually devolving into violence and sacrifice of their own kind. Some Eldar hated what their race had become and left the homeworlds for the virgin Maiden Worlds, or left on the newly-constructed Craftworlds, leaving the Pleasure Cults to their madness. During this time the Eldar had also discovered the Webway and soon mastered it to further their galaxy-spanning civilization. Building realms and outposts within the Webway to act as ports for inter-galactic travel, the city of Commorragh was founded. Isolated within the Webway, Commorragh itself soon became a bastion for pleasure cults and increasingly depraved acts.

The Birth of Terror

Meanwhile, something terrible was stirring in the Warp. The millennia of Eldar hedonism had made a massive impact in the psychic realm of Chaos. Within the warp the decadent Eldar civilization was giving shape to a Power of Chaos, which grew and grew over thousands of years, getting stronger and more defined until suddenly it sparked into an intelligence – a shatteringly huge and malign intelligence, with an immense and bottomless thirst for Eldar souls. This was the birth of Slaanesh. The process lasted for thousands of years, corresponding to mankind’s Age of Strife, although when Slaanesh finally came into being, the results with the universe were apocalyptic and sudden. An almighty psychic shockwave scythed across the galaxy. The souls of almost every Eldar were stripped from them in an instant and devoured by the new-born Chaos god. There were few survivors. Most were driven mad, their minds trapped half in the real world and half in the swirling insanity of the Warp. A great Warp rift was created, encompassing the entire Eldar empire and creating the Eye of Terror.

Rise of the Dark City

The denizens of Commorragh, however, were tucked away safely in the Webway, protected from Slaanesh and its thirst. Though much of the Webway was in ruin, they had endured and, unlike their Craftworld counterparts, remained unrepentant. Though they discovered Slaanesh was still slowly claiming their souls, the denizens of Commorragh soon discovered that by absorbing the pain and torments of another’s soul they could rejuvenate themselves and cheat death. Assuming they could feed regularly, the Eldar of the webway had become physically immune to the passage of time. Soon the Eldar of the Webway began raiding Realspace in search of captives and slaves to rejuvenate themselves with. So it was that the Dark Eldar were born, a race of sadistic murderers who feed upon the anguish of others to prevent the death of their immortal souls.

Learn more of the Drukhari 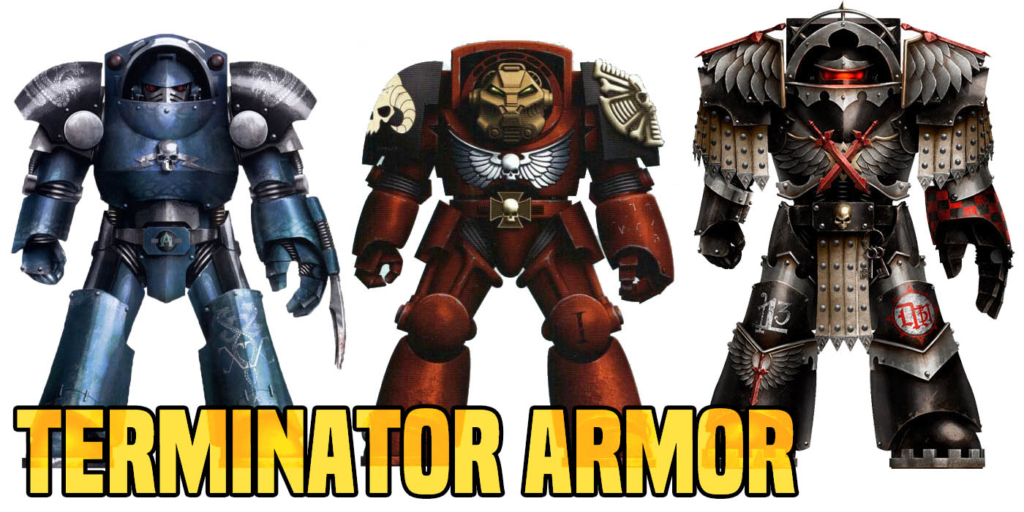