Monsterpocalypse: Cassander Is The New King In Town

The Legion of Mutates have arrived to protect Earth! We’re looking at the latest Protectors faction full of giant beasts, lead by one of the coolest looking monsters in the game to date, Cassander! 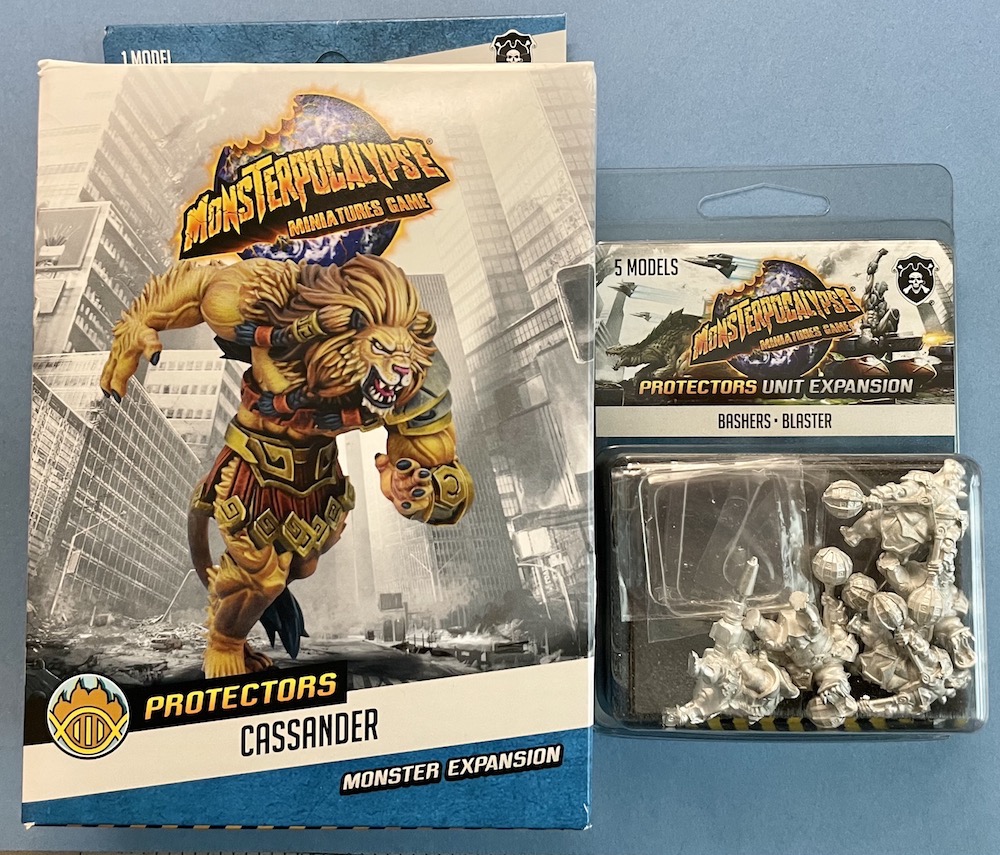 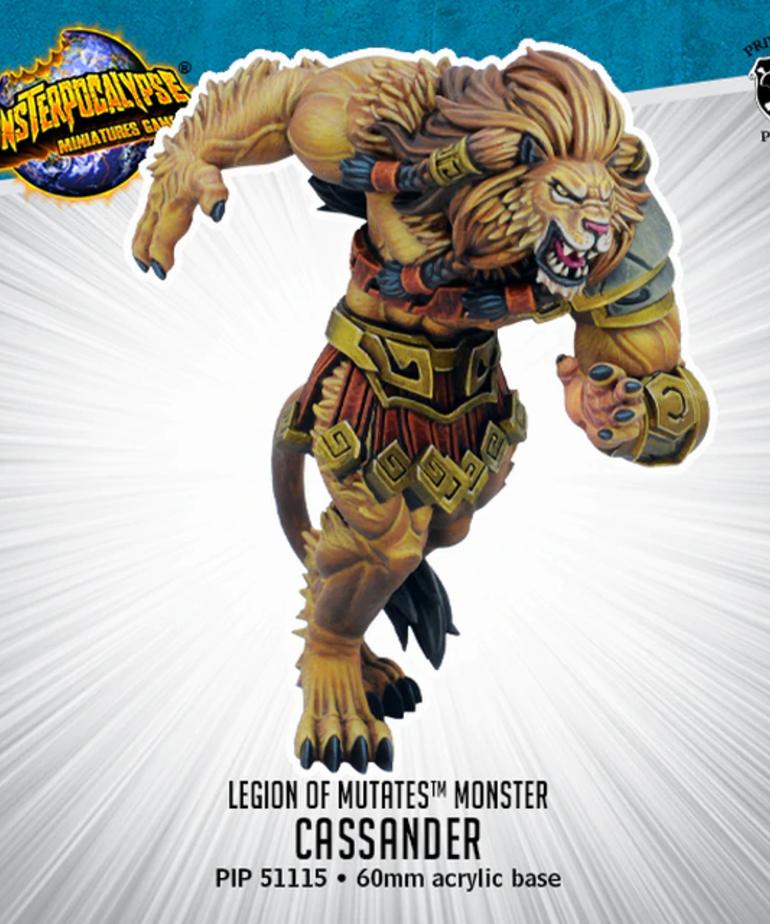 Legion of Mutates is one of my favorite looking factions in the game so far and Cassander couldn’t be a better monster to lead the release schedule for them. Cassander is a mix of metal and resin. The upper torso and most of the lower body is resin, while one leg, the arms and tail tuft is metal. 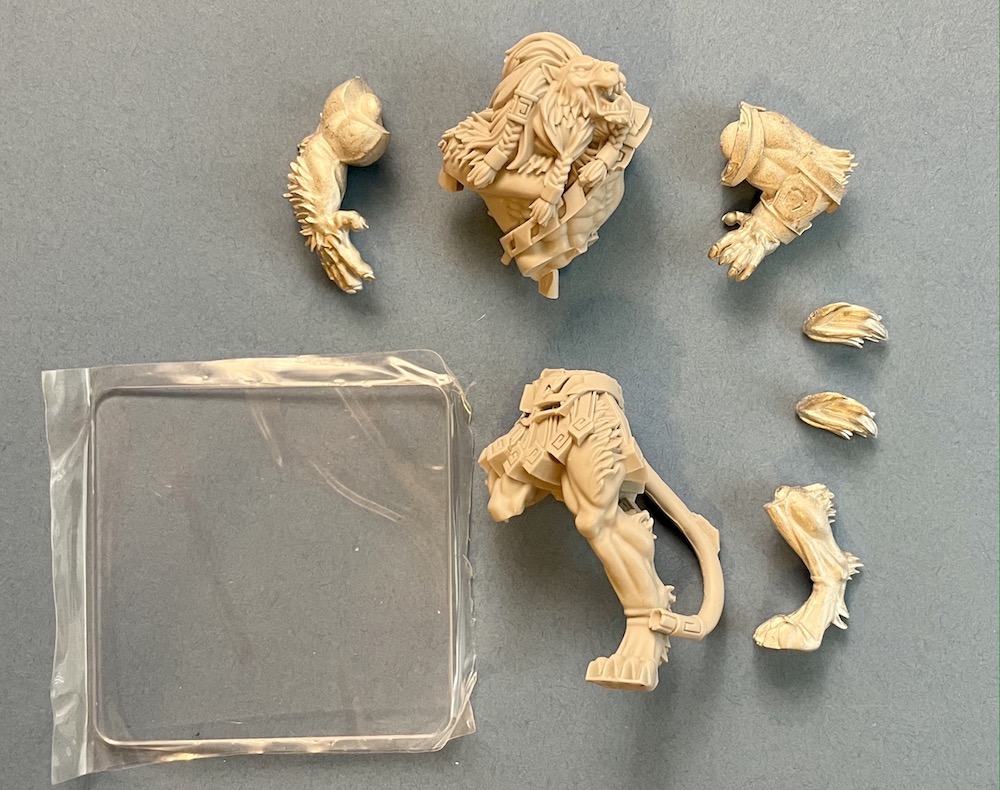 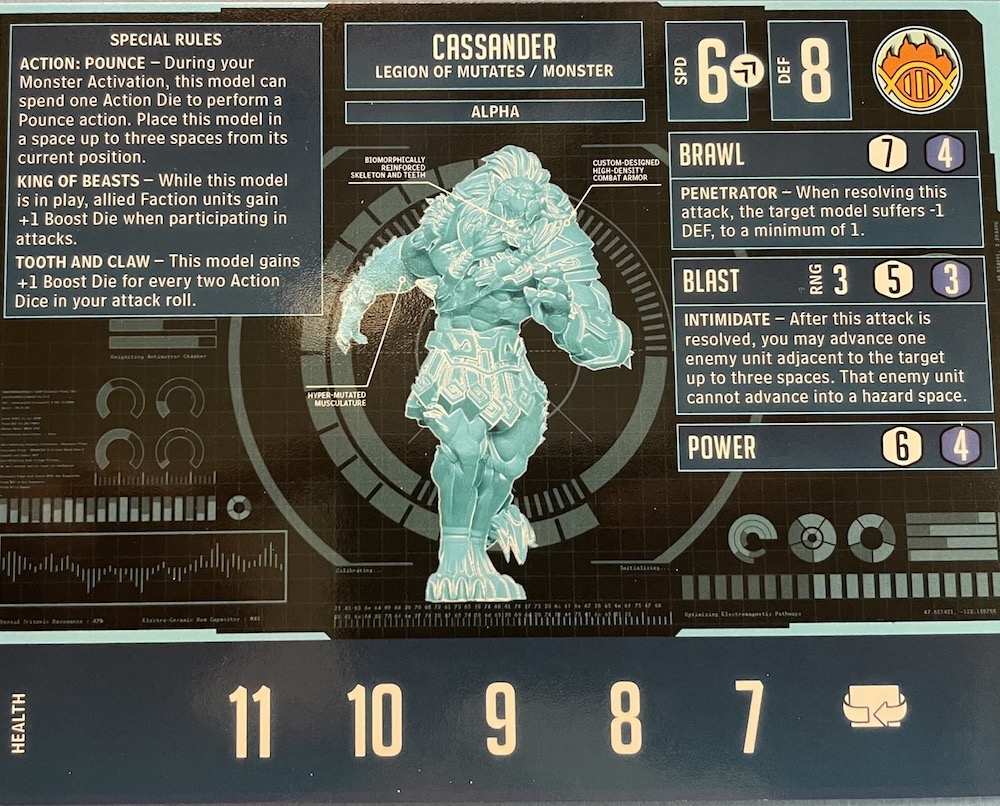 In Alpha form Cassander is showing off that lion speed. With SPD 6 + High Mobility he’ll bound through the city with ease. But the cherry on top of Cassander’s mobility is Action: Pounce. This three space place will make screening against Cassander a headache. Starting adding in any sort of SPD boosts(like an Industrial Complex) and Cassander has an huge threat range.

King of Beasts is both appropriately named and very powerful. This will give a blanket +1 Boost dice to all faction units for any attack. This isn’t specific to just Brawl or Blast like many abilities we’ve seen in the past. You’ll definitely want to be bringing some Mutate units with Cassander to take advantage of this. Tooth and Claw is interesting, and will help sneak in some extra Boost dice if you have Action dice to spare.

Lastly, I also like Cassander’s Blast attack, it works nicely with Action: Pounce to shoot and scoot back to safety. Intimidate is fantastic for clearing screens and will make Cassander a great partner in 2 Monster games. Does your opponent think they are safe because they are screened in behind a building and unit? Shoot the building then move the unit away thanks to Intimidate. Now your 2nd Monster has extra power dice and a clear landing spot. 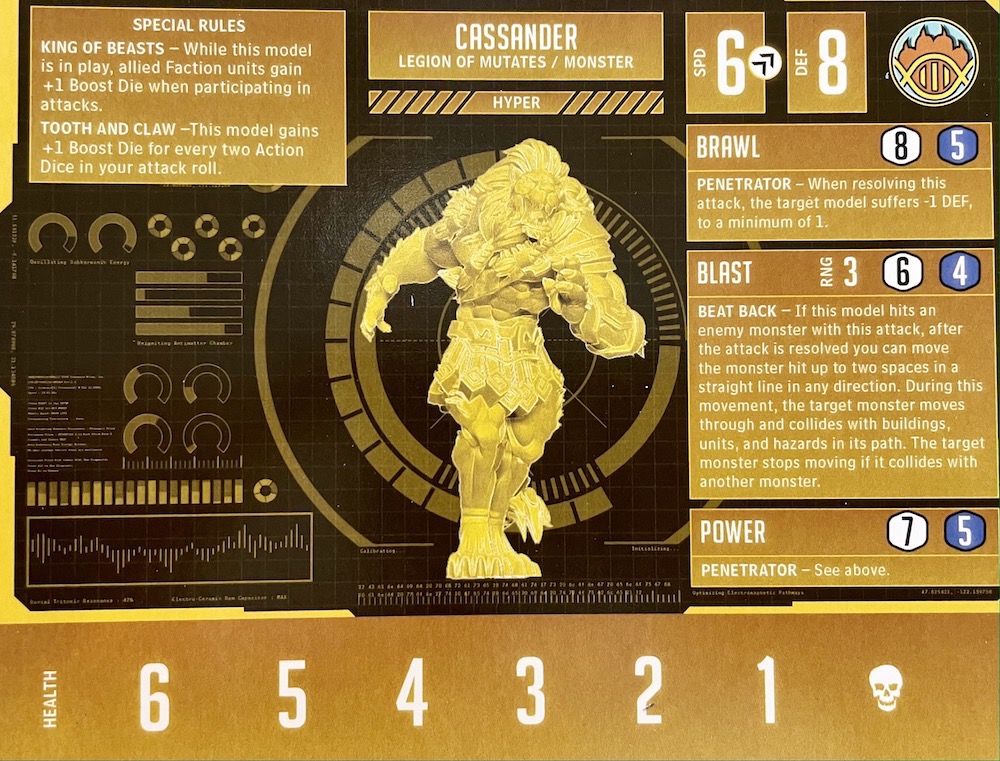 In Hyper form Cassander sadly loses Pounce, but picks up Beat Back on the Blast attack and Penetrator on the Power attack. These 2 abilities are very strong late game, Beat Back can ruin someone’s careful positioning and it can’t be overstated how useful Penetrator is on the Power attack. Cassander should be able to close out games with consistency. Also important to note is that Cassander keeps King Of Beasts, so your Mutate units will remain powered up as long as Cassander stands. 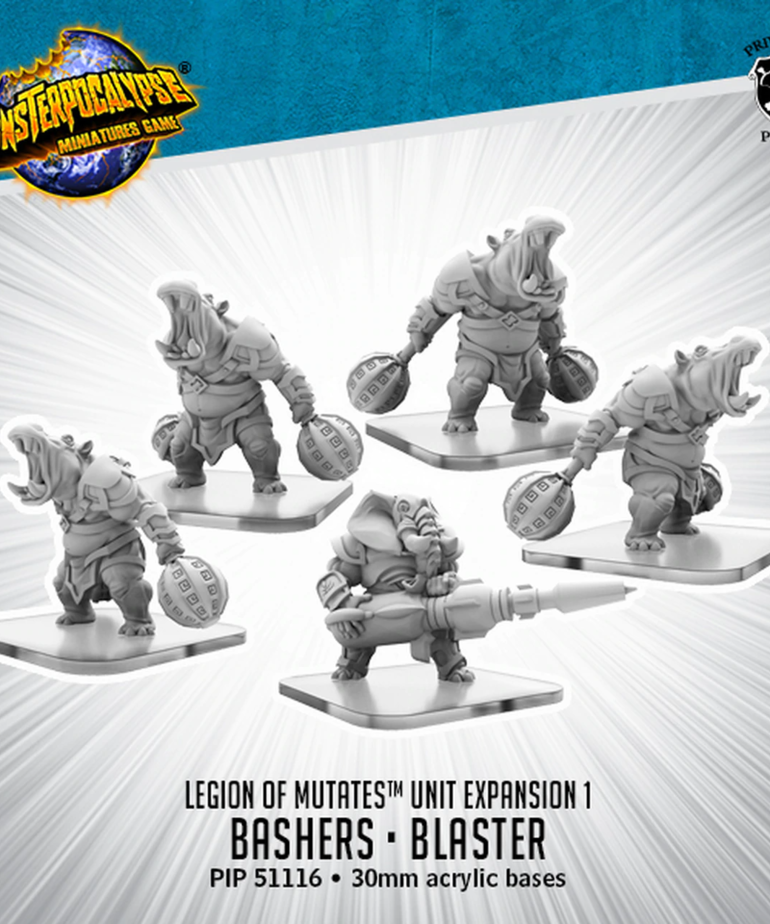 More great looking Legion of Mutate models, both in theme and sculpt detail. Assembly doesn’t get easier than this, these all metal models are a single piece. 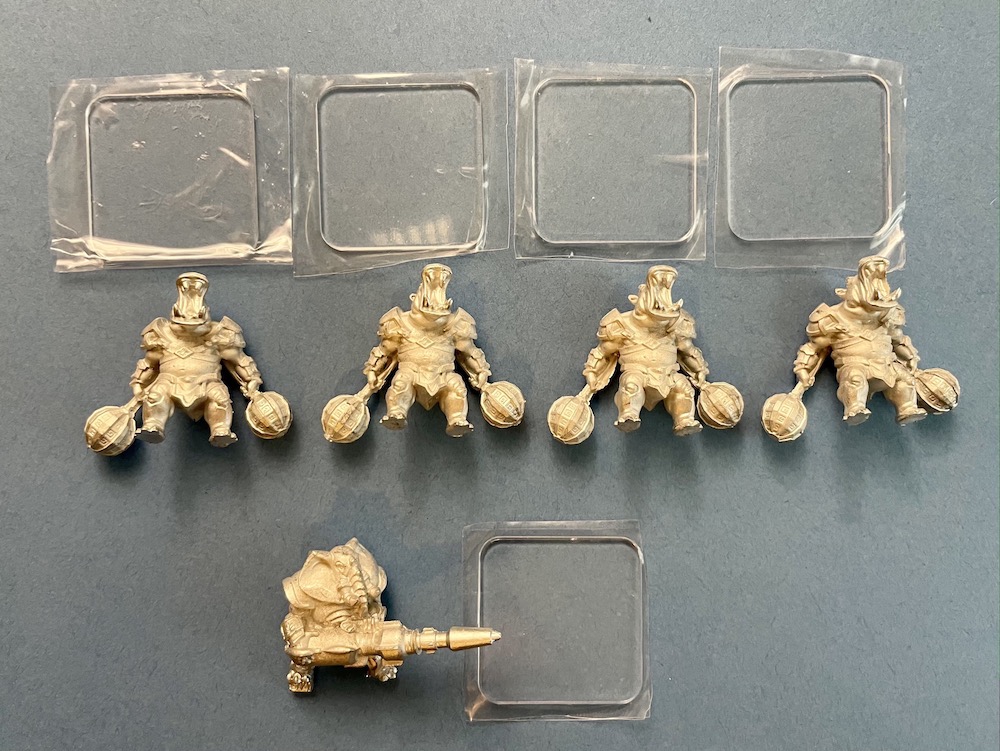 Bashers are a solid melee unit. SPD 5 is fast and DEF 3 is respectable. Press On allows for some tricky positioning, maybe moving back to an important space, or positioning for another attack thanks to Dual Attack. The Elite brings the Command bonus that you would expect. These pair especially well with Cassander who gives them an extra Boost dice thanks to King Of Beasts.

Overall the Bashers are exactly what you want from a baseline unit, Legion of Mutates players will definitely want to bring some along in their lists. 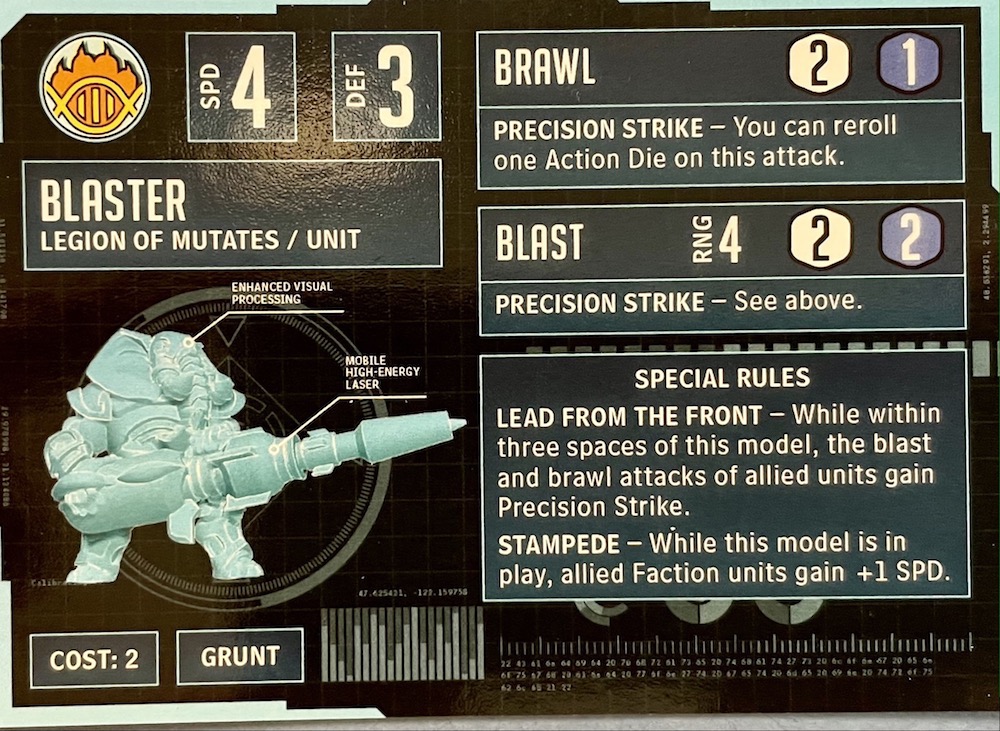 Lots of good rules on this 2 cost grunt. True to its name the Blaster brings a solid Blast attack with Precision Strike. Things get really interesting with rules like Lead From The Front and Stampede, both of which will greatly boost the units around the Blaster. Lead From the Front affects all units, not just faction! Start combining that with Commander bonuses from Elite units and extra dice from King Of Beasts and your units will be damaging monsters with ease! Also, remember that Stampede has no range limit, so sitting in the back all game and just providing an extra +1 SPD to all Faction units is a totally valid option.

These initial releases for Legion of Mutates are really strong. I’m really excited to see what else is in store for this faction. What do you think of Cassander and the Basher/Blaster unit pack? 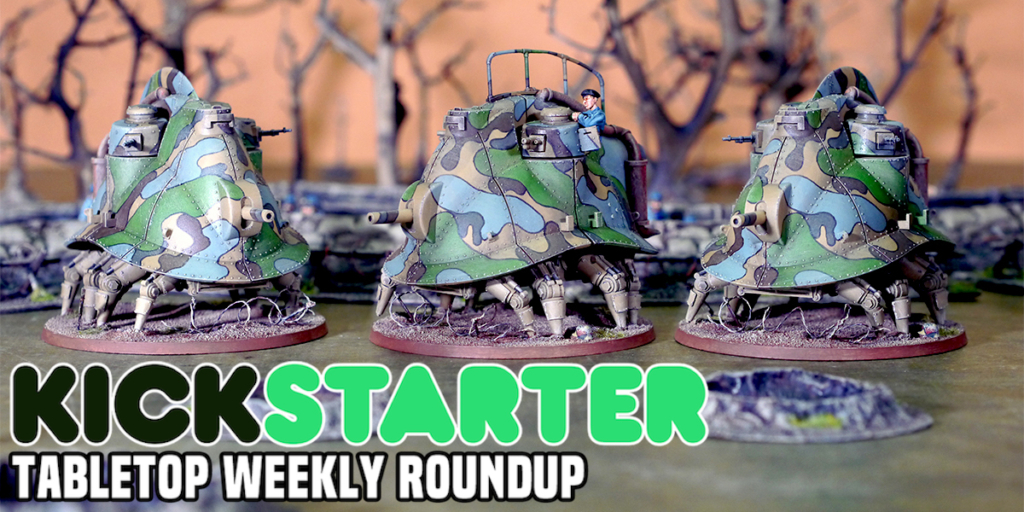