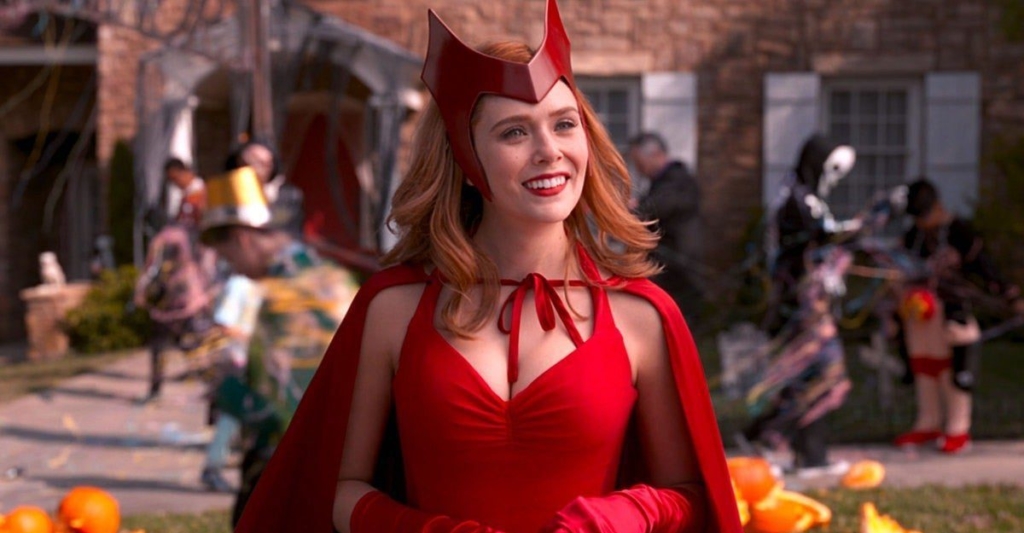 The last two episodes have rocketed the plot forward – identifies are revealed, new alliances formed, and new superheroes are created.

Since I had no power last week, I’m jamming episodes 6 and of Wandavision into one big recap. The last two weeks skip the 1990s and jump right into the aughts with these two episodes, and things get more complicated inside and outside the hex.

There are major spoilers below this GIF.

Episode 6: Malcolm in the Middle

What’s up breaking the fourth wall?! 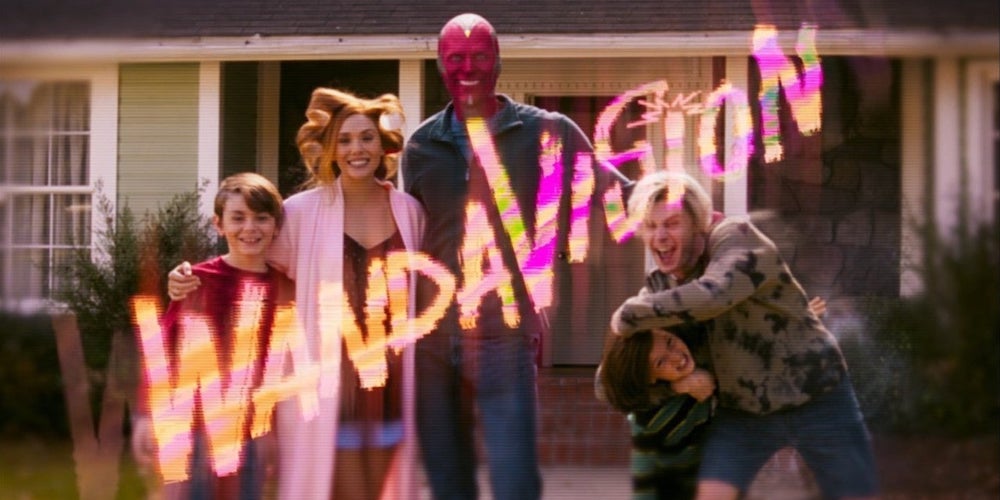 The Halloween episode is in full effect, including homemade versions of everyone’s comic book outfits. While it’s got the sitcom look, it definitely doesn’t have the sitcom feel for the main characters. No one is hiding powers beyond Vision wearing facepaint. There’s a marked self-awareness in the conversations between Wanda and alternate Peitro (who knows exactly what his role in the sitcom is as if he created it himself) about the hex. Again, it’s made clear that Wanda is controlling the show but this isn’t her creation.

Outside the hex, infighting among the S.W.OR.D. task force is in high gear. Monica and Director Hayward butt heads about how to handle Wanda. Darcy, Jimmy, and Monica get the boot. The trio sneaks into a data center and discovers that Hayward is tracking Vision, but not much else. They are dead set on getting into the hex to help those inside.


Back in the hex, the other side of town, Vision goes out on a “neighborhood watch patrol” and encounters frozen sections of Westview where residents stand around like extras waiting to be called up for a scene. He comes across Agnes (dressed as a witch) in her car seemingly lost at a dead-end street; he releases her from the control of the hex and she reminds him that he’s a member of The Avengers and that he’s dead and utters a particularly awesome cackle. Vision is clueless. He ventures farther out to escape the hex.

This happens, which nearly tears Vision apart and presses Wanda to expand the bounds of the hex to save him. And now there are clowns instead of S.W.O.R.D.

On to episode 7, their take on Modern Family complete with opening credits and camera style. Wanda just needs a break before everything flies apart. Nothing in the TV world is stable. Objects are moving through eras, the house is redecorating itself, and Wanda is losing it. Agnes takes the kids off her hands for a bit.


Vision finds Darcy amongst the clowns, releases her and then they attempt to get Vision back home in a funnel cake truck. In this ride, Vision learns that he was created by Ultron and that he’s actually dead. The truck is stopped by endless traffic lights, repair crews, and lines of small children. Have I mentioned how much I love the unapologetic goofiness in this show? 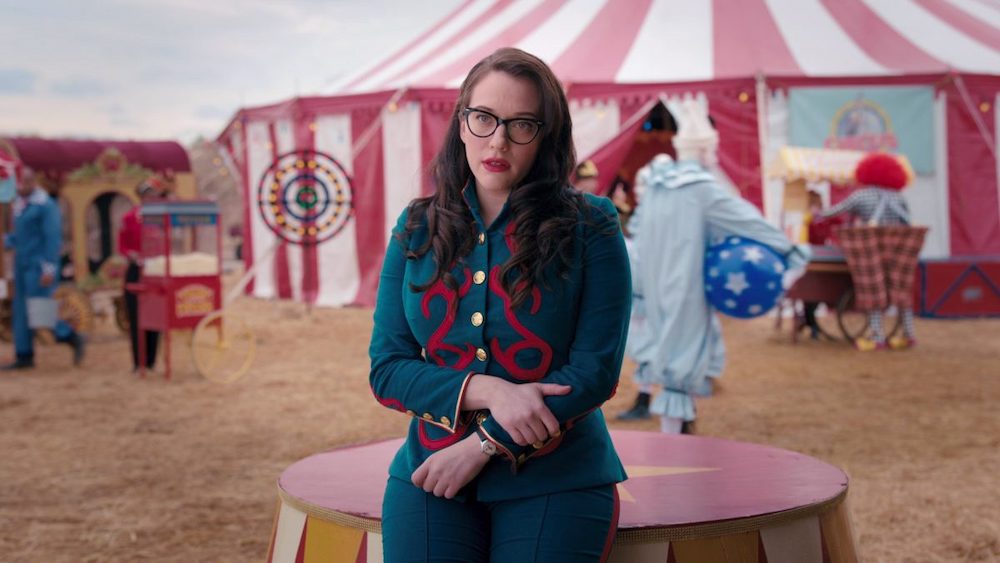 Outside the hex, Jimmy and Monica managed to escape the expansion and have hooked up with a special team with some badass equipment. That badass equipment fails and spits out this great part Astro Van part space rover. This is where we get to see the birth of a new superhero into the MCU – hello Photon! Monica’s cellular structure changes when she fights her way through the wall of the hex, and arrives on the other side without morphing into a sitcom character.

Monica confronts Wanda in the culdesac, there’s more superhero stuff before Agnes walks her back to her house to “protect her” from having a hard day. The kids, who are supposed to be hanging at Agnes’ house are not around. When Wanda checks the basement to see if they’re there she finds something else.

Gloating for a moment – I WAS RIGHT ABOUT AGATHA! 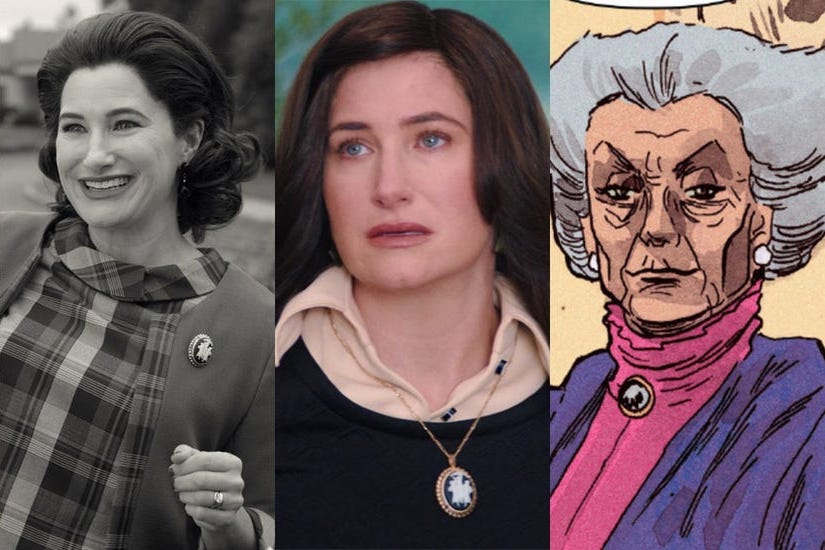 Ok, so… what’s with the book and that ad I left till the end?

The book is Darkhold aka The Book of Sins, written by Elder God Chthon. It’s been in the possession of Morgan Le Fay, Aelfric the Mad Monk, Cagliostro, Taboo, Gregor Russoff, and Dr. Strange.

The ad in the episode is a face value easter egg – Wanda is a nexus being. She’s a point of convergence for the world’s mystical energies. This clarifies a bit about her place in the MCU, and I’m sure she’ll get her code name by the end of the series (she doesn’t have one in the MCU right now). The designation moves her from “I have psychic powers” to “I control chaos magic.” Wanda is going to grow into an insane amount of power by the end of this series.

Knowing that she will be in Doctor Strange and the Multiverse of Madness this shift in her character and the appearance of book makes a ton of sense. 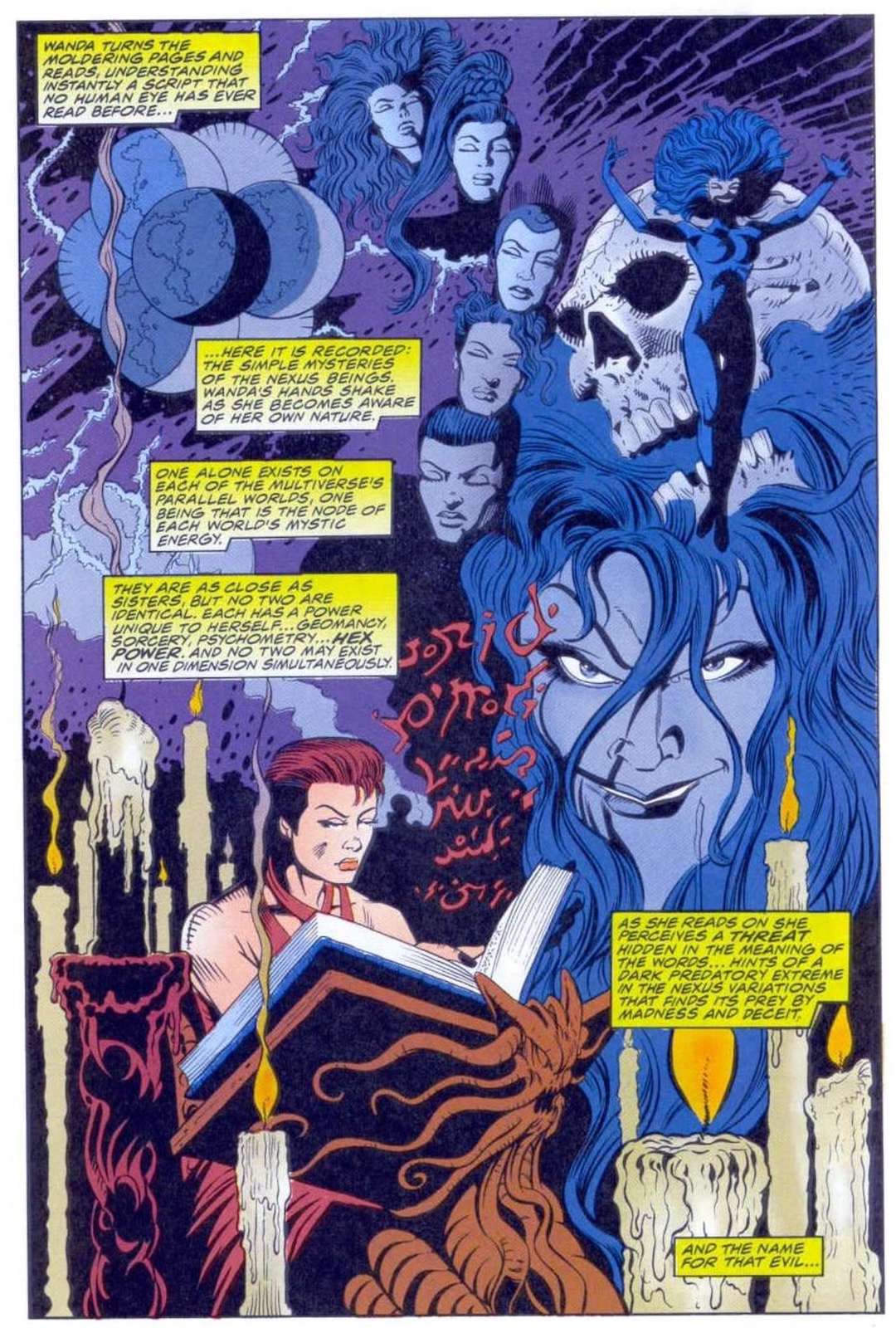 We have two episodes left. What are your last predictions? I’m betting that the battle that starts at the end of the series ties directly into and will end in Doctor Strange and the Multiverse of Madness. I’m not sure if we’ll see Mephisto, but there will be allusions to his existence. 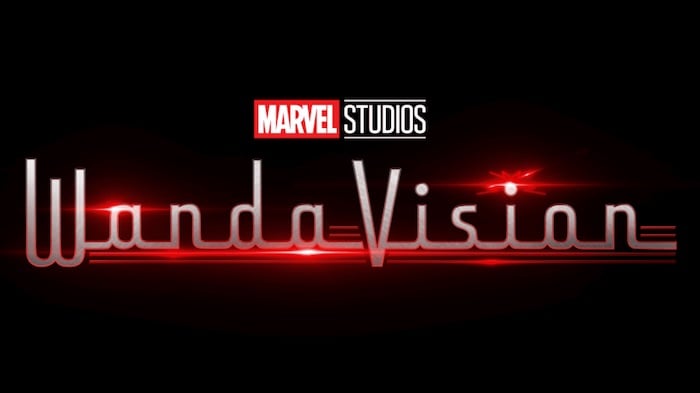