D&D: How Ravenloft Was Born – Prime 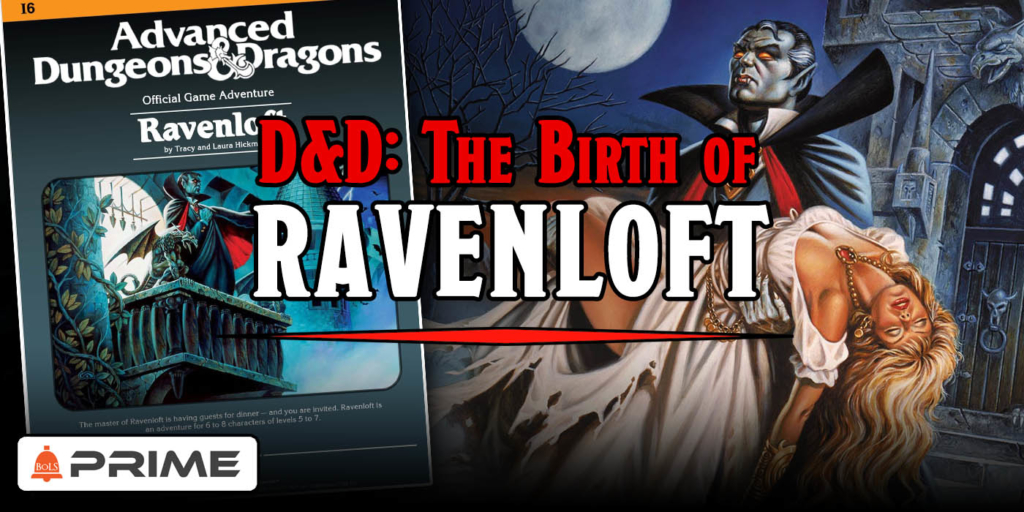 The mists of Ravenloft are about as iconic as it gets when it comes to horror and D&D. But where does Ravenloft come from? Let’s find out.

Vampires have been around since 1st Edition in Dungeons & Dragons, but right up until the latter days of the mid-80s, they hadn’t really made as big a splash as some of the other undead creatures. Liches and skeleton lords and demiliches offered a much more creative challenge for the early D&D writers. So why, then, is the most famous vampire in D&D also responsible for the birth of a whole horror world? What changed?

When Ravenloft was born it was the confluence of a number of factors–not the least of which was the goldmine that TSR had struck with their campaign setting supplements. Players were hungry for new worlds to adventure in, and Ravenloft was exactly that. People love horror and all its trappings no matter what–but Ravenloft begins some eight years before its first publishing, when one of the co-creators of Dragonlance, Tracy Hickman, comes to work for TSR.

Tracy and Laura Hickman first started working on adventure modules. These were the grist that kept the mills of TSR turning, and the Hickmans were no strangers to producing adventures, but where the Hickmans stand out was in what they wanted out of Dungeons & Dragons. The game was, as you might imagine, quite popular within the ranks of TSR, but one evening, as the story goes, Hickman came back from “a disappointing session of Dungeons & Dragons.”

One of the big problems Hickman had had was running through a dungeon where they came across a vampire in a random dungeon filled with oozes, goblins, zombies, and other familiar dungeon dressing. So both Hickmans put the work in to create a vampiric villain with more of an impact in the world. 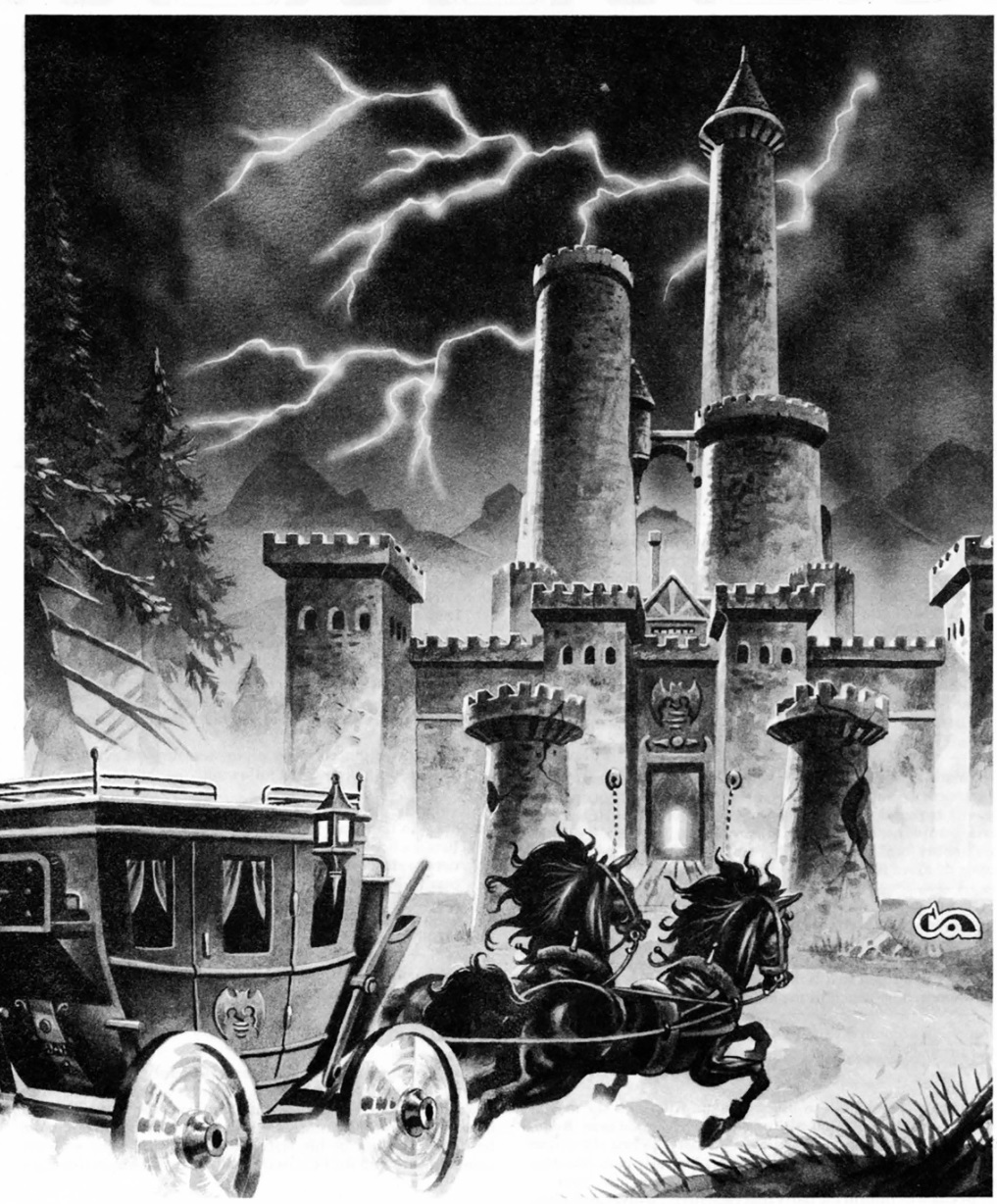 Funnily enough, Strahd’s popularity might be because he wasn’t intended to be played in Dungeons & Dragons. Which is an object lesson in how far D&D has come. 1st Edition, especially, was all about fighting monsters and acquiring loot and leveling up. It had more in common with games like Diablo than, say, Dragon Age, to draw a more modern comparison. But the Hickmans had a long-standing Halloween game, and so, Strahd von Zarovich was born. 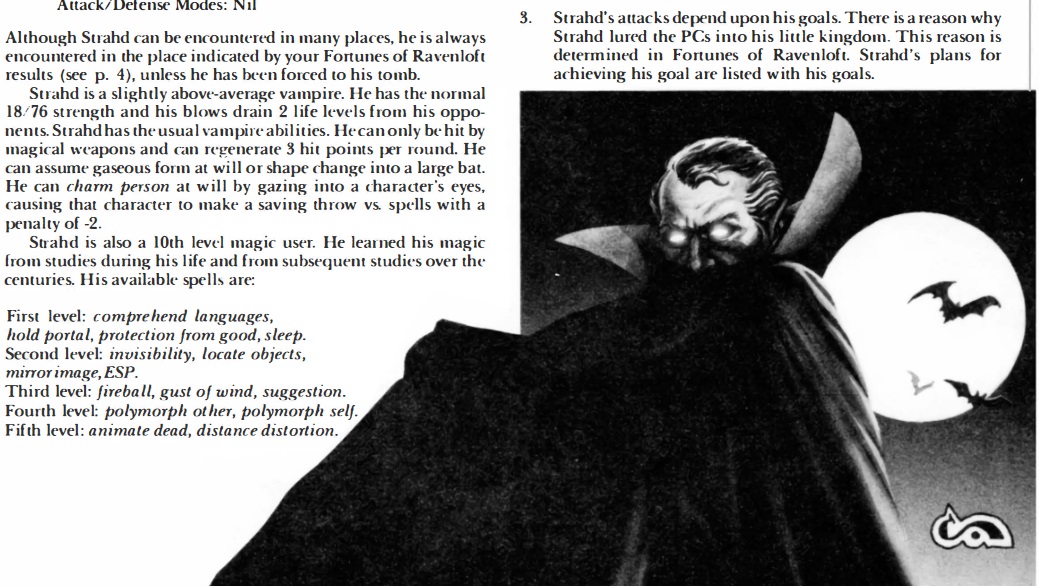 When he says “I am ancient, I am the land,” he really means it. He came about before Ravenloft. They had designed their own game system called Vampyr, but when the Hickmans were hired on to TSR, they were charged with adapting their popular vampire villain to a proper adventure module. And so they released the infamous Module 16: Ravenloft. 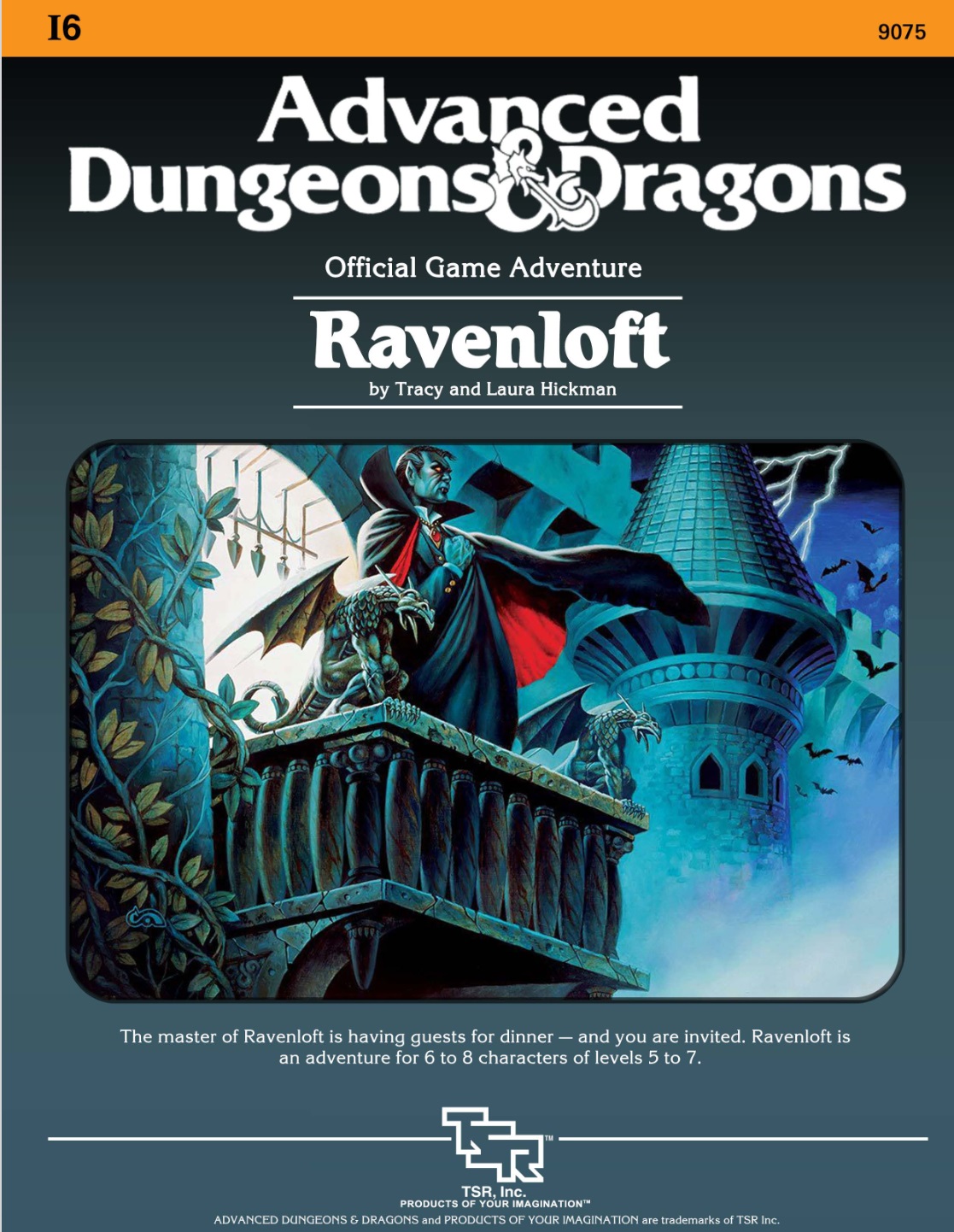 In 1983, Ravenloft introduced the world to Strahd von Zarovich. It’s very much what you’ve come to expect from vampiric stories–the players are tasked with keeping a young Barovian woman, Ireena Kolyana away from “the devil Strahd” who is ever in search of the reincarnation of his lost love, and the object of both his obsession and torment, Tatyana.

Strahd was the first time D&D had had an arch villain. Sure, there had been popular villains before, but Strahd was the first to really make a name for himself. He had his own sort of agency, and was a force like no other. Not just an evil cleric whose goal is to find treasure, or whatever, Strahd wanted what he wanted. 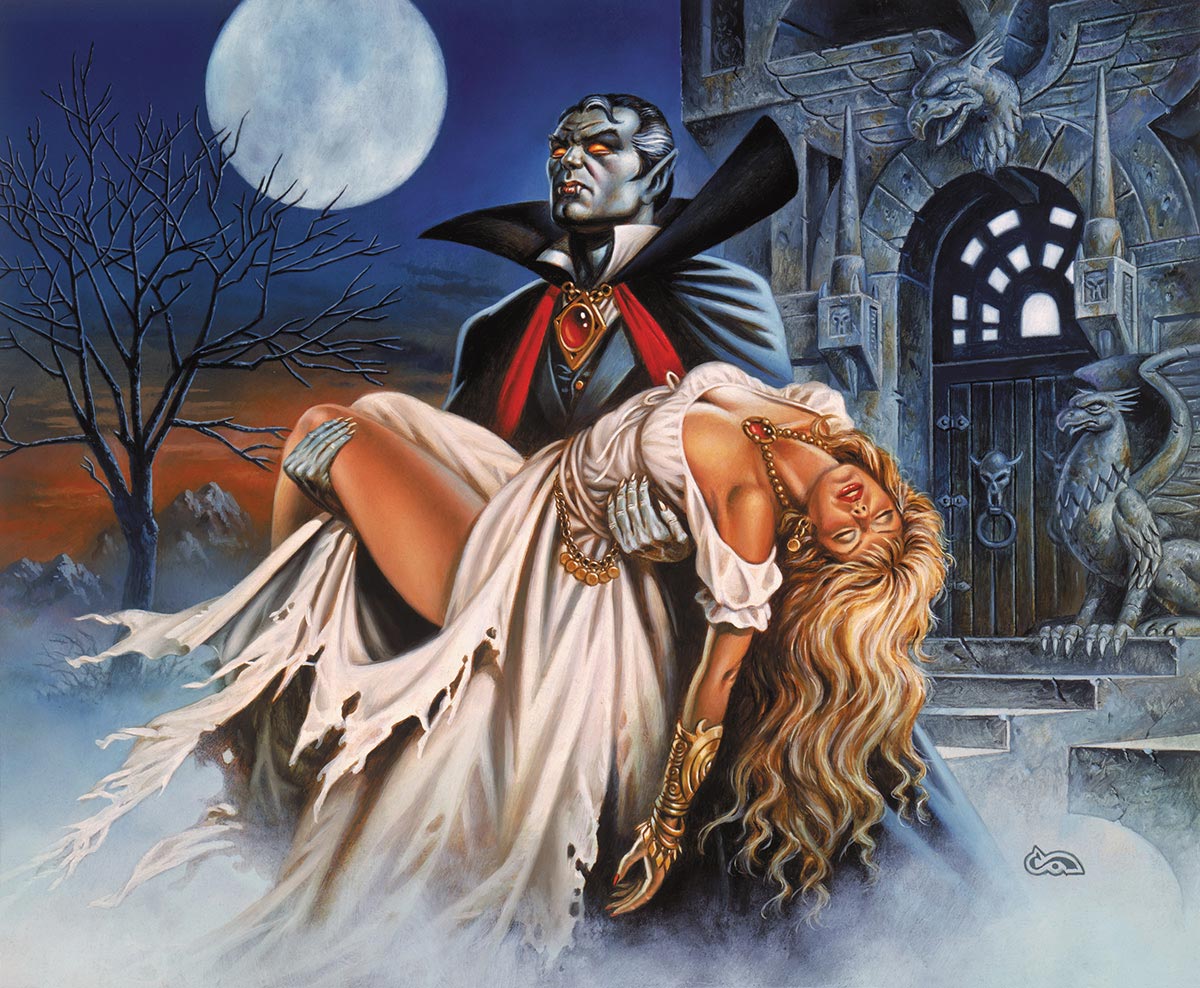 And the initial release was popular enough to warrant a second module, The House on Gryphon Hill, which once again featured the villain Strahd in a weird sort of Jekyll and Hyde kind of situation. But. This adventure was much less popular. And Ravenloft had faded into the background for a time. Until 1990 rolled around, and 2nd Edition D&D was growing fast and furious and looking for campaign settings.

Here came Strahd von Zarovich once more, along with a whole Gothic horror gauntlet in Ravenloft: Realm of Terror. 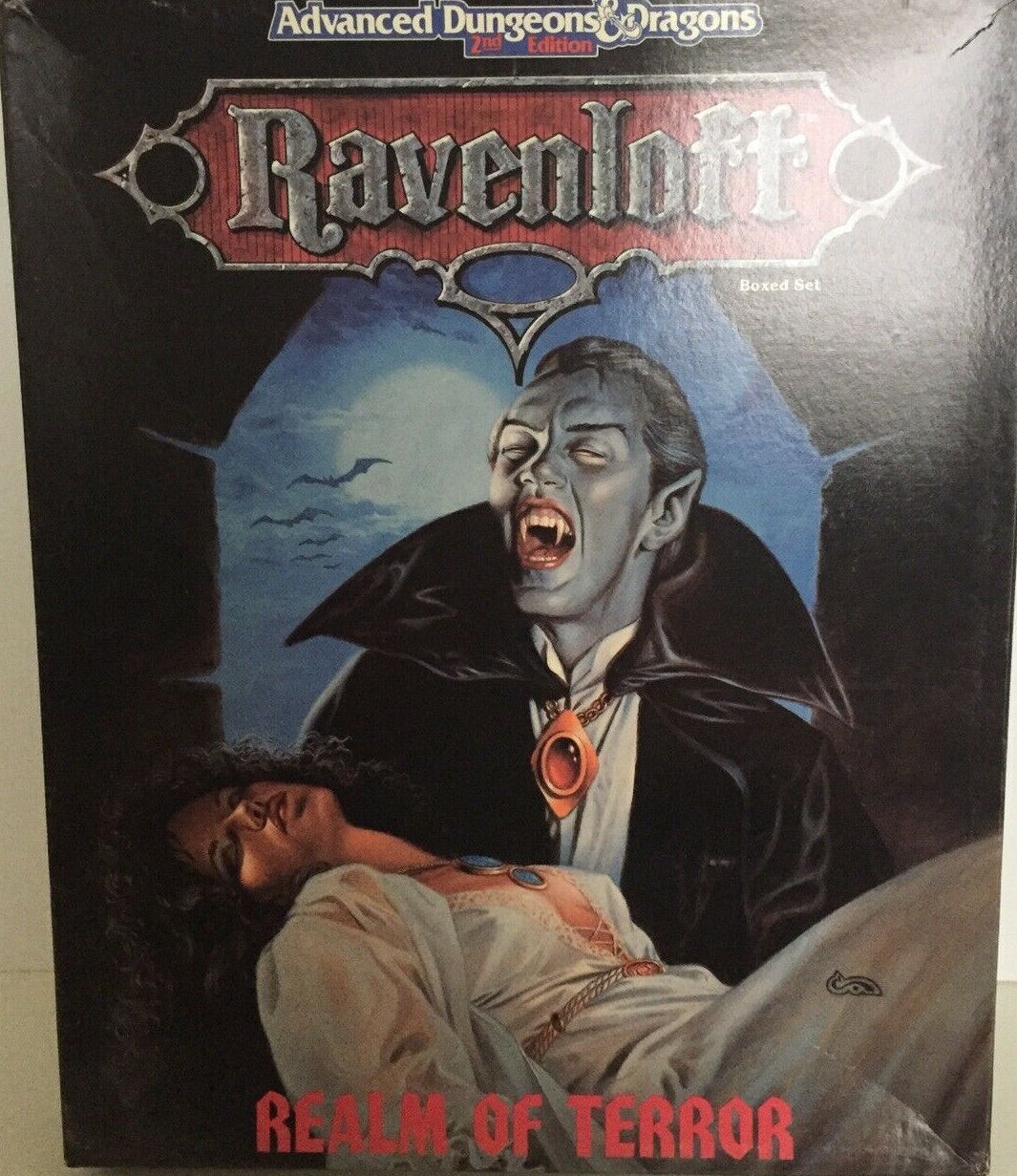 Only now Ravenloft had morphed from the original gloomy realm meant to be tucked away in whatever corner of the world into the ‘demiplane of dread’ which featured many such pocket dimensions, and allowed Strahd to exist alongside evil liches, mad scientists, mummies, and more.

The rest, as they say, is history. 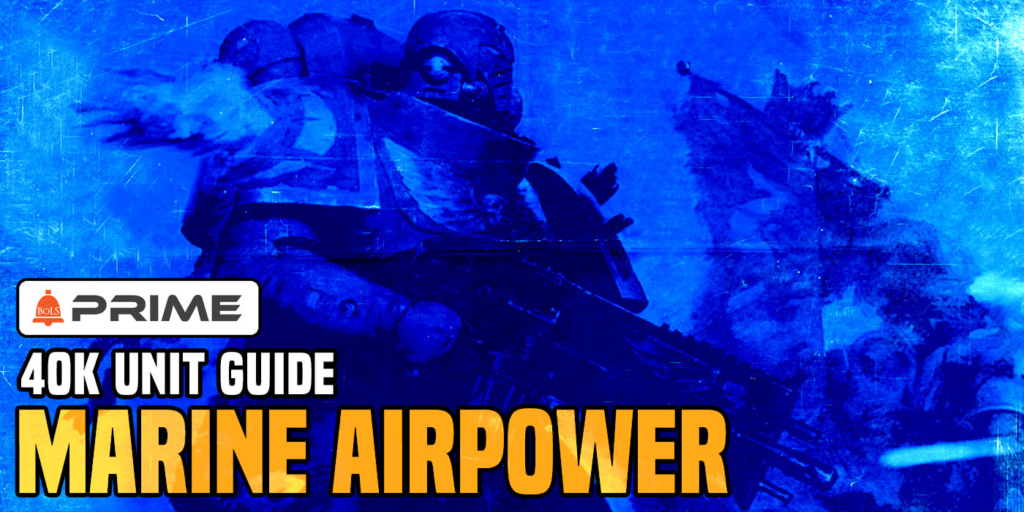