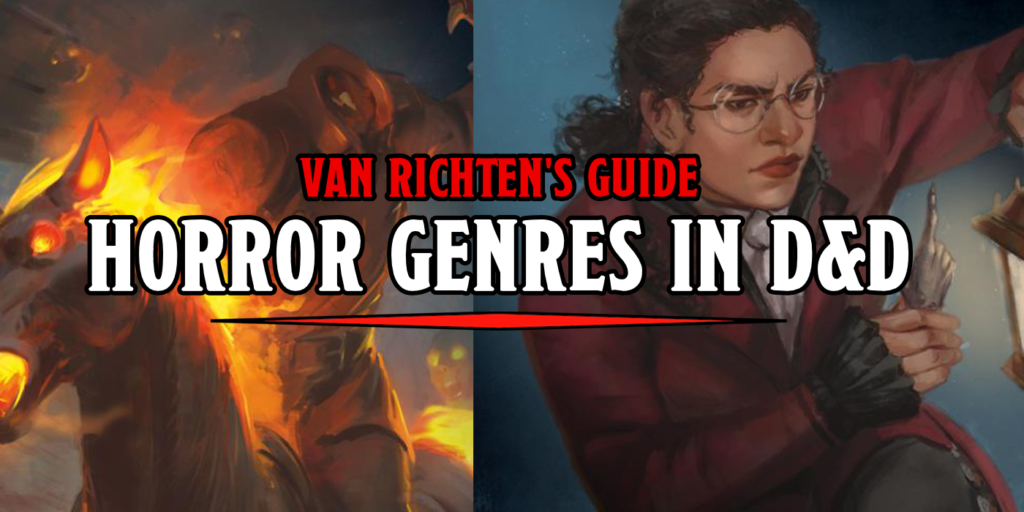 Van Richten’s Guide to Ravenloft promises to offer a diverse array of horror covering many genres and previews some of them with gruesome new art.

The world of Ravenloft is actually a collection of different pocket universes, or demiplanes, as they’re colloquially known. These demiplanes can be regions as large as a continent or as small as a local village and associated keep–whatever the size, whatever the terrain, they’re all designed to torment a single powerful figure who rules over the domain with incredible dark power.

Van Richten’s Guide to Ravenloft adds an ambitious new wrinkle to the demiplanes as well, theming each one around a different genre of horror. There are six primary genres of horror, as well as 4-6 subgenres, depending on how much a slash brings things together in your mind. Each of these genres is denoted with a special logo, designed by artist Trystan Falcone. Below you’ll find each of the logos as well as a bit about the associated genre.

It’s certainly an ambitious challenge for a game that’s primarily about killing monsters to make ‘being terrified of the monsters’ a new part of the game, but if WotC can pull it off, they’ll have an exciting new book on their hands. 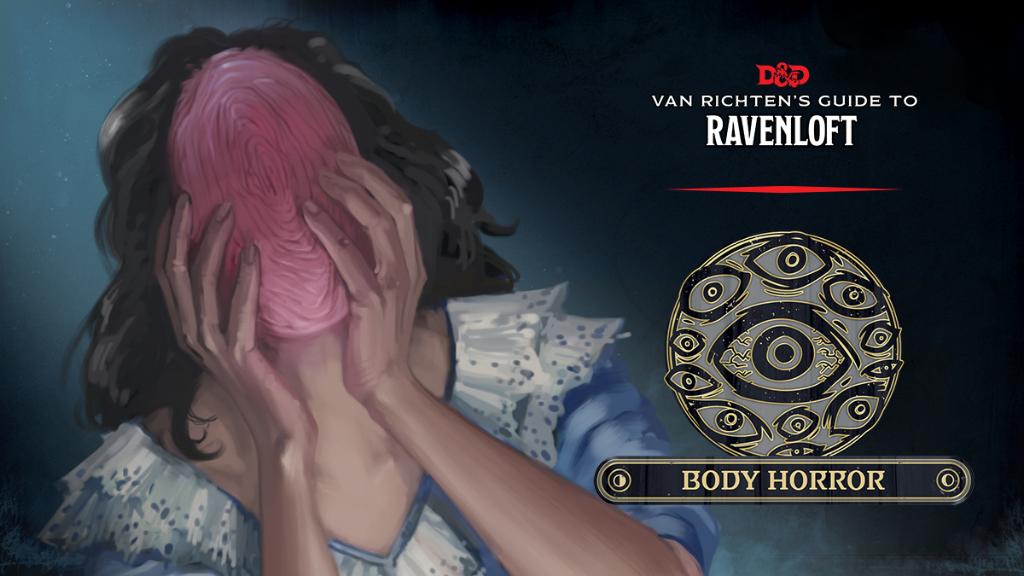 Body horror as a genre examines a universal fear: our own failing anatomies. We rarely think about what goes on beneath the skin.

First up, Body Horror, sometimes called biological horror–this is all about the grotesqueness of the human body and the horror that lurks just below skin deep. You can expect mutilations and monsters and the ravages of disease for an interesting mix of the mundane and the graphic. If you want to see horrible things happen with eyes and bones and the like, this is where to go. 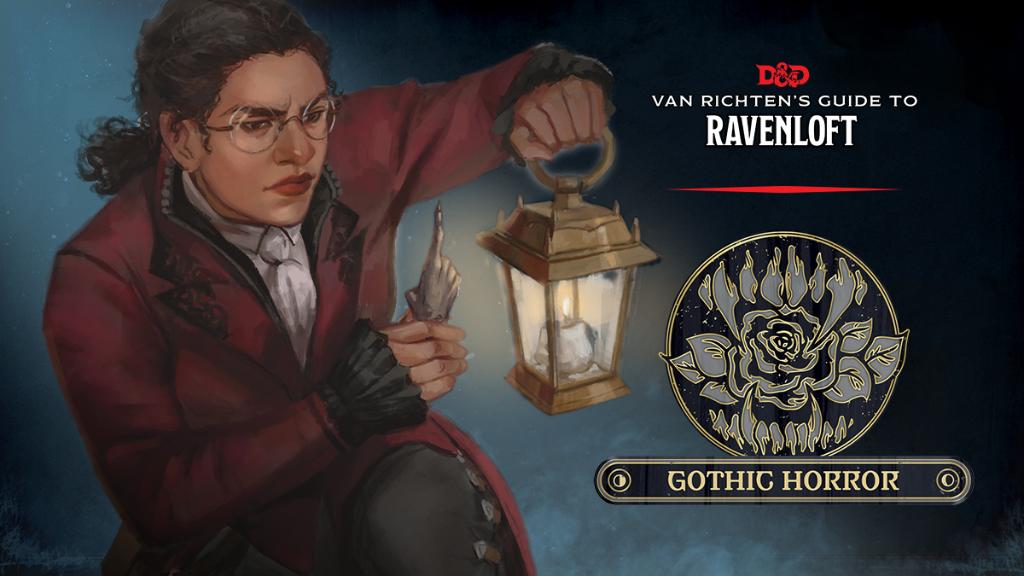 Gothic horror is about the terror within, not without. It shatters the illusion of humanity in a poignant way by holding a mirror up to us and saying: look at what we truly are, and look at what we pretend to be.

Gothic horror is an interesting genre to tackle, because Gothic horror, or Gothic fiction in general is all about focusing on horror, death, and romance–it’s an emphasis on emotion and the bleakness of true horror. The New York Public Library classifies it as: “the battle between humanity and unnatural forces of evil (sometimes man-made, sometimes supernatural) within an oppressive, inescapable, and bleak landscape.

Classifying this as “holding up a mirror” is a broad brush to paint it with, but if you’re imagining people like Van Helsing, or his D&D knockoff Van Richten, or monster hunters who have to use cleverness and understanding of the human condition to deal with monstrous and horrific forces then, you’re in the right bailiwick. 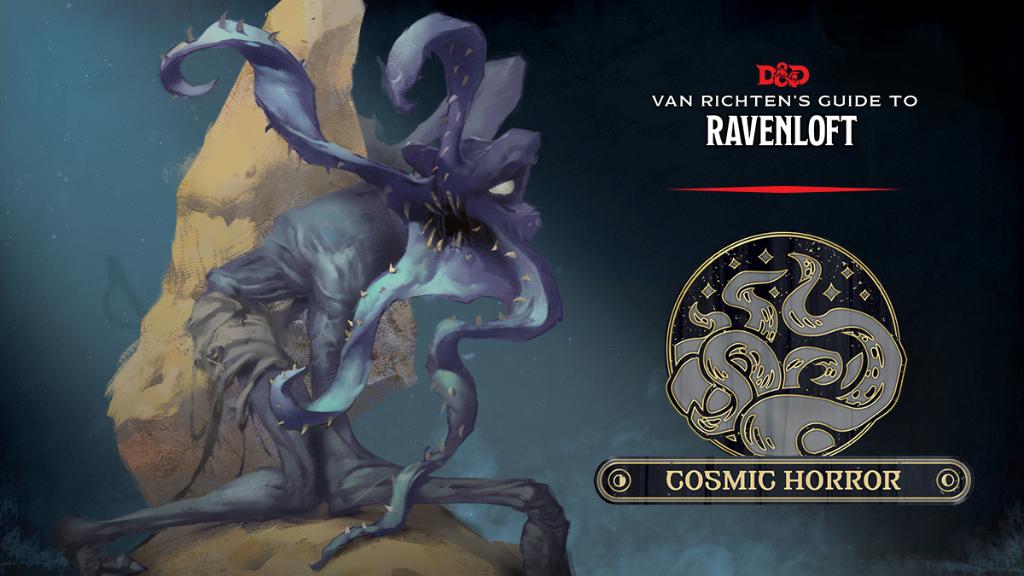 Cosmic horror revolves around the fear of personal insignificance. The genre is predicated on the idea of entities so vast and so genuinely beyond our comprehension that we cannot fathom their simplest motivations.

This one’s equally a difficult genre to pin down, blending familiar stories like “the cthulhu mythos” with existential dread. It’s the terror of knowing that one day the stars will burn out, and that the universe doesn’t care about you. Fear of the unknown and the unknowable, and especially things whose scope is too great for someone to understand–the incomprehensible–is a big part of this genre. And given that D&D comes from a genre that’s all about killing incomprehensible monsters, this one is a particular challenge for Ravenloft. 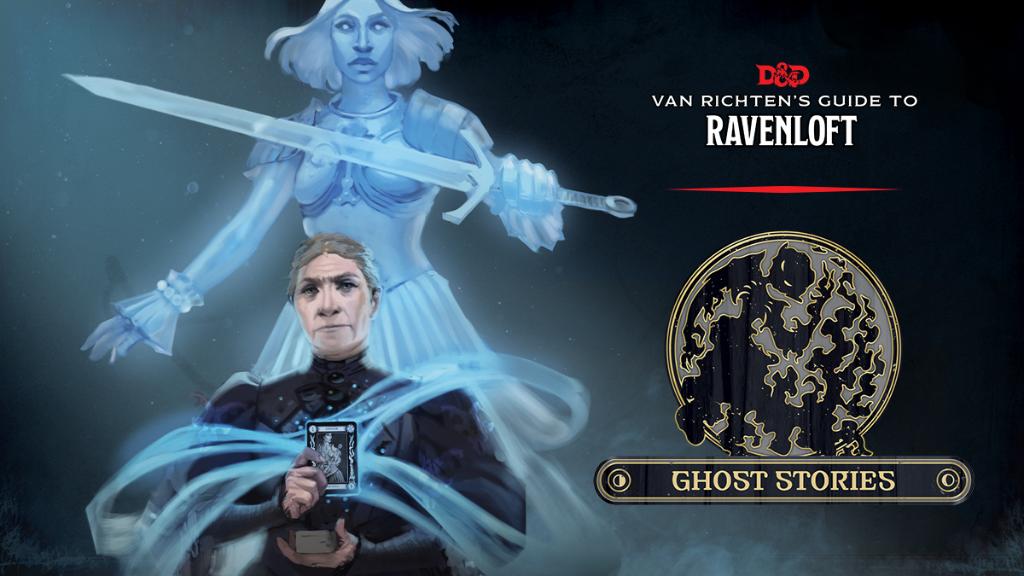 Ghost stories touch on the issues of human existence: the nature of the soul, the weighty fact of morality, and the burden of ancestry and history. Spirits represent supernatural justice, as well as grief and the need for closure.

Ghost stories, on the other hand, are stories with ghosts in them. As WotC’s blurb says, ghosts are often symbols–lingering souls who seek vengeance for wrongs done to them, and who often stand in for the long arc of history that is built upon the tyranny and brutality of the past haunting our present still. 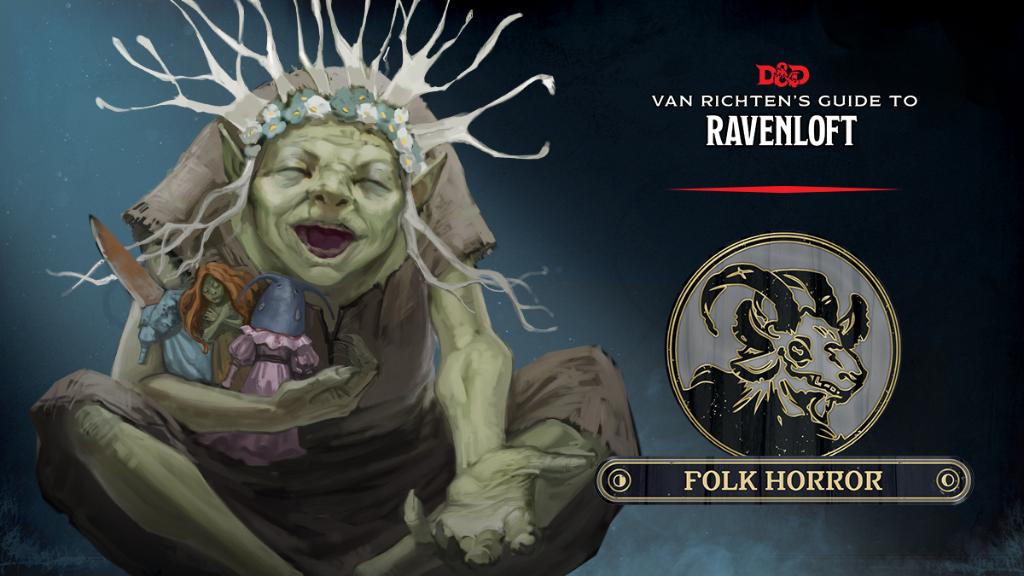 Folk horror, on the other hand, are the stories that draw on folklore–the stories we tell to remind ourselves that life wasn’t as it always is now. It reminds us that community can be a fragile thing, but there’s a sort of fascination in life beyond the edges of tradition. 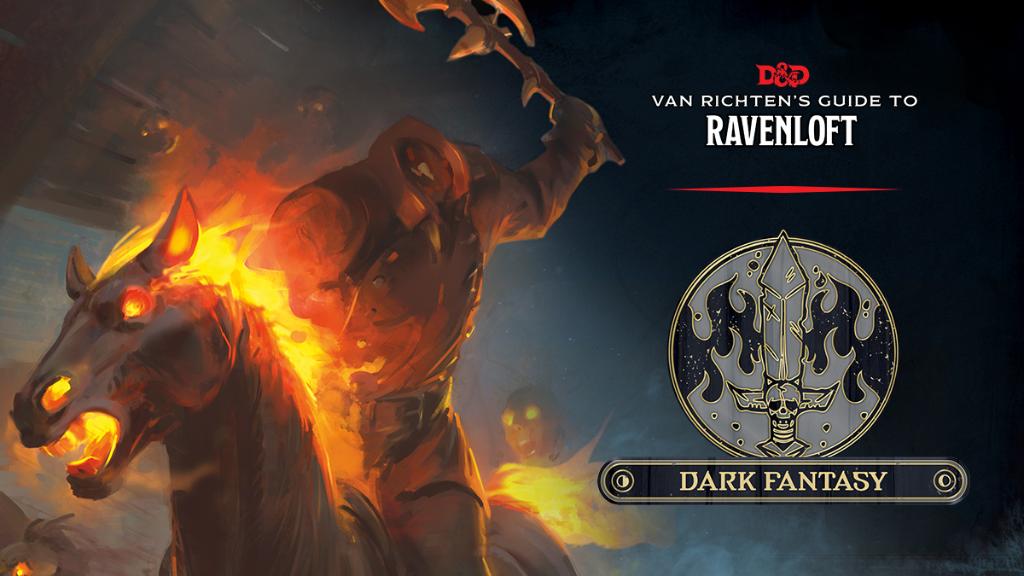 Dark fantasy is as much a genre of fantasy as it is a genre of horror. Dark fantasy refers to fantasy worlds where grim themes, nihilistic plots, or horrifying elements inform a fantasy tale.

If you like your fantasy grim and perilous, if you like gloom and dread alongside your sword and shield, and want to tell stories that reflect on how hard life can be especially once you add in the corrupting influence of power and magic, then dark fantasy, with its ominous, foreboding exploration of the supernatural, where the forces of “good” are a distant, almost forgotten dream, is the genre you’ll want.

That’s an overview of the main genres, but I’m much more intrigued by the subgenres: 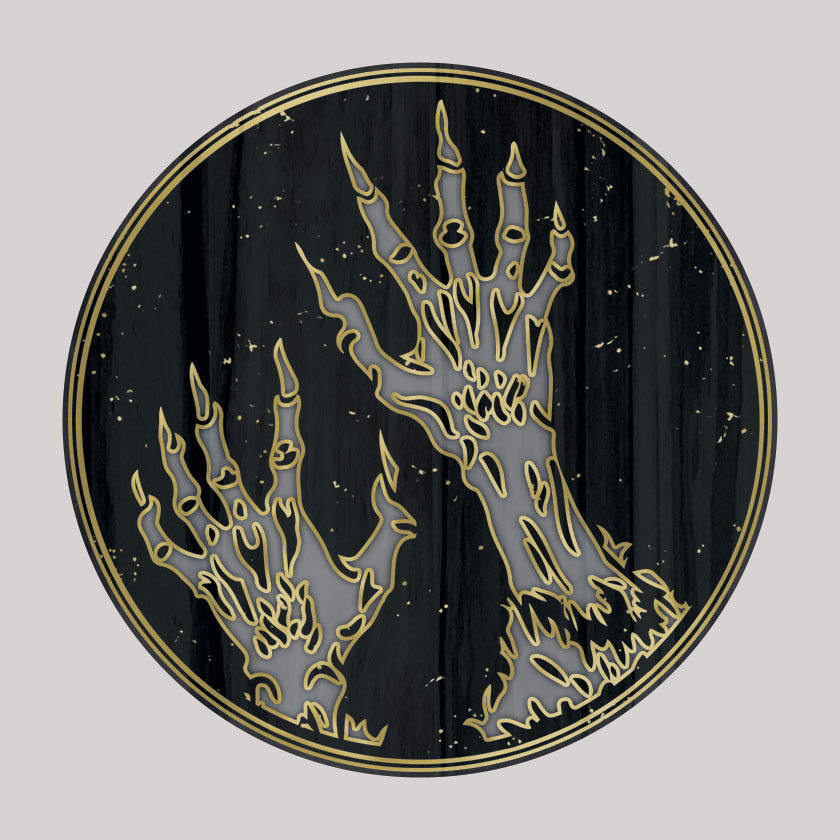 First up slasher/monster — these are horror stories that can be in any genre but with a single powerful antagonist whose main interest is in killing as many people (often the party) as possible. If you’re running from a masked murderer or cursed werewolf, you’re in this category. 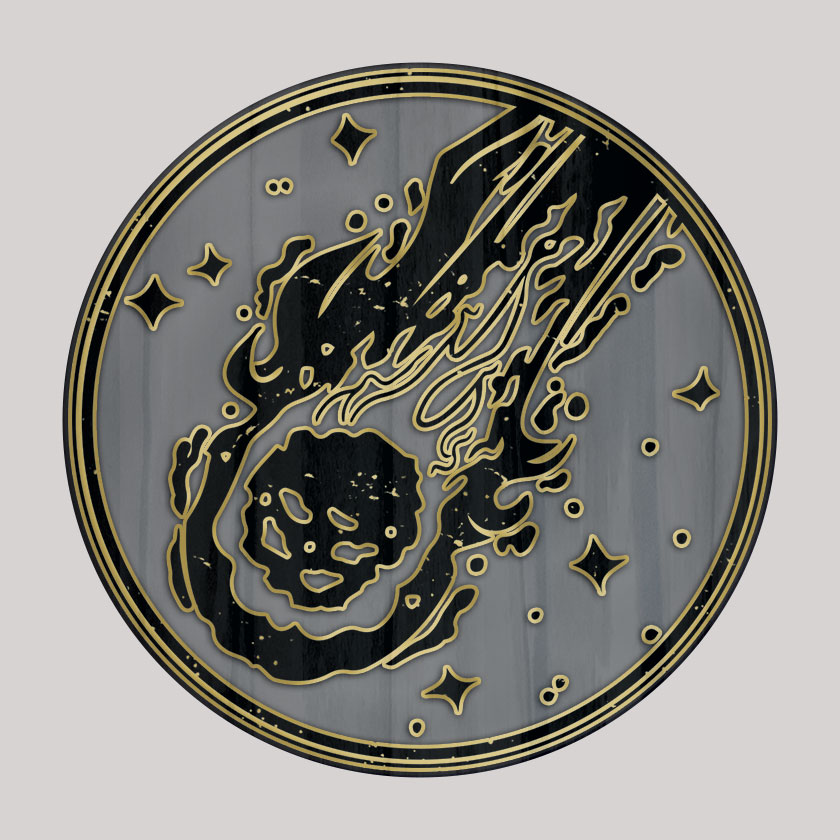 On the other hand survival/disaster horror is all about enduring the worst of it. As the logo implies, it could be surviving a disaster like a meteorite impact that raises the dead or just wreaks havoc on the local ecosystem. If you have to gather resources or move quietly, you’re in one of these stories. 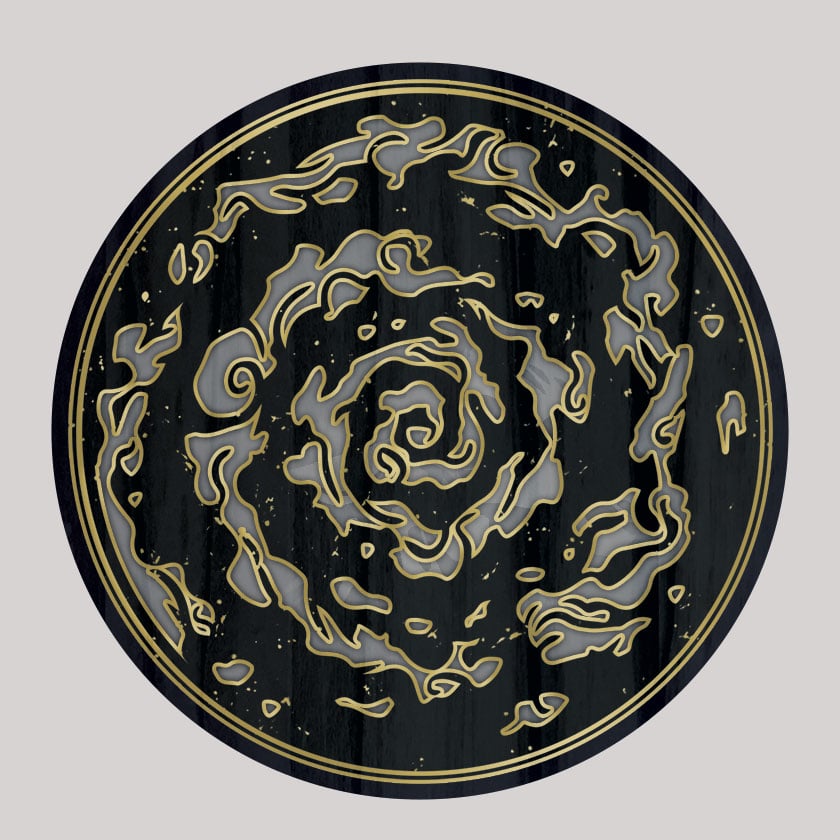 Or if you’re dealing with questions of what is real, and what is true, and the horror that comes from knowing that your mind and senses can fail you just as easily as your body can, then you’re probably dealing with a psychological horror kind of story. 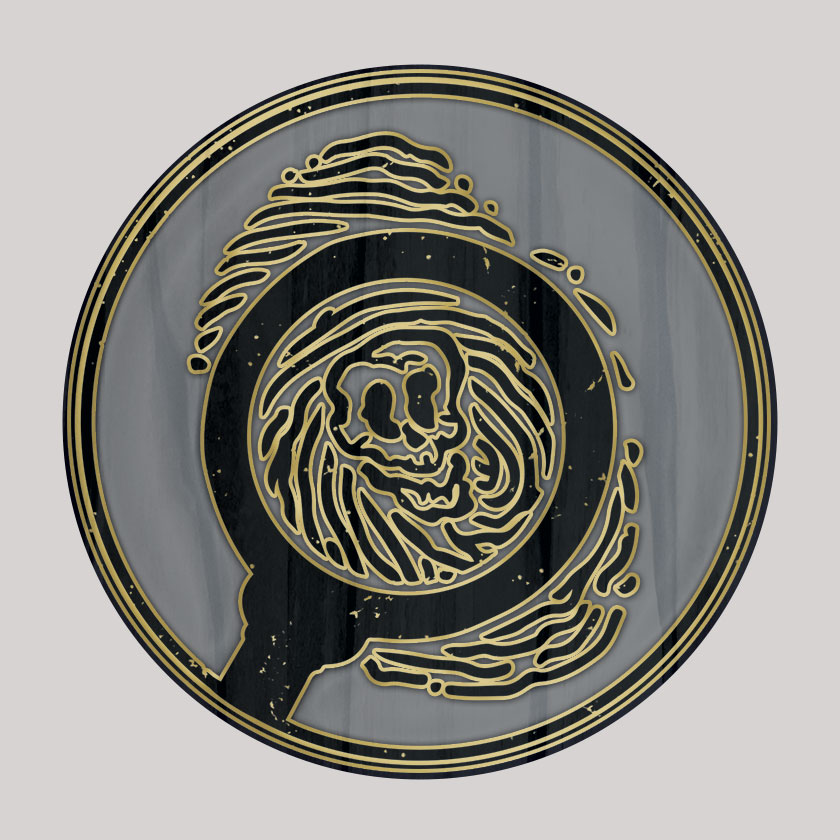 Finally, my favorite category, occult detective, which is all about investigating the unknown or delving deeper into a mystery that you might not want the answer to–if you’re making search rolls, or are Christopher Lee or Peter Cushing, you’re probably in this category.

Which genre are you excited to try?

Tabletop Gallery: Ultramarines in Commorragh - And They Shall Know some Fear 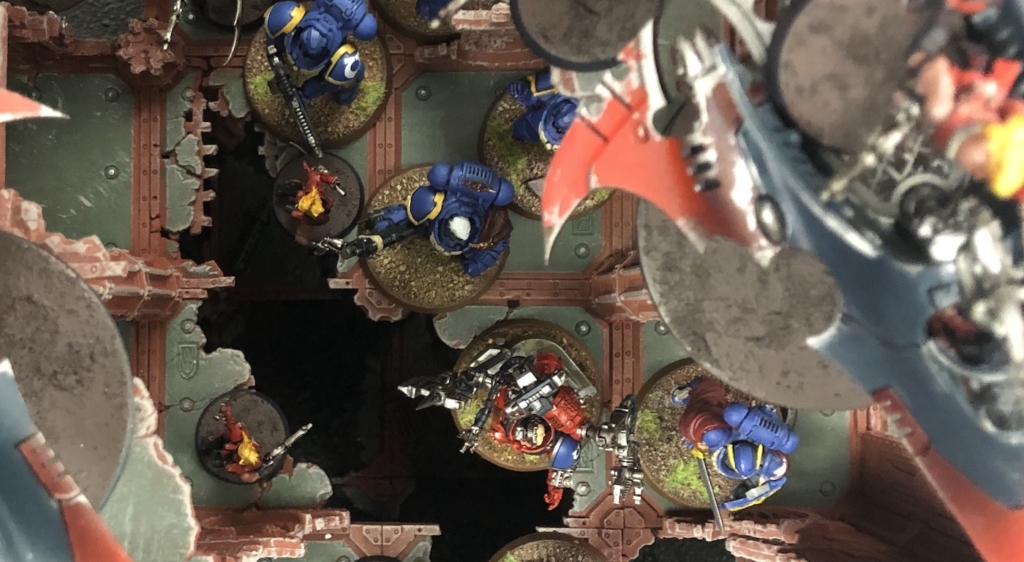