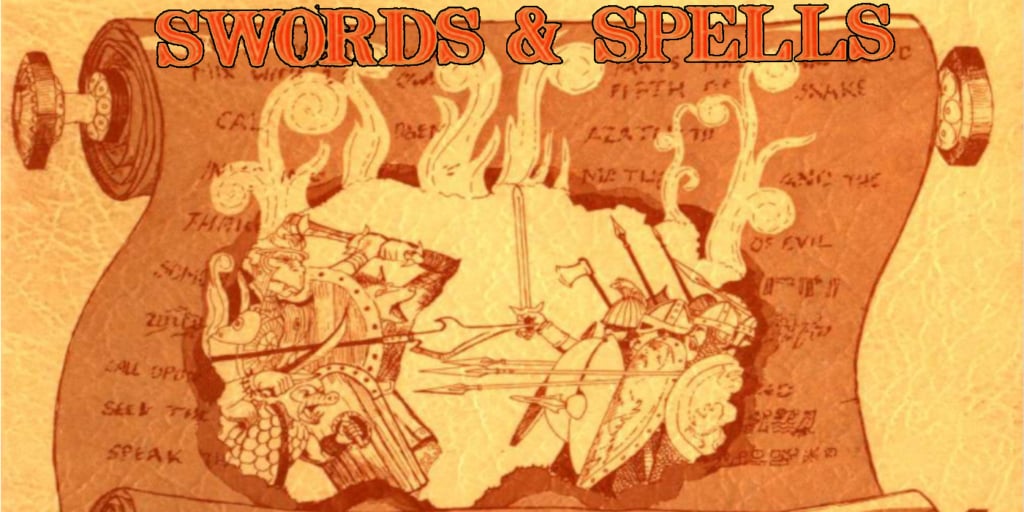 Granted, “official” does not necessarily mean that it’s all that good.

When Dungeons & Dragons was just starting out, way back in the 70s, there weren’t any rules for two battling armies. So good ol’ Gary decided to remedy that. While thinking about it, he realized trying to roll that many dice for perhaps hundreds or thousands of units is impossible. So, the logical conclusion: remove the dice entirely! 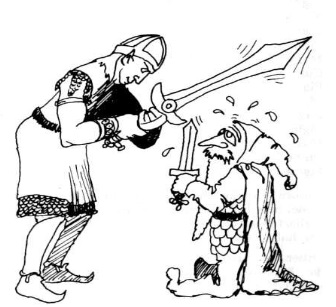 “No crits for you, friend.”

Technically, Swords & Spells is a RPG supplement for 1st edition D&D. However, it is fully playable as a standalone wargame. It just happens to use the theme as D&D, including all the monsters and spells players had come to know so well. S&S is a set of rules that players can use with their own miniatures in order to replicate full scale battles.

Fans of S&S will often call it the successor to Chainmail, a similarly styled wargame. And rightfully so; Gary Gygax developed both, and it is as much flatly stated in the opening text. S&S was released as the fifth and final supplement for the original D&D boxed set, but it does not bear the “Supplement V”, as each other of the supplements do. 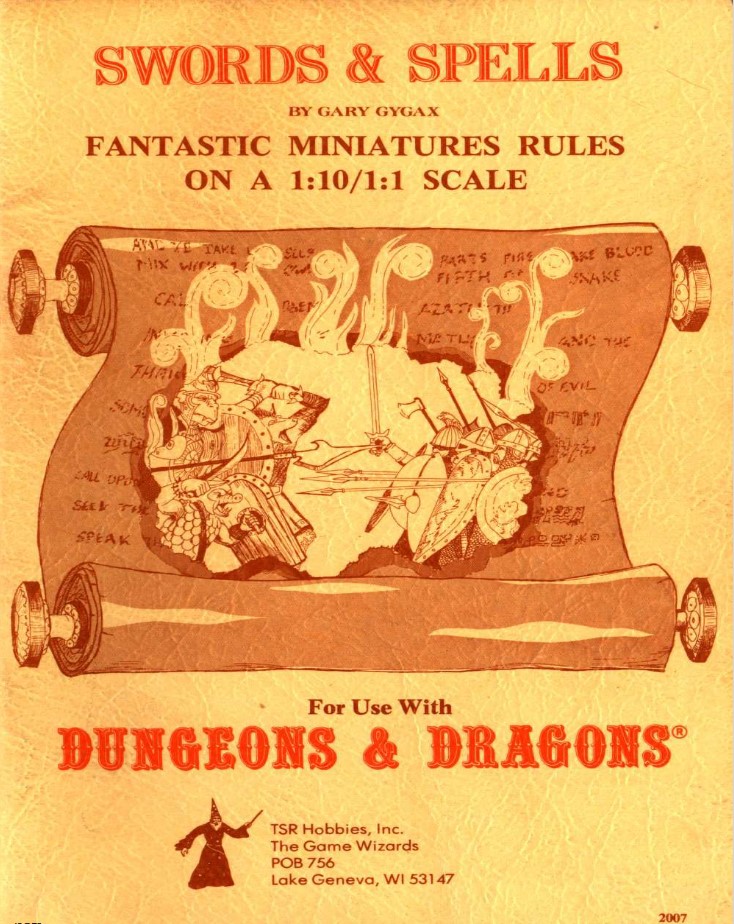 Regardless, S&S was not well received when it was released in 1976 and now is mostly regarded as “it’s fine”. The rules of S&S were not included in later editions of D&D. 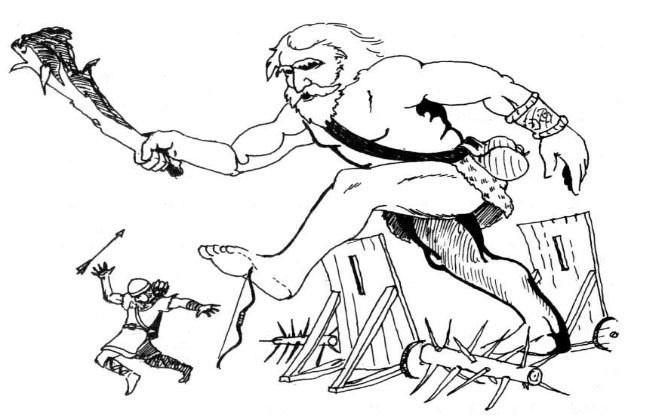 “But we spent 50 points on these fortifications!”

As stated before, S&S attempts to simplify the scale of war and it does a decent job of that. Still, there are a few clunky rules sprinkled throughout. Perhaps the best example of what I mean can be shown by looking at the turn order for the game. 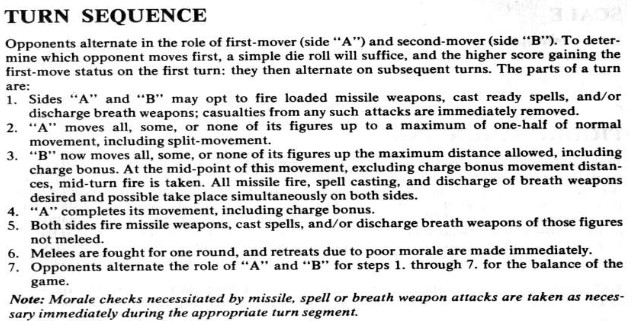 So, the turns go thusly:

Truth be told, I’m not even sure I have that right. But that’s how I’m reading it. Player B just gets a bonus attack because they moved second, I guess. But attacks are simultaneous so attacking first is fairly irrelevant? Still, positioning in any wargame is a big deal, so I get that. Still strange. This is basically how the rest of the rules unfold. It makes sense on some level, but ends up over-complicating itself along the way. Case in point: Charging.

Any creature can make a Charge. However, if the unit they are in doesn’t end with a melee after that charge, they become disorganized and must refer to a separate table to see what happens, based on what sort of creatures the unit is comprised of. It’ll take that unit to spend some of their movement points in order to return to proper formation, which can be up to 2 full move actions. 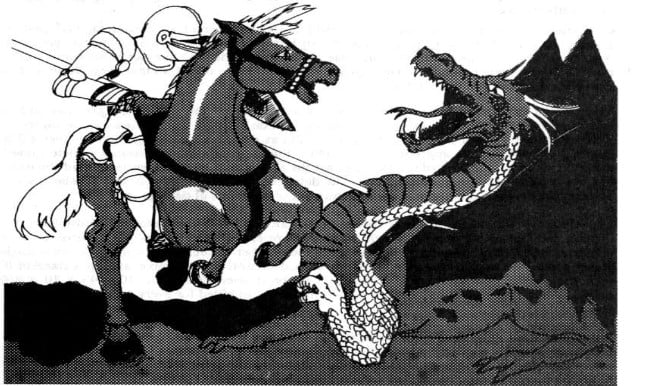 And this seems like so many steps which could have been avoided with “Units can only charge if they will engage with an enemy unit at the end of the charge”.

But let’s skip over the other complicated stuff like Facing, and Morale Checks, and Firing Arcs, and Fatigue, and Tracking Ammo, and Terrain Effects on Movement, and how well armored your units can be before they stop being considered peasants (it’s no more than 10% with 6 AC), and get to the fun stuff: combat.

Combat without dice is strange, but does kinda make sense in a way. When you’re “rolling” hundreds of dice, you’re going to eventually average out, so why not just use that average? For the record, I have no issues with that idea at all, but as you might expect, the rules get a little too granular.

The attacker checks the table for their level and which weapons they are using and compares the AC of the defender and sees how much damage they do.

Super easy, right?! Yeah, it is…. but what about modifiers? 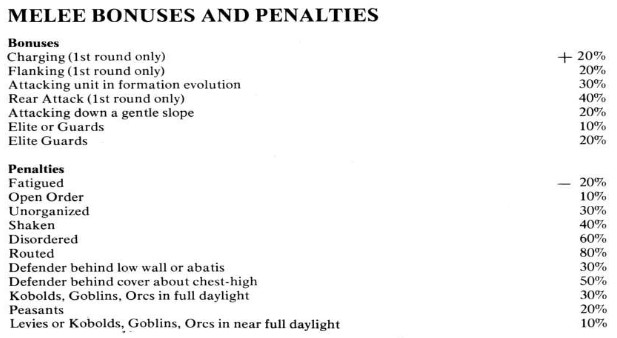 All in all, Swords & Spells is the epitome of “of its time”. It uses a lot of the game tropes that wargames of the time used and we collectively stopped using some time ago. Still, it provided an option for D&D players in the 70s a chance to run an all out battle.

You can check out the entire rulebook here, if you’re interested. If nothing else, the art is fun and I applaud the efforts S&S makes to encompass something so huge into something manageable. I’m cherry picking the parts that fit my narrative (though it is mostly cherries), but it does do a good job of scaling down something as grand as full on war. 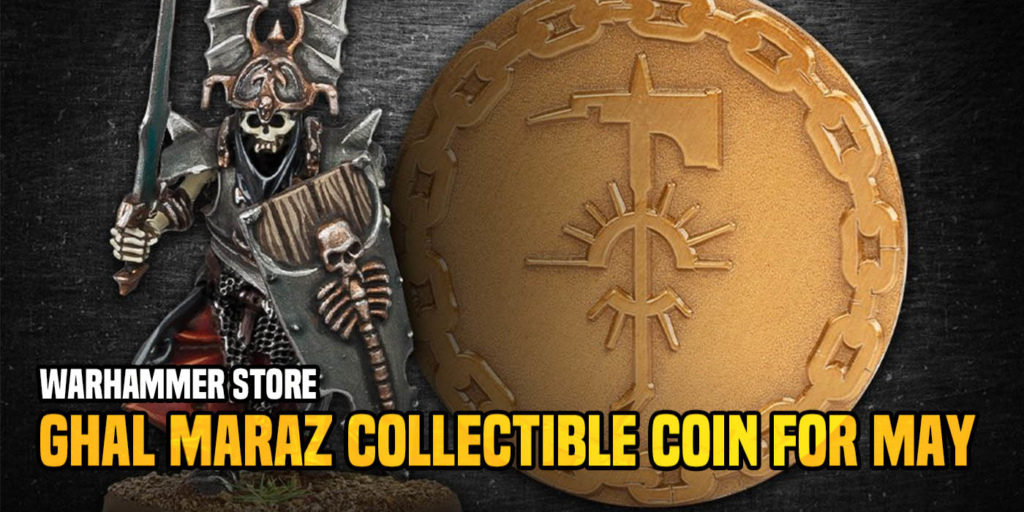