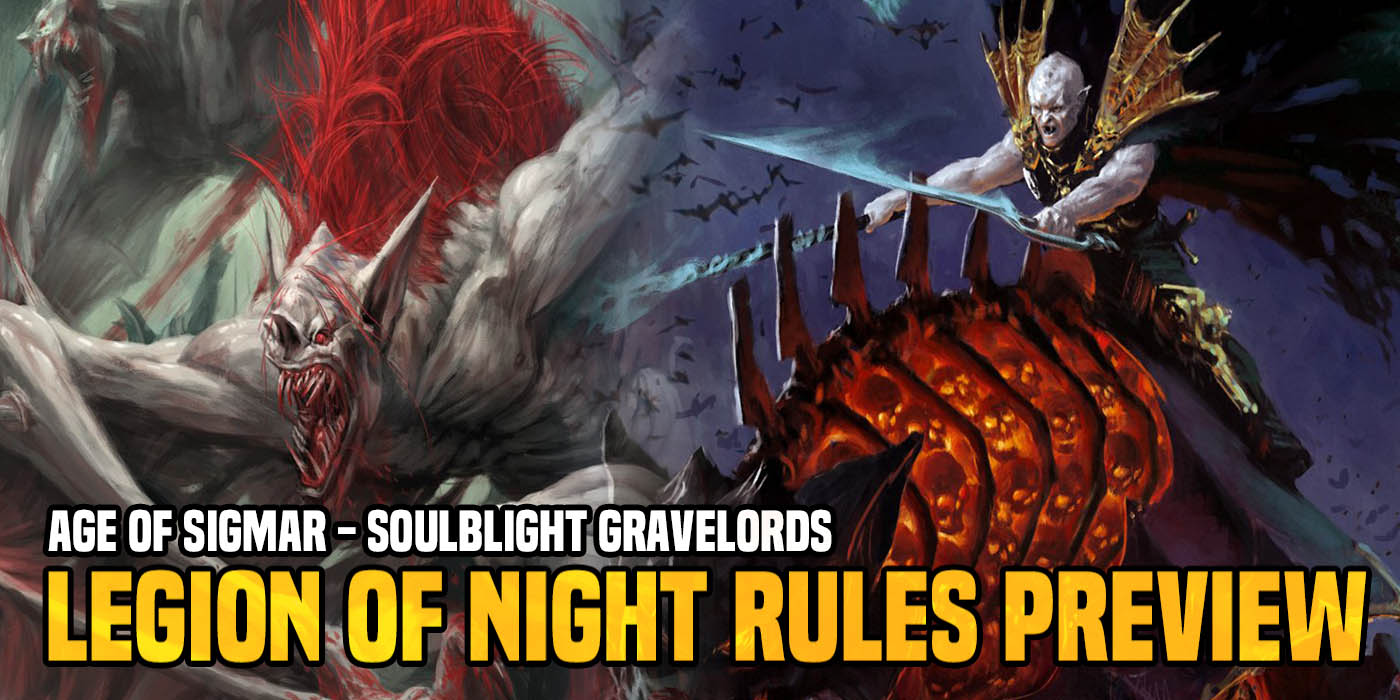 Games Workshop is showcasing some new rules from the upcoming Soulblight Gravelords and this time it’s the Legion of Night’s turn.

The Spotlight is on Mannfred’s Legion of Night who are all about those important “advancement opportunities” and just want to get things done. Or, you know, aren’t afraid of a little underhanded trick here and there. Anyhow, let’s take a look at the Legion’s update in the upcoming book.

“Why not make the most of your units of undead hordes by making them hard to put down? Your enemy will have to work extra hard to take them out, buying you time to get your best vampiric units into place.” 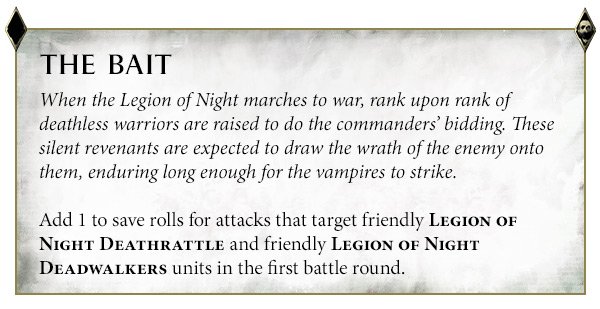 This ability is an interesting rule. Those pesky Deathrattle and Deadwalkers units (aka your skeletons and zombies) are going to get +1 to save rolls for the first battle round. That’s sort of useful – if nothing else it keeps them up long vs longer range attacks for a bit. And as the name implies, you’re ideally going to use this ability to setup your opponent with these units as the Vampires move into position… 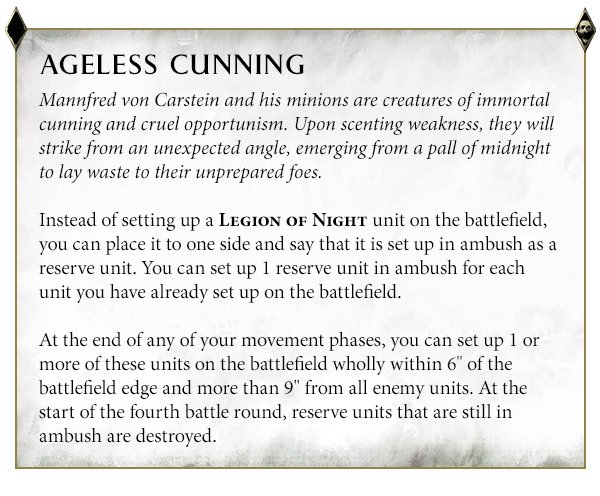 It seems the Kastelai aren’t the only ones getting an “ambush” option with their setups. Vampires are going to flying off the sides of the tabletop and right into the thick of things with the Legion of Night, too. Just keep that in mind when you’re playing them. 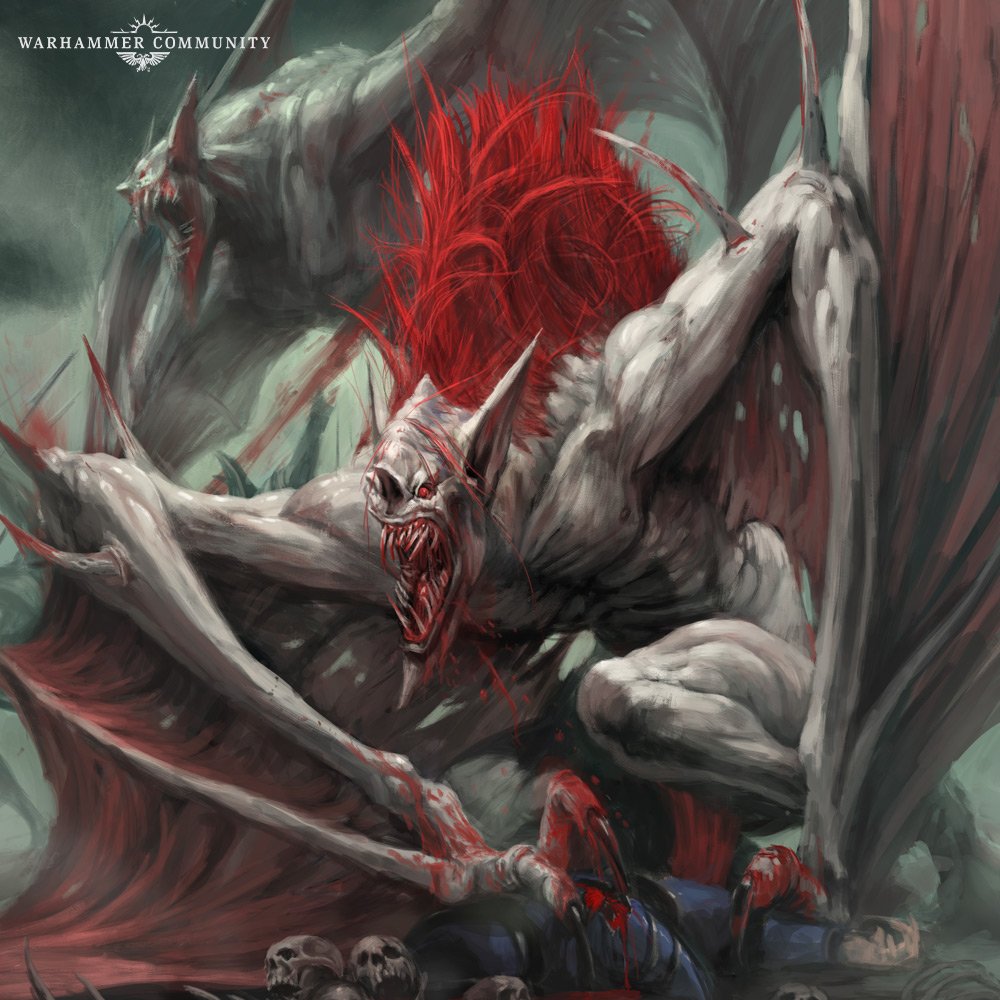 And if you really want something fast to come in from the sides, have you considered Vargheists? Because they will be Battleline units in a Legion of Night army. Fun times! 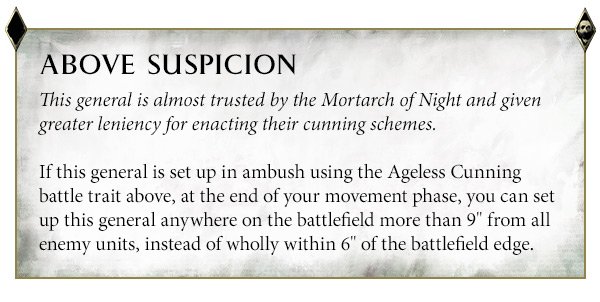 Alternatively, you can also setup your General in this “ambush” deployment and they can pop-up anywhere on the tabletop outside of 9″ of the enemy and they don’t need to be within 6″ of a board edge. Surprise Vampire or Vampire Surprise? The answer is yes.

The Legion of Night also has their own set of unique artifacts of power. One such artifact is the Gem of Exsanquination: 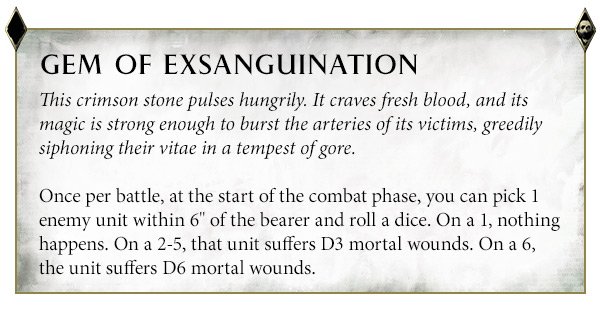 Everyone appreciates a little direct damage gemstone, right? As long as you’re not on the receiving end.

Being a the Legion of Night’s Mortarch has it’s perks, too. Mannfred is highly mobile on the tabletop: 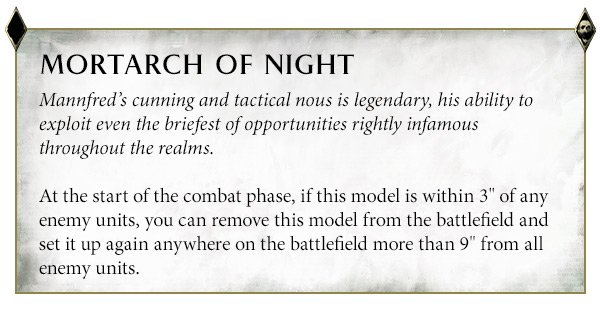 Just when you think you’ve got him locked down *poof* he’s off to the next fight. Or really, he’s off to avoid the round of combat where you have the priority. 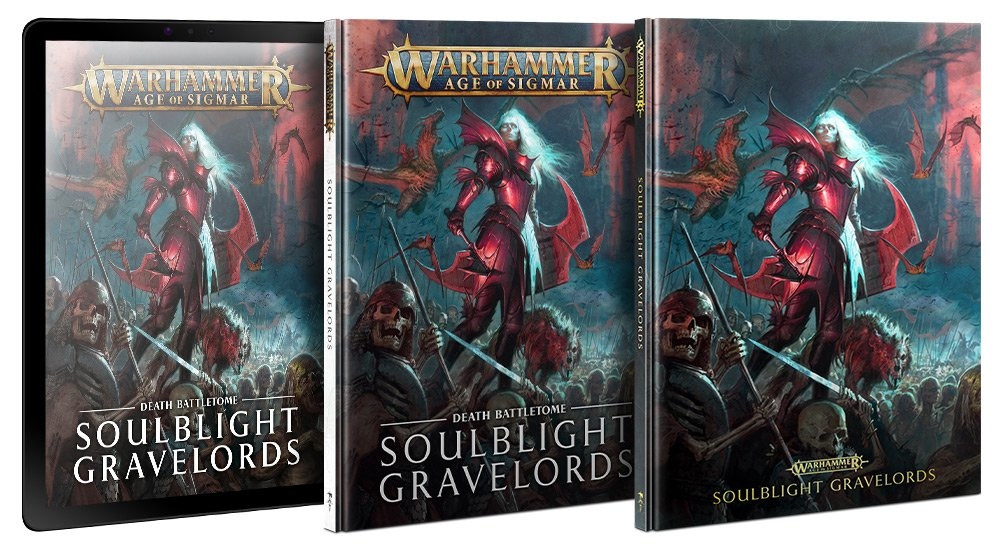 The Soulblight Gravelords are coming to pre-order this weekend! Are you excited about the Legion of Night?

Author: Adam Harrison
Writer, Editor, Texas Native, and Austinite for 15+ years, Adam covers all things Tabletop Gaming. Which includes Warhammer 40,000, Age of Sigmar, D&D, Board Games and everything else that involves dice, boards, cards and a table. A hobbyist, player, and collector of miniatures and games, Adam's current obsession are his Death Armies for Age of Sigmar, his Blood Angels and Tyranids for 40k, and his ever growing Arkham Horror: The Card Game Collection.
Advertisement
Age of Sigmar AoS Death Games Workshop Rules
Advertisement

Age of Sigmar: Four Things To Know About New Edition Ahead 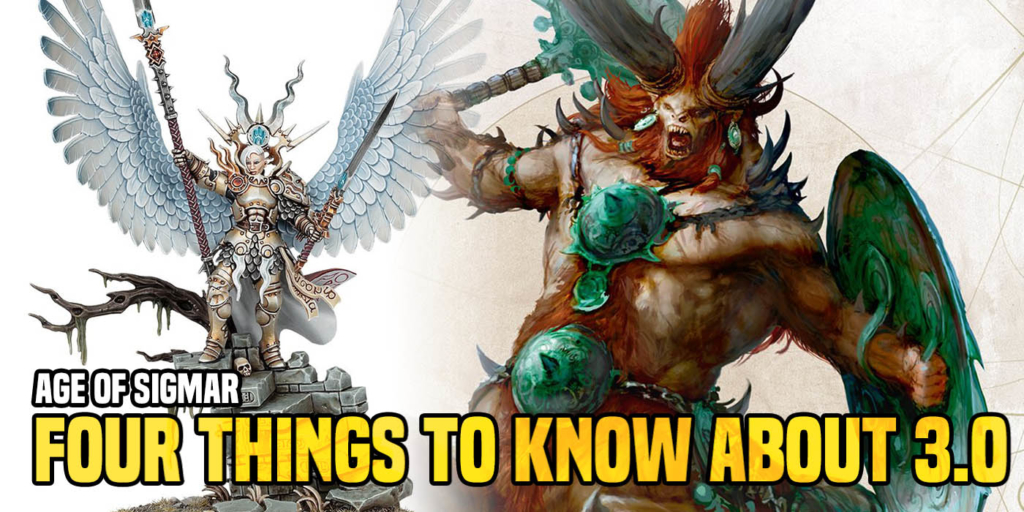