Do you like Squirrels and winning games of Magic: the Gathering? Then you’ll definitely want to check out the new spoilers for MH2.

More Modern Horizons 2 spoilers dropped today revealing the return of everyone’s favorite unstoppable critters–no not slivers, what do you think this is? Magic circa 2015?–we’re talking about squirrels. Whether you’re dealing with ravenous squirrels, mobs of them, or even their legendary general, there’s a lot to love about these critters, and you’ll get to see for yourself with the release of MH2. 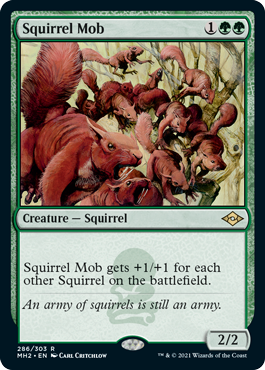 Naturally, they are a whole other deck in and unto themselves. Let’s start with the classic Squirrel Mob, which gets bigger and badder the more squirrels you have on the table. And that’s on the battlefield, not that you control. Not that it will necessarily come up all that often, but if your opponent is playing squirrels too, it’ll be great for everyone. 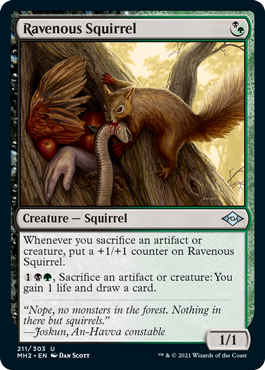 Then there’s the Ravenous Squirrel, which gets bigger the more it eats, and which can find more squirrels and life for you. 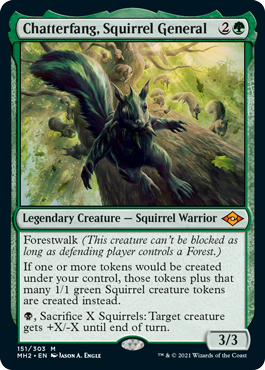 Of course, you’ll need a leader to control everything–and for that there’s Chatterfang, Squirrel General, who plays incredibly well with the other squirrels revealed so far. And with Forestwalk, your general will be getting where they need to be. 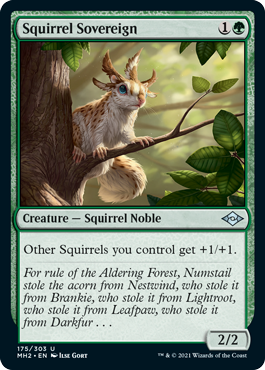 Of course, you might need the Squirrel Sovereign to truly rule. And for the rest of the squirrels in your forests you’ll need a leader in war and in peace. But no pack of squirrels is truly complete without their own haven… 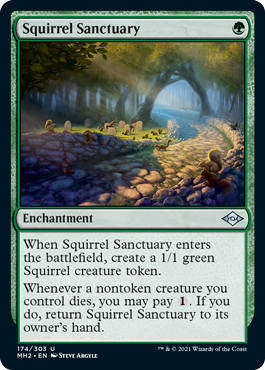 Which brings us to the Squirrel Sanctuary, which can turn any peaceful moment into a Squirrel token.

So gather your nuts and enjoy your hummingbird feeders undisturbed while you still can–for the squirrels are at hand, and there will be a reckoning. Coming soon in MH2.