Warhammer 40K: The Days Of The Mentor Legion 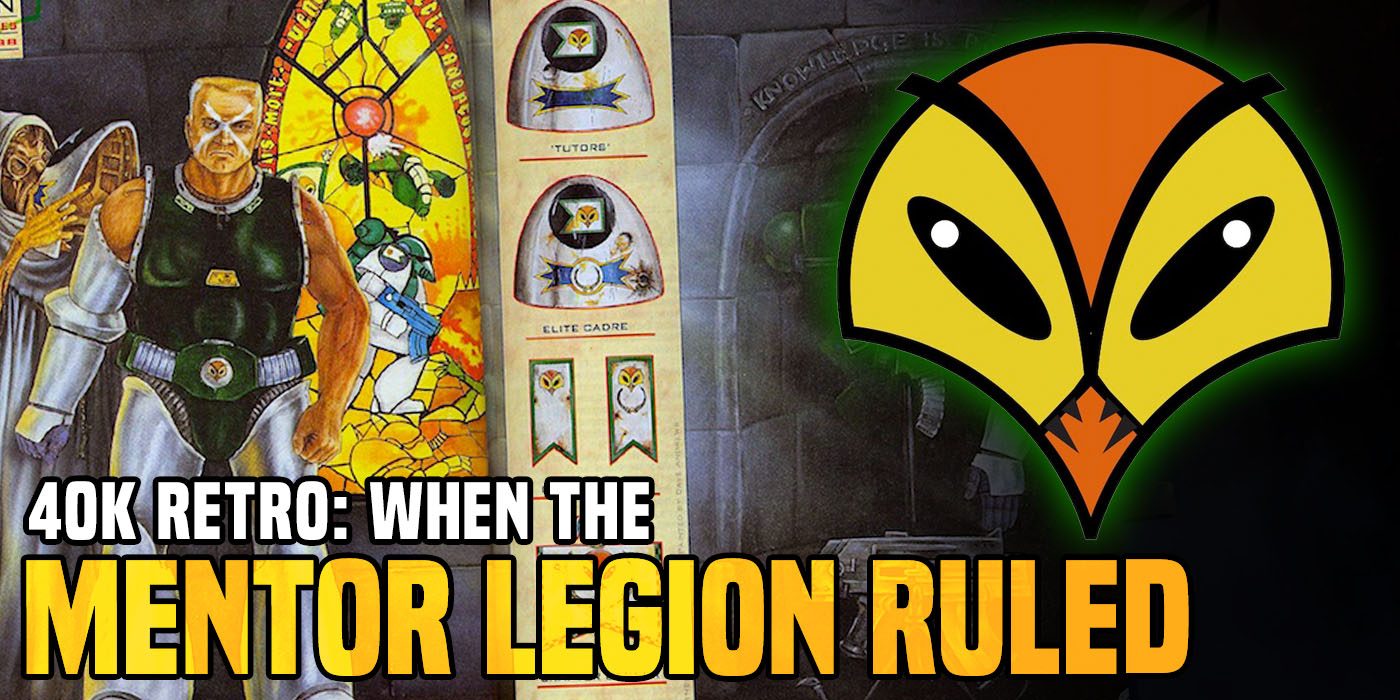 Back in the 1980s, a brand new game appeared called Warhammer 40,000 and the Mentor Legion burst onto the scene.

It was the very start of Rogue Trader and a growing Games Workshop was feeling it’s way through the very early incarnation of the game. It wasn’t even that grim or dark back then. Nothing was set in stone, and Space Marines were still very much being created month by month. There were no First Founding chapters – only this spread from the main book: 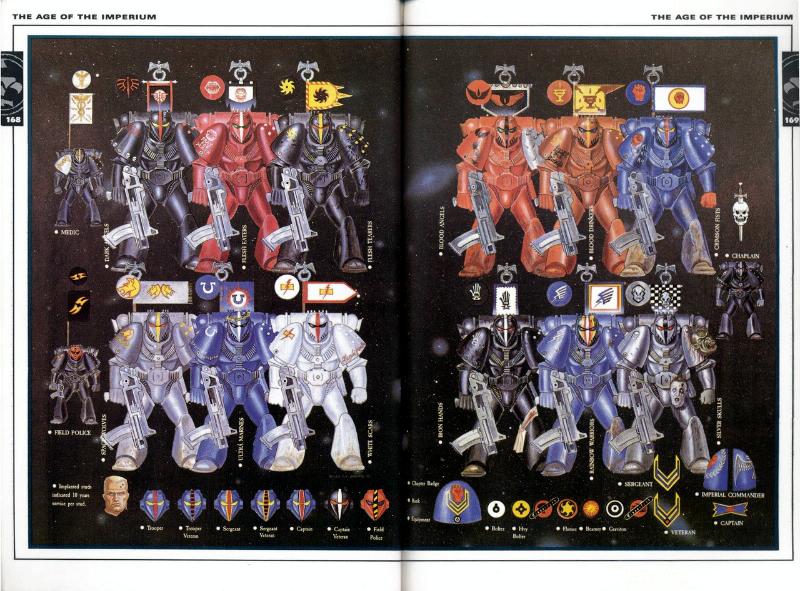 Back in February 1988, White Dwarf 98 came out – one month after the Ultramarines got their apocryphal initial writeup (more on that piece of madness later). It contained the second of the Space Marine chapters to get dedicated background and rules: the Dark Angels, Blood Angels, Space Wolves… Mentor Legion! 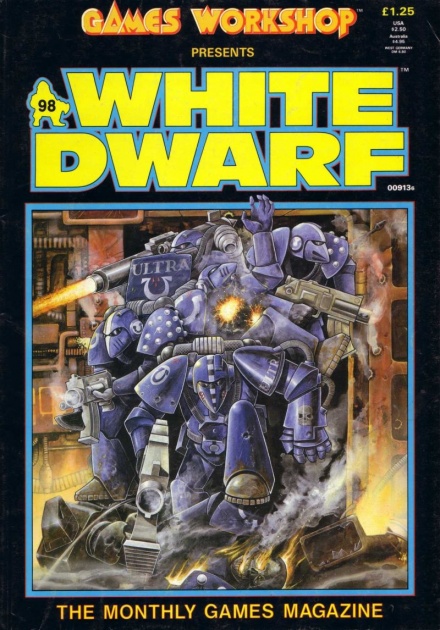 Yes you read that right. The MENTOR LEGION was the 2nd chapter to get dedicated background and rules in the entire history of 40K. They were really something special – something that the game would quickly sweep under the canon carpet and only hint at for decades to come. Take a look: 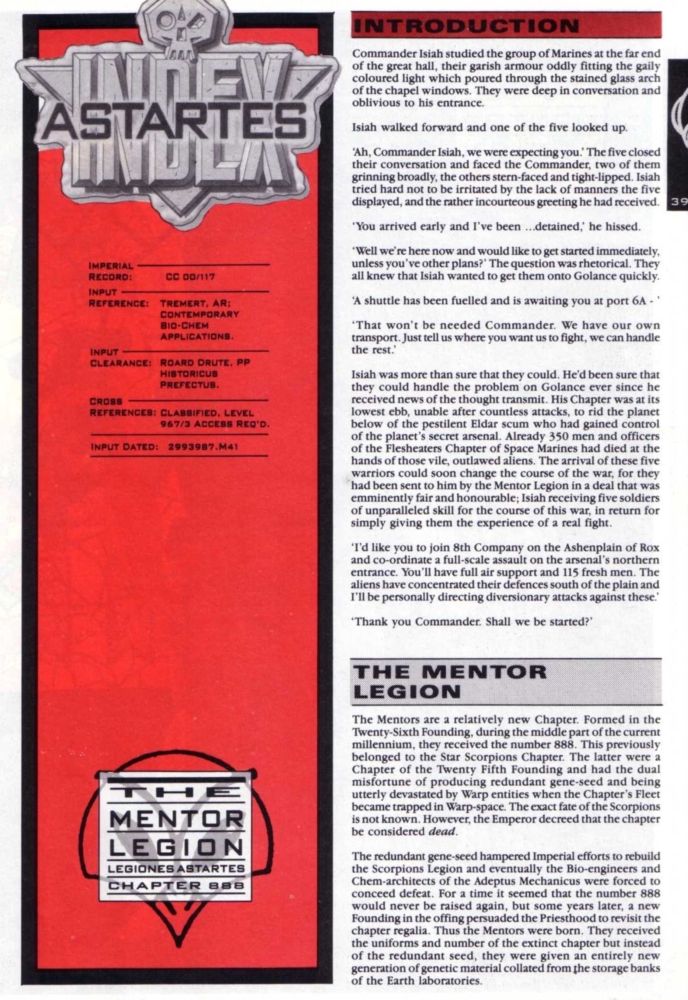 First off, the Mentors are Chapter 888 – pretty cool. They replaced a previously destroyed Chapter who filled that numerical spot and had a very unusual role and way of warfare. Read on… 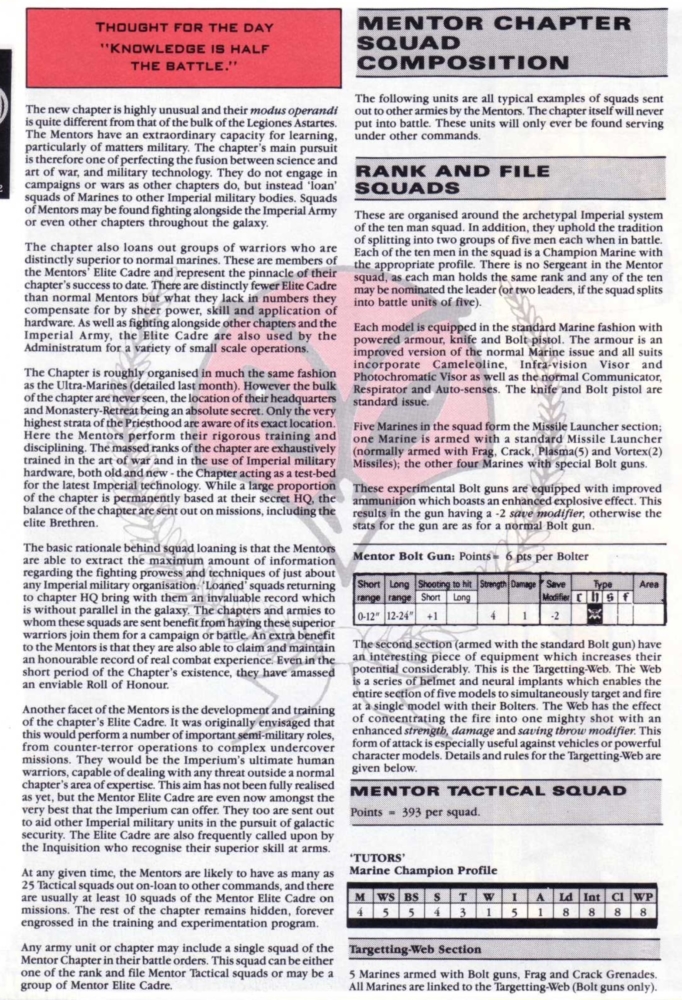 This is a LOT to take in. first off, like a proto-DeathWatch kind of thing, the Chapter operates in small groups scattered around the galaxy. They often break up and lead non-marine units – at a squad level! Next we start to get the heart of the Chapter’s unique role. They are equipped with and test out experimental weapons tech. We will go over all of these in turn, but the most basic is their superior Mentor Bolt Gun with an addition -1 to it’s AP due to it’s superior ammo. 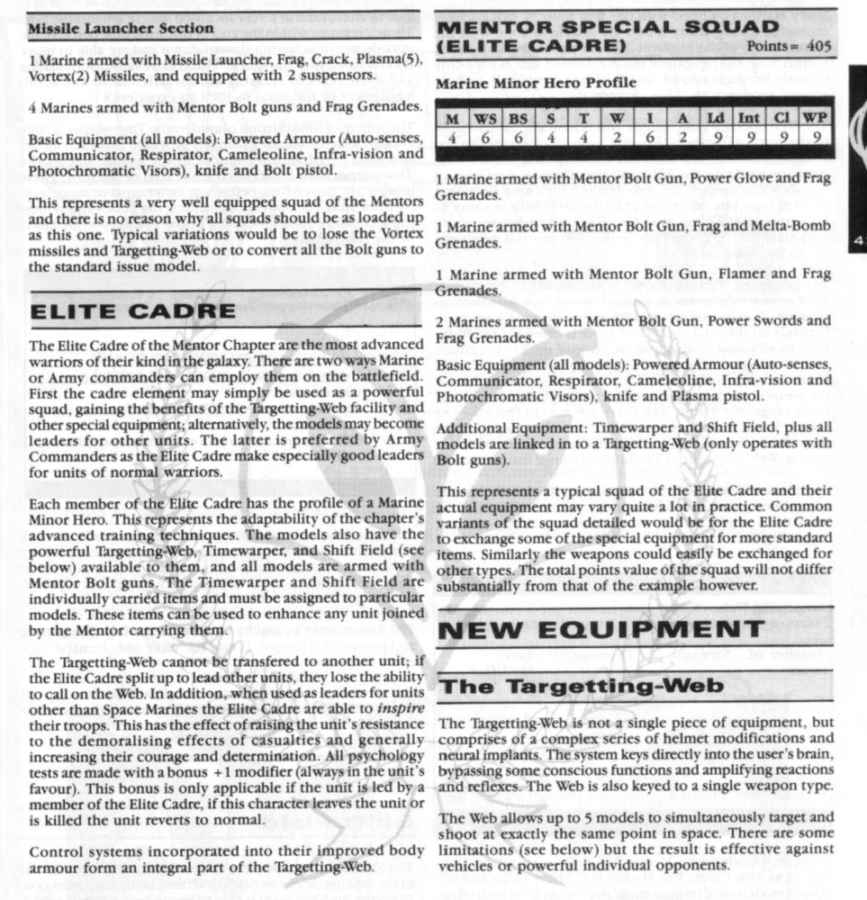 Just how superior are their weapons compared to standard marines? How about missile launchers that come equiped with 2 VORTEX MISSILES apiece standard! Then we hit the Mentor Elite Cadre squads. These squads can break up into individuals and be assigned as squad leaders to other Imperial units – including non marines! Onto their special equipment. 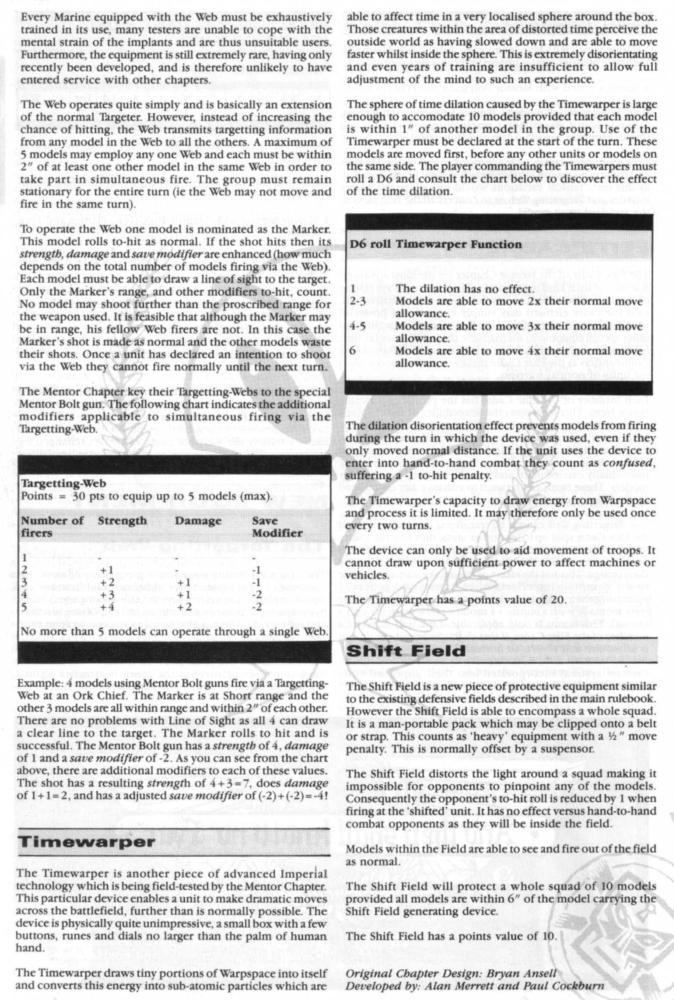 Let’s cover each of these in turn:

Targeting Web: You equip multiple models with this and when they fire on the same target, it increases the stats of their weapons based on how many fired at the target. The bonuses stack up fast!
Timewarper: This aura affect lets the bearer and his buddies exchange firing for a super move based on a d6 roll. Note that in general models moved really slowly in Rogue Trader and there were few ways to Deepstrike, Infiltrate, or move around the board quickly.
Shift Field: -1 to hit aura versus shooting. Not bad.

The Mentors had a unique appearance and owl chapter symbol: 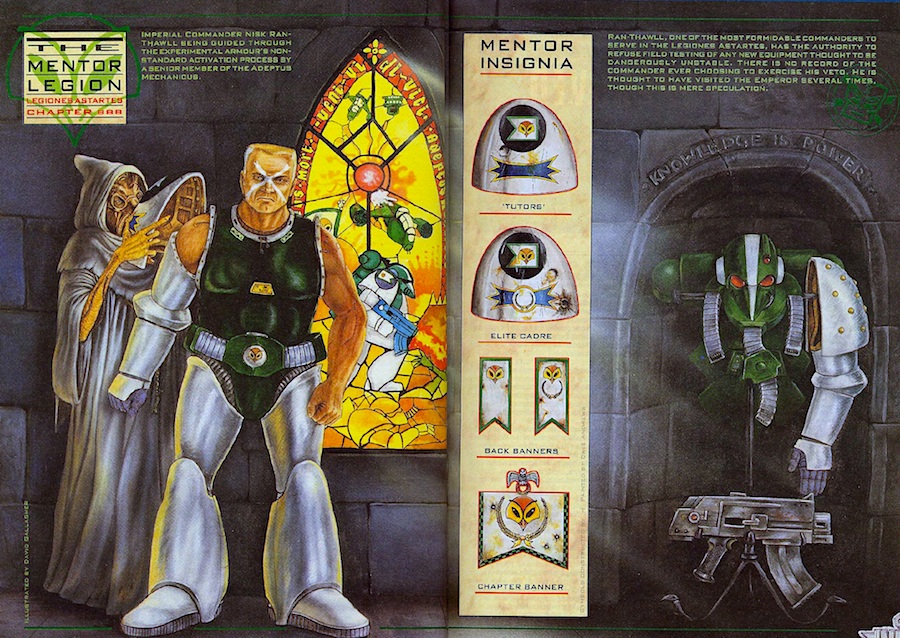 Note the unidentified flyer in the stained glass window.

I would argue that the Mentor Legion holds a special place in the history of Warhammer 40,000. They were the FIRST totally overpowered army in the game, a mantle that would be passed around freely for the next 30 years. In the years to come, GW would codify the Space Marine army list, and start cranking out variant after variant that would survive to this day. The “important” First Founding chapters would be defined and fleshed out slowly but surely.

The oddball Mentor Legion just didn’t fit in the new Grimdark and were forgotten, never to receive rules again. As a hat tip to tradition, they would appear in various Space Marine codexes with a hazy unknown past that hinted at their original fluff. They got an updated red avian logo, and even appear as recently as 8th Edition in Primaris form. 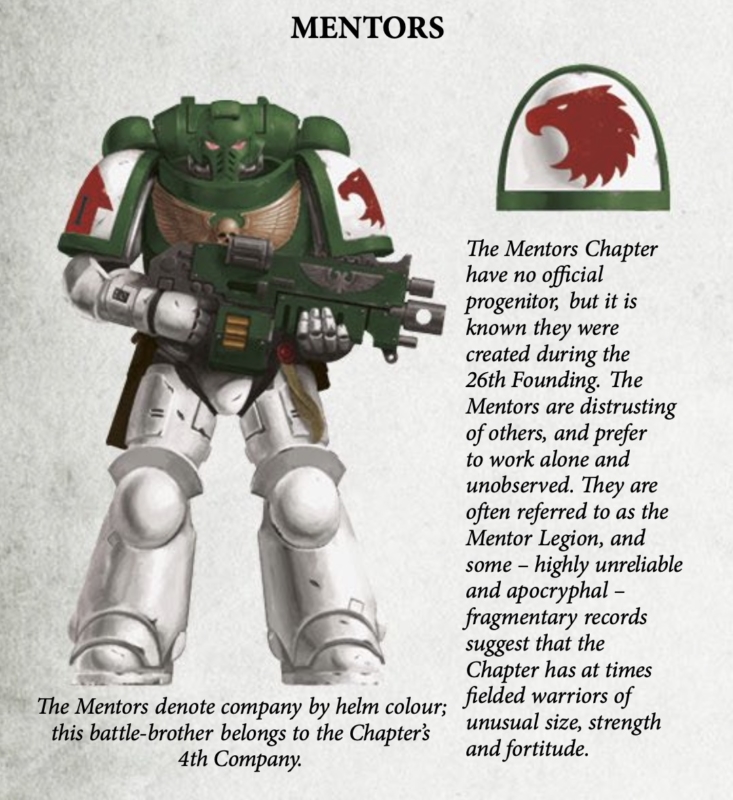 ~ It would be a grand gesture for GW to give the Mentors a writeup with one page of rules in a White Dwarf. They have patiently earned it.