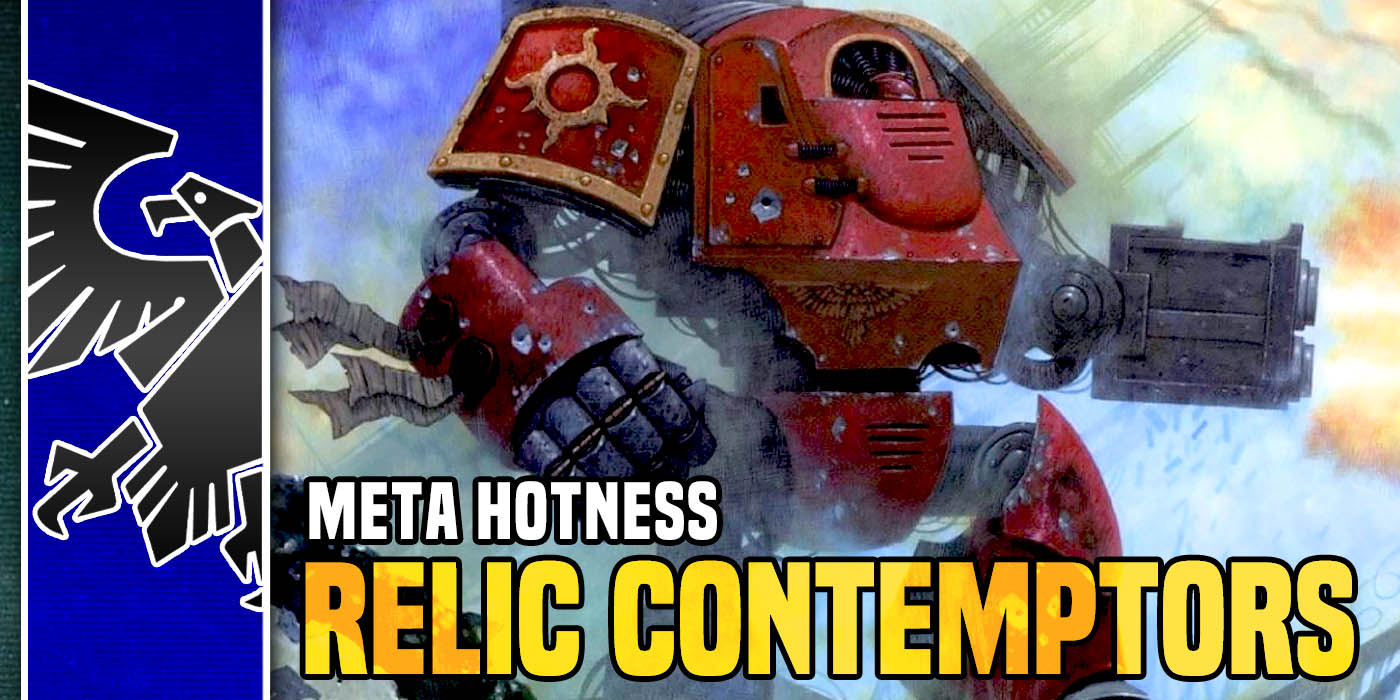 Let’s take a look at a unit that is showing up as one of Warhammer 40K’s top units, Relic Contemptor Dreadnoughts. 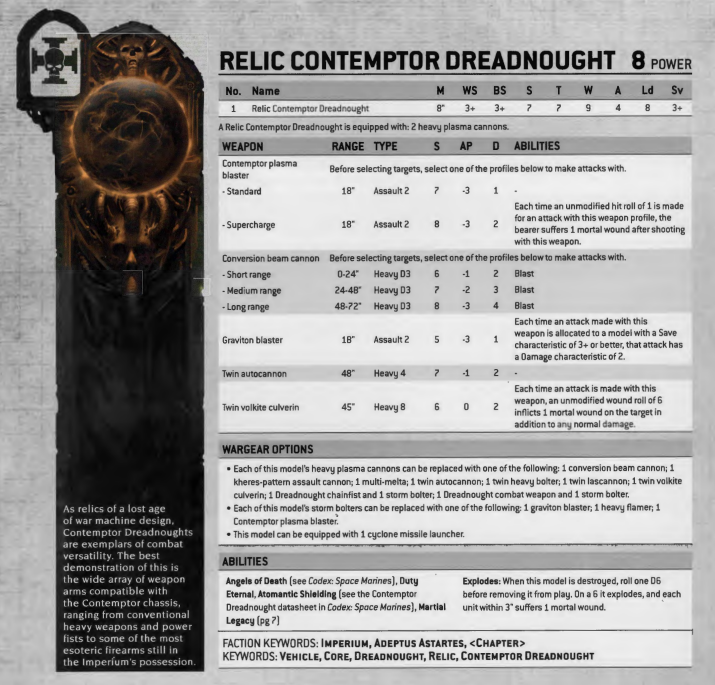 This week’s hot unit is the Relic Contemptor Dreadnought. This Forge World unit is is an upgraded version of the basic Contemptor Dreadnought found in Codex Space Marines. It’s a heavy fire support unit with a variety of weapons options. While it can be built for close combat, as a holdover from the Horus Heresy it has access to a number of exotic ranged weapon options not found on other units in the Marine list. 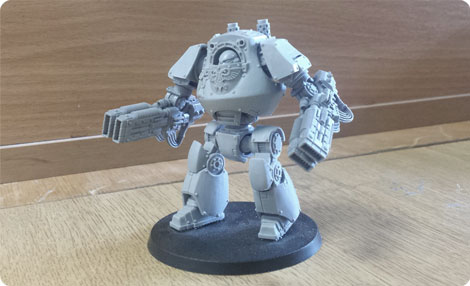 Like all Marine Dreadnoughts the Contemptor got a huge boost in the 9th Edition book. These guys are a tough, mobile vehicle, that can throw out a good amount of firepower. With T7, 9 Wounds, -1 damage to attacks and 3+/5++ they are a tough nut to crack and harder to kill than most other vehicles in the game. With a relatively small footprint they are great for pushing forward, and you can fit a lot in Auras. Speaking of Auras as they are Core the Relic Contemptor gets access to a ton of Marine buffs. The inclusion of a Techmarine can not only boost their shooting, but keep them repaired and in the fight longer. 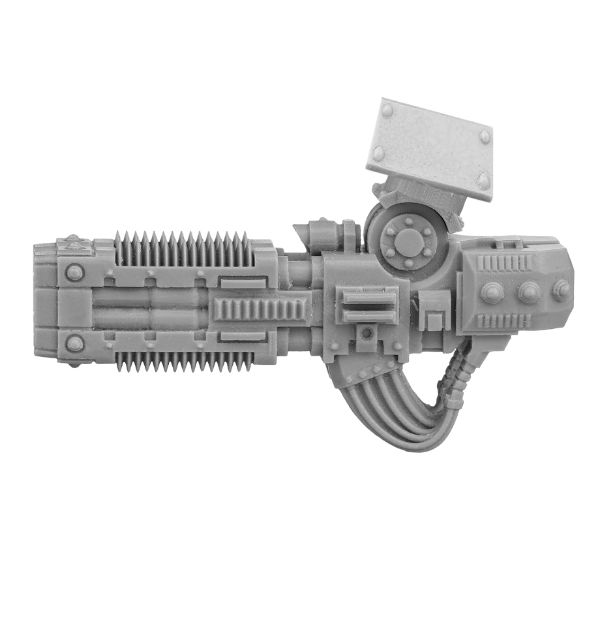 While the Relic Contemptor has access to a lot of weapon options, the hot way to run them right now is with a pair of twin Volkite Culverins. Combined this gives the model 16 high S, D 2 attacks. With a 45″ range and move 8, they can pretty much hit anything on the table. 16 shots mean the model is good at plowing through large numbers of weak infantry with ease. However it also doubles at being useful against other important targets. D2 means it’s a viable anti- Marine gun, and while its low AP holds it back, the Marine book has a few ways of buffing that. 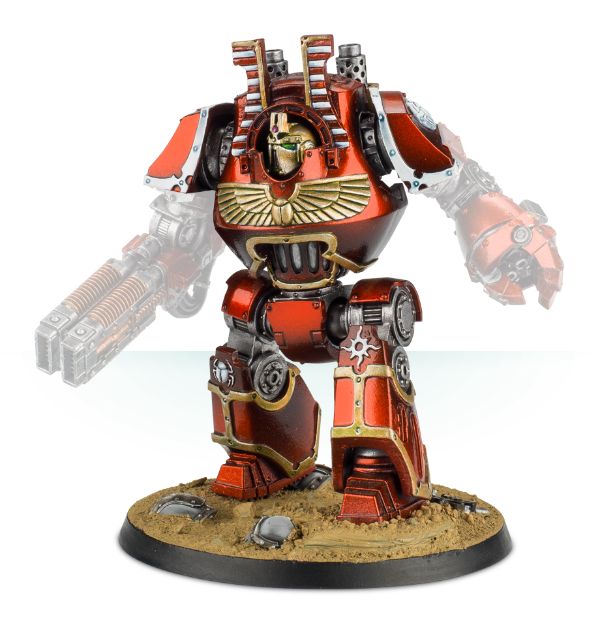 With the large number of shots you get, and some free mortal wounds, it can still put the hurt on a Marine unit. It’s also a pretty good gun, due to volume of fire and D, for taking down Drukhari Raiders, one of the scourges of the Meta right now. Unlike other anti-tank guns, it can then switch to killing the passengers with ease. Overall the gun is a very good jack of all trades weapon, mounted on a tough and affordable unit, making it a great pick.

Saying a unit is hot is all well and good, but let’s take a look at how players are using it. Contemptor Dreadnoughts have started showing up in a number of lists that have really dominated at recent tournaments. No less than 3 lists that hit top 4s in the past week contained two of them.  One list that highlights them is the list that Colin Sherman ran to win the Weekend At Horus’ GT. (via 40kstats.com) 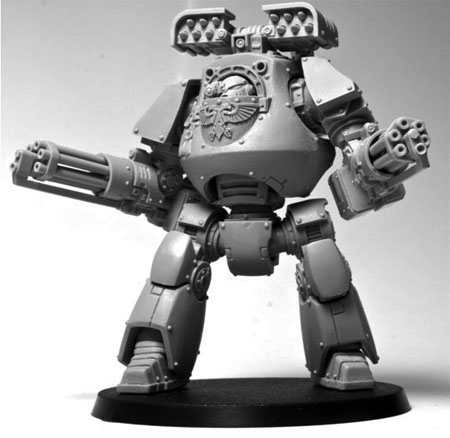 This list makes use of two Relic Contemptor Dreads, each armed with a pair of twin Volkite Culverins. These guys are tough and put out a lot of firepower between them. Paired with the Invictors and Redemptors they make for a massive block of hard to kill, high damage output walkers. The list, Contemptprs included, really goes all-in on mid-high S, D2 attacks. This makes it a very good at taking down some of the current meta threats like Marines and Dark Eldar (Raiders won’t have a ton of fun here), but could leave it a little more vulnerable to really heavy tanks. Storm of Fire on the Captain can help buff AP on the Contemptors, while Rites of War on the supporting Techmarine makes them Obsec. This allows them to help push lighter enemy units off objectives and hold them. Overall it makes a lot of use of the Contemptor’s high rate of fire to build a scary list in the current meta.

Author: Abe Apfel
Abe is that rare thing, an Austin local born and raised here. Though he keeps on moving around, DC, Japan, ETC., he always seems to find his way back eventually. Abe has decades of experience with a wide range of tabletop and RPG games, from historicals, to Star Wars to D&D and 40K. He has been contributing to BOLS since almost the start, back when he worked at and then owned a local gaming store. He used to be big into the competitive Warhammer tournament scene but age has mellowed him and he now appreciates a good casual match. He currently covers 40K tactics and lore, as well as all things Star Wars, with occasional dabbling in other topics. Abe remains in mourning over the loss of WFB to this day.
Advertisement
Armylists Rules Space Marines Tactics Warhammer 40k Warhammer 40K 9th Edition
Advertisement 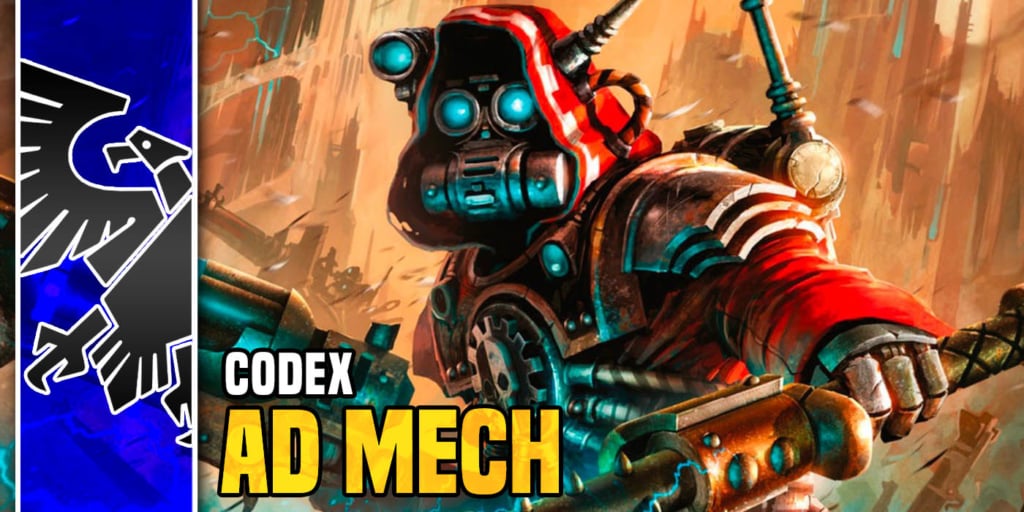