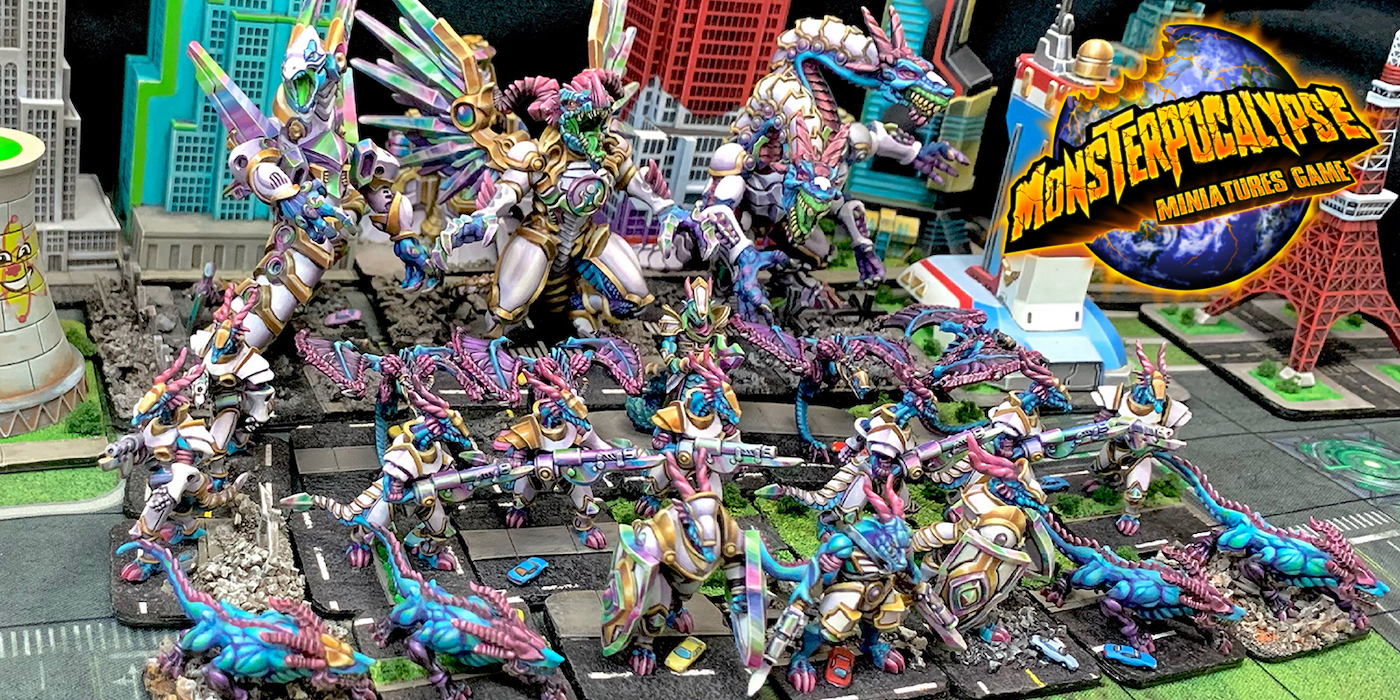 Dragons from outer space are here to protect planet earth from the Monsterpocalypse! And if they cause a little collateral damage well… 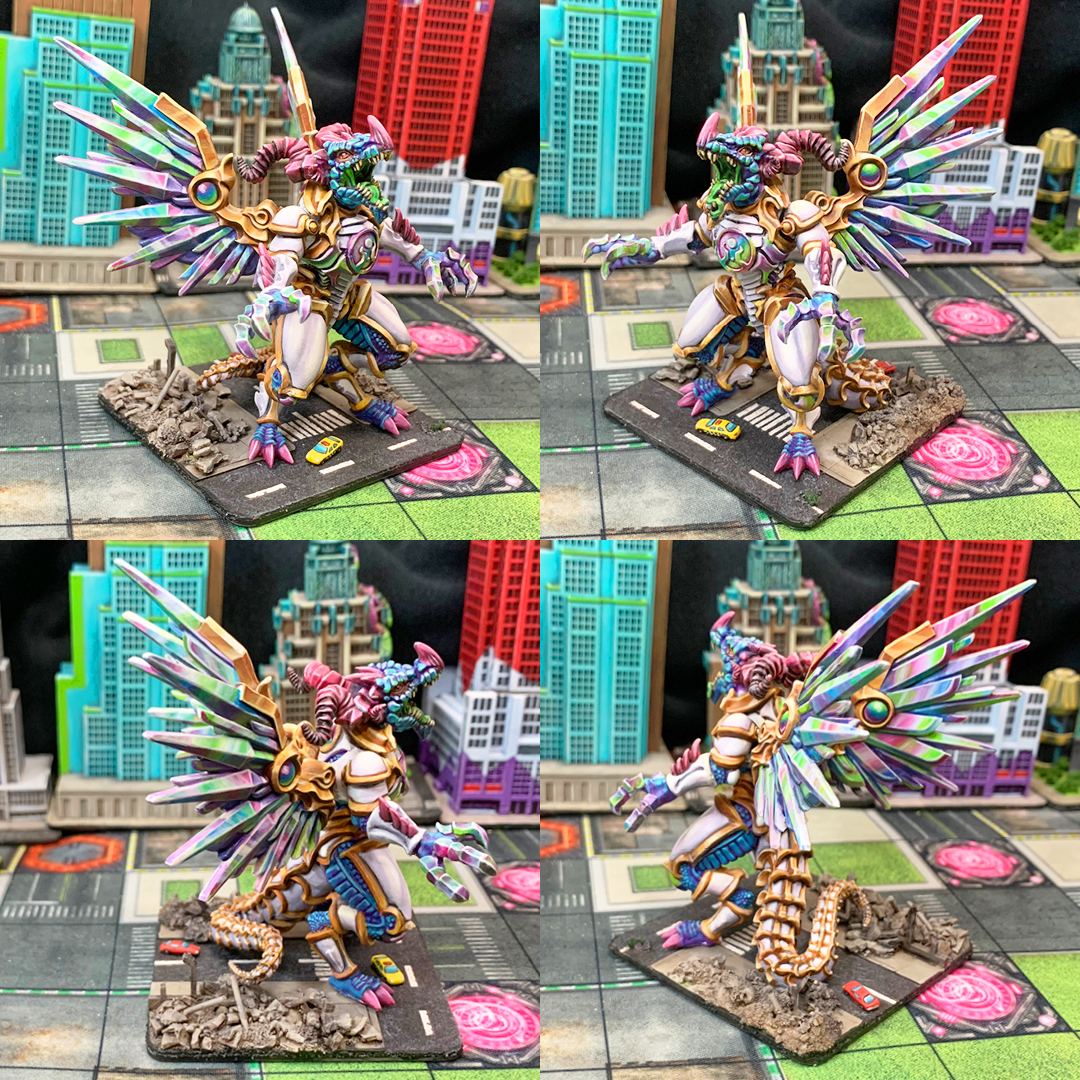 Rastaban was the first Draken monster released and the first I painted. I went with a white and gold color scheme because those are both colors you see in space suits. The rainbow “crystals” were inspired by toys I remember from growing up that had iridescent effects on them. 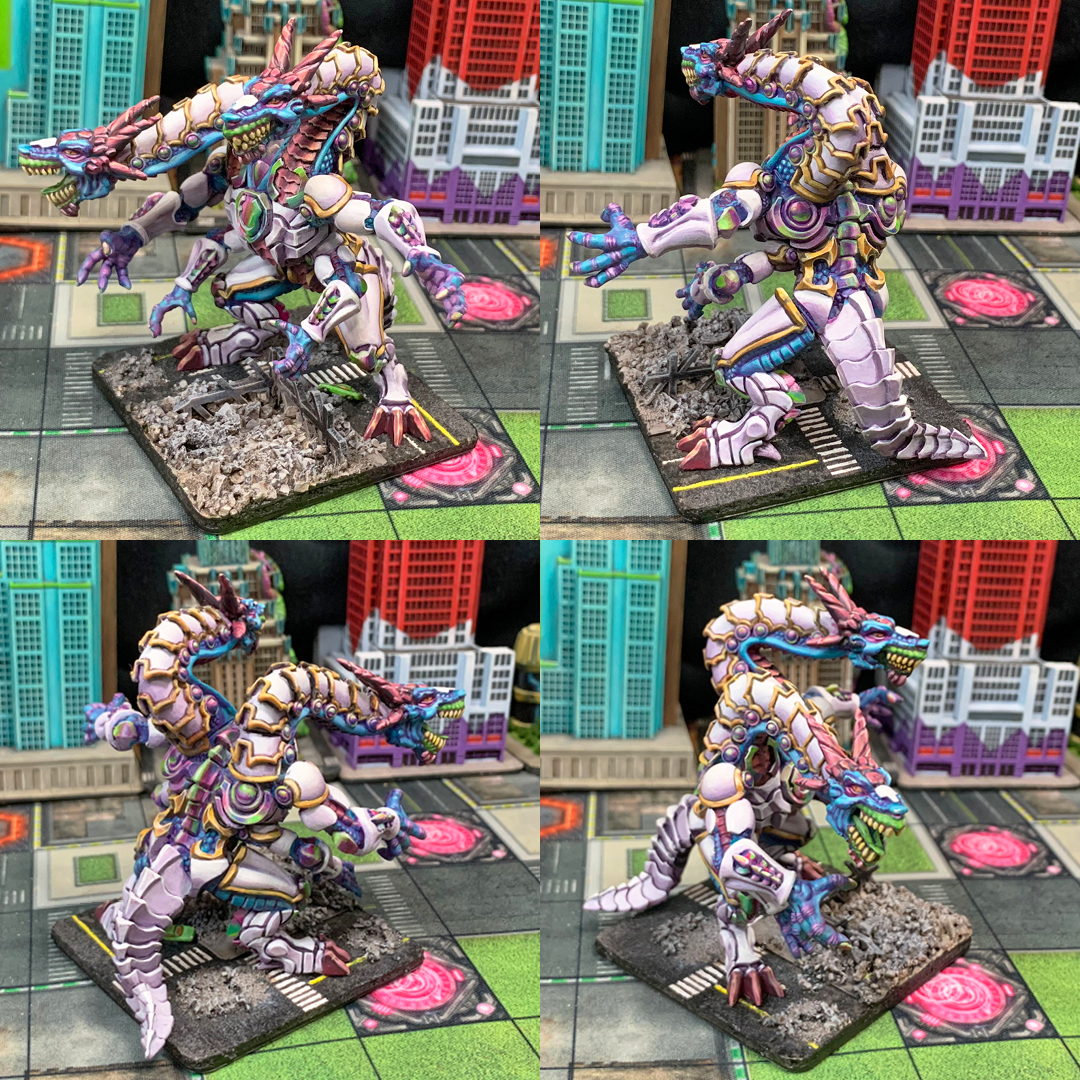 This multi-limbed monstrosity is Zybanos. 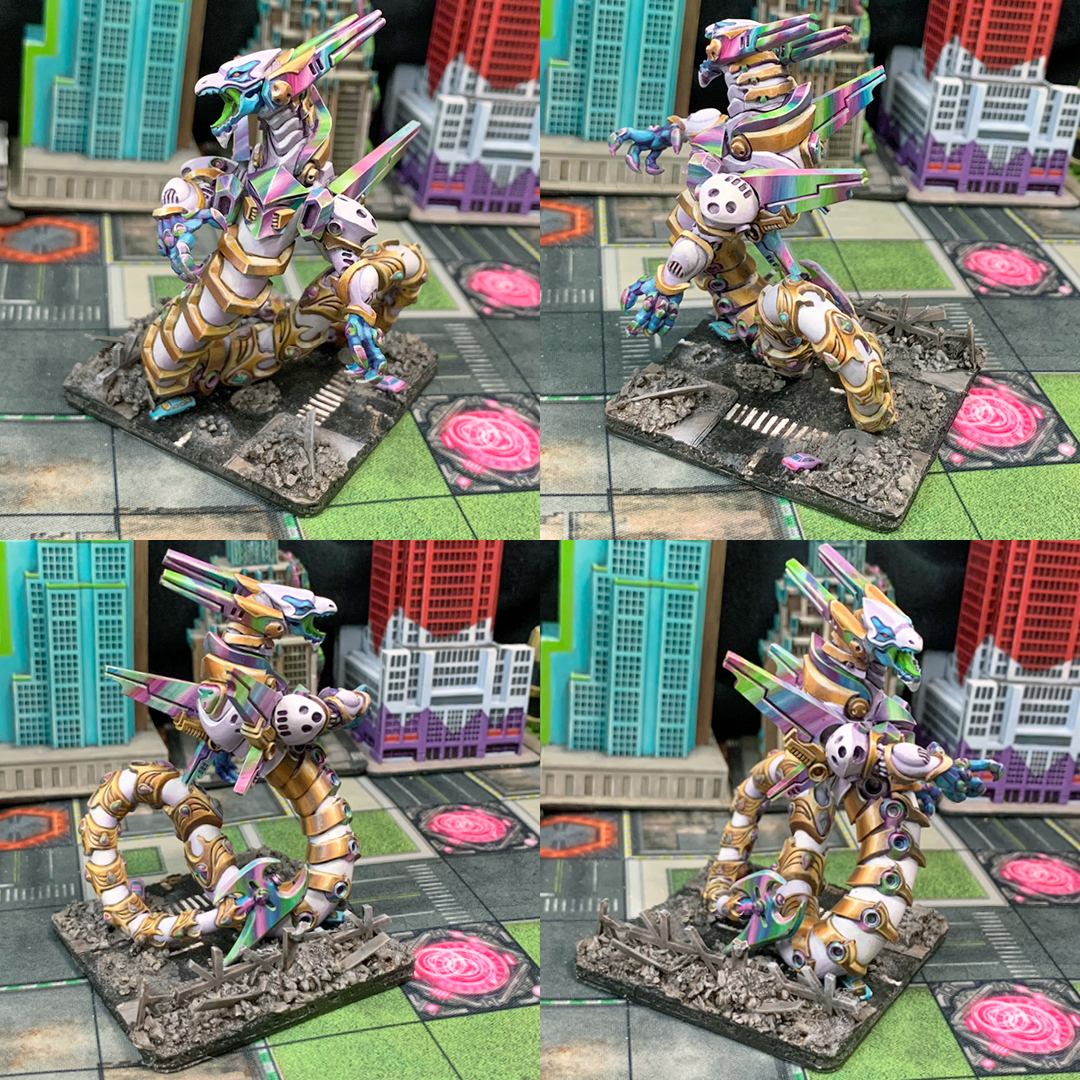 Last up we have the serpentine Gausamal. 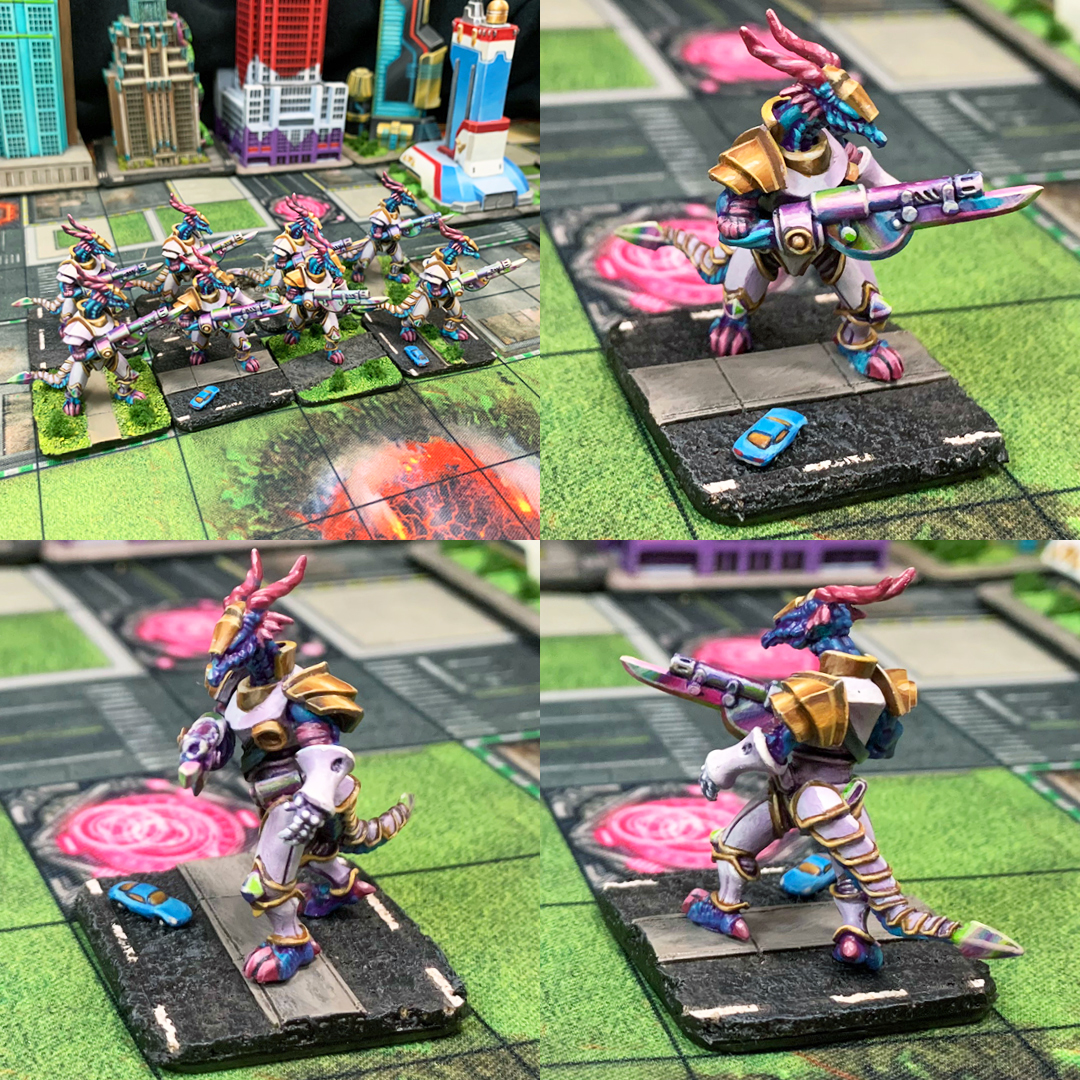 The Draken Fusiliers are the rank and file of the Draken Armada. As good as they are, I don’t now if you need eight of them. I like to have enough units from every faction to be able to play a game with only faction models so I doubled down on these. 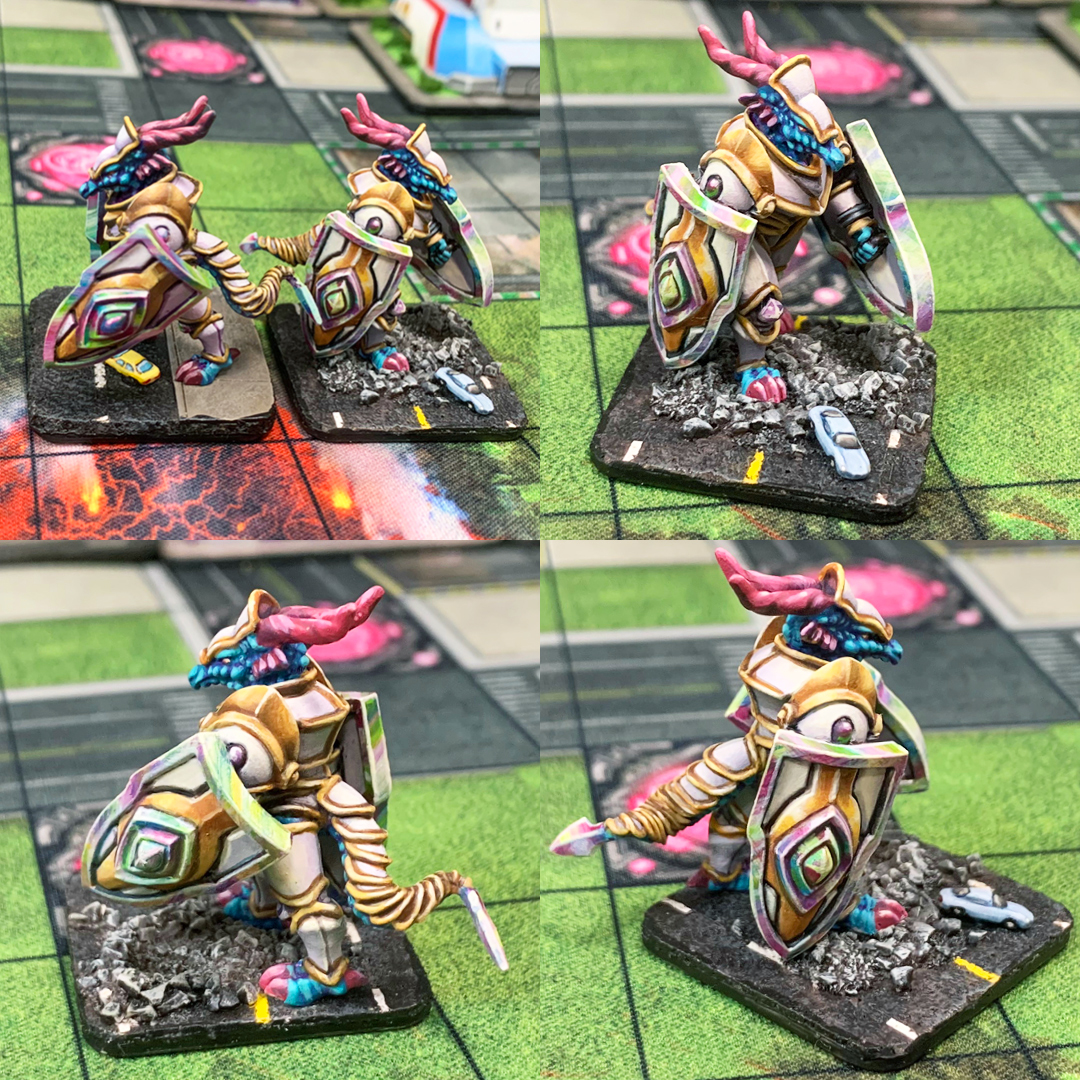 The Fusiliers come with these extremely useful Wardens too. 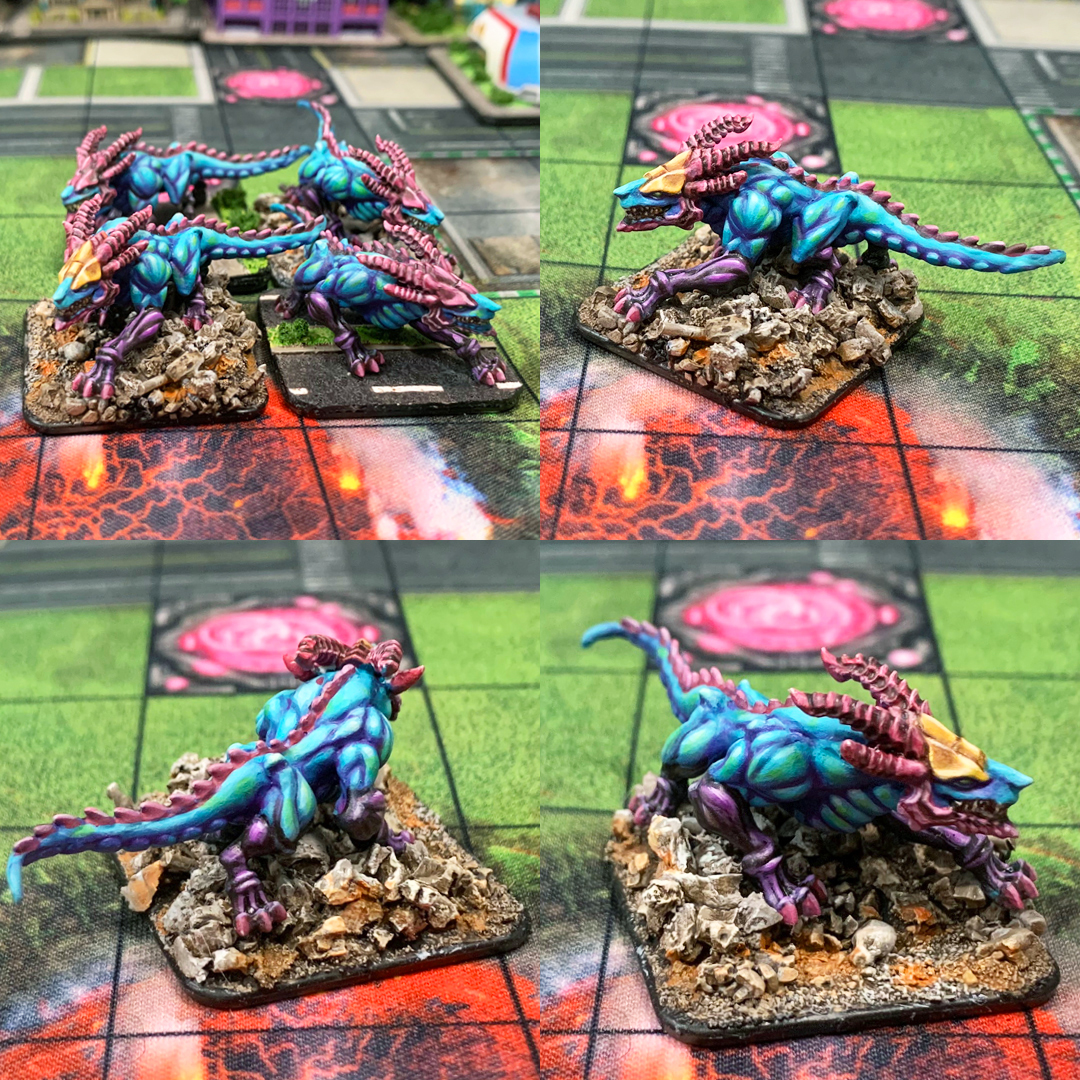 The Coursers are the Draken’s standard close combat unit. 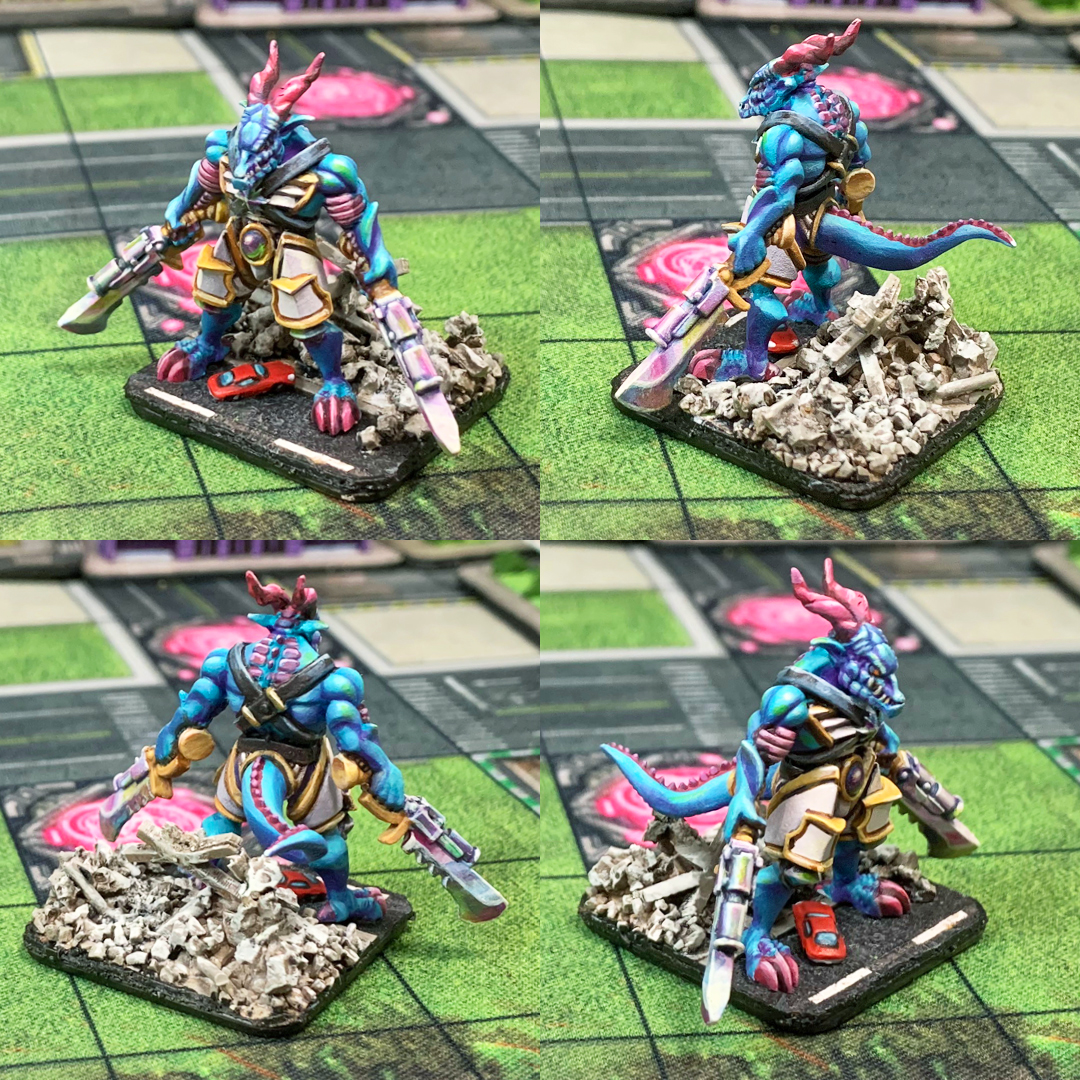 The berserkers are great against units but can’t combine attacks, so aren’t very useful against monsters. 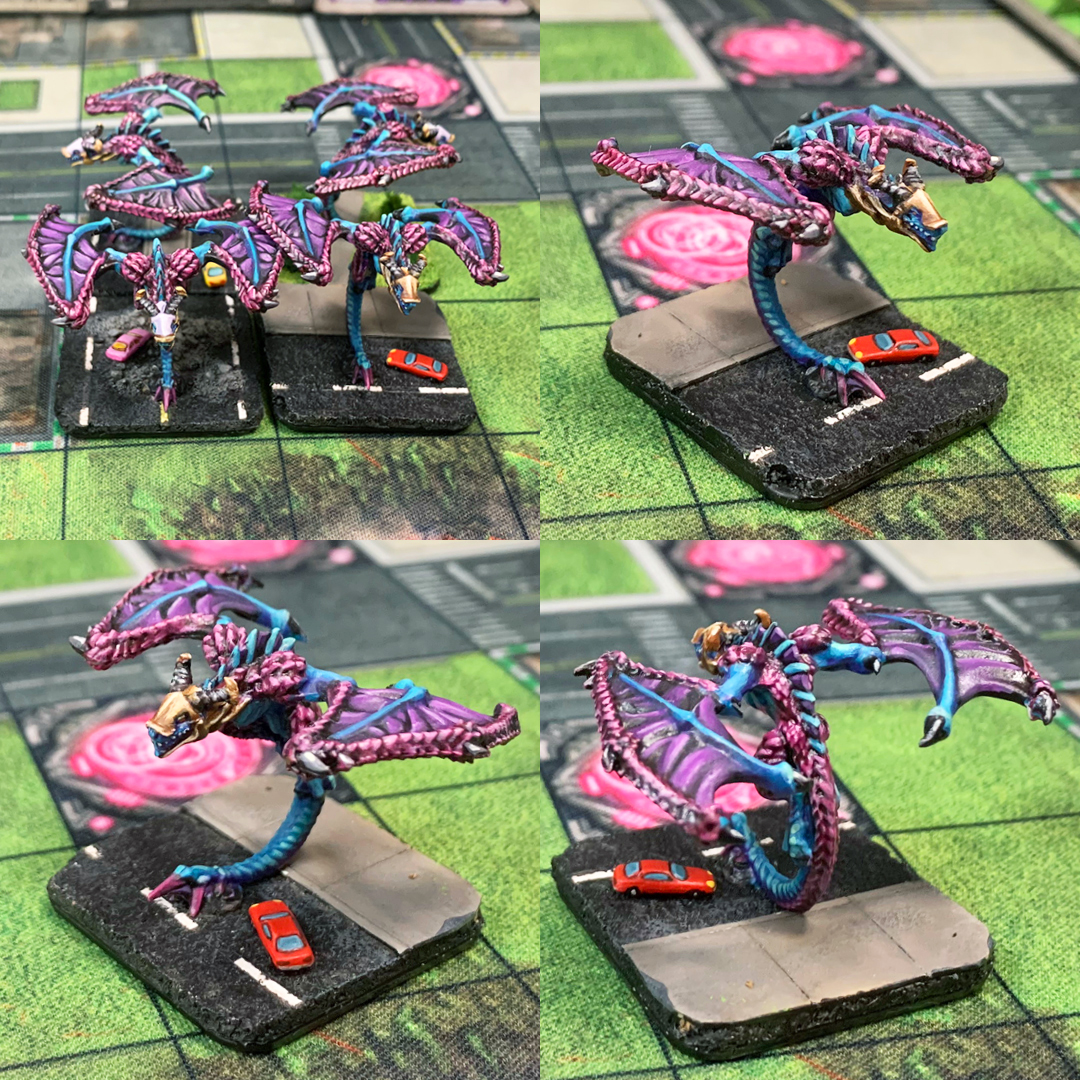 The Stalkers are flyers that can make blast or brawl attacks. 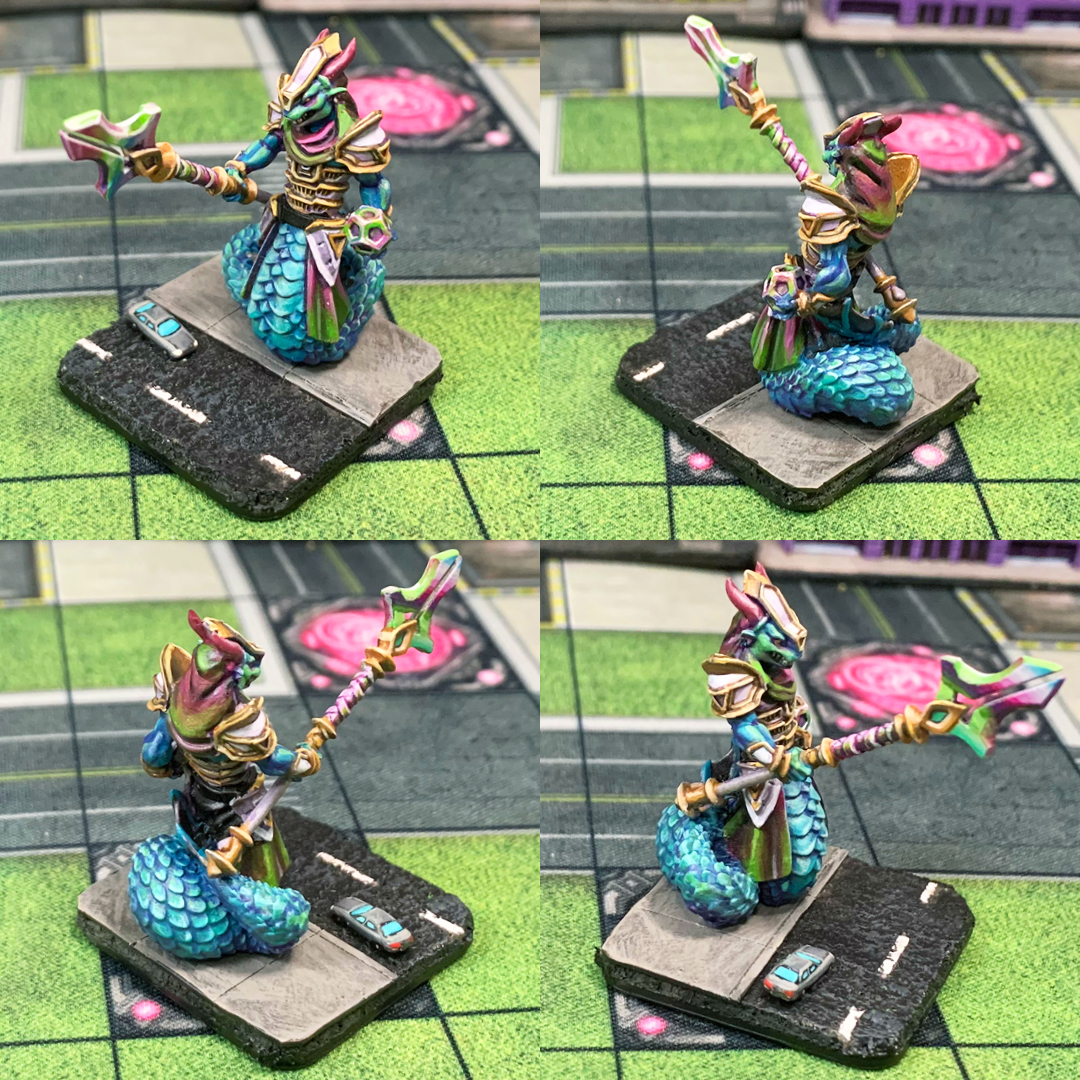 The Mystic is a really helpful buffing unit. Hopefully, Privateer will go back to selling unit singles because I’d love to be able to get another without having to pay for the four Stalkers that come with it. 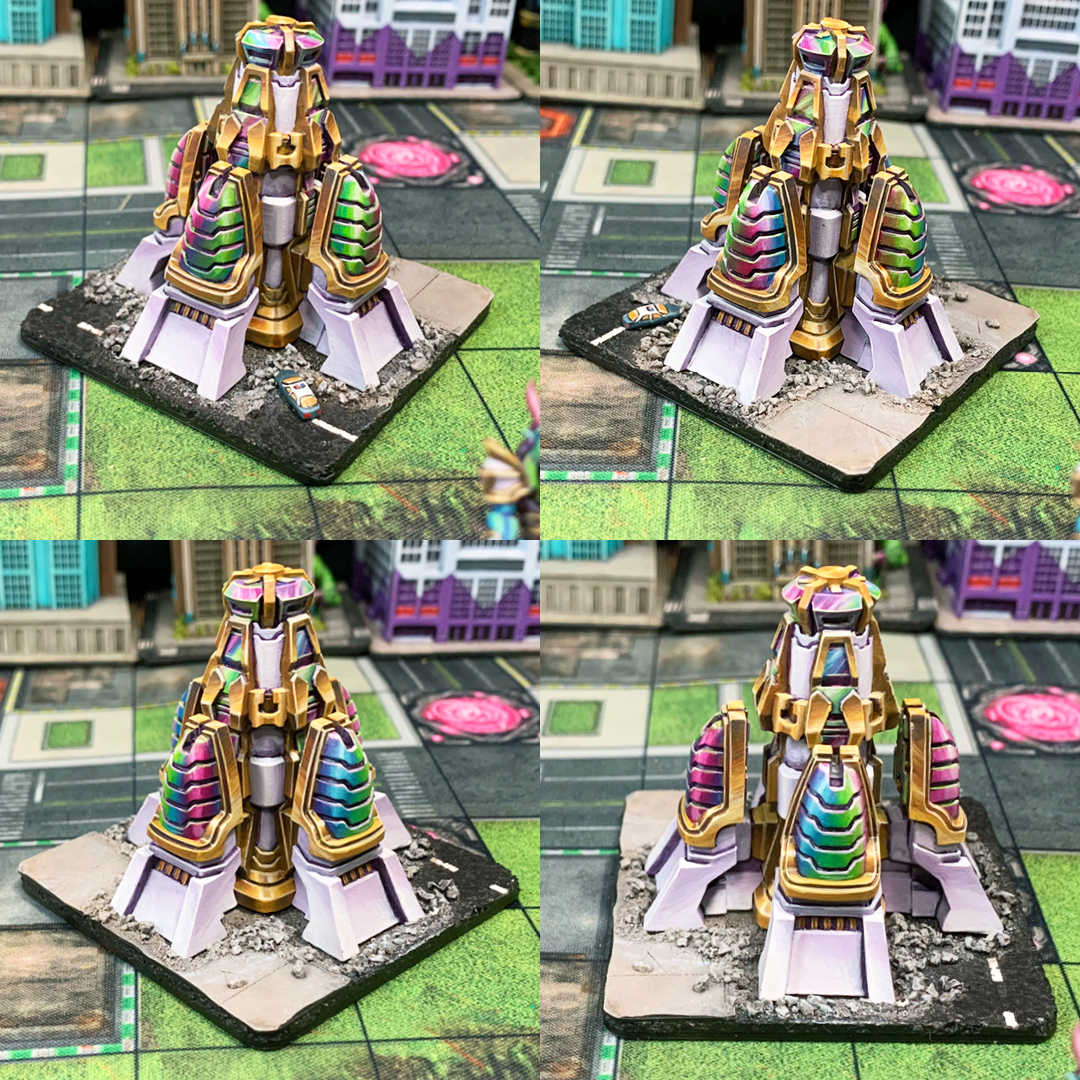 The Bastion lander is definitely one of the more interesting buildings in the game. As a “lander” I decided to model the base as if the thing had plopped down right in the middle of a big city. 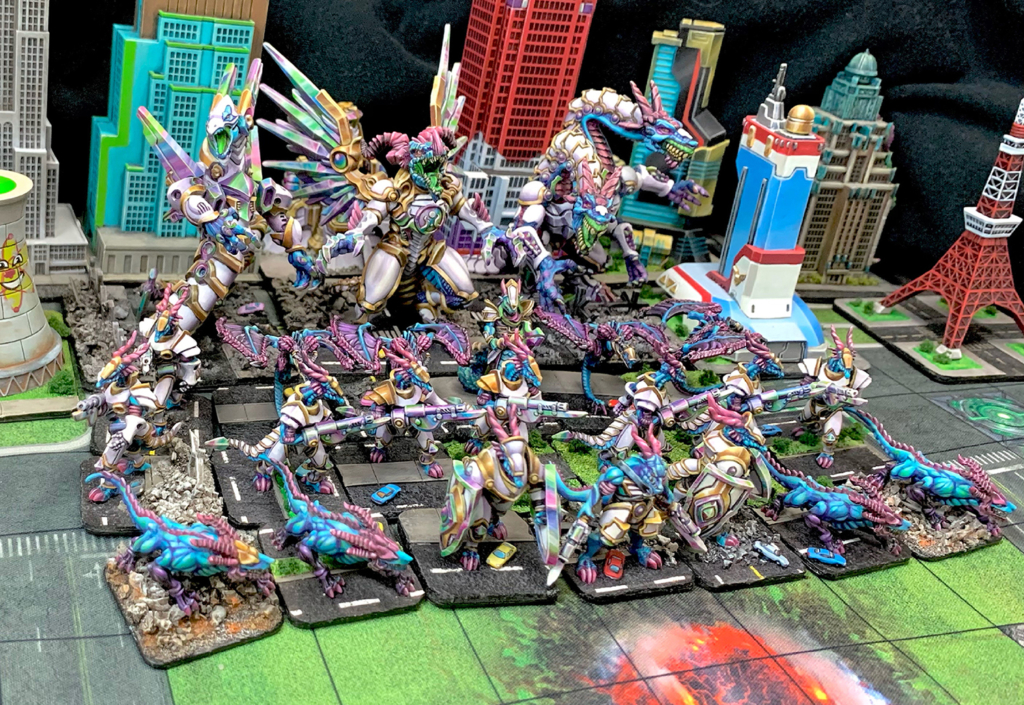 Painting all those iridescent effects was fun but I think this faction definitely took more time to finish than any of the others I’ve done. Still, I’m extremely proud of how they all turned out! If you enjoyed the article check out my blog. I don’t post there much anymore since Facebook and Instagram don’t let me share the posts for some reason, but there are still a bunch of tutorials there you can read. If you want to see what I’m up to day-to-day, you can follow me on Instagram where I post as t00mini.

~What do you think of these Space Dragons?!

Author: Ben Williams
Ben Willimans is a Professional Painter and Columnist at Bell of Lost Souls. He has been involved in the hobby and art side of miniatures and the tabletop gaming industry for over 20 years. He has won multiple national painting awards.
Advertisement
Hobby Miniatures Monsterpocalypse Painting Privateer Press
Advertisement