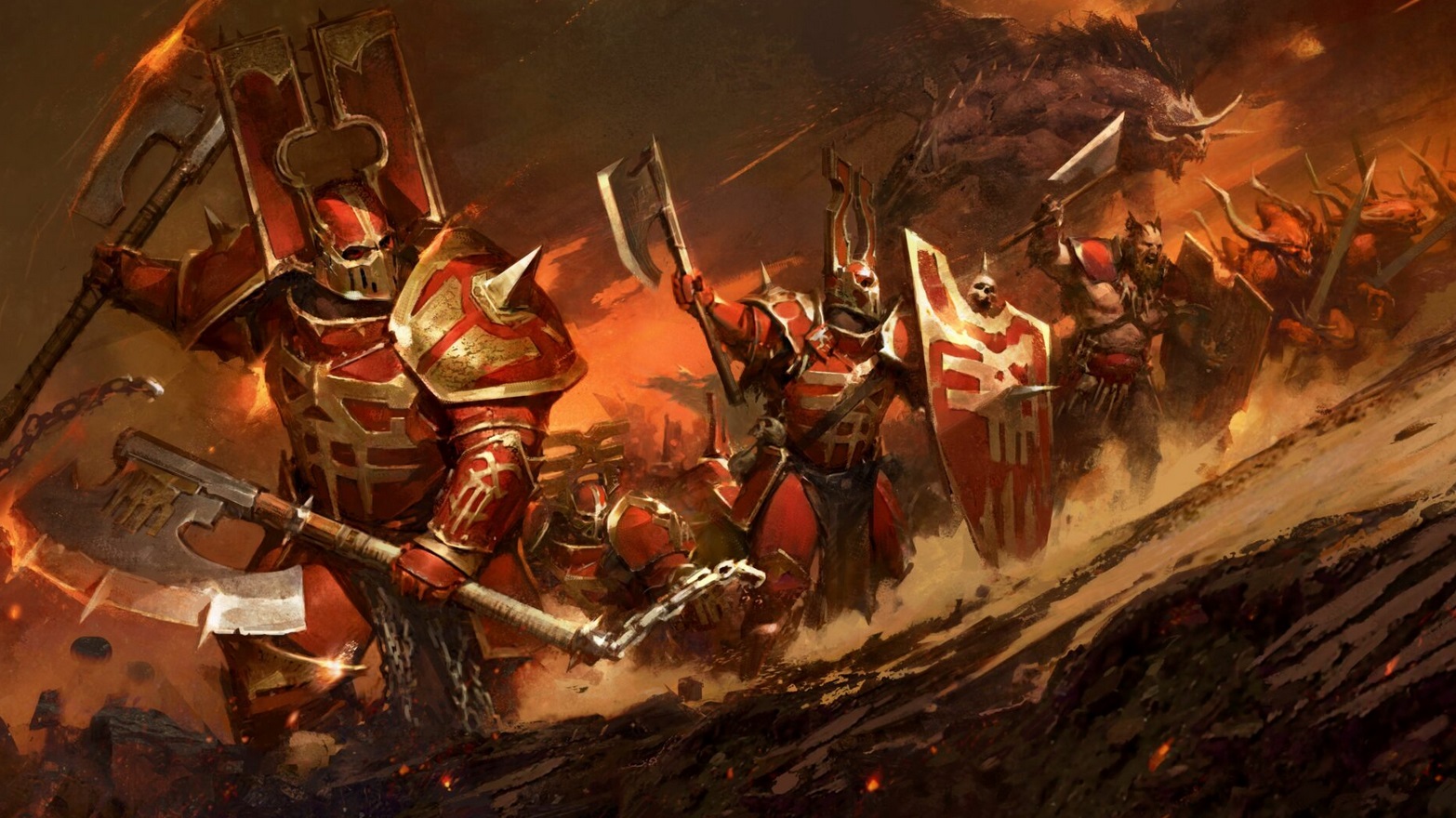 Khorne’s forces are large, angry, and, as their roster in Total War: Warhammer III reveals, absolutely ready to charge. See what daemons lurk within!

Khorne has his sights set on Kislev in the upcoming Total War: Warhammer 3, presumably to turn it from Kislev in to Khislev. Plus bear skulls will look pretty good on the ol’ skull throne. Now let’s check out how Khorne’s forces will claim all of that blood for the blood god by looking at the roster for Khorne’s forces in Total War: Warhammer 3. First up, the Legendary Lord, none other than Skarbrand. 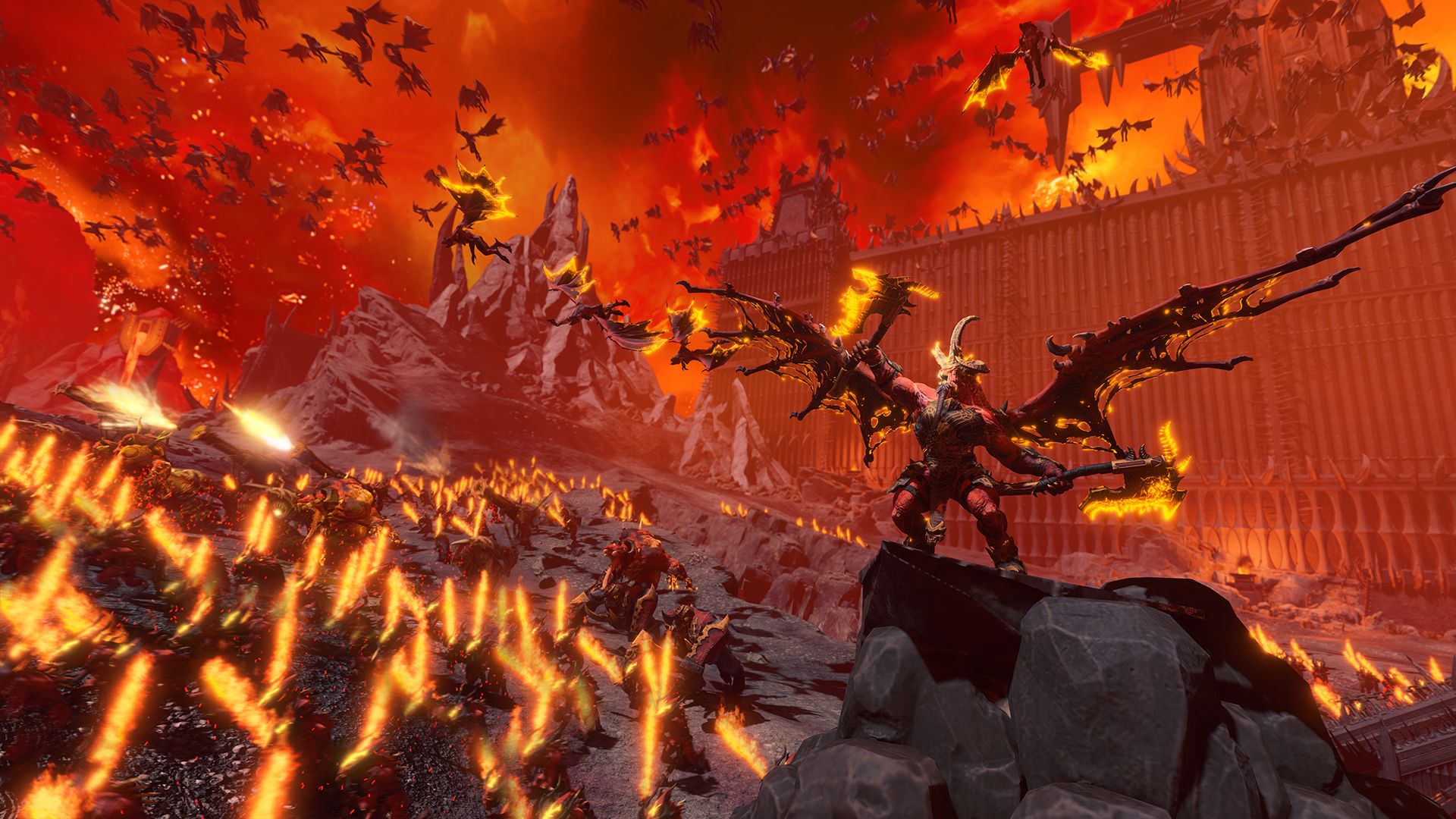 The Bloodthirster Skarbrand was once the greatest of all Khorne’s Daemons. No other had piled so many skulls before the Skull Throne. One dark day, Skarbrand’s fierce pride grew hot and, blinded by rage, he smote the Blood God a mighty blow. Incandescent with wrath, Khorne cursed Skarbrand’s name and choked all personality from him, leaving only the bottomless rage that had caused him to attack. Since that fateful day, Skarbrand has wandered the mortal and immortal realms, drowning his sins in the blood of the slain – though he no longer has the wit to fully understand why.

Skarbrand is a ludicrous force on the battlefield, a titan of blood and rage. Even in his disgraced state, his incredible commitment to Khorne makes Skarbrand ferocious in his pursuit of enemies, near-impervious to magic, and a legendary commander of the demonic hordes of Khorne. He is constantly on the warpath, seeking only that which is detailed in the battlecry: Blood for the Blood God, Skulls for the Skull Throne. 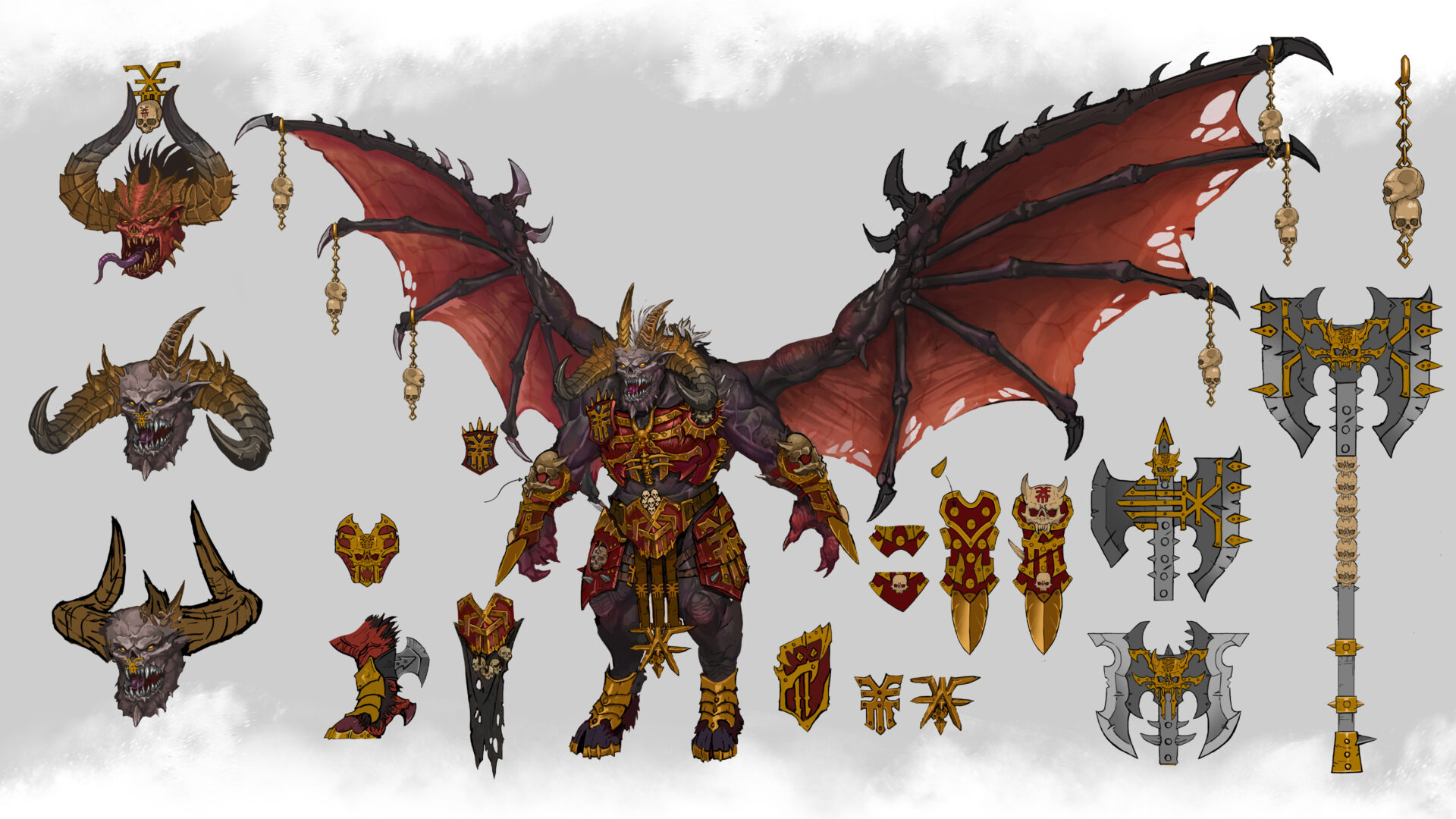 Exalted Bloodthirsters are not only the deadliest of Khorne’s Daemons, but the mightiest of all Daemonkind. A single such beast is a harbinger of bellowing death, destructive beyond telling, and lives only to slaughter, maim, and destroy all that it encounters. It is the fury of war given form, the unfettered primal rage of the world made manifest. And such should be expected of a beast whose master is the Dark God of Bloodletting, Slaughter, and Murder.

Second only to Skarbrand in their power both on and off the battlefield, Exalted Bloodthirsters are monstrous, destructive, and incredible forces of nature. Terrifying, flying, blood-fuelled deathbringers, they lead only the mightiest of warhosts. 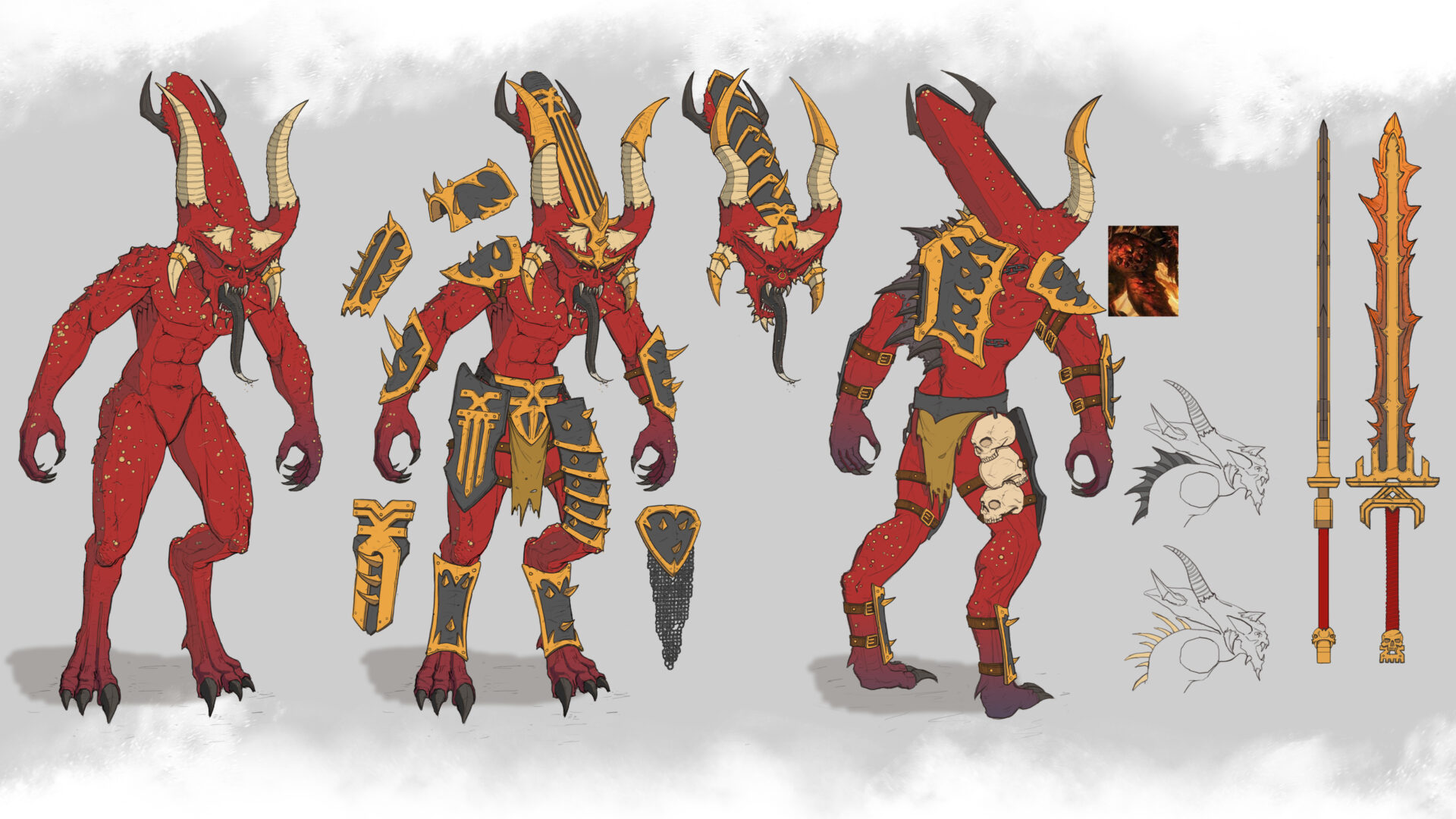 Most feared of all amongst the Bloodletters are the dread Heralds of Khorne. To hear their call is to know your skull will be collected in mere moments by the deliberate, merciless leaders of Khorne’s armies. As a Herald’s rage grows, all nearby Daemons of Khorne become gripped by an irresistible fury that lends further intensity to the carnage. They hack and cleave their foes until there is nothing left save a mound of corpses and another victory for the Blood God.

Occasionally, a particularly favoured Herald of Khorne is granted a Juggernaut, mighty beasts of groaning iron and brass, taller than a man and possessed of crushing mass, to better pursue his master’s goals. Such a pairing is far deadlier than the sum of its parts. Should a foe survive the frenzied biting and goring, they are likely to be crushed beneath its brass body or cut down by the rider.

Those who go above and beyond the call to slaughter may be granted a Blood Throne. A mighty Daemon Engine armoured in brass and driven into battle by iron-shod wheels which crush and mangle all who stand in its path. From atop his macabre throne, the Herald searches for foes whose skulls will make the most audacious offerings. Those plundered from cowards are fed into the Blood Throne’s baleful workings, consumed in fire to bring the Daemon Engine fresh vigour. Those taken from the valiant are claimed by the Herald and fused with the throne itself, to stand throughout eternity as grim monument to the futility of opposing Khorne.

And here’s a look at the rest of the roster.

Blood for the blood god, skulls for the skull throne! 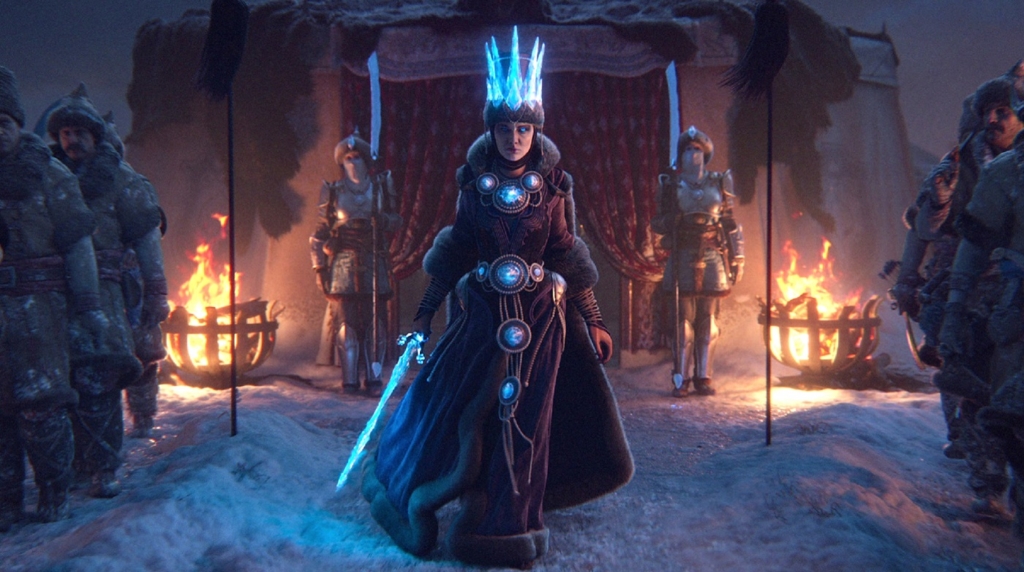