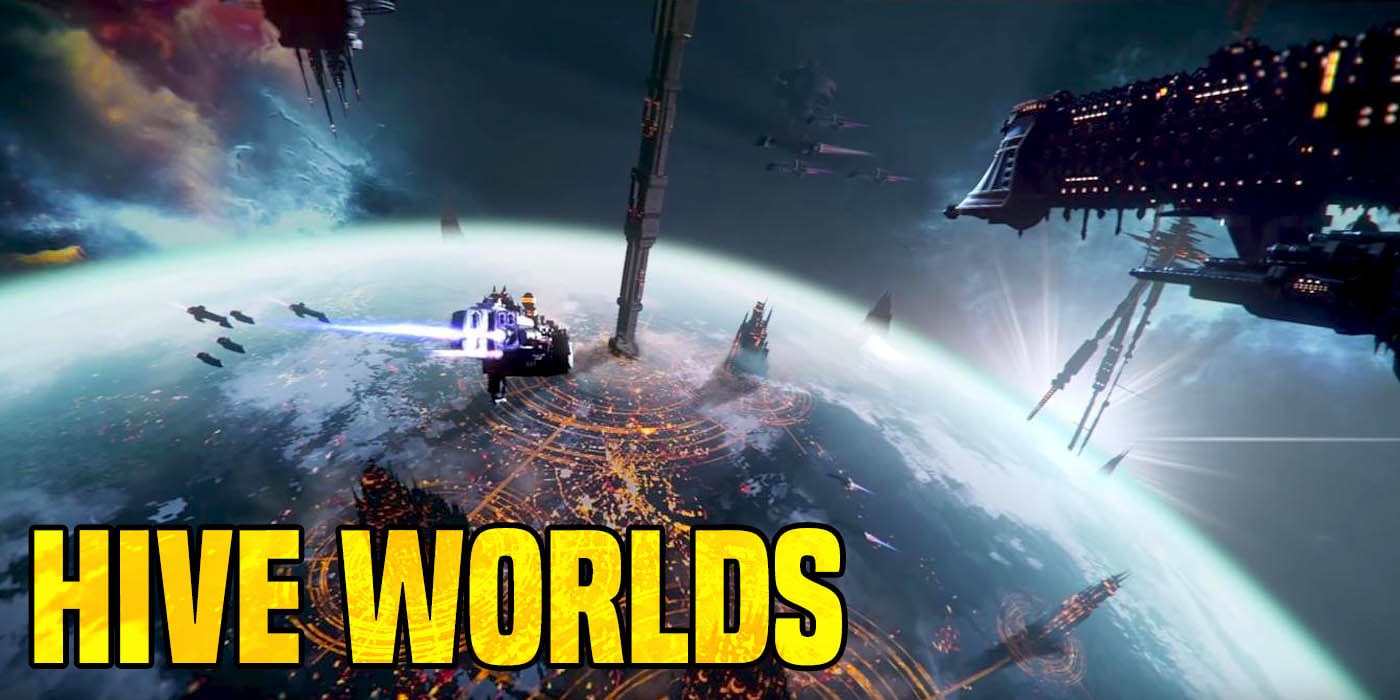 Today we focus on the famed Hive Worlds of the Imperium, with populations as numberless as the enemies of humanity which beset them.

A η-class (eta class) or Hive World is a category of Imperial planet distinguished by vast, continent-spanning cities, often built high into the sky and deep beneath the earth.

The Hive Worlds are estimated to comprise between 10-25% of the total quantity of Imperial planets. The exact numbers are difficult to establish due to the bureaucratic features of the Imperium itself. Populations of every Hive World are enormous, and almost all food needs to be imported. A Hive World rendered temporarily inaccessible through Warp space will suffer a devastating famine within a very short space of time. It will become a vast catacomb of lunatics driven to excesses of anarchic, urban savagery by starvation and claustrophobia. Hive Worlds are dangerous, being too large to monitor safely, and their citizens are typically unbalanced, if not utterly crazed. It has been known for the Adeptus Arbites to cull these planets in order to bring their populations down to manageable levels.

Billions of people can live crowded together in a single Hive city. Each of these Hive Worlders is a potential soldier for Imperial forces, including the Imperial Guard and the Space Marines. Hive Worlds contribute the vast bulk of the recruits for the Imperial Guard. The violent gangland lifestyle in which most residents are forced to live means they are already hardened and experienced in warfare. Almost every recruit will already know how to handle a gun. Hive Worlds also serve to populate newly discovered planets. Imperial citizens are gathered from various Hive Worlds (willingly or unwillingly) and shipped off to distant colonies. An example of this would be Medusa V. Hive Worlds have huge import/export ratios, exporting a vast range of materials, and relying on imports of food and water. In common with most other Imperial worlds, Hive World society has distinct classes, with a ruling class and a working class. Invariably the lower classes inhabit the lower and more decayed and polluted levels of the Hive.

Ichar IV is a Hive World located in the Ultima Segmentum, to the galactic north of Ultramar. It is a vital industrial center for the region, producing supplies for many armies. One of the planet’s major exports is ore and mycoproteins. At the beginning of the Second Tyrannic War, it was infested with Genestealers. A genestealer cult, operating under the name, “the Brotherhood,” instigated a rebellion on the planet that caught the attention of Inquisitor Agmar. The Brotherhood had control of the planet by the time Agmar arrived in the system. The inquisitor petitioned the Space Marine chapter, the Ultramarines, to help put down the rebellion. Marneus Calgar, chapter master of the Ultramarines, arrived 39 days later aboard the space marine battle barge, Octavius. Eventually, with the combined support of the Ultramarines, PDF forces, and the Imperial Guard, the inquisition successfully destroyed the invasion and cleansed the planet of all Genestealers.

Verghast is a Hive World located in the Sabbat Worlds. After the Imperial victory at Balhaut, the Chaos warlord Asphodel escaped the Imperial forces and eventually arrived on Verghast, where he corrupted the hive city of Ferrozoica and attacked the neighboring hives of Vannick and Vervunhive. Vannick was destroyed by atomic weapons, while Vervunhive was subjected to a protracted siege. A relief force from the Imperial Guard joined Vervunhive’s defenders and managed to barely repel the Chaos attack, though the city itself was destroyed. Asphodel was killed in a commando raid led by Colonel-Commissar Ibram Gaunt.

After the war, Vervunhive was denied Imperial relief, and its population dispersed into other hive cities, some of which were newly founded. In the later years of the Crusade, however, a modest Imperial contribution was allowing Vervunhive to gradually reconstruct.

Necromunda is a Hive World in Segmentum Solar, and a major producer of munitions for the Imperial Guard. Necromunda’s forges produce lasguns, autoguns, shotguns and boltguns, among other weapons. The planet also levies huge numbers of troops for the Imperial Guard (most notably the “Necromundan Spiders“), as well as other supplies. Necromunda is typical of most hive worlds, its hive cites rife with powerful gangs.

Necromunda was founded 15,000 years ago as a mining and manufacturing colony. It had previously been a part of the Araneus Continuity, a small empire of Humans ruled by Techno-nobility. After defeating the Continuity, It was liberated from an Ork presence by the Imperial Fists during the Great Crusade, establishing the close ties between Necromunda and the Chapter. According to another point of view, it is not Orks but the brief defiance of the former Necromunda’s human colony against the coming of the Imperium unleashed a war that made ash wastes from were hive-cities rise The ensuing millennia have not changed its basic purpose very much; Necromunda is still a world of mines, factories, refineries, and processing plants. The planet is a vast powerhouse of industry, making thousands and thousands of different items for use throughout nearby planetary systems. 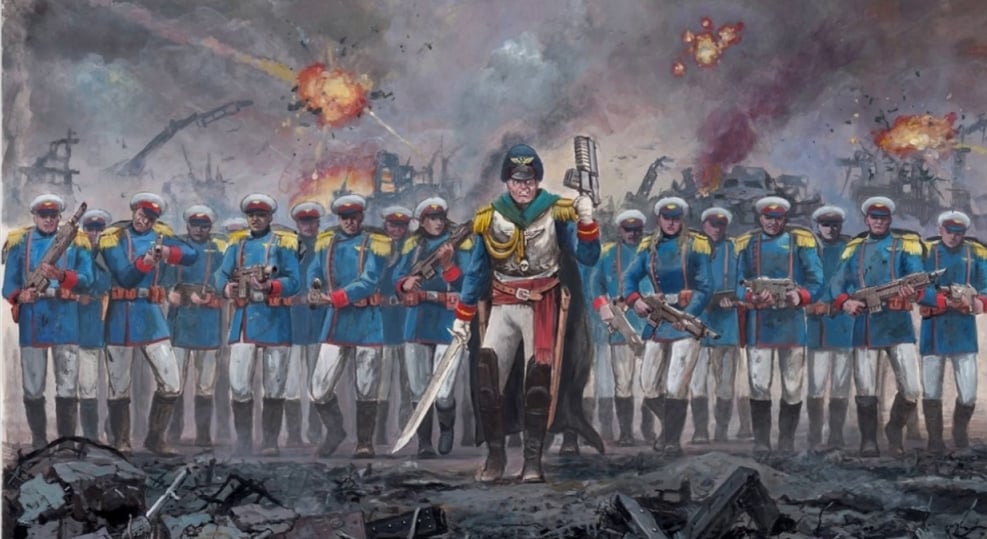 Mordian is a tidally locked planet; the time of the planet’s rotation equal to the time of its revolution around its sun. Consequently, half of the planet is in perpetual darkness while the other is constantly burned by the harsh sun. All life is on its dark side. For good reason, Mordian is also known as the World of Eternal Night.

Mordian’s hundreds of millions of inhabitants live on a land surface barely one-tenth the size of Earth. Its hive cities are characterized by pyramidal, multi-leveled towers rising like mountains towards space. The government is known as the Tetrarchy, and strictly controls and rations the planet’s meager resources. Mordian naturally breeds discontent, and the Iron Guard is the only thing that stands between order and total anarchy.

The greatest threat faced by Mordian came as a result of a conspiracy among Chaos cultists. Summoned by a spell, ships from the Eye of Terror poured Chaos Marines from the skies and daemons appeared within the streets. In the resulting Battle of Mordian, the Mordian Iron Guard eventually emerged victorious against the invasion.

Following the resurrection of Roboute Guilliman and the formation of the Great Rift, Mordian was one of the worlds which became stranded in the Dark Imperium. Mordian was subsequently besieged by the Thousand Sons during the Invasion of the Stygius Sector and though the Imperium’s Stygius Crusade later broke the siege, it proved to be no match for Tzeentch‘s invading forces. The overwhelmed Crusade, was soon forced to retreat from the Stygius Sector and it is not known if any of Mordian’s population escaped with the Crusade, before the Sector fell into the Chaos God‘s grasp.

In the years before the opening of the Cicatrix Maledictum, Vigilus was a vital source of manpower and material for the Imperium’s endless wars. The planet is made up of vast hive cities and colossal forges, broken up by dust-bowl wastelands and fortified reservoirs holding the planet’s scarce supply of potable water. For its economy, Vigilus was known for its exporting of excellent defensive technology thanks to an STC device found by local Tech-Priests. The STC allowed them to produce bastion-class force fields which soon became popular in the greater Imperium. The Force-fields are a staple of Vigilus and a cornerstone of its defense. At this time the world was ruled by Governor Lucienne Agamemnus IX, part of a dynasty that had overseen the planet’s affairs for millennia and had long ago signed a treaty with the Mechanicum.

Despite its power, the Agamenus Dynasty was constantly subverted by the power of the Ecclesiarchy, which managed to gain influence over the world’s PDF (known as the Vigilant Guard) as well as local Imperial Guard garrisons. The Ministorum brought in Adepta Sororitas enforcers to make sure their power over Vigilus was not tested. Despite this all-out war between the Agamenus Dynasty, Mechanicum, and Ecclesiarchy was avoided thanks to a combined body known as the Aquiliarian Council.

After the opening of the Great Rift, Vigilus was within the Imperium Nihilus and has become one of the only stable routes from one side of the rift to the other, making it strategically vital. As a result, Vigilus has become a sanctuary for refugees crammed within its Hive-sprawls who wish to traverse the Nachmund Gauntlet. Each such sprawl is protected by psychically charged Bastion-class force fields that render comatose any who would seek to breach their boundaries, enabling the defenders to slaughter them at leisure. The world quickly became a popular Mechanicum stronghold of the Stygies VIII due to the proximity to the Stygius Front.

Because of its strategic location, Vigilus has fallen victim to a large number of invasions which include Orks, Genestealer Cults, Dark Eldar, Saim-Hann Eldar, and Chaos.

Vigilus is an arid dust bowl-like planet, and as a result, water is extremely valuable and scarce. Even the consumption of water is seen as a status symbol. The poor drink yellow foul-tasting water from deep underground known as aqua subterra, while the elite drink water from melted icebergs known as aqua glacius. The Mechanicum population on Vigilus drinks aqua meteoris which is harnessed from orbiting asteroids while the Ecclesiarchy drink aqua sanctus, which is purified with holy oils

~ Honor the hiveworlds of the Imperium, for they hold our most precious resource – humanity itself.