Age of Sigmar: How to Play Soulblight Gravelords – Kastelai Dynasty 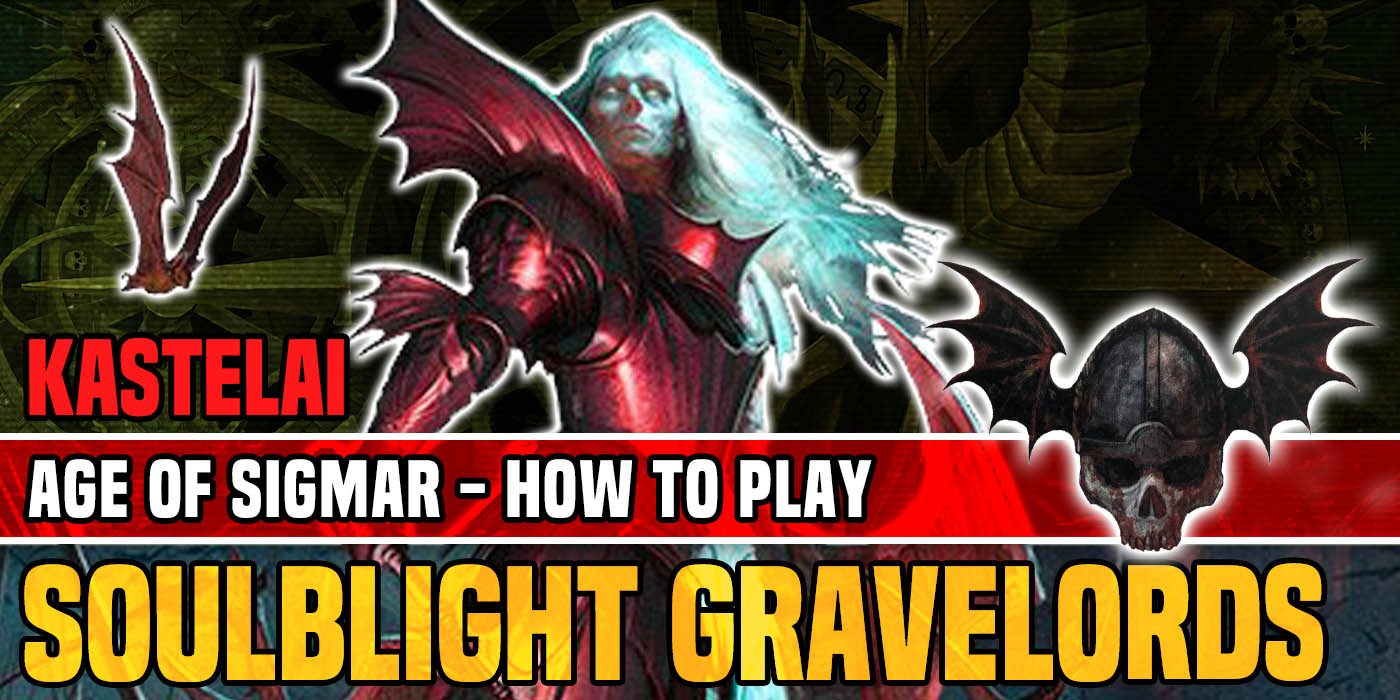 Today we look at how to play Soulblight Gravelords Kastelai in Age of Sigmar. The Children of Abhorash are back, and they’re not happy.

The Soulblight Gravelords have returned in magnificent, terrifying force, separating themselves from the old Legions of Nagash and bringing along a few new friends in the process. One of the OG bloodlines is the Kastelai, the Realms’ equivalent of the ancient Blood Dragons that terrorized the Old World. Fans of ancient vampire warriors or martial prowess honed over years of practice and bloodshed will love these guys, and rightly so.

The Kastelai are one of the five bloodlines from the new Soulblight Gravelords book, alongside Avengorii, Vyrkos, the Legion of Night, and the Legion of Blood. Each bloodline has a unique style of fighting, and for the Kastelai, that style of quality over quantity, utilizing ancient generals astride long-dead drakes leading formations of vampiric knights in a twisted reflection of martial honor. The Kastelai hit fast and hard, utilizing a teleporting stronghold that allows them to ambush their enemies from unexpected angles, crushing them beneath armored hooves or skewering them on wicked lances. These guys are the best warriors of this or any time, and they are more than happy to show you why. 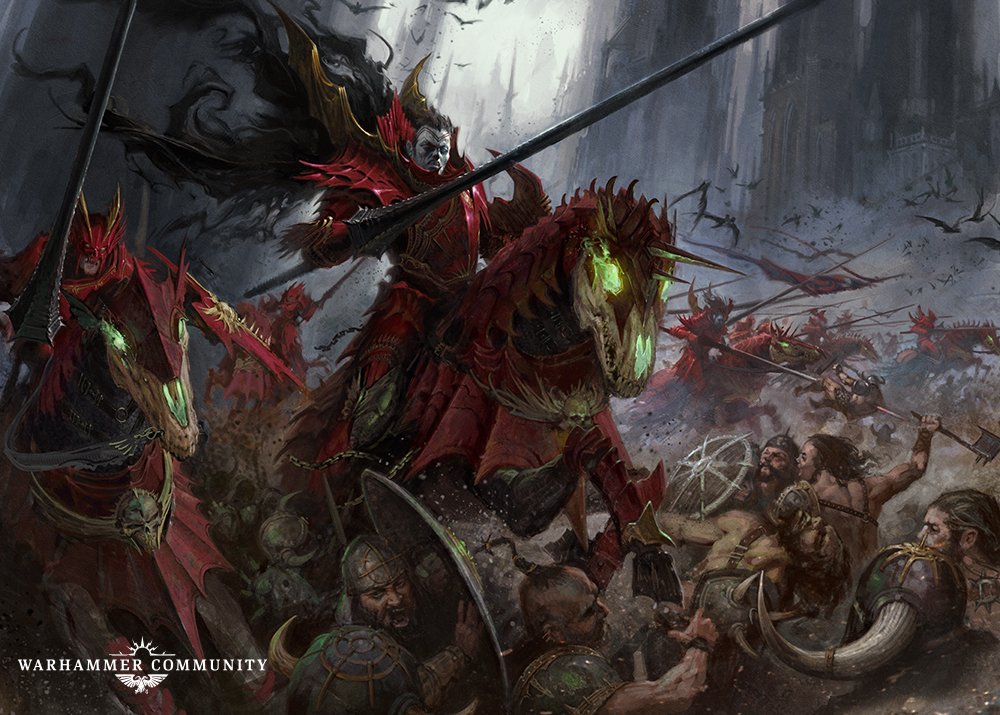 Why Play Beasts of Kastelai?

Of the five Soulblight Bloodlines, the Kastelai are one of the most powerful, combining speed and ambush tactics with exceptional power. They can quite literally trample enemy infantry underfoot, and as of the latest FAQ can turn around and slam the unfortunate unit in the back. If you want to play an army of unmatched martial prowess that scythes through the enemy like wheat, Kastelai is for you.

Signature Rules
How you play and what rules you worry about depends on your bloodline, but these are the basic rules you need to know for this army.

In addition, Kastelai armies have the following army rules:

When playing Kastelai, these are the units you can’t afford to leave at home. Normally we do five here, but I assure you, you only really need three. 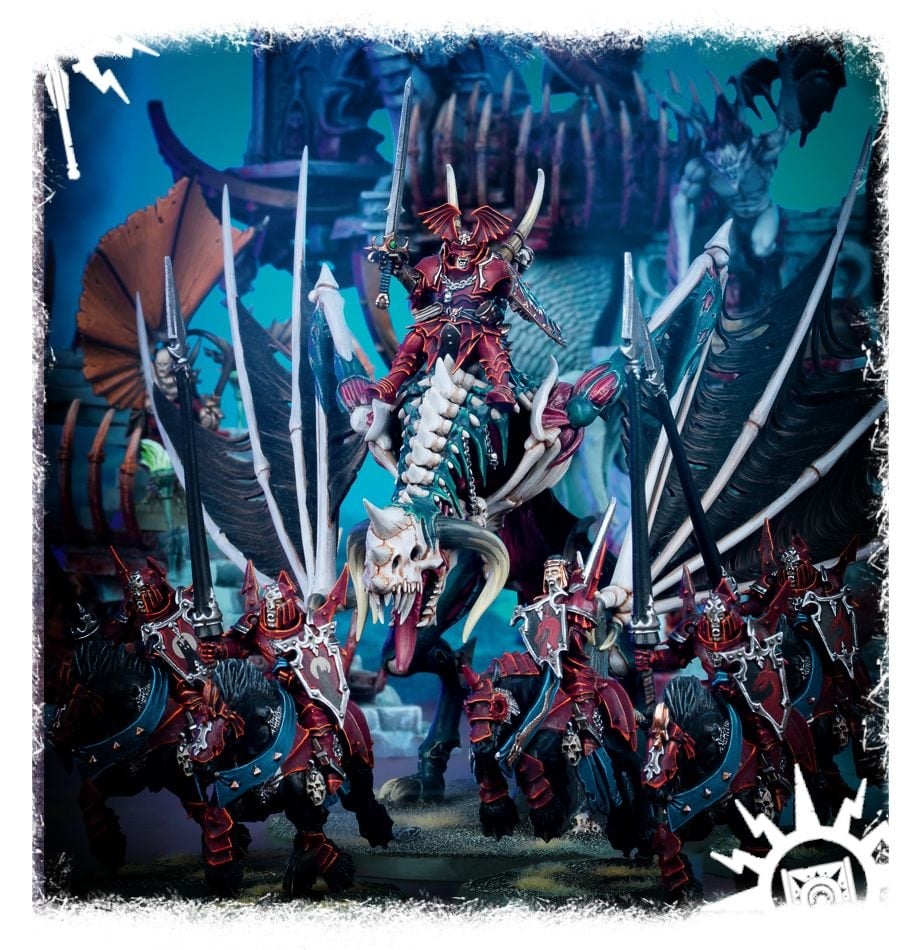 Vampire Lord on Zombie Dragon – A powerful hybrid caster that can wipe out enemy units with ease or cause a pesky hero to bleed out with a single spell. Their lance charge alone can annihilate a single unit, and then they also have the dragon they’re riding to attack as well with claws, teeth, and rotten breath. For extra style points, consider bring Prince Vhordrai, the canon leader of the Kastelai faction, and watch him end lives with abandon. 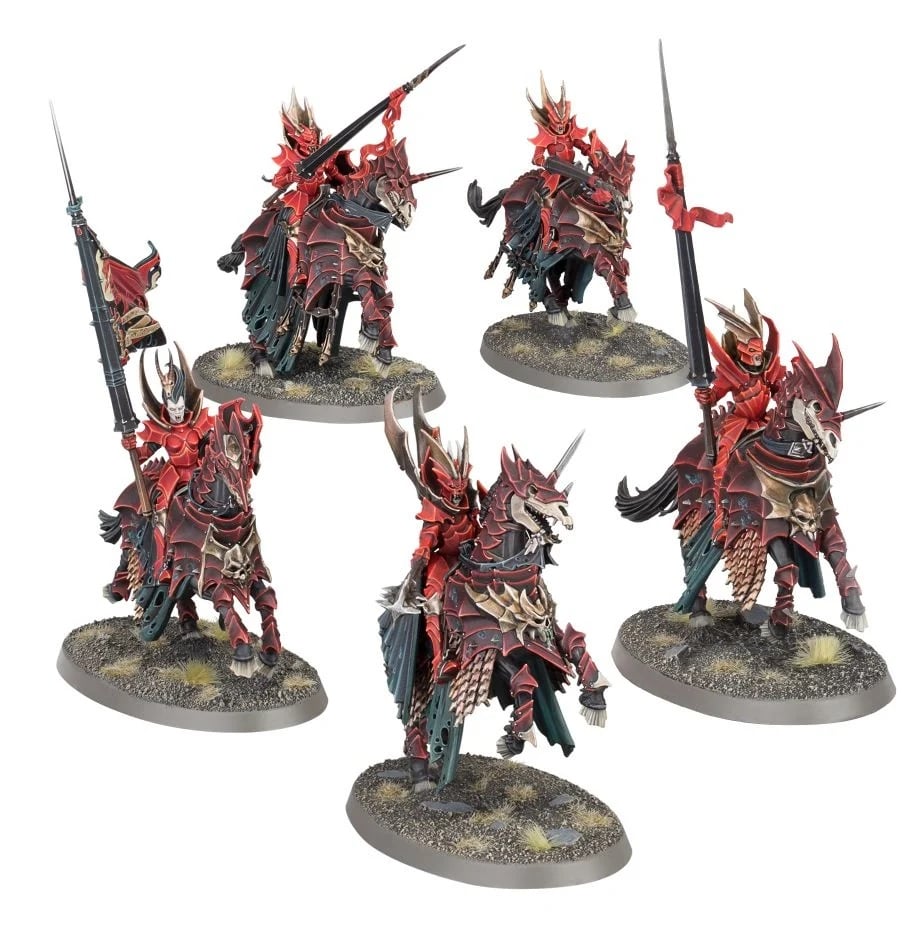 Blood Knights – Your conditional battleline, and mostly all you’ll need in the army. They hit hard, they move fast, and against an enemy with less than 3 wounds, they can trample over them, turn around, and get their charge bonus again. One of the most devastating cavalry pieces in the battletome, if not the entire game. 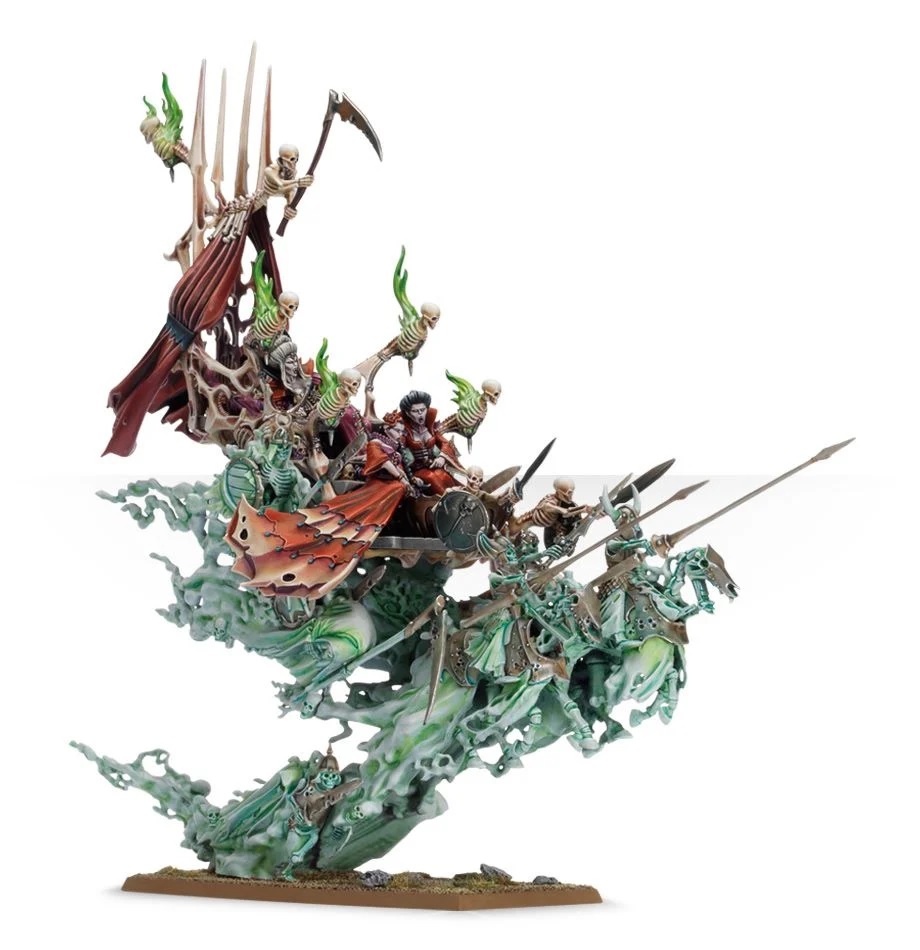 Coven Throne – Another powerful hybrid caster that can dish out an obscene amount of damage, but honestly, you’re not bringing her for that. The CT Signature spell gives your Blood Knights a 2+ to hit, to wound, and to save, which is…absolutely absurd. There’s no universe where you don’t want at least one of these floating around. 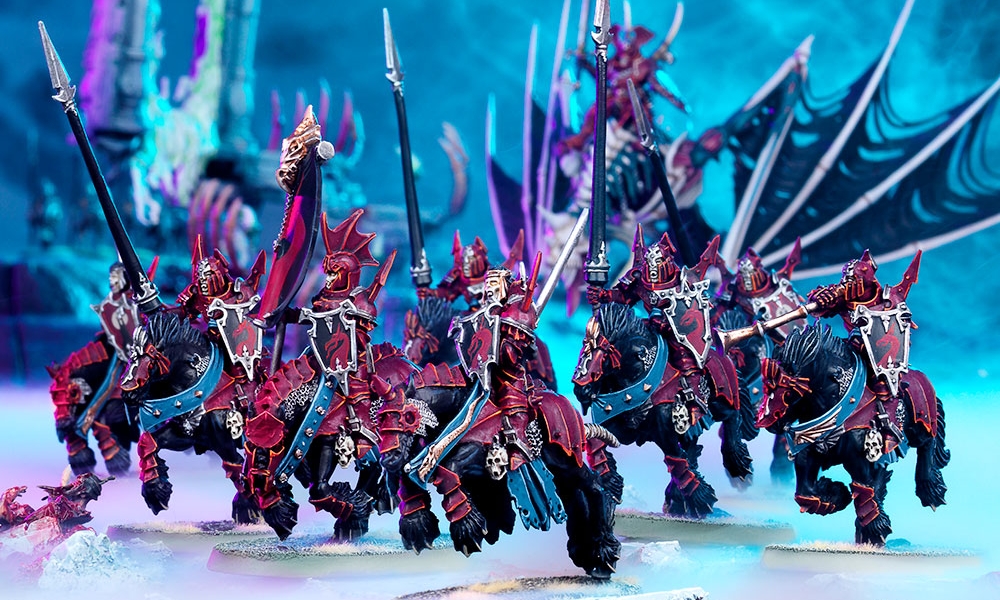 Hit hard, hit fast, then wheel back and hit again. Keep your Blood Knights buffed, and they won’t let you down, and don’t charge something you can’t either kill in a turn or trample; leave that to your heroes.

Author: Clint Lienau
Originally from North Carolina, Clint comes to Austin as the latest in a long list of haunts of a wandering actor. An avid gamer, writer, actor, pyrotechnician, and general nerd, he writes two Age of Sigmar weekly articles for Bell of Lost Souls from a slightly less than meta angle, plus a weekly tournament roundup. When not busy being a clueless cowboy, Winterfell Bannermen, or whatever else acting life throws at him, he enjoys reading folklore from around the world, writing narratives for his Wargaming armies, or watching all the movies he can. Look for his storytelling podcast, By the Dancing Fire, or find him on Twitch at RedWendigo13.
Advertisement
Age of Sigmar AoS Death Armylists How to Play Tactics
Advertisement

AoS List Of The Week: Nurgle Drones On For Victory 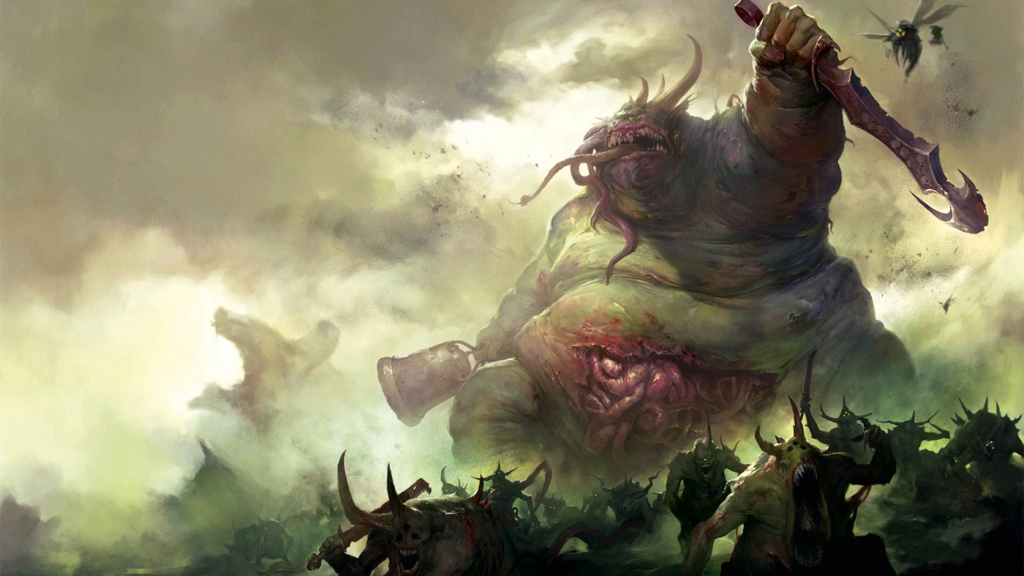