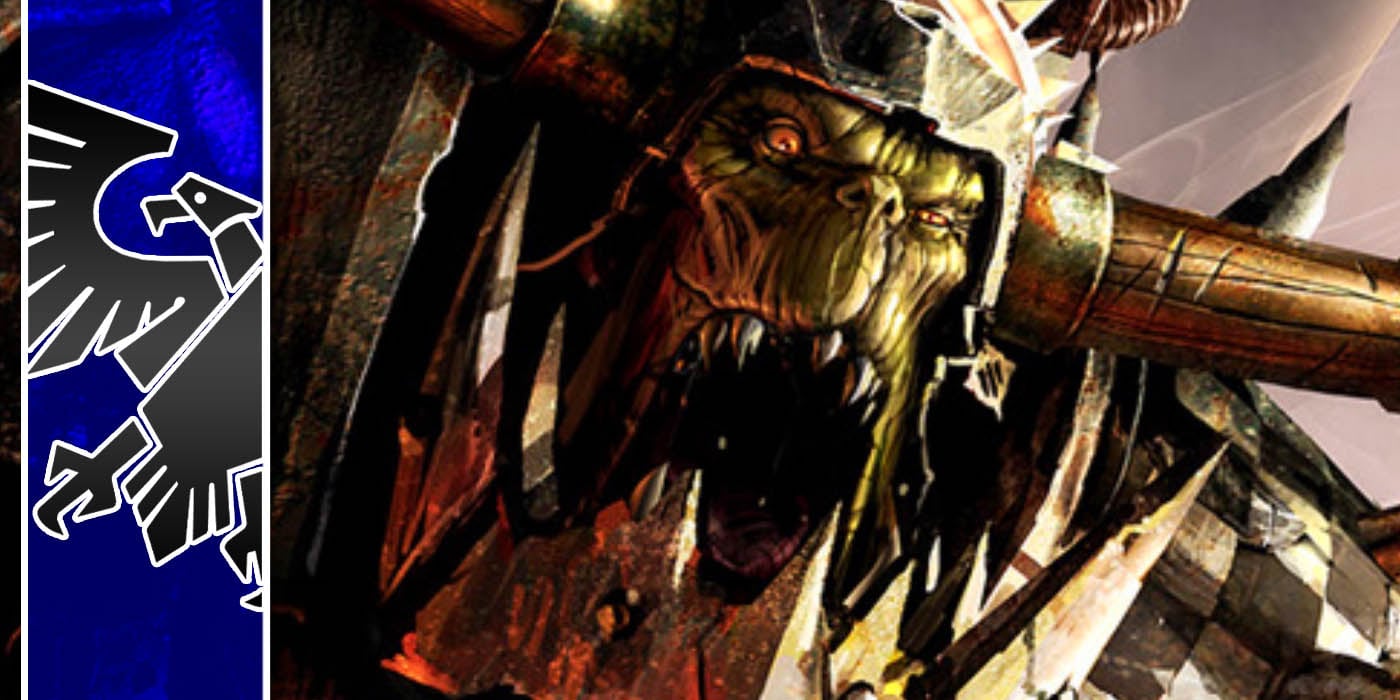 We have some Ork codex leaks even though people didn’t get the codex to look at. Let’s take a look.

Goatboy here and overall it is a different book than it was before which isn’t bad – just different.  It appears the Kultur’s all got shifted a bit with the powerful ones taking a hit and some of the other ones getting a boost.  In fact just like the Sisters release – what was once good is now no longer as good.  New things obviously seem pretty good and the army as a whole is shifted.

On the Kultur front the Goffs and Freebootaz look pretty good.  Goffs can start with exploding 6’s in combat which seems pretty boss and then you can get characters to do it as well.  With Beast Snaggas being available for all Kultur’s you can see how a Squig army might be pretty mean.  The Freebootaz front also seems good as the shift to their trait is +1 to hit in the phase if something in your army killed a unit.  Mix this with some efficient shooting and other options and you start to get a pretty rough shooting load out.  We all know how Dakka Dakka has changed so getting a better and more efficient bit of shooting will be pretty awesome – especially as it is board-wide.  The other Kultur’s took a hit as your Deathskulls got the normal nerf of only reroll a Hit or a Wound, removal of 6++ save, and just not being nearly as amazing.  Evil Sunz also took a hit as they can no longer advance and charge naturally and need a Warlord trait to tell them what to do.  Snakebites have been leaked and while interesting I don’t expect it to replace Goff’s as they get Ghaz and I am pretty sure he is still dang good as he is a Supreme commander. 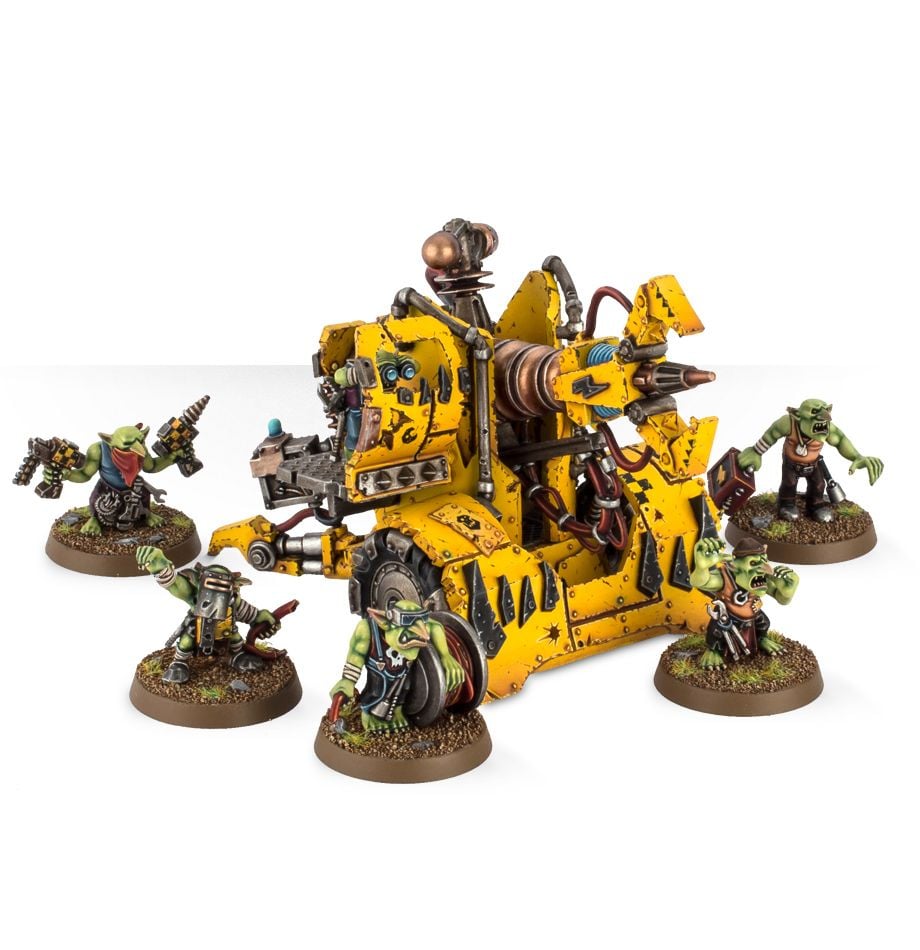 Oh and the Smasha Gun is basically gone.  That weird set of rules that either made your game crap or did nothing is now just a D3 blast.  The Mek Guns are also a 1-3 unit which could be bad as you can just shoot at the unit and not the individual model.  This unit always bothered me and I expected it to get kicked in the junk – which is what it seems like with the update.  I didn’t see any Artillery rules that say you can’t shoot the Grots or anything else so who knows. 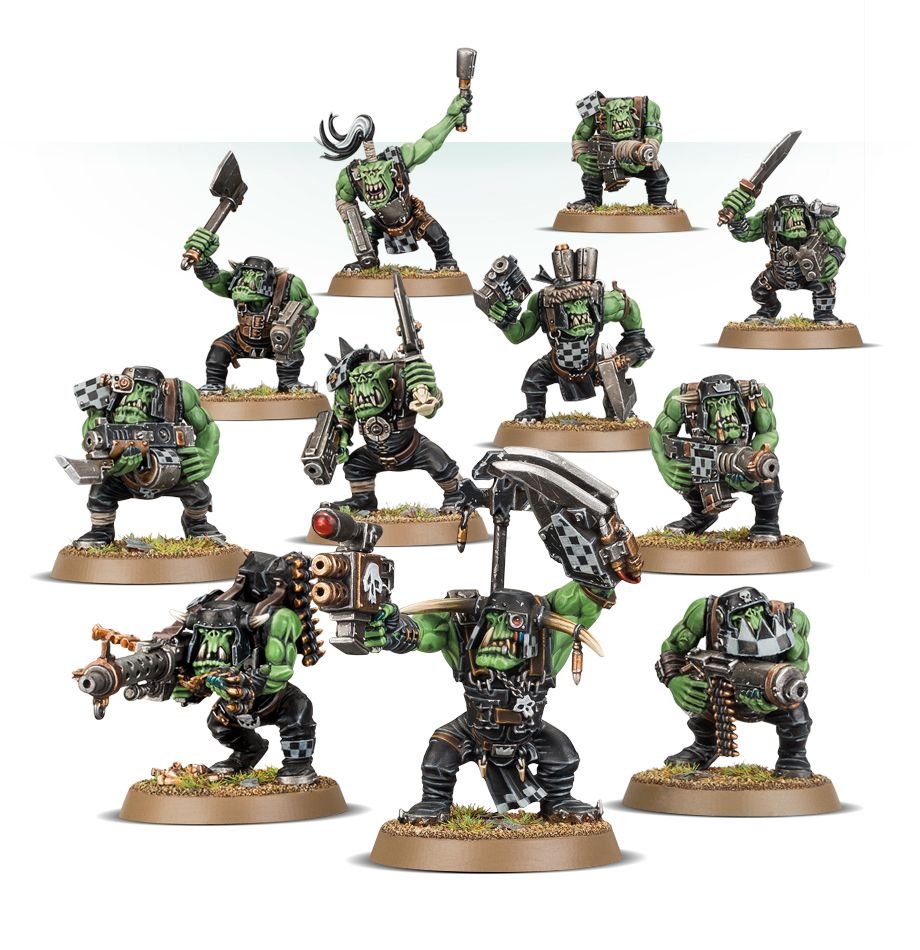 Mob Rule took a hit as well.  It now makes your unit not act as Half Strength if there is a non half-strength unit within 6″ of them.  This has me thinking the army is going to be a lot of Min squads – most likely in Trukks.  The whole shift or add-on of “Trukk” boyz and Mad Boyz will be interesting.  The Trukk option seems to allow the Boyz squad to hop out of a Trukk after moving.  I didn’t see any issues with charging so it gives the Boyz a bit of protection, 12 or so inches of movement, and the ability to come Krump ya in the face. 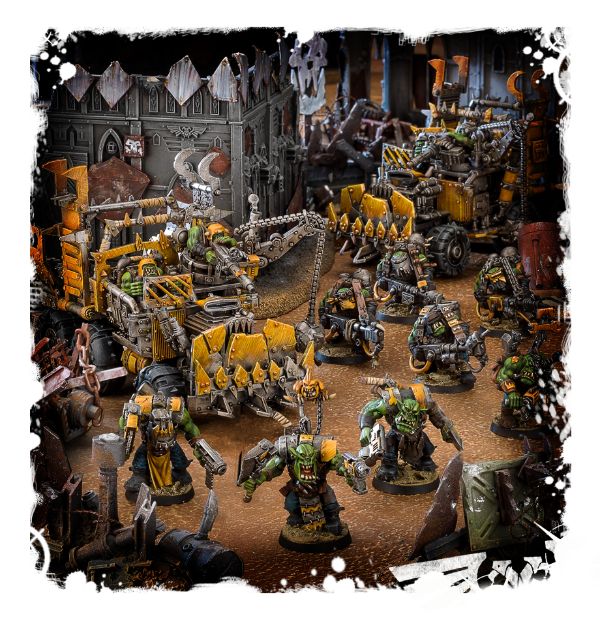 A lot of the Strats seem overcosted – or at the very least most likely correctly costed.  I have seen too many of the armies having Strats that just seem too good for price point.  With the Orks it makes me think they were tested properly.  I am looking at you Ad-Mech where strats and abilities were not tested on 20 man units.  It still makes me think will see some min/max Orks running around which kind of feels more Orks.

I didn’t see any Relics and the psychics seem kinda alright.  Da Jump is there and that is still amazing.  There are a lot of weird mortal wound powers too – but nothing that screams at you like some of the older powers.  I can expect to see Da Jump and the Fist of Gork to show up as you throw a Cruise Missile BeastSnagga Boss on a super Squigg into the enemy.  There is no Ork Warboss on a bike so will see how it gets shifted in the FW book – or FAQ’d to disappear. 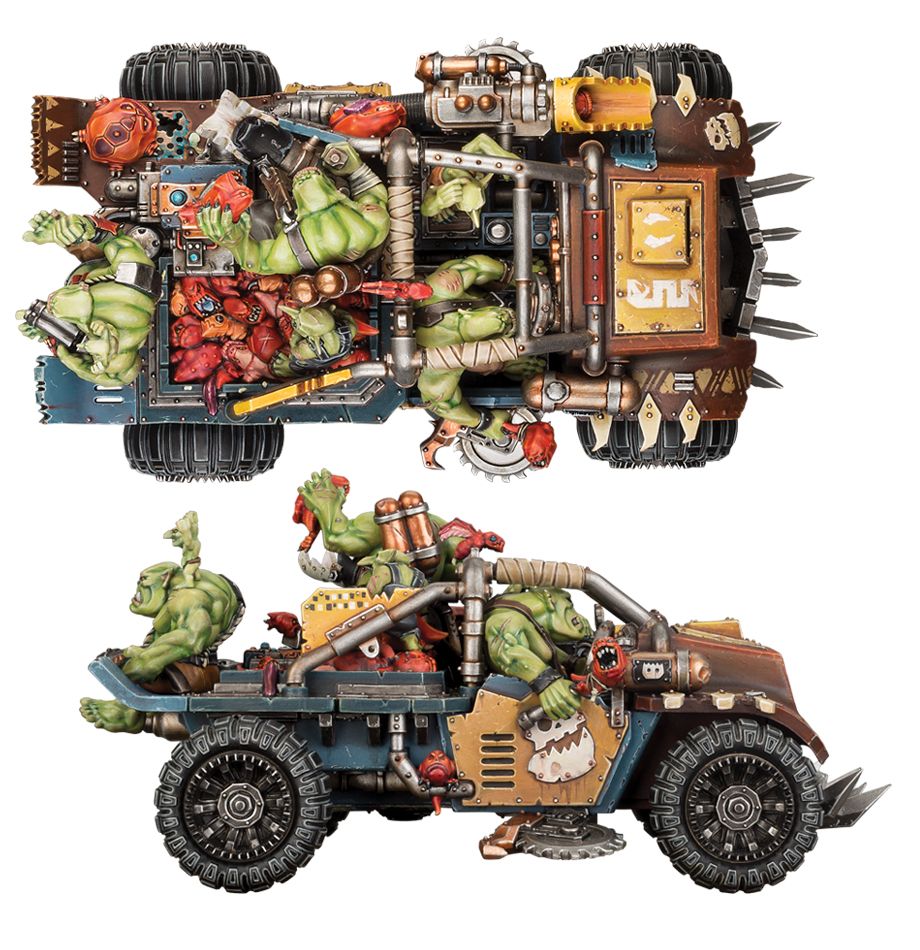 Squigs, I got your red hot, fresh squigs!

I didn’t get to see any of the Flashgitz rules other than a Double shoot stratagem for them.  I get the feeling they will be pretty neat – with a ton of shooting options.  If they get to start at BS 4+ and with some of the Freebootaz options you get a unit that can melt someone with firepower.  Just in time for GW to sell a unit that looks rad but was barely used.  Speaking of another model – the Rukkatrukk Squiggbuggies seem pretty interesting.  You get a bunch of no LOS blast shots at Strength 5, -2 AP, and 2 Damage.  They are all assault so this thing can drive around and throw out some firepower at 90 pts each.  Heck if you go Freebootaz and kill something you start to hit on a 4+ and get to be a bit of an issue.  Nothing is better than maxing out on hits on those big ole Ad Mech squads.

The Mork/Gork-a-nauts both seem interesting.  I have a place in my Heart for the Gork as I got a giant one painted.  I think having a few of those in a Super Heavy Detachment followed by some other options in a Freebootaz army mean you get a ton of firepower, punching power, and board presence if you want.  Throw in those beast guys and go to town or make it all Goffs and just get to cramping in the middle of the table. 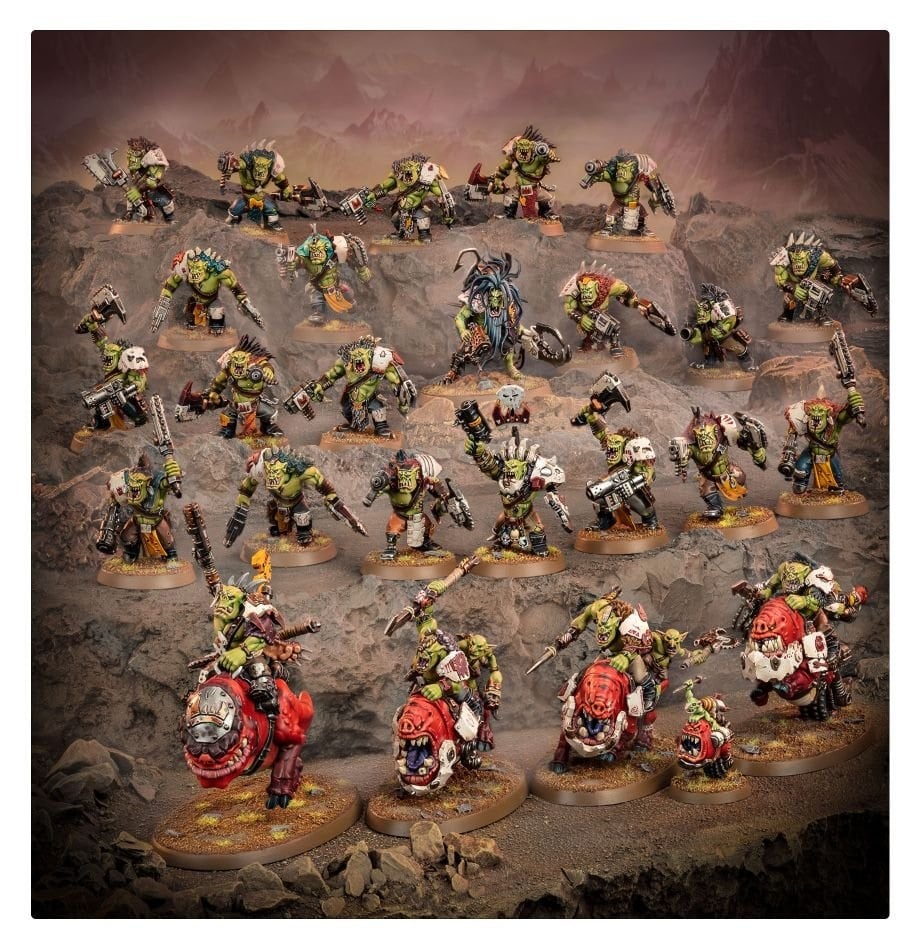 I am still excited to get the book, build the units, and get them painted.  I will still most likely do Red Orks with Yellow pants and Blue Jeans as that seems to be the scheme I enjoy painting.  I call them the Johnny Blue Jeans and they are coming to take your candy.

Author: Thomas / Goatboy
Thomas Reidy, aka Goatboy, the ever-evil member of BoLS. I do arts, play 40k, and even paint a lot of stuff. I have been playing Warhammer 40K since the 1990s, and have won multiple national events including Adepticon and GW GTs. I've been writing for BoLS for 15 years. Look at my Instagram to see what I am working on - or working on for someone. I am always doing something hobby related.
Advertisement
Orks Rules Warhammer 40k Warhammer 40K 9th Edition
Advertisement