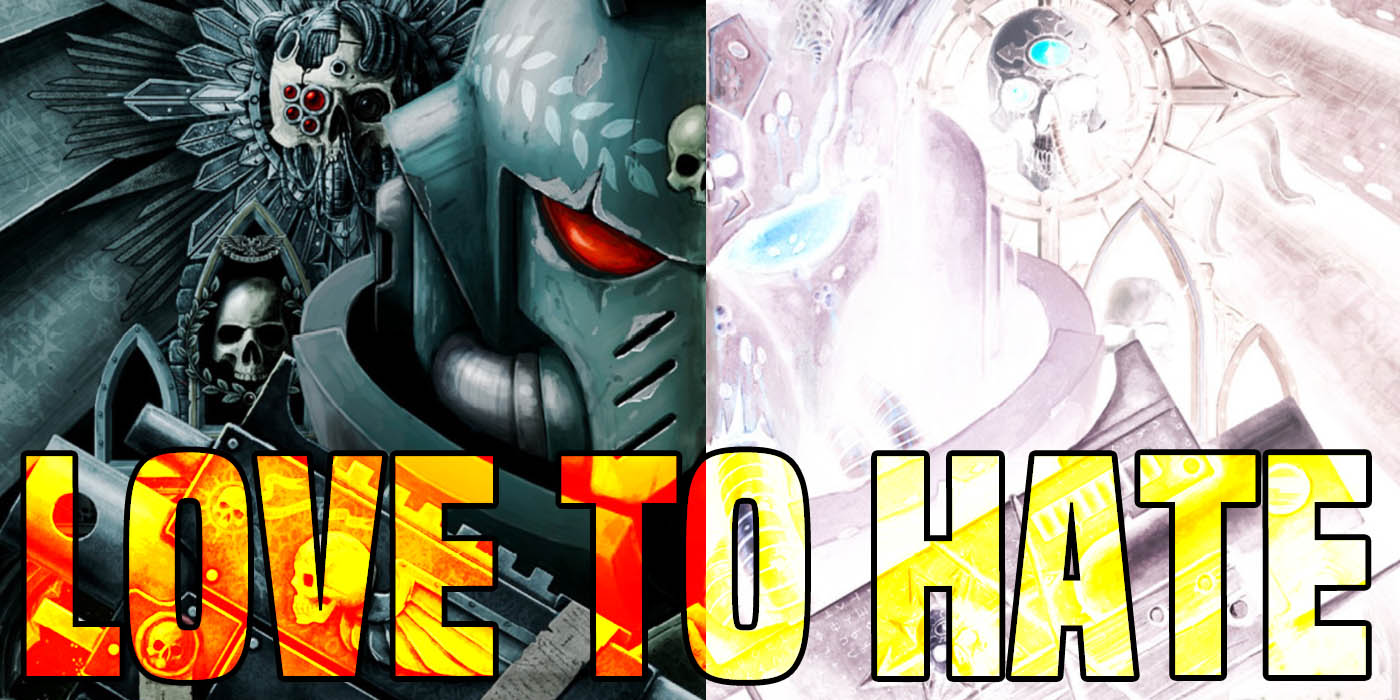 While we’re waiting for Beast Snaggas, let’s talk about the Grimdark’s armies I love to hate.

If you’ve been playing this game for a while you have a few armies you just hate.  Either the models don’t do it for ya, the army plays in a way that grinds your gears, or you just can’t stand them – there has to be a few that drive you batty.  Here are the top 5 armies I just don’t like.

This is the army that has made me mad for so long.  I just don’t like the models (they are old enough to drink and only want White Claws), don’t like the fluff, and just hate how they have played throughout the years.  I came back to the game right when they ruled the meta with their Falcons and Wave Serpents – roll 2 dice and pick the lowest damage result. Do you remember how frustrating that was?  Sure we have some Goatboy luck where I roll 2 6’s all day but most of the time I watched their terrible Falcons fly around and cause me to question why I came to the event that day.  It still hurts.

Of course as that edition went away we got replaced by other versions that were just as annoying.  Seeing a Farseer pop up in every army to counter your psychics, Ynarri dumb things, Reapers shooting you all dang day from behind buildings, and a host of other terrible things.  One of my favorite players did horrible things to me with 3 Giant Spirit Robots painted pink.  This is the army I love to hate the most and while I want all armies to be updated with new models – these Warp Spiders can eat it.

This is a true love hate relationship with this army as I hate how the army plays and interacts in the game in 9th. But I think the models are pretty dang cool.  It is the anime kid in me that does enjoy giant robots shooting lasers but the way it interacts on the table leaves me feeling empty inside.  Even though this is my number two hated army I do want it to get a cool update.  I have seen a lot of nicely painted robots, been killed by a lot of nicely painted robots, and think overall they are not a bad thing. 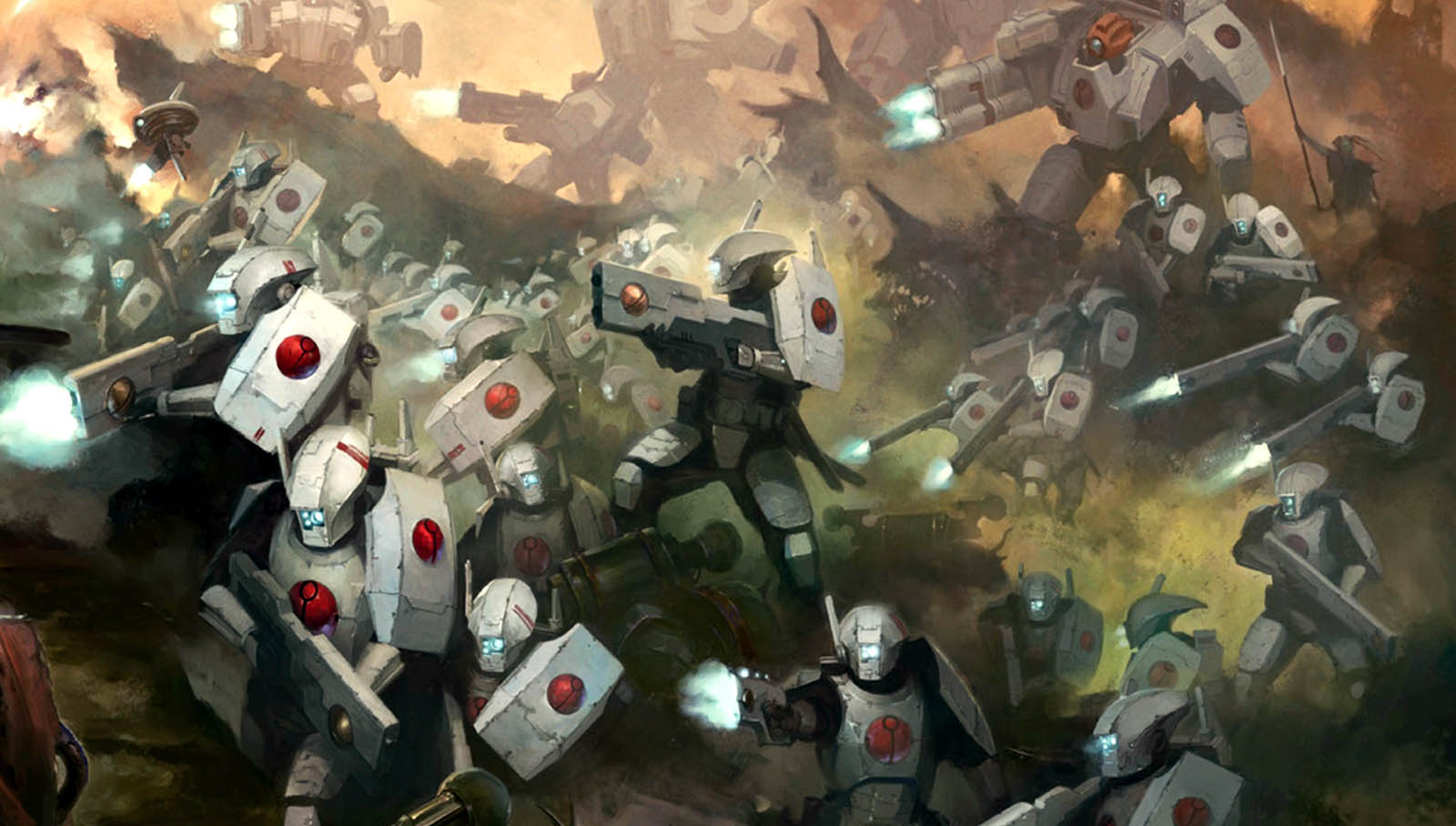 GW just needs to figure out how to get them to work right within the game itself.  I just don’t want them to be all Admech’d up as it would mean seeing a ton more barely painted min/max stuff at an event.  Still – they are fun to make pew pew sounds as they hop around the table with their little jet packs. 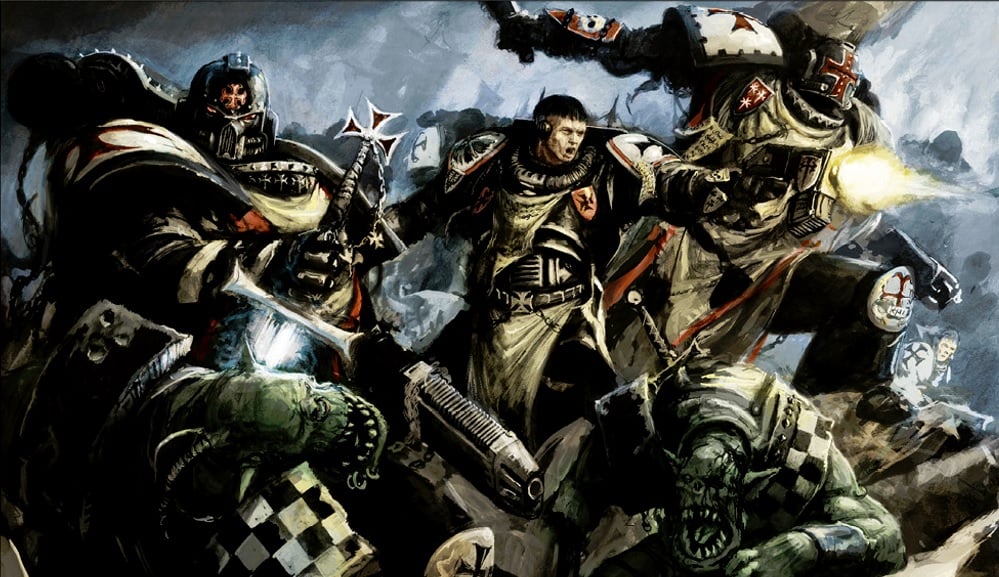 This is probably due to a friend that played them heavily but I just never liked the army.  A bunch of pious sourpusses running around in their black armor being mad.  I think it is just the overall aspects of the fluff that just doesn’t do it for me.  You would think an assault-based Marine army would fit right into my terrible little mind but these guys just – just seem like jerks.  I think this bit of bile is really due to the fluff more than anything else as it just feels very basic.  On the model front I have seen a lot of neat armies and I do applaud the players throwing these lists down as they are not an “easy” army to play and win with.  So while I love to hate them I do respect them – begrudgingly. 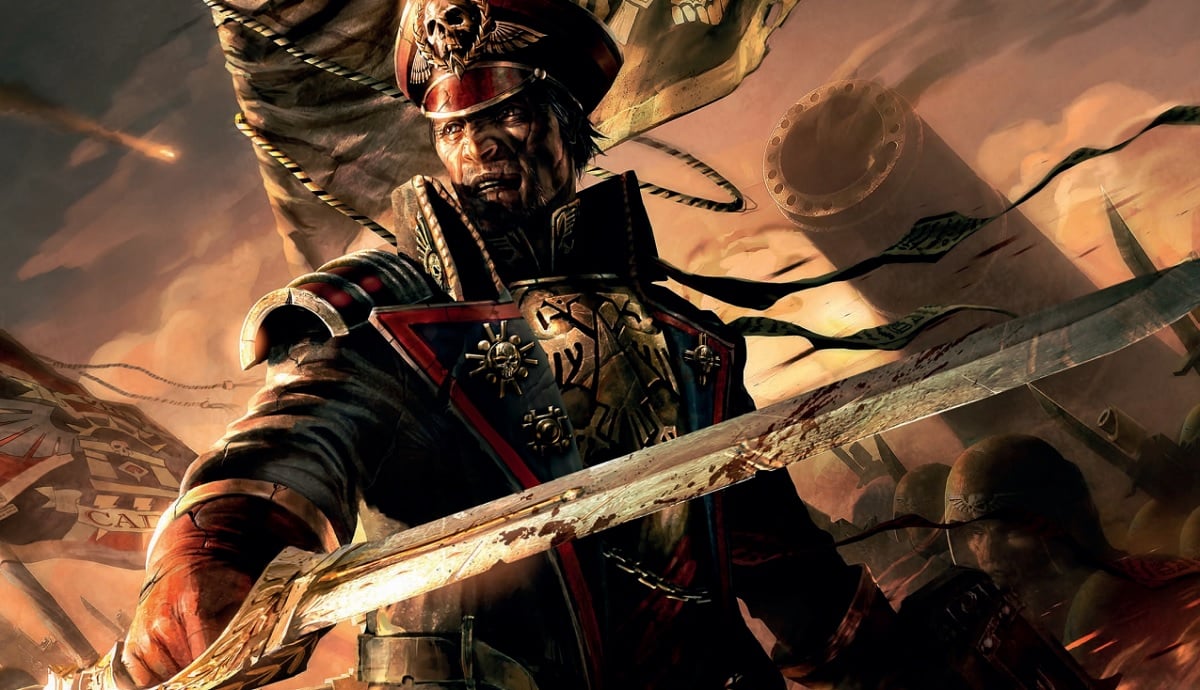 I just don’t like the idea of playing an Army… Army.  I think there is a lot of annoyance from some early days of big fat troop units, weight of las-gun dice killing my Stompa, and another friend who somehow enjoyed the Guard.  Heck a few old 40k friends played Guard so I fought against them a lot and was not happy most of the time.  How many times do we have to get a Sarge with too many attacks hitting you?  Or waves of Conscripts rolling over the table as you get pounded by Artillery you have no hope of getting to and removing? 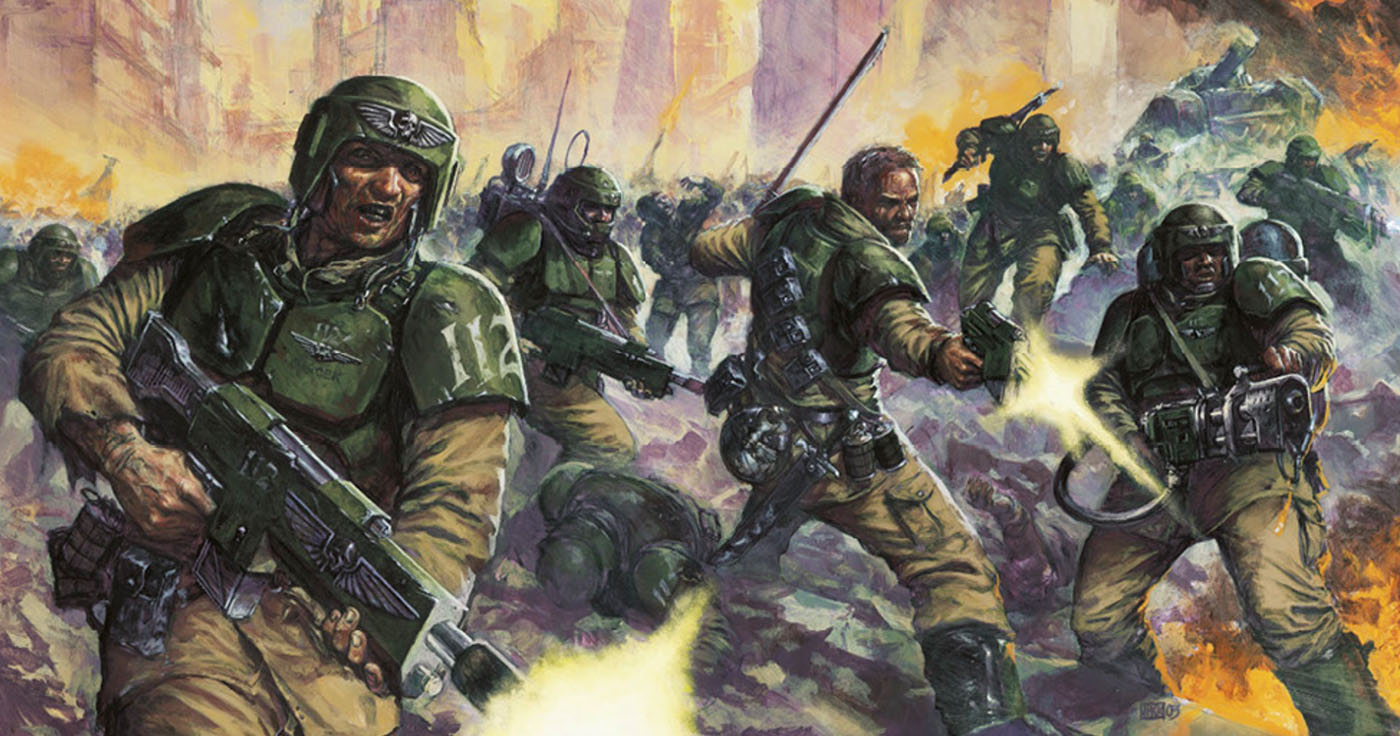 It doesn’t help that you really don’t have a ton of options plastic models wise so it ends up being pretty generic-looking Cadian trooper or the buff guys of the Catachan.  I do like the Tanks and hope they fix them up at some point to be fun.  It is that whole tank rush that interests me as again – screw those small bases and give me fat tanks and big monsters to smash with. Let’s hope the Death Korps give this army some variety. 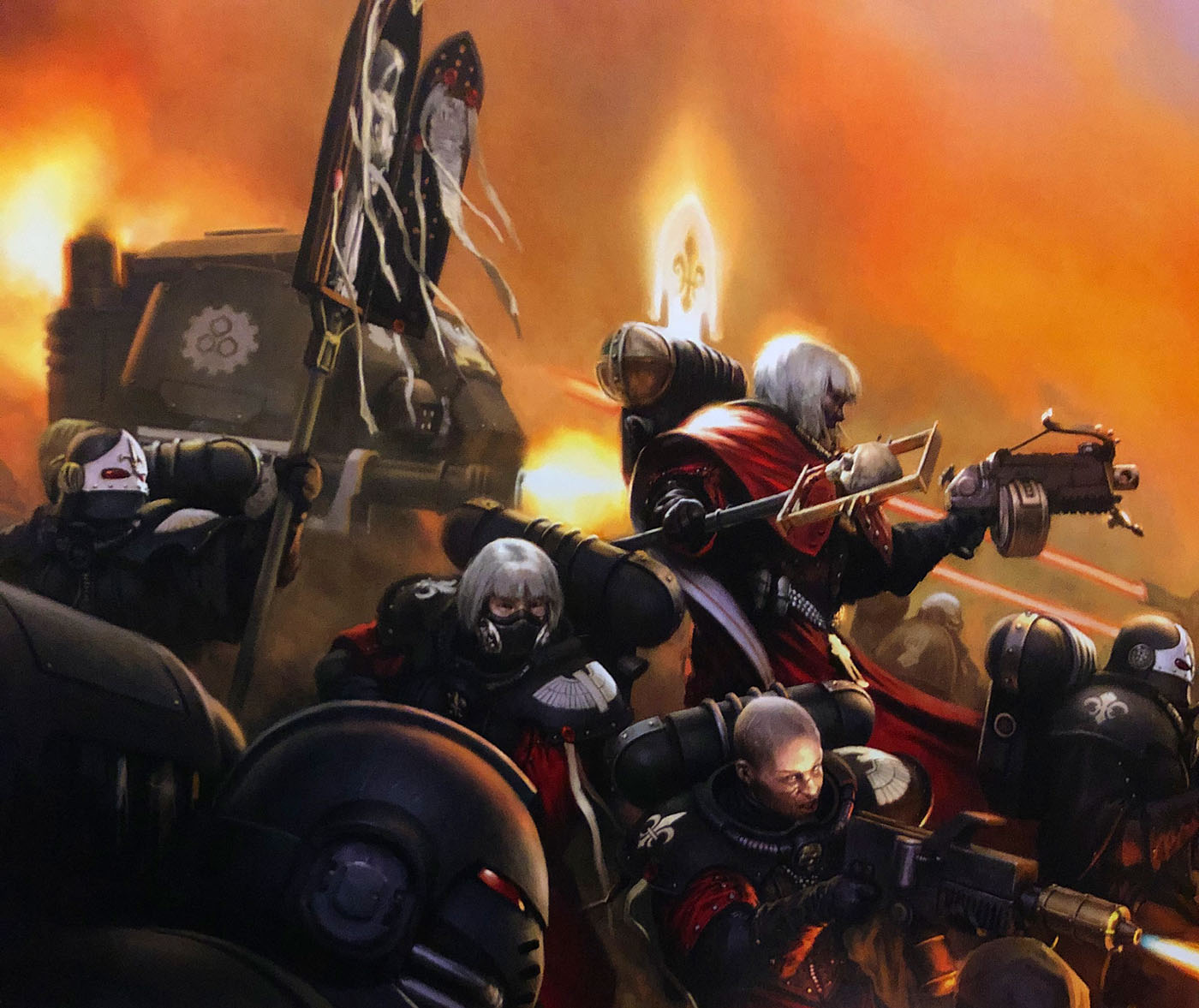 I have warmed to this army as I do like the new models.  I also like how the army seems to work as well.  I was tainted by the older versions that had a weird Faith system, some old models (painted an army with old models and putting together all those metal things sucked), and just an annoying game plan to try and smash your forces into.  I don’t think I will ever play this army as while I like the way it has been updated I just can’t bring myself to build it.  Will see how it ends up as we continue into 40k and the other armies that look too good end up being toned down.

What armies do you hate to see on the tabletop?  What model just didn’t do it for you and soured you on those plastic pieces?  Which ones have rules that just drive you nuts? Dark Eldar used to be in my top 5 but I have slowly enjoyed the aesthetic more and while I don’t plan on getting an army any time soon it wouldn’t be the worst thing to throw down with an extremely assault version of the Pain Space Elves.

Author: Thomas / Goatboy
Thomas Reidy, aka Goatboy, the ever-evil member of BoLS. I do arts, play 40k, and even paint a lot of stuff. I have been playing Warhammer 40K since the 1990s, and have won multiple national events including Adepticon and GW GTs. I've been writing for BoLS for 15 years. Look at my Instagram to see what I am working on - or working on for someone. I am always doing something hobby related.
Advertisement
Editorials Warhammer 40k Warhammer 40K 9th Edition
Advertisement 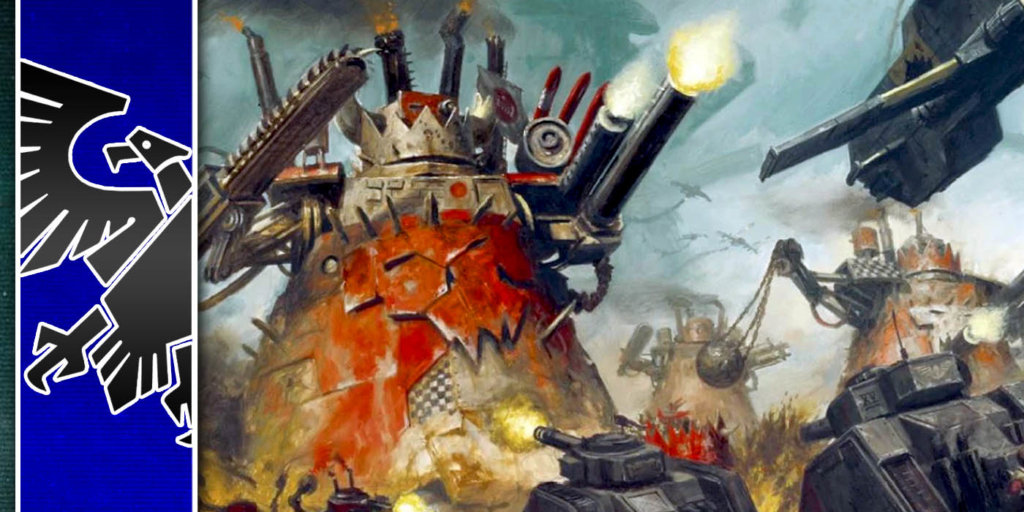