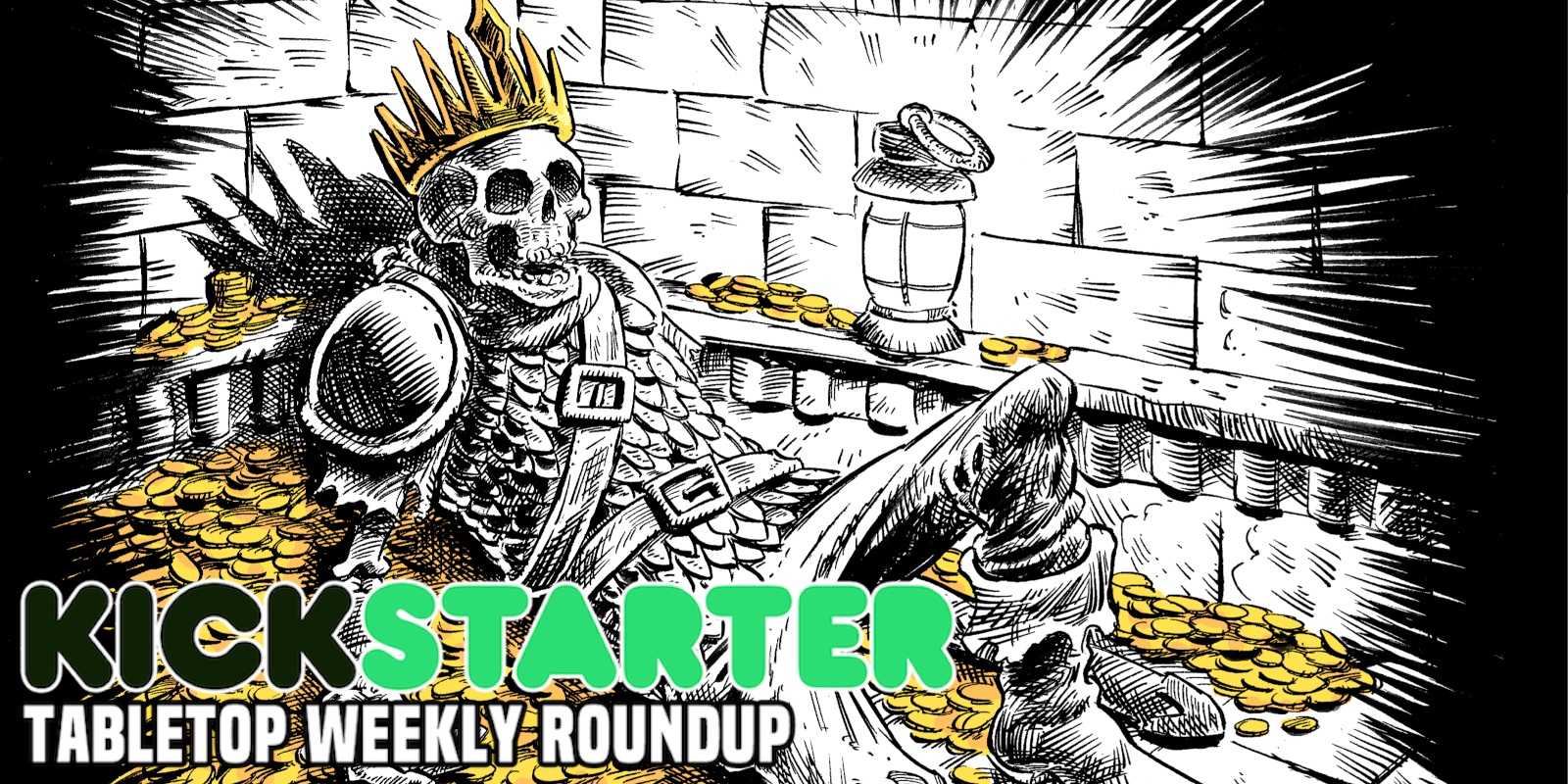 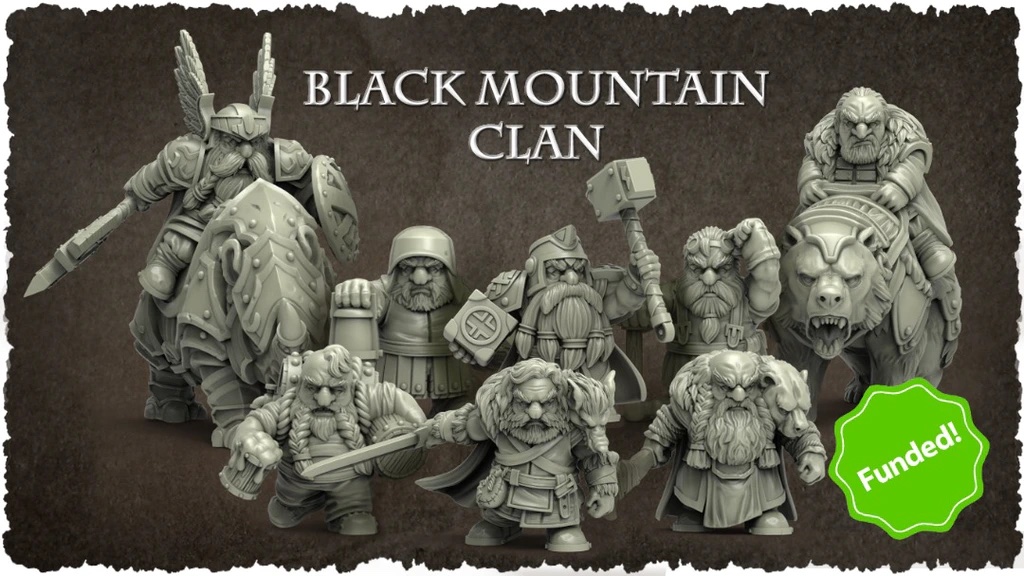 The Black Mountain fortress is located at the edge of the known world, protected by an ancient great wall built by mysterious ancestors, the Black Mountain Clan protects the population from the abominations hiding in the dark woods beyond the wall.  Only a few intrepid dwarfs join their forces, an elite of brutal and fierce warriors.

This project is for both [28mm] high-quality resin cast miniatures and STL files for digital printing.

Pledges start at $6 for a single resin mini or a single digital file. 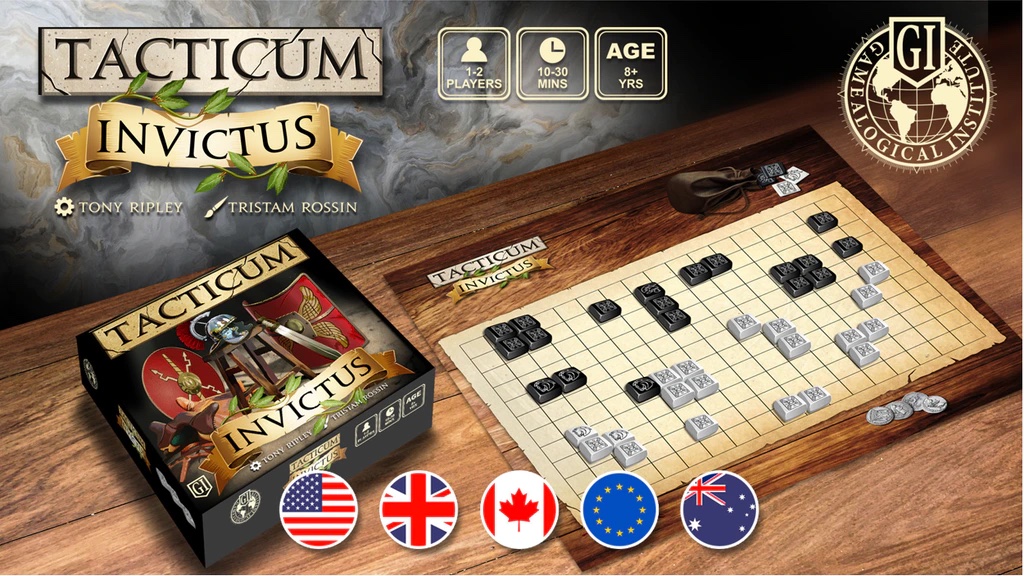 Tacticum is a 2-player strategy board game. It was developed with one eye on a rich heritage of games from antiquity and the middle ages such as hnefatafl (the “Viking game”) and latrunculi (game parts found at many roman sites), and bringing in the fun of some story line and scenarios. Are you ready and willing to lead the mighty Legions of Rome?

You may be willing, but our cadre of Triarii, battle-tested veterans, will train you until you are actually ready you are a Centurion candidate. Before you will be entrusted to lead any of Rome’s legionnaires you need to be trained in tactics from small units to campaign size formations. Tacticum is designed to present different scenarios for you to work through versus an opponent, who could be another centurion candidate or one of the pesky trainers. 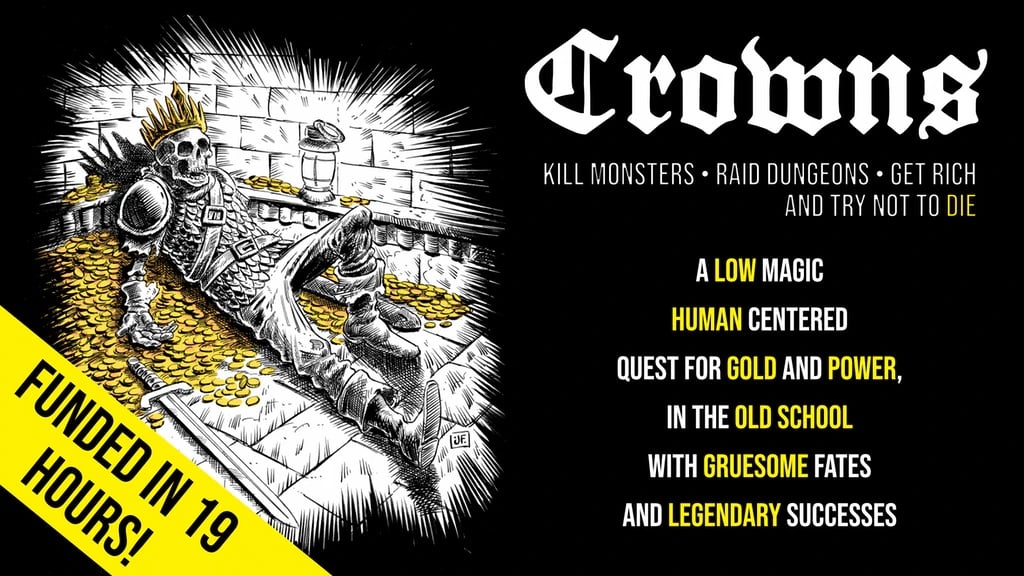 Crowns was made to recreate a feeling of ragtag adventurers attempting to uncover the mystery of lost dungeons full of ancient gold and rob them for all their worth. There is an emphasis on research, rumor-hunting, deduction, study, and using your time wisely. Often the players may not even know the location of the actual dungeon, and instead, explore minor locales that give hints and clues as to what the dungeon may hide inside its carved stone corridors.

It’s easily accessible to new players, while not being burdensome on the GM to completely come up with fresh content thanks to helpful adventure creation tips, reminders, and a factions-play ruleset. 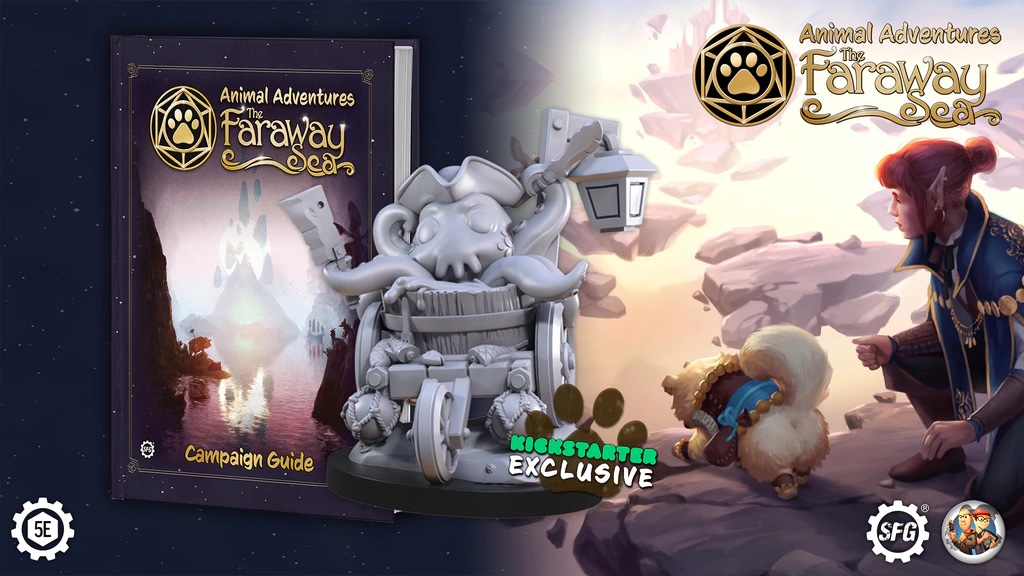 From the team that brought you Bardsung, Dungeons & Doggies, and Cats & Catacombs, comes Animal Adventures: The Faraway Sea! A complete campaign setting for 5e, suitable for beginners and seasoned players alike. 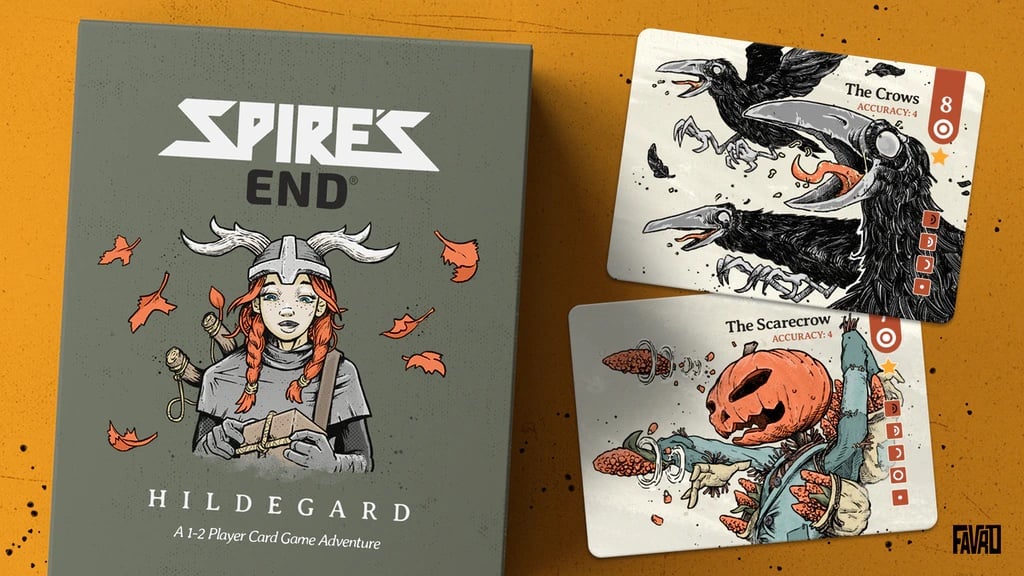 Hildegard is a solo and cooperative card game adventure set in the world of Spire’s End. After the dark and foreboding descent into the Spire, I decided to spin in a different direction. I’ve left behind the cold and the darkness for vibrance and warmth. I’m calling it ‘card game comfort food.’  It’s a different take, but it still fits snuggly into the Spire’s End world.

This is a stand-alone adventure that can be played with or without any knowledge of the previous game. It’s split into 4 chapters, 400 cards total. There’s very little set-up and minimal components. No DM, or character sheets, or major bookkeeping. What you will have is a healthy stack of 400 glorious story cards with over 25 illustrations per chapter, 12 lovely custom etched dice, some cube markers and a rulebook, all in one tight little package. 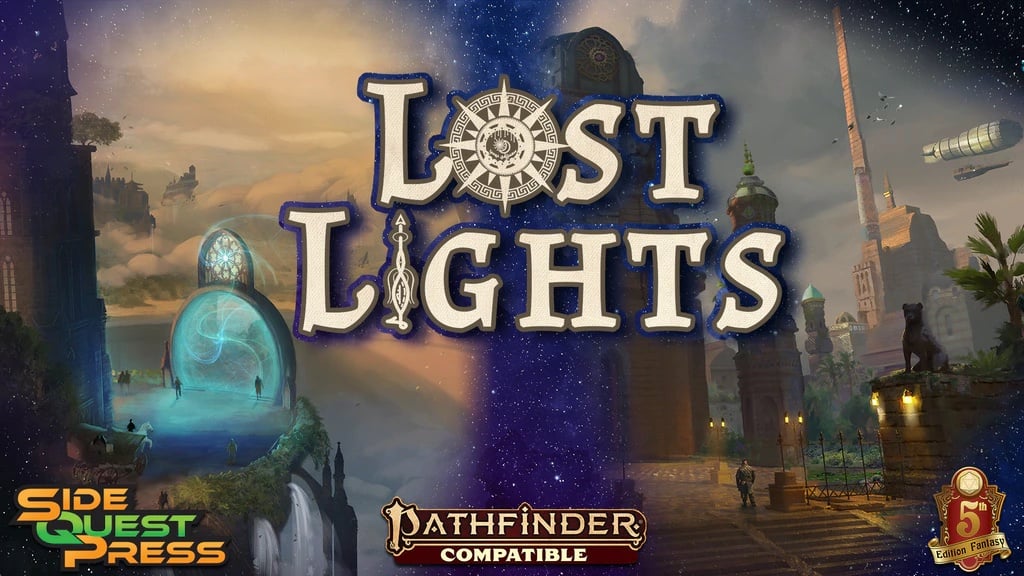 Lost Lights is a new and different campaign setting compatible with both 5e and PF 2E. It spans two primary continents – one populated by scattered societies recovering from a millennia-long war between now-vanished celestial overlords, the other dominated by a vast techno-theocracy trying to cope with the recent absence of gods previously known for their hands-on guidance.

A different and unique inspiration – A shared desire to create a setting influenced by the mythologies of our Middle Eastern and Latin American backgrounds led to the writing of Lost Lights, the setting isn’t just another retread of real-world cultures masquerading as fictional ones. Our setting is inspired by these backgrounds but we’ve taken the opportunity to create something we feel is new and different. We hope you do too! 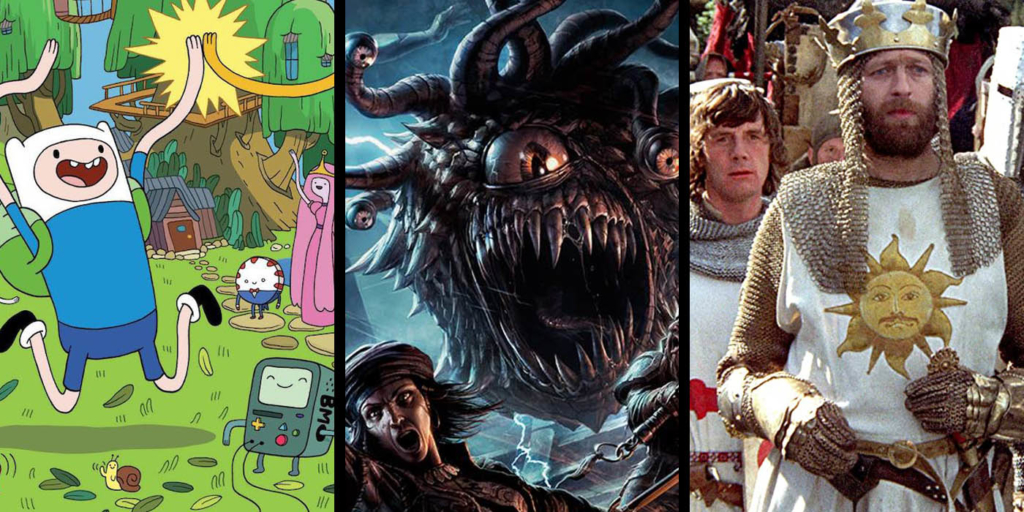