Warhammer: Underworlds – Send In The Crab With These Killer New Cards 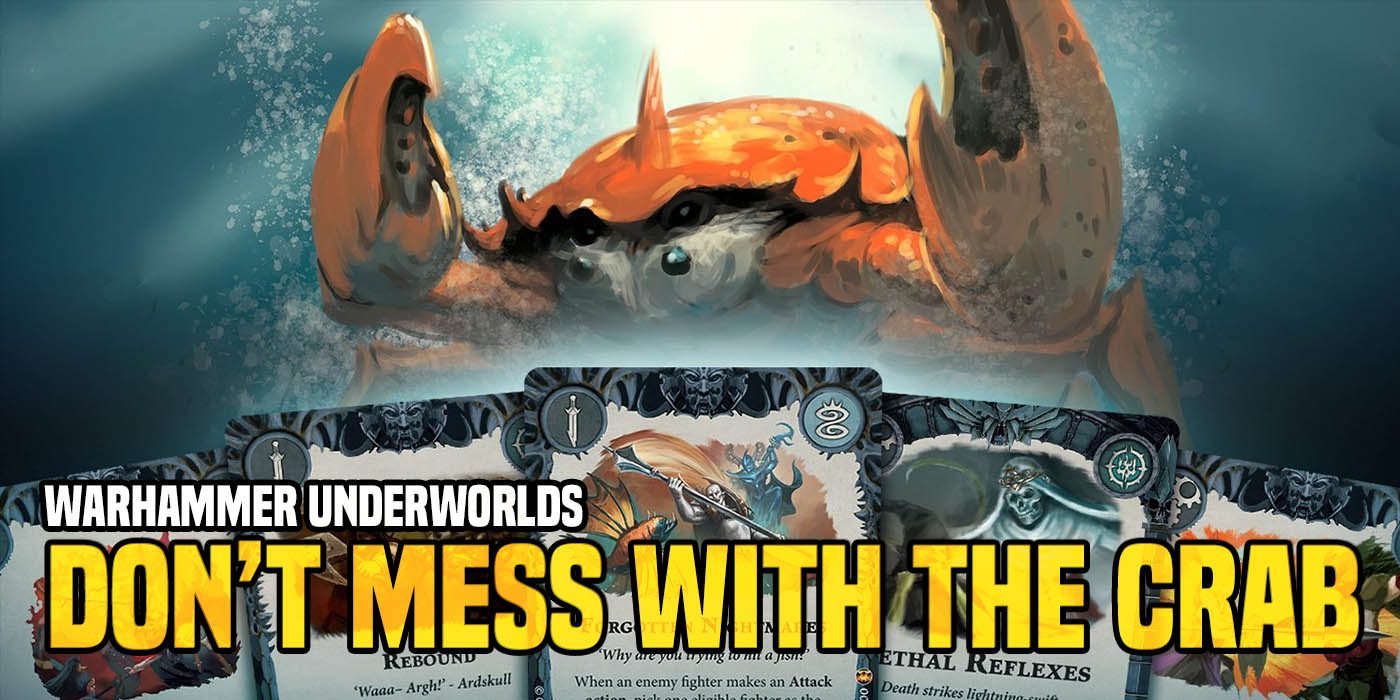 Games Workshop #1 Crab is back and we’ve got some teasers from the upcoming Arena Mortis set that turn Duinclaw into a BOSS!

The Idoneth Deepkin Warband from Warhammer: Underworlds certainly had a break-out star with Duinclaw the Crab. Now, going into Arena Mortis, Duinclaw is a champion that just might surprise a lot of opponents. “It’s just a Crab.” Well once you stack your deck with these cards, Duinclaw will show everyone exactly what a Crab can do. 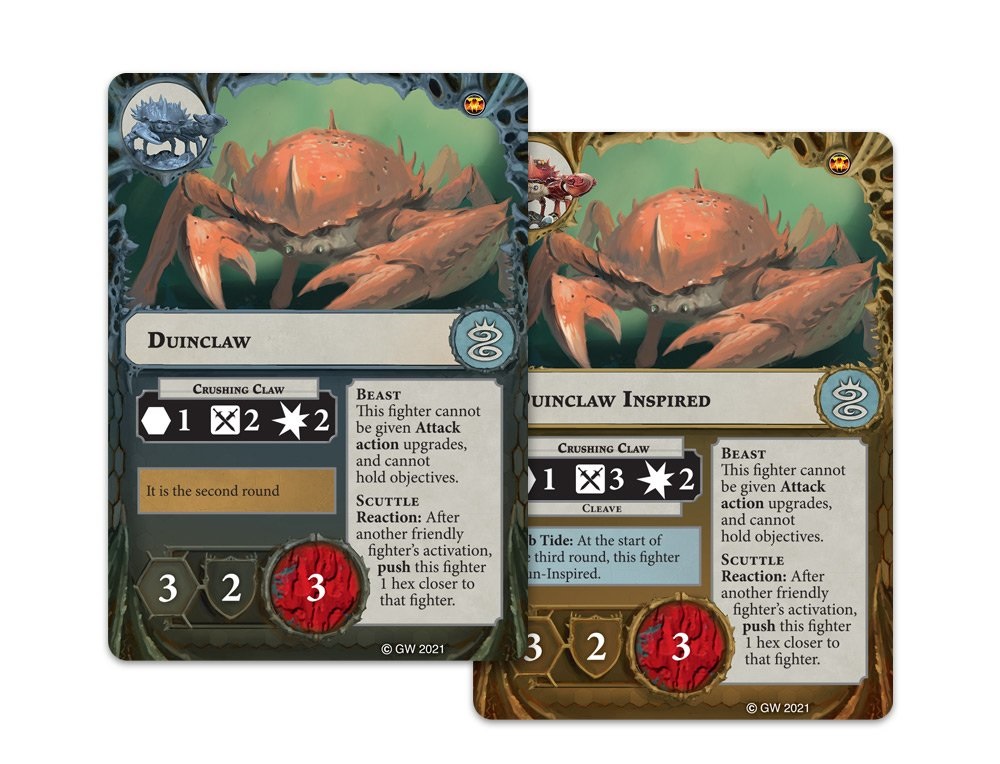 “In games of Arena Mortis, you pick a single champion to take into battle rather than a whole warband. This change makes the process of building a deck very different to your standard games as your priority becomes keeping your prized warrior alive. “

Today, GW is showcasing a handful of new cards from the Arena Mortis Pack. These cards are great for Duinclaw, but the crab isn’t the only one who could benefit. We’ll let you sort out who you think could really be the best Arena Mortis option later. For now, let’s just focus on these cards. 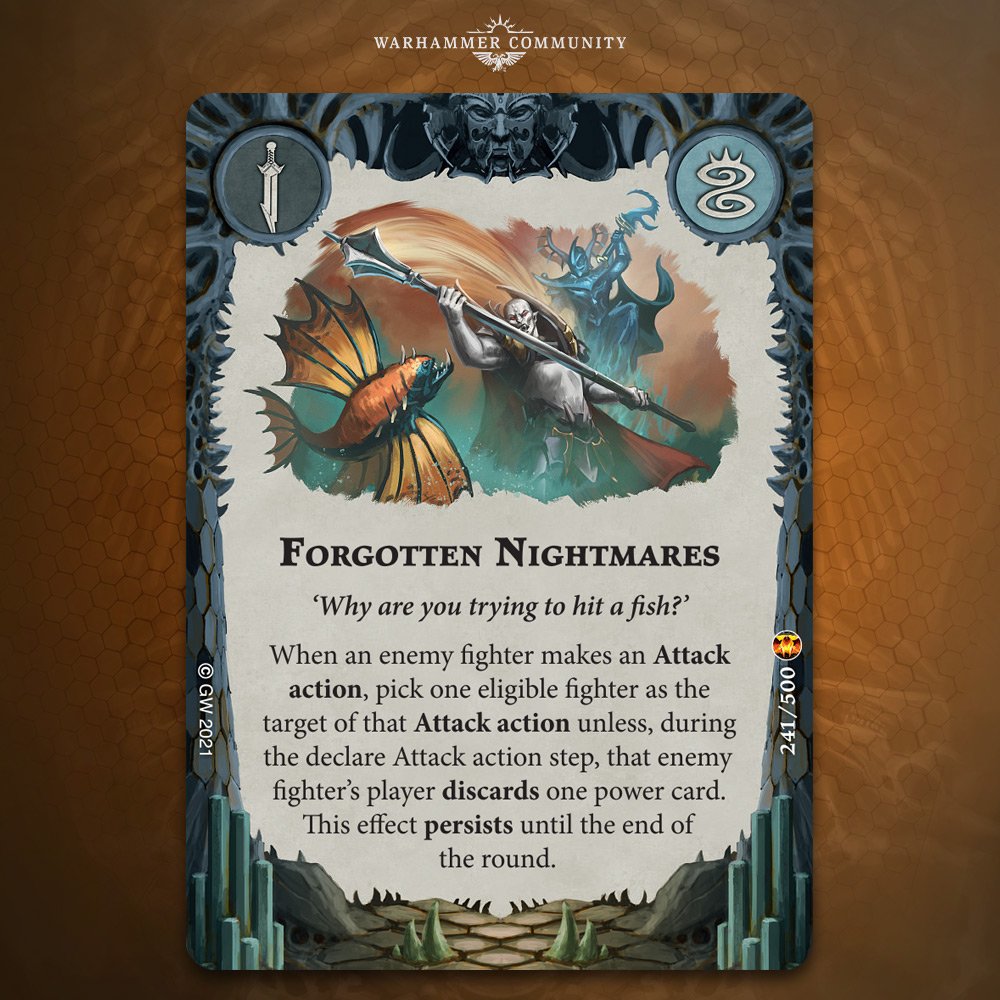 Forgotten Nightmares is a great card to include – it’s Idoneth only, but we’re talkin’ about Crabbie McClaw here, so of course you should include it. It forces a discard of a power card by your opponent if they want to attack. Keep in mind that Arena Mortis is multiplayer as well. So this will penalize your multiple opponents for attacking the crab – and with all those OTHER targets to attack, maybe they will just ignore Duinclaw in the first place. 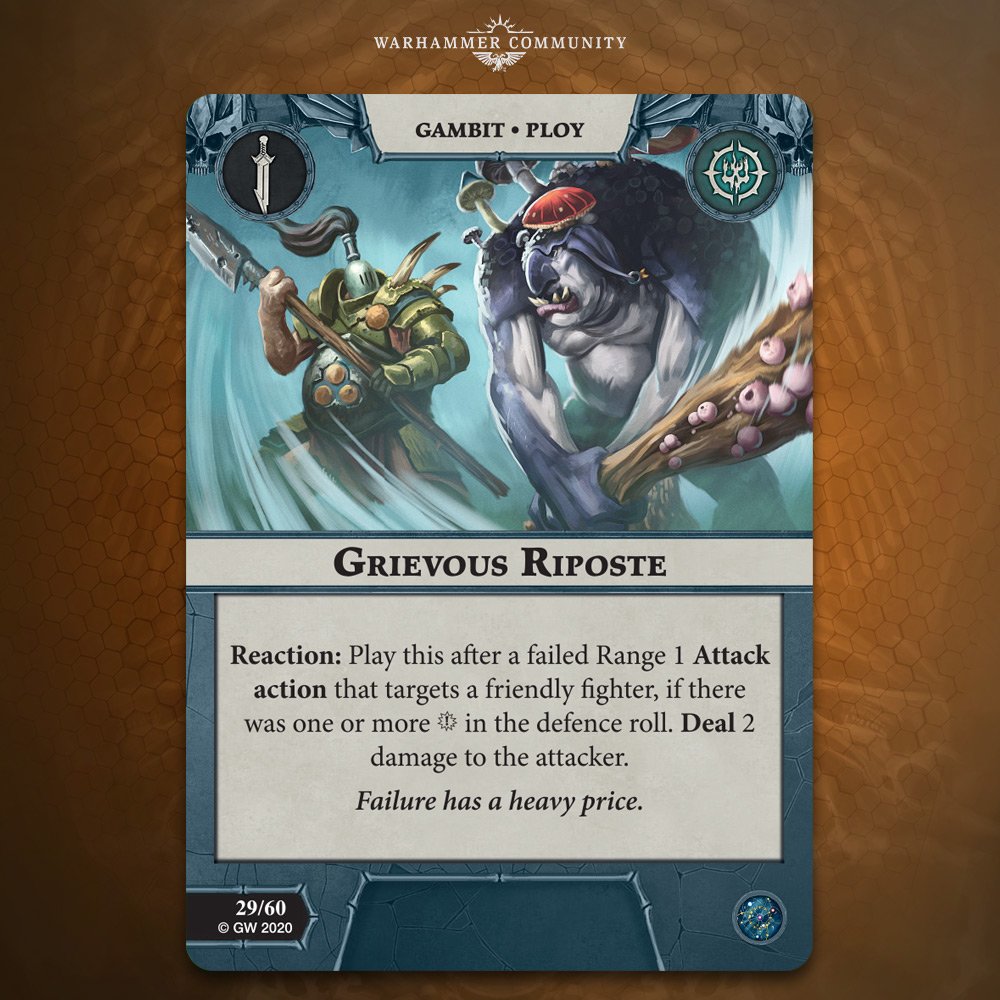 As a general gambit card, this one is great to have in your hand when you’re getting attacked. if you manage to successfully defend with a crit in your roll, slap the attacker for 2 damage in return! 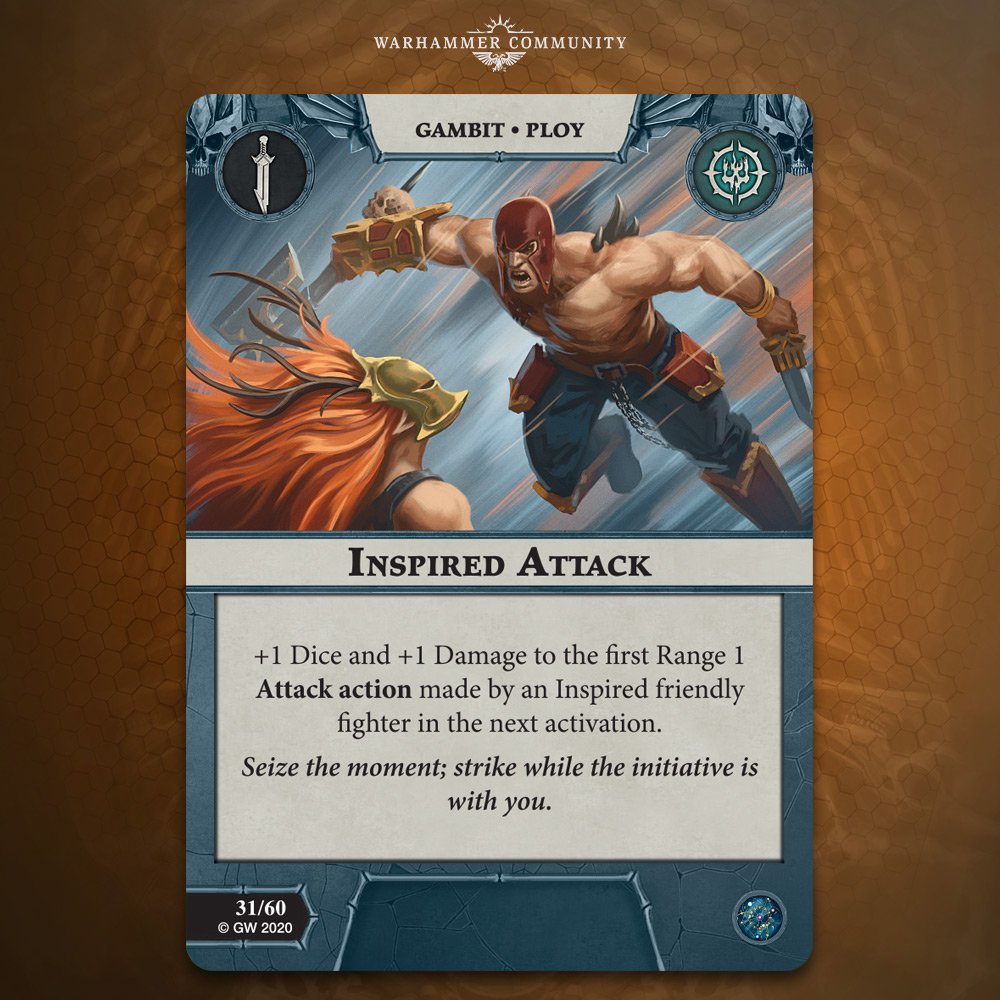 Another generic gambit card this one works well in any deck. +1 Dice and +1 Damage is just good stuff all around. 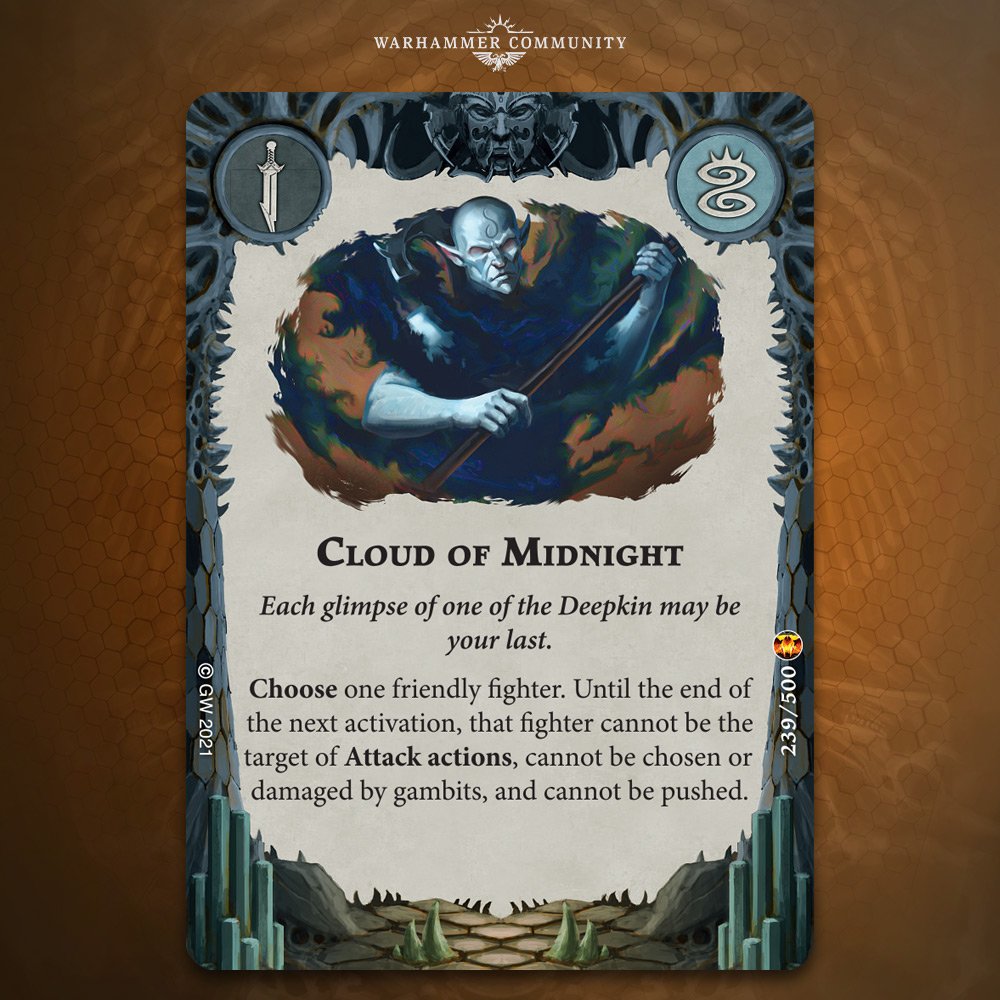 When you’re fighting multiple opponents and you really need some defence, the Deepkin cards are your friend. Keep Duinclaw alive and uh…clawing with Cloud of Midnight. Now, none of your opponents can hit the mighty crab! For a turn anyways. 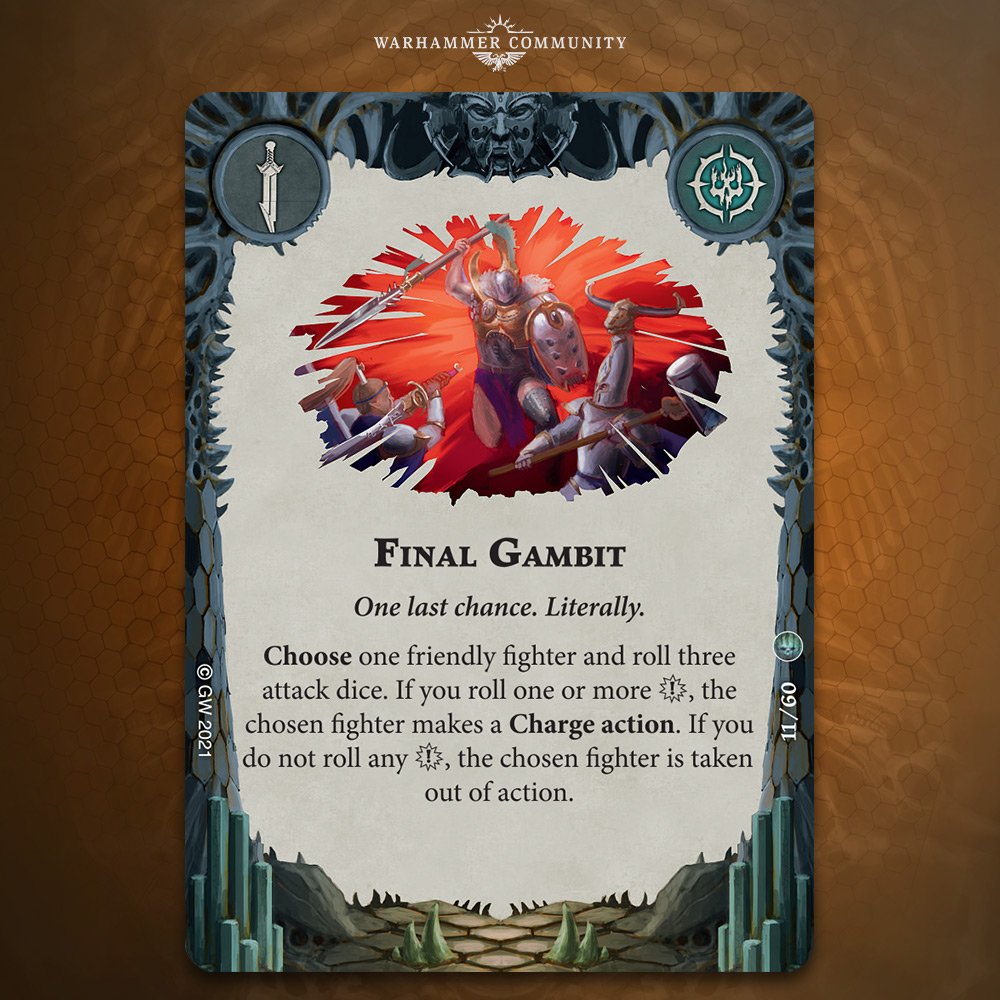 Sometimes, you just gotta go for it. Final Gambit is quite literally the epitome of going for it. Roll 3 attack dice and go fishing for crits. If you get one, you get to make a charge action! If you don’t, well, you’re fighter is taken out of action. It’s kind of in the name. 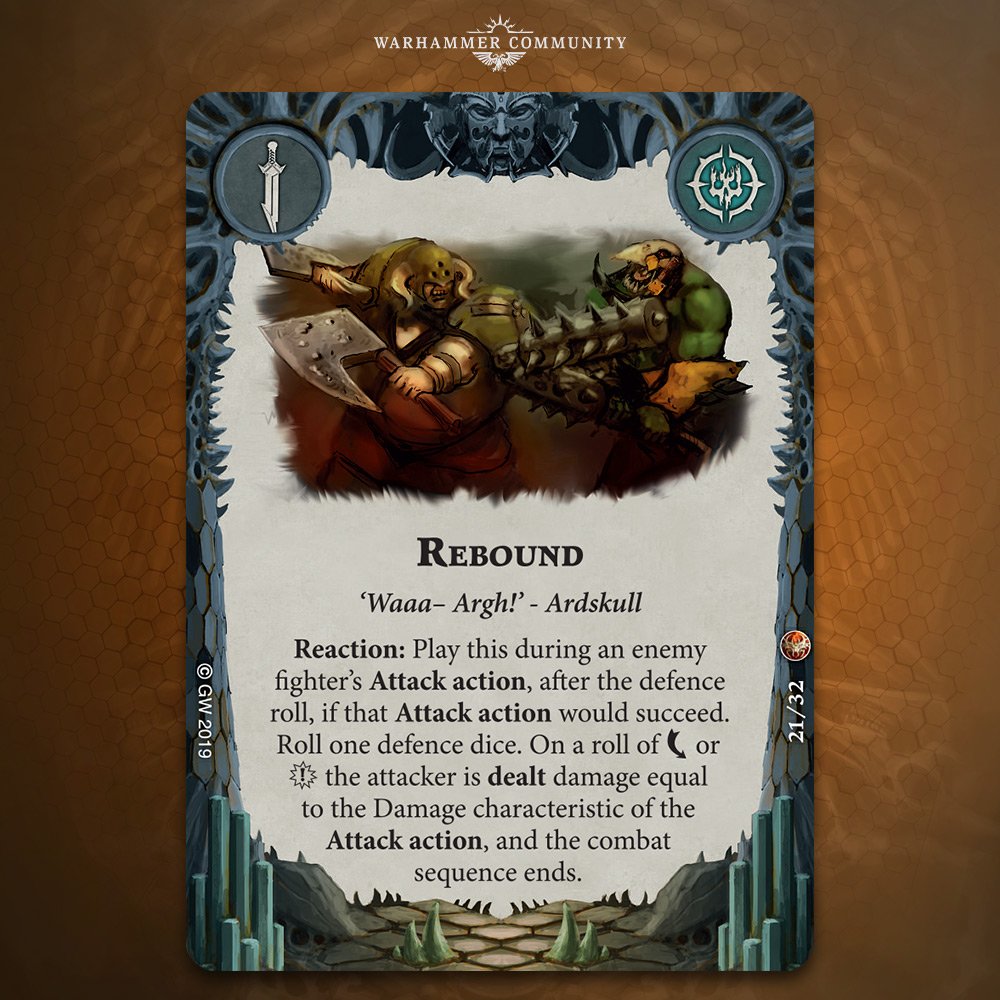 In Arena Mortis, you’re going to get hit. Sorry – it’s just a part of the game. Now with Rebound, you can at least make the enemy fighter pay for it…in blood! 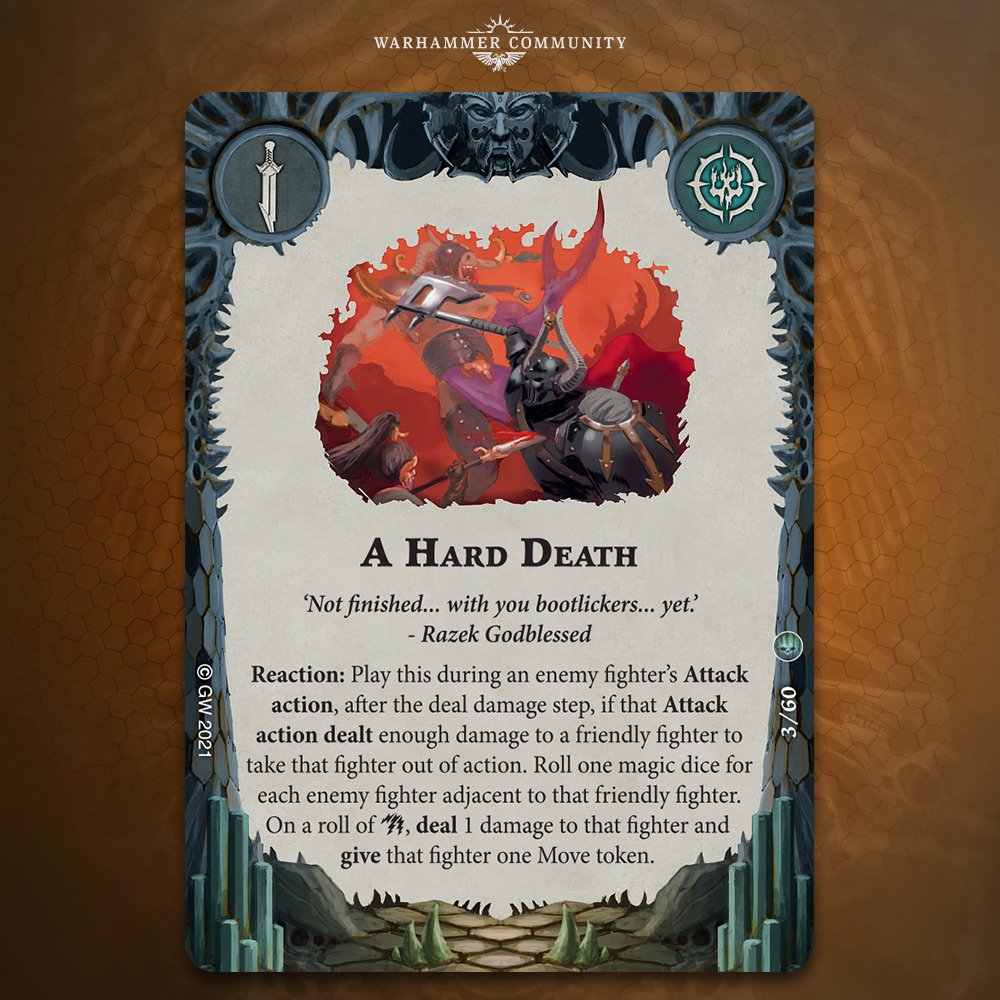 If you’re going to go out, go out with a bang. A Hard Death gives you a chance to make one final stab at the enemy fighters. Ideally, you’ll be in the thick of things so you can tag multiple enemies with 1 damage and a move token. Hah…you’re stuck in my crab guts.

And finally, we have a trio of upgrade cards recommended for Duinclaw as well: 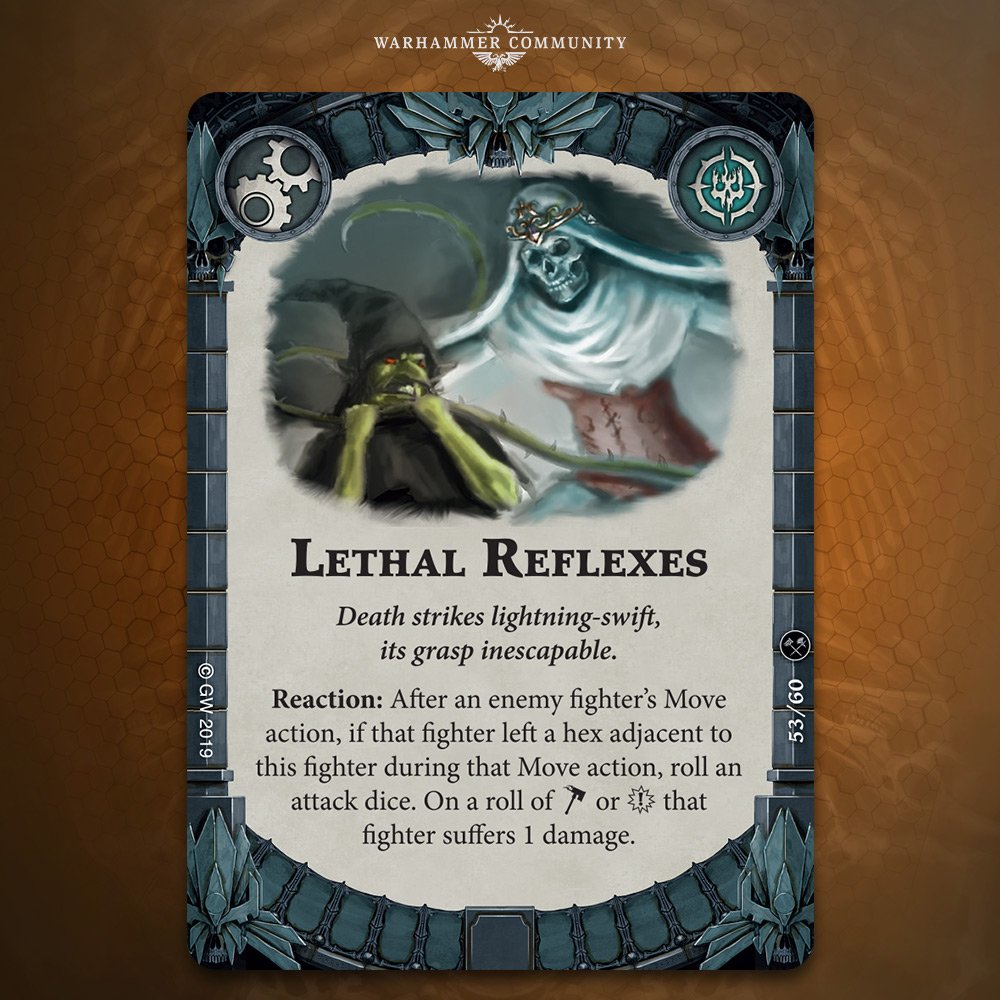 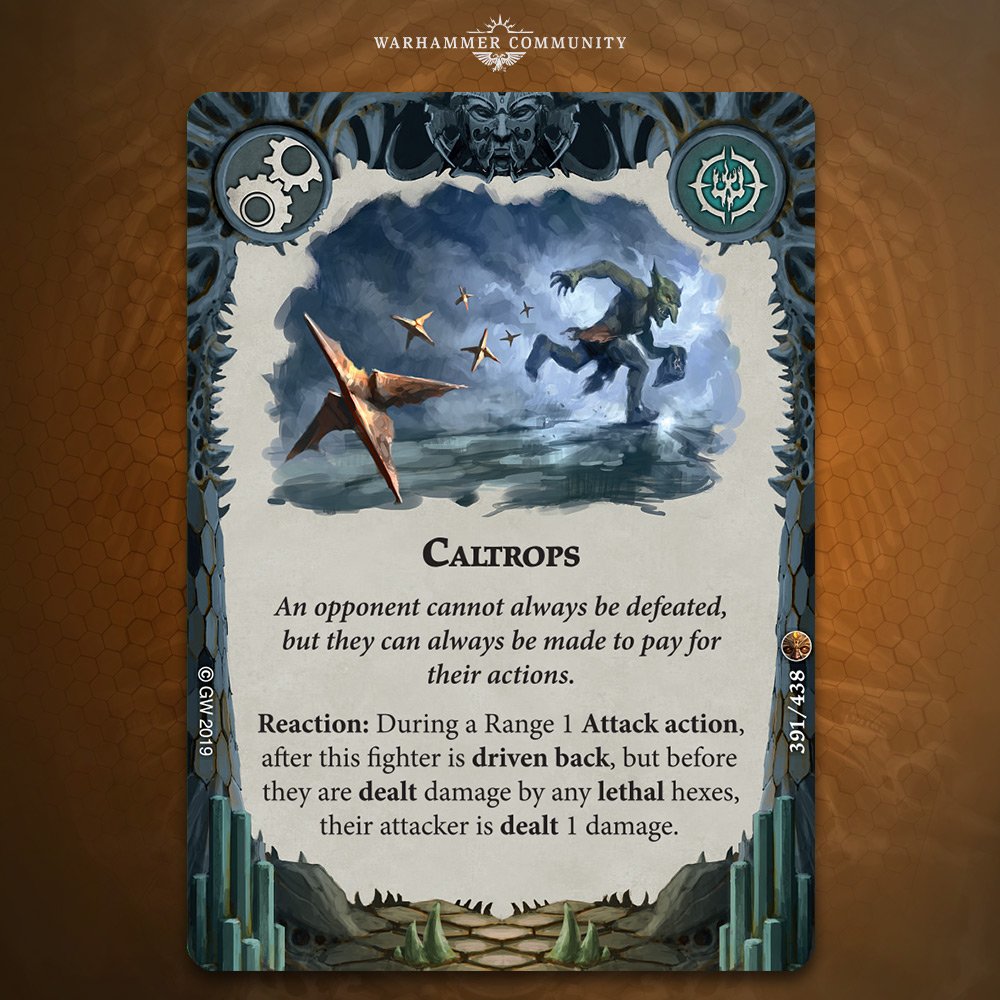 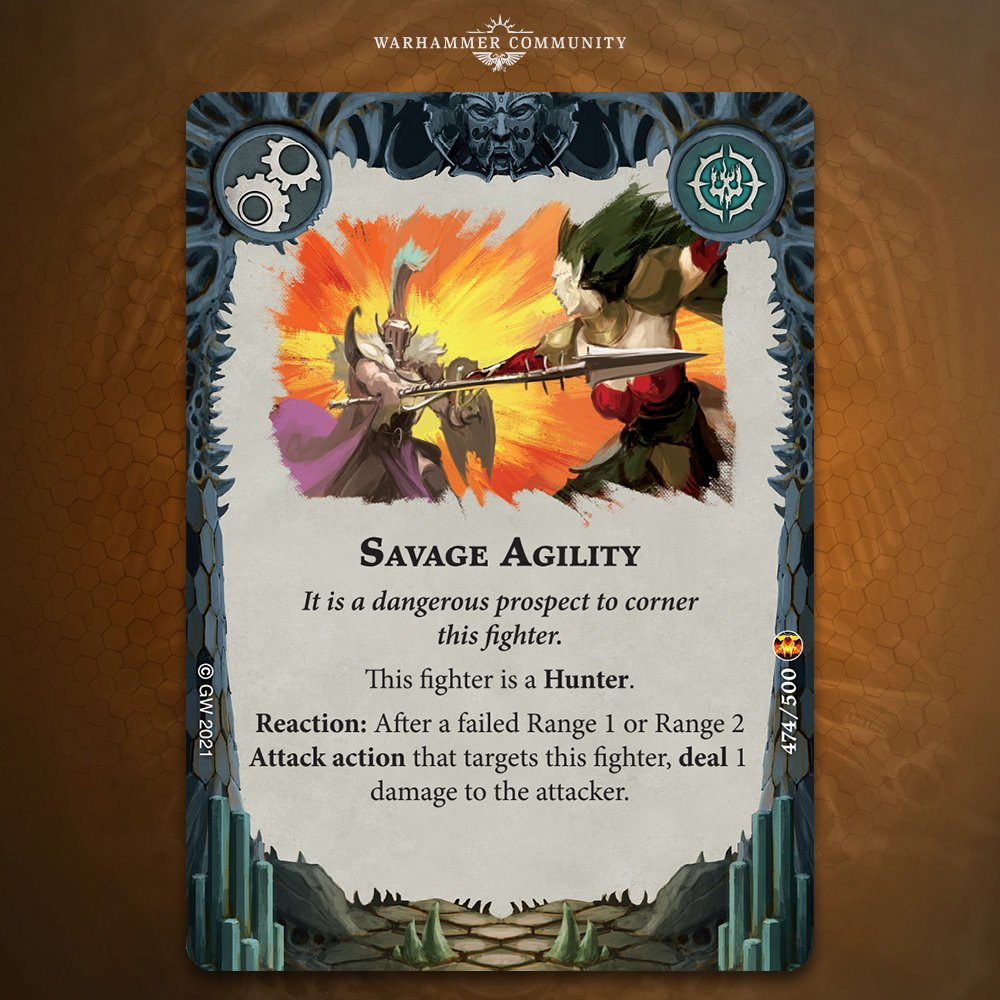 “Caltrops, Lethal Reflexes, and Savage Agility are all pretty sneaky. These cards cause damage to anyone who dares to come near or attack Duinclaw – don’t they know who this crustacean is? These kinds of upgrades are great because they mean that Duinclaw is dishing out the damage even when it’s not your turn.”

Overall, while this “build” is mostly focused on the Crab, it’s got some good ideas in there for an Arena Mortis game. Will you be the hyper aggressor with your champ? Will you go sneaky or defensive? Or will you try some other clever ploy to stay in the fight and score a win? Arena Mortis goes up for pre-order next month and playing the game is a great way to find out.

Which champ are you looking at for Arena Mortis?

Author: Adam Harrison
Writer, Editor, Texas Native, and Austinite for 15+ years, Adam covers all things Tabletop Gaming. Which includes Warhammer 40,000, Age of Sigmar, D&D, Board Games and everything else that involves dice, boards, cards and a table. A hobbyist, player, and collector of miniatures and games, Adam's current obsession are his Death Armies for Age of Sigmar, his Blood Angels and Tyranids for 40k, and his ever growing Arkham Horror: The Card Game Collection.
Advertisement
Age of Sigmar Games Workshop Miniatures Warhammer Underworlds
Advertisement