D&D Monster Spotlight: You MUST OBEY the Intellect Devourer 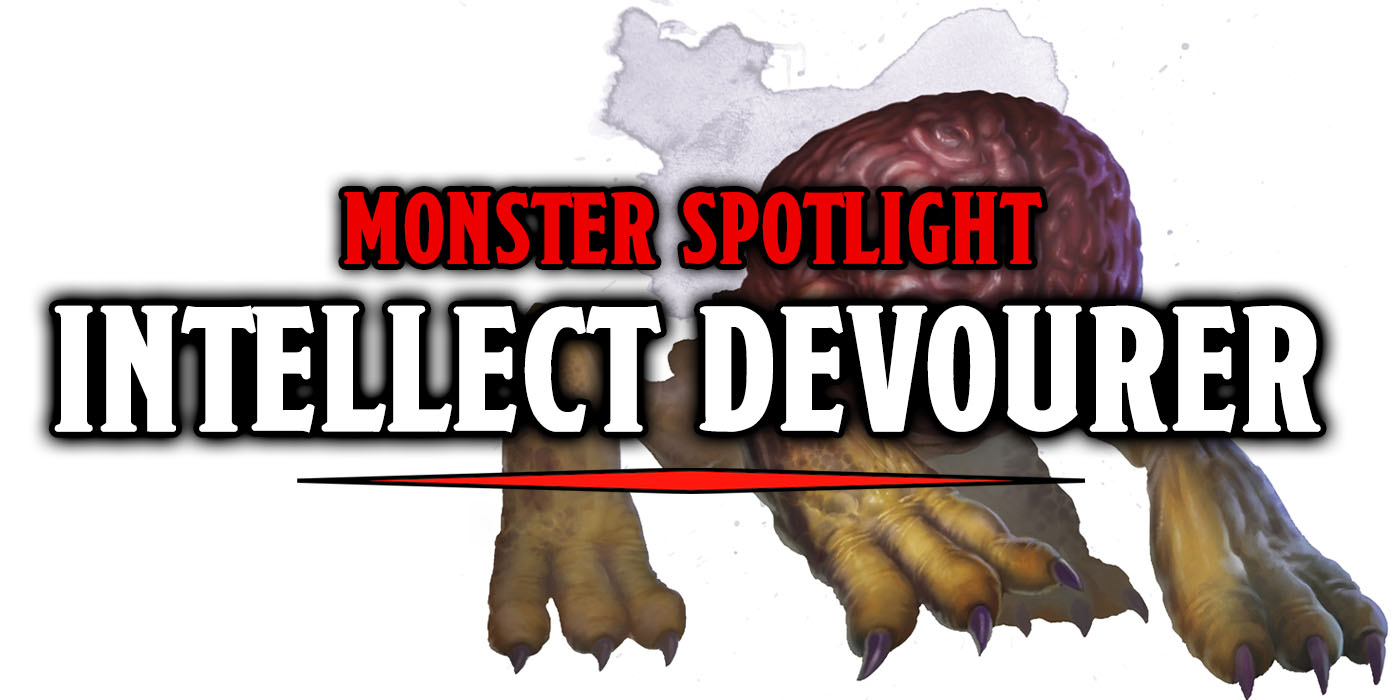 Because the darkest caves aren’t full of enough horrors, be careful not to be blindsided by the illusive Intellect Devourer or you may be their next puppet. 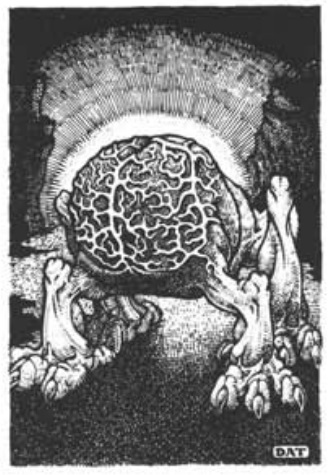 On the surface, the Intellect Devourer is pure nightmare fuel. They are medium sized monsters that look like giant brains on four muscular legs with sharp claws, and to make matters worse they live in deep dark caves and will use psionic energy to stalk their victim until they are alone or unsuspecting of an attack. Sometimes they will take over their victim’s body, seeking to assume the life of the person they’ve slain for long enough to create an opportunity to attack their companions and in turn devour them as well. Intellect Devourers can hide as well as a 10th level thief, are impervious to many weapons and spells, and have awareness of the astral and ethereal planes as well as the material one, and while they are capable of understanding and speaking any human language, with a chaotic evil alignment they probably won’t listen to reason. 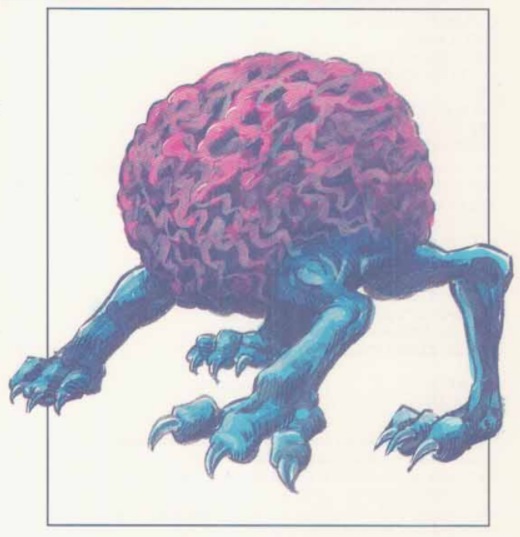 Second Edition Intellect Devourers seem to a be a little smaller than their First Edition cousins, with roughly “brain sized” brains, but their use of psionics let them alter their size – or at least your perception of it. They also now have a three foot tendril in front that they will use to strike and poison victims. Still, an adult Intellect Devourer prefers to use psionic attacks when possible. These attacks are constantly in effect and cost no PSPs, but count as psionics for detection purposes. Mind Flayers have been known to raise Intellect Devourers either as food, pets, spell components or some mixture of the three. Because Mind Flayers. 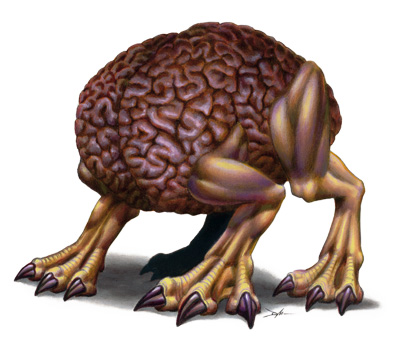 Back to being largeish on a normal basis, Third Edition’s Intellect Devourers are roughly dog sized, and I doubt they mean tiny purse dogs. Still stealthy, they now use cloud mind and compression to  keep a potential victim from perceiving them until it’s too late. Their attacks are by and large the same as before, using a mixture of claws and psionics to take an enemy down, but they now may embellish a physical attack with painful strike, making it seem worse. Once an Intellect Devourers has consumed their victim’s brain, they can take over their body for up to seven days, combining all of their psionic abilities with the body’s original physical qualities. There’s a Weekend At Bernie’s joke somewhere in there, but it feels a little too dark. 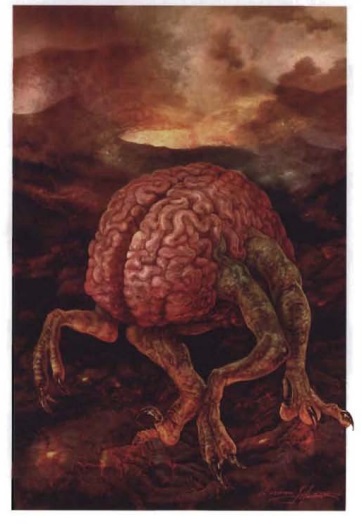 In their larval form, Intellect Devourers are known as Ustilagors, rat-like vermin monsters that skulk in the shadows and feed off of the psychic energy of larger creatures. From there they evolve into Intellect Predators, which seem closest to the Intellect Devourer that we are familiar with from pervious editions. Then they evolve further into the Intellect Glutton, a truly horrendous monster with spiderlike legs who’s form may or may not show the faces of their previous victims. By this point they don’t need to merge with their victim and instead just siphon their mind from a distance while forcing the adventurer to attack their own allies or even stay in play after their death. 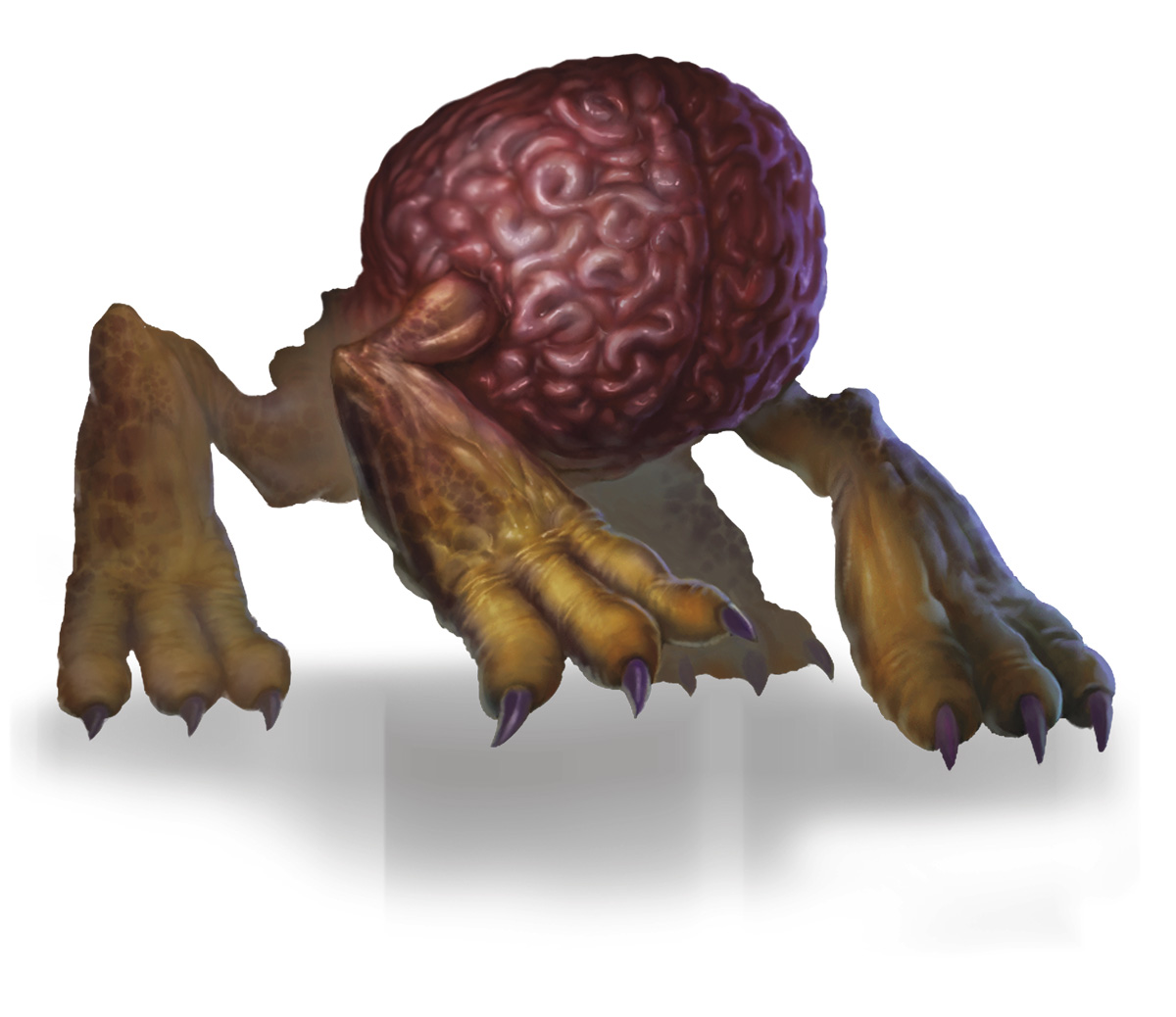 Mind Flayers not only keep Intellect Devourers as pets, they create them by taking the brain of a thrall and subjecting it to a terrible ritual. They can detect any creature with an intelligence of at least 3 within 300 feet unless they are specifically using the spell mind blank. Being that the Intellect Devourer is created by Mind Flayers, now they will use victim’s whose bodies they have taken over to lure more adventurers to the domain of the Mind Flayers either to be enthralled or consumed.

Have you encountered a Mind Flayers in your adventures? How did your party defeat it? Did you lose anyone to their mind puppet ways? Let us know in the comments!