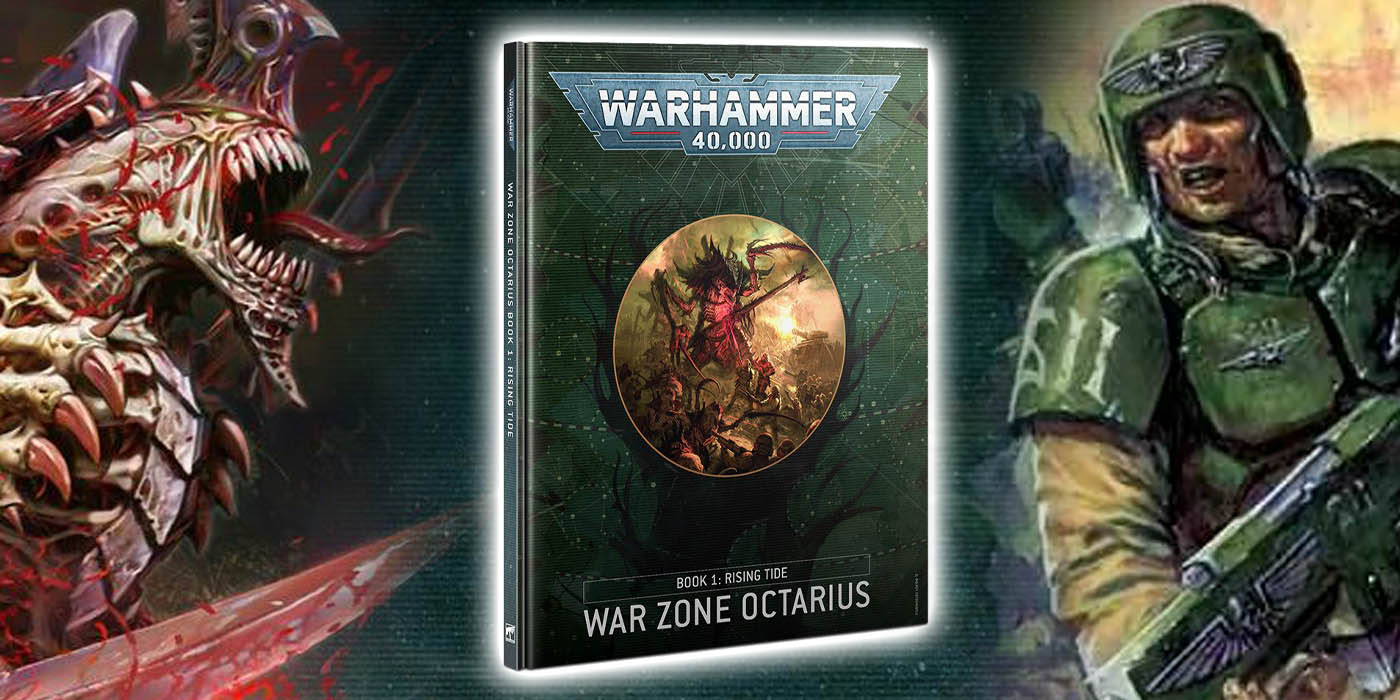 Goatboy here to go over the new Warzone Ocarius: Rising Tide – The Good, the Bad and the Ugly.

One thing I am frustrated with this book is the lack of Orks.  Orks are here and the Nids are fighting them and some AM are coming as well as some Deathwatch.  So where are my dang Ork stuff?  Like give us a crazy Snakebite thing?  That would be cool right?  Or some kind of pure Squig rider army that is super sweet like the Cult of Strife.  So while we didn’t get Orks we did get 3 new sets of rules for the Cadians, Deathwatch, and Tyranids.  As usual I will go over broadly the good, bad, and ugly about this book for those interested.

We get some new rules!  I always like new rules and while overall I don’t think they are going to be amazing they do represent some interesting thoughts and maybe some avenues for upcoming releases.  The Two new Supplements are simple which is always nice but don’t seem crazy powerful.  I am happy for that as it won’t create a weird meta tornado of doom as players go out and try to find Cadians or more Nids. They both look to add to the game instead of just making the game not nearly as fun.

Cadians get 3 new Warlord Traits, 4 Relics, and 7 new Stratagems.  I like the Steel Discipline Warlord trait as it lets any unit within 6″ of the Warlord shoot after performing an Action.  This could make for some neat Banner Bearers as they get an order to shoot stuff after putting up the flag.  On the Relic side we got a super awesome Vox Servo Skull that might get really good in an updated codex (Increase the range of orders to some insane ranges) and of course a Relic Battle Cannon that hates Chaos.  I wish the Battle Cannons would just get a flat 6 shots for being a Relic but that is just poor little ole me who loves to roll 1 shot. 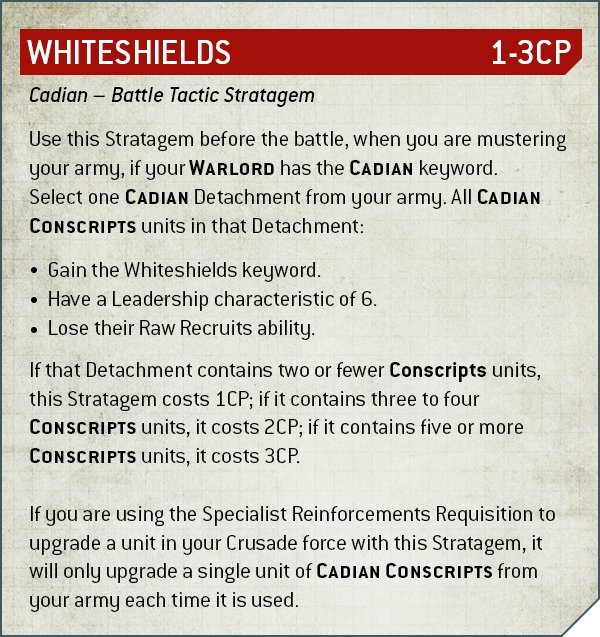 On the Stratagem side of things we have the already previewed Whiteshields to make conscripts better, a Cadia Stands! strat to let a unit get tougher, a counts as Remained Stationary Strat for Cadian units (Seems good for Tanks), exploding 6’s for blast weapons on a Vehicle, get objective secured ability on a unit (Again seems good for Tanks), and an interesting Psyker option that could be more powerful if AM get a really reworked order based system.  That last one is something I expect as it fits in with the whole – make what they do more interesting and better.  The Ole Guard loved giving and taking Orders so I expect that to be the sweet jelly to make them unique in a world of genetic super soldiers, crazy aliens, and daemons from another dimension. 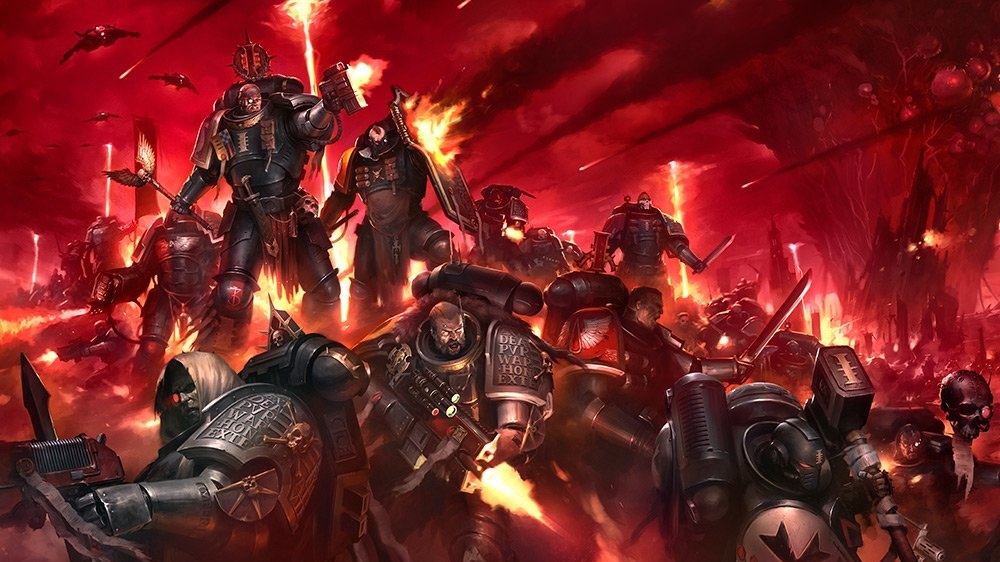 That is basically it for the Guard so there isn’t any kind of Armylist of Renown.  That was saved for the Death Watch and their very Death Watch army of Renown.  The basic set up is that you can only take Kill Teams who have a Specialism and the vehicles that can drive them.  They gain some new Keywords and their character can switch to a Chapter Tactic/Successor tactic per turn and not duplicate it.  So you could have a White Scars turn with Advance and Charge or another turn of +1 to wound.  This seems fun and unique which I always like for a Space Marine army.  You get a warlord Trait to let you get a sorta stacked set of Tactics with Xenos Hunters and whatever one you choose as well as a weird relic that lets you change your Mission Agendas after the game.

You also get 4 Strats to use with a 3CP one that lets specific Kill team auto wound on a successful hit roll.  It can only be used once per battle but it could be a bad time with a ton of Bolter hell coming at a unit for a turn.  I like the Strat that lets you pull a unit off the table and put them back on table the next turn.  This could make for some fun turns as you move things around the board.  They have a cause Mortal wounds on a 6 to wound strat with the auto locked in rule of maximum 6 damage.  Overall they are ok.

The last of the new rules we get are the new Leviathan Supplement and an upgrade Synapse like set of rules for Nids.  We again get some Warlord Traits, some Relics, and Strats as usual.  I always like the Chapter Master like Warlord trait for nids as they can get big units with a ton of Attacks and having full reroll’s to hit seems good.  On the Relic front the Biomorphic Carapace lets the bearer have -1 to wound against them and the Synaptic Hive Blades ignore all invulnerable saves which both seem good for your Hive Tyrants.  I almost wish one was a Warlord  Trait to allow you to make a brutal beatdown machine. 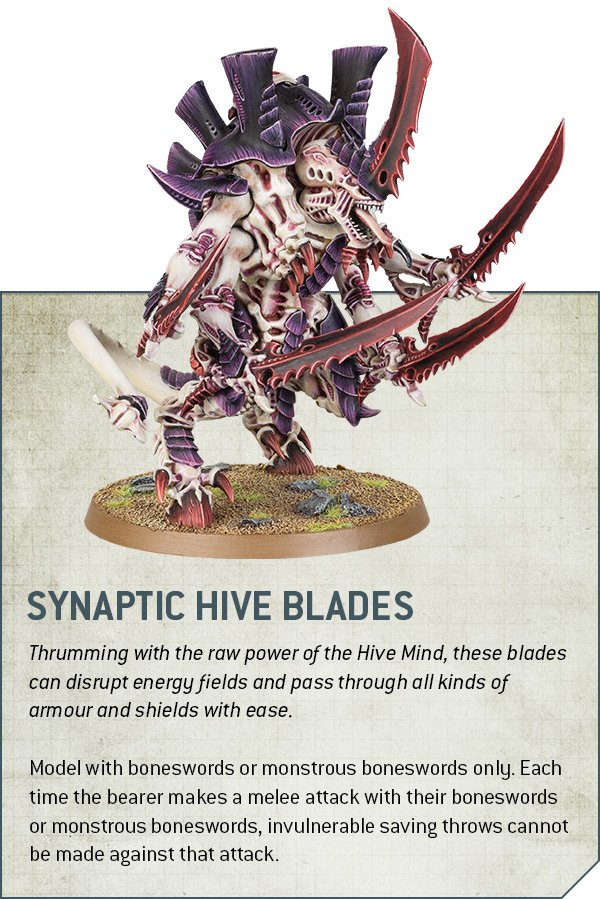 On the stratagem side of things the exploding 6’s option that becomes a double exploding when the unit is over 11 models seems pretty hot.  I love to throw in a ton of dice for an attack and this is one way to really make it go crazy – especially with rerolls to hit. There is a fun set up a unit on the battle field like it is Turn 3 which seems good. Auto exploding after getting killed also seems fun too as you throw you big gribblies into their lines.  You can give a unit objective secured in your Command phase which seems decent too especially if they already have it and now counts as additional model and can shoot after performing an action.  These double ability Strats feel very useful.  Of course we have a shooting Strat that lets wound rolls of 6 cause up to 6 mortal wounds with Fleshborer’s etc.  This seems to be a consistent new Strat all armies are getting.

Finally we get a new set of Synaptic Link rules that are interesting.  They feel a bit complicated but a much more unique way to showcase Synaptic powers for the army.  I had heard Nids are having a big set of new changes coming and will play like a new army and these set of rules really push that.  Basically as long as all your Synapse creatures are within 12″ of each other they can push out a Link Ability to any unit within 12″ of all the Synapse creatures.  It creates this weird Wireless Mesh network hivemind basically that lets you give unique rules around the board.  Each of the upgrades have a point cost to upgrade that unit.  The Tyranid Warrior one seems good as it gives the unit a +1 to hit which feels powerful.  There are some others that are not amazing abilities but on big units they could be unique.  A lot of them allow rerolls or other simple abilities that again are really dependent on what you get to throw them on and while the abilities are locked into certain Synaptic units it looks like you can give it to any unit as long as they are within range.  This feels neat and it will take some time to see if anything is crazy amazing.  I can see Hive Guard loving some of these things too.

There are a lot of reprinted rules in this book, such as the Inquisition section.  In fact it is mostly reprinted things and while it is neat for new players it isn’t like these rules are not going to be wiped out whenever they get an updated book.  I feel like I would rather just see a big ole “reprint” book that has a ton of this stuff like the FW book and just make it cheap and easy for new players to get ahold of.  Reprinting it just feels a little bad as a lot of us have it.  The App had a lot of these if you pay for it so I am hoping they stay instead of disappearing behind a new Online code to unlock it if needed.

With the Cadia rules and the Tyranid rules in here it makes me think those releases are not coming for awhile.  I don’t know why but these little bandaids onto your armies just make me hungry fo the actual rules.  Chatter says Nids should be coming before long and I hope with some more unique ways to play them that make it feel like a living breathing army designed to consume the battlefield.  Will just have to wait and see especially with this age of late shipments, release date shifts, and just long periods of sad panda players playing with meh armies. 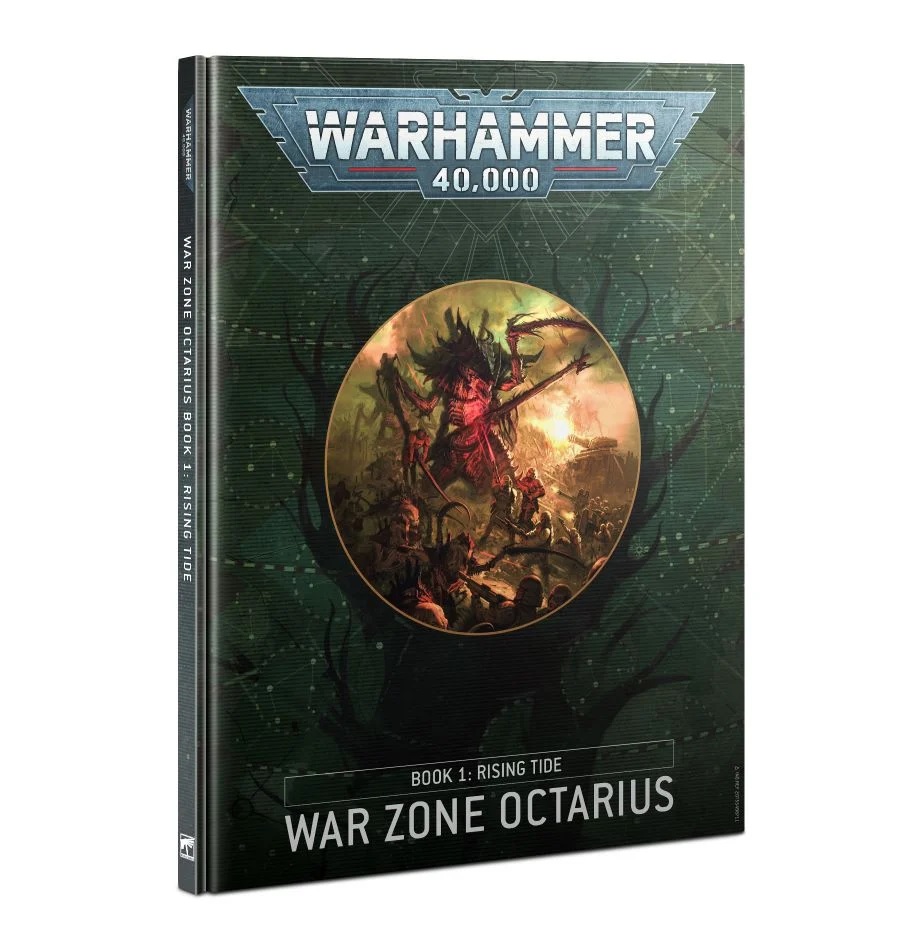 Author: Thomas / Goatboy
Thomas Reidy, aka Goatboy, the ever-evil member of BoLS. I do arts, play 40k, and even paint a lot of stuff. I have been playing Warhammer 40K since the 1990s, and have won multiple national events including Adepticon and GW GTs. I've been writing for BoLS for 15 years. Look at my Instagram to see what I am working on - or working on for someone. I am always doing something hobby related.
Advertisement
Rules Warhammer 40k Warhammer 40K 9th Edition
Advertisement