Grab Your Booty And Play ‘Broadsides and Boarding Parties’ 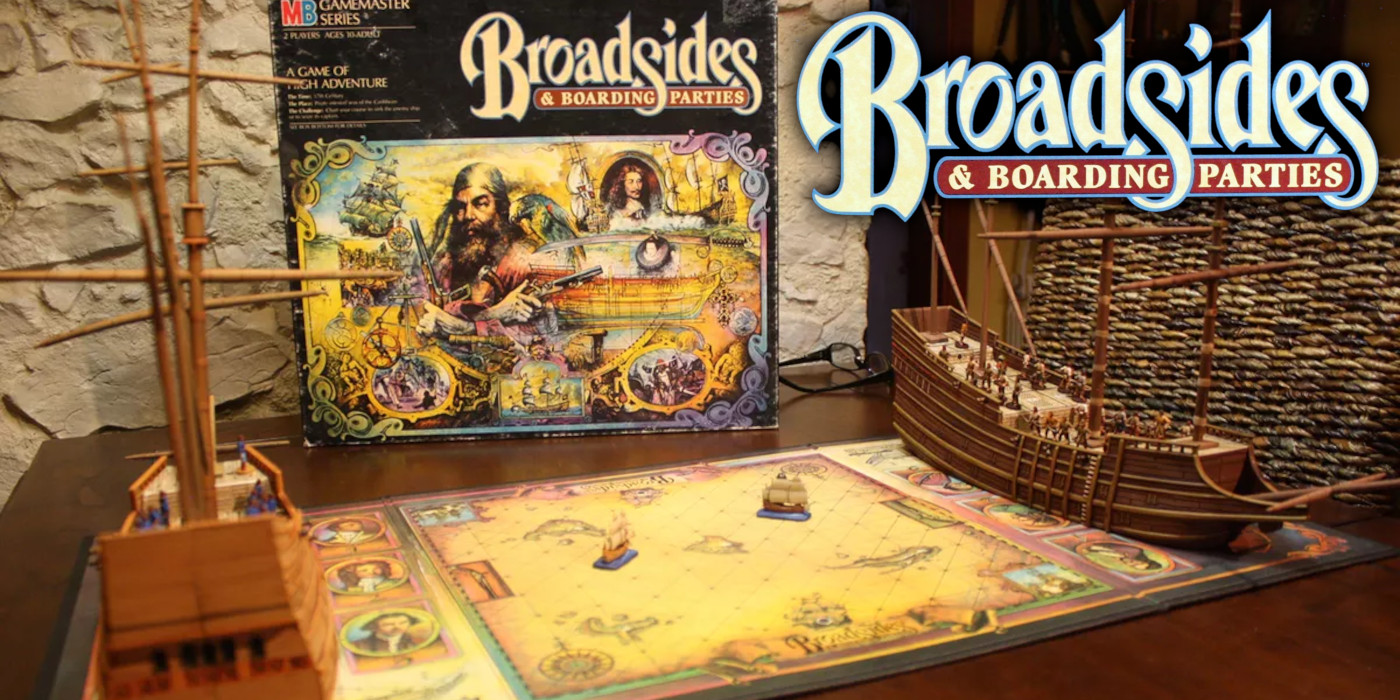 Visual spectacle, adventure, and fun create the ultimate pirate experience. Put on some sea shanties and get ready for Broadsides and Boarding Parties, matey!

Broadsides and Boarding Parties is one of those games that doesn’t just look great– it isn’t bogged down by overly-complex maneuvering rules. This adventure game keeps things simple and fast-paced. It may be aimed at kids, it’s got enough going on that it can be easily enjoyed by players of any age. 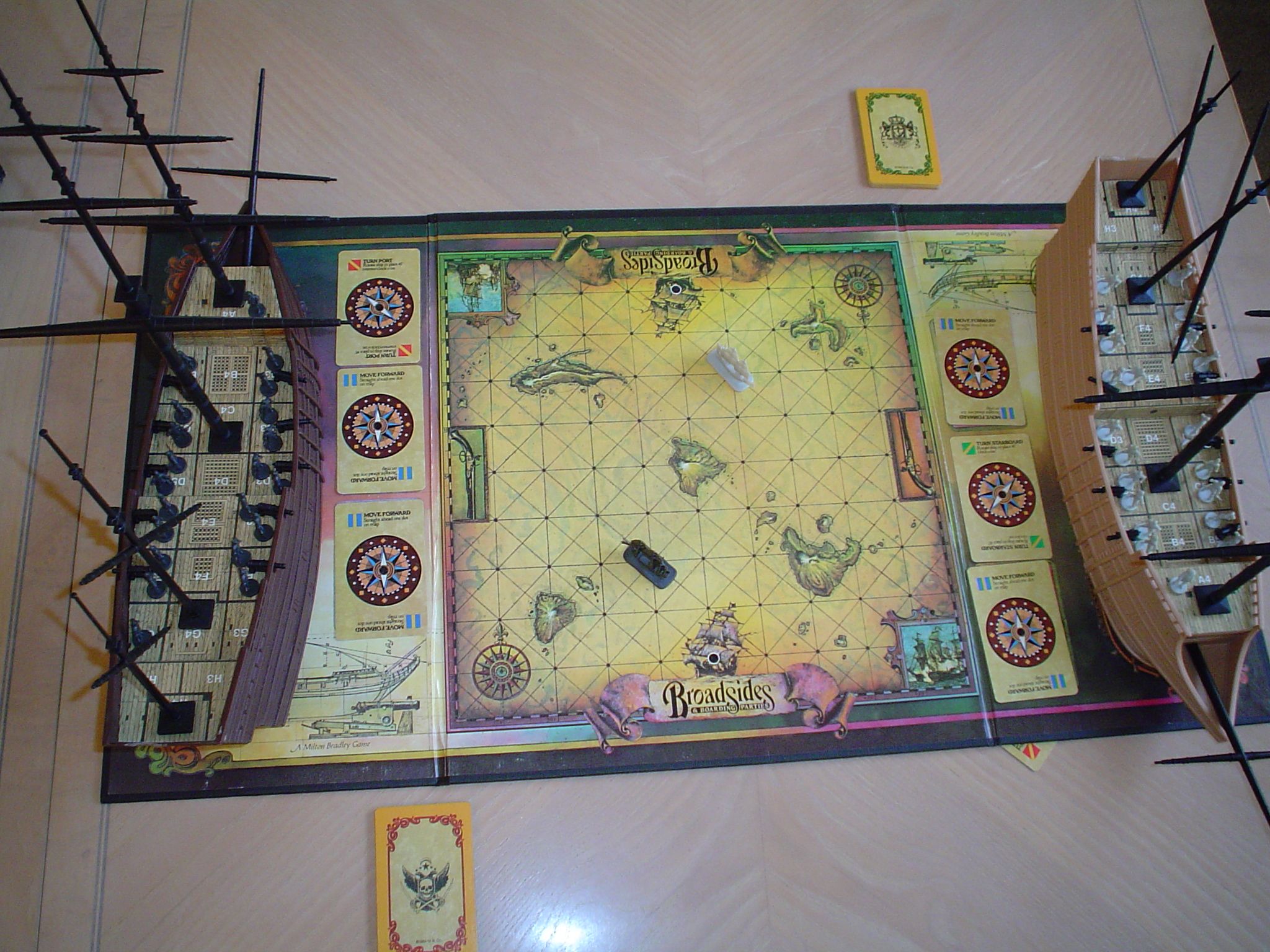 Broadsides and Boarding Parties is a competitive two-player tactical combat game that was released by Milton Bradley in 1982 under their Gamemaster series alongside games like Conquest of the Empire. The game works on two levels.

First, players start by controlling their ships. They maneuver their ships and fire their cannons in an effort to soften up the enemy before ramming the ships together.

Once this happens, the second phase of the game begins. The crew then charges the enemy ships, and players engage in hand to hand combat! No, not literally. But the title of this game is not only dramatic, it’s also very descriptive of the gameplay.

At the beginning of each Broadsides and Boarding Parties round, players secretly place 3 movement cards facedown on their side of the board. The cards are simultaneously revealed, and then the ships make their moves. Cards can be either forward, turn starboard, port, or drop anchor and remain in place. If the ships get within 1 space of each other at any time during this movement, both players can fire upon each other. 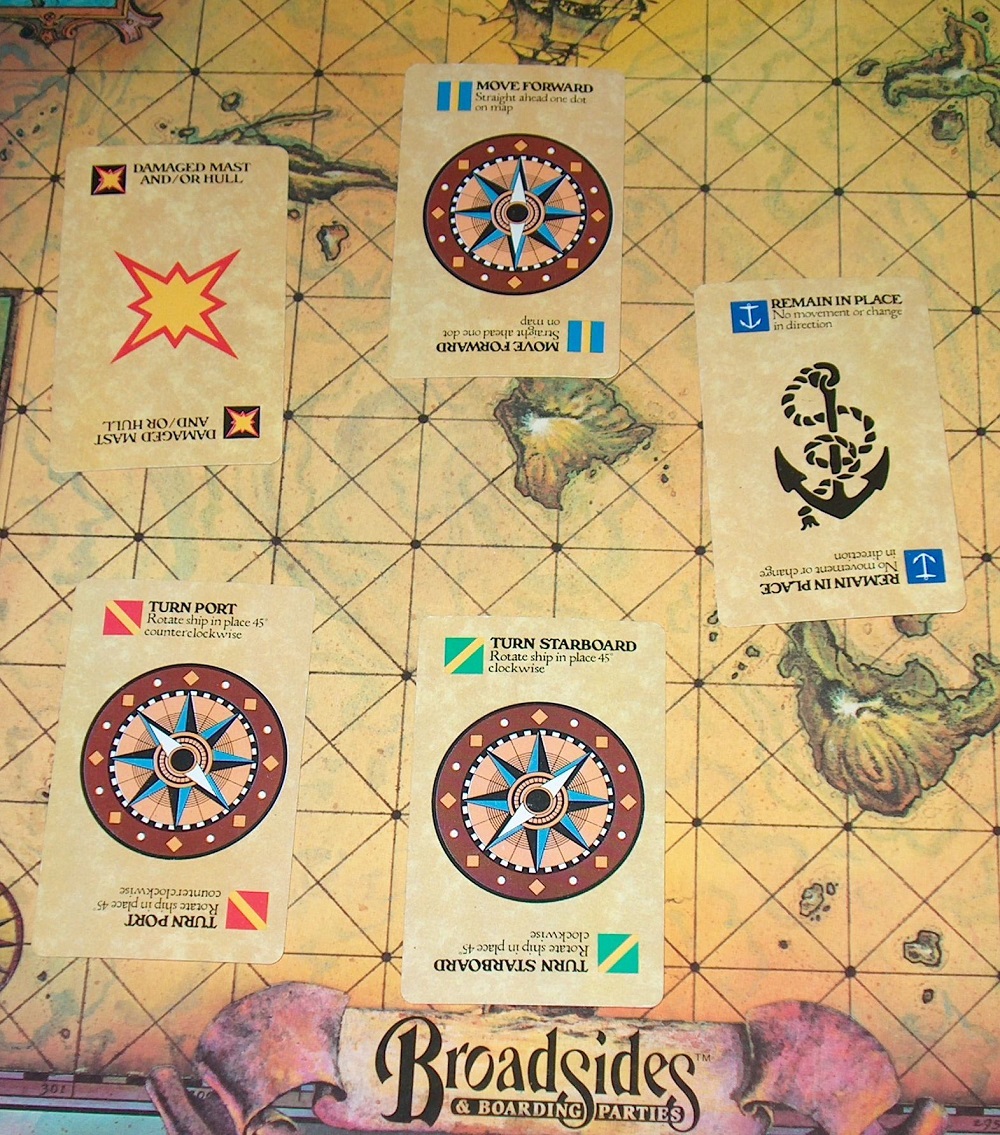 Each ship is broken into different sections and certain cannons can only fire in certain directions. So your forward guns are able to fire in the space 45 degree forward and to the side. Same with your aft guns.

And of course, being alongside a ship allows for broadside fire, which is firing all cannons. When firing on the enemy ship, choose your ship section to fire upon and roll a die. The roll determines if and where you’ll hit the other ship. 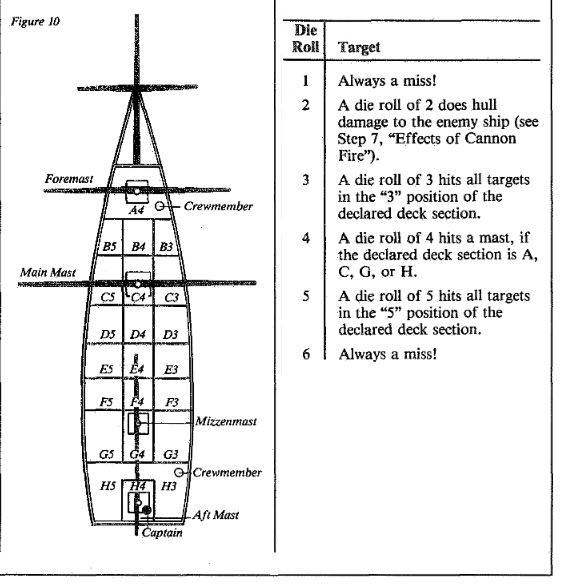 Any crew and cannons hit are lost. If a mast is hit, it’s destroyed. But the main mast requires 2 hits. If a section of hull is hit twice, it’s been breached.

Each time a mast is destroyed or a section of hull breached, the player places a Damage card on their movement track. This means they’ll play one fewer movement cards during the movement phase.

If a ship has 3 Damage cards, it sinks and the game is over. So before that happens, players had best get to boarding! 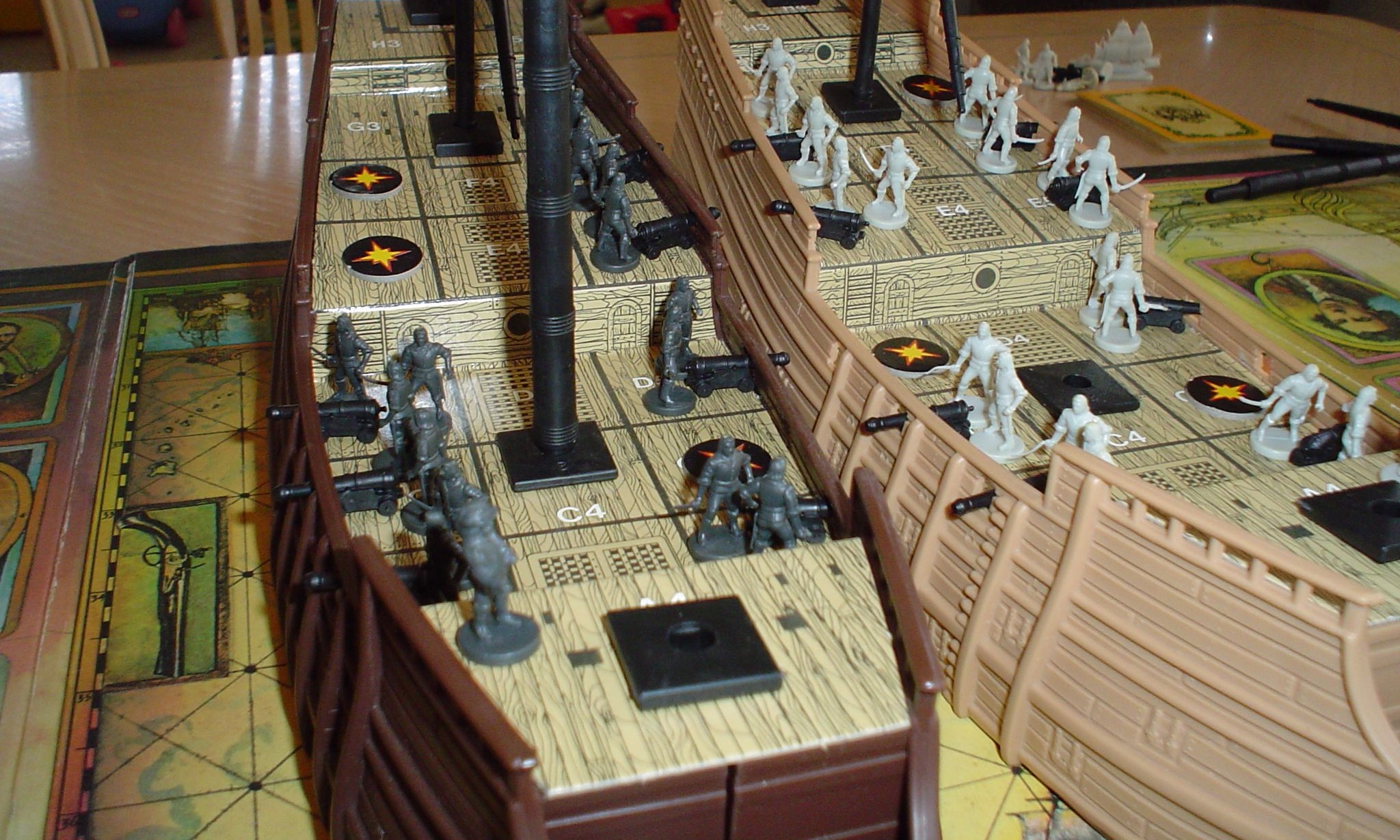 This can be very useful. The goal of Broadsides and Boarding Parties is to kill the opponent’s captain, so ramming another ship in a way that puts a majority of your crew close to the enemy captain is an easy way to gain an advantage. 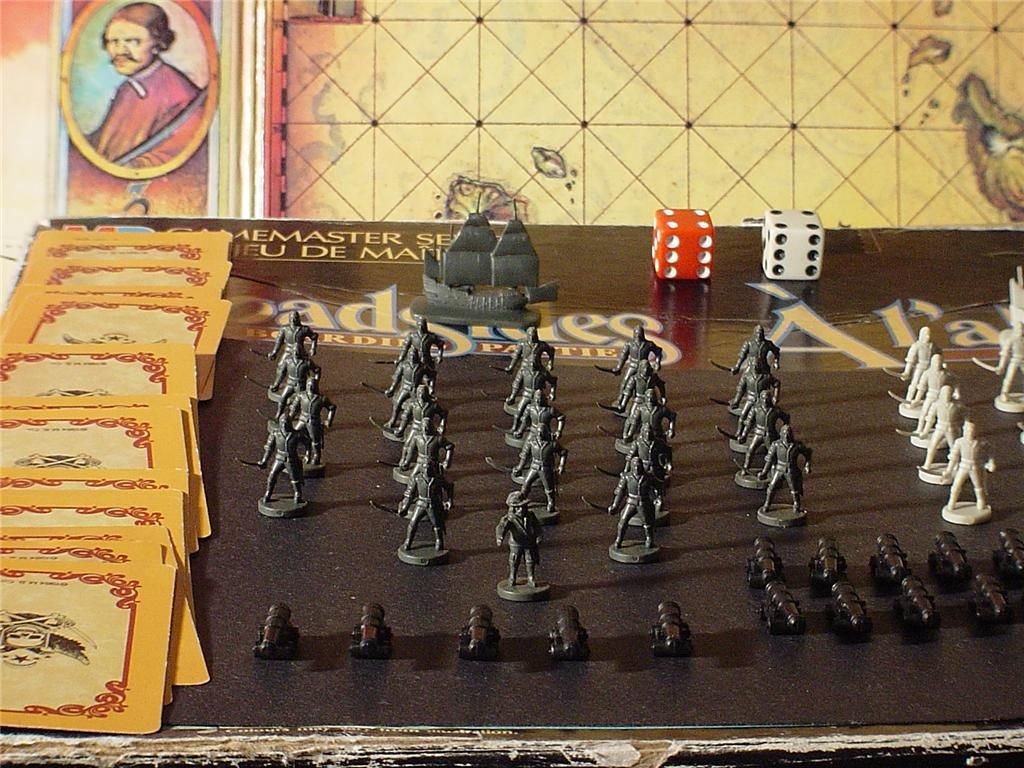 If the game has entered the Boarding Parties phase, the only way to win is to eliminate the enemy captain. First player to do that wins the game and can take their new ship as a prize! Then it’s rum all around for the winners!

But Does Broadsides and Boarding Parties Deliver the Booty?

Maybe I’m biased. After all, I never really grew out of the pirate phase of the early 2000s. But the theme of Broadsides and Boarding Parties really sold me on the game.

If it were just another land-based wartime board game, it would be cool, sure. But I wouldn’t be as into it as I am now. I love how the game is broken up into the two separate phases, but they are both equally important. Heck, maybe the Boarding phase never even happens!

Like any dice game, Broadsides and Boarding Parties is based on randomness. But the strategic movement does allow for a good amount of thinking and planning.

Again, this is a game that was designed for kids. So I wouldn’t want nor expect any deep, complex logistics to be required here. Overall, Broadsides and Boarding Parties is a deeply thematic and fun game that anyone can enjoy.

Check out more of our board game reviews for more fun for your next game night!

Author: Matt Sall
Matt has loved games of all kinds his whole life: board, video, war, roleplaying. He's worked as a writer for BoLS since 2017. He's worked as freelance editor for board game rulebooks and has designed many of his own games as well.
Advertisement
Board Games Game Design How to Play Retro Games Tabletop News
Advertisement 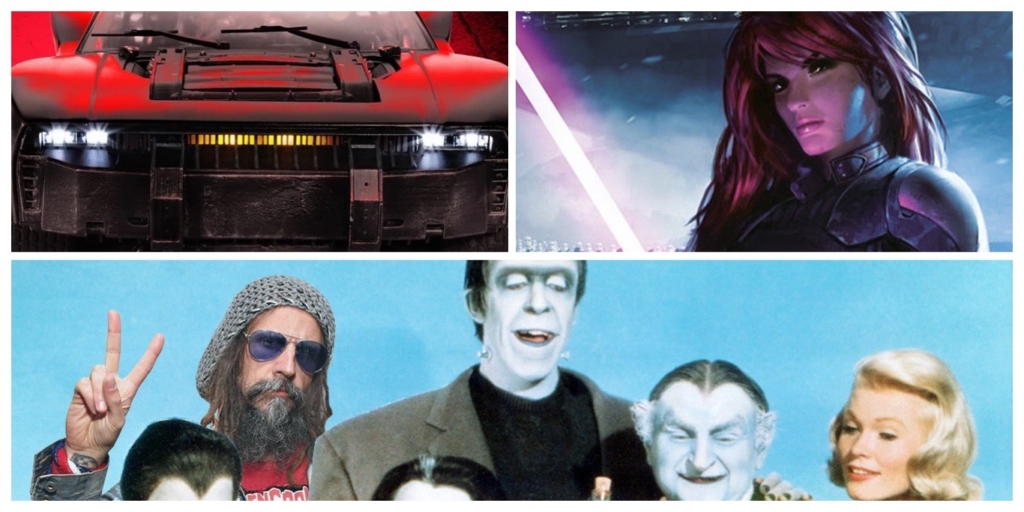