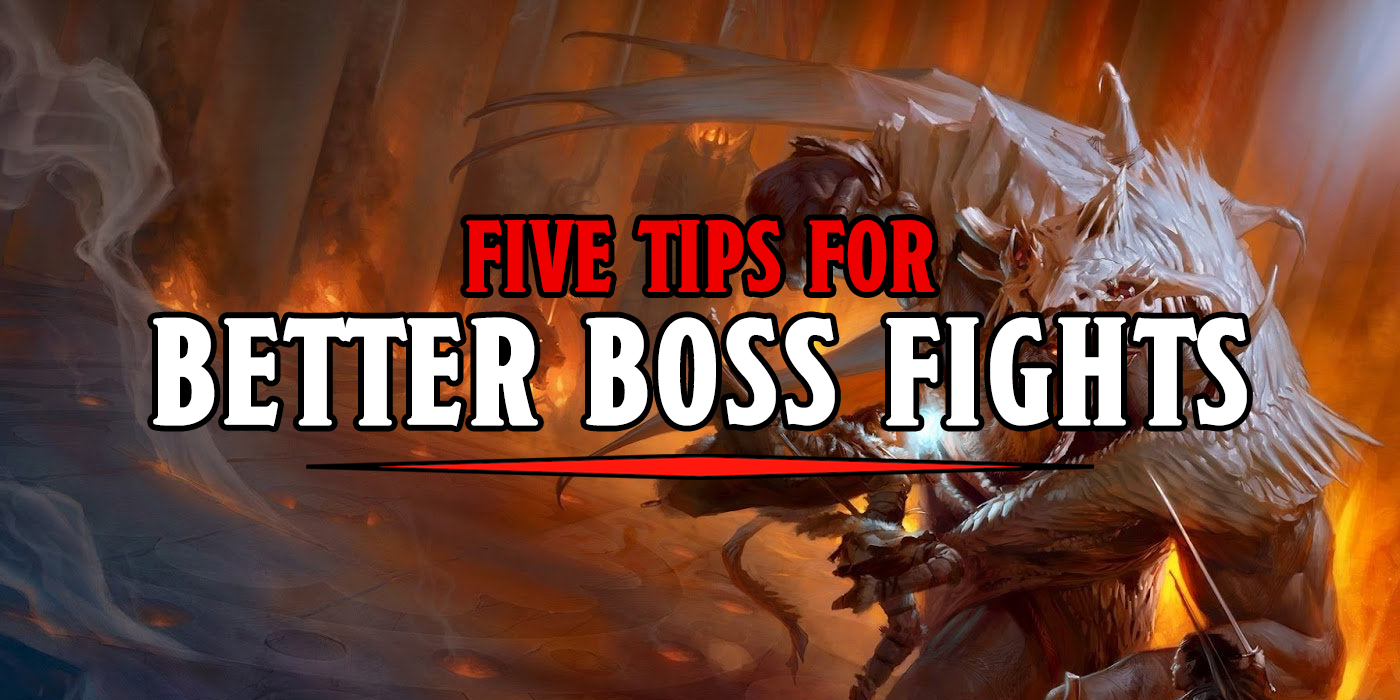 Parties killing the villain in round one. Fights turn into a heavy slog. Running boss fights in D&D is hard. We’re here to help.

Running a boss fight is hard in D&D. You go to all the trouble of designing an awesome monster and your players show up ready to break the game wide open and either kill it in a round, or else make it impossible for their characters to be threatened. Or worse, when that climactic moment shows up, everyone tunes out while you’re trying to have your villain deliver a monologue about how they’re all doomed.

We can’t help the way that the dice fall, but we can help make your boss fights feel as climactic as they deserve, both mechanically and narratively. But in order to do that we need to figure out what makes a good D&D boss fight in the first place. Now, there are countless articles out there across different media that break down boss fights, from movies to video games, even storytelling. You can go look up some of these for yourself (I’ve linked them at the end), but we’re going to talk about a few basic principles that feel the same whatever the media, from that video game boss you’ve died thirty-seven times on, to an epic throw-down that takes three episodes of your favorite anime. Those same principles apply to tabletop roleplaying games too.

If there’s one thing you take away from this article, it’s that a boss battle should feel different from a regular encounter. And I don’t just mean varying up the number of opponents or the amount of hit points/damage they do. Stepping into a boss fight is stepping into a world all its own–at least that’s how it should feel. We’ve talked before about ways to level up your encounter design, but in a nutshell:

You want to signify to your players that there’s something different about this fight. And the mechanics should reflect that. Usually encounter design can be quick and pretty lazy, but if there’s one place to put in the work, it’s where the climactic moments happen.

Set the Stage For Your Boss Fight

Now that you’ve made an encounter that stands out from the daily grind, it’s time to get players excited about it. A boss fight is a reward for your players, and for you. It’s a treat that everyone gets for making it to the end. It’s a chance to show off, so you’ve got to hype it up. Like a WWE match, you’ve got to cut some promos.

Other media have this happen all the time. Whether it’s the brief encounter where the party catches the villain just after finishing some heinous act, and the villain taunts them before dashing away, or moments where you fight minions at the behest of the boss. You want to give your boss a chance to catch some heat, to basically loom large as a threat or a taunt to the players. You want to let them know that they’re in for a different fight too.

If your boss has some special powers, now’s the time to foreshadow it.

If you want your players to do something different, you’ve got to foreshadow that as well. Maybe they’ve been using Arcana to break special wards on doors–a skill they’ll use to bypass the villain’s own magical wards making them vulnerable for attack in the epic duel. Or maybe they’ll learn that Nature can help identify which of the plants in the villain’s lair are toxic to lycanthropes, etc. Let the players know both in and out of character, that something cool is coming.

Let Your Boss Have Time to Shine

A boss fight is a reward for the table–I can’t repeat that enough. It’s a chance to really challenge the players, but it’s also a chance for them to feel like they’re at their best. They’re already doing things outside the norm, now’s the time to draw on whatever strengths you know they have. Here’s where it helps to know exactly what your party consists of. If you know you have a Barbarian who loves to rage, amp that up in the boss fight.

Because the dirty secret about boss fights is that we all want it to feel challenging, but we also want to feel like this is a chance to demonstrate our mastery of the game, of our characters, of the story. That’s it. That’s why there are so many guides out there for building characters that can do 100+ damage a round without breaking a sweat, and why higher level play is so hard. Boss fights are a test, but they’re also a reward.

And we can make each boss fight feel like a chance to think creatively. If you know the players have a bunch of random magic items, you also know they’re going to be looking for an opportunity to use them every chance they get. Now’s the time. You want the smites to feel smitier–but you also want the villain’s blows to feel more dangerous. Everything should shine, both the danger and the delight.

A boss fight is also a story. It should have its own beats, its own rhythms. Every good fight has a pace all its own. The best ones mirror the rise and fall of the tension in the story. But we aren’t worried about tightly written and expertly paced narratives–what we are worried about is making the decisions that the characters have made feel like they matter.

A boss fight is where the characters have a chance to get what they want. It’s also a chance for them to lose it all. You want to make it clear what the stakes are. It should absolutely be more than just “if you beat this boss they die.” Think about what it means if they die. And what it means if they win. A good boss fight might not even be about killing the boss–it could be about fighting an unstoppable foe and holding them off just long enough for people to escape.

Or distracting them long enough that the stellar conjunction ends and they lose the channel to their far realm master. So think about what characters stand to gain–and what they stand to lose. What does the boss have over them? If they’re breaking into a goblin fortress to fight the goblin king, why? Is it because it’s there? Or because the goblin king has stolen their baby brother and now they want him back? If they don’t defeat the boss, will any of their loved ones lose? Will the boss gain some kind of power? Perhaps the ritual is complete, and even if it doesn’t summon the eldritch god to devour the world, it empowers the enemies some how.

Win or lose, actions have consequences. And they should all center around what the players do, and what the characters want.

Every big climactic battle is soulless without considering what the characters want–and without giving the enemies a chance to interact beyond just fighting or exchanging witty banter. Fighting can do so much more than just ‘reduce hit points’. It can prove a point. A fight might be a chance for characters to argue their worldview.

When Batman and Ra’s al Ghul have their climactic encounter in Batman Begins, it’s to prove whether or not Gotham can be saved. But it’s also about proving whose worldvidew is right. All Ra’s has to do is get Batman to break his no-killing rule and he wins. His worldvidew of “sometimes you have to kill to save a city” is proven. Nevermind all the times in the movie where Batman definitely killed people.

But the point is, boss fights are a time for big ideas and grand speeches. And there’s a trope of interrupting the bad guy during a monologue:

But even when it’s being subverted, the moments in between throwing punches help give the fight the emotional weight that takes it over the top. The key is to think of attacks and defenses as much a part of the conversation as their words are. Punctuate an attack with some dialogue–or better yet, build in breaks where the characters can recover to help explore the story.

Whatever you do, put the focus on the players, and make the boss react to them (rather than looking to say some melodramatic speeches for the sake of sounding like a boss fight) and you’ll find them eager to say things back.

Here are some more resources about building a better boss fight:

The Angry GM on Boss Fights

Hope you enjoyed these tips for beefing up your boss battles. If you’d like to see more like this, please let us know–and as always, Happy Adventuring! 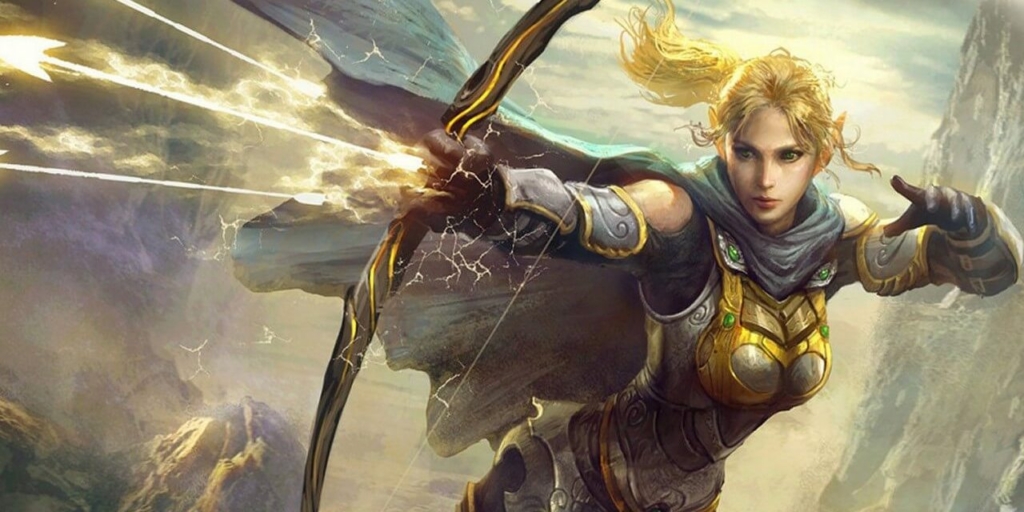